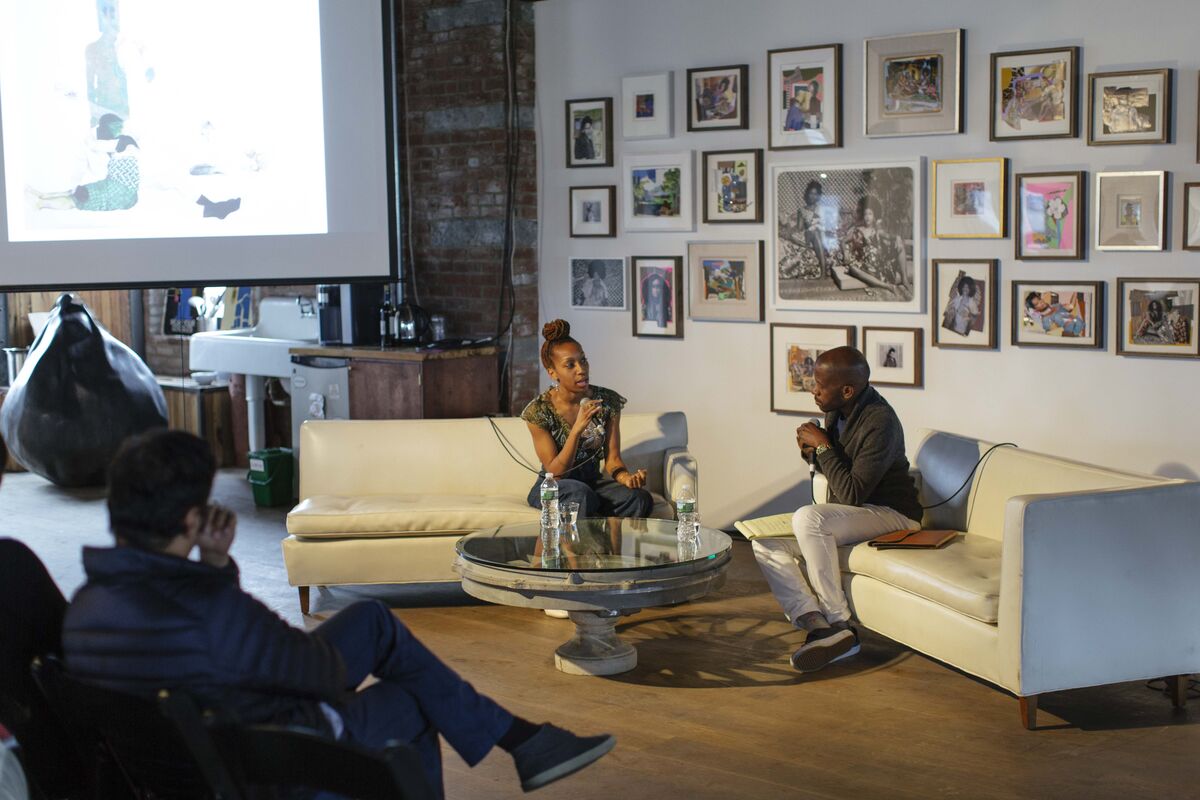 Kouoh, who has curated 1:54 FORUM since the fair’s inception in both London (2013) and New York (2015), will focus this edition on exploring some of the radical imperatives underlining African and African American artistry today. Convening a range of leading artists, performers, curators, and scholars, FORUM will unfold a spectrum of aesthetic strategies dealing with themes of temporal and material abstraction, narrativization, and transformation. The program will directly explore how artists enable us to visualize, but also mobilize new artistic communities and connections.
Koyo Kouoh says:
“This edition of FORUM will examine how strategies of resistance take shape and how a language capable of fighting back against a matrix of oppression can develop out of them; a language which rekindles the dignity and compassion of those who advocated and resisted before us; one capable of articulating a diverse set of voices and celebrating the differences between them. As systems of oppression and control contact our lives in more pervasive and affecting ways, militating against them remains critical: from addressing the new challenges presented by a volatile political climate to, as Raél Jero Salley puts it, “still-active legacies.” As artist methodologies filter into and blur academic disciplines, activist and social practices, we look to the radical traditions of artmaking in search of strategies for political liberation.”

Co-presented by Performa and 1:54, and curated by Adrienne Edwards, 1:54 PERFORMS returns for a second year with a newly commissioned special project for FORUM by Mendi and Keith Obadike. The performance program will feature Vectors (Pan Africa), a sonic work in which latitude and longitude data corresponding to African countries is translated into sound and played against spoken text. These sounds slowly pan across an eight-channel sound system, installed along the external structure and lobby of Pioneer Works.

Entry to the FORUM talks is free with 1:54 admission. No booking necessary.

2:00 – 3:00pm Keynote: Raél Jero Salley: On “Looking After Freedom”
For FORUM’s opening address, Salley discusses how “Looking After Freedom” is a way of making “we, the people.” “Looking After Freedom” means caring enough to invent more humanly workable visual, material, and conceptual resources.
Artworks provoke new forms for and of imagination. Here, Salley’s point of return is that artists (makers) are always already doing this nurturing work, and invite their viewers to join in. Creative works can mediate fundamental paradoxes that were built into contemporary politics after, during and through struggles for liberation. The struggles are not “post”—citizens find themselves struggling through present-colonialism, present-apartheid, and present attacks on civil rights. “Looking After Freedom” is therefore a shorthand for dynamic creativity that goes beyond reflecting situations of injustice, inequality, oppression, violence and the like—from merely documenting them or responding to them—toward manifesting generative tools and methods for transformation.

3:30 – 4:45pm A Slip of the Ear: Sufflating Blackness Through Sound: A Conversation with Mendi and Keith Obadike
Artists Mendi and Keith Obadike discuss with Adrienne Edwards the ways the duo’s art deploys technology, narrative structure, and dissonance in sound and space as open, disembodied experiments of blackness. While sharing details about their work Vectors: Pan Africa—newly co-commissioned by 1:54 and Performa—as well as past and upcoming projects, they delve into the significance of aural expansion, textual assemblage, and unexpected juxtapositions in their intermedia work.

1:30 – 2:30pm Thomas J. Lax in conversation with Sondra Perry
Sondra Perry, the subject of the solo exhibition Resident Evil at The Kitchen (2016) and Thomas J Lax discuss legacies of media art, the role of appropriation, and the stakes of representing violence and social protest.

3:00 – 4:15pm “I Belong Here:” Art in times of Resurgent Nationalism: Ugochukwu- Smooth Nzewi in conversation with Sadie Barnette and Odili Donald Odita
Tavares Strachan’s You belong here (2011), a 120ft x 27ft neon piece, was displayed on a barge on the Mississippi River during Prospect.3, the New Orleans biennale, in 2014. With the work, the Bahamian-born artist boldly affirmed his presence, his right to belong, to be firmly emplaced, and to be part of an American consciousness. Yet as he also explained, “to belong” is polemical and complex when considered against the history of race and immigration in the United States. In this current political climate of resurgent nativism and nationalism in the United States and around the world, how might we consider the values of Black art and aesthetics as a strategy of engagement? In this conversation with Ugochukwu-Smooth C. Nzewi, artists Odili Donald Odita and Sadie Barnette respond to the assault on “otherness,” drawing upon their creative practice, backgrounds, and individual experiences.

4:45 – 6:00pm Family Tree: An intergenerational discussion between Charles Gaines and My Barbarian, Moderated by Eungie Joo
Charles Gaines along with his son, Malik Gaines, and son-in-law, Alexandro Segade (2/3 of the collective My Barbarian) continue their 25-year discussion of the shifting terms of a shared political imaginary, considered through their artistic and academic practices. This conversation touches on how their very different practices speak to each other across generations of influence, appropriation, rejection, and transformation.

Sunday, May 7
2:00 – 3:15pm Dis/assembly: The body in abstraction: Nicola Vassell in conversation with Tschabalala Self, Marcia Kure and Derrick Adams
In a panel chaired by Nicola Vassell, artists Derrick Adams, Marcia Kure, and Tschabalala Self discuss strategies of collage and new media abstraction – both online and offline – in visualizing and celebrating blackness. Looking to their respective practices, the dialogue will consider how revisiting modernist and conceptual traditions of collage and dis/assembly make possible new aesthetic forms in an era of viral imaging.

3:45 – 4:45pm Madness of the Present: Abstraction’s Radical Possibilities: A Conversation between Adam Pendleton and Adrienne Edwards
Focusing on Adam Pendleton’s art of the past two years, from his installation for the Belgian Pavilion at the 2015 Venice Biennale to his recent suite of paintings entitled Untitled (A Victim of American Democracy), Pendleton and curator Adrienne Edwards explore abstraction as a platform for revolutionary possibilities in art and politics.

About 1:54 Contemporary African Art Fair
With semiannual editions in London and New York, 1:54 is the leading international art fair dedicated to contemporary art from Africa and its diaspora. Drawing reference to the fifty-four countries that constitute Africa, 1:54 is a sustainable and dynamic platform that is engaged in broadening contemporary dialogue and exchange in relation to the continent. 1:54 New York 2017 will showcase 19 exhibitors and present over 60 African and African diaspora artists at Brooklyn’s Pioneer Works.

About Touria El Glaoui, 1:54 Founding Director
Touria El Glaoui is the Founding Director of 1:54 Contemporary African Art Fair, which takes place semiannually in London and New York, with a Marrakech edition planned for February 2018. Born and raised in Morocco, El Glaoui completed her education in New York before beginning a career in the banking industry as a wealth management consultant. After 10 years she relocated to London, where prior to initiating 1:54 in 2013, she occupied various business development positions in the Telecom/IT industry in the Middle East and Africa. Parallel to her career, Touria has organized and co-curated exhibitions of her father’s work, Moroccan artist Hassan El Glaoui in London and Morocco. She has spoken widely and chaired numerous discussions on contemporary African art and women in leadership at international organizations. In 2016, Touria El Glaoui was listed amongst the 100 most powerful women in Africa by Forbes; amongst the 50 most powerful women in Africa by Jeune Afrique in 2015; and the 100 most influential Africans in business by NewAfrican in 2013.

About Koyo Kouoh
Koyo Kouoh is the founding artistic director of RAW Material Company, a center for art, knowledge, and society in Dakar, Senegal and the curator of 1:54 FORUM in London and New York. She was recently appointed artistic director of Fabrica de Sabao, an art & innovation initiative in Luanda, Angola. Kouoh’s theoretical, exhibition-making and production practice has contributed to a paradigm shift in global curatorial perspectives of recent years. She was the curator of Still (the) Barbarians, the 37th EVA International, Ireland’s Biennial in Limerick (2016) and is the initiator of RAW Académie, an international study programme for artistic research and curatorial enquiry in Dakar. She lives and works in Dakar, Luanda and Basel.

Through a broad range of educational programs, performances, arts and science residencies, and exhibitions, Pioneer Works seeks to transcend traditional disciplinary boundaries, foster community, and provide a space where alternative modes of thought are supported and activated in tangible ways. The organization was founded in 2012 by artist Dustin Yellin and is located in a 25,000-square-foot manufacturing warehouse in Red Hook, Brooklyn. After an extensive renovation, the facility now houses artist studios, exhibition and performance spaces, a science lab, a recording studio, and other spaces as needs arise. The floor plan is open and flexible, encouraging a transparent, collaborative environment where international artists, musicians, scientists, and educators can co-exist and create together.