Why Artists Have Been Enchanted by Witchcraft for Centuries 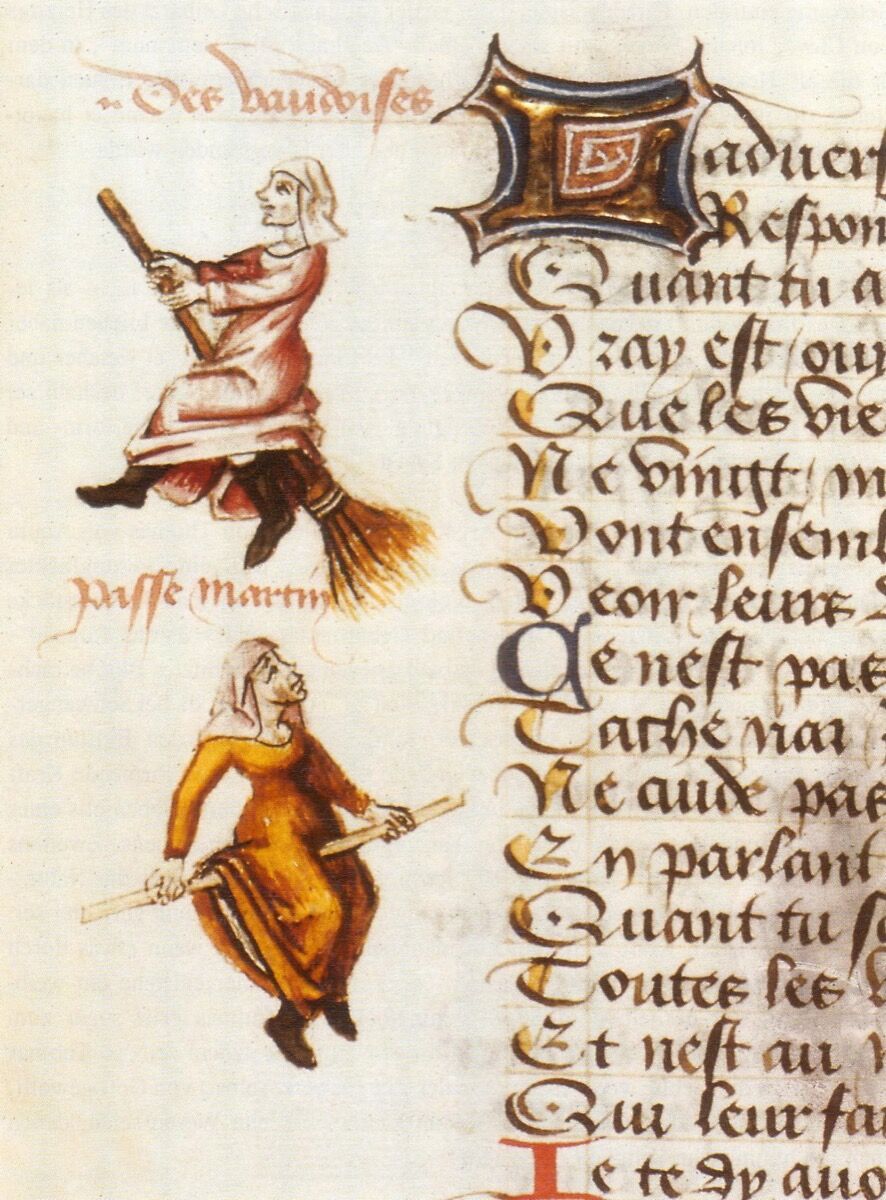 The history of witchcraft in Western art is a tale with a dramatic plot twist. Throughout the 1400s, witches began appearing in European illustrations and woodcuts as demonic creatures with deviant sexual habits: Broomsticks were stand-ins for phalluses, and nude women rode backwards on goats. Throughout the next 400 years, around 80,000 Europeans—80 percent of them women—were killed for alleged witchcraft. Their “crimes” ranged from causing male impotence to damaging property and worshipping Satan. In the 1800s, occult spirituality was suddenly back in vogue. Women began reclaiming sorcery for themselves, in both their lives and their art.
Fast forward to 2019: Witches are alive and well, from Bucharest to Los Angeles. They’re casting spells, making enchanting artwork, and cursing world leaders. It’s certainly an improvement from the days of witch burnings, but gender inequality is still evident in contemporary spiritual and aesthetic practices. Ideally, women would have enough power and influence to make magical activity redundant. By tracing the history of witchcraft in art, we reveal just how far we’ve come—and how far we still have to go.

Early-modern wicked witches of the West 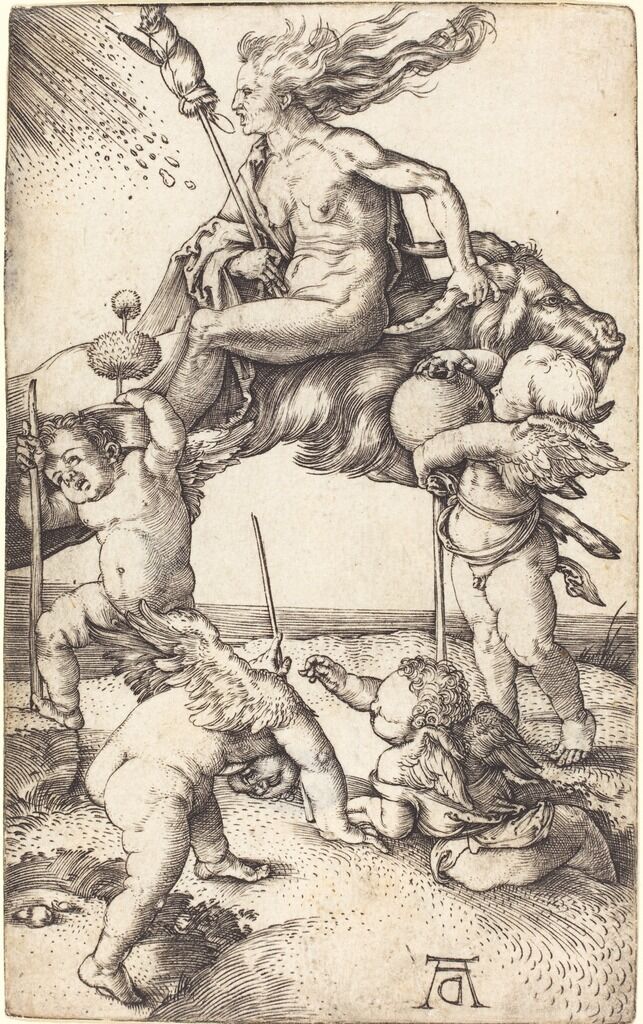 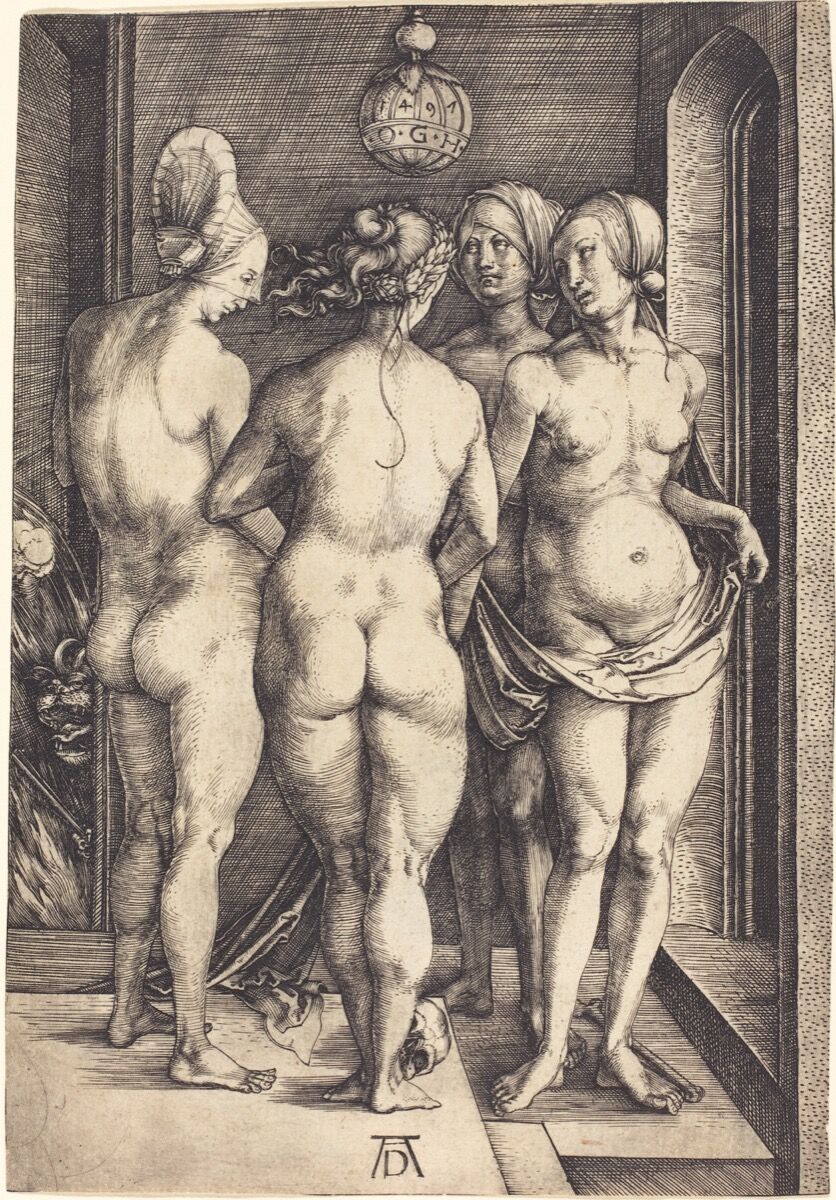 The first known Western artwork depicting witches on broomsticks appears in an illustrated manuscript of a poem, “Le Champion des Dames” (1451), by French writer Martin Le Franc. To the left of Le Franc’s calligraphic text fly two women in long dresses—one pumpkin-hued, the other the color of a carnation. Light cloths cover their hair, and they look up towards the sky. They’re labeled as “Waldensians,” hailing from an ascetic Christian sect. French lore derided the group as heretical, imagining that its women flew through the sky on twig brooms.
“Some of the most powerful images of the diabolical nature of witchcraft produced in the fifteenth century depicted witches as part of a group, and were shaped by contemporary notions of heresy and apostasy,” wrote Charles Zika in The Appearance of Witchcraft (2007). Heretics, of course, were more frightening in large numbers, as they created a more significant threat to the status quo. If one witch was scary, a flying coven was downright terrifying. 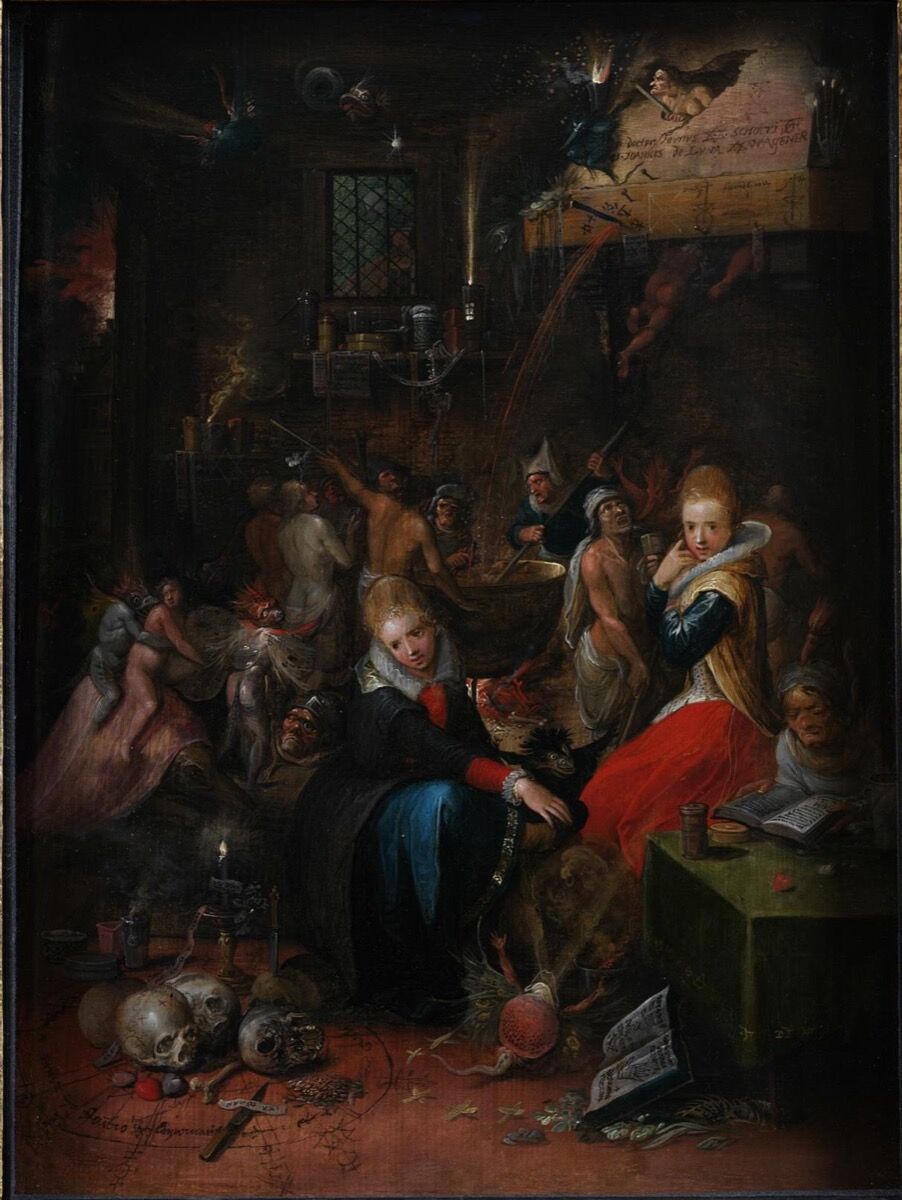 Frans Francken the Younger, Witches' Sabbath, 1606. Courtesy of the Victoria and Albert Museum.

Advertisement
German artist
Albrecht Dürer
’s famous prints of witches followed this model. His engraving The Witch (ca. 1500) features a nude figure: The titular character has long, wavy hair; a muscular physique; and breasts. Small, winged boys surround the witch, as though worshipping her. The Four Witches (ca. 1497), another Dürer engraving, depicts a tidy, symmetrical coven of four nude women.
Charlotte-Rose Millar, a research fellow from the University of Queensland, noted that some of “the most gruesome and evocative witchcraft images” come from Dürer’s homeland of Germany. That’s not surprising, she said, “given that 50 percent of witchcraft executions took place in the Holy Roman Empire, a large geo-political unit including Germany.” 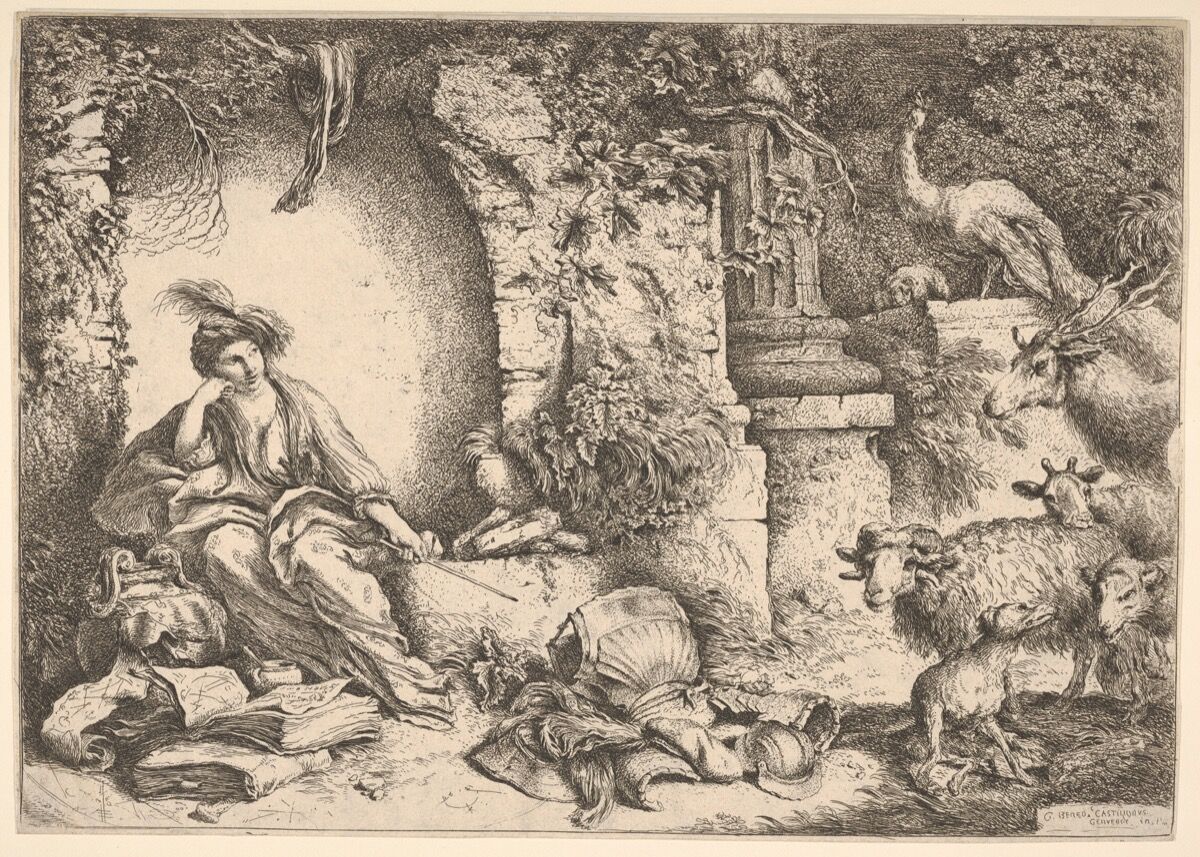 Giovanni Benedetto Castiglione, Circe changing the companions of Ulysses into beasts, 1650–1651. Courtesy of The Metropolitan Museum of Art.

Millar pointed out an ironic dichotomy in early-modern witchcraft imagery: Witches were either young and seductive or old and haggard. The former group could supposedly join with the devil to make men lose control of their senses, while the latter, post-menopausal group offered no financial or reproductive benefit to the men who controlled society. In 1487, German clergyman Heinrich Kramer produced the best-known treatise on witchcraft, Malleus Maleficarum, which spurred the prosecution of witches and the persecution of women at large.
To protect themselves from witches, Europeans created “witch bottles” full of human hair, urine, and nail clippings, then placed them around their homes. Such objects went on view at the Ashmolean Museum in Oxford last year in its “Spellbound” exhibition, turning these fetish objects into aesthetic relics in their own right.
Throughout the 17th century, witch depictions ranged from classical allusions to satanic scenes. Italian artist
Giovanni Benedetto Castiglione
etched the sorceress Circe turning Odysseus’s companions into beasts. Belgian artist Frans Francken the Younger imagined a witches’ sabbath with a group of women huddled around a book. While the tome is ostensibly full of spells, the message is clear: Beware a group of literate, independent women. 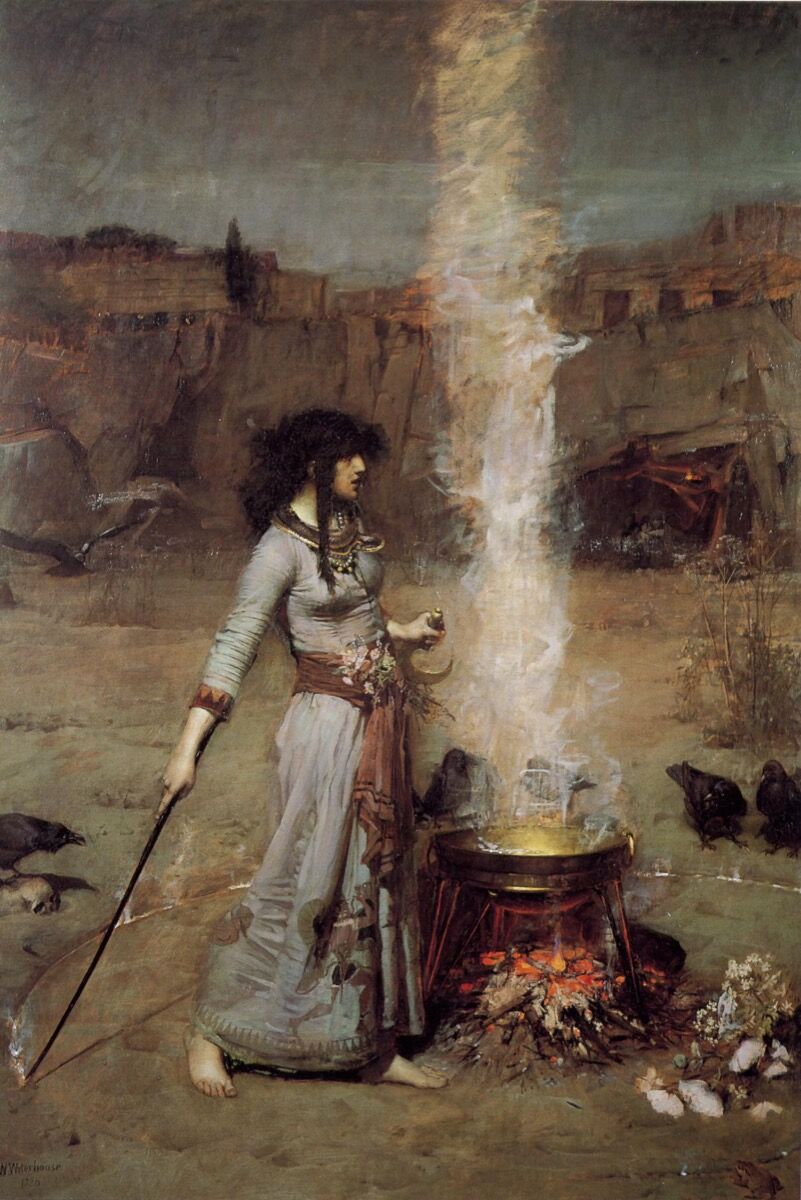 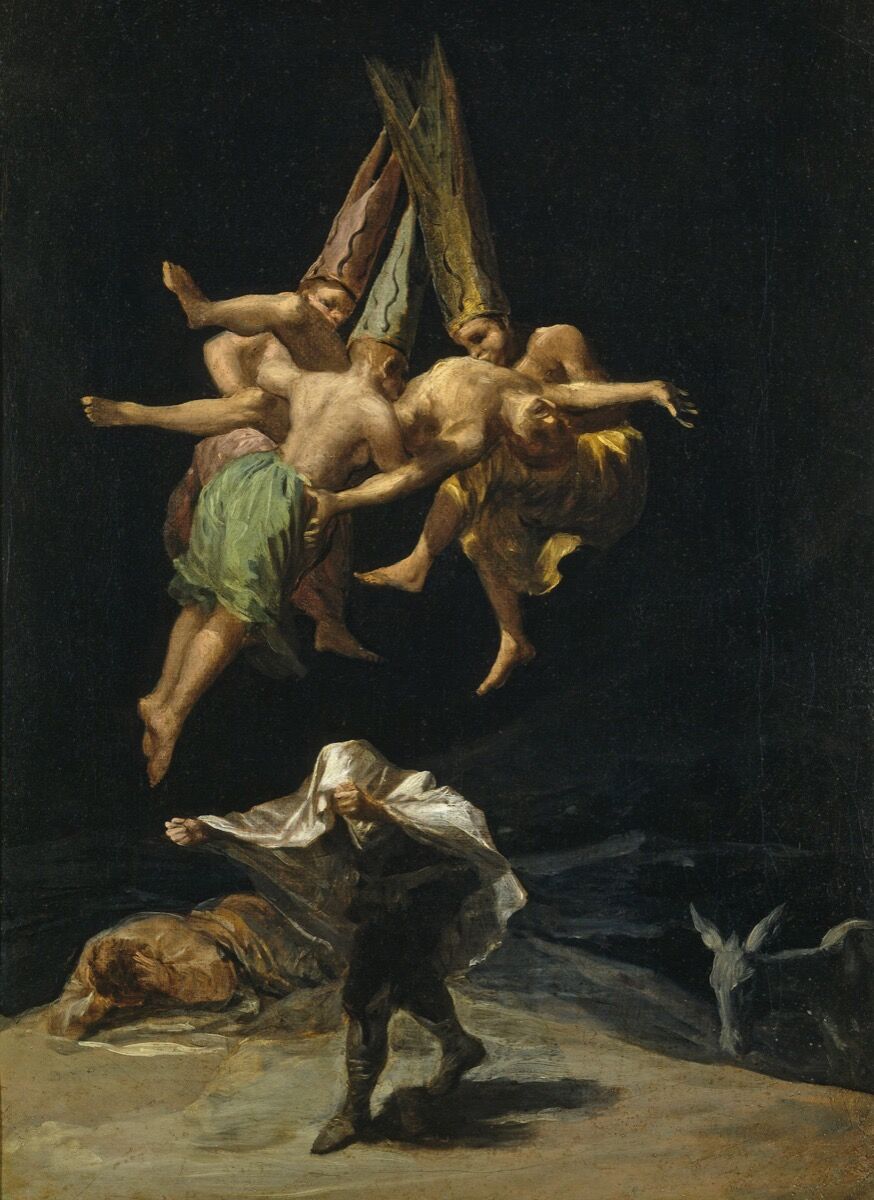 The biggest difference in representations of witches after 1750, according to Millar, is that people stopped believing in the magical creatures. Witch hunts had mostly stopped by the early 1700s. By 1750, all European countries besides Switzerland had decriminalized witchcraft. Depictions of witches from this era, said Millar, “don’t carry the same fear and repulsion as some of the much earlier images.”
Throughout his career in the late 1700s and early 1800s, Spanish painter
Francisco de Goya
interpreted the witch trope for himself, creating canvases that featured witches’ sabbaths and covens. He frequently used violent images to protest societal ills; his witch canvases may have been digs at superstition and paranoia as the Spanish Inquisition raged until 1834. Yet 19th-century European witch depictions didn’t always exhibit anti-establishment tones. British painter
John William Waterhouse
’s The Magic Circle (1886) is an enchanting picture of a barefoot woman circling a cauldron amid sandy ruins, a composition more exotic than critical. 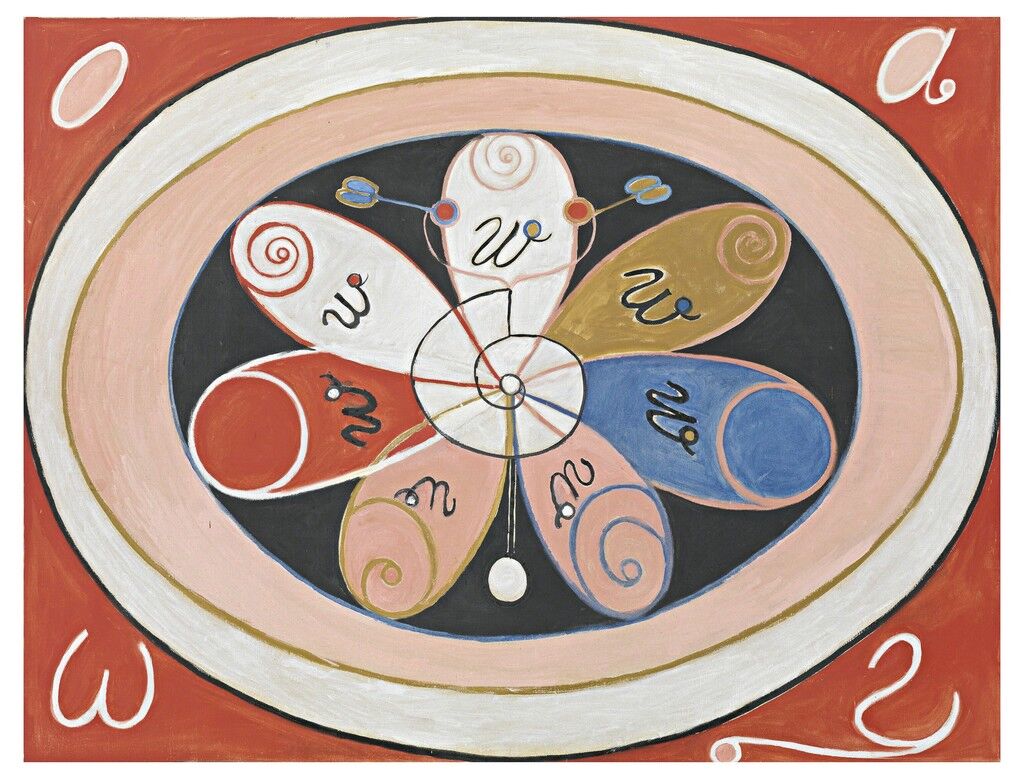 Hilma af Klint
Group VI, no 15. Evolution Series WUS, Seven Pointed Star, 2018
CFHILL
In subsequent centuries, artists have invoked the symbol of the witch for their own brand of protest and aesthetic expression. In the 1800s, two women embraced witchy spirituality—and made major art-historical advances. British artist Georgiana Houghton (born in 1814) made “spirit drawings,” or layered watercolors with swirls of colors. Swedish painter
Hilma af Klint
(born in 1862) attempted to contact spiritual beings through her hundreds of lush, balanced canvases.
“An interesting thing happens when women wield the creative wands, whether in the form of pencils or paintbrushes: they materialize their own magic, and become witches of a sort themselves,” wrote curator, educator, and self-proclaimed witch Pam Grossman in the book Waking the Witch (2019). Through their own witchiness, Grossman noted, af Klint and Houghton became two of the world’s first abstract painters, beating
Piet Mondrian
,
Wassily Kandinsky
, and
Kasimir Malevich
“to the punch.” 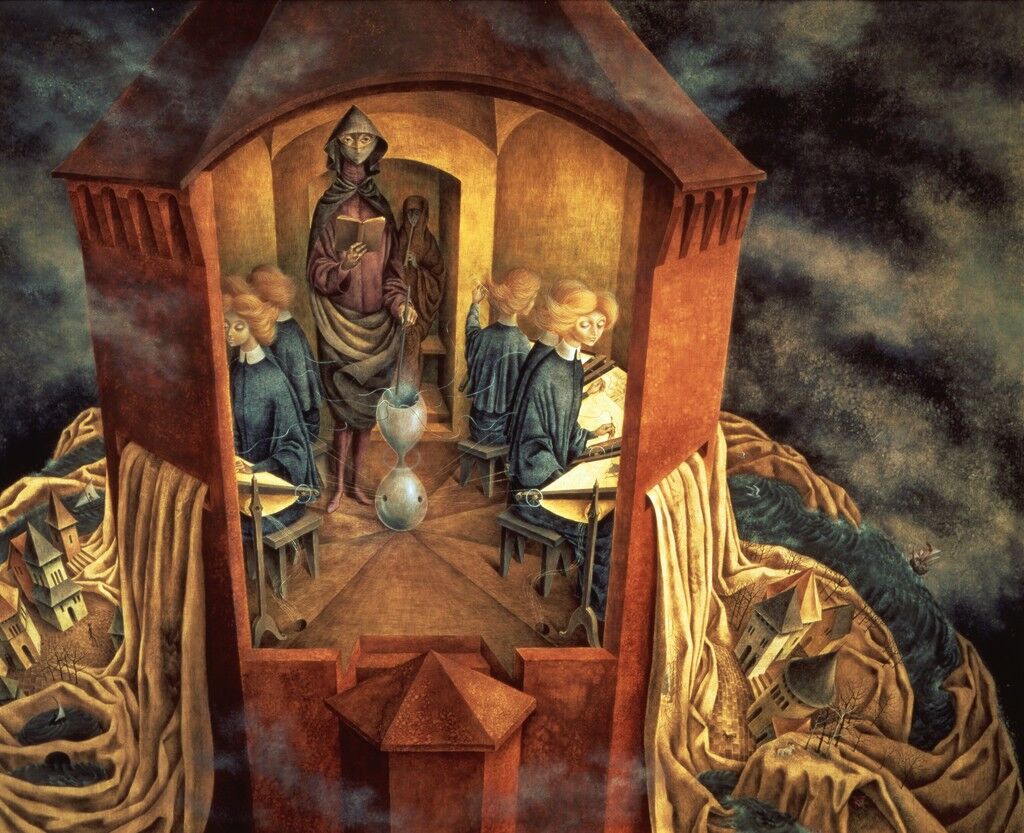 Remedios Varo
Bordando el manto terrestre (Embroidering the Earth's Mantle), 1961
Gallery Wendi Norris
While they worked in figuration,
Surrealists
Leonora Carrington
and
Remedios Varo
might be considered the spiritual heiresses to af Klint and Houghton. Both women fled Europe as fascism infiltrated the continent in the early 1900s. In addition to fleeing the Nazis, Carrington had also suffered a mental breakdown and a dramatic failed relationship with artist
Max Ernst
. Taking control of their own destinies, the two women made striking canvases filled with powerful, witchy characters. Varo painted autonomous women in towers and a glowing orange lady, floating through a dull brown corridor. Carrington took inspiration from a witches’ market in Mexico City, where she lived out her last decades. “In Mexico City, Varo and Carrington met up nearly every day and exchanged ideas about magic, consciousness, and spirituality,” wrote Grossman. 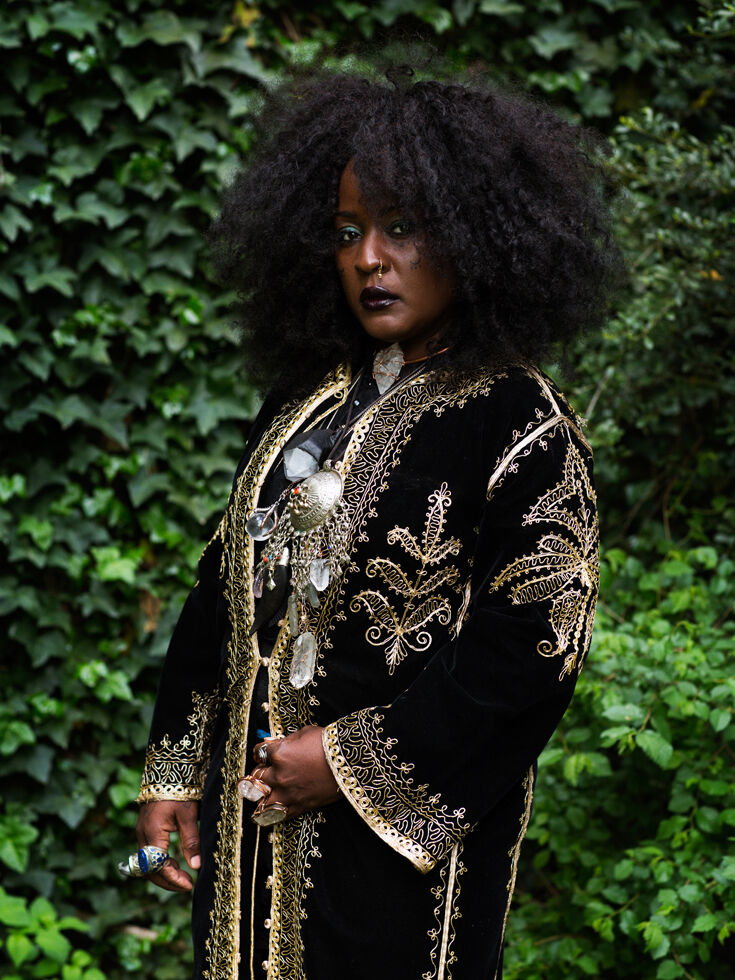 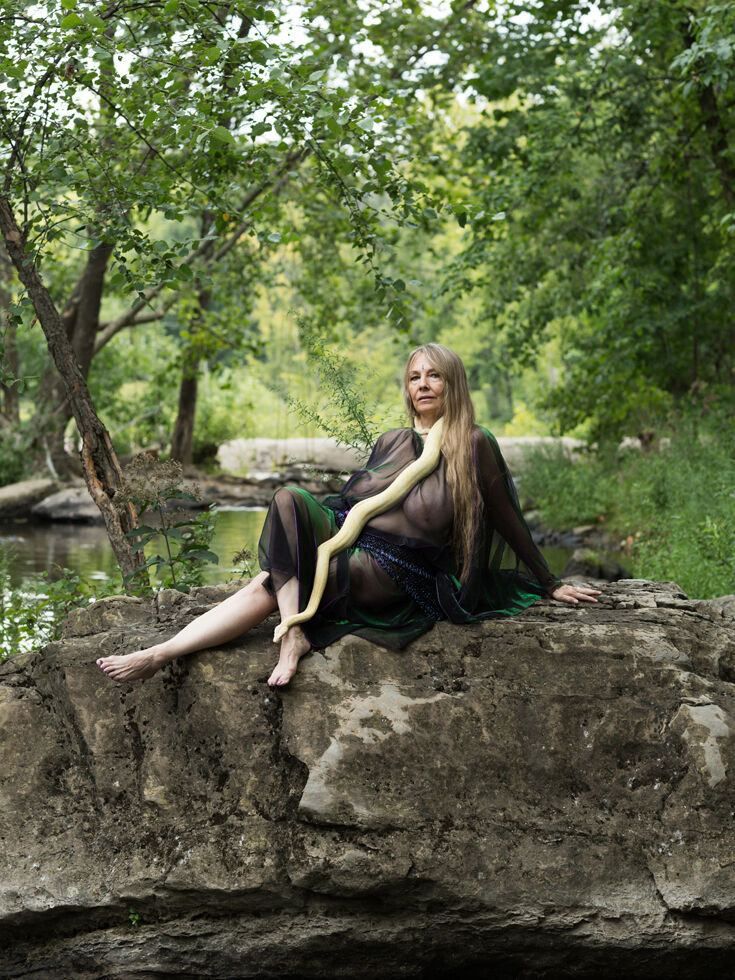 Frances F. Denny
Serpentessa (Esopus, NY), 2017
ClampArt
Today, contemporary artists interested in witchcraft have also relished in the communal benefits of spirituality. For her recent photo series “Major Arcana: Witches in America” (2016–17), photographer
Frances F. Denny
traveled across the United States to capture women who consider themselves witches. The series as a whole suggests a nationwide network of spiritualists and activists with shared goals and rituals. Across the Atlantic Ocean, photographer
Virginia Lupu
has captured Romanian witches who, as a group, perform spells for both romantic and political purposes.
In 2017, Kristen Dodge mounted “Witches,” an exhibition at her gallery September in Hudson, New York. Each of the five artists in the show—Marjorie Cameron,
Anna Betbeze
,
Laurel Sparks
,
Rosy Keyser
, and
Marianne Vitale
—has invoked magic in their work. Dodge, like Grossman, sees a natural affinity between artmaking and witchcraft. Being an artist, Dodge said, is “an act of rebellion fueled by a will to take risks (subtle or grand) both in their practice and in the cultures at large. Witches are subversive. They don’t subscribe to popular modes of behavior and belief systems,” and have been seen as societal threats. Artists and witches have always been outsiders. 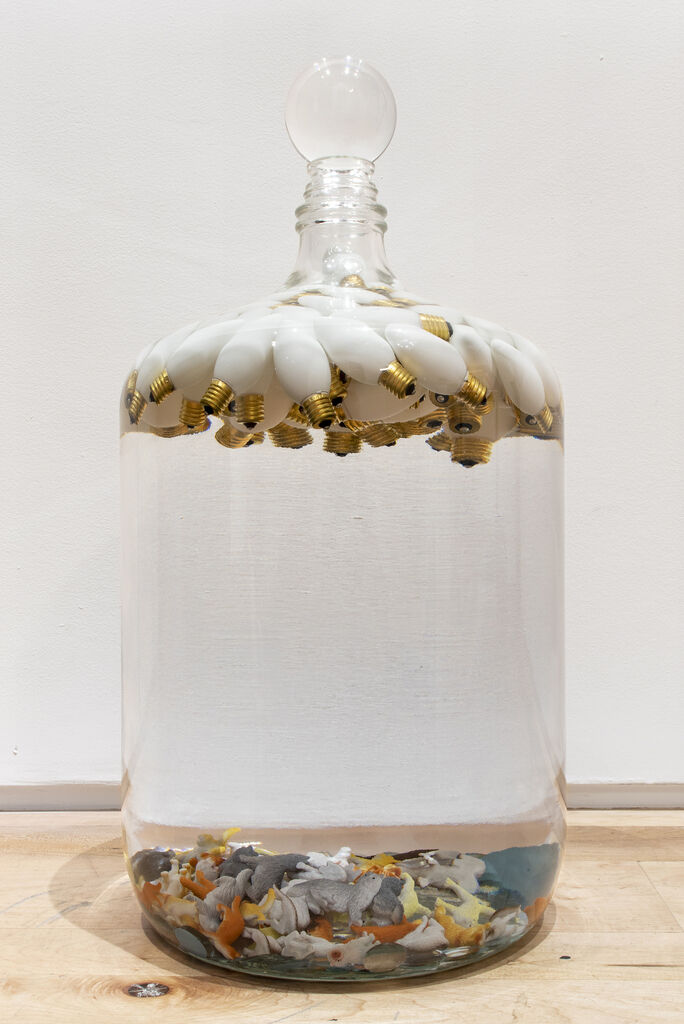 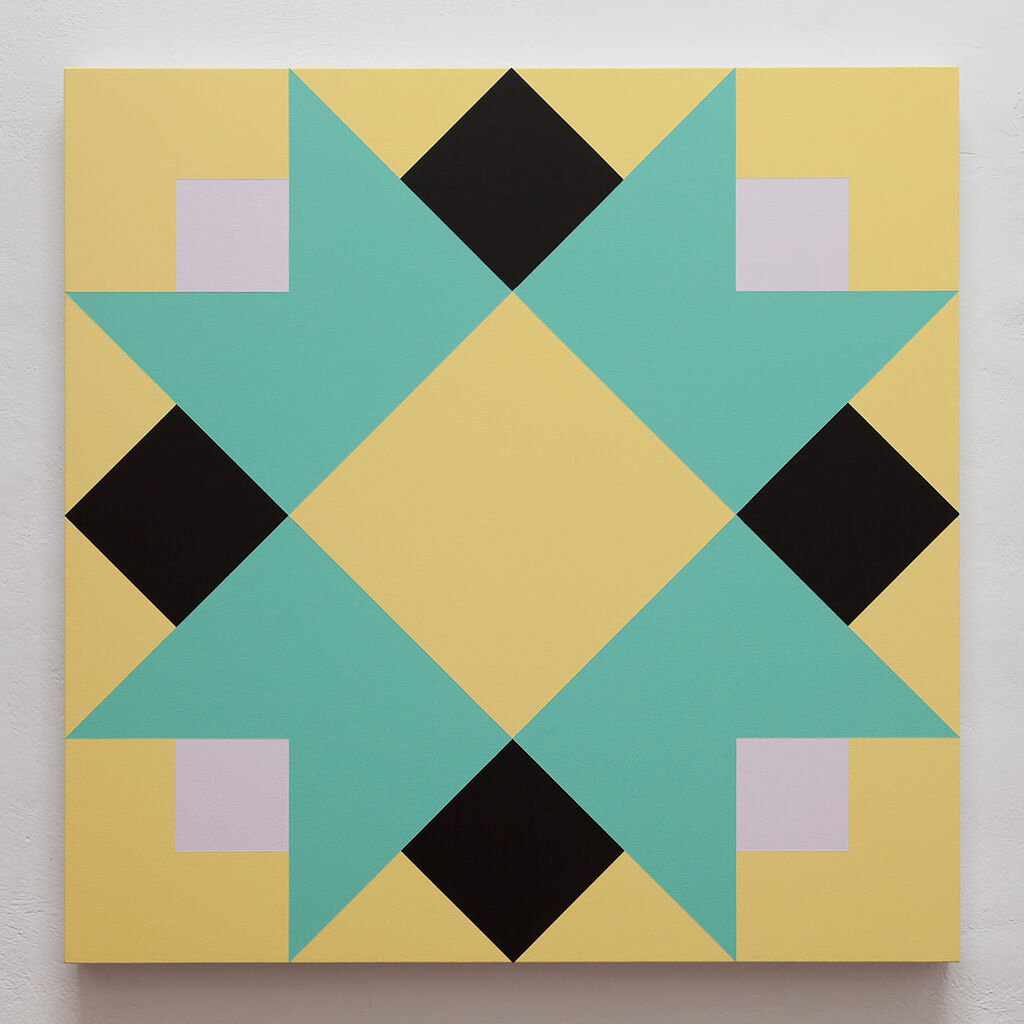 L
Hex 23, 2018
Denny Dimin Gallery
Dodge sees a recent rise in witchcraft as a popular subject in art. “It makes sense as an antidote to this constrictive, isolationist environment that we live in under the ‘leadership’ of our (for now) sitting president,” she said. It can’t hurt to cast an impeachment spell or two.
Non-female identifying artists, too, are taking up the witchy charge. The artist known as
L
has shown “spells” at galleries including Denny Dimin, Team, Marlborough, and the Newsstand Project. They fill glass sculptures with mineral oil, in which objects such as flowers, miniature basketballs, and lightbulbs either float or sink. Each makes explicit an assumption underlying all artwork: that an object made by an artist possesses a unique, ineffable power that can, at its very best, change your life.
Alina Cohen
Related Stories