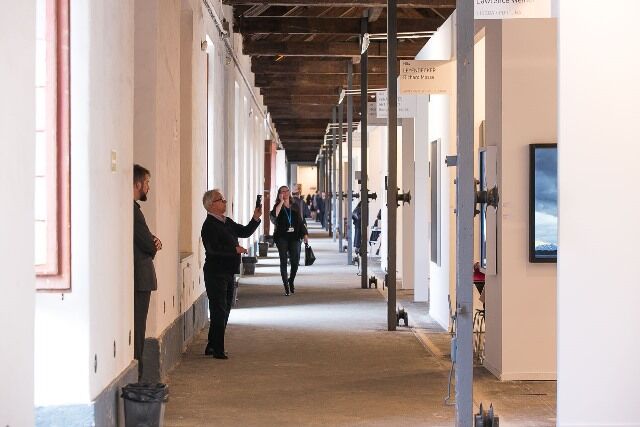 Following the success of ARCOlisboa’s first edition, the International Contemporary Art Fair of Lisbon returns with high expectations to its venue in the Cordoaria Nacional. This second edition, organised by IFEMA, will take place from 18 to 21 May.
Quality contents and galleries focusing on projects of a high standard will once again convert ARCOlisboa 2017 into the Portuguese capital’s major art and social event. In addition to the attractions of the Fair, an important art and cultural programme will take place in the city, awakening the interest of international collectors, renowned professionals and the general public.
On this edition, the General Programme will include 50 galleries selected by the Organising Committee after analysing all the projects submitted, over half of which are foreign. The most important galleries in Portugal will be represented. From Lisbon there will be Cristina Guerra, Pedro Cera, Vera Cortês, and from Oporto, Murias Centeno, Quadrado Azul –both with branches in the capital-, Fernando Santos and Pedro Oliveira, in addition to other interesting projects from Braga - Mario Sequeira- and the Azores - Fonseca Macedo-. Foreign participation will also be significant, with galleries such as Elba Benítez, Juana de Aizpuru, Giorgio Persano, Vermelho, Monitor and Zak Branicka, among others.
Lisbon is consolidating its reputation as a preferential destination for interesting projects from galleries all over the world deciding to open their main or second branches in the city. This reality is reflected in the foundations of the new Opening section. A programme that will enjoy the participation of 8 international and national galleries that are less than seven years old, selected by the Portuguese writer and curator, João Laia. Hence, the section will show a representation of the young Portuguese gallery scene with Madragoa and Pedro Alfacinha, in dialogue with international counterparts such as Dürst, Britt & Mayhew or José García.
Thus, the scope of the Fair will range from the emerging artists represented in Opening such as Renato Leotta or Karlos Gil to creators of international repute such as Erwin Wurm, José Pedro Croft, João
Share
../../../components/articles_grid/view.coffee