The Zentralarchiv des Internationalen Kunsthandels (central archive of the international art trade) (ZADIK) celebrates its 25th anniversary in 2017. Prof. Günter Herzog, scientific head of the institute since 2002, is the recipient of this year's ART COLOGNE Prize. The prize, endowed with 10,000 Euros, honours exceptional performances in the communication of art and is awarded jointly each year by the German association of galleries and art dealers (BVDG) and Koelnmesse on the occasion of ART COLOGNE. The prize will be awarded in the presence of invited guests on Wednesday, 26 April 2016 at 10:00 a.m. in the historic city hall of Cologne. 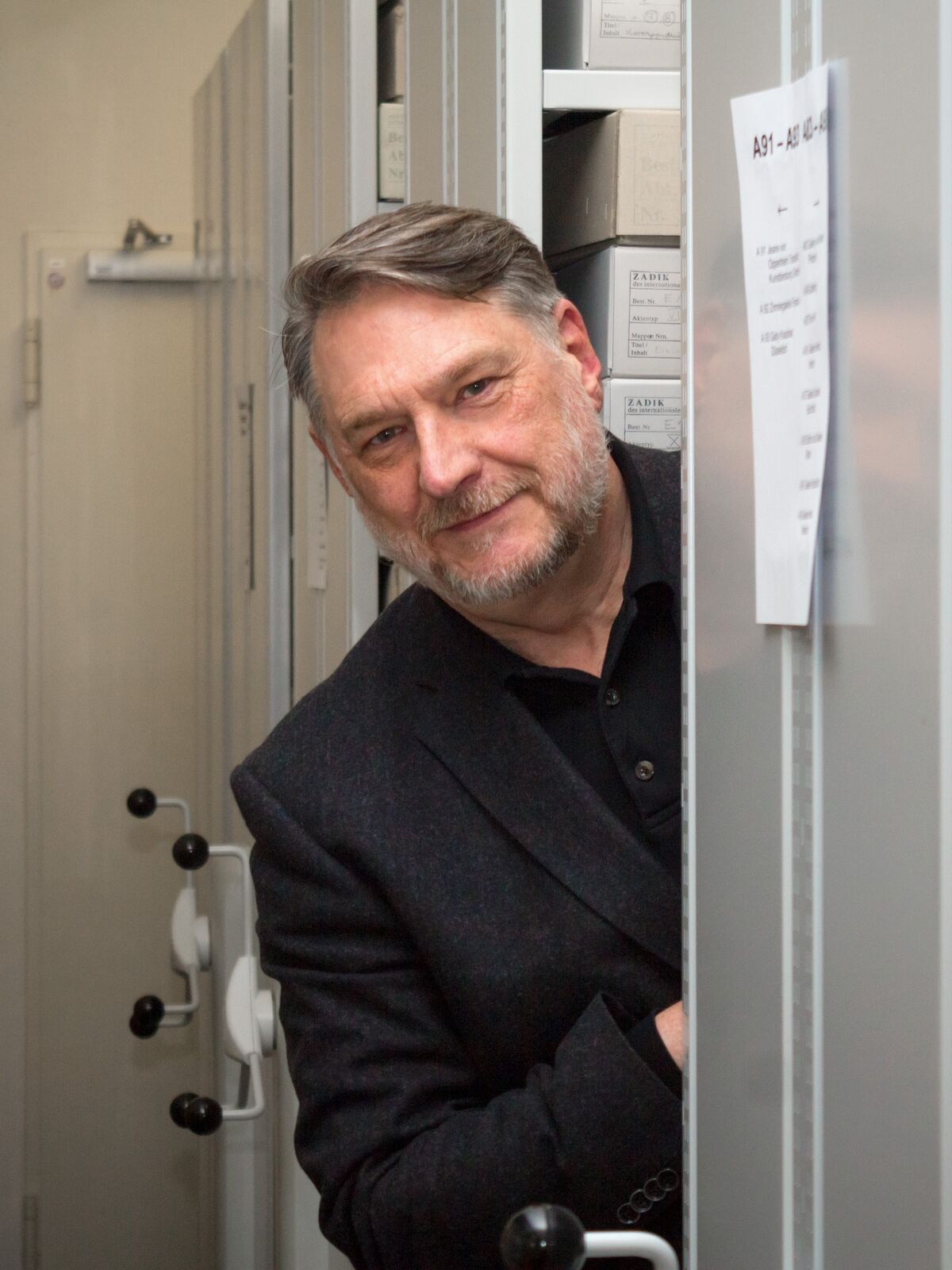 The ZADIK – Zentralarchiv des Internationalen Kunsthandels has been decisively influenced by Günter Herzog for 15 years now. He has developed it into an open, vital "storehouse for the forces of those who mostly work in the shadows to provide the works of artists with their place in modern society“"(Klaus Honnef). Forces that have been maintained in the bequests and estates of important companies and personalities of the art business. These are not only inventoried in the ZADIK, but are also made accessible for research and interested parties through digitalisation, exhibitions and publications.
Günter Herzog took a doctoral degree and qualified as a professor at the University of Cologne, where he has been teaching the cultural and social history of art, as well as the history of the art trade since 1998, and where he was named an adjunct professor in 2008. Two years ago, it was possible to link the ZADIK as a so-called An- Institut (adjunct institute) to the specialist field of art history of the University of Cologne; the perfect foundation for the art market master degree course, which was established here in 2014.
The ZADIK was founded in 1992 by the BVDG and was linked with the Bundeskunsthalle (Art and Exhibition Hall of the Federal Republic of Germany) in Bonn until 2001. It moved to Cologne into a former branch of the Sparkasse KölnBonn in 2001. The bank's SK Stiftung Kultur has since acted as the main sponsor of the ZADIK. This was followed in 2007 by the move to the Mediapark, where it maintains a large magazine, offices and a showroom. The original exhibitions regularly conceived of by Günter Herzog on the occasion of ART COLOGNE can be seen both at the trade fair and in the facilities of ZADIK.
Since the handing over of the first major donation by the Cologne-based Galerie der Spiegel, more than 150 collections can be found in the inventory of the ZADIK; from galleries and institutions, from collectors and curators, as well as from photographers and art critics. With Hauswedell & Nolte (Hamburg), it was for the first time possible to acquire the estate of a renowned auction house. Last summer, two trucks delivered 900 boxes, which now wait to be opened.
Business and private files, correspondence with artists, collectors and museums, manuscripts and autographs, press reports, inventory and price lists, accounts and balance books, as well as thousands of wonderful photographs form the core inventory of the ZADIK treasure chest. Dealings with donors in a spirit of partnership are thereby the measure of all things for Günter Herzog.
Günter Herzog has also managed to consistently further develop the ZADIK series of writings entitled sediment - Mitteilungen zur Geschichte des Kunsthandels (news on the history of the art trade); 26 volumes of this exceptional series have appeared in the meantime. Aspects of modern art mediation are profoundly traced here on the basis of primary sources in the context of cooperation between galleries, artists, curators and collectors. The image material and the printed letters that once passed back and forth between the actors provide a view behind the scenes and are a true joy to read.
The special spirit of the ZADIK is always apparent to Günter Herzog when he discovers networks within the individual archives. When, for example, an artist like Nam June Paik turns up in letters or photos contained in documents of the historic Parnass gallery (Wuppertal), the Konrad Fischer gallery or that of Kasper König, who recently handed over his private archive to the ZADIK. Then, according to Herzog, "people come together with us that used to work with one another“.
Renowned provenance researchers and museum curators appreciate the possibilities for research offered by the ZADIK, the same applying for the pleasant work climate on location, the support and the interest with which every question is addressed by Günter Herzog. Because primary sources are reactivated by diverse usage here, pioneers of the art market are discovered and mostly new chapters of art history can be opened, an ever increasing number of potential donors are considering handing over their private and business archives to the ZADIK.
Under the aegis of Günter Herzog, the ZADIK became an interface between the art business and the science of art. Its cooperative ventures with the documenta archive in Kassel, the documentation centre for contemporary art in Vienna or the Guggenheim Foundation in New York have resulted in international recognition of the ZADIK. This is honoured by the ART COLOGNE Prize, which is endowed with 10,000 Euro and is awarded annually for exceptional performance in the mediation of art by the BVDG and Koelnmesse.
Besides Günter Herzog, Raimund Thomas, Hans Mayer, Rosemarie Schwarzwälder, Fred Jahn, Bernd Lohaus and Anny de Decker, Michael Werner, the Grässlin family and Harald Falckenberg were awarded with the ART COLOGNE Prize in past years.
Further Information: http://www.zadik.info/ (German only)
Share
../../../components/articles_grid/view.coffee