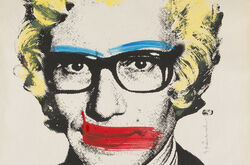 Artist Interview—Knowledge Bennett’s Use of History and Appropriation 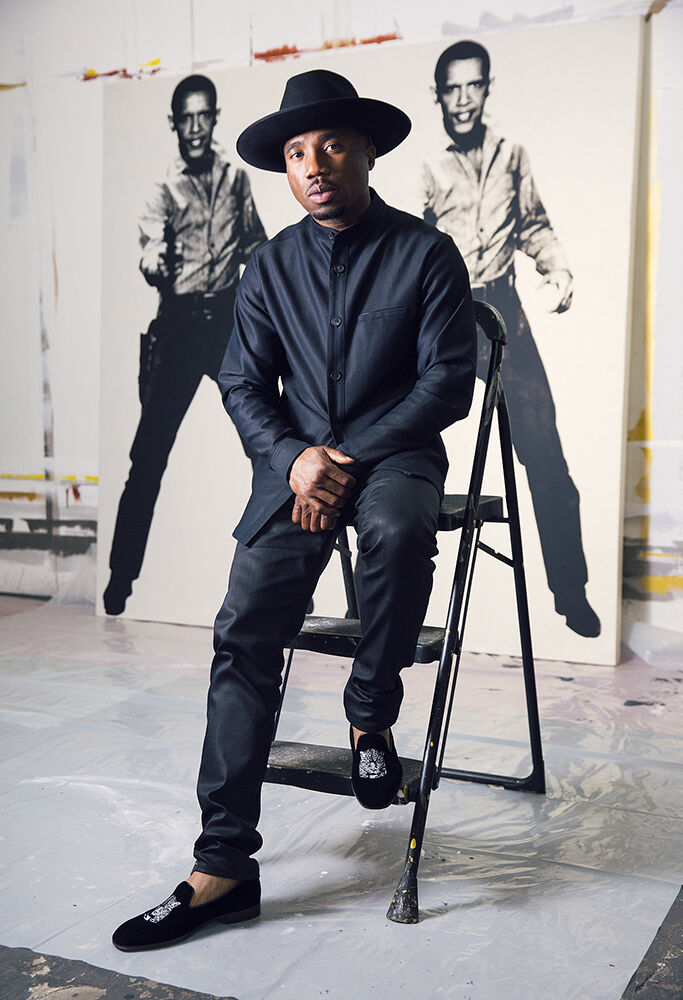 Los Angeles-based artist Knowledge Bennett is a West Coast transplant, originally from New Jersey. Bennett’s work deftly blends numerous references from Pop and Street Art, with contemporary and historical imagery—creating an aesthetic all his own. In conjunction with our second iteration of “Street Art Now” with Julien’s Auctions, we had the chance to speak with Bennett about his process, influences, and the rapidly changing Los Angeles art scene that he is right in the middle of. 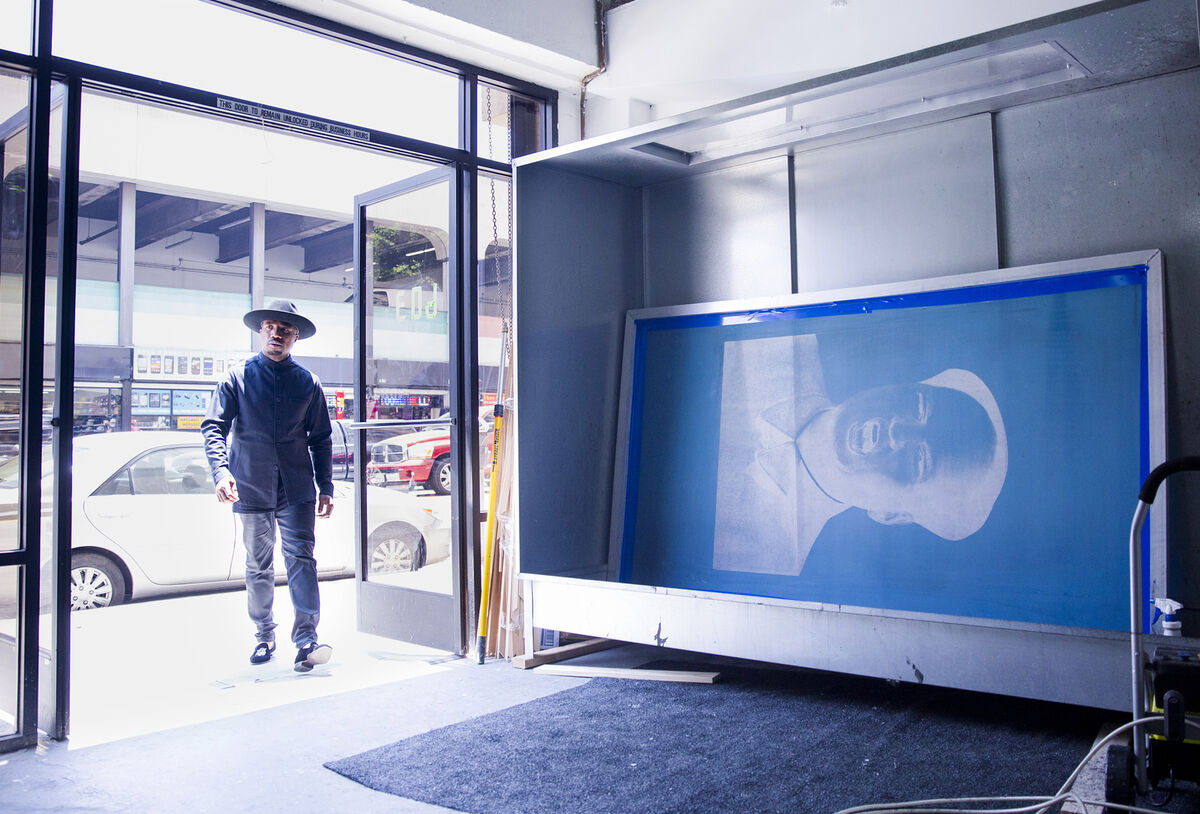 Artsy: What is your process for selecting the figures to feature, and what kind of interventions do you make on the image? How does the appropriating, re-contextualizing, and repeating of images inform your work?
Knowledge Bennett: History plays a major role in selecting characters for my work. Whether it’s world history, American history, Black history, etc. there’s pretty much always some sort of historical imagery present to better help me convey my message. My process is one of deconstructing then reconstructing imagery to take something historical and make it contemporary. The appropriation of pre-existing imagery helps to start at a point of familiarity for not only myself but also the observer. It’s serves only as an aesthetic to draw the people in, in order to have the conversation I’m attempting to have at that moment. The repetitious nature of my works serves several purposes. One, it speaks to the production method as far as the silk-screening process. Two, repetition is the mother of all studies—it helps us humans (creatures of habit) to remember things because they’re being branded into our psyche. Three, it speaks to the intent and purposeful act of what it is that I’m saying. It’s an unapologetic way of saying “I say what I mean therefore I mean what I say”. 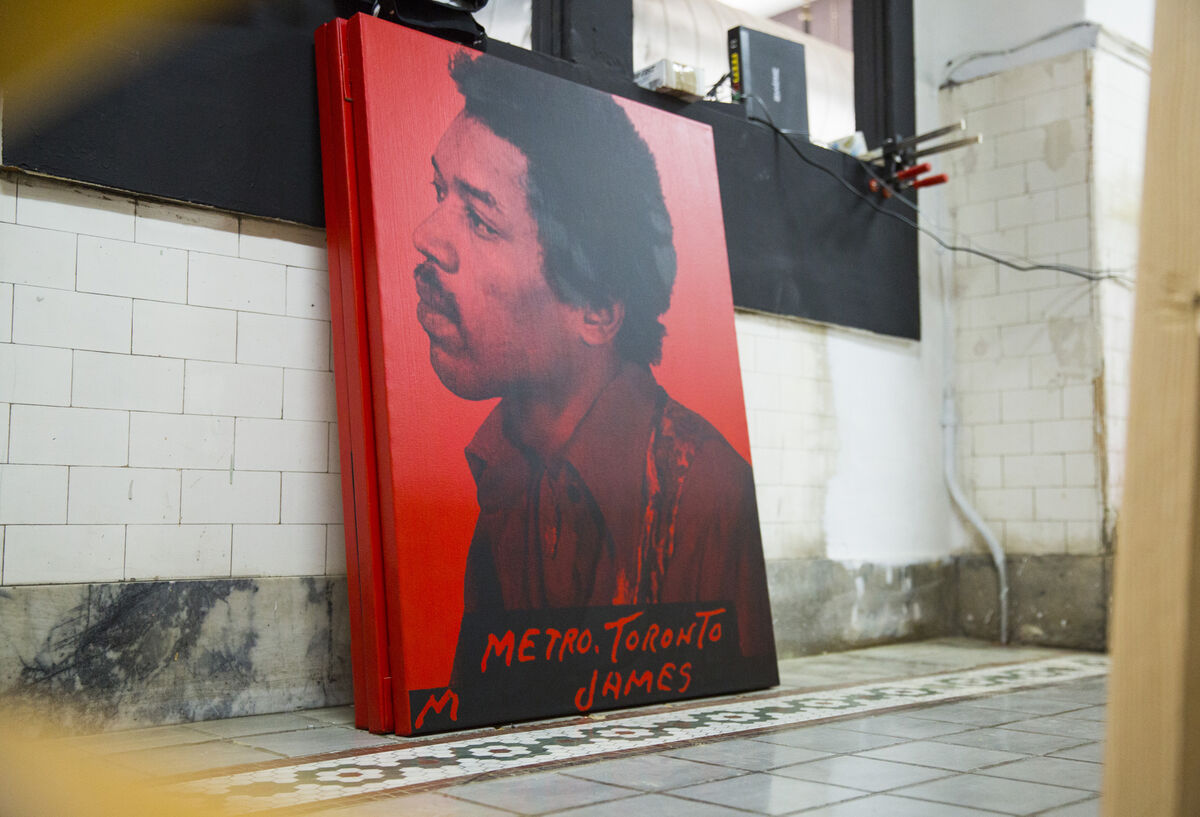 A: As an artist whose work blends the formal qualities and imagery of Pop and Street Art, does one better describe your own practice? Do you see much of a difference between the two?
KB: There’s a constant comparison of the two when it comes to Pop and Street. I’ve always approached my work with the intent of speaking from a Pop perspective. Personally, I’d like to think Pop Art is art with a message just using familiar pre-existing popular imagery to convey such a message. Historically, Pop Art has been about statements, which were kind of a reaction to what was already going on within society. And these statements lend a hand in helping others who may not quite grasp what’s going on, to later understand.
To my knowledge Pop Art was never something done that had the “criminal element” attached to it. Whereas street art in it’s beginning stages had such an element that was carried over from the graffiti movement. You see, Pop Art was something that was more closely related to the world of fine art whereas street art was more of an outsider’s art.
Now where I think most get it confused is where to draw the line between a street artist and a muralist. Historically, one might have been commissioned (muralist) whereas the other was more of an outlaw (street artist). Throughout my career thus far I’ve found myself on both sides of the coin, but not enough to claim either one of these methods of expression, so for now I relate myself and what I do to Pop Art. That’s all. 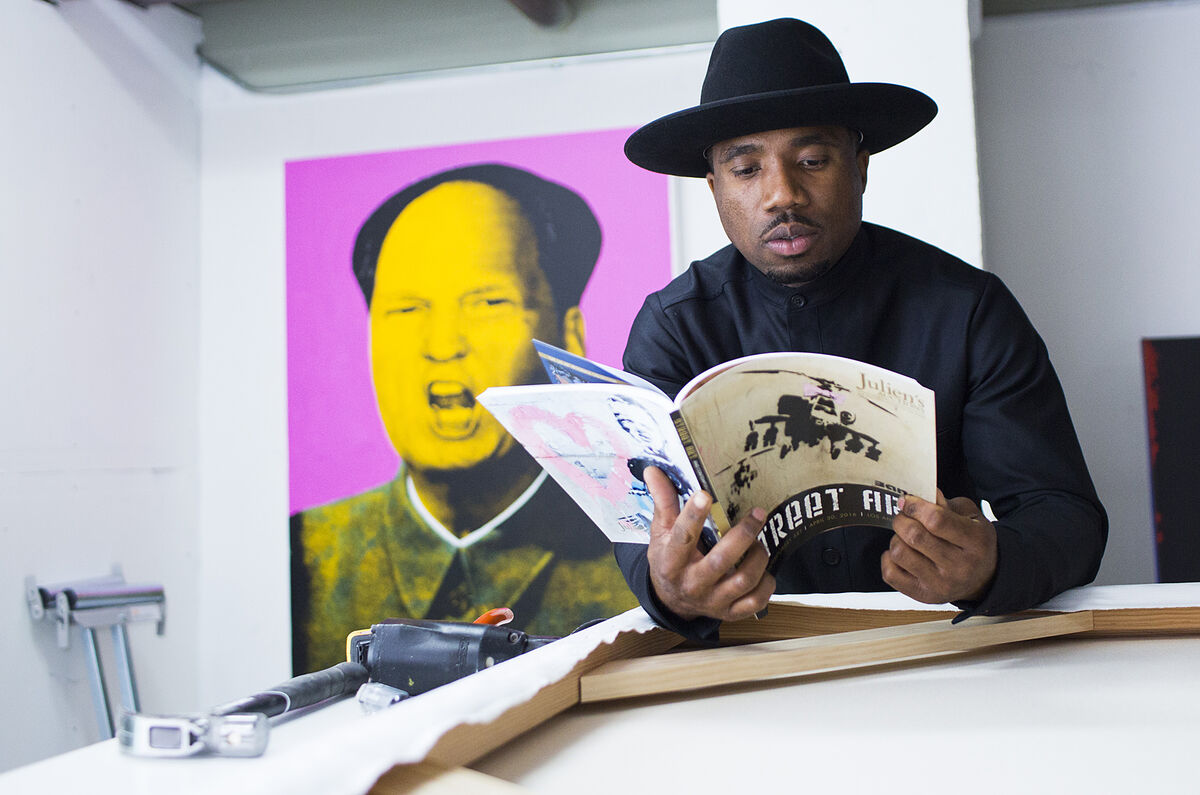 A: Beyond your references to Andy Warhol’s subjects, colors, and printing techniques, is there something else about his work that influences your own?
KB: When people first look at my work the first thing that comes to mind is Andy and the work he produced primarily throughout his career as a painter. I source a lot of my materials from the same sources Andy did. Yet what I’m actually saying is quite different simply because my relationship to such material is different than Andy’s was.
For instance, Andy used a publicity still of Elvis as a Cowboy brandishing a gun. This image was sourced from the 1960 film Flaming Star. It’s been said, that for Andy, the purpose behind painting such an image was pretty much solely due to his love affair with Hollywood and it’s celebrity culture. While me on the other hand, I deconstructed then reconstructed the very same publicity still for the purpose of painting a portrait of America. To be frank, my painting has more to do with America as a egocentric multi-racial society whose love affair with guns has all but made the Natives disappear than it does celebrity culture. Now it goes without saying that Andy’s work has influenced mine yet not in the way most people think. 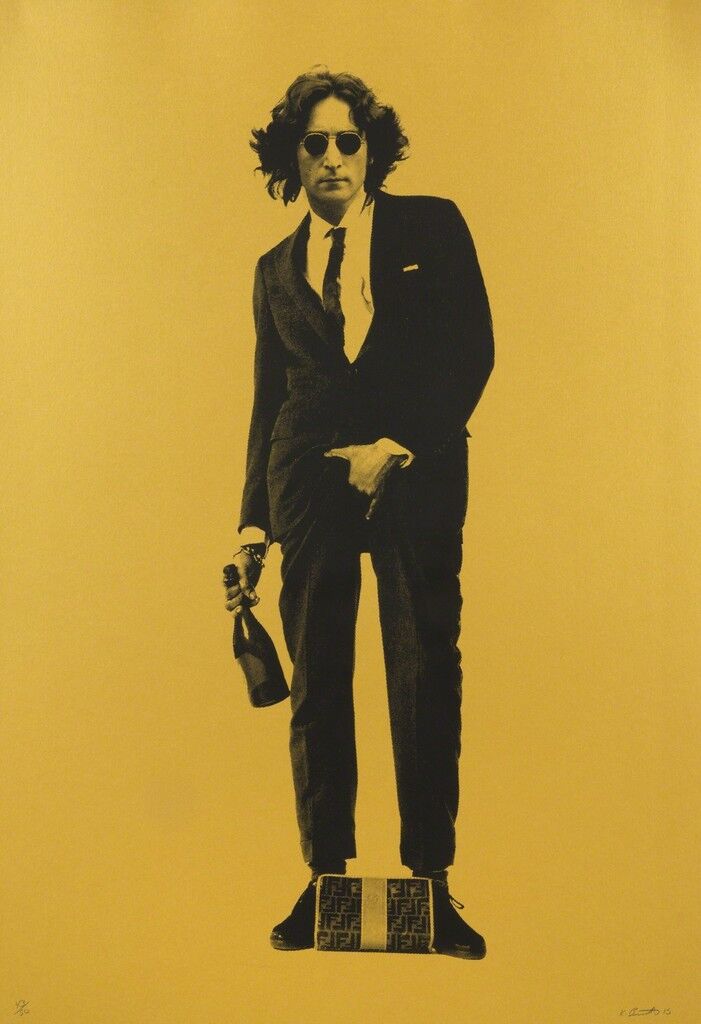 Knowledge BennettCojones (Lennon), 2015. Julien’s Auctions: Street Art Now June 2016
A: Can you tell us a bit more about your “Cojones” series, which Cojones, John Lennon is part of? What about this provocative gesture, and the interchanging of prominent figures’ faces inspired you?
KB: As I said before my work is rooted first in history. This series began first with the Obama character and eight Hip Hop Characters (Biggie, Nas, Jay Z, Tupac, Eazy-E, Snoop Dogg, Kanye West and Puff Daddy (Diddy)). The original photo was one taken from one of my favorite childhood rappers (Slick Rick). Music Industry photographer Janette Beckman captured the original photograph. My initial intent was to speak to hip-hop and its long-standing relationship with politics. As a child most of what I learned about politics and the political process came through the music that I was listening to. Artists such as Public Enemy, KRS-ONE, Rakim, Big Daddy Kane, along with Slick Rick, were instrumental in conveying certain subject matters that would act as a conduit in connecting inner city youth with the political landscape that was directly and/or indirectly affecting the very lives we led. I can recall as I got older and better understood just what these rap artist had done I had an even greater respect for them and their courage to inform the people in such a way.
Now being a student of history, this caused me to look at some of the other artists and public figures that have stood up and used their platform for similar endeavors. This led me to Jimmy Hendrix, John Lennon, Michael Jackson, Prince, etc. So what started out as an homage to Hip Hop and the courage exhibited within such an art form became something even more encompassing including various ballsy individuals and a few who may not have come into their own just yet, but I predict one day will. And that’s how “Cojones” was born. 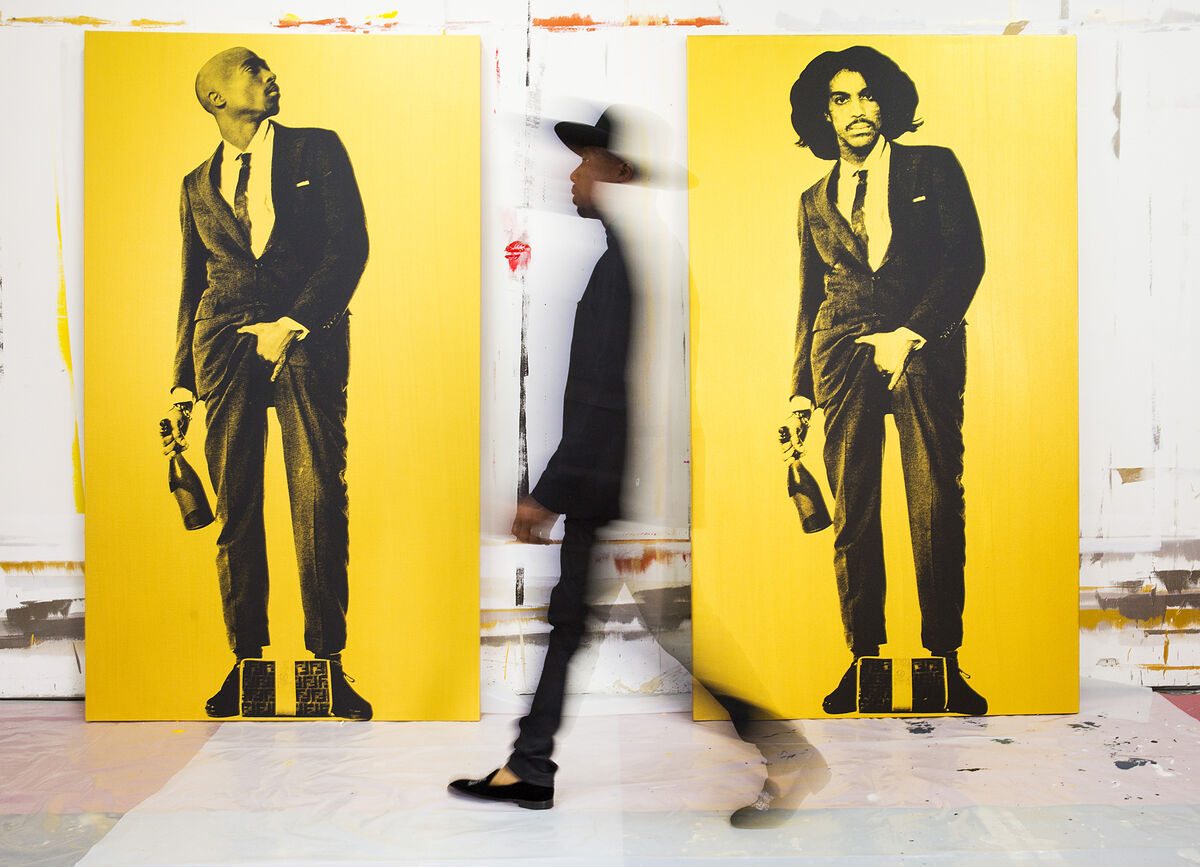 A: With a studio located in rapidly changing Downtown Los Angeles, what changes are you seeing to the art scene? How is the formation of this new arts-focused neighborhood shaping the broader Los Angeles cultural landscape?
KB: Listen, right off the bat, let me just start out by saying Los Angeles is where it’s at right now. I will always love New York but it just wasn’t in the cards for me to remain there and seek to take my career to the next level. Although L.A. is no stranger to the world of art and all things creative, I think we can all agree that something really special is taking place right here, right now. There’s an intense focus on growing this market and making it one of the premier locations for the world of Fine Art. One thing New York has that L.A. doesn’t is a close proximity to the European markets.
Aside from that you can’t beat the weather here in L.A. Also, some of the new galleries and museums being built Downtown alone are creating a level of excitement centered around the arts that I’m not sure has ever existed on such scale before in L.A. I’m seeing a lot of creatives relocating here simply because the quality of living is viewed as much better. New York is indeed the concrete jungle and those of us who have had the pleasure of experiencing that first hand can appreciate L.A. and all it has to offer. 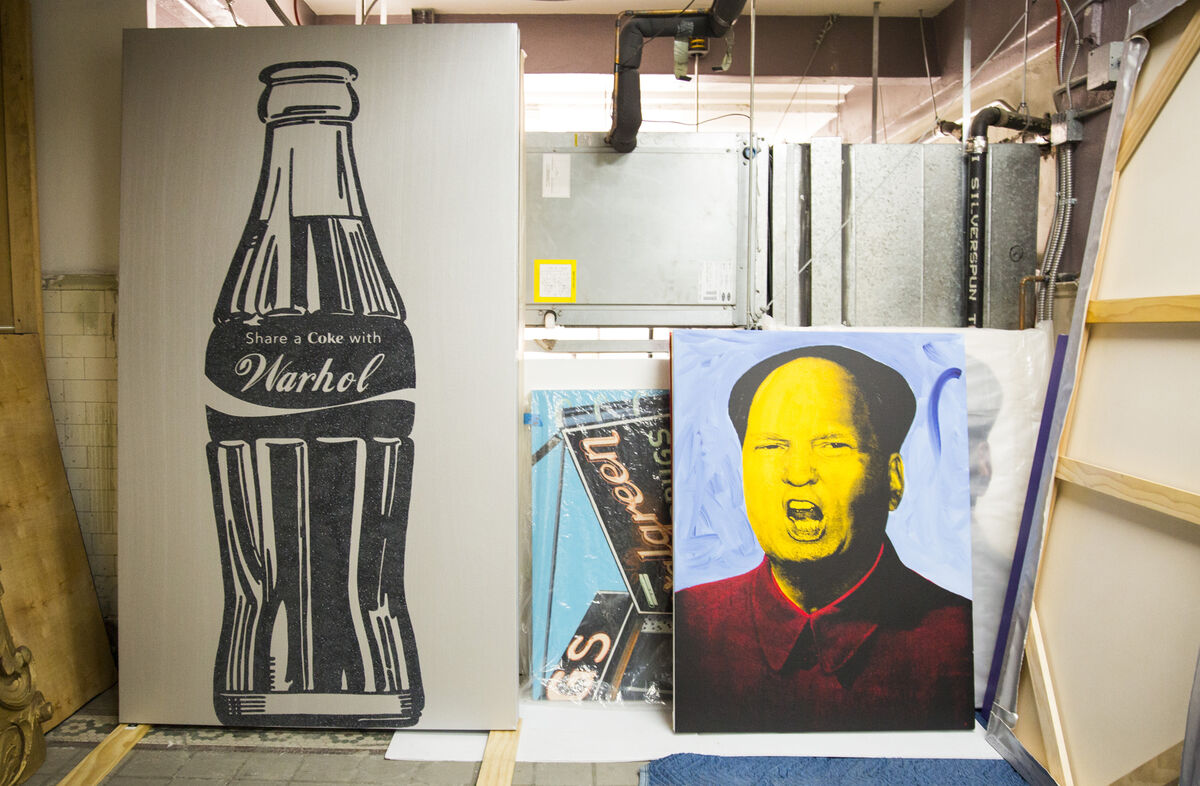 A: Where in Los Angeles do you go to discover Street Art or contemporary art more broadly? Who are some other L.A.-based artists that we should be following?
KB: I’m not someone who necessarily seeks out street art—I’ve always rather liked simply stumbling upon street art and being pleasantly surprised. Since L.A. has its fair share of it from some pretty amazing artists, I’m seldom disappointed. On the other hand, when it comes to public institutions I find myself frequenting the giants such as MOCA, LACMA, The Getty, The Hammer, and the newest addition, The Broad located Downtown.
There’s a fairly new museum (at least new to me) named The Underground Museum. It’s nestled in an often forgotten part of town and is a true diamond in the ruff. A friend of mine introduced me to this museum and I fell in love with it. They have a very unique partnership with MOCA which allows them to bring in some blue chip works of art to a community that would probably otherwise never have the opportunity to witness firsthand the genius of such artist and works. My hat is off to The Underground Museum and MOCA for getting it all the way right.
Now let’s talk about other L.A.-based artists. A creative colleague of mine as well as a great friend is an artist known as The Producer BDB (Bryan Avila). He entered into the L.A. art scene shortly after myself and both he and I have been a constant source of inspiration and motivation to one another.
There are two other artists who are on my radar and whose work I personally collect. These artist have been really quiet when it comes to being on the scene but mark my words in about six months to one year you’ll begin to hear a lot about them. Funny thing is both of their names are Michael. One being Michael Labua, who’s now in the process of completing his transition from NY to L.A., and Michael Callas, who’s based here in Koreatown just above Downtown. Both of these guys are amazing at what they do and I predict will have long standing careers in the world of Fine Art. In addition, I collect work by Cleon Peterson.
I’ve come to know each of these artists personally, and I think that they are extremely smart and hardworking individuals who are in it for all the right reasons—namely for the love of it. For that reason I wanted to have at least one piece of their genius to hold on to. 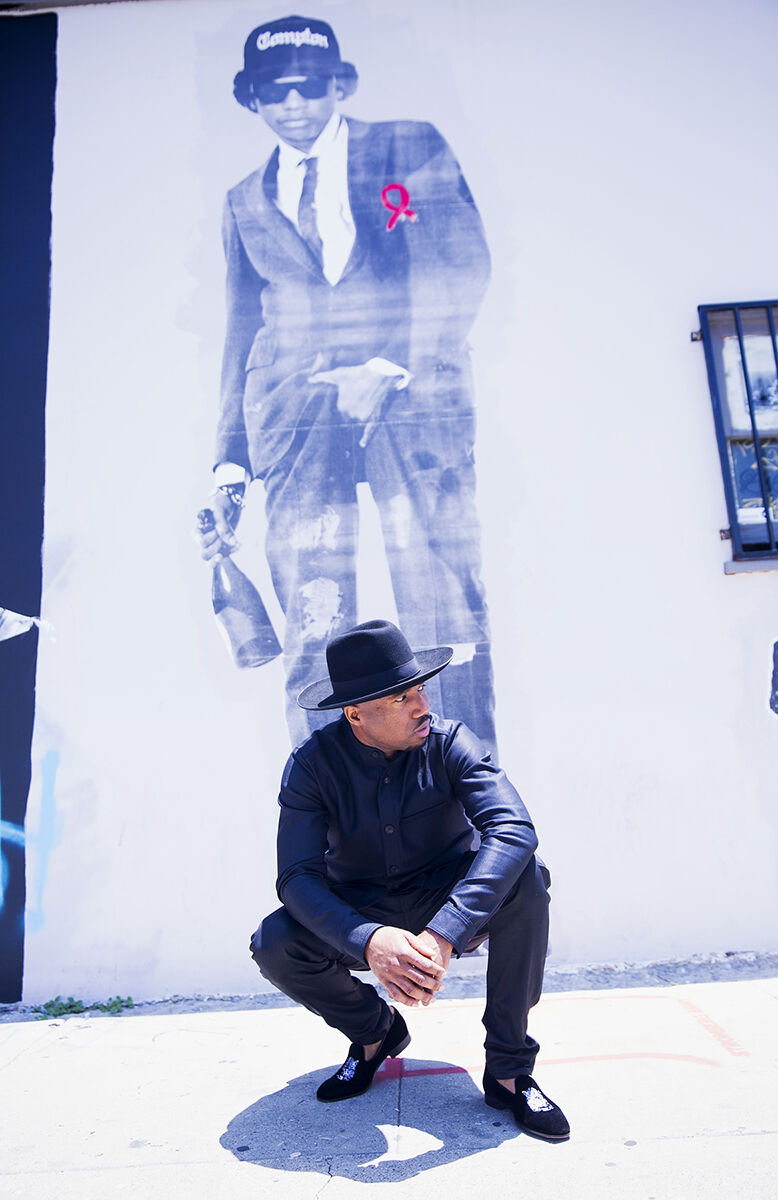 A: Do you have any forthcoming projects or exhibitions that you are particularly excited about and can tell us about?
KB: 2016 has been and will continue to be an extremely busy year for me. Aside from what’s been done thus far I have a show coming up at Scope in Basel, Switzerland, Art Southampton (July), The Affordable Art Fair NYC (September), an Art Fair in Paris (October), a solo show in Montreal (October), a solo show in Paris (November), and Scope and Context in Miami, Florida (December). At these fairs and gallery exhibitions I’ll be represented by either Galerie Barrou Planquart of Paris France; Joseph Gross Gallery, New York; and Galerie Le Royer, Montreal. In addition to all this I have a few projects here in L.A. that I’m working on and another project down in Melbourne, Australia come September.
Explore Julien’s: Auctions “Street Art Now” on Artsy. Bidding closes Tuesday, June 21st at 6pm PT/9pm ET.
Visit Knowledge Bennett’s exhibition at Scope in Basel, Switzerland from June 14th—19th at Galerie Virginie Barrou’s booth (C37).
Photographed by Colin Young-Wolff for Julien's Auctions.
Share
../../../components/articles_grid/view.coffee