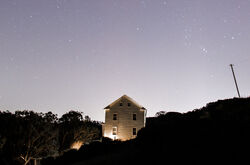 Featuring thoughts on community, creativity during a pandemic, and highlights from Headlands Center for the Arts: Benefit Auction 2020 on Artsy,.

Artsy Auctions
Jul 14, 2020 6:10pm
On June 30, 2020, Headlands artist Rodney Ewing (AIR ‘19) met over Instagram Live with Director of Programs Sean Uyehara for a socially-distanced studio visit. Ewing, a renowned artist and beloved teacher deeply embedded in the San Francisco arts community, shared some strategies for generating solo and collaborative work during the pandemic. Ewing also spoke about how the support of Bay Area artist residencies such as Headlands have afforded him the room to take on risks with his practice that drove it in new directions.
Transcribed by Aay Preston-Myint. Some sections have been cut for length, and some short phrases and words have been removed for clarity. 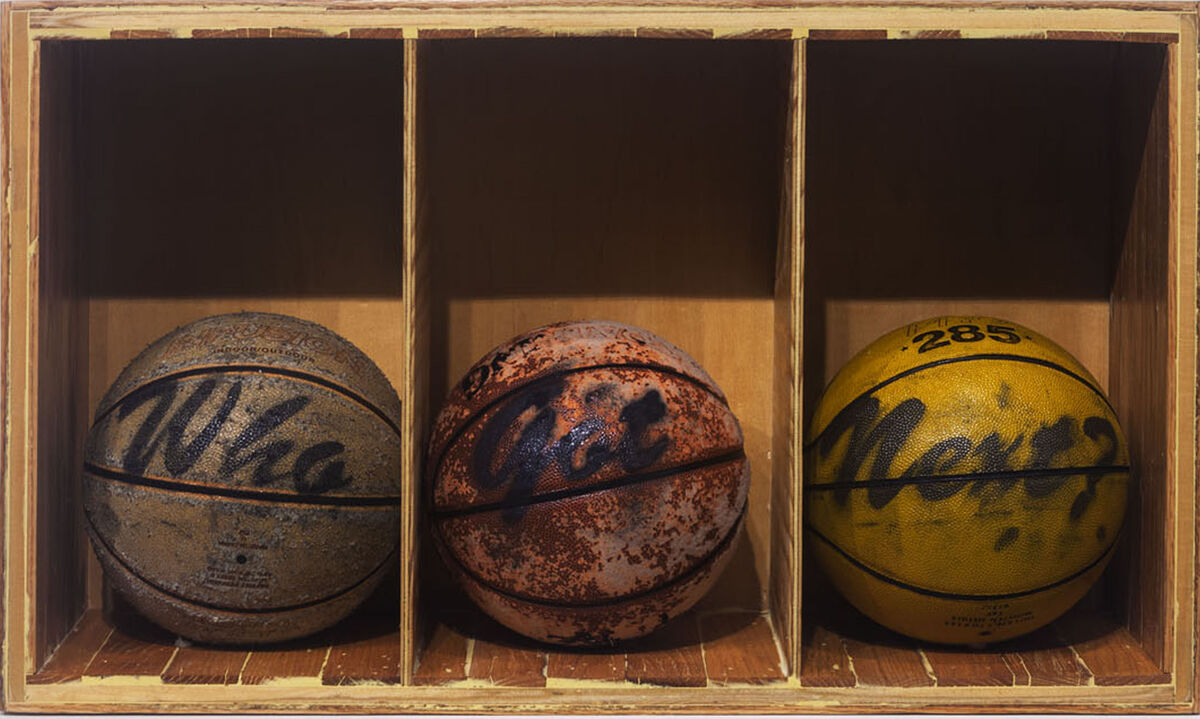 Sean Uyehara: Where are you speaking to us from?
Rodney Ewing: I’m in my studio, it’s in San Francisco in the Mission District.
SU: I’m in the East Bay, so close but so far away these days. How have these days affected you? The pandemic is one thing, how did that begin to affect your work?
RE: I think there were about two weeks just when the pandemic hit, I was in the southern United States, I was helping my mother move from one home to another...that was emotionally pretty exhausting for me. When I got back to San Francisco ...Those first couple of weeks it was really difficult, I was out of it, I was thrown out of my routine. I’m not getting up, going to work, going to teach, and adjusting to this new online environment. So, getting up in the morning and having some kind of ritual, ...and moving to [my studio] really helped me a lot. And also starting to plan some kind of work. I had this project in the back of my mind for about a year now. In that case it was really productive to give myself that project ...creating a new work on paper for every day and a half and posting it.
SU: I think a lot of people have been experiencing it like that, of course, there's a lot of sadness and grief, but there are also new modes of working.... Time itself is feeling very different. One thing I’ve learned in seeing you work, and seeing a lot of other artists work at Headlands, is that one’s relationship to time really matters a lot, in terms of, this is how you’re actually able to get things produced. 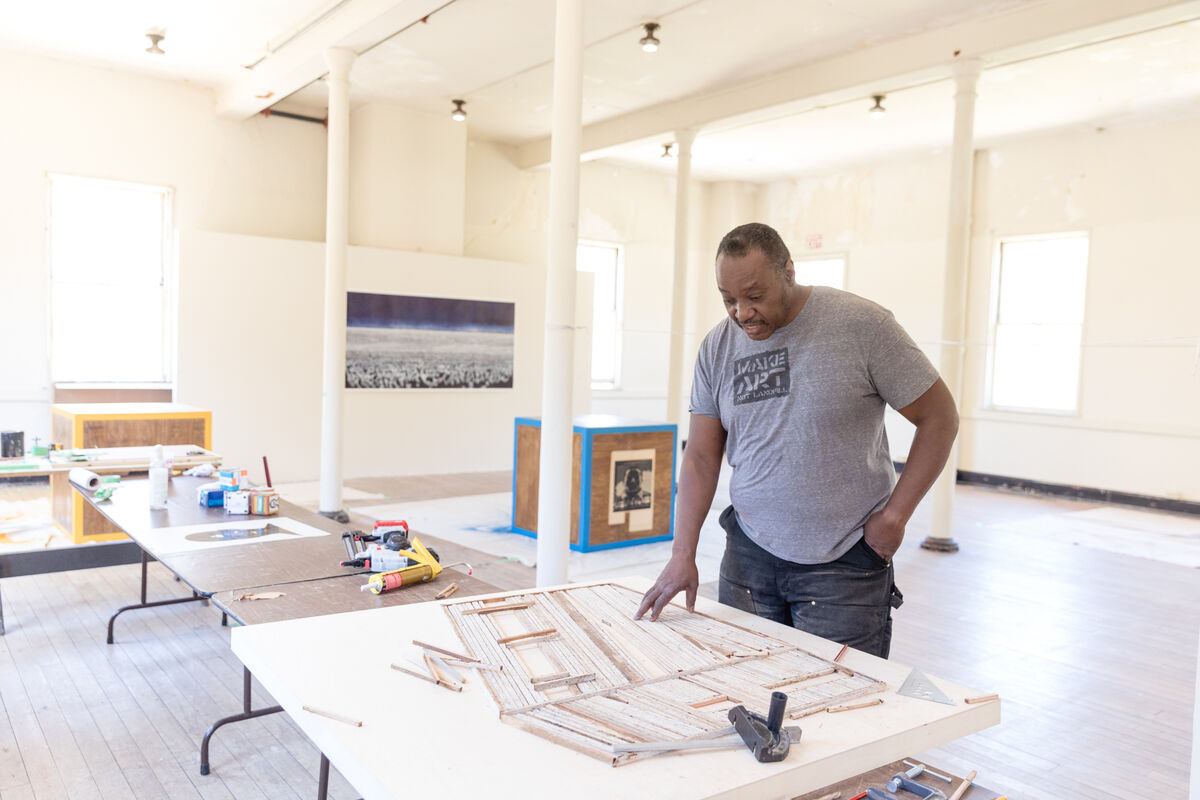 RE: In April, I was supposed to be at a residency here in San Francisco called Space Program SF ...I was supposed to be collaborating with the artist Tahiti Pehrson, but we couldn't do that ‘cause everybody’s supposed to be on lockdown. For everybody that doesn't know Tahiti’s work, he does these really elaborate patterned, beautifully patterned cuts on paper and canvas. So he’s been cutting pieces of various sizes, and colors, and shipping them to me, and then I’ve been silkscreening on top of them.
… That’s also been a relief, that we can have the dialogue between the two of us going. When he sends stuff, it’s like Christmas — like wow, what am I gonna get today? 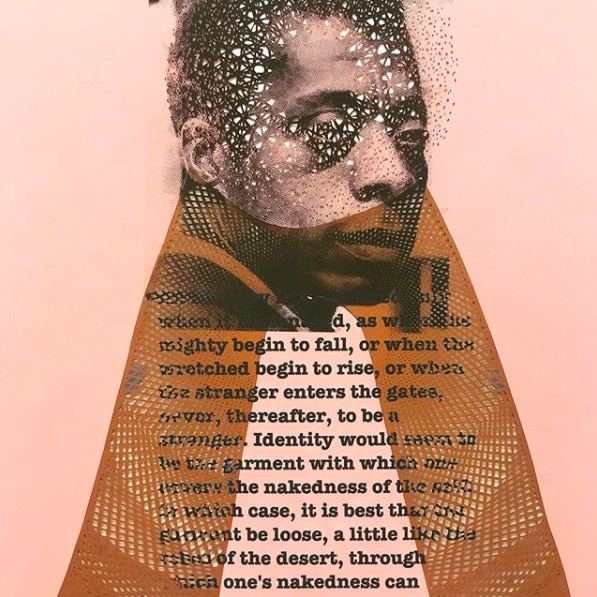 Studio collaboration between Ewing and Tahiti Pehrson. Captured from Ewing’s Instagram account, @ledette. IG caption: New collaboration from @tahitipehrson and myself. Cut paper and silkscreen. James Baldwin and his quote from his book, “The Devil Finds Work”. Having so much fun working with Tahiti for @thespaceprogramsf residency.

SU: Do you have any examples of the piece that’s in the auction?
RE: Yeah I have it right here. It’s a three-dimensional piece called Hard Court. I completed this piece when I was in residency at Recology, in 2017-18. While I was there, I had a whole different plan. When I got there, I thought I would make these really elaborate woodcuts. I started gathering all this wood and different material from the dump, And one day I sorta had a panic attack, I looked around me like, what am I doing with all this stuff? And I looked around me and thought, I’m collecting detritus from people’s homes. I’m collecting things that nobody uses because these homes no longer exist. And I started thinking about my neighborhood, and seeing a lot of glass and steel going up, a lot of single family homes and apartments, and affordable living becoming scarce in the city, and I just thought I should do something that honored these materials, and the memories that these materials represented. …I usually consider myself somebody who does a lot of 2-D work, and that residency gave me the excuse to do all 3-D work. ... I’m of a generation when, you know, if my friends and I got bored, somehow we ended up in our father’s toolboxes, and we ended up building stuff.... and you get these Fat Albert and Cosby Kid fantasies. And being at Recology reminded me that I like to build things. 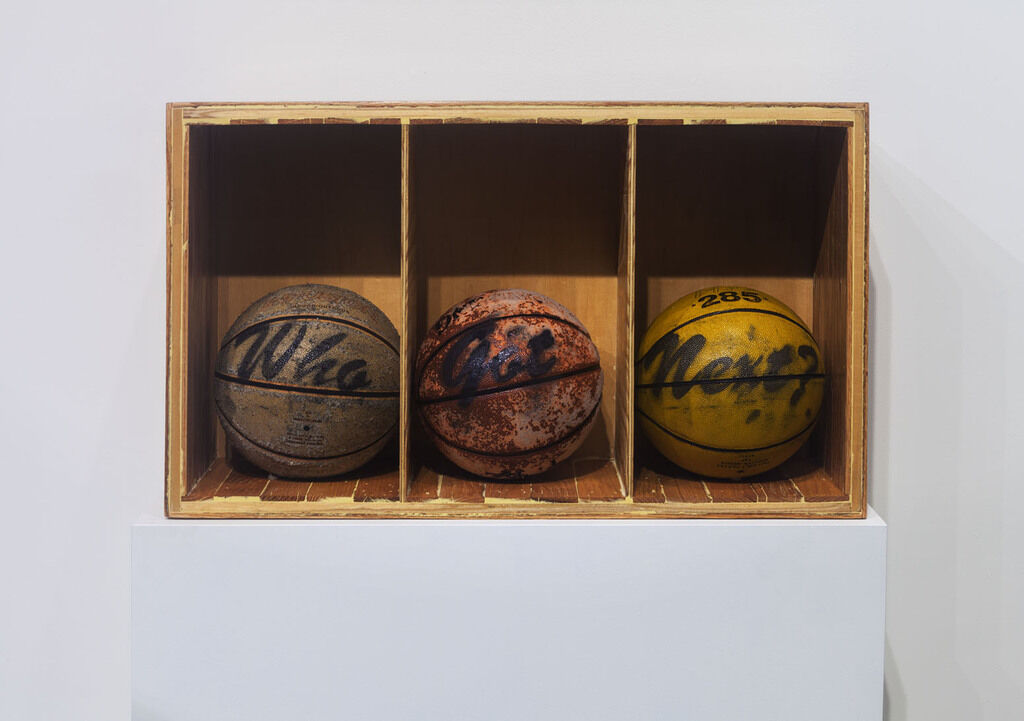 Rodney EwingHard Court, 2018. Headlands Center for the Arts Benefit Auction
SU: A lot of the work that I’ve seen of yours is sculptural. And the craftsmanship is kind of awe inspiring to see, you have all these seamless joins. With the ball itself, it says, Who got next?
RE: ...at Recology...I found one basketball, I found another one, grabbed it and another one, and... I started thinking, how can I make these pieces work into this theme of gentrification and diaspora. And I started thinking of this situation that happened in Garfield Park in the Mission. There’s this regular soccer game that’s played by locals there, and just like any other playground...if you wanna get in on the game, you say I got next, or who got next? You wait with your team and you wait for the game to come in. Except this one particular occasion, a local startup came in and said they had a permit and the locals had to get off the field, and it's like...who does that? … You don’t show up with a permit. You get your boys together and you wait. And you play as long as you can, you win as many games as you can, and when you lose, you go back to the end of the queue and you wait again, or you go home. I remember I was talking with some friends later that same day, we were at the gym, that was our same reaction, like who does that? Have you lost your mind? ....it’s also a reflection on who's’ got next in this neighborhood. Who’s gonna be taking what from whom in this neighborhood. It’s also that question.
SU: It could refer to so many things, but it’s nice that it also refers to something that is pretty funny. Because it’s true, just take your chances, Get in the queue. And if the kids beat you, then get better.
RE: And what better way if you’re an outsider to join a new community. I moved around a lot as a kid, because my father was in the Air Force and the playground was always the great unifier. ... I don’t see how that’s still not applicable even when you're an adult.
SU: It makes sense: if you want to be part of the community, be part of it.
RE: Yeah learn to play the game, learn the rituals.
SU: I really appreciate you taking the time. The body of work you’ve been making has been amazing. ...I’m glad we’ve been able to learn so much from you. 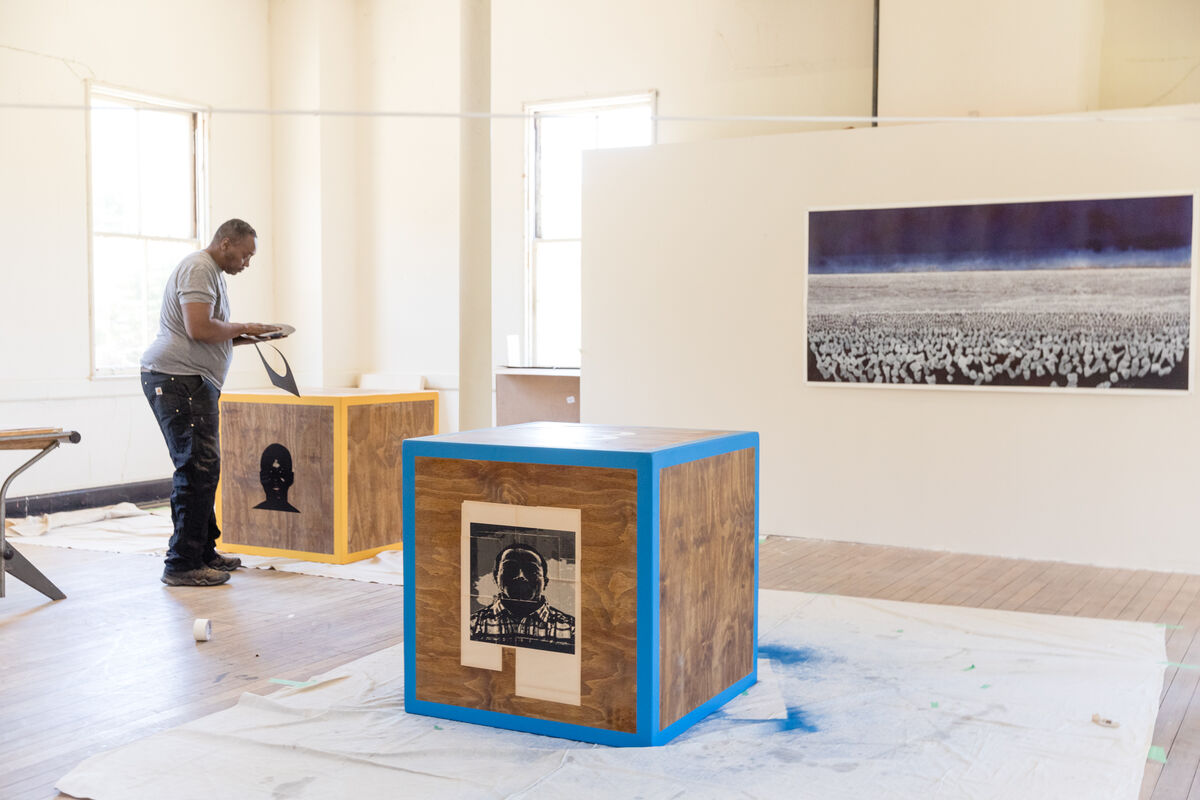 RE: I couldn’t have made that piece last summer without you guys. ...Just being able to have that space, and that cohort you gathered - we still talk. We’ll jump on Whatsapp one on one or as a group ...having that space was great, but having that cohort, to be able to talk things over with, or just watch movies with, it was life changing for me, so thank you.
SU: We couldn't do it without you – we appreciate you. Hopefully we’ll be able to see each other in person soon, not 15 miles away. 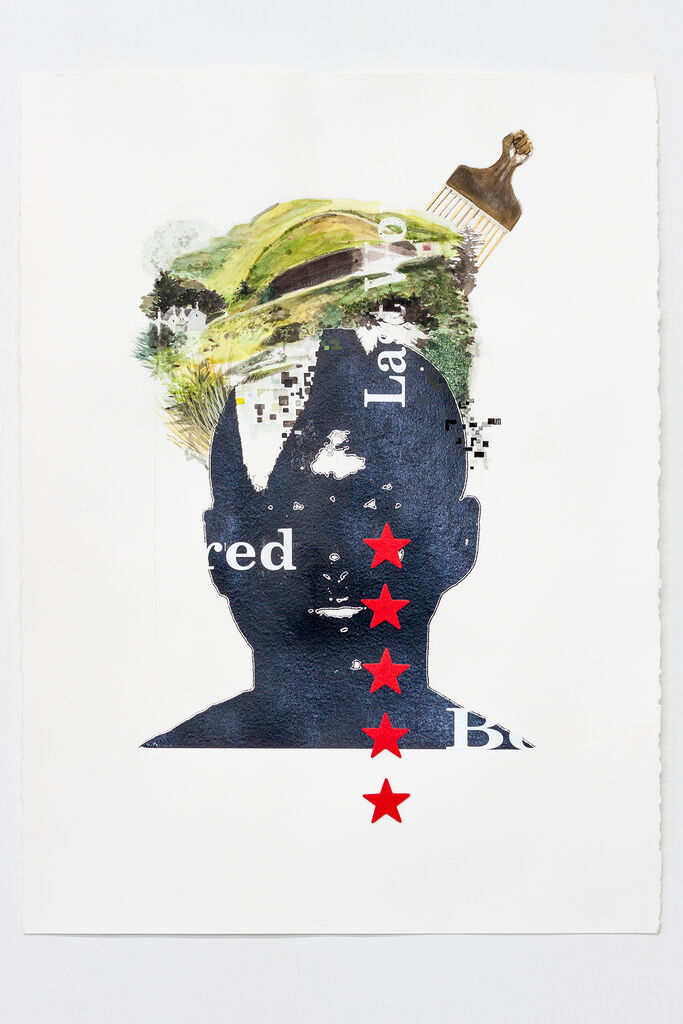 B.E.N. Collective (Nyame Brown | Rodney Ewing | Kori Newkirk)Rites, 2020. Headlands Center for the Arts Benefit Auction
Rites (seen above), a piece donated for Headlands Center for the Arts’ online Benefit Auction by the B.E.N. Collective (Nyame Brown, Rodney Ewing, and Kori Newkirk), was completed using the same process as Ewing’s distanced collaborations with Tahiti Pehrson. All three artists met during their residency at Headlands Center for the Arts in 2019, and have continued to keep in touch and make work as B.E.N. — each artist contributes images and ideas to the piece, and then forwards it to the next via post.
This work, Hard Court, and many others by Headlands alumni and scores of local and international artists are available through the online Benefit Auction here on Artsy through July 21st.
Share
../../../components/articles_grid/view.coffee