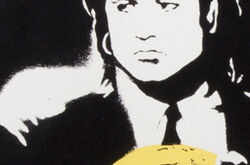 Open for live bidding on October 22nd, “Julien’s Auction: Street Art and Contemporary Art Sale” highlights the diverse legacy of street art, featuring lots by Banksy, Kaws, Shepard Fairey, Knowledge Bennett, and more. One of the most iconic works in the evening sale is Keith Haring’s “Radiant Baby with AIDS Alligator,” drawn by the artist on a subway sign around 1984. Arguably the protagonist of Haring’s oeuvre, the Radiant Baby is a symbol with a rich history, at times referencing Jesus Christ, the Nuclear Arms Race, or the artist himself. 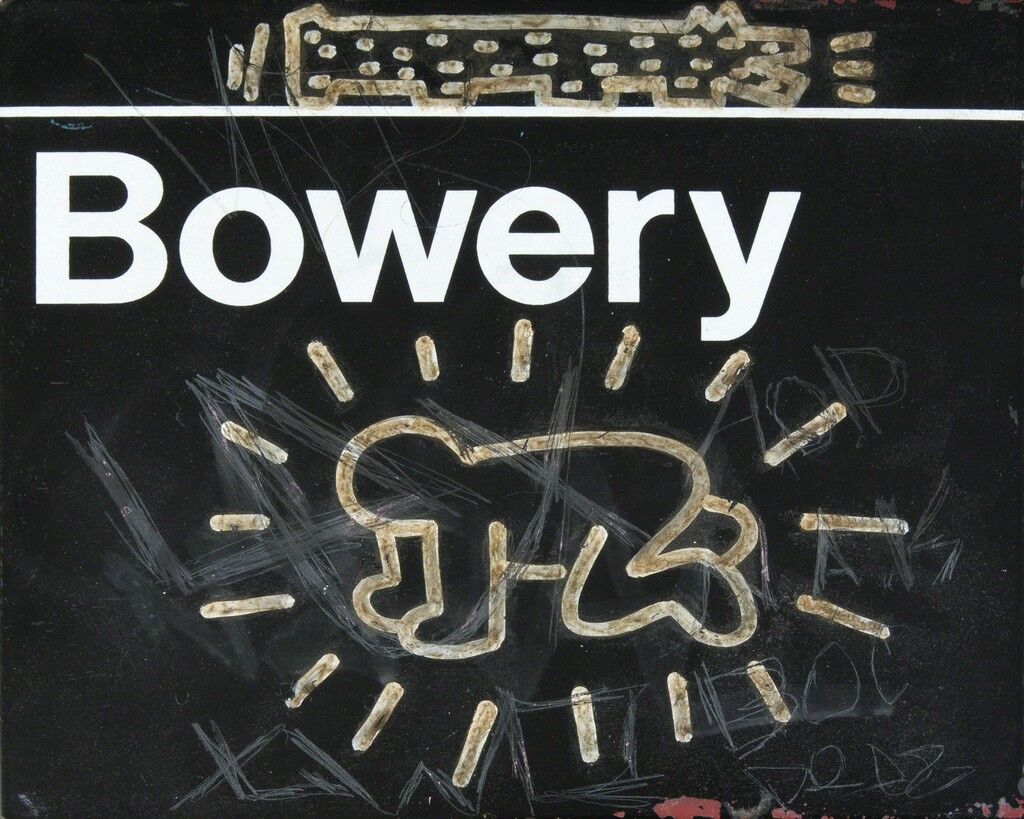 Keith HaringRadiant Baby with AIDS Alligator, Circa 1984. Julien's Auctions: Street Art Evening Sale
The Radiant Baby was born in 1980 in the New York subway, a place where Haring famously drew thousands of chalk drawings on empty advertising panels. The subway acted like a laboratory for Haring, a place to experiment and invent his now-iconic personal writing system through constant repetition. There, he developed a vocabulary of recurring symbols that included the Radiant Baby, an angel, a barking dog, a flying man, and a smiling face with three eyes. Haring described The Radiant Baby, the lead character of these, as “the purest and most positive experience of human existence.” This graphic image—a crawling infant surrounded by radiating lines—became Haring’s “tag” or signature, which he reproduced on canvases, city walls, t-shirts, buttons, watches, and more.
Throughout his decade-long career, Haring featured the figure in a variety of contexts. In high school, Haring joined the Jesus Freaks, a radical, counter-cultural Christian group that originated on the West Coast and spread to across the world. While Haring left the group in his late teens, themes of Christianity recur throughout his artistic career in New York. In some of these works, Haring pictures Christ as the Radiant Baby within nativity scenes and sometimes even uses it, along with crosses, as a symbol of Christianity more generally.
In other instances, the Radiant Baby takes on a darker significance. Along with many other artists of his time, Haring responded to the escalation of the nuclear arms race by advocating for disarmament and depicting scenes of an apocalyptic world in his work. In a poster for an anti-nuclear demonstration in 1982, for example, Haring encloses the Radiant Baby within a mushroom cloud surrounded by death and chaos. Here, the radiating lines no longer connote innocence, but instead radioactivity and destruction.
Like the rest of his work, Haring made a point to leave the symbolism of the Radiant Baby open-ended, letting the image accumulate new meanings as his career forged on. Whether a sign of nuclear corruption, movement, divinity, happiness, or all of the above, the crawling figure is at its core Keith Haring’s logo, carrying with it the persona of the artist himself.
—Amy Raffel
Amy Raffel is a PhD candidate at The Graduate Center writing her dissertation on Keith Haring’s Pop Shop
Explore "Julien's Auctions: Street Art Evening Sale” on Artsy. Live bidding begins on October 22nd at 7:00pm PT (10:00pm ET).
Explore "Julien's Auctions: Street and Contemporary Art Day Sale” on Artsy. Live bidding begins on October 22nd at 2:00pm PT (5:00pm ET).
Share
../../../components/articles_grid/view.coffee