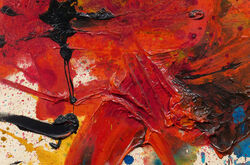 Available This Week: Tony Cragg’s “Discussion” Reveals the Evolution of His Craft

British-born, German-based sculptor Tony Cragg rose to prominence in the 1980s as a leading voice in the cohort known as New British Sculpture. Seeking a new, European sensibility, homegrown out of the continent’s neo-avant-garde positions, this group, which also included Antony Gormley and Anish Kapoor, took inspiration from a broad range of practices. But the awe-inspiring technique of their work—Kapoor’s mirrored surfaces, Gormley’s cubistic distillation of space into three-dimensional grids, or Cragg’s fractal-like complexity—have tended to overshadow their art historical roots. In the case of Cragg, whose 2005 sculpture Discussion is up for auction on June 25th by the Swiss auction house Koller, this genealogy forms the basis for the artist’s iconic style, often in surprising ways. 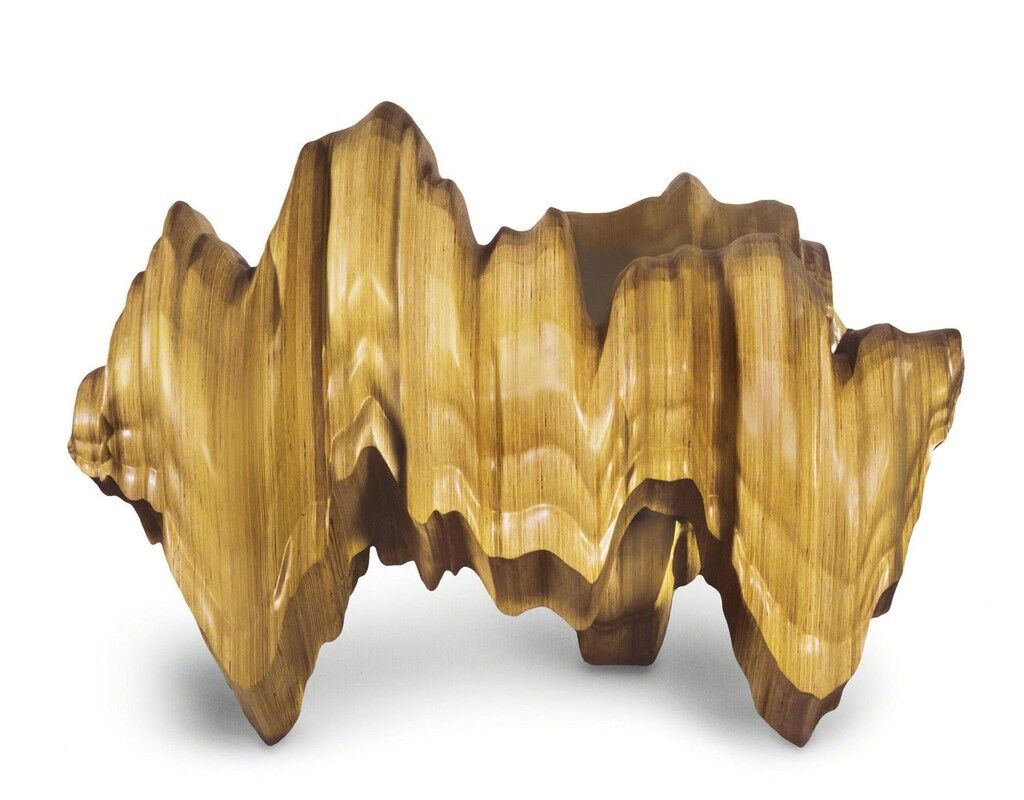 Tony CraggDiscussion, 2005. Koller Auctions: PostWar & Contemporary
Cragg is perhaps best known for his “Rational Beings” series, which resemble layered stalagmites or biomorphic totems. These sculptures often begin with a series of sketches of gestural ovals, which he translates into sheets that are stacked and glued together, almost like a manual version of 3D printing. Although it took Cragg many decades to arrive at this signature aesthetic, his abiding interest in materials dates back to before his time at art school. 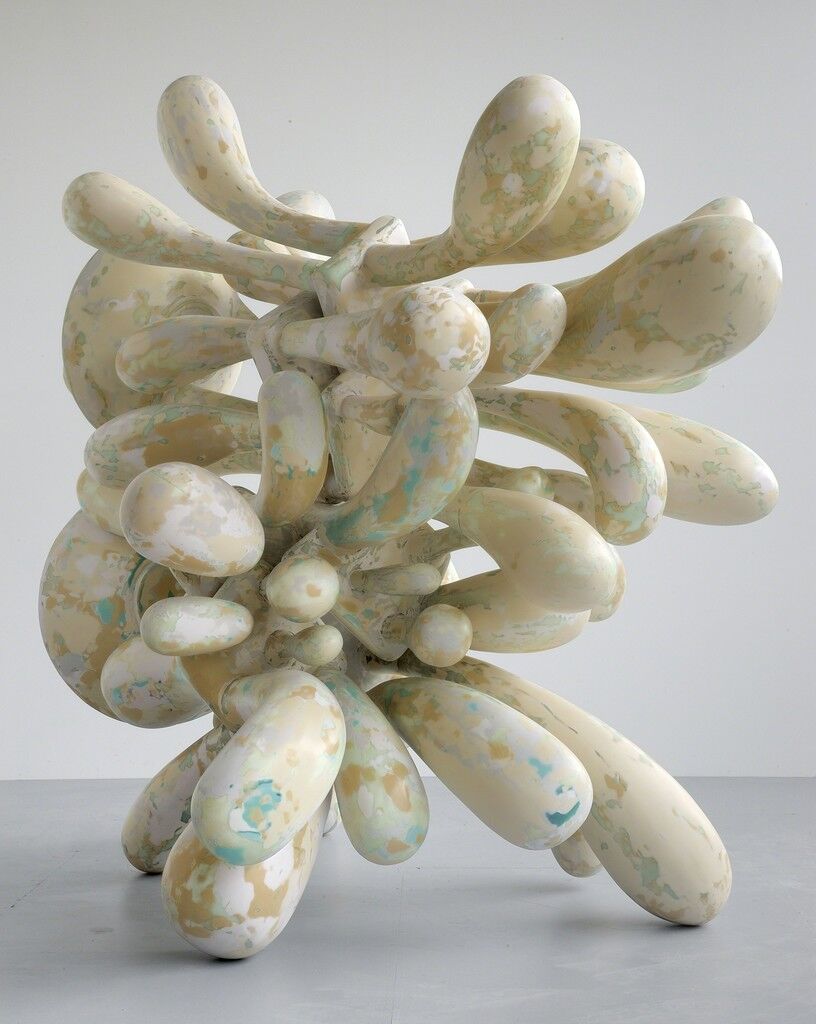 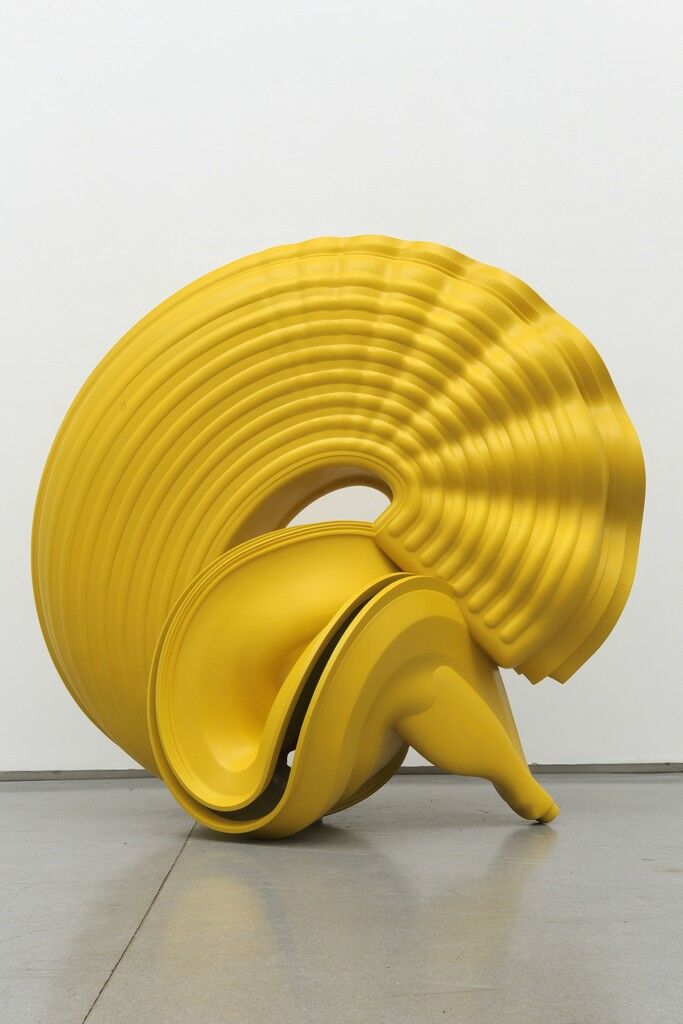 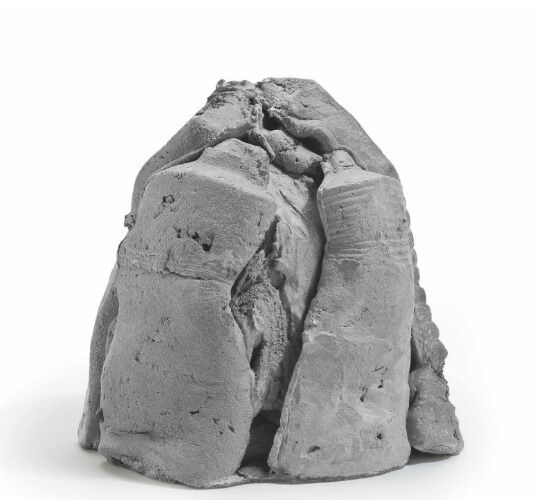 Tony CraggBigger Piece, 1990. Mark Borghi Fine Art
The son of an electrical engineer who serviced airplanes, Cragg came to art only after a stint as a lab assistant at the National Rubber Producers Research Association left him disenchanted with the life of a scientist. He decided to study fine art at the Gloucester School of Art, where a simple lesson in sculpture would exert a lasting influence on his relationship to materials. The students were taken to a broom closet full of old materials, and told to choose anything to make a sculpture out of. “Within the first few hours of playing with this material,” Cragg has reflected, “I found it was remarkable that every time you take a bit of material and move it around, change it’s shape or whatever, you have different associations, different ideas, or even different emotions about it.”
Cragg went on to finish his degree in painting at the Wimbledon College of Arts, a small institution in South West London, and ultimately went on to pursue a graduate fine arts degree at the Royal College from 1973-1977, where he studied sculpture with Bernard Meadows, a student of Henry Moore. 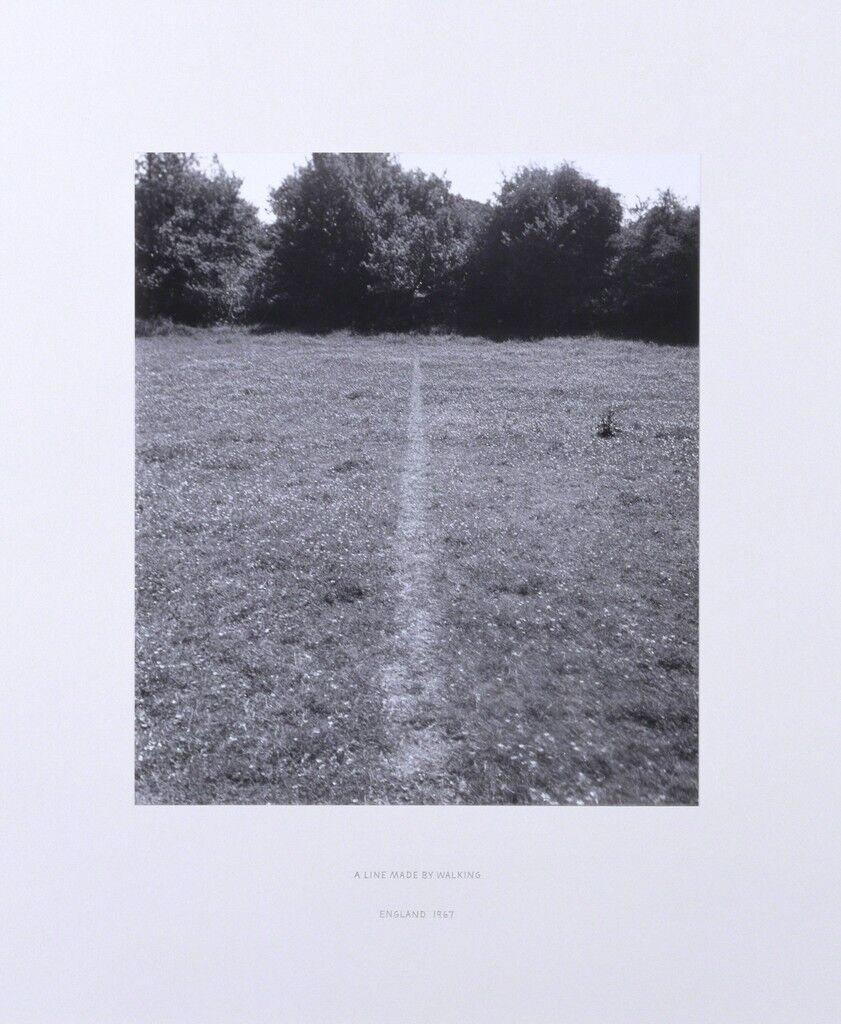 Richard LongA Line Made by Walking, 1967. "Conceptual Art in Britain 1964–1979" at Tate Britain, London
Cragg’s works of the 1970s, many created while he was still in school, bespeak a confluence of Land Art, Performance Art, and Minimalism, which were all reaching their height during his student days. In 1972, Cragg drew the outline of his shadow onto the beach (the work exists as the photographic documentation, Untitled, Shadow Drawing, 1972), an act that used the human body as a material, while also reflecting a belief in the proximity of the human figure and nature. The use of the Earth itself as a sketchpad also recalls the practice of Richard Long, whom Cragg met at Wimbledon, specifically, A Line made by Walking, (1967), one of many in which the land artist expanded the field of sculpture to include the natural world. 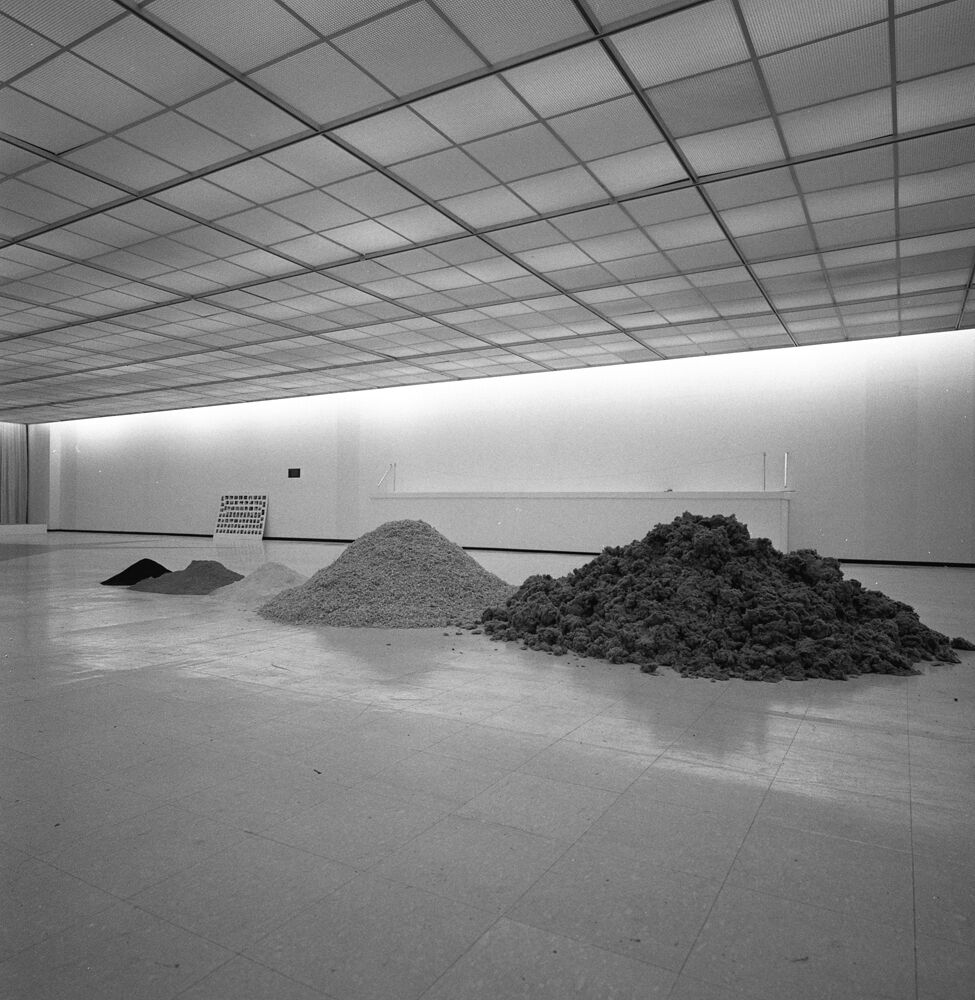 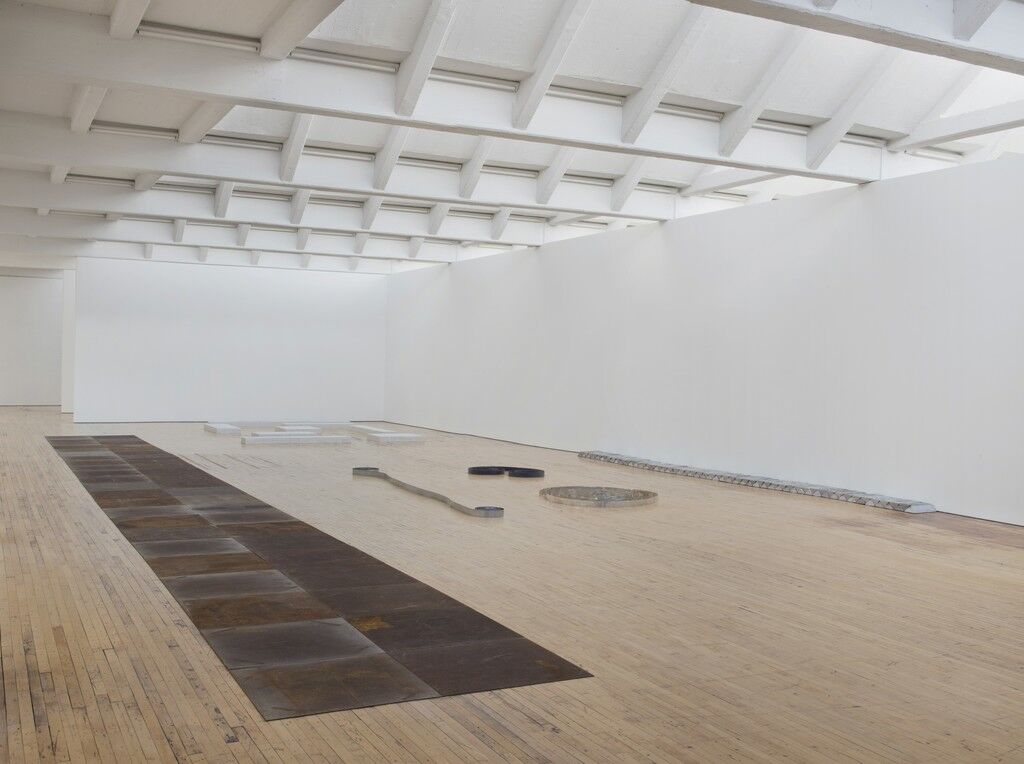 Carl AndreInstallation view Sculpture as Place, 1958-2010 (Installation view), 1958-2010. "Carl Andre: Sculpture as Place, 1958-2010" at Dia Art Foundation, New York (2014-2015)
On his first acquaintance with the works of Tony Smith, Donald Judd, and Carl Andre, Cragg has said, “I was so impressed by Minimalism because it wasn’t loaded with unwanted imagery. Suddenly, minimal art had the great quality of changing the relationship between the art object and the spectator… it turned the onus back on the viewer to see what’s inside himself.” Indeed, many of his works from the 1970s, in particular Crushed Rubble (crushed bricks spread out over the floor) resemble iconic works from the movement. 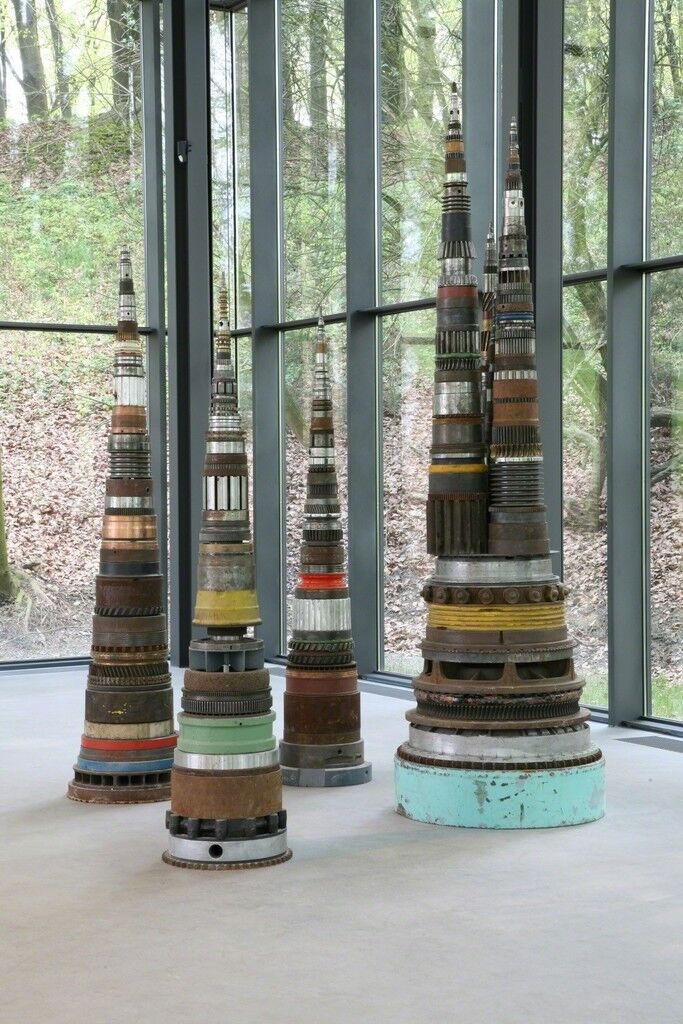 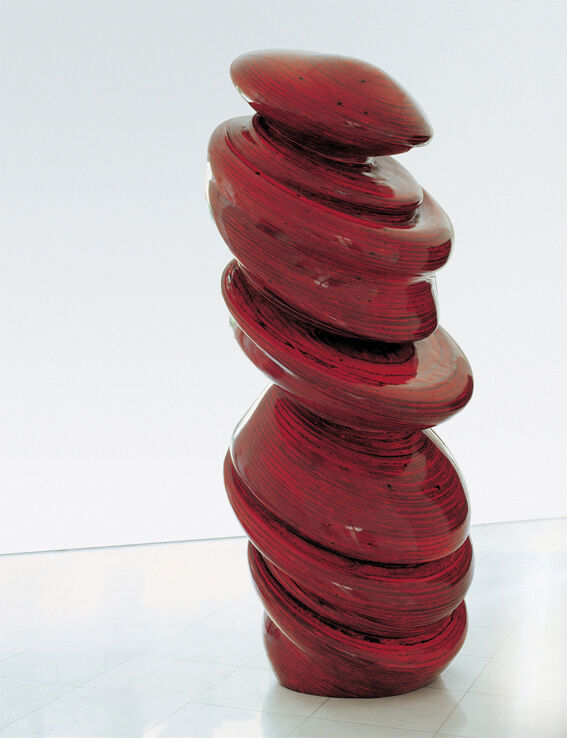 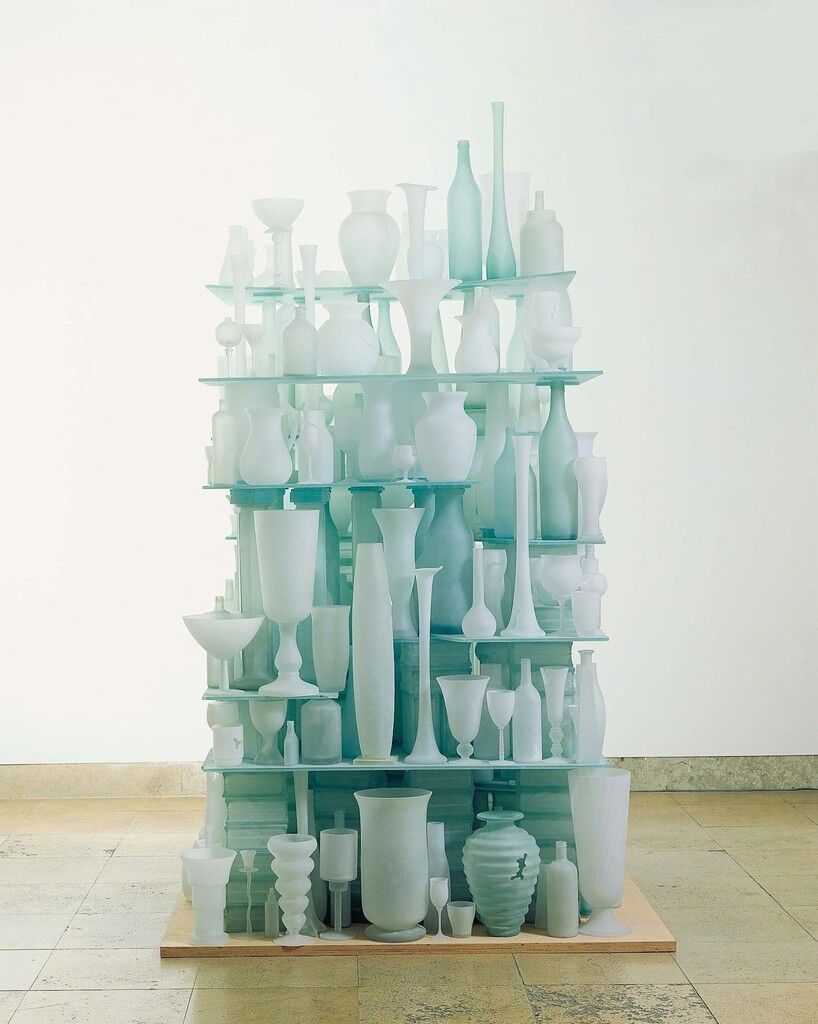 Tony CraggEroded Landscape, 1998. Tony Cragg: Seeing Things at Nasher Sculpture Center
In 1977, Cragg moved to Wuppertal, Germany, a modest, industrial city near Dusseldorf and began to develop his mature work, which in many ways synthesized the lessons of Minimalism with Land Art’s interest in nature. Cragg worked iteratively, as he does today, cycling through a form’s many permutations and slowly evolving his style as he worked on multiple objects at once—what he calls creating “species,” not series, of works. A transition along this trajectory, Minister comprises a series of four columns formed by stacking circular found objects, a compositional strategy that would inform his work for years to come and ultimately lead to the “Rational Beings” series. 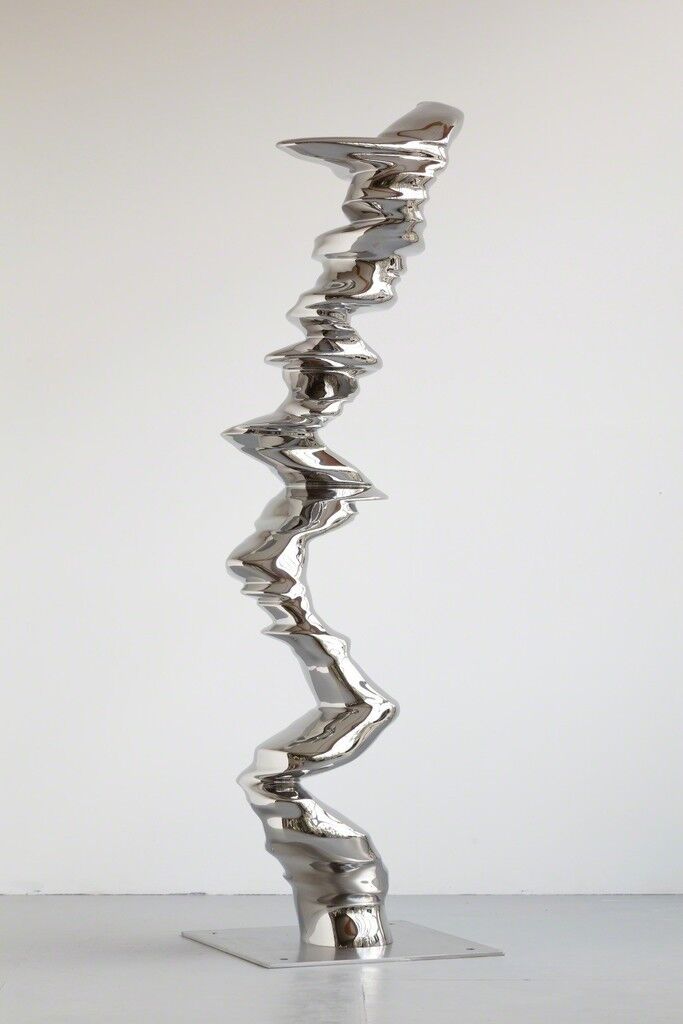 Tony CraggElliptical Column, 2012. "Tony Cragg, Sculptures and Drawings" at The State Hermitage Museum, 2016
While Cragg experimented with outsourcing the production of his work to a foundry in the 1980s, a process being adopted by many artists at the time to make large-scale, high-production sculpture, he quickly realized that he wanted to stay more involved in the process. Since then, he has worked in his studio with a group of assistants, directly engaged in the process from start to finish—a hands-on involvement that contrasts sharply with Minimalism’s use of industrial fabrication.
Rejecting what he calls the “simplicity” of Minimalism, Cragg’s works appear fractal and topographic, like geological formations. As with Discussion, they often reveal faces depending on the viewer’s angle. The resemblance is not coincidental, but rather born out of a deep seated interest in the natural landscape and our relationship to it. “When you see things in nature, they’re so complicated,” Cragg reflects. “I just would like to make things that have the same effect on me that looking at nature has on me.”
Explore Koller Auctions' PostWar & Contemporary sale on Artsy. Place max bids on works by Tony Cragg, Anselm Kiefer, Kazuo Shiraga and more. Live bidding opens Saturday, June 25th at 2pm CEST/9am ET.