1:54 Sees Market for Contemporary African Art Pushed beyond a “Trend” 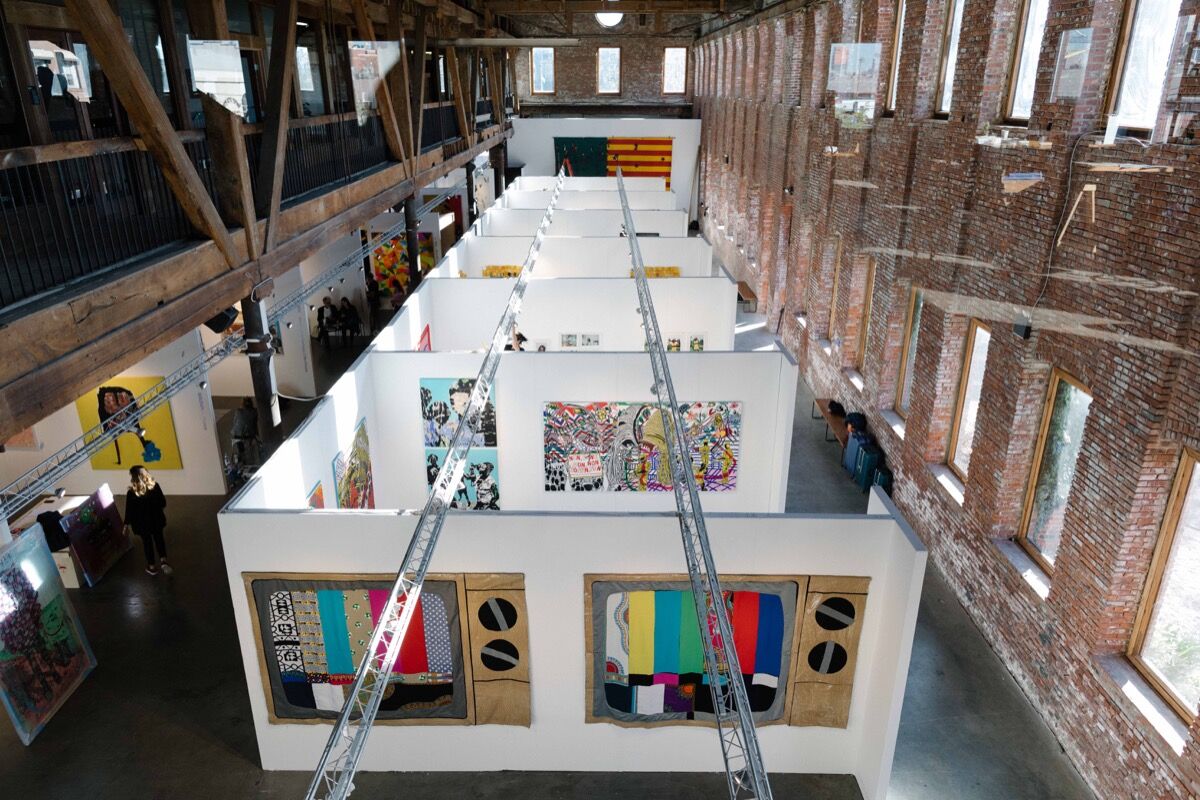 On Thursday, the third New York edition of 1:54 Contemporary African Art Fair opened to VIPs. And while some opted for the ferry to Frieze on Randall’s Island, which kicked off the same day, those who made the trip to Pioneer Works, the Red Hook home of 1:54, were rewarded with a lean showcase of 20 galleries that together form something of a thesis on the present and future of
contemporary African art
.
And across the venue and the curated panels and special projects, the quality and diversity of contemporary African art is on full display.
After four editions in London and two in New York, this year’s 1:54 comes amid exciting signs for African art’s market and institutional presence. A few examples: On May 16th, Sotheby’s will offer its first-ever sale of modern and contemporary African art. Last month, the Fondation Louis Vuitton’s massive three-part exhibition showcasing the rich depth of African art opened to the public in Paris. On the continent, the Zeitz Museum of Contemporary Art Africa (MOCAA) is slated to open this September in Cape Town. And 1:54 itself is gearing up for a third location: Marrakech. 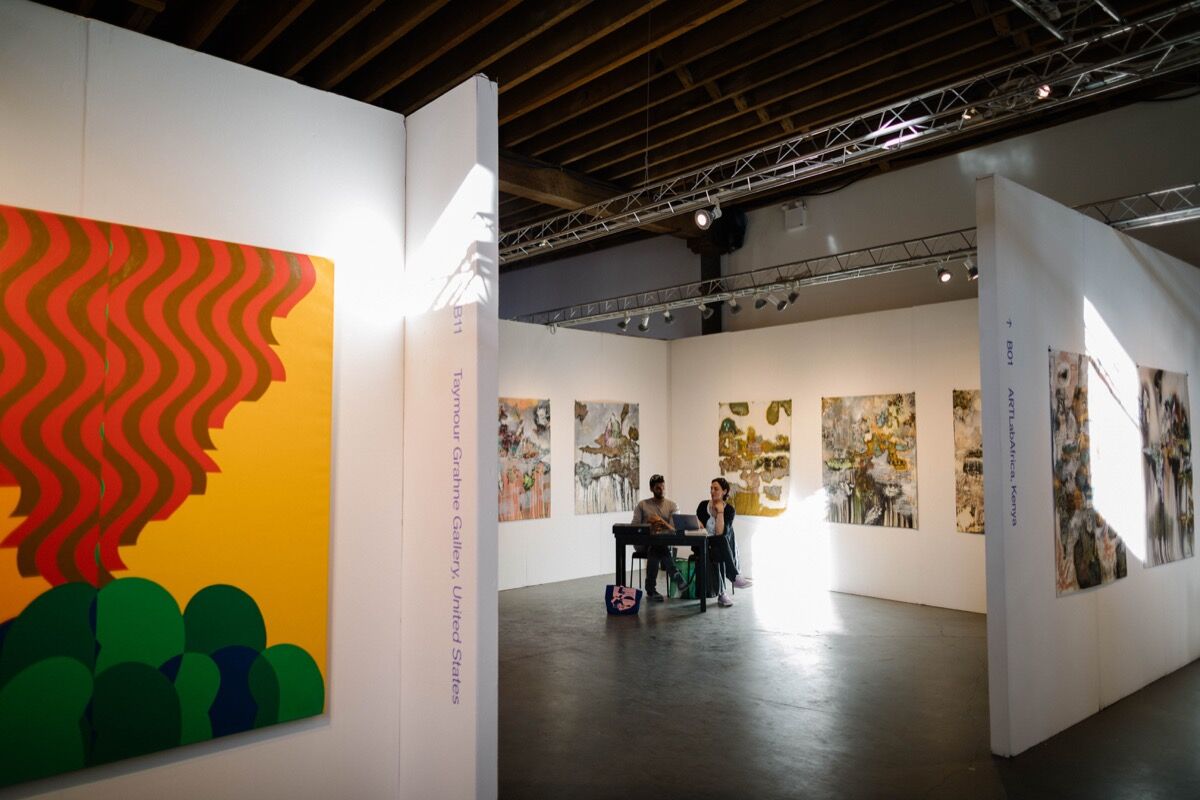 While many at 1:54 were happy for the art they love to be in the spotlight, they were quick to remind those first shifting their gaze to the continent that art from the African Diaspora “has been overlooked for years,” as founding director Touria El Glaoui put it. Her point is important to remember, given the broader art world’s tendency toward myopia when rushing to spot a “trend.” Don’t misinterpret the mainstream art market’s growing interest as christening the existence of contemporary African art.
“The work has been good for a long time. It just hasn’t been visible,” said Lavinia Calza, director of Nairobi-based gallery ARTLabAfrica. On view at the booth are works by
Paul Onditi
, one of the artists representing Kenya at next week’s Venice Biennale, and two had sold by Thursday morning, with another two on reserve.
But that lack of visibility is changing. “African art is the latest to have been discovered by the market,” noted Sitor Senghor, director of (S)ITOR gallery, standing beneath a 12.5-by- 20-foot flag by
Nú Barreto
. The iconography of Disunited States of Africa (DSA) (2010), priced at €50,000, will be familiar to an American audience, but Barretto’s recoloring of the stars and stripes also speaks to the multifaceted regions and cultures that exist on a continent of 1.2 billion people. 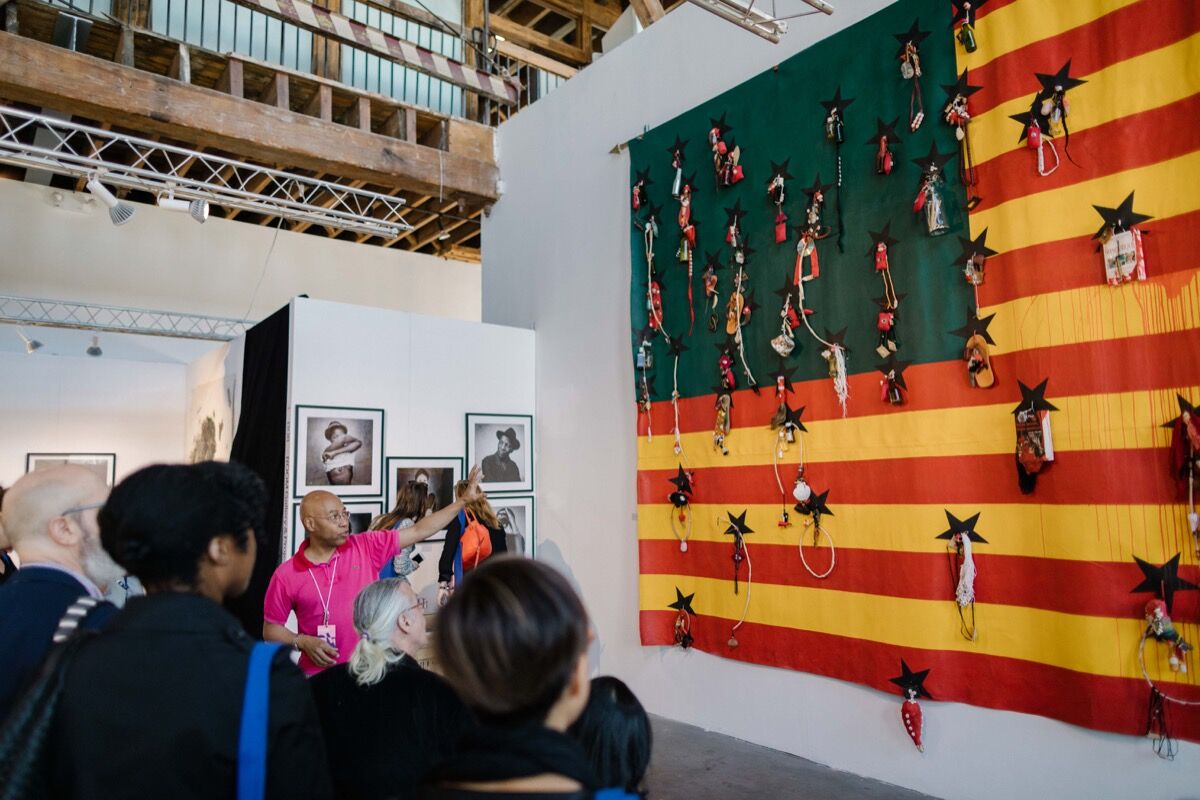 Advertisement
There is a star for each African country sprinkled across the piece, with symbolic objects—religious items, bottles, and French tour books—hanging from each one. A square patch in the upper left is painted a heavy green, representing hope that the legacies of colonialism can be overcome.
The stars make clear what should be obvious but can often go forgotten: Africa isn’t one single place, but lots of countries and cultures, with different histories, some of which have fared better than others. As a result, there’s a broad diversity of artistic practices and perspectives within the continent. And there are also artists on view at the fair who aren’t citizens of an African nation, but who hail from the Diaspora, or who engage with the continent in their work.
Of the 20 galleries with booths, eight are actually located in Africa—up from four last year. So what even is “African art”?
“[The term] baffles me,” artist
Serge Attukwei Clottey
said, standing in front of Ghana-based Gallery 1957’s booth. His sculptural works, priced between $12,000 and $25,000, are comprised of square cuts of large plastic oil jugs. Manufactured in the United States, the wan-colored containers are shipped to Africa, where, after the oil is used, they’re repurposed to hold water. By cutting the American plastic up in Africa and exhibiting it in its country of origin, Clottey is highlighting the uncertain terms of “African art.”
“What do we call this?” Clottey asked of his work. “I’m working in Ghana and I think about the entire world.” 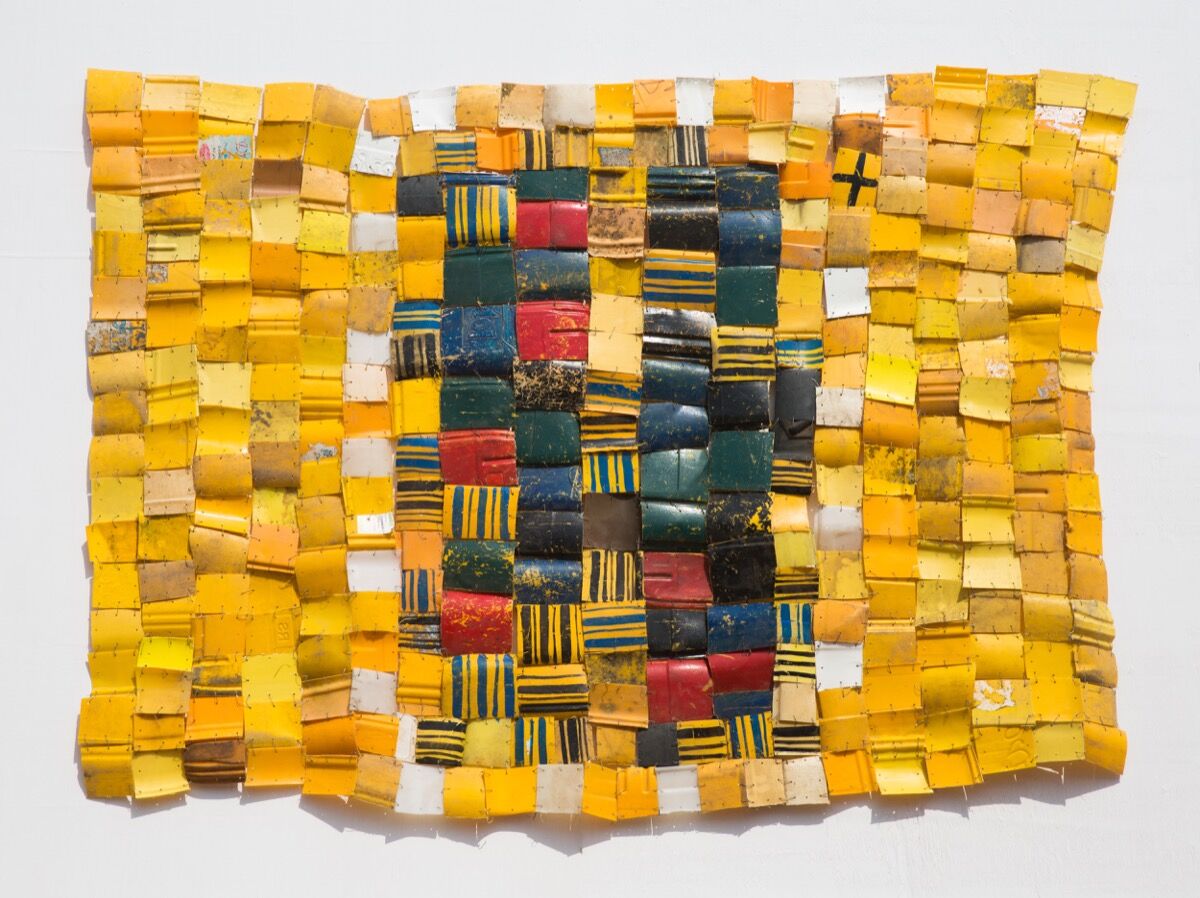 The criteria for the forthcoming Sotheby’s auction is primarily geographical. Ed Cross, founding director of his eponymous gallery, which is showing work by the artists
Kimathi Donkor
and
Modupeola Fadugba
at 1:54, was circumscribed about the potential for jaw-dropping, blockbuster results at the auction. That wouldn’t even necessarily be a positive, he said, if it creates a bubble that’s ultimately not sustainable. “The good thing is it’s a slow burn,” he said of the market for art from Africa and the Diaspora.
Aylin Seçkin, an art market economist and professor at Istanbul Bilgi University who was wandering the fair, was bullishly optimistic about the future of the African art market. That’s because demographics are on Africa’s side, she said. Africa is, after all, the youngest continent in terms of population age. “That means huge potential” for growth, she said. “That means a lot of African billionaires.” And that, in turn, means the development of a more secure domestic art market.
Another necessary condition for the institutionalization of African art is, well, institutional support. And that can be hard to come by in Africa compared to Europe, said Calza—although she notes that the digital infrastructure in Nairobi is improving. Calza also runs a nonprofit project space in the city to foster artistic talent.
Education about the diversity and history of African art is also lacking in the United States. Some of this is the fault of institutions—the Museum of Modern Art and the Met both lack contemporary African art departments. But that doesn’t mean museums aren’t taking steps forward. The MoMA just purchased a key work by the celebrated African modernist
Ibrahim El-Salahi
from Vigo Gallery, which also had a work of his awaiting a buyer at 1:54 as of Thursday morning. “When the institutions pay attention, the market follows,” said Pauline Giroux of Magnin-A, a Paris-based gallery showing 10 artists, including
Omar Victor Diop
’s powerful new series “Liberty” and a painting on fabric by
JP Mika
, who Giroux called the “face of new popular painting” in Kinshasa, capital of the Democratic Republic of Congo. That gallery was founded by André Magnin, a long-time advocate of contemporary African art who, among other institutional accomplishments, helped collector
Jean Pigozzi
assemble his 10,000-work-strong collection.
It is difficult to articulate what African art is. It is less difficult to envision the progress that must be made in order to ensure its broad acceptance and visibility. As the preeminent art fair for contemporary African art, 1:54 has played an important role in helping to craft a commercial base for the work, nudging it toward that goal.
“I’ve always said the best death for 1:54 would be that you don’t need it anymore,” El Glaoui said, with a smile.
Isaac Kaplan is an Associate Editor at Artsy.
Related Stories