Ilana Herzig
Sep 27, 2017 6:53pm
Most people still think of spray paint, tags, and murals when they hear the term
street art
. But increasingly, the genre can encompass everything from miniature wooden sailors set afloat in a river of urban rainwater, to rainbow-colored origami radiating across the facade of a centuries-old French church. Here are 10 examples of artists whose creativity and unique vision pushes the boundaries of what we consider street art or, more broadly, the expanding field of “urban intervention.” 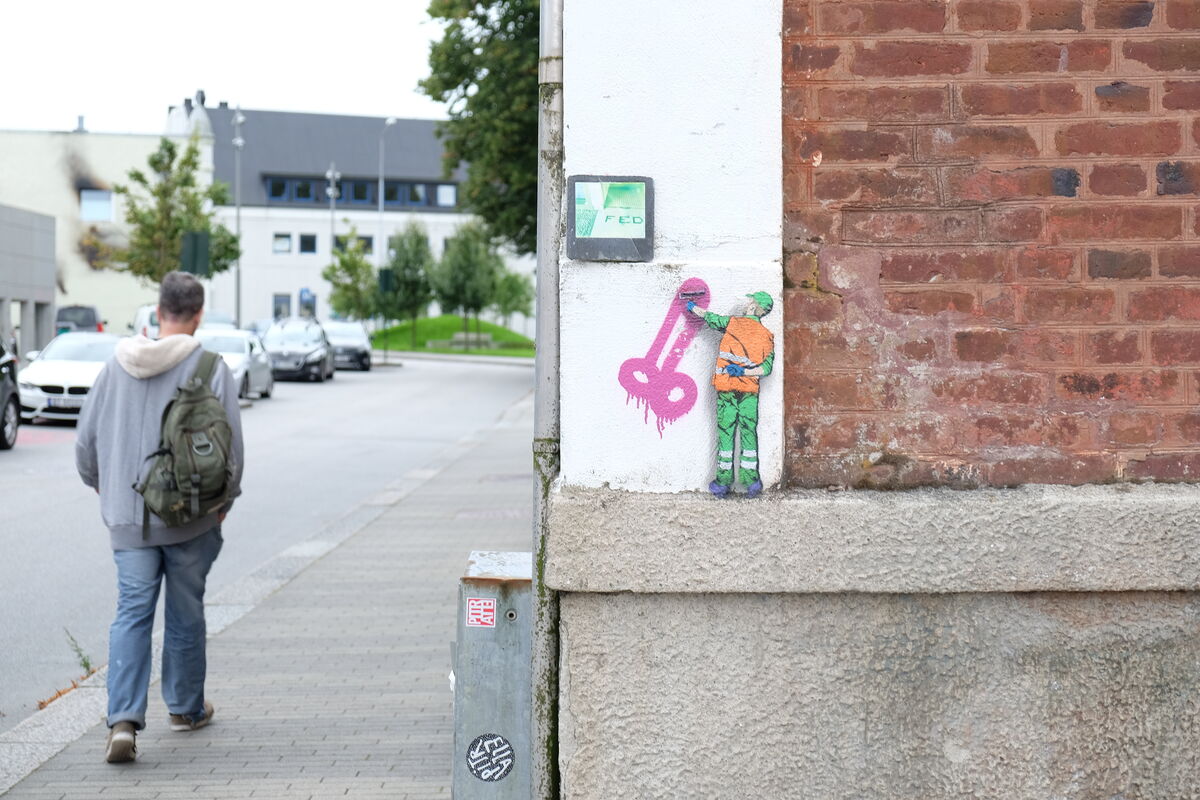 Mural by Jaune. Courtesy of the artist.

After studying graphic design in school, Jaune arrived in Brussels from the Belgian countryside. He was initially shocked by the bustle and disarray of the city, as well as its graffiti. The signature street art style he developed there involves minute, stenciled depictions of what he calls “little trashmen,” characters who interact playfully with existing urban architecture, street art, and scribbled tags—“narrating them a little bit,’ he says, “not to erase the graffiti, but to put a highlight on it.” He’s brought these miniature figures across Europe and beyond, from Scotland and Norway to Switzerland and Indonesia.
Jaune’s now-familiar stenciled forms, with their neon safety jackets and hard hats, carry multiple meanings. “The trashman,” he says, “is kind of the scavenger of our society.” he explains. “They are cleaning the world but they are insignificant, invisible.”
They are, however, always willing to lend a hand. Jaune recalls a woman who once solicited him to help cover up a troubling piece of graffiti near her home—a bright pink rendering of male anatomy. But instead of obscuring the phallic tag, Jaune added a tiny trashman who appeared to be painting the obscenity himself. To his surprise, the woman approved of the improvisation. “It was a brilliant moment.” 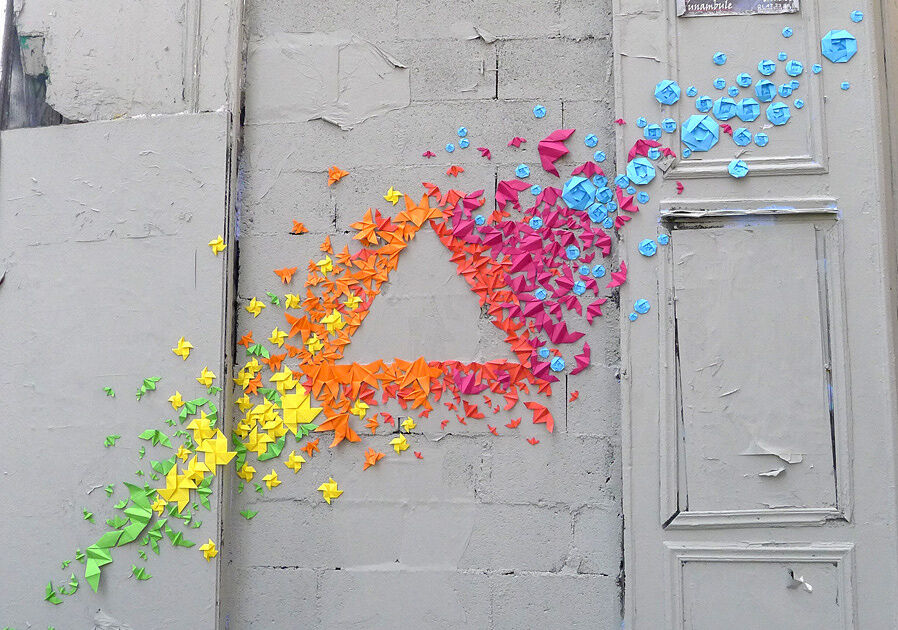 Mural by "Mademoiselle Maurice." Courtesy of the artist.

Advertisement
Known for a kind of multimedia, rainbow origami, Marie Saudin, aka Mademoiselle Maurice, cherishes the unrestricted context of working in public, a way to introduce art to people from any background. Born and raised in the mountains of Haute-Savoie, France, the artist studied architecture in Lyon before working in Geneva and Marseille. After spending time a tumultuous year in Japan—where she experienced 2011’s earthquake, tsunami, and the nuclear power plant explosion in Fukushima—Saudin’s origami work became inspired by Sadako Sasaki, a young girl who developed leukemia after exposure to Hiroshima’s nuclear radiation in 1945. As one version of the story goes, her classmates committed to fulfilling her mission of making 1,000 paper cranes, with which she was eventually buried.
Saudin’s own multi-colored paper cranes can now be found in energetic installations at museums, covering the facade of a psychiatric hospital with vibrant patterns, or creating triangles and radiating lines on a garden wall for an art fair. She also works in a more ephemeral, public context—papering bridges with two-tone portraits made up of miniscule folded bits creme and beige paper and along river banks in swaths of small geometric shapes that balloon out to fill crevices of someone’s face. Saudin’s work has been seen from Berlin to Colombia, and adorning the Saint-Maurice Cathedral, the banks of the Maine river, and London’s subway stations. Sometimes, the magnitude of her projects have required a little help—as with a 2013 project, in which she worked with locals and school children in Angers, France, to create an installation with over 30,000 pieces of origami. 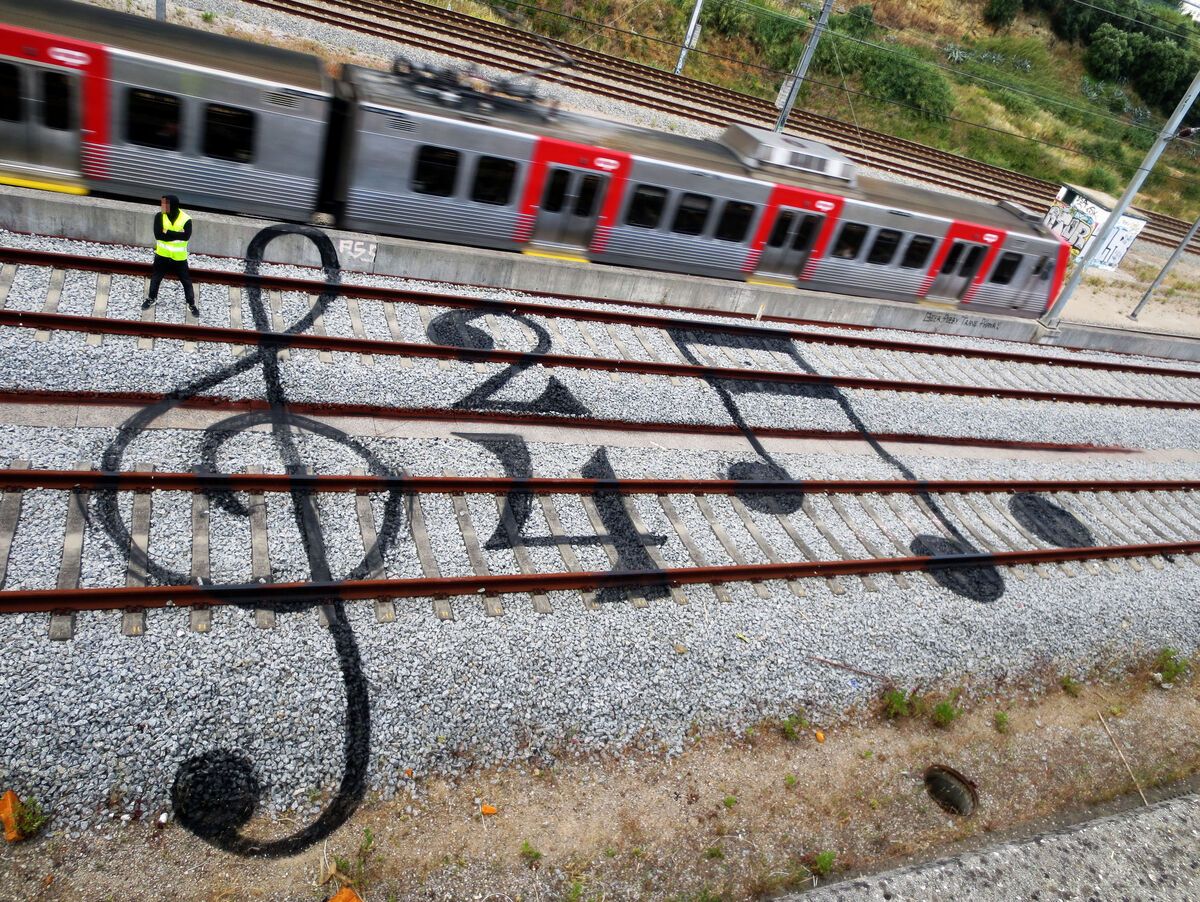 Work by Bordallo II. Courtesy of the artist.

Artur Bordalo, a Lisbon-born street artist, utilizes train tracks to activate his illustrations, whose colorfulness often belie more cynical takeaways. (He goes by Bordalo II in an ode to his grandfather, who had also painted the streets of Lisbon.) Using a palette of bright neons, Bordalo depicts imaged impending collisions of objects, affixing tongue-in-cheek titles. His railway series uses the train tracks as an inspiration and a guide; they become a musical score for swirling treble clefs in Music Online or, in The Game of Life, an enormous tic-tac-toe board filled with dollar and peace signs. 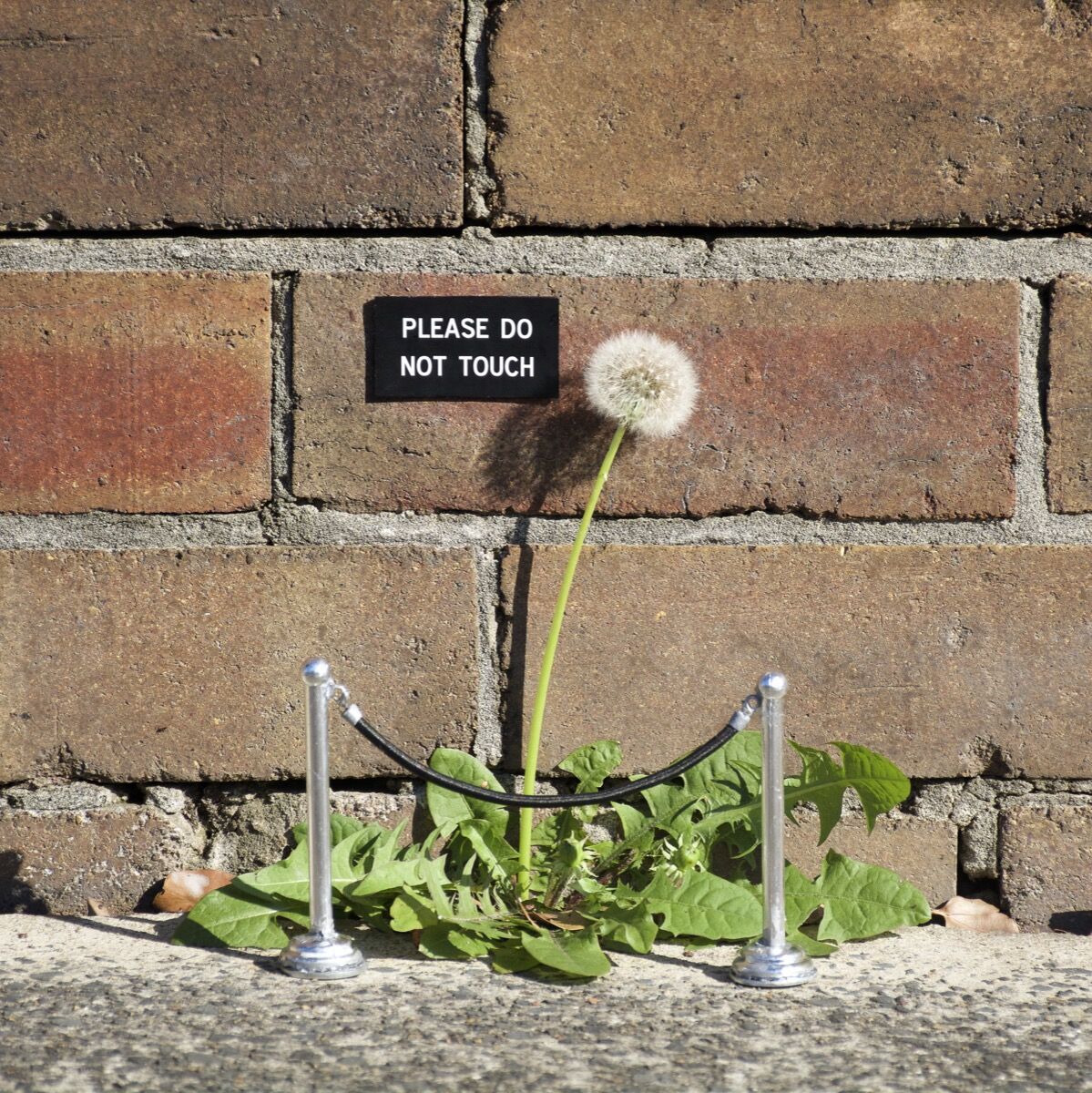 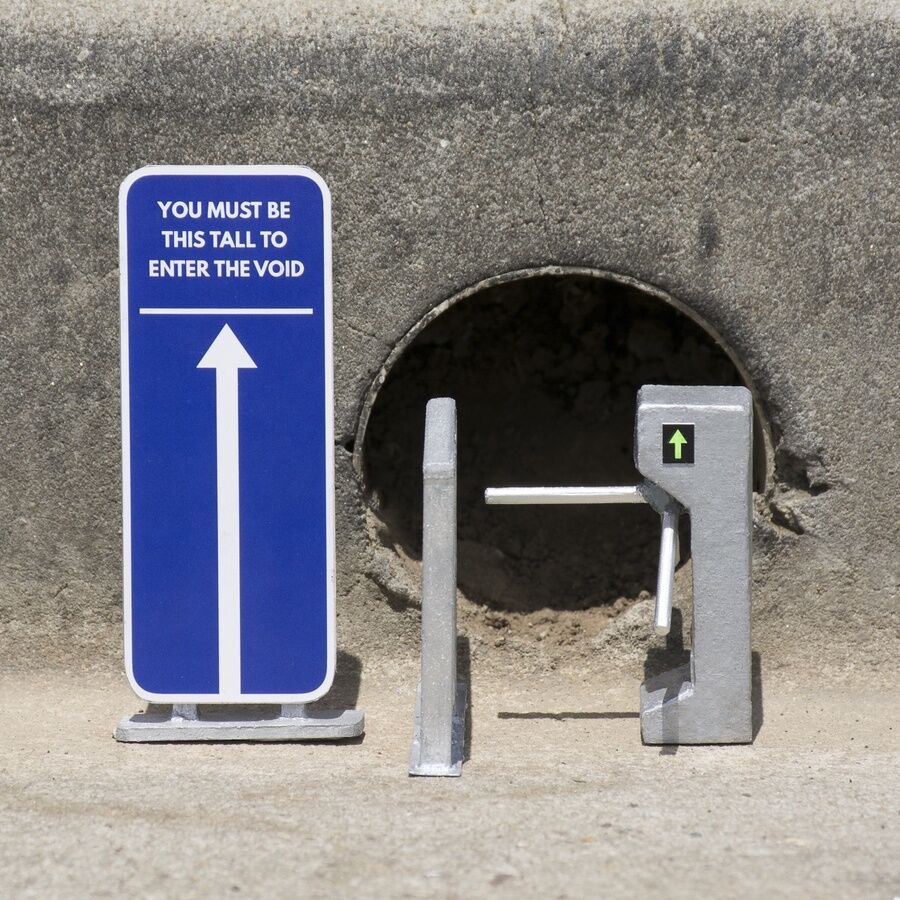 After trying his hand at painting and film, Sydney native and street artist Michael Pederson made what he calls a “slow journey” to street art. Incorporating image and text or noise and motion in humorous and often interactive public displays, Pederson’s witticisms subvert expectations by appropriating the look of standard urban signage. It’s “an opportunity to play with space in an unpredictable way,” he says, and a sure way to guarantee a chuckle (or dumbfounded confusion) from unwitting passerby.
He might install a museum-style velvet rope and a “Please Do Not Touch” sign before a single dandelion, or a place an EXIT sign pointing to a hole in shrubbery. Occasionally, his mimicry of official signage is so artful that the public simply assumes his work is legitimate. “A security guard once caught me installing a piece, and simply gave me the thumbs up before walking away,” Pederson recalls. Whether warning of a height restriction for entering “the void” (an old pipeline for sewage) or commemorating a four-minute, 32-second awkward silence on a park bench, Pederson’s quips interrupt the daily routine, and question the very idea of authority. 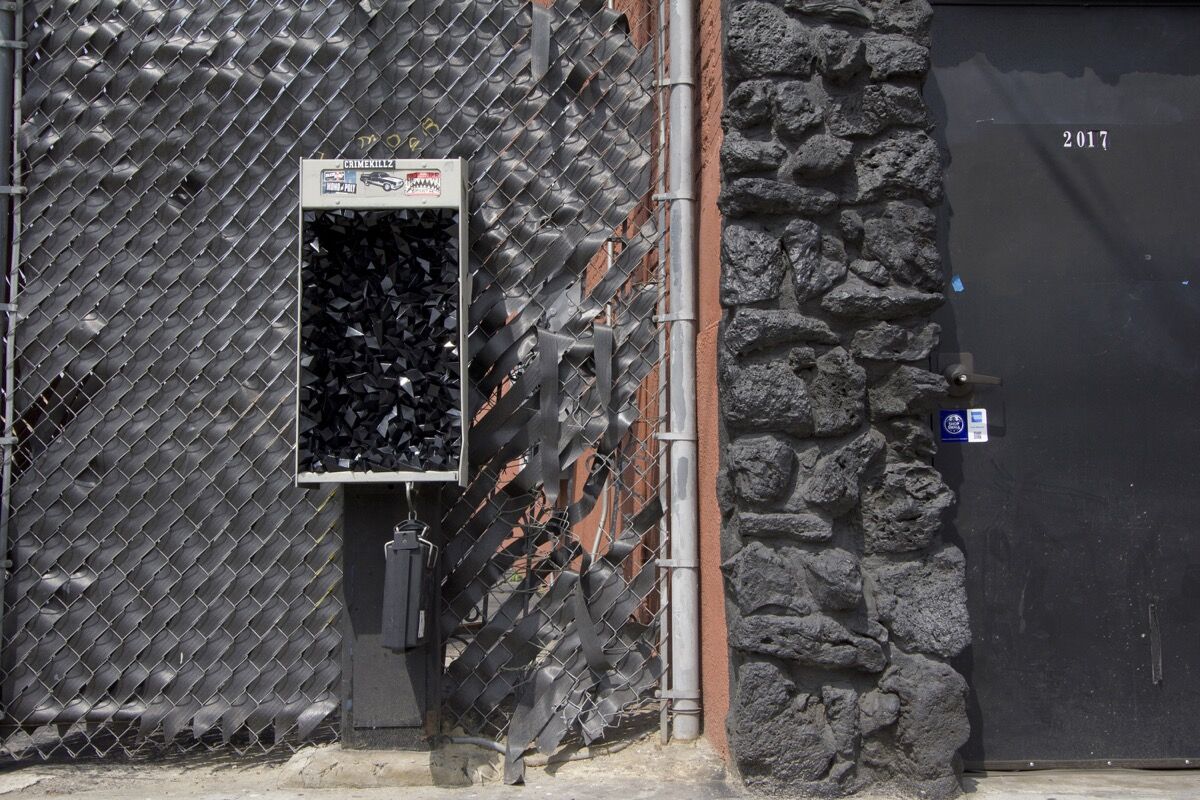 Paige Smith, who goes by the moniker A Common Name, is inspired by the magical realism of writers Gabriel García Márquez and Haruki Murakami—enamored of the serendipity of encountering something whimsical or fantastical in the everyday. She began using paper geodes to adorn neglected spaces in Los Angeles or fill the “holes and cracks in the city,” she explains.
Her site-specific installations with paper (or resin, as her practice evolved) are tailored to the range of places she works in, from Dubai, Istanbul, and Madrid to Philadelphia and her own native Texas. While she enjoys the ephemerality of creating in a public context, Smith also designs installations for gallery spaces, where people can buy her spiked, faux-crystal formations. (The white cube doesn’t “quite have that same effect,” she admits, “of stumbling upon the art” in the wild.) The artist’s renegade interventions will soon introduce her to an even broader audience: Next spring, she’ll unveil an installation at Los Angeles International Airport. Russian street artist Nomerz has been animating abandoned buildings across his native country, famed for what the Huffington Post has called “industrial makeovers.” He gives a strange new life to ruins in Nizhny Novgorod, St. Petersburg, and Pikalyovo, utilizing collapsing roofs or crumbling walls to reinvent the flaws of forgotten structures. Initially pursuing a more traditional graffiti practice in London and Moscow, Nomerz began experimenting with a new way of personifying architecture, both in the city and the sprawling countryside.
By painting on expressive facial features, he gives character to his edifices: a melodramatic scream, placid gaze, or boisterous laughter. After he’s worked his magic, a lanky water tower might sport a white-wisped beard; cottage windows become a pair of glasses; doorways transform into gaping mouths. 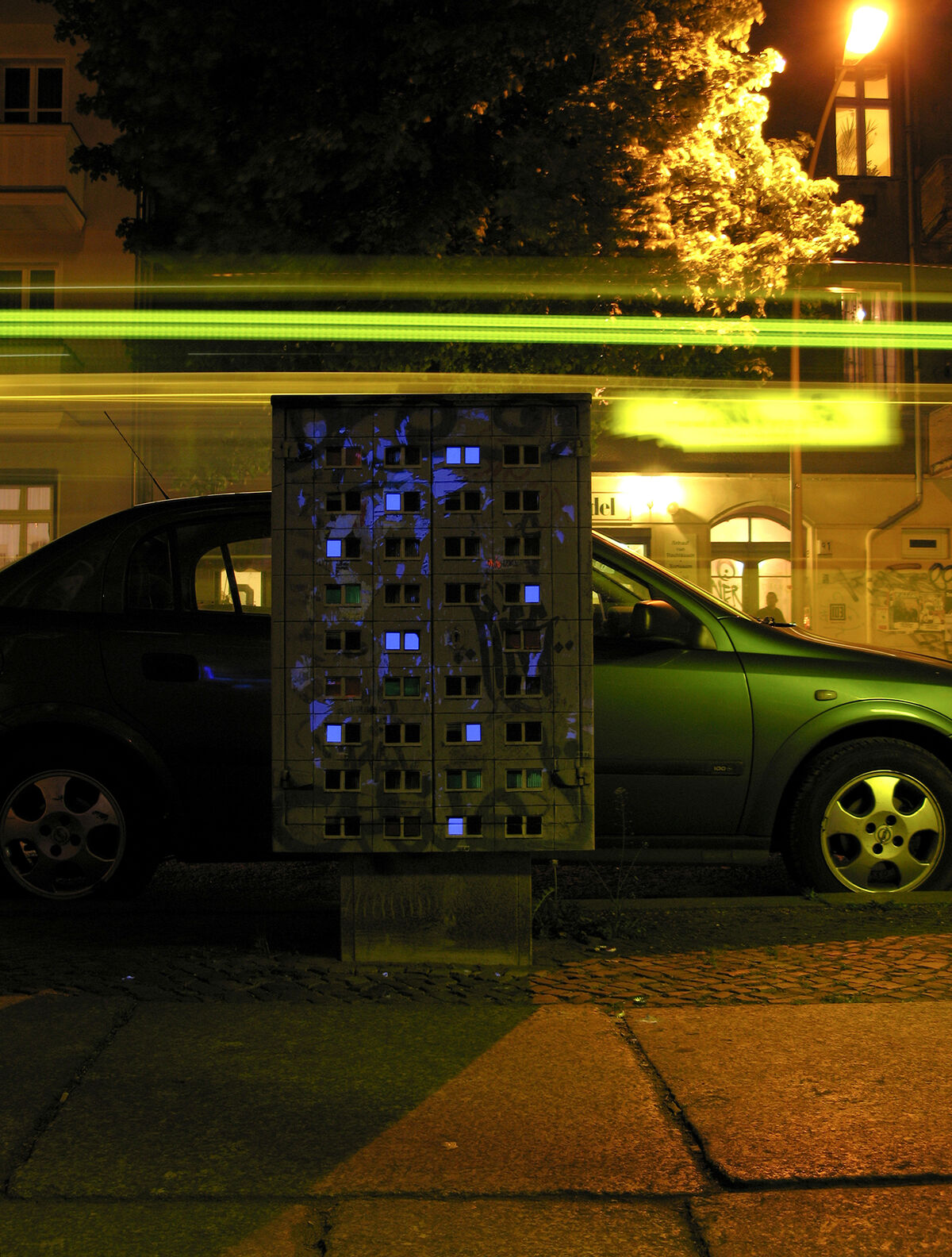 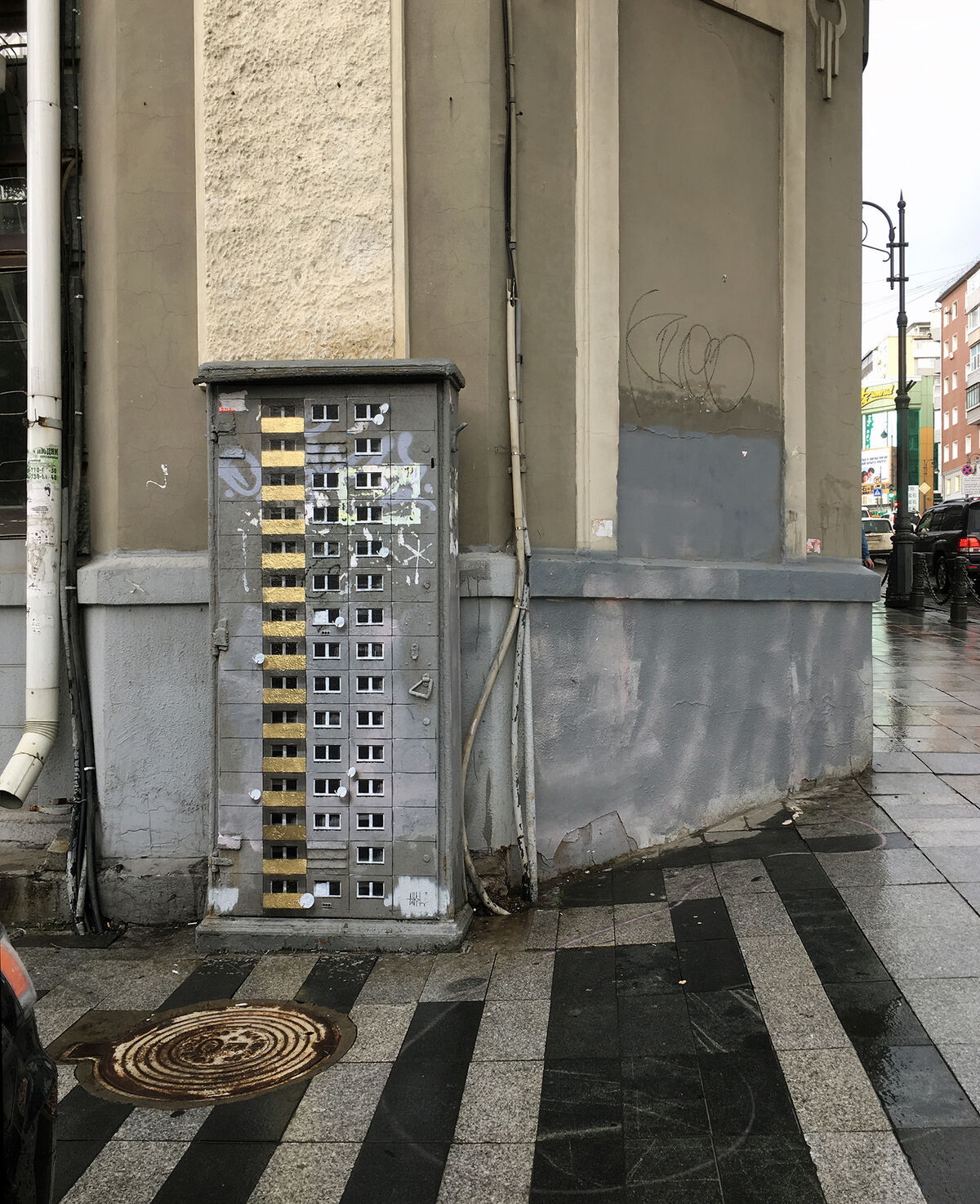 Evol, Gold is the New Grey, Vladivostok, Russia. Courtesy of the artist.

Evol moved to Berlin in the early 2000s, falling into the “huge family” of Berlin graffiti artists. There, he became inspired by what he calls the “functional furniture” of the city—its omnipresent electrical boxes—as well as the post-war architectural styles of socialist East Germany and Russia. After the fall of the Berlin Wall and the commercialization of the urban center, the monotonous cement blocks that housed workers were generally exiled to the lower-income outskirts.
“The idea,” he explains, “was to bring them back to the city center.” He began to build “small monuments” to such architecture, painting the facades of miniature apartment buildings on electrical boxes, concrete slabs, or sections of cardboard. Fraught history notwithstanding, “it’s also a very playful thing,” he explains. One of Evol’s creations came together serendipitously when he realized the blue fluorescent UV light from a storefront reflected off of the torn poster on an electrical box opposite it. He turned rectangular scraps of paper into miniature windows of his imagined building, to make it appear like they lit up at night. 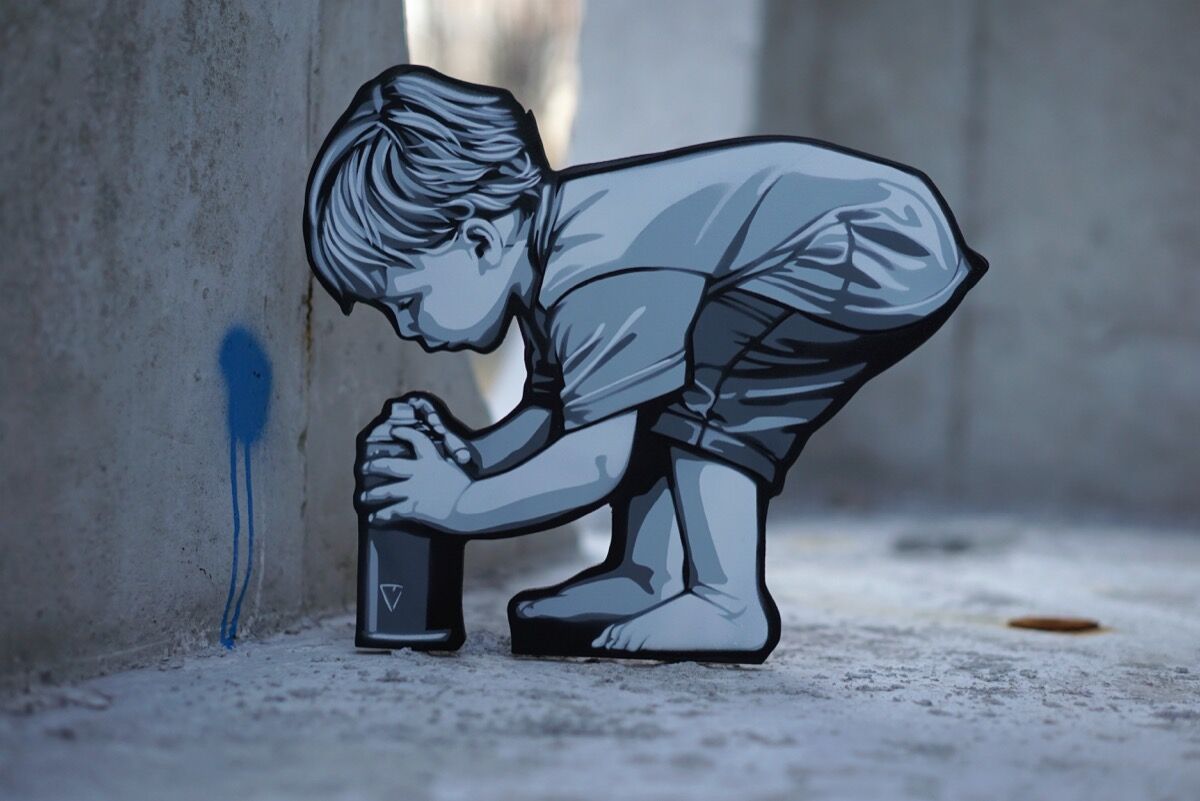 Inspired by the likes of
Banksy
and
Shepard Fairey
, Iurato decided to put a novel spin on the stencil template, bringing his painted-wood characters off the wall and into three dimensions. Unlike his street art heroes, he aims for a more scaled-down, intimate experience, intended for the fortunate few passersby who happen upon his creations. They might be found skateboarding on Brooklyn fire hydrant, bundled up under a bridge on the Hudson during a frigid New York winter, tipping a hat on railroad tracks framed by fall foliage, or playing guitar on a lamp post in Sweden.
Born and raised in Cedar Grove, New Jersey, Iurato initially worked anonymously in the early 2000s, but by 2008 he stepped out of obscurity and turned his passion project into a full-time gig. He now shows in galleries, too, but still values the liberation he finds in conceiving and setting a stage in the streets. “It’s often difficult to tell the story in the same way [in a gallery],  because you don’t have the environment to play with,” he says. Even though the scenes he creates outdoors are fleeting, Iurato always documents his handiwork before it disappears. “The photograph,” he explains, “becomes the final piece of artwork.” 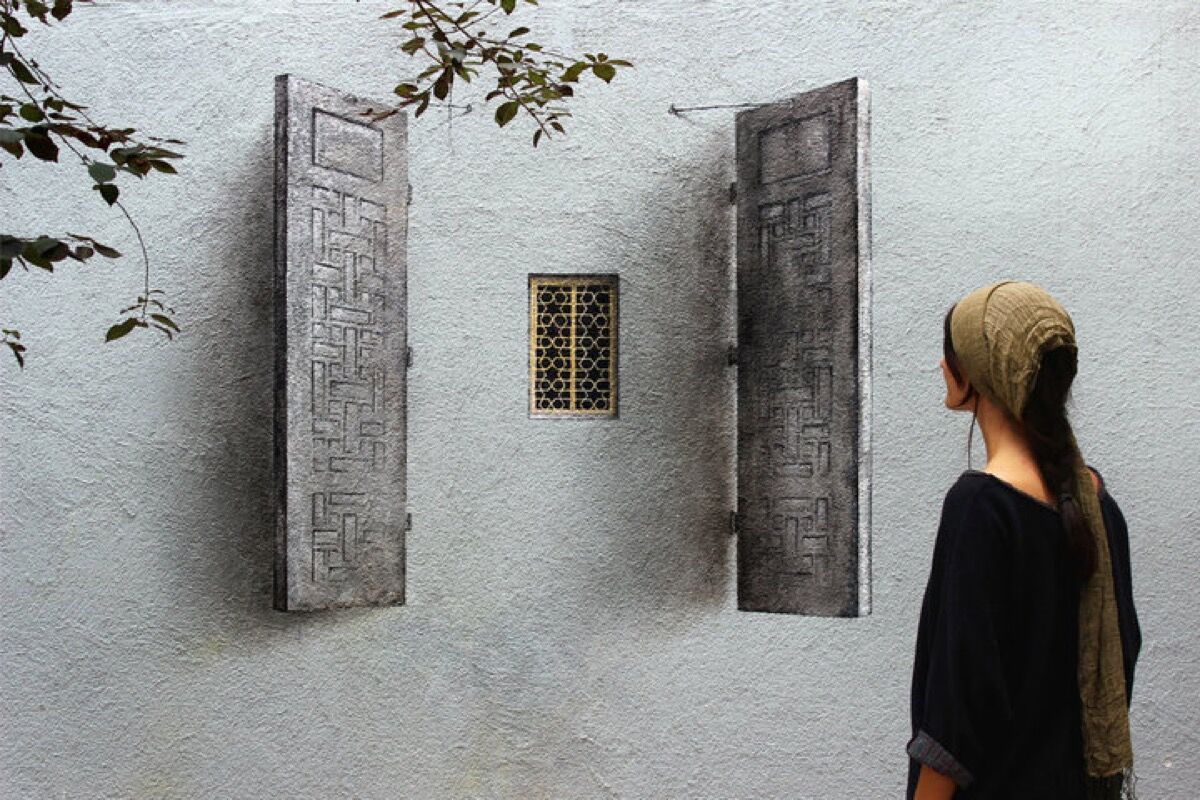 Barcelona-based artist Pejac creates dazzling trompe l’oeil images, painting on walls and doors to conjure ornate windows, lush curtains, and tucked-away passageways. He’ll break the shapes of birds into the glass of derelict windows, or add the silhouettes of human figures (like a boy ready to fire a slingshot). Or he might manipulate deteriorating cement to achieve effects like that of a wearied group burdened with belongings while crossing a desert. His work has taken him from a residency in Croatia at Rijeka’s Museum of Modern and Contemporary Art to mural-making in Hong Kong, Seoul, and Tokyo for his site-specific interventions. One of his most inventive series, 2014’s “Blind Windows,” was completed in Istanbul, where he painted false windows on city walls—their shutters seemingly flung open to a reveal curious gold-wire grates or fantastical keyholes. 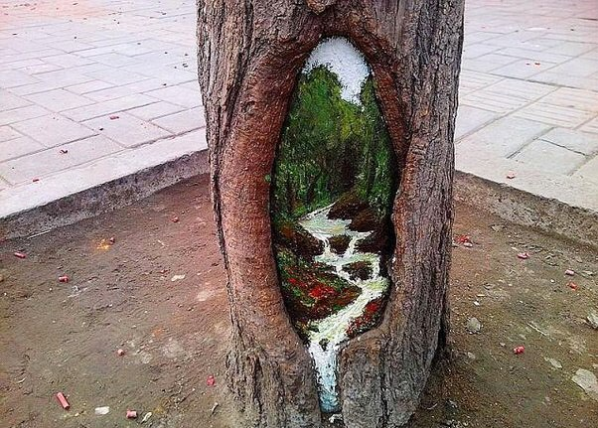 Work by Wang Yue. Photo by @alinaseliver via Instagram.

After studying visual communications at Dalian Industry University, Wang Yue pursued an uncommon niche: adding painted compositions to holes in the bark of trees. Working in the Hebei Province of Shijiazhuang, China—a largely concrete-bound metropolis—she creates subtle portals to nature. After choosing a suitable leaf-clad oak or laurel, she makes a digital sketch that is then rendered on the exposed wood—scenes of a frothy river snaking its way through green foliage, a pair of raccoons peering out at onlookers, or a burnt-orange sun setting over a placid lake beneath a pastel sky. Endorsed by the environmental protection bureau, Wang’s colorful, bucolic creations have also been praised by residents (perhaps not surprising in a greenery-starved city that boasts some of the lowest air-quality in the world).
Ilana Herzig
Related Stories