Alina Cohen and Casey Lesser
May 21, 2019 12:57pm
While the Venice Biennale gives a platform to countless artists from around the world, a few inevitably steal the show. Here, we share the names of the acclaimed artists who presented the work that challenged and inspired us, and most importantly, got us talking. From the Golden Lion winners to the artists whose works became Instagram sensations, we share the names of emerging and established artists who we’ll be seeing long after the Biennale. 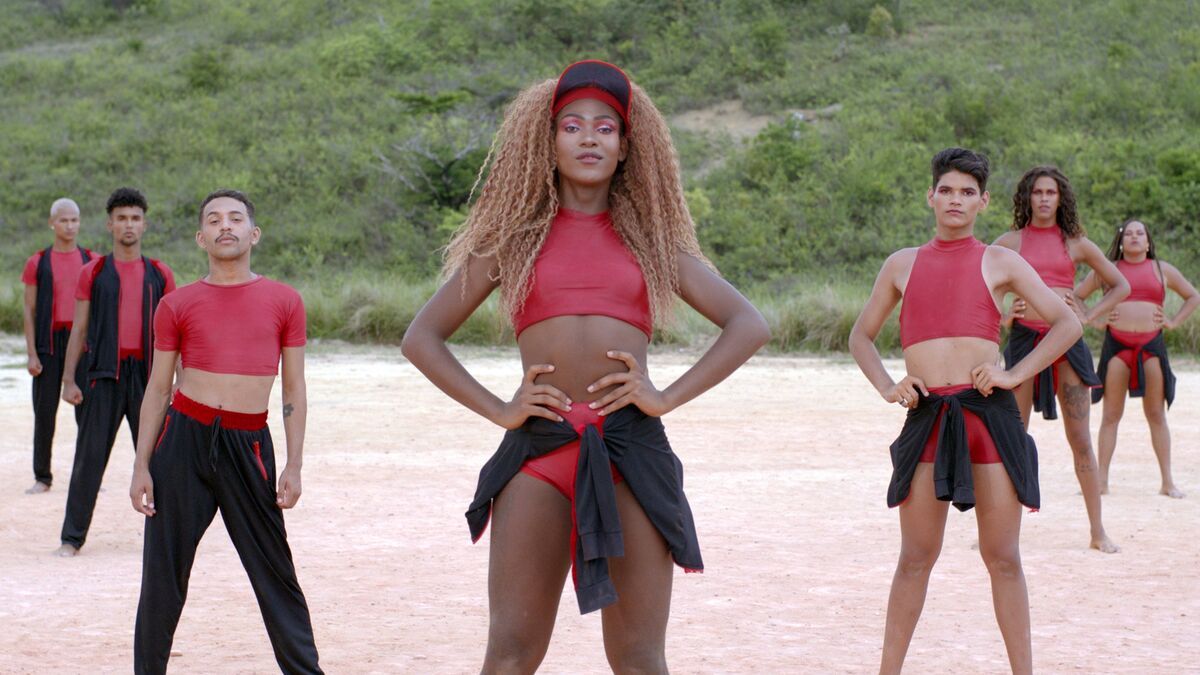 In representing Brazil at the Biennale, filmmaking duo Barbara Wagner & Benjamin de Burca spotlit the underrecognized Swingueira dance groups of Recife, Brazil. Their captivating film sees the young dancers, many of whom are black and identify as non-binary, undergo strenuous rehearsals and elaborate performances that reflect on the passion and struggle of their everyday lives. The film is a collaboration with the dancers rather than an anthropological study of them, presenting a fresh mode for artists to engage with and give a platform to marginalized groups.
The artists have taken this tack before, previously working with singers in Germany to give a platform to the divisive Schlager musical sensation for their 2017 project for Skulptur Projekte Münster. Beyond Venice, the artists’ work is currently resonating internationally. They are currently showing their films at Amsterdam’s Stedelijk Museum, Miami’s Pérez Art Museum, and Dublin’s Temple Bar Gallery and Studios. 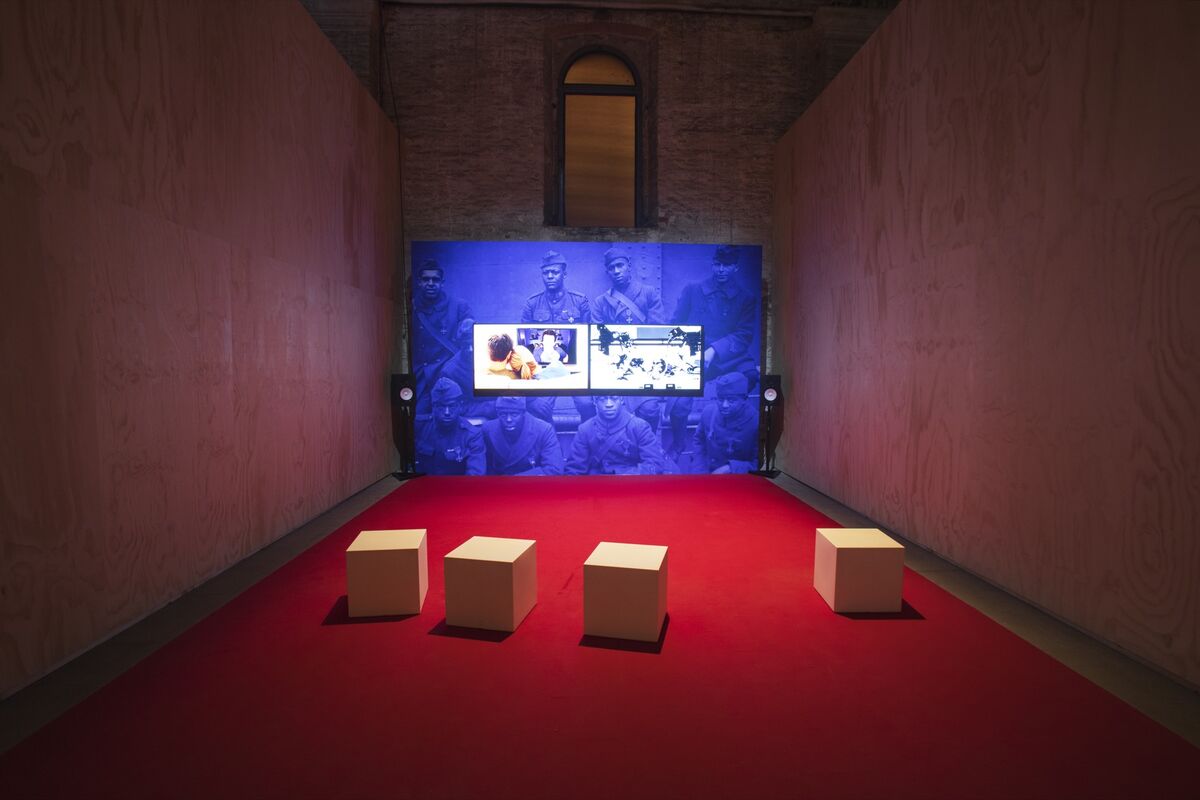 Advertisement
Filmmaker Kahlil Joseph proposes an alternative to our humdrum news channels, many of which cater to white audiences. His addition to the Biennale, entitled BLKNWS (2018), features an entertaining, fast-paced collation of recent news items tailored to a black audience. Actress Amandla Stenberg and curator Helen Molesworth serve as news anchors. Multitalented and clearly well-connected, Joseph has previously worked on Beyoncé’s Lemonade (2016), a video short entitled Until the Quiet Comes (2012)—a collaboration with musician Flying Lotus—and various other film projects. Yet the Biennale presentation suggests that he’s a valuable asset to the worlds of media and art, as well. Institutions ranging from the New Museum to the Tate Modern have already shown Joseph’s work. He’s currently a visiting artist at Stanford University, in its Presidential Residencies on the Future of the Arts program. 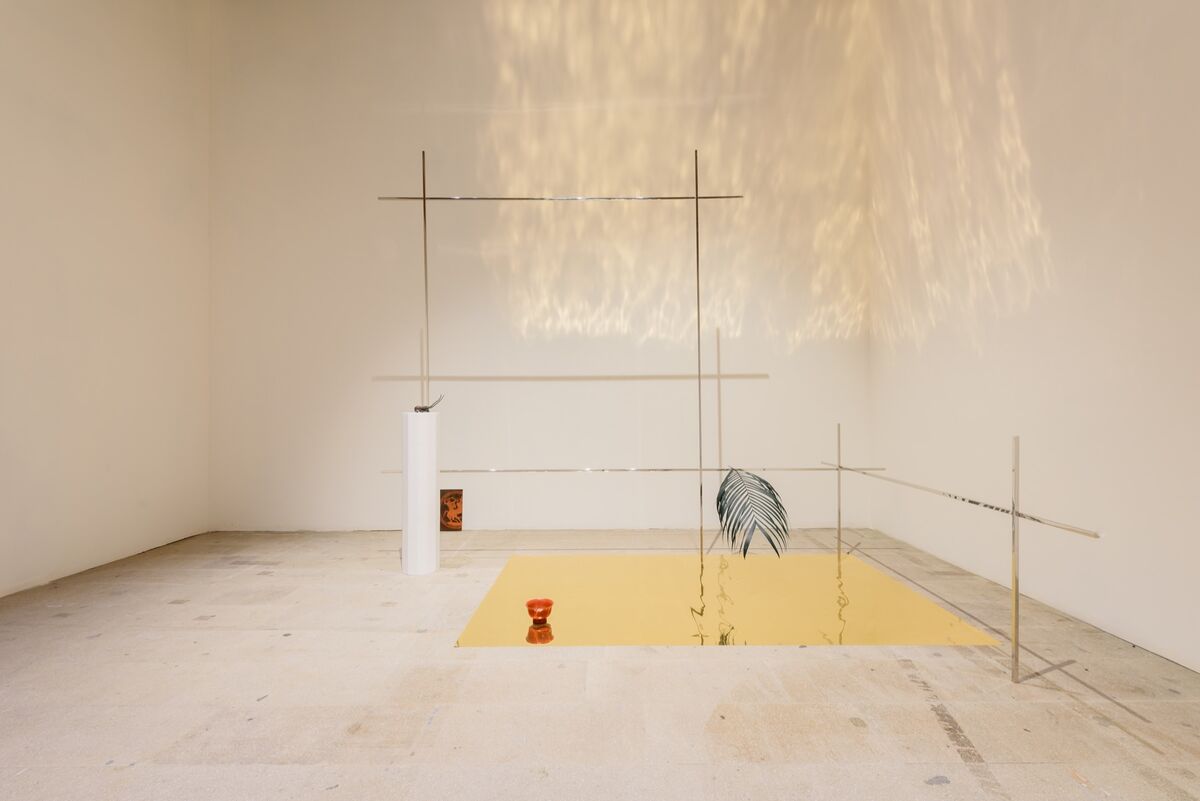 Cyprian artist Haris Epaminonda’s beguiling work VOL. XXVII (2019) fills a large suite at the Arsenale, intervening in the architecture of the old armory. She’s laid down a white floor and a series of white platforms that support black or white columns. Around the rooms, Epaminonda has scattered and hung various objects: small statues of a horse head and a black bird; a relief depicting mythical creatures; and framed texts about a “river goddess” and a “white tiger (one of four gods).” All together, they suggest that the installation is some ancient ritual site that juxtaposes elements from myriad religious traditions. The viewer sees each piece as part of Epaminonda’s larger, Silver Lion–winning puzzle. The artist, who is known for similarly spare conjunctions of found materials, is enjoying a solo presentation at Brescia’s Massimo Minini gallery through June 15th. She’s also showing work at Berlin’s Gropius Bau in the group show “And Berlin Will Always Need You,” up through June 16th; and at the Werkleitz Festival in Dessau, Germany—a celebration of the
Bauhaus
that extends through June 10th.

Chinese duo Sun Yuan & Peng Yu made two of the Biennale’s grandest gestures with their entries, Dear (2015) and Can’t Help Myself (2016). The former features a massive silicon chair with a black hose whipping out of it and striking the cage that encased it. The latter consists of a giant robotic paintbrush that continuously sweeps up blood-red paint. Crowds have swarmed—the works’ spectacular violence appeals even to the suited-up art crowd. The pair have made a career out of shock and awe tactics: Their materials have ranged from live animals to baby cadavers. They’ve exhibited internationally at institutions ranging from New York’s Solomon R. Guggenheim Museum to the Museum of Contemporary Art in Lyon, France, and the Biennale presentation. Their uniquely grotesque, Instagram-ready aesthetic bodes well for their continued popularity. 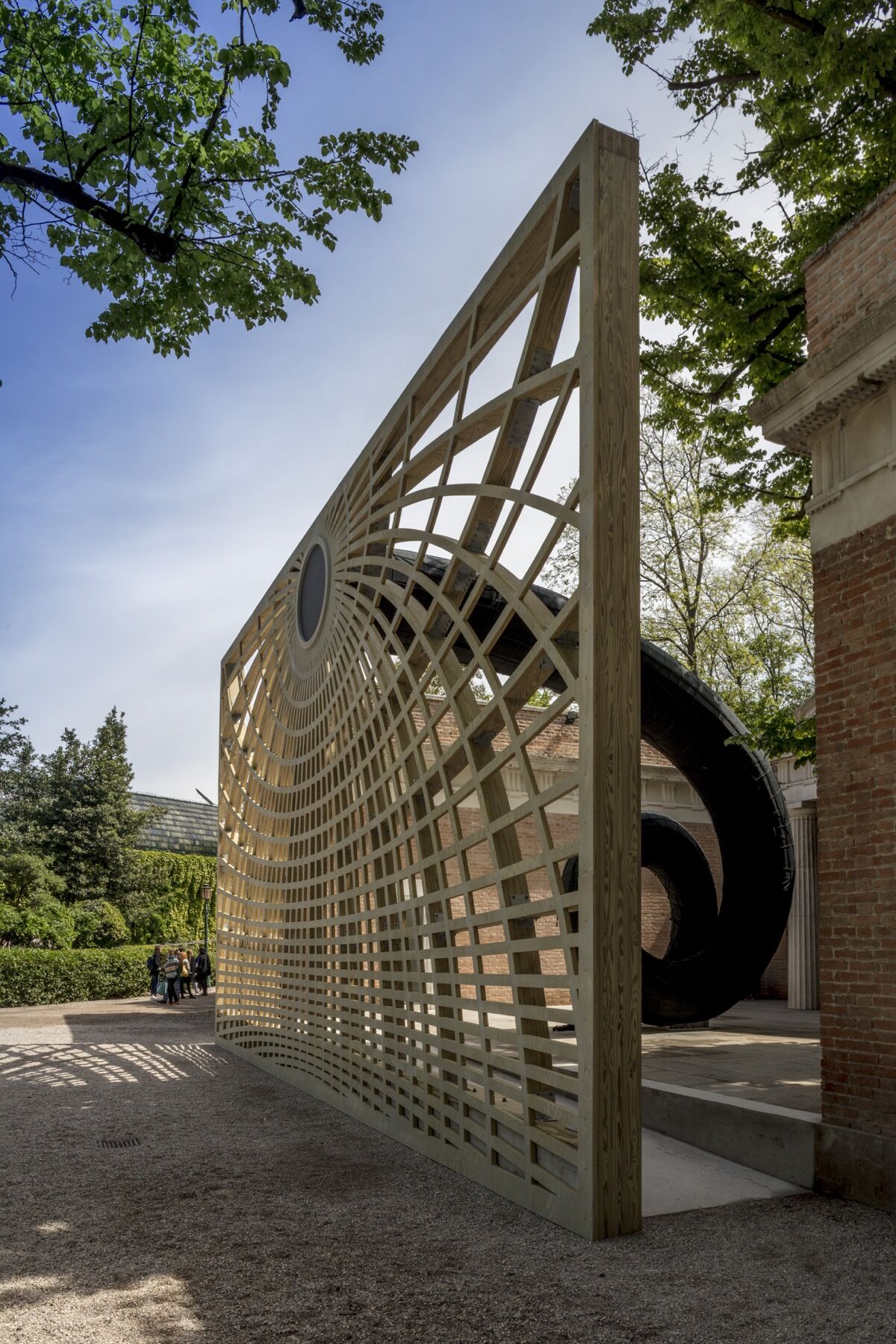 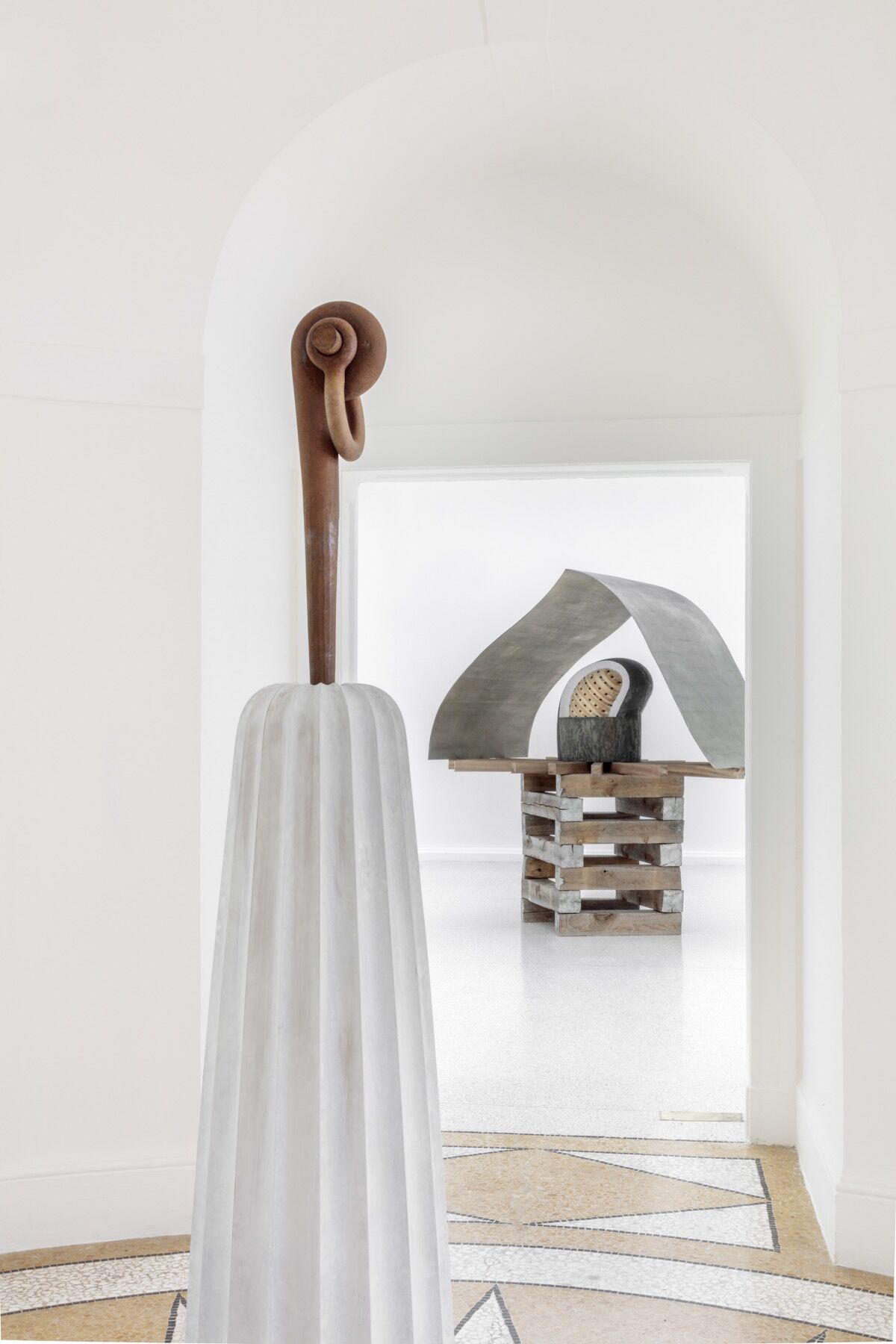 Martin Puryear made a moving statement by obscuring the American pavilion with an elegant wood screen. The building, erected in the 1930s, was an homage to Monticello, the home and working plantation of slaveholder Thomas Jefferson in Charlottesville, Virginia. Inside the pavilion, visitors encounter the artist’s signature form, the Phrygian cap—a symbol of liberty that dates back to antiquity—and just beyond it, a sculptural ode to Sally Hemings, the slave who birthed Jefferson’s children.
The pavilion was sponsored by New York’s Madison Square Park Conservancy, which also commissioned Puryear’s monumental 2016 sculpture Big Bling. That public work—a looming construction of wood and chainlink fence, with a golden shackle—traveled from Madison Square Park to Philadelphia and will be shown at MASS MoCA.
Known for his historically engaged, deftly hewn wood forms, Puryear has honed his woodworking skills since the 1960s, when he learned the craft techniques of West Africa, while serving in the Peace Corps. In his five-decade career, he’s continued to use such techniques to develop organic forms that speak to the natural world, African-American history, and salient cultural issues. 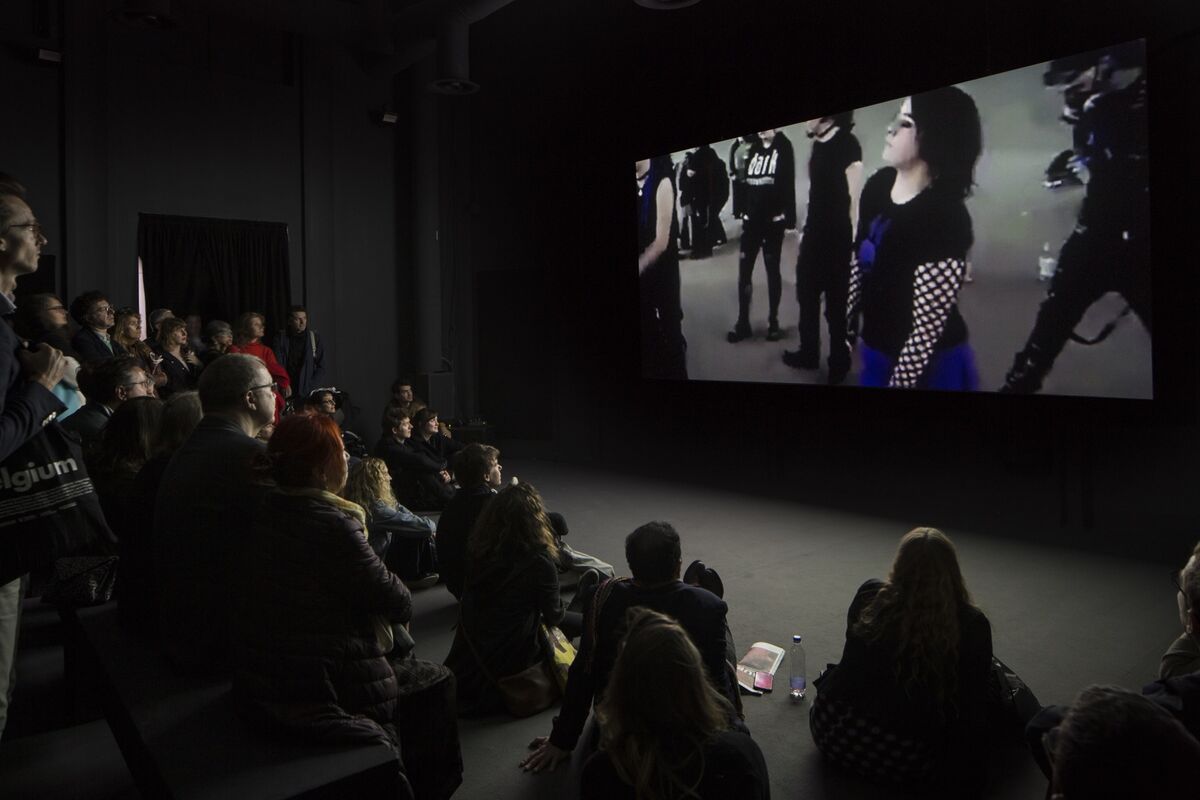 Arthur Jafa wants to unsettle Biennale visitors—and he is succeeding. Winner of the Golden Lion prize, the lauded filmmaker presented a damning examination of white supremacy with his film The White Album (2018). The work, which follows up his celebrated 2016 video Love is the Message, The Message is Death, unites quick clips of found cell-phone and internet footage. Together, they offer a pointed portrait of the dangers of “whiteness.” One white woman offers that cringeworthy phrase that so often precedes prejudiced language: “Let me start by saying that I am the farthest person from being racist,” she says. In another fragment, a bearded man wields a massive gun—Jafa asserts that the dangers to blackness span the linguistic to the corporeal. A traveling show, entitled “A Series of Utterly Improbable, Yet Extraordinary Renditions,” will bring his work to Stockholm’s Moderna Museet and Prague’s Galerie Rudolfinum. The Louisiana Museum of Modern Art in Humblebæk, Denmark, will host a Jafa solo exhibition in 2020. 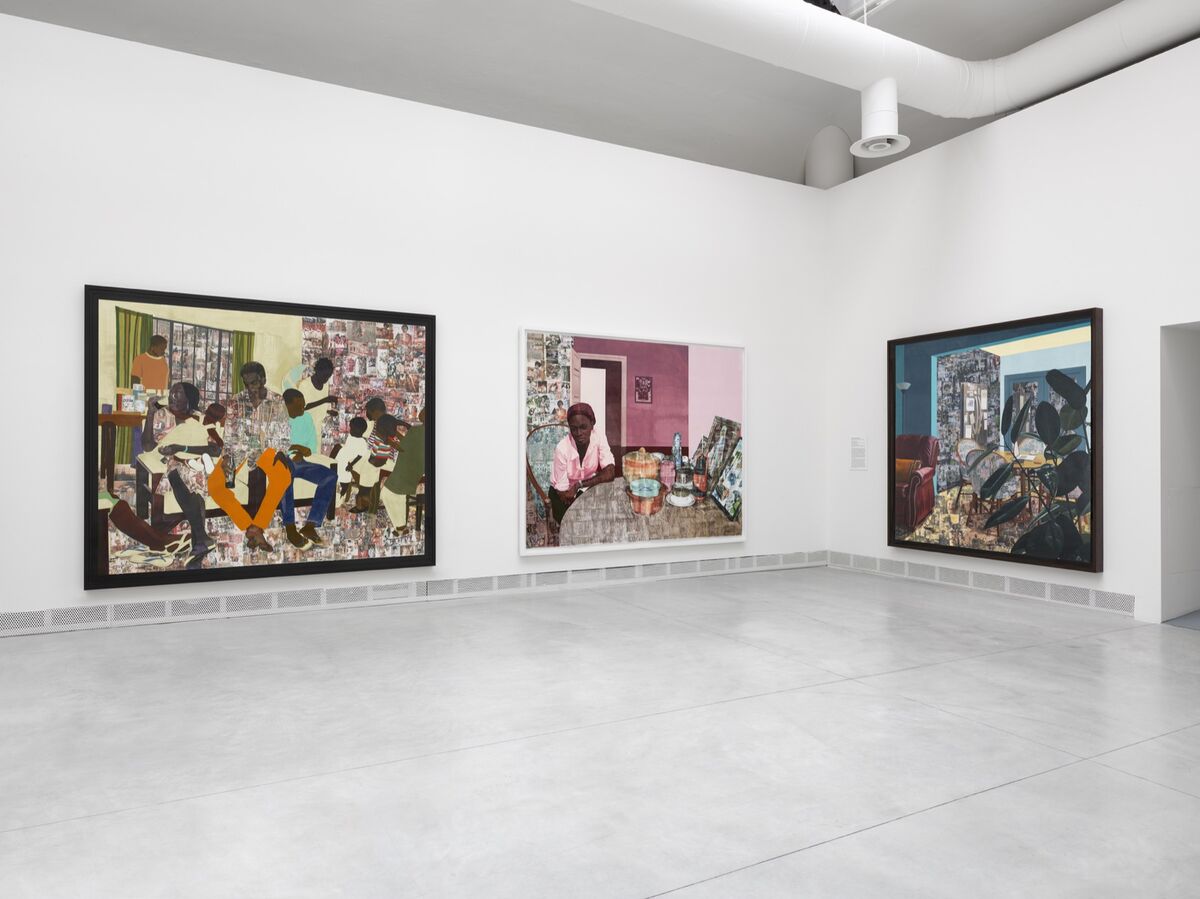 Njideka Akunyili Crosby’s magnetic, multifaceted paintings hold court across the Arsenale and Giardini in Ralph Rugoff’s “May You Live in Interesting Times,” as well as in a tight show at Victoria Miro’s canal-side Venice gallery. At the gallery and the Giardini, we see the vibrant collaged pieces for which the artist has earned both acclaim and seven-figure sums on the auction block. For these works, she used photo-transfer to invoke personal narrative and pop culture, literally collaging together her Nigerian heritage and her present life in Los Angeles. In the Arsenale, we see small yet powerful paintings in which Crosby focuses on the faces of the Nigerian diaspora. In 2020, she will have a show at the Yale Center for British Art in New Haven, Connecticut, curated by beloved cultural critic Hilton Als. 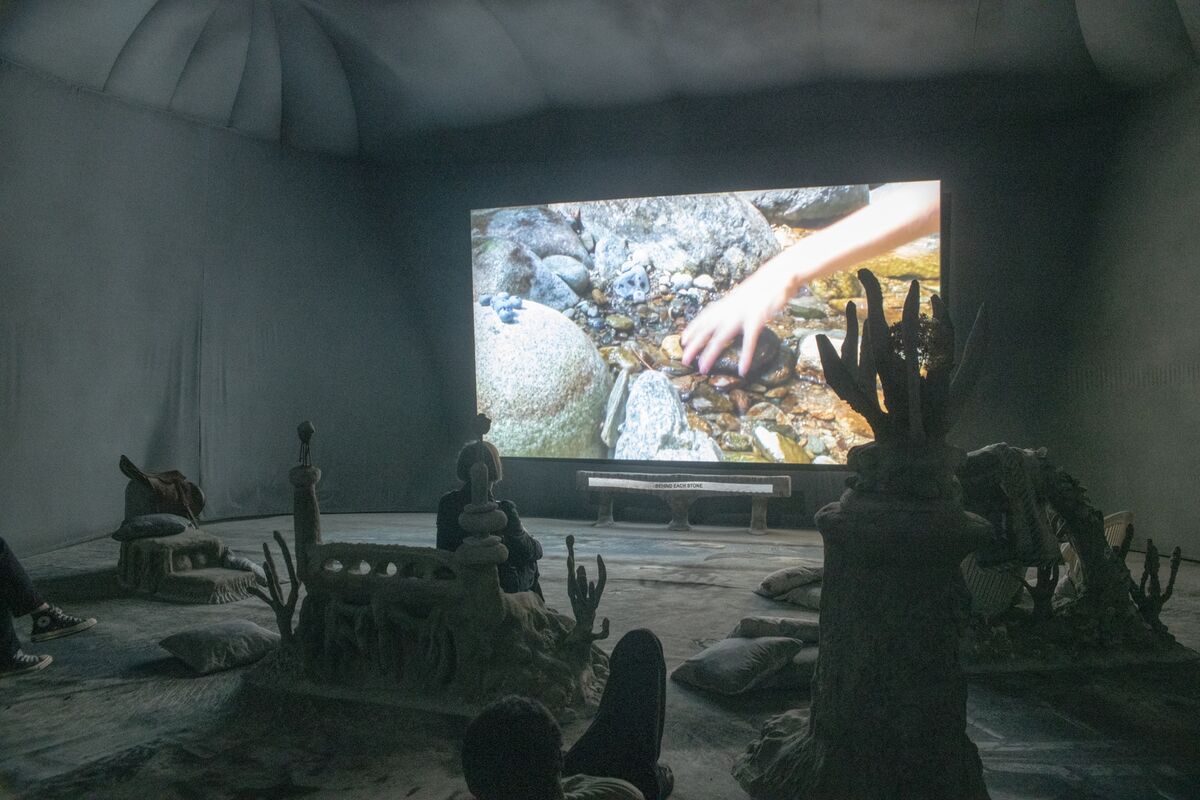 At the French pavilion, don’t miss Laure Prouvost’s presentation, cumulatively titled “Deep See Blue Surrounding You/Vois Ce Bleu Profond Te Fondre.” It includes the most transportive film you’ll find at the Biennale. Visitors enter the show after waiting in a long line that wraps around the wooded area next to the pavilion. They walk upstairs, past a giant dirt hole—Prouvost has said she’s tunneling to the British pavilion. Inside, they’ll find a floor coated in ocean blue, adorned with rubble. The theater lies just beyond a curtain, playing a video in which Prouvost breathily narrates a wacky, magical journey. Exit through the darkened galleries at the side, which bring additional elements of Prouvost’s fantasy to life. The artist has long been celebrated for her fountains made of glass breasts, her off-beat films, and her engulfing installations for which she creates elaborate narratives. On May 19th, she closed a solo show entitled “AM-BIG-YOU-US LEGSICON” at the Museum of Contemporary Art in Antwerp. 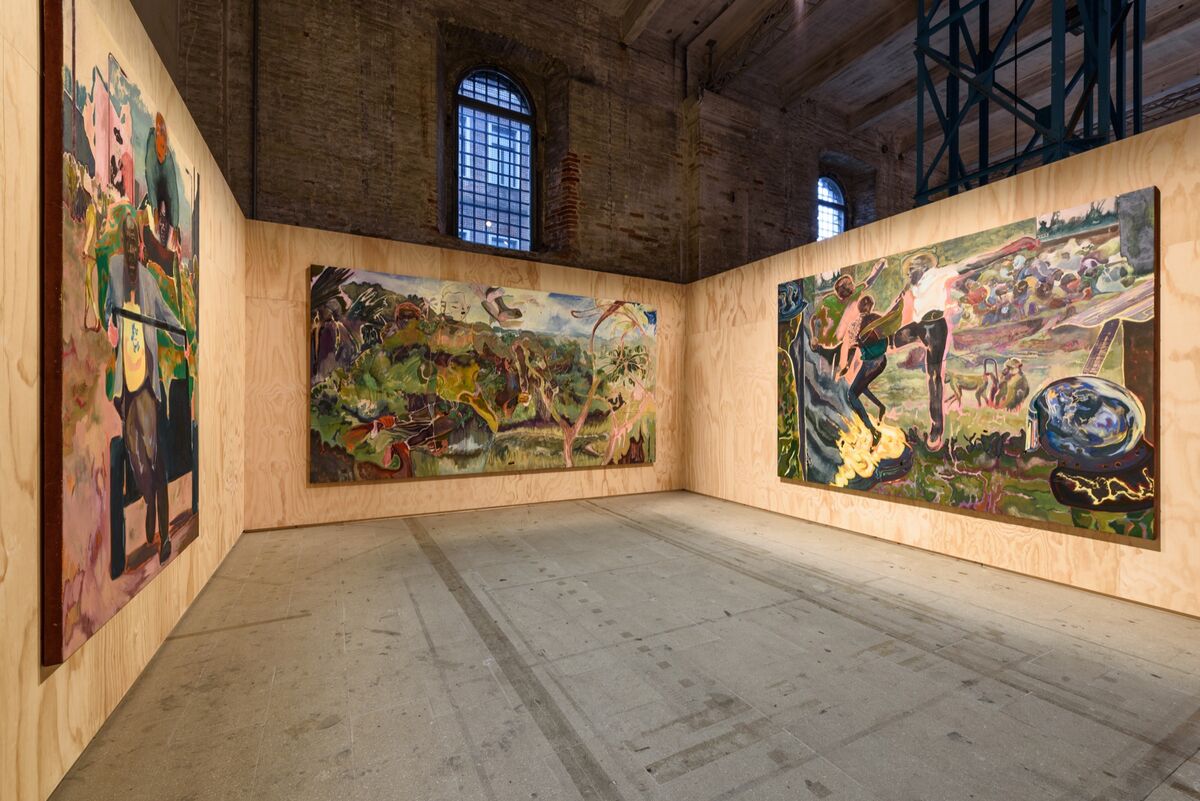 In the Arsenale portion of “May You Live in Interesting Times,” Kenyan-born, London- and Nairobi-based painter Michael Armitage’s showstopping, ethereal paintings challenge Western conceptions and colonial narratives surrounding the African continent. In the Giardini, a series of small, delicate ink drawings are just as moving. He created them after witnessing photographers in political rallies in Kenya in 2017, ahead of the country’s elections that year. The pen-and-ink studies capture individuals’ impassioned expressions; some figures are also the protagonists in his paintings. Armitage, who shows with White Cube in London, will continue to make waves this fall as his work goes on view in New York. In October, he’ll open a solo exhibition at the Museum of Modern Art through its partnership with the Studio Museum in Harlem, curated by Studio Museum director Thelma Golden. 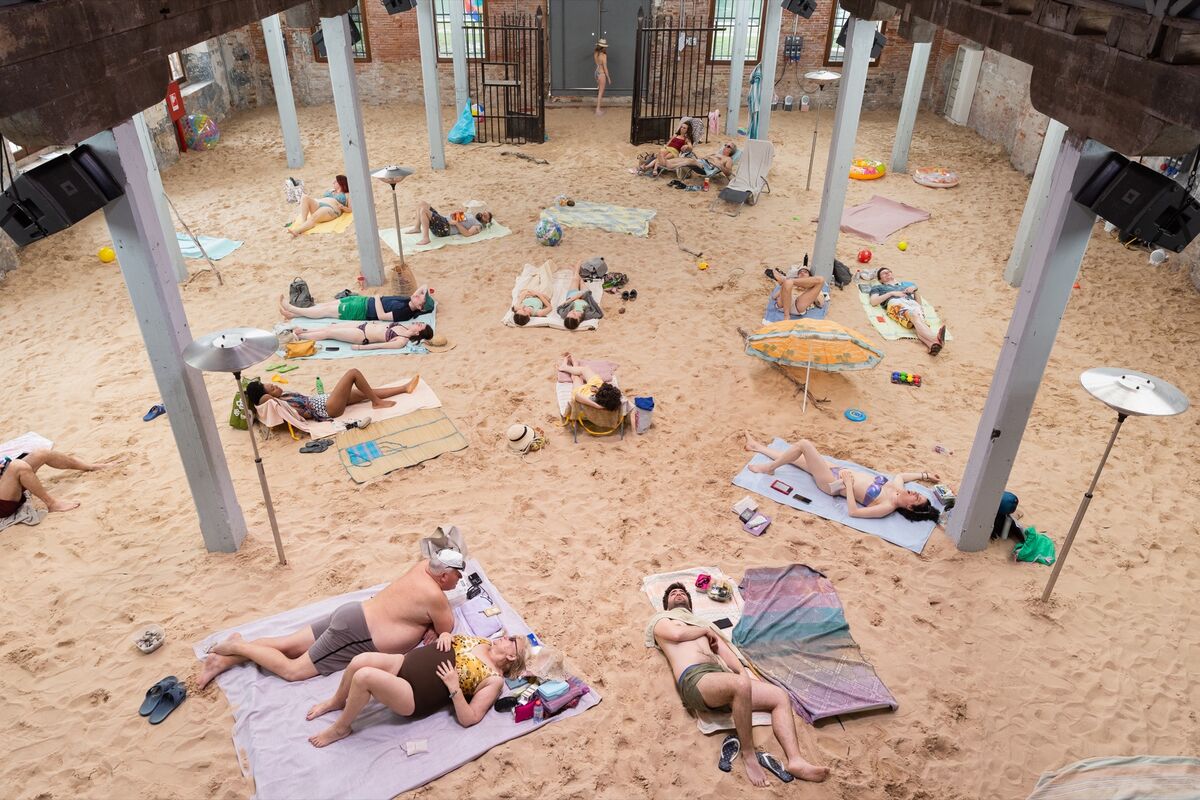 Lithuanian artists Rugilė Barzdžiukaitė, Vaiva Grainytė, and Lina Lapelytė took the Biennale—and Instagram—by storm with their indoor beach opera, Sun & Sea (Marina) (2019). Awarded the Golden Lion, the pavilion is a refreshing and magnetic meditation on climate change. Originally performed in Vilnius, Lithuania, in 2017, the Venice iteration required a new libretto in English, and offered a rare live performance amid the video-heavy Biennale.
The artists previously collaborated on Have a Good Day! (2013), a musical commentary on capitalism told by cashiers at a supermarket. Together, their expertise spans art, music, film, and theater. Based in Vilnius, Barzdžiukaitė is a filmmaker and theater director who has recently worked on documentaries and operas, exploring the boundary between fact and fiction. Grainytė, the librettist of Sun & Sea (Marina), is a writer, poet, and playwright who has also recently developed site-specific performances and radio plays, delving into social issues, collective memory, and daily routines. And Lapelytė, who is based between London and Vilnius, has a performance-art practice through which she draws upon her background in sculpture and the violin.
Alina Cohen
Casey Lesser is Artsy’s Lead Editor, Contemporary Art and Creativity.
Correction: A previous version of this article misstated that Martin Puryear’s Big Bling has travelled to MASS MoCA. The presentation of Big Bling at MASS MoCA is still forthcoming. The text has been updated to reflect this change.
Related Stories 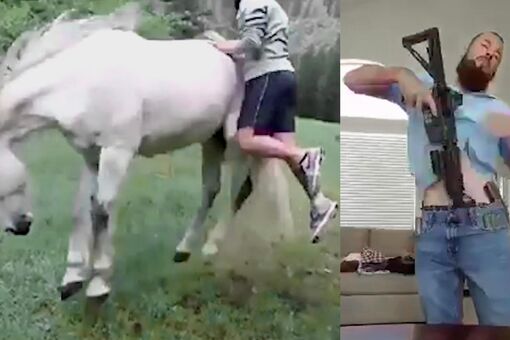 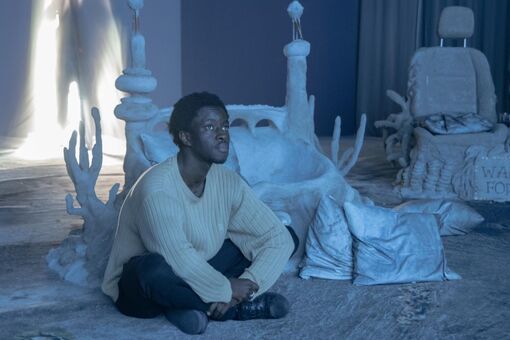 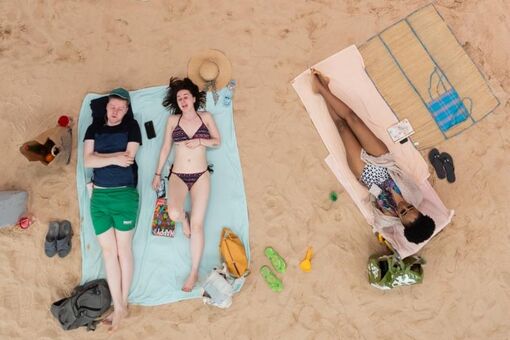 Inside the Indoor Beach Opera That’s the Talk of the Venice Biennale
Casey Lesser
May 14, 2019 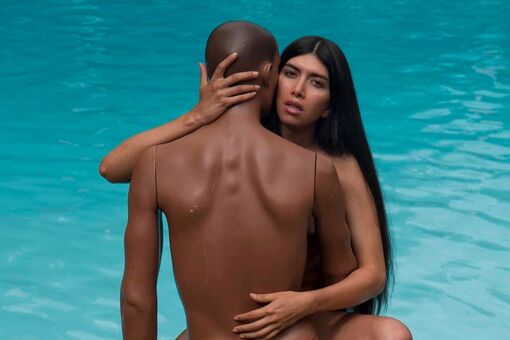 At the Venice Biennale, Artists Create Their Own Truths in the Era of “Fake News”
Alina Cohen
May 9, 2019