Alexxa Gotthardt
Apr 11, 2016 8:08pm
This Thursday, the Dallas Art Fair will open its largest edition yet, hosting 97 galleries from 17 countries across its sprawling space, situated next to Dallas Museum of Art in the city’s downtown Arts District. New work by up-and-coming artists like Ragna Bley, Margo Wolowiec, and Calvin Marcus is the fair’s strongest suit, while exceptional works by older, lesser-known artists like Barbara Kasten, Garth Evans, and Simone Fattal also stand out. 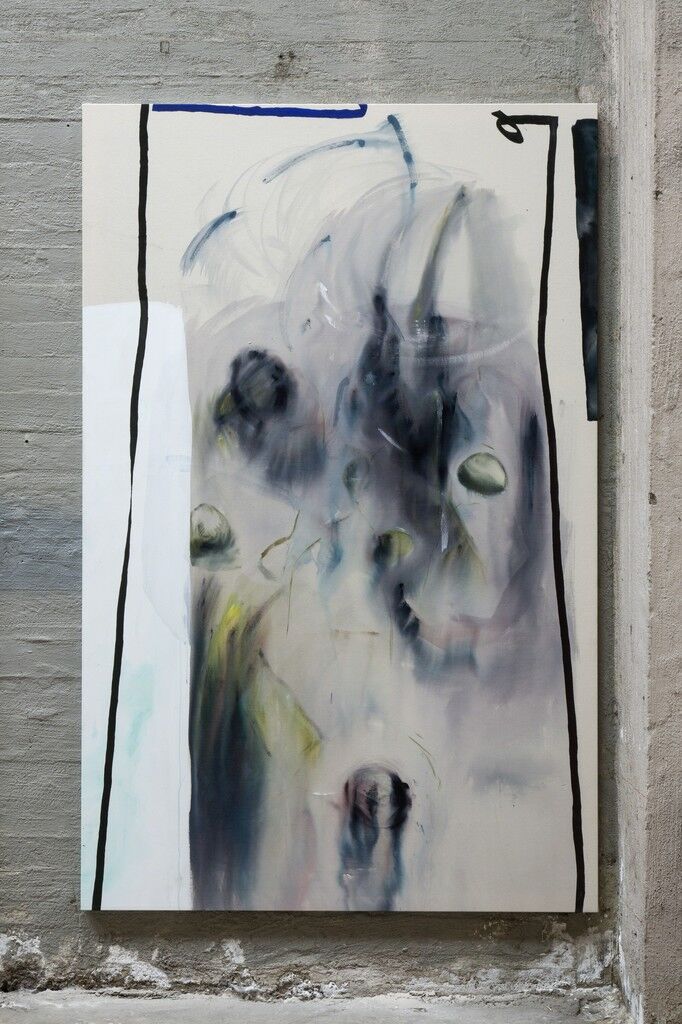 One-size veil, 2015
Hester
After graduating from Royal College of Art’s MFA program last year,
Bley
was picked up by the Lower East Side’s HESTER gallery, who will be showing her mesmerizing large-scale paintings at the fair. The fair marks the Oslo and London-based artist’s first U.S. outing, and will serve as a preview to her forthcoming solo show at the gallery, opening later this month. The shapes that populate Bley’s canvases are defined by soft, gauzy edges and cloudy centers that at times resemble figures, landscapes, or the mysterious, churning substances that fill crystal balls. In this piece, an area of grey, blue, and black paint is punctuated by three circles that, at a glance, could be nipples and a phallus. It’s this kind of ambiguity that powers the young artist’s work, which is also slated for a solo exhibition at the Kunsthall Oslo in 2017. 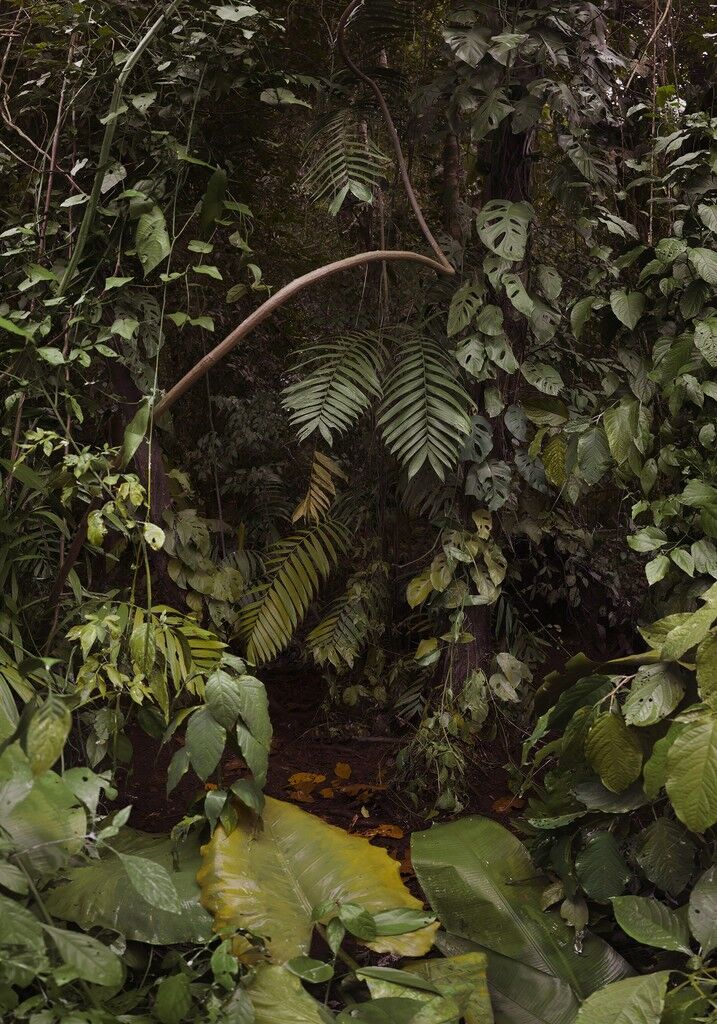 Landscape Painting (Jungle), 2015
Marlborough Chelsea
Advertisement
Von Bismarck
’s mischievous, multifaceted body of work, which largely comments on humanity’s controversial desire to control nature, has seen him strike the ocean with a bullwhip and cover large areas of the desert and jungle with paint. The latter project, also a cheeky sendup to the tradition of landscape painting, was documented in videos and photographs. At close glance, the lush flora depicted in this image is in fact covered with a layer of green acrylic paint. 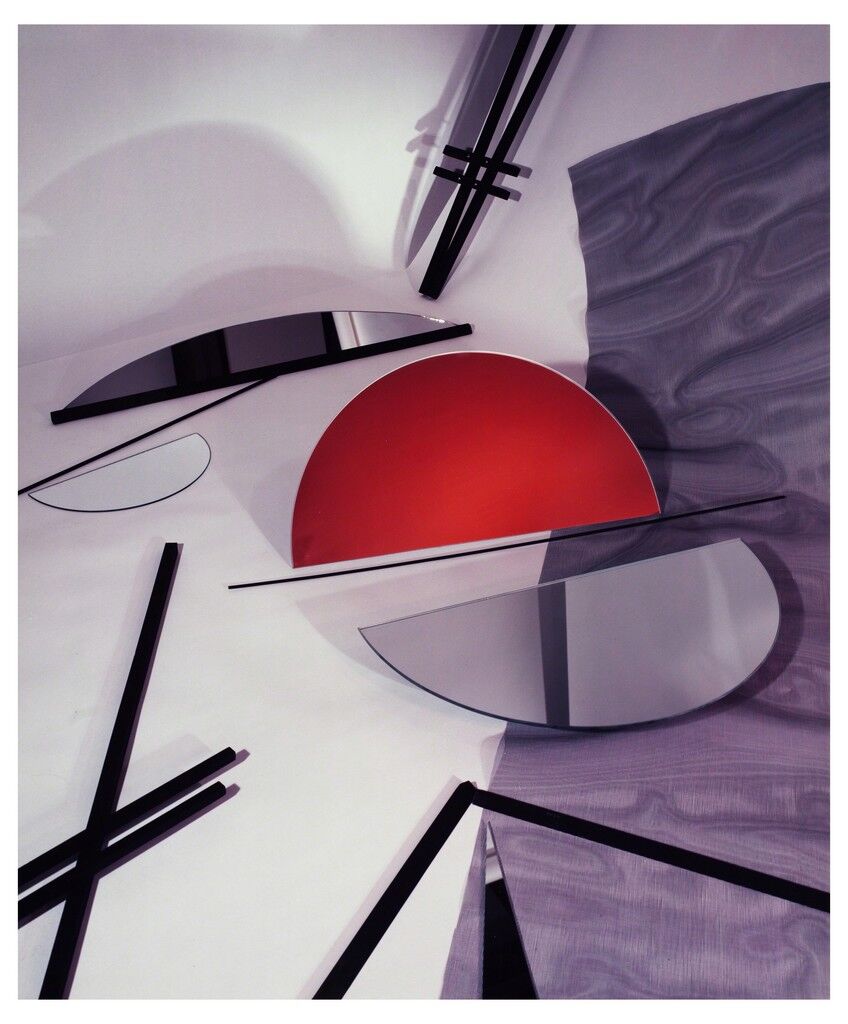 Construct PC / 5-A, 1981
Bortolami
Kasten
’s experimental photographs and paintings, which she began making in the 1970s, have only recently received the due they deserve; last year, ICA Philadelphia organized the Chicago-based artist’s first major retrospective. Shards of light intersect with geometric pieces of plexi and glass in her best-known photographs, which dynamically draw from
Constructivism
,
Light and Space
, and early photographic techniques like the photogram. This work comes from her influential “Construct” series, in which she created surrealist tableaux to explore the relationship between light, object, and space. 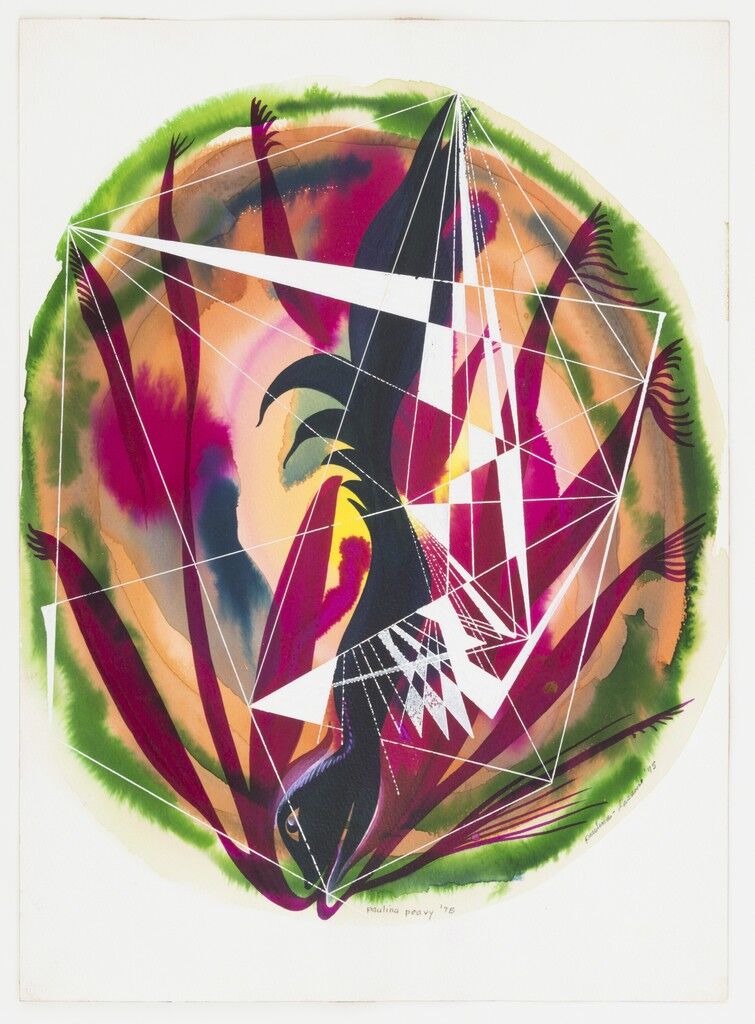 Untitled , 1975
Andrew Edlin Gallery
Andrew Edlin Gallery is using the fair as an opportunity to introduce its involvement with
Peavey
’s work. The gallery will show several of the little-known visionary artist’s whimsical abstract paintings, which were inspired by her ethereal spirit mentor, Lacamo, who she communicated with through a medium. The knowledge that Lacamo imparted to Peavy centered around the “appropriation of female creativity by men and male-centered mythmaking,” as her estate explains, and it was this idea that powered her practice. Like much of her work, this small, intricate painting fuses mythical and spiritual iconography with an interest in female anatomy. 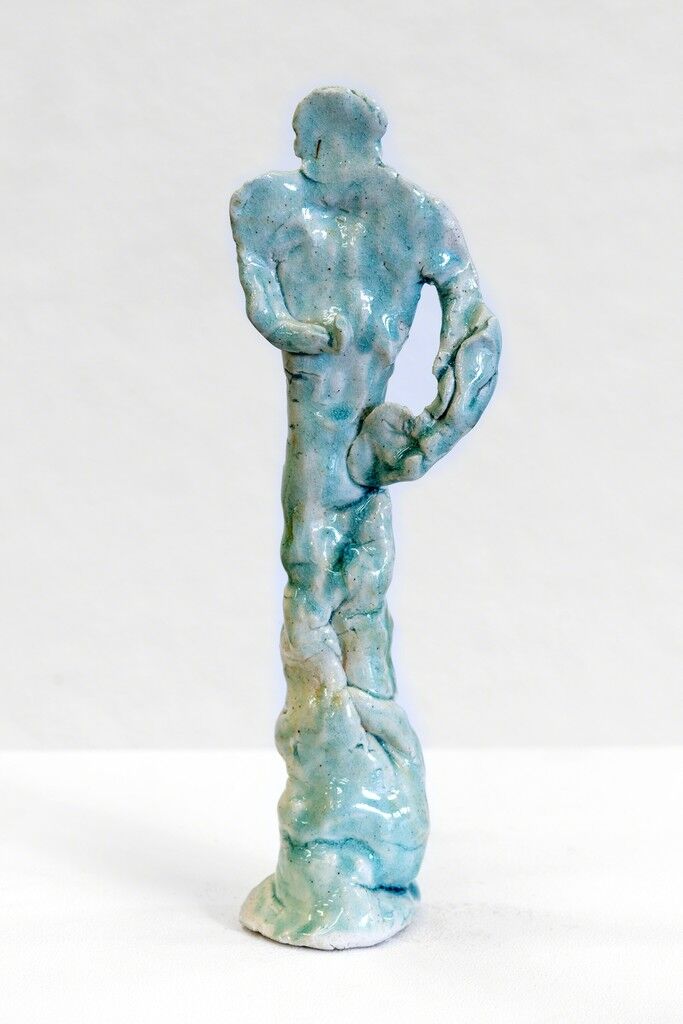 Man and His Shadow, 2010
Karma International
Fattal
is now in her seventies, and her politically and psychologically charged sculptures and collages are currently experiencing a renaissance. Since her inclusion in the New Museum’s “Here and Elsewhere” in 2014, the Damascus-born, Paris-based artist’s work has been featured in solo shows at Balice Hertling and Karma International, galleries that largely show emerging and mid-career artists, and now the Sharjah Art Foundation presents her first major retrospective. This small, intimate object is typical of Fattal’s figures. Faceless and roughly modeled, it becomes a timeless representation of “man”—one that encompasses a range of male tropes, from caveman to contemporary warrior. 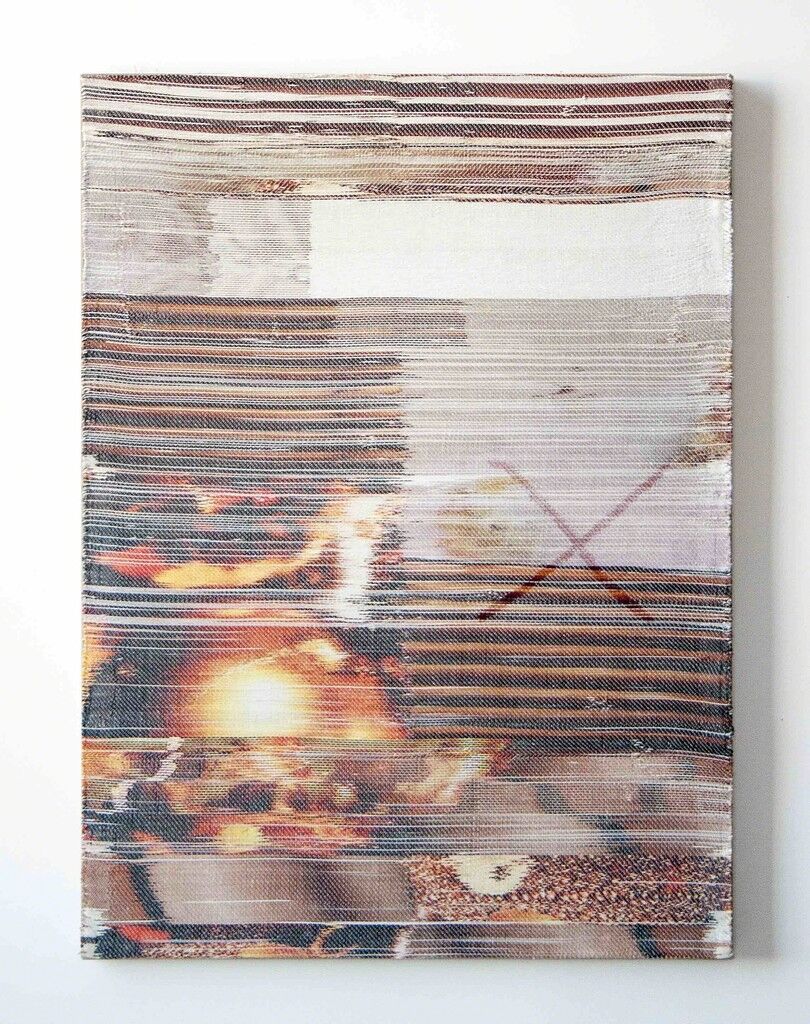 Late , 2016
Jessica Silverman Gallery
After recently announcing representation of
Wolowiec
, Jessica Silverman Gallery cements the relationship by bringing the New York-based artist’s work to Dallas. This new piece compresses the artist’s signature approach into one small but hypnotizing tapestry. She creates its static-y striations by abstracting imagery mined from internet and social media searches with digital tools and, finally, the process of weaving. Powerfully, her works question the veracity of information that lives on the internet—and our reliance on it. 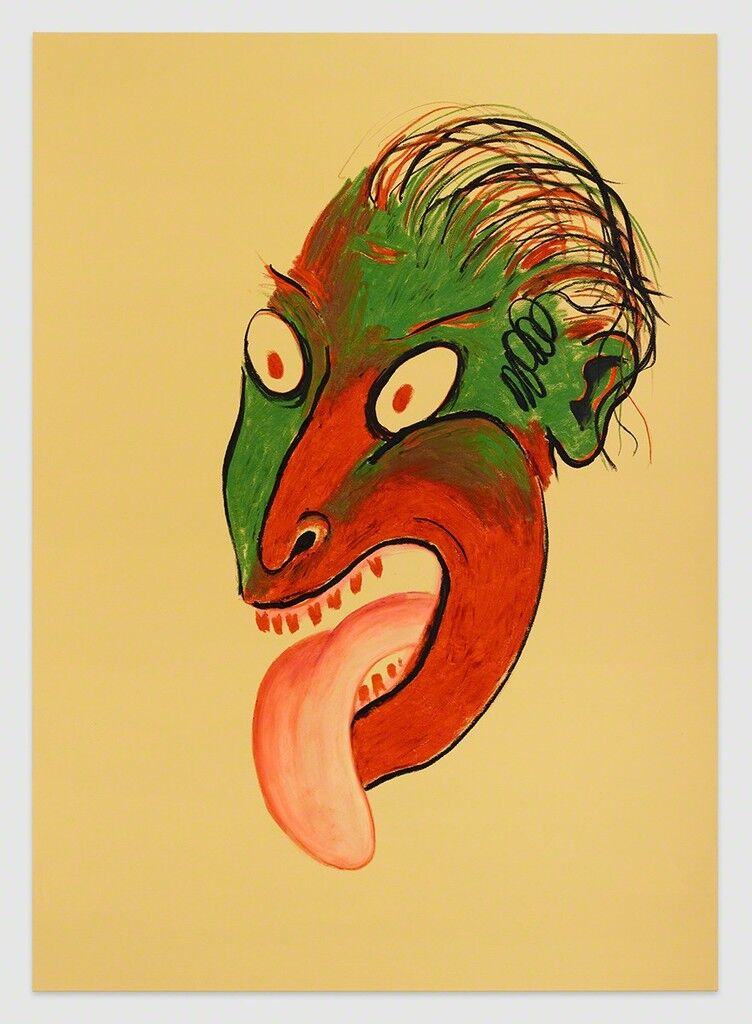 me with tongue, 2016
David Kordansky Gallery
David Kordansky builds on the momentum of his first solo show with
Marcus
, which closed at the end of March, with a solo booth of the twentysomething Los Angeles-based artist’s work. Marcus uses self-portraiture across his body of work—of a non-traditional, fantastical, shape-shifting variety—to explore how an artist’s persona is constructed. This work presents one of Marcus’s alter-egos: a devilish, tongue-wielding figure that repeats on several canvases across the booth with slight variations. The series seems to embody specific, albeit universal, character traits like jealousy and anger. 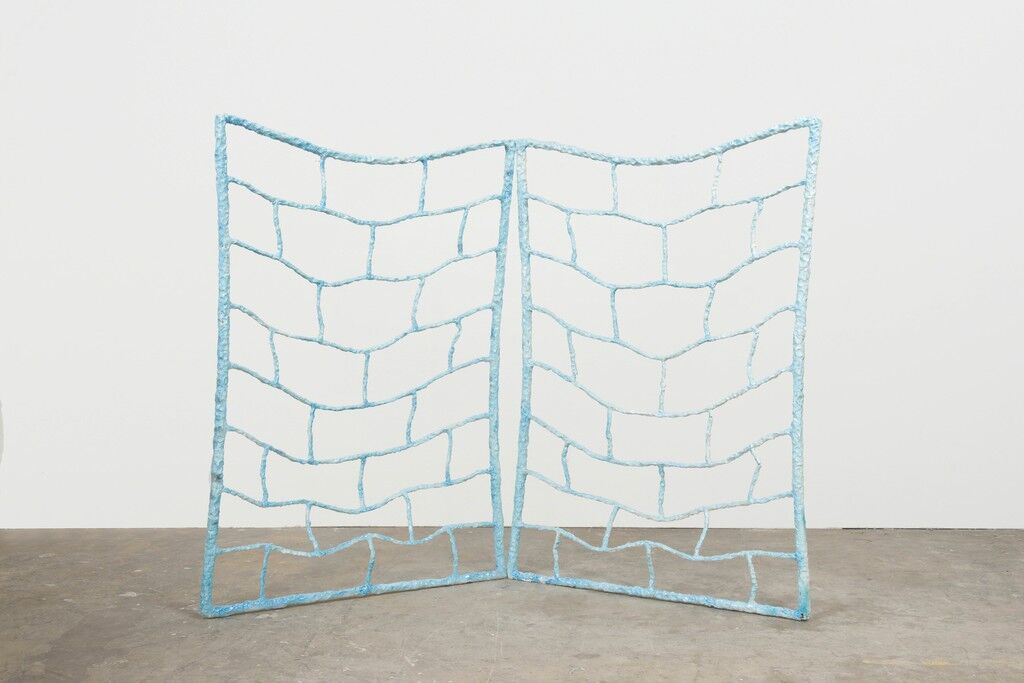 Block Wall, 2012-2015
François Ghebaly Gallery
In anticipation of
Ryan
’s forthcoming solo shows with François Ghebaly in L.A. and Josh Lilley in London later this year, Ghebaly brings a large-scale, teetering sculpture by the up-and-coming Los Angeles-based artist to the fair. This work, like all of Ryan’s sculptures, excels at rethinking the scale, weight, and texture of everyday objects. Here, a “block wall” is but a fragile outline of its source material, rendered in thin tines of fragile ceramics. Other works enlarge bunches of grapes or eyeglasses twenty-fold, and render them in unexpected materials like concrete and copper pipe, respectively. 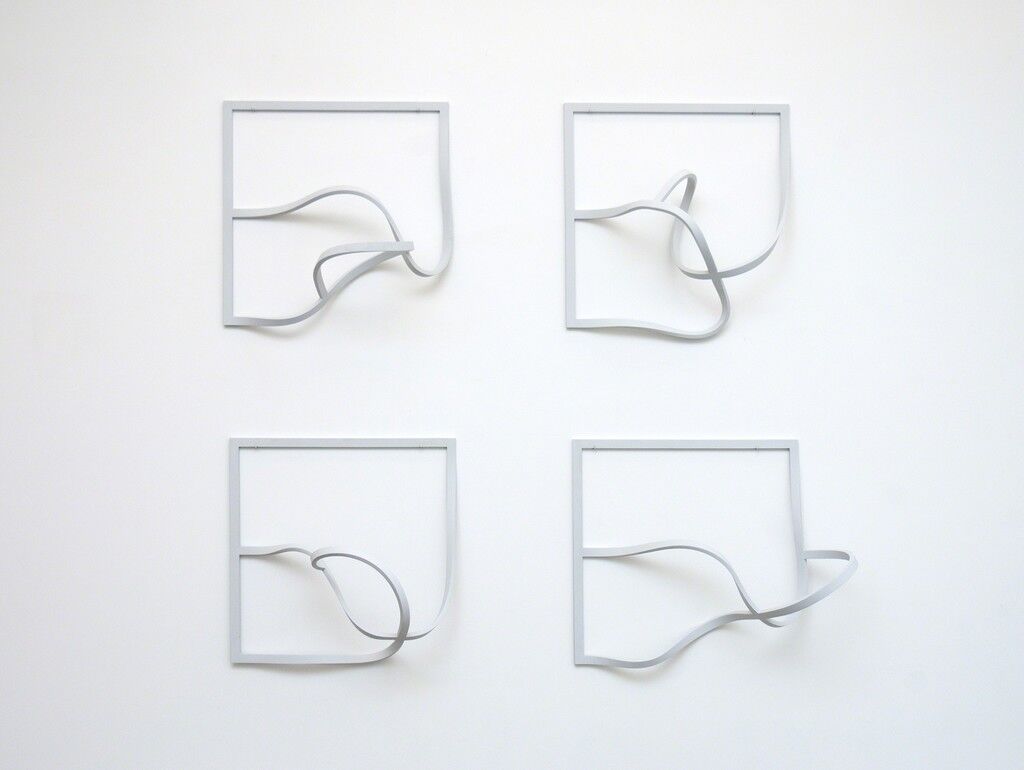 Frames (Echoes) 4, 1971-1974
Johannes Vogt Gallery
Fortunately, Johannes Vogt unearthed several of
Evans
’s early sculptures for the fair. These small-scale plywood objects serve as touchstones for the artist’s robust practice, which has seen the eightysomething artist bend wood, clay, and resin into abstract forms that question our expectations of traditional materials. These deconstructed frames reveal the deftness and delicacy with which Evans handles his medium—here, he transforms plywood into elegant, writhing, almost weightless sculptures. 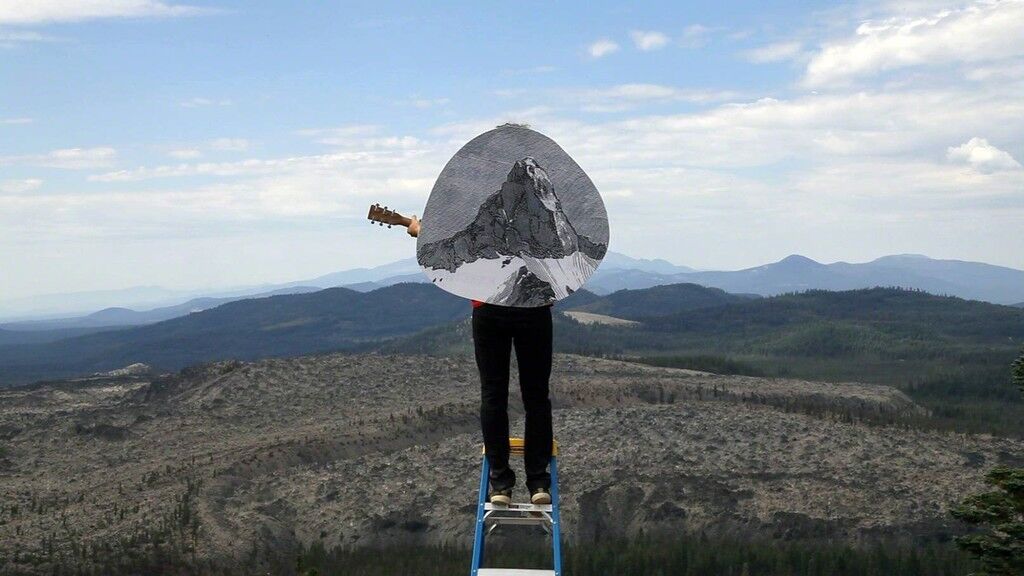 an is that isn't always, 2015
Carroll / Fletcher
Walker
’s dreamy, playful photos and videos explore his own obsession with landscape—and likewise mankind’s complicated relationship with it. Setting himself in the center of wide-open, remote environments, the young British artist highlights the awe-inspiring qualities—and emotional effects—of nature. This recent film shows Walker reciting a poem of his own conception against a mountainous vista; in a deadpan tone, he muses “all I can do is sit back and witness the unfolding of something,” relating existential feelings of insignificance to his surroundings.
Alexxa Gotthardt