The 10 Best Booths at The Armory Show On Wednesday morning, just after Super Tuesday results were called, the 26th edition of The Armory Show opened at Piers 90 and 94 on Manhattan’s West Side. Panic about coronavirus became the go-to small talk topic of choice, and Purell was poured as fast as the champagne. Sales appeared to carry on as usual, as 178 galleries from 31 countries began hawking their wares.
Shortly after the preview began, a few bold souls wandered the halls, shouting to ask if there was a doctor in the house—someone required medical assistance at the back of the fair. Attendees weren’t visibly disturbed. In fact, the prospect of hugging or hand-shaking, in the face of what might be a global pandemic, appeared much more unnerving to the well-heeled crowd. In an industry used to making deals with handshakes, how will this newfound shyness affect business? It’s too soon to tell. For now, enjoy the best presentations the fair has to offer.

With works by Cynthia Daignault and David Korty 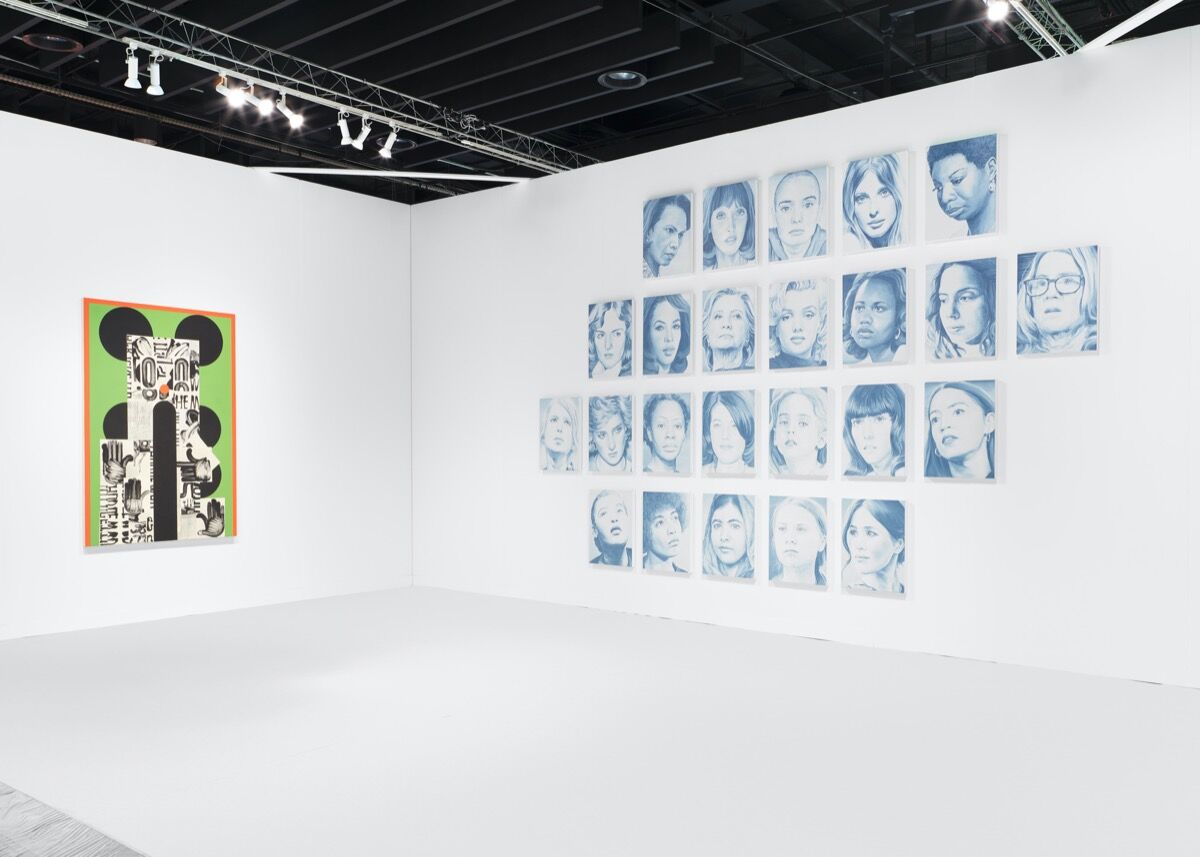 With 24 portraits in tones of white and payne’s gray—a melancholy gray tinged with blue—
Cynthia Daignault
commemorates women who have been in the public eye. Her subjects range from Patty Hearst to Anita Hill, from JonBenét Ramsey to Alexandria Ocasio-Cortez. They’re presented sans hierarchy, though curator Jamillah James (who organized the Focus section) made some canny choices: Hillary Clinton’s picture sits atop Monica Lewinsky’s; Princess Diana’s likeness looks slantwise towards Meghan Markle’s. “Everyone here has faced some sort of scrutiny or public downfall,” explained Night Gallery’s senior director, Brian Faucette. “They’re all connected by that larger narrative.”

Night Gallery
View Slideshow
5 Images
Advertisement
Altogether, Daignault calls the series “Delia’s Gone” (2020), after a Johnny Cash song. A real murder back in 1900 inspired that number and its folk ballad antecedents. Cash’s tune, told from the perspective of the killer, describes how the narrator ties his lover Delia to a chair and shoots her. Even before the age of mass media, men transformed tales of violated women into crowd-pleasing songs. Cash sings: “First time I shot her / I shot her in the side / Hard to watch her suffer / But with the second shot she died.”

With works by Tezi Gabunia 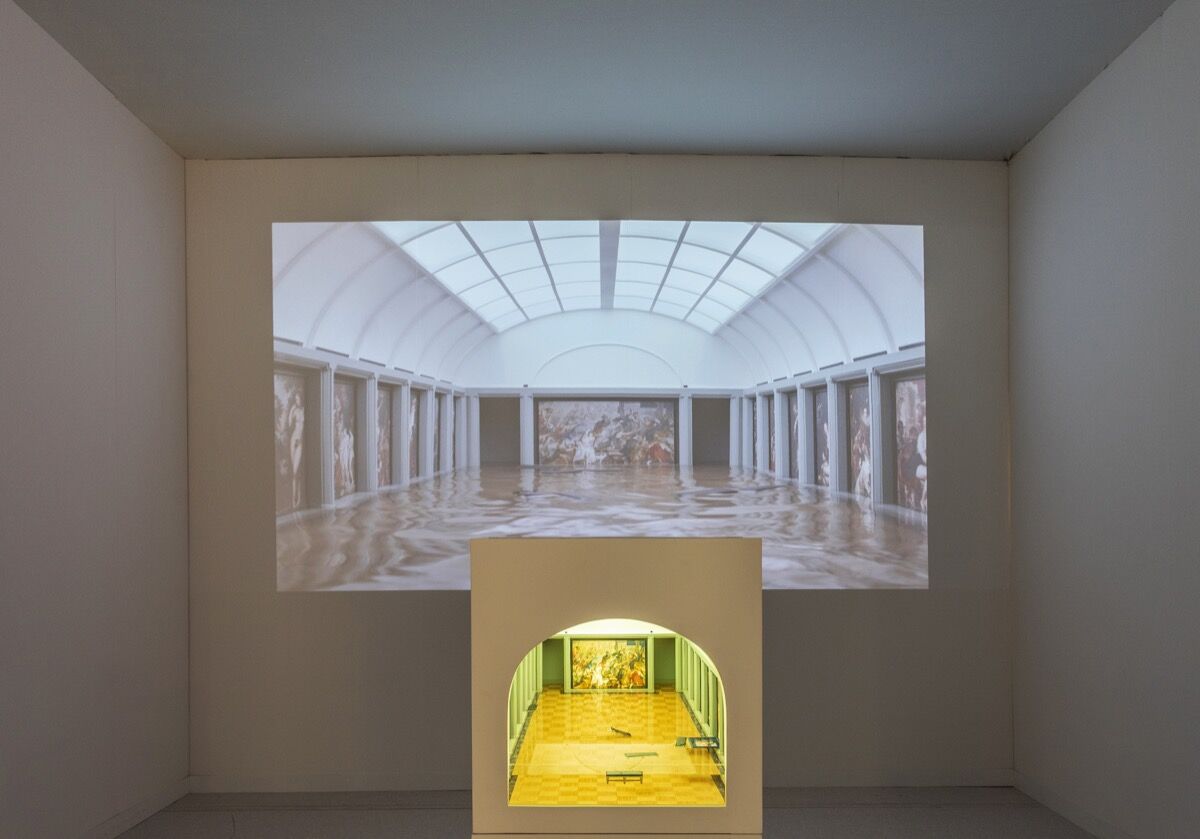 At Galerie Kornfeld’s booth, watch a cultural nightmare unfold. In his film Breaking News: The Flooding of the Louvre (2018–20),
Tezi Gabunia
captures a (fake) flood in the Louvre’s Médicis gallery, which holds priceless canvases by
Peter Paul Rubens
. Gabunia, a young Georgian master architect, shot his footage in an amazingly lifelike model of the gallery. Kornfeld describes the mock-up as a “kind of aquarium.” The faux Flemish
Baroque
paintings become the helpless fish.

Galerie Kornfeld
View Slideshow
1 Image
Both video and model are on view together—and sold together, in an edition of three, for $29,000—which exposes the fiction of Gabunia’s narrative. Yet when the Seine did flood back in 2018, and affected the Louvre, the artist was concerned with how little attention the issue received. Gabunia hopes his piece will lead viewers to think about the possible effects of climate change. If humans don’t become more environmentally savvy, natural disasters threaten culture in more ways than we know.

With works by Wendy White 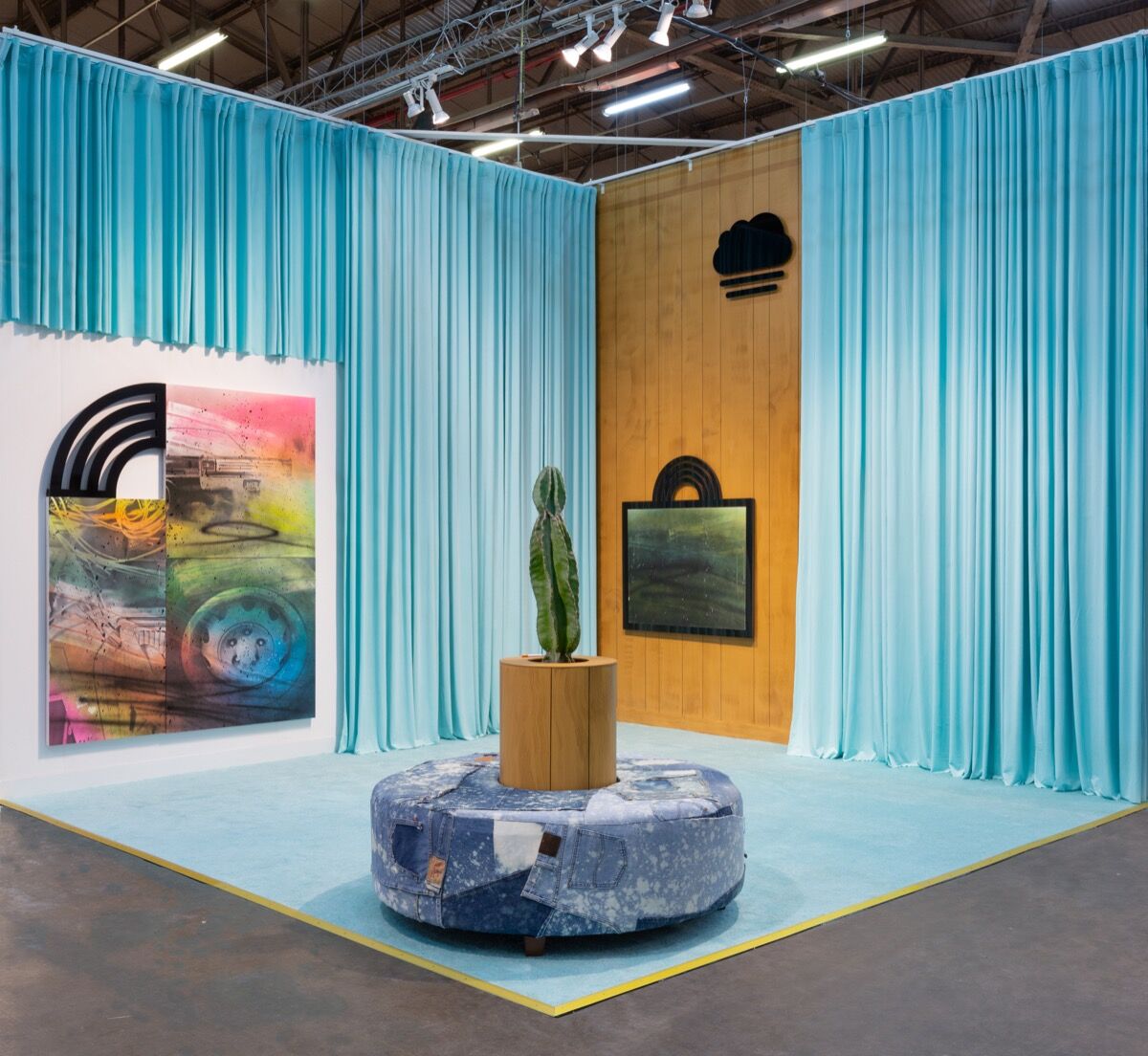 Clad in a lemon-and-tangerine tracksuit, artist
Wendy White
stood out against the aqua curtains that conceal her paintings at Shulamit Nazarian’s booth. The drapes create a sense of flirtation and intrigue—if you want to see the works, you have to ask a gallerist to reveal them. At an art fair, White explained to me, it’s common for new art to come out on the second or third day, or to be hidden in a back room; a piece might unexpectedly come out of storage. The artist likes that sense of surprise. “I wondered what would happen if you used the real estate of a booth to do that in real time, so that you could reveal a whole new body of work just by shifting the curtains,” she said. 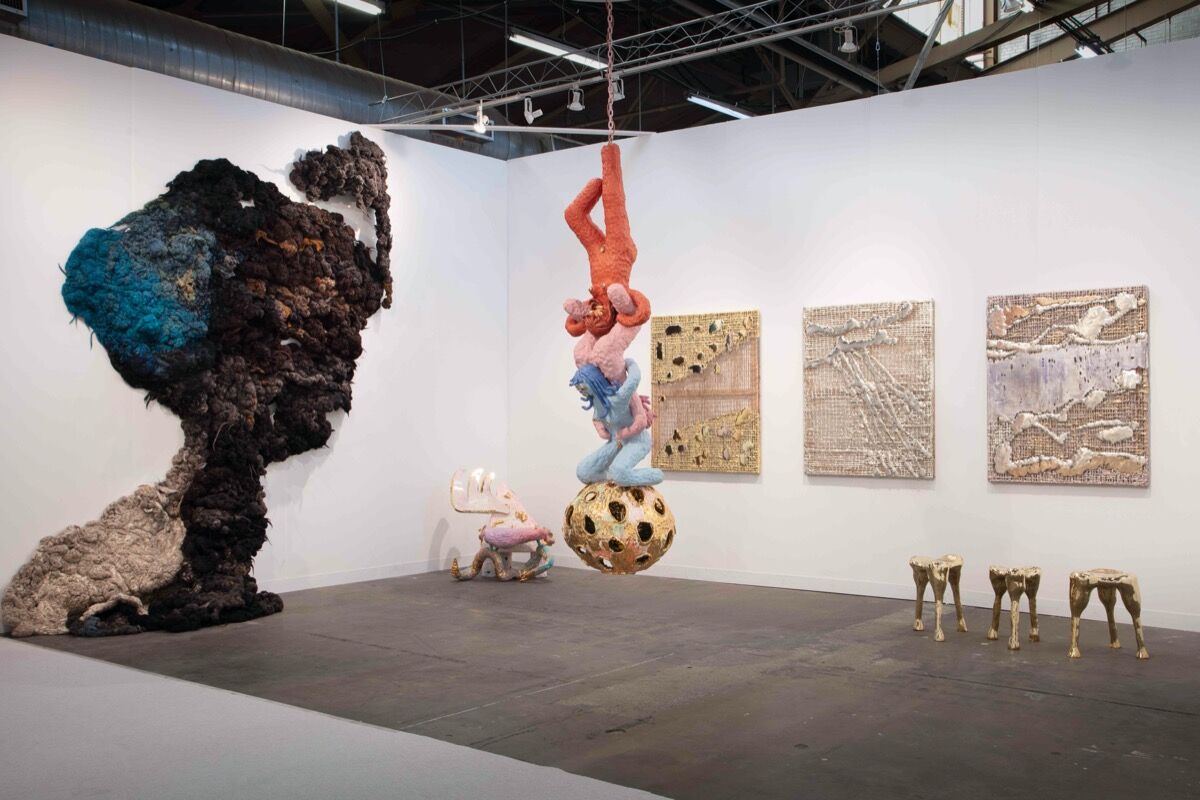 Art fairs are notoriously snobbish about accepting functional work. To sneak in a seat or a lighting device, the objects must double as “fine art”—whatever that is.
Katie Stout
never has any trouble with such restrictions; she’s best known for colorful lamps that resemble ceramic girls playfully holding up lights. R. & Company presents a wildly ambitious chandelier by the young artist (priced at $65,000), which features blue, pink, and burnt-orange ceramic bodies, dangling from a thin pink chain as they hold each other up like skilled acrobats. The blue lady kneels atop a pocked golden ball with a lightbulb glowing inside. Nearby, a chair by Stout (going for $35,000) that’s being shown for the first time looks more like a sculpture of a cotton-candy-pink tongue than anything you could possibly sit on. 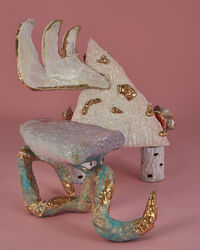 R & Company
View Slideshow
5 Images
The gallery also commissioned metallic “paintings” by
Nancy Lorenz
and a monumental wall hanging by
Dana Barnes
, among other pieces that fit quite well with whatever you might call “painting,” “sculpture,” or “fiber art.” “It’s just a matter of curating the right pieces for the right event,” said gallery co-founder Evan Snyderman. 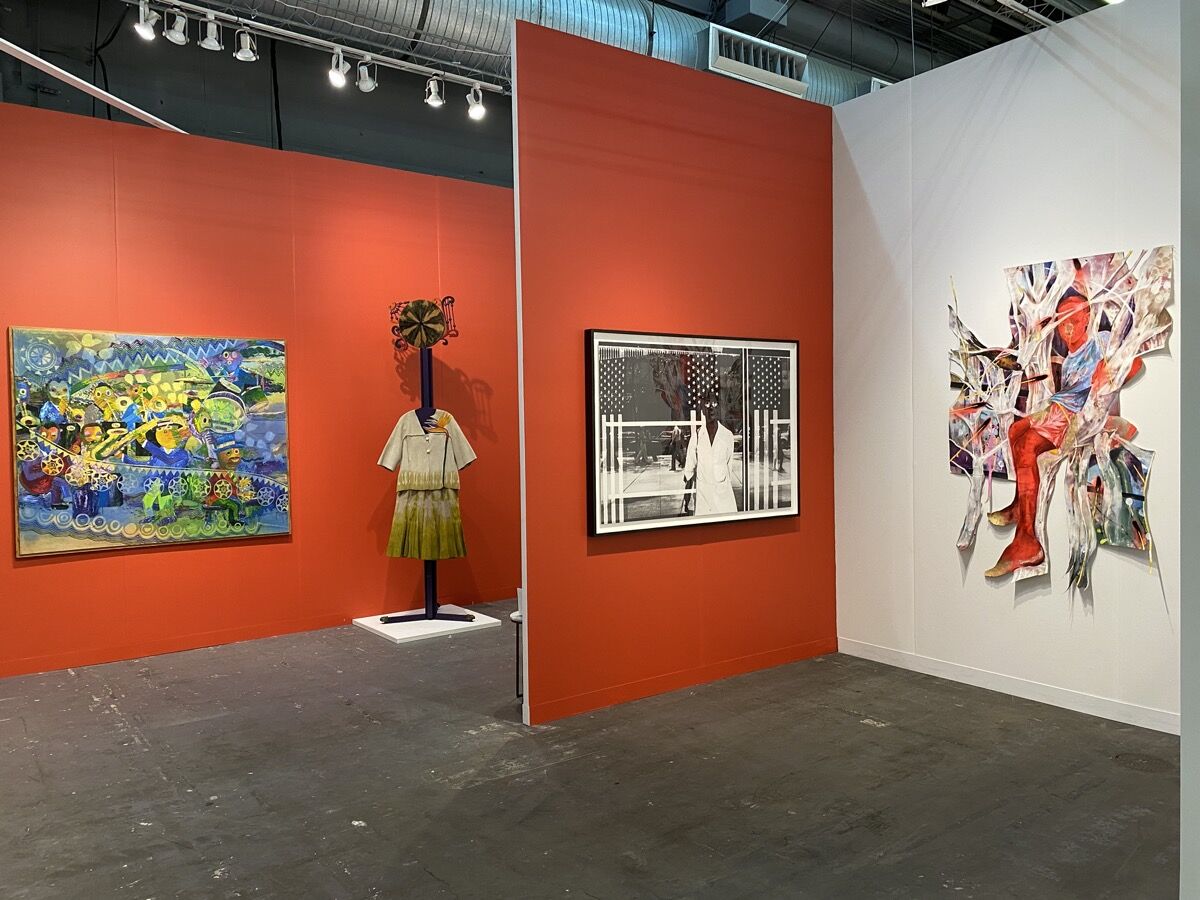 An image of trade, chance, and competition looms large at the outset of Jenkins Johnson’s booth.
Enrico Riley
’s painting Untitled: Card Players, Riches of the Past, Present, and Future (2020, $40,000) features hands around a green felted card table: Some rest, some hold their cards, and some touch their coins. The viewer is watching a game, unsure of the players. “I love how [Riley’s] playing with his palette here,” said Niama Safia Sandy, director of curatorial affairs at the gallery. “This richness in the skin tones is really coming through with his color choices.” Lime green tints the end of some fingernails, while the thumbnail closest to the viewer is bathed in purple. 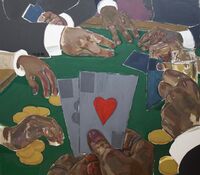 Jenkins Johnson Gallery
View Slideshow
5 Images
The rest of the booth features artwork made over the last 50 years by artists including photographer
Ming Smith
, young painting phenom
Chase Hall
, and AfriCOBRA co-founders
Wadsworth
and
Jae Jarrell
. Mrs. Jarrell’s sculptural suede skirt and top, from 1993, feature chartreuse tie-dye around the edges and hang from a pole with a head made from found objects. The female form, Bird of Paradise (1993, $175,000), becomes a totem overlooking the rest of the art. 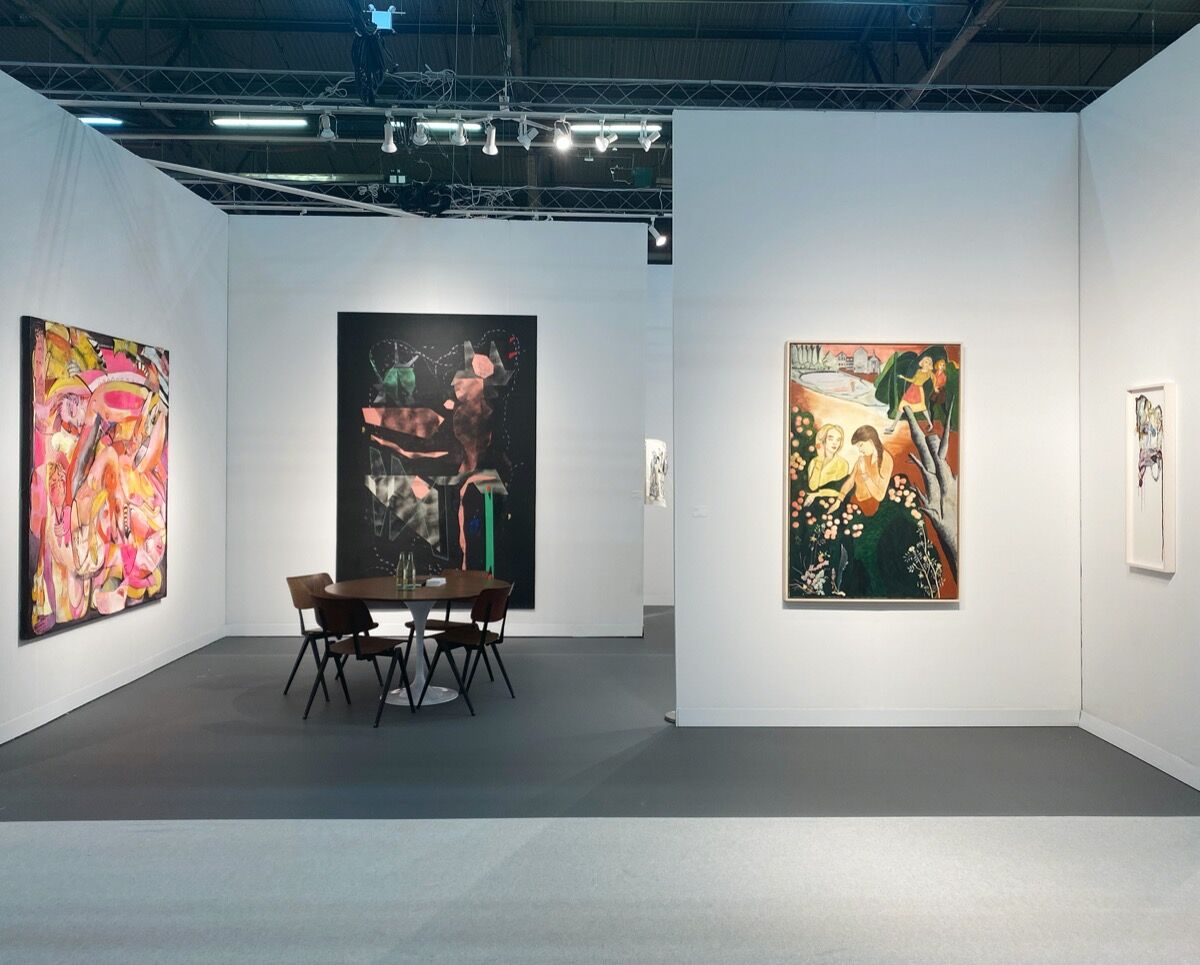 Kohn Gallery didn’t aspire to plan a booth celebrating female and non-binary artists; the directors just selected work they were passionate about and ended up with a thoughtful, attractive presentation featuring no male artists at all. Two untitled sculptures (both 2019, both sold for $12,500 each) by artist
Chiffon Thomas
are busts made from white plaster embedded with various materials. The plaster is sculpted to evoke Greco-Roman columns, with the heads appearing as though they’re buried in or emerging from the material, depending on how you look. Thomas is “looking at construction of identity and all the different components that create that,” said Kohn director Joshua Friedman. The intricate mélange of foam, chalk pastel, embroidery, leather, paint chips, resin, floss, and other substances represents the myriad components that comprise a single self.

Kohn Gallery
View Slideshow
5 Images
The booth also features an embroidery piece by
Sophia Narrett
, titled I Can’t Stop Crying Except Sometimes When I Think About Ari Gold (2016, sold for $12,000). With her signature sense of romance and fantasy, coupled with an interest in celebrity culture, Narrett weaves a chain and a television screen into her threaded narrative. (The Entourage character Ari Gold was based on power agent Ari Emanuel, whose company, Endeavor, bought 70% ownership of Frieze Art Fair in 2016.) Early in the preview, an abstract canvas by
Caroline Kent
, Parade of Unlocatable Objects (2018), had already sold to a major institution in Texas for $25,000. Don’t miss
Kate Barbee
’s and
Rosa Loy
’s luscious canvases either; all three of Barbee’s paintings sold for $12,500 to $17,000 each, while two paintings and two works on paper by Loy sold for $3,000 to $32,000 each. The artists have very different approaches to painting women, and their juxtaposed canvases suggest the multiplicity of the subject itself. 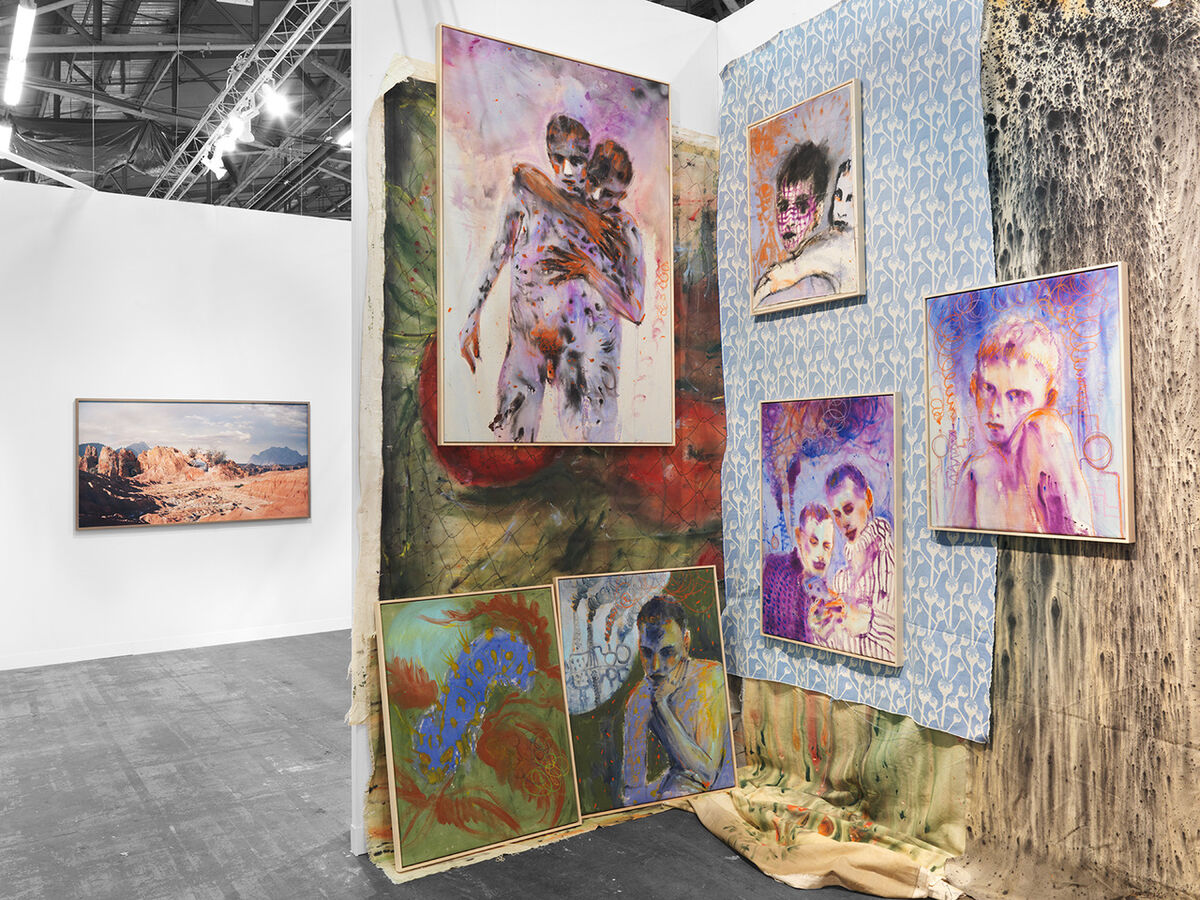 Painter
Andrej Dúbravský
pairs expressive portraits of gay boys and men with backdrops depicting
Brutalist
factories. Such structures dot the landscape in his home city of Bratislava and become symbols of climate crisis and apocalypse on his canvases. Gallery director Owen Reynolds Clements sees a “sentimentality or softness, vulnerability or intellectualism” in the subjects, which contrast with the stark architectures behind them. The figures’ faces are alternately purple or blue, overlaid with a grid or a single blue teardrop. Dúbravský plays up the paintings’ theatricality by hanging them against unstretched, patterned and painted canvas. 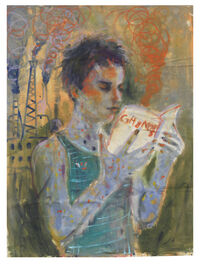 Dittrich & Schlechtriem
View Slideshow
6 Images
A selection of
Julian Charrière
’s photography offers a very different take on the environment. To complete “Where Waters Meet” (2019), the artist captured free divers disappearing into Mexican cenotes. In his frames, their nude bodies appear to be floating in an endless blue abyss. “It’s a work about an introspection or the oceanic feeling within the human psyche,” said Charrière. 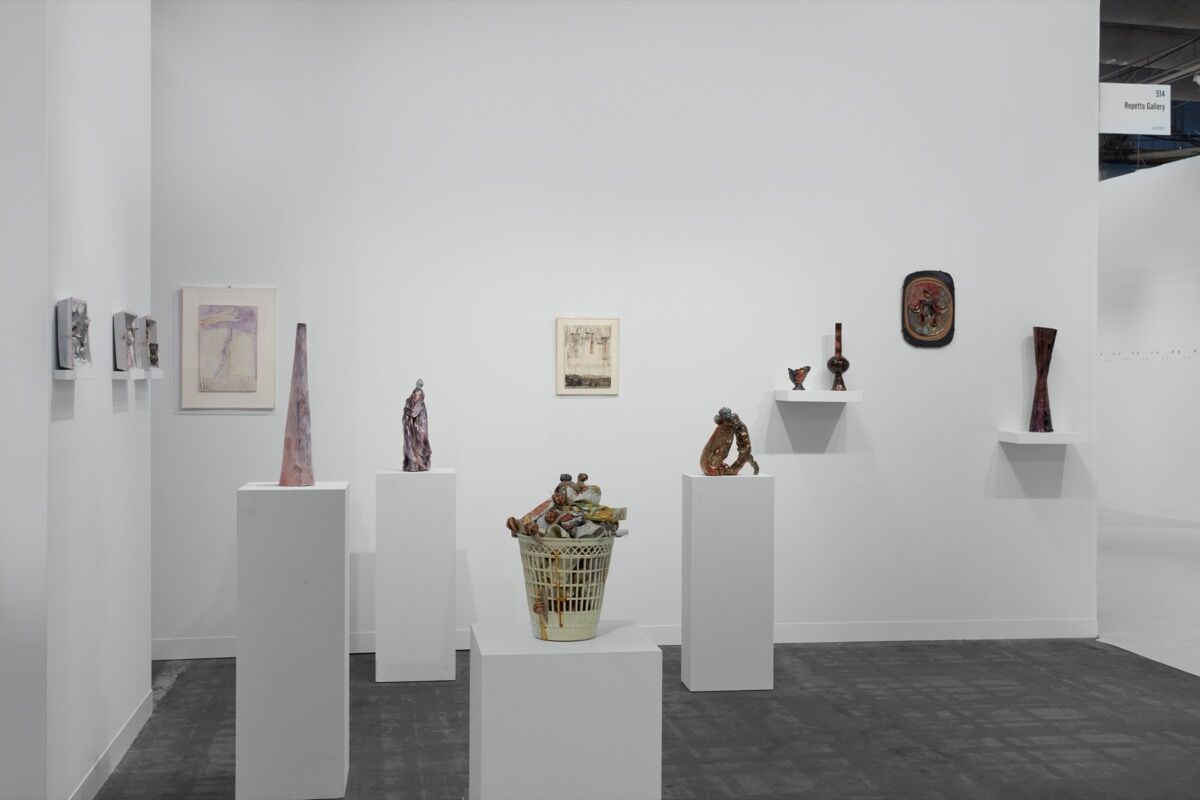 Find the fair’s most elegant sacrilege at Repetto’s booth, which has hung a Christ figure (Cristo, ca. 1956–57, $350,000) by
Lucio Fontana
. The lithe, white-and-blue, polychrome-glazed ceramic sculpture tilts out from the wall, its edges rough and its two pointed arms outstretched. The booth limits itself to Italian ceramics dating between 1929 and 2017, though it represents a vast array of works in the medium. 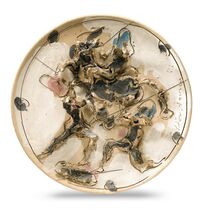 With works by Austin Lee 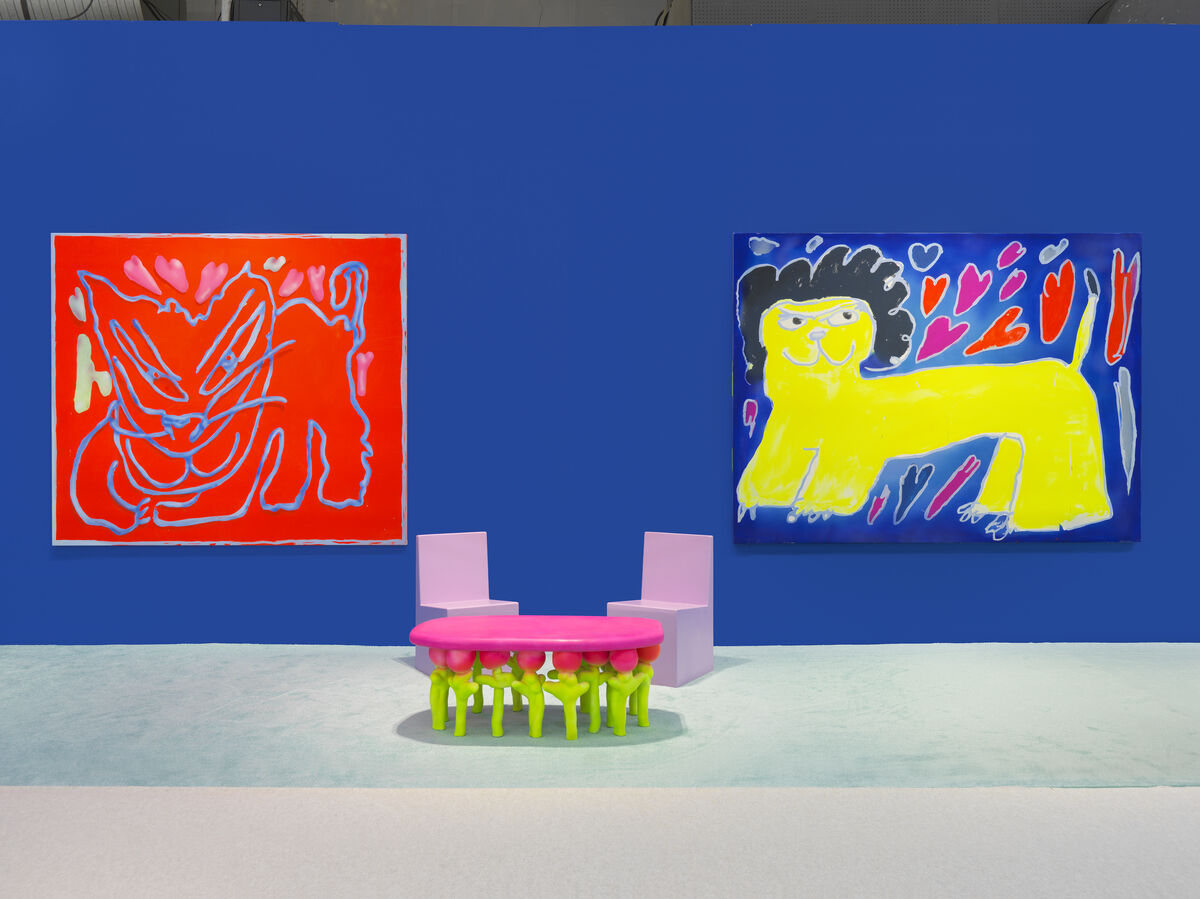 Jeffrey Deitch has mounted the brightest booth in the fair, showing
Austin Lee
’s Day-Glo paintings ($45,000), sculpture ($60,000), and his first table ($50,000). Lee starts his canvases in the digital world; using a VR headset, he paints pictures and builds sculptures in a special program. He takes screenshots of his work, then paints the results or fabricates his creation in three dimensions. 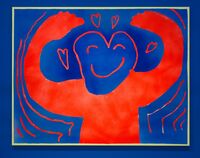 With works by Oren Pinhassi and Sheida Soleimani 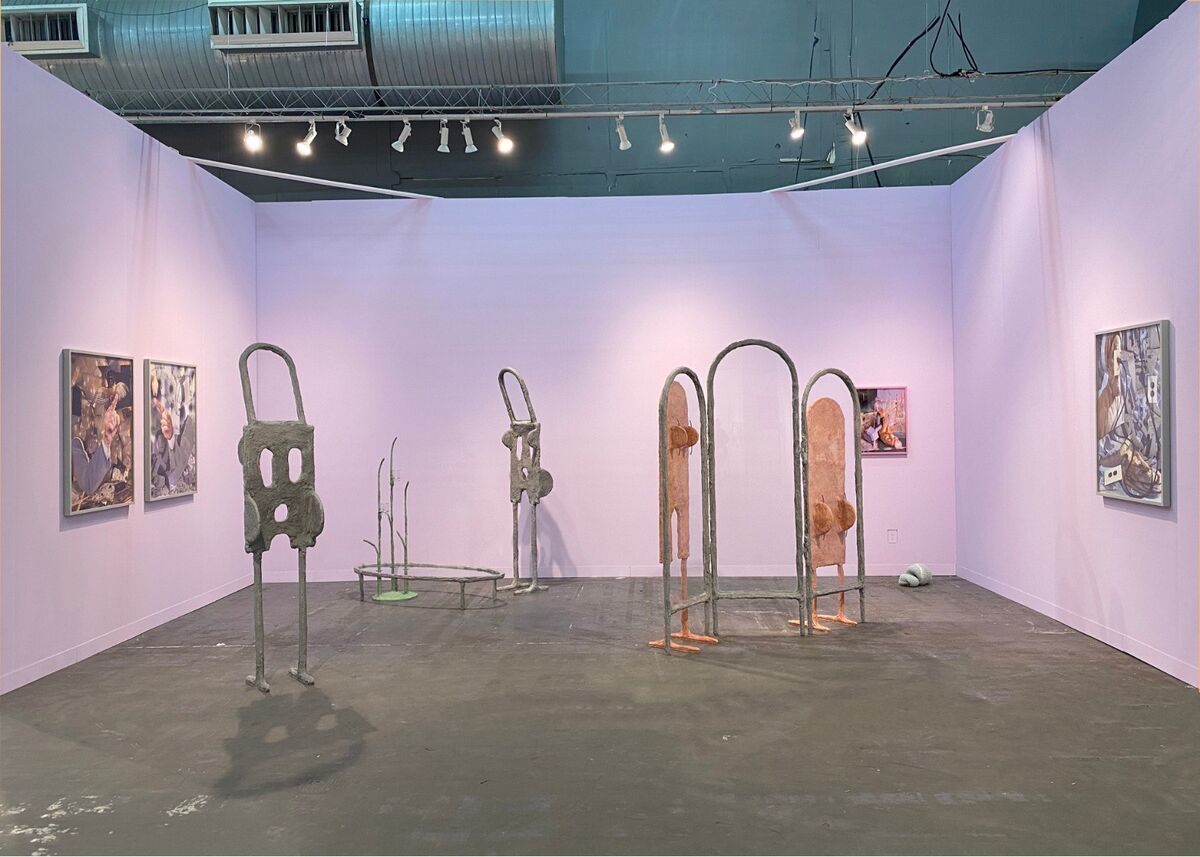 The lovely lavender backdrop at Edel Assanti’s booth belies the heavy political content in the exhibited work. The hue references Iran’s president, Hassan Rouhani, whose campaign color was purple. A photograph by
Sheida Soleimani
, titled Iran Heavy (2019), looks like good fun at first: It features an upside-down fish that appears to blow bubble gum, flopping against two pale purple dumbbells. Yet the fish, out of water, is probably dead, and the sticky bubble gum dripping in the background gives the photograph a certain “ick” factor. The work references how oil production has led to the deterioration of the fishing industry in Iran. Soleimani is the child of Iranian refugees, and her work, said Edel Assanti co-founder Charlie Fellowes, exudes the “acerbic political discourse” that she grew up with (all photographs are priced between $4,000 and $7,500 apiece). 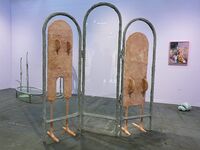 Edel Assanti
View Slideshow
3 Images
The gallery pairs Soleimani’s work with grainy sand-and-plaster sculptures (on offer for $11,000 to $22,000 each) by her friend,
Oren Pinhassi
. They reference the body with thin legs and looping heads.
Discover more works in the best booths at The Armory Show on Artsy.
Alina Cohen
Related Stories 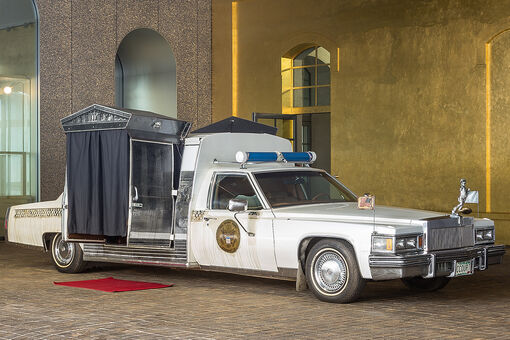