The 10 Best Booths at Art Basel in Hong Kong On Monday and Tuesday evening, the international art world filtered through Hong Kong to attend openings at the increasingly global set of galleries the city has to offer. The Pedder Building alone is home to Pearl Lam (Hong Kong, Shanghai, and Singapore) and Hanart (Hong Kong), as well as numerous American imports (Gagosian, Lehmann Maupin)—a microcosm, perhaps, of the seventh edition of Art Basel in Hong Kong, which opened to VIPs on Wednesday across two floors of the Hong Kong Convention and Exhibition Center.
This year, Art Basel in Hong Kong features 242 galleries from 35 countries and territories. “As good as the shows are in the West, at this standard, none of them have this kind of global diversity,” said Marc Spiegler, global director of Art Basel. Exhibitors hailing from São Paulo to Seoul, Calcutta to Melbourne, courted new collectors and coped with varying degrees of jet lag. Spiegler noted that he’s seen major changes in presentations since the fair began in the 2010s. “This is a discerning market,” he offered. “In the beginning, perhaps people thought that they could empty out their inventory.…The same quality is expected by the collectors as they would see at other shows, and the galleries meet that—or they don’t, at their own peril.” Below, we share highlights from the fair’s best booths.

With works by Lu Yang If you’re yearning for sensory overload, head directly to Société’s solo presentation of the young Chinese artist
Lu Yang
. For the fair, Lu created four films (all 2019) featuring four different characters—half-robots, half-gods—which play on elevated screens, while lightboxes in the same style hang on the walls. All of the work is shown within a gridded, silver structure with neon lights. The gallery’s Marius Wilms noted that the “futuristic” installation is what the artist calls “a cyber altar.”
Lu’s videos aren’t just visually noisy: Stick around and you’ll hear shouts and grunts emanating from the screens. Plastic, donut-shaped seats beckon viewers to watch the unfolding drama—or, as Wilms put it, “the whole epileptic thing.” The booth’s crowd of fairgoers suggested an eager audience for the work, and the gallery sold two lightboxes within the first few hours of the opening.

With works by Zhang Yu Advertisement
Pifo’s booth features two elevated platforms lined with long sheets of paper. Half-filled cups of tea sit on top, in pristine rows. On each day of the fair, at around 4 p.m., artist
Zhang Yu
will pour the tea onto the paper, creating circular brown stains. When the tea dries, the artist’s new artwork is complete. (Each work is priced at $135,000.)
Various finished versions cover the booth’s walls: The soft splotches evoke tree rings, their consistency a testament to the artist’s carefully honed spilling methods. “We consider him a minimalist artist,” said gallery director Sophia Wang, noting that Zhang wants to create the most neutral effect possible on paper. His tool of choice—tea—allows him to eschew more traditional media while invoking Chinese culture.

With works by Albert Oehlen and Rebecca Warren 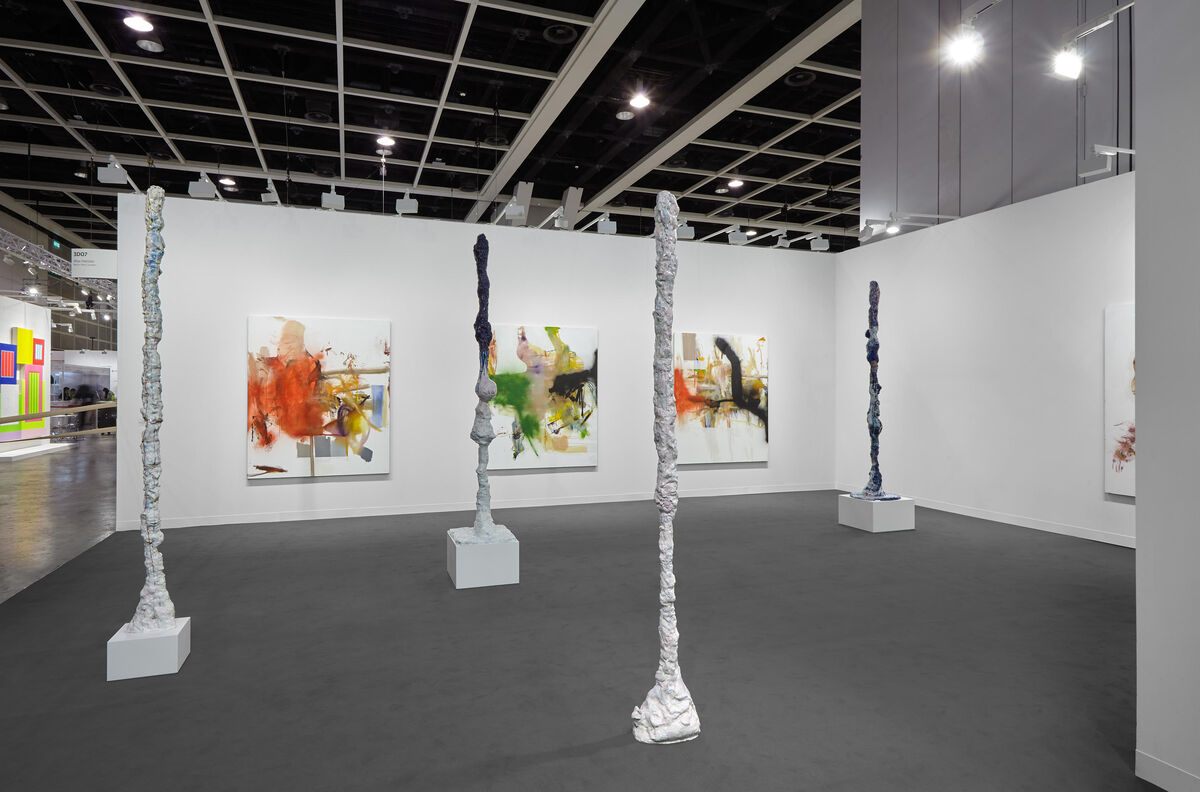 As the art world reels over the news of Gagosian’s record-breaking online sale of
Albert Oehlen
’s 1988 painting Untitled for more than $4.7 million, the artist’s future market prospects are looking good. And that bodes well for Max Hetzler, who brought a series of brand-new Oehlen paintings to Art Basel in Hong Kong. All untitled and dated 2010/2018, they feature busy arrangements of colorful gestures and smears against stark white backdrops. Hung against the booth’s white walls, the paintings’ negative spaces fade neatly into their surroundings.
In the center of the booth, British artist
Rebecca Warren
’s totemic, hand-painted bronze sculptures emerge from white blocks. Resembling lumpy poles with uneven paint jobs (and one bright-blue pom-pom), they evoke the feminist forms of
Louise Bourgeois
while pushing into stranger, messier terrain. One particularly compelling work, entitled The Nude (2014–19), looks like it has a full breast at its center.

With works by Tishan Hsu 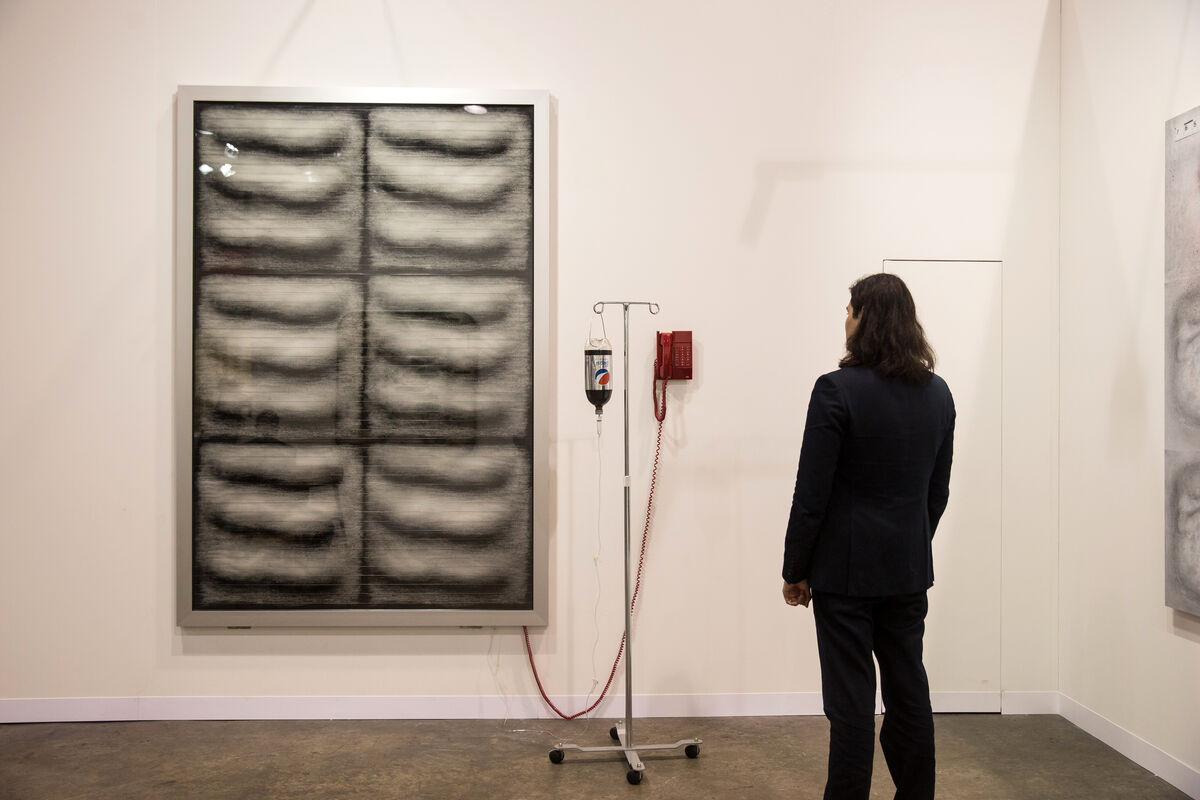 Tishan Hsu
’s mixed-media work Feed Forward (1989), on view at Empty Gallery’s booth, features a wheeled stand with an upside-down bottle of Pepsi, hooked up like an intravenous drip to a wall-mounted silkscreen. The print features shadowy lines resembling an X-ray of a rib cage; the piece’s final component is a red phone mounted on the wall. The strange, humorous juxtapositions ask viewers to reconsider the relationship between art and the body. Such haunting corporeality is central to many of Hsu’s works in the booth. And the artist, who’s been exhibiting since the early 1980s, is enjoying a minor resurgence.
“He was really active in the New York art scene back in the ’80s,” explained Empty Gallery’s Ching Ching Cheung. “I guess it was a bit too avant-garde for people to understand.…He just felt misunderstood.” Hsu distanced himself from the art world and began teaching at Sarah Lawrence College (and continued there until retiring recently). Hsu also has a solo presentation on view at Empty Gallery’s Hong Kong space, and his work is included in an exhibition space connected with Adrian Cheng’s new major development, Victoria Dockside. The artist hasn’t achieved so much concentrated attention since around 1990, when the Whitney Museum of American Art, the Katonah Museum of Art, and a series of other institutions featured him in their shows. The art world seems to be decanting Hsu’s practice, letting it breathe after years on the shelf. 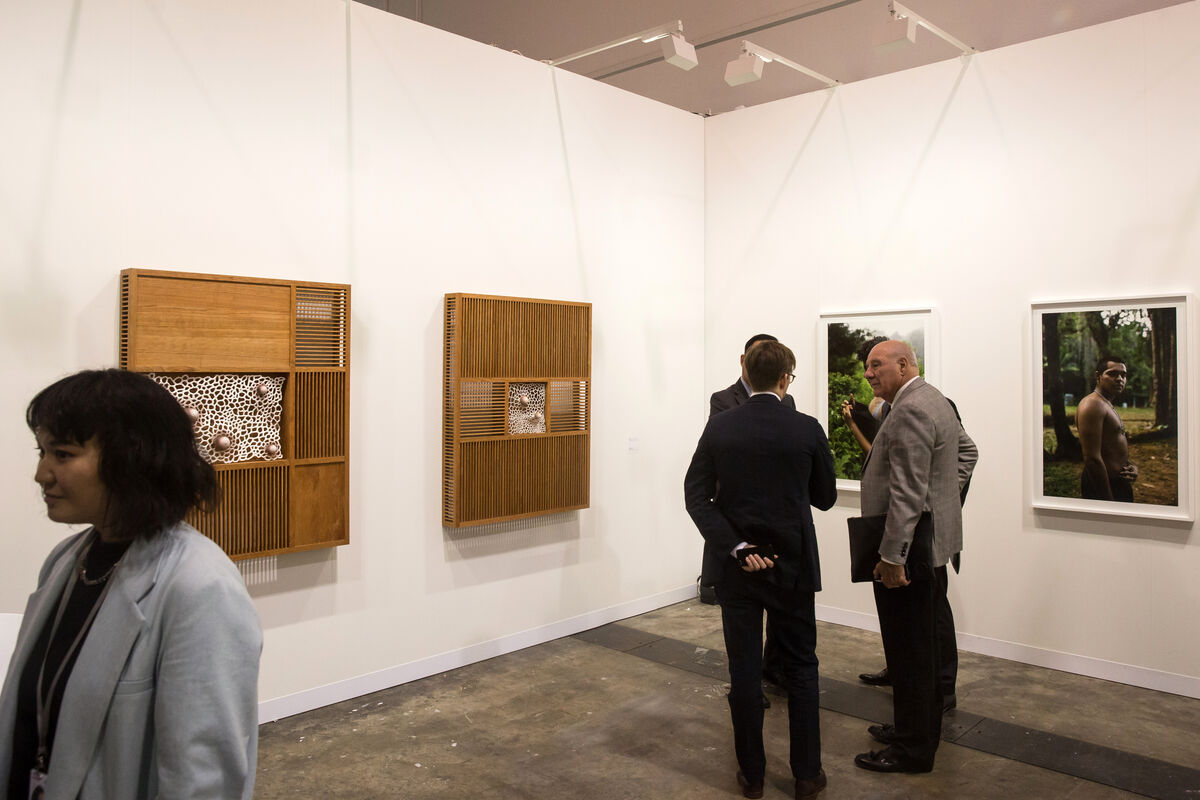 Hiding in the back row of the fair’s upper level, declining—respectfully—to speak to press (at least to this press person), 47 Canal isn’t asking for any attention. Yet the gallery is also showing one of the fair’s most delightfully bizarre sculptures:
Josh Kline
’s Saving Money with Subcontractors (Fedex Worker’s Hand with Pad) (2015). Part of a larger series that focused on the titular mailing and shipping company, the 3D-printed work resembles an open, packing peanut–filled FedEx box with gloves and a disembodied hand on top. Situated at a major art fair, the piece conjures ideas about the hidden labor that goes into such a production—the crating, shipping, unloading, and lifting that most fairgoers never see.
The ever-ingenious
Anicka Yi
is also debuting four new works at Art Basel in Hong Kong. One piece, and, and, and (2019), resembles a clear screen with an egg shape cut out of the middle, making way for connected tubes of pink fluid (which, given their positioning, look like sperm). Yi integrated desiccant beads into the composition, which typically help eliminate moisture, and LEDs give the piece an eerie glow. As with all of her work, cryptic science merges with keen design principles to create truly beguiling art.

With works by Roe Ethridge and Cheyney Thompson 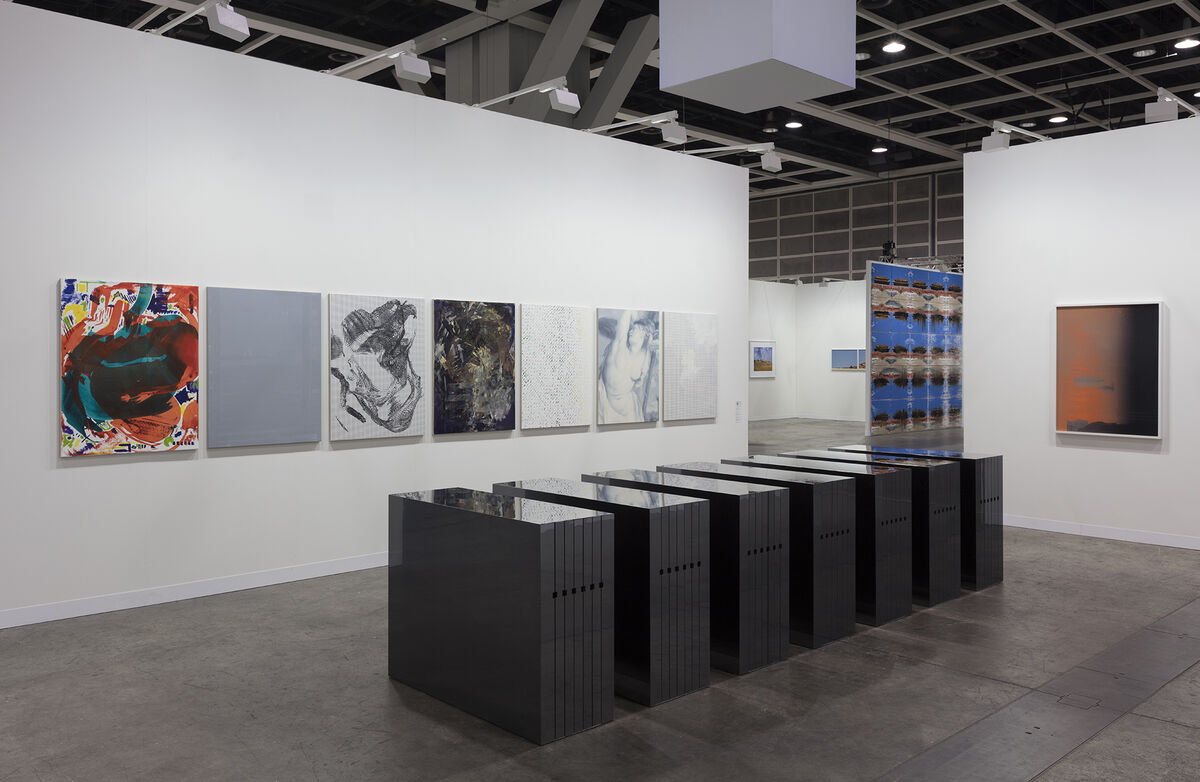 At Andrew Kreps’s booth, gallery partner Liz Mulholland watched warily as Kreps slid a
Cheyney Thompson
painting out of a sleek metallic box on the ground. Although seven of the artist’s canvases hang in the gallery’s booth, many more (all 2019) are stored in these dark kits that sit like treasure troves on the floor. Each box is titled storageDevice, with a code of identifying numbers and letters, and holds a set of seven paintings (they’re priced at $285,000, and individual pieces are $58,000).
Each storageDevice set combines works drawn from several different series, holistically reflecting Thompson’s practice over the past 15 or so years. Mulholland noted that while the paintings appear radically different—a monochrome; a vibrant abstraction; figuration based on a
Cézanne
painting of a
Rubens
painting—they share conceptual concerns. Underpinning various works are Thompson’s careful considerations about paint quantities, color systems, and appropriation. The booth also includes vibrant
Roe Ethridge
photographs, priced from $18,000 to $35,000.

With works by Egon Schiele With a masterful presentation of around 40 works by
Egon Schiele
, London gallery Richard Nagy introduces itself to Hong Kong with verve. The gallery is showing at the fair for the first time, and it has culled works not just from its own storerooms, but from private collections, as well (many pieces are not for sale). Gallerist Nina Hartl explained that of all the German and Austrian artists shown by the gallery, Schiele is “probably the most known” throughout Asia.
One highlight, Hartl pointed out, is a double self-portrait, Two Squatting Men (Double Self-Portrait), which Schiele created in 1918, just before he died (priced at $5 million, it’s not available). In the picture, the dual images of the nude artist rest against a dark, splotchy background of mauves and forest greens: Man merges with nature, and with paint itself. 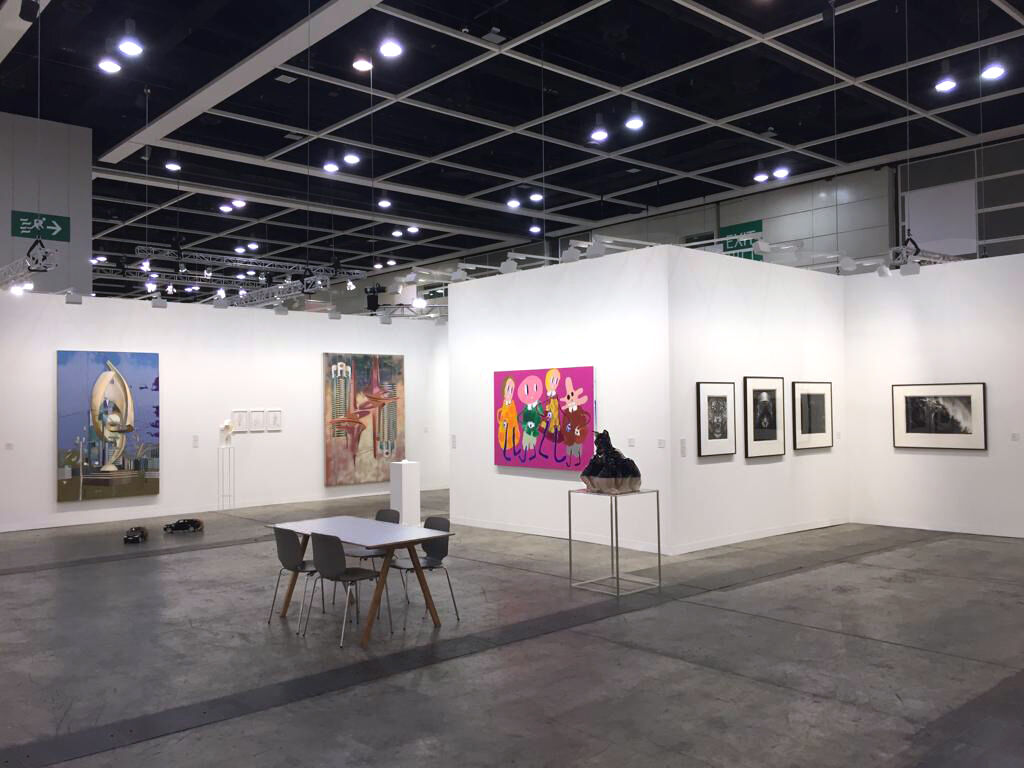 At Metro Pictures, a small presentation of new work by
Cui Jie
—in dialogue with art by
Cindy Sherman
,
Nina Beier
,
Louise Lawler
, and
Paulina Olowska
—offers a neat overview of the Shanghai-based artist’s practice.
Among the suite of new works are Cui’s paintings (each priced between $45,000 and $60,000), which depict fantastical architecture. Beijing TV Building (2017) features a gold,
Brâncuși
-esque sculpture that appears to merge with the tower behind it; while in Shanghai Industrial Building (2018), two shapes resembling corporate high-rises float in a cloudy background. A sculpture on view, Hangzhou Honglou Hotel #4 (2018)—priced at $15,000—looks like a three-dimensional building model, and adds literal depth to the ideas about space and placemaking that pervade the presentation. (Three drawings on view were priced at $5,000 apiece.)
A number of Nina Beier’s Automobile pieces, from 2018, sit nearby—remote-control cars with hair spilling out of the windows. “Come back when it’s quiet and we can have a race with them,” said gallerist Tom Heman.

With works by Imogen Taylor New Zealand–born painter Imogen Taylor paints on slanted canvases—parallelograms that reinforce her ideas about reconsidering art history from an alternative angle. Her bold hues and merging picture planes evoke
Cubism
and
Constructivism
, but with warmth and a distinct personal touch. Taylor paints on rough hessian (burlap), embracing her surfaces’ inconsistencies (nubs of fabric, loose strings). Hooded Viole (2019), with a bright orange-and-gray line separating two circles, plays on the Cubist trope of the fragmented musical instrument, while also suggesting a sumptuous still life. (Works are priced from $6,500 for small works to $26,000 for the largest work on view.)
“She talks about queer formalism,” said gallerist Michael Lett. “As a gay artist, she is interested in the intersectionality of her own life and bringing all these threads together.” According to Lett, Taylor’s process has involved going on pilgrimages to see an artist’s work, bringing that information back home, and filtering it through her own experience, as part of a larger tradition of New Zealand women artists—many of whom have been long overlooked (Lett mentioned
Rita Angus
and
Frances Hodgkins
as examples). Hong Kong gallery 10 Chancery Lane celebrates the 40th anniversary of the Stars Exhibition, the 1979 show that a group of Chinese artists put on illegally in a park across from Beijing’s National Art Museum of China. The government shut it down, and the artists protested until officials relented and reopened the exhibition. At Art Basel in Hong Kong, the gallery shows work by members of the
Stars Art Group
, including
Ma Desheng
(moody woodblock prints),
Huang Rui
(geometric paintings), and
Wang Keping
(dark wooden sculptures of abstracted bodies and couples). Prices range from below $10,000 for a print to the mid–six figures for a painting.
Gallery director Frank Lonergan noted that he views the Stars artists as major precursors to Chinese contemporary artists. “There’s really a period of time [until the 1989 Tiananmen Square protests] of robust creative and artistic freedom in China, driven out of this Stars exhibition,” he offered.
Alina Cohen
Related Stories