Sam Gaskin
Nov 9, 2018 6:05pm
Art021 is a real success story, a Shanghai art fair that’s a hit with young Chinese collectors, because it was started by young Chinese collectors. Now in its sixth edition, which runs from November 8th through 11th, it has grown to accommodate 103 galleries—but David Chau, who co-founded the fair with Kelly Ying and Bao Yifeng, said Art021 isn’t trying to be another Basel or Frieze. The goal is to be the right fit for China—where collectors skew younger and trendier—and to help both domestic and emerging international galleries become global leaders in the next decade or so.
“Some people have criticized us, saying that we have a mixture of the top galleries from around the world with some not-so-great galleries,” Chau explained. “But that’s our point, and we want to help these local galleries to become better!”
This year, the standard across the fair was higher than ever, not only because local participants are improving, but also because global heavyweights have entered the ring. Below are 10 of the best booths, comprising both emerging and blue-chip galleries, arranged in alphabetical order. 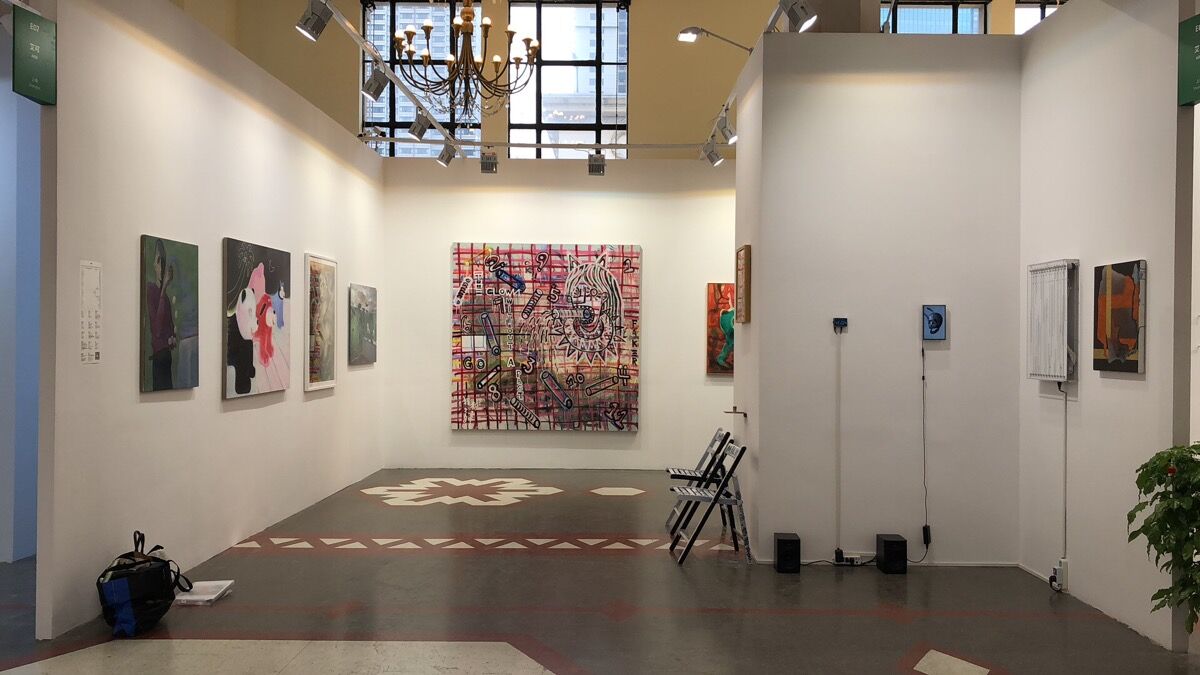 “It seems this year galleries are bringing a lot of media other than paintings,” Chau said, “which, to me, is exciting, because I am probably one of the largest collectors of installation and video works in China.” AIKE (previously Aike Dellarco) delivered with two peculiar little screens by Chinese artists Wang Changchun and
aaajiao
. Wang’s miniature audio-visual installation Well Then (2018)cycles through images of lo-fi emoticons—the expressive punctuation that was born long before more elaborate emojis arrived, with their different skin tones and animated tongues. Meanwhile, aajiao showed a 3D-animated rabbit skull with its ears in its eye sockets, called Untitled-0(2015). The booth, which boasts its own exhibition-style title—“The Far East Circus”—also houses peppy paintings by
Wang Xiaoqu
and Nathan Zhou. 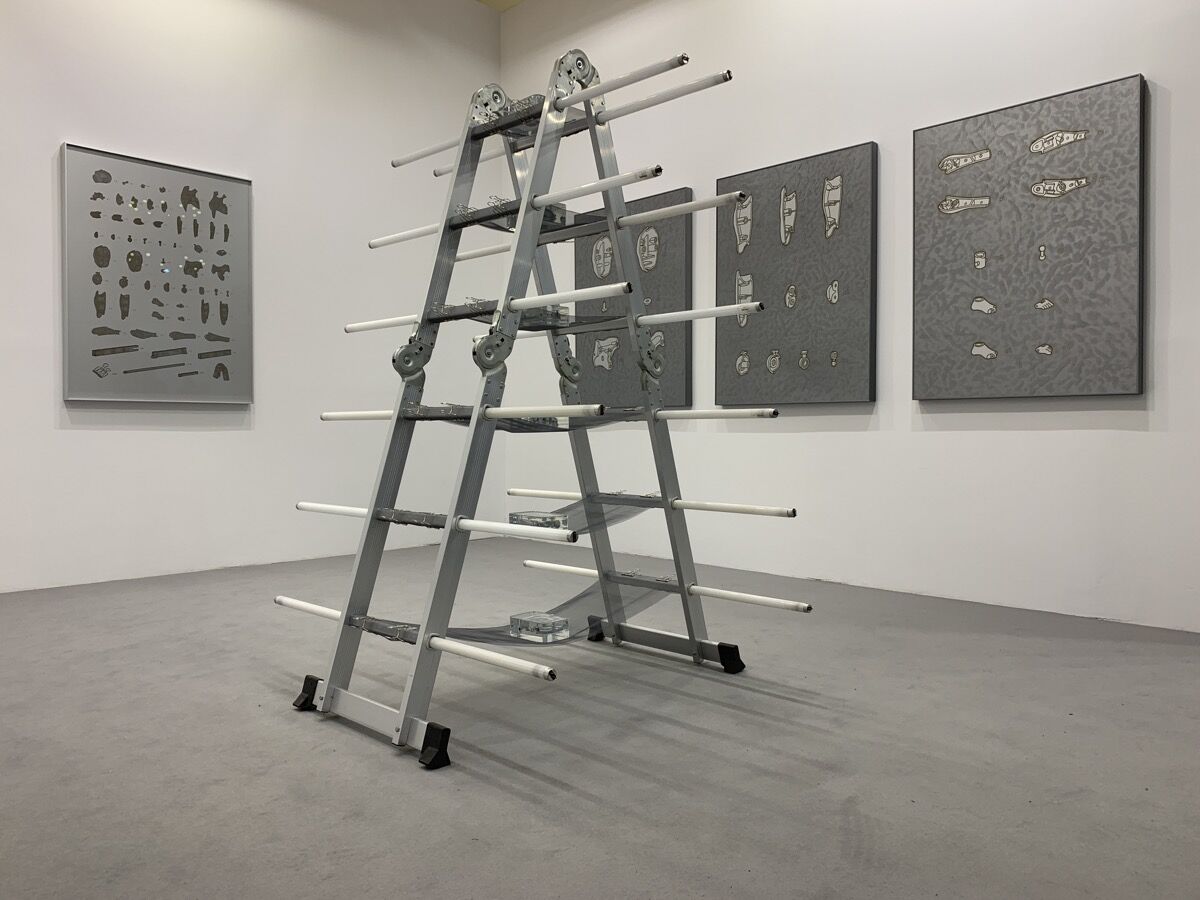 Advertisement
Arario Gallery’s booth stands out with a strong monochrome selection: a large
Kohei Nawa
stripe painting,
Byoungho Kim
’s organic-yet-alien urethane-coated steel sculpture Beautiful Replication S95VP1D35T6 (2017), and
Gao Lei
’s installation Homo Sacer (2018). Gao’s work consists of an aluminium ladder, worn fluorescent tubes, and nets used to suspend pieces of toy human anatomy. The work takes its name from a text by Italian philosopher Giorgio Agamben, known for his thoughts on biopolitics and the reduction of people to “bare life” by authoritarian regimes that alienate them of their human rights. Gao’s use of forms found in plastic toy-model kits is reminiscent of the Gunpla robot parts used, incidentally, to create colorful surfaces by Yokohama artist
three
at Standing Pine gallery in the fair’s Approach section. 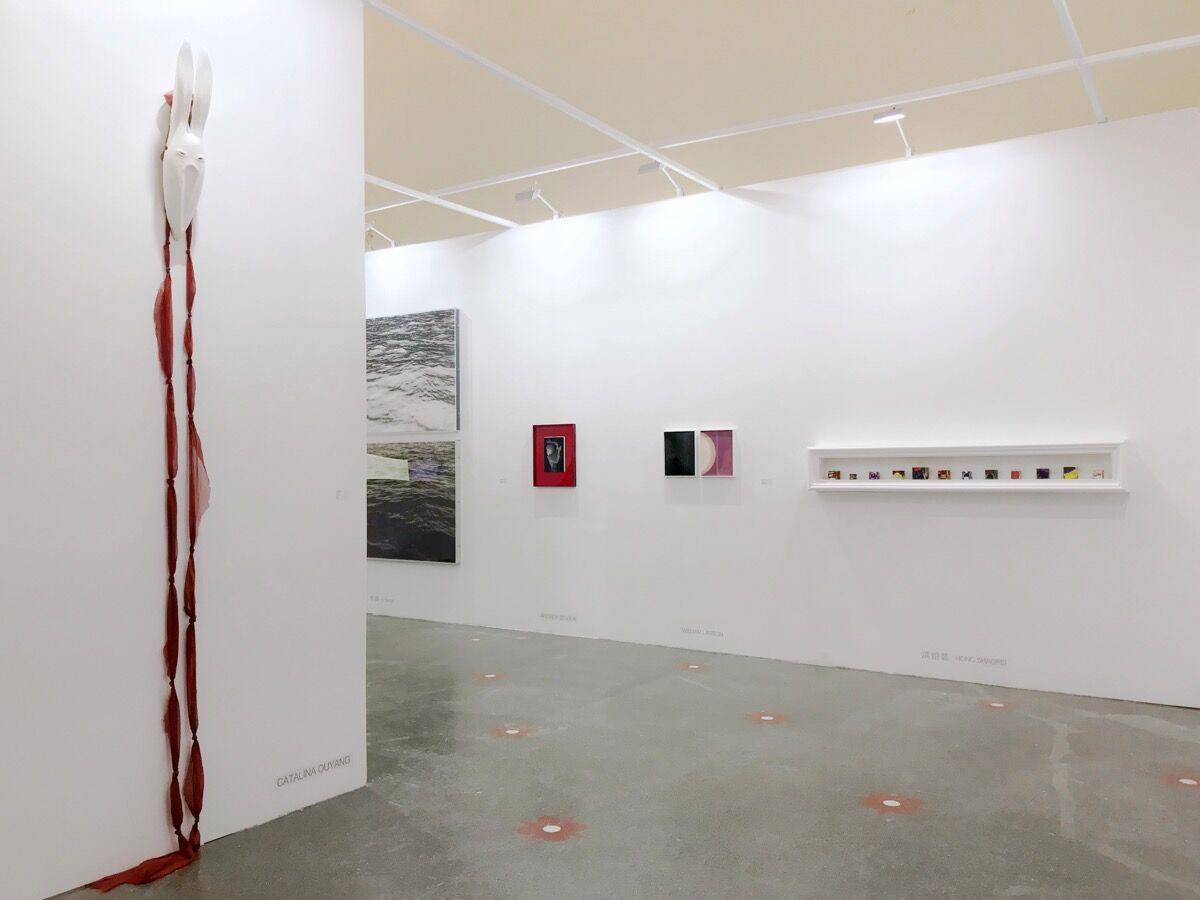 One of the more peculiar collections of curios at Art021 comes from Beijing Art Now Gallery (BANG) and its Los Angeles sister space, Make Room. With its spring mounted gold “大”(“big”) character, Zhou Tong’s Great leap (跳大神) (2017) is a wooden shrine cabinet for the worship of growth. That theme is twisted in a more absurdist way with Wooden Sandals (5 feet long, and rising over 2 feet off the ground.) Other disparate works here include
Catalina Ouyang
’s Howler (lunar rabbit mask) (2018),
Zheng Wei
’s Intimate Corpse No. 2 (2018)—which looks like a broken version of
Henri Matisse
’s Dance (1910) embedded in astroturf—and a little oil-on-plexiglass painting by Andrew Sendor, Casparina on December 2 (2018), that’s as cinematic as the raising of a velvet curtain.

Another one of the 18 galleries participating in the fair’s Approach section, Blindspot Gallery presents a new solo project by Hong Kong artist
Sarah Lai
, entitled “Kyuusekkin! (Love SOS).” It was also one of very few galleries at Art021 to fully transform its booth (over at West Bund Art & Design, it’s worth mentioning, David Zwirner devoted its whole booth to a
Dan Flavin
light installation, and Tabula Rasa provided a forest floor for its landscapes by
Tu Hongtao
, strewing fragrant Russian pine wood chips on the ground). Blindspot’s efforts paid off; it has wallpapered the booth’s walls and installing café-style seating to immerse viewers in Lai’s dreamy, schoolgirl-crush, kawaii sensibility. Inspired by Japanese anime from the 1980s and ’90s, Lai’s paintings are gauzier, but almost as flat as the lovely acrylic-on-paper
ukiyo-e
–inspired
Pop
paintings
Takato Yamamoto
showed at Gallery Kogure, a few booths down. 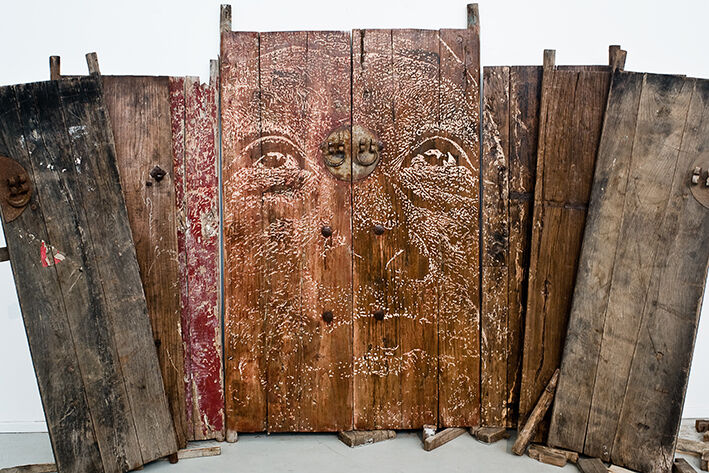 Vhils
Scratching the surface installation, 2016
Danysz Gallery
For his work Young people perspectives (2018),
Xi Song
had a pastel-colored keyboard manufactured in Shenzhen. Ironically, the text that its keys spell out—anodyne political gibberish about the core values of socialism and prosperity—seems entirely oblivious to young people’s concerns. The work’s industrial commodity finish contrasts with works by Portuguese street artist
VHILS
, who has spent quite some time in Shanghai, carving his way through posters, etching faces into buildings slated for demolition, and even chipping away at the external walls of Danysz Gallery. Among the best works in the booth is a set of wooden Chinese doors VHILS has upcycled with the image of an old Chinese man’s face—a demographic here that’s often ignored, just as the city has shown much disregard for its older architecture. 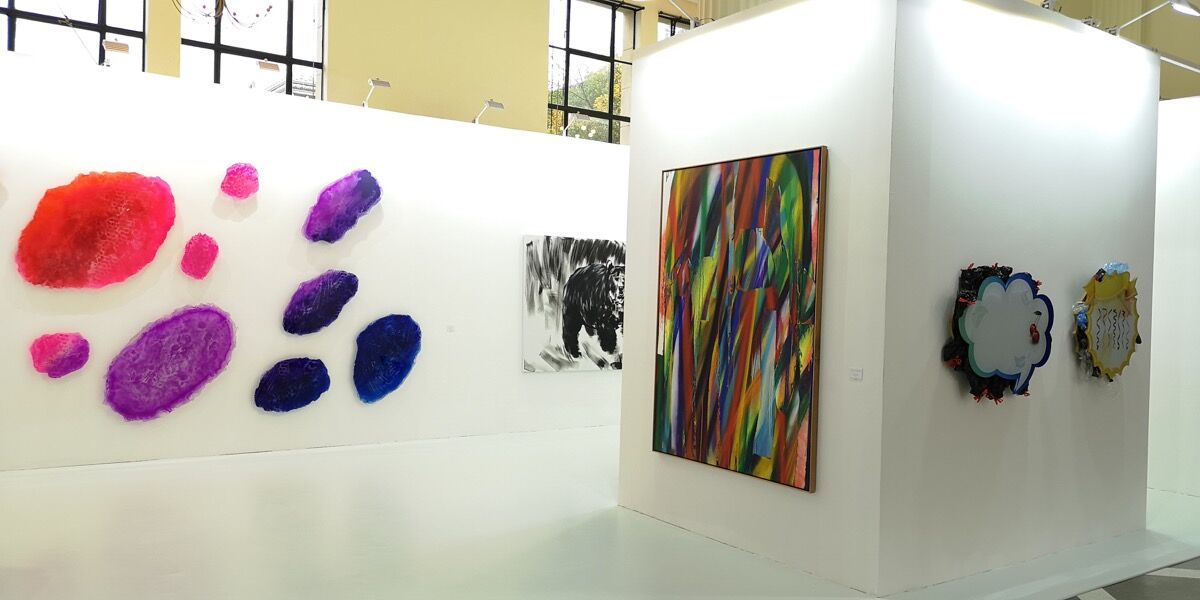 A mammoth
Katharina Grosse
acrylic-on-textile painting was draped in pride of place in the main hall of Art021’s host venue, the Shanghai Exhibition Center (though even such a huge work looks almost ornamental compared with the chaotic, full-room installations at her solo exhibition, “Mumbling Mud,” now on at the chi K11 Art Center). Of course, Grosse’s spray-gun painting style must be somehow contained, excerpted, and put up for sale; in this booth, it takes the form of the acrylic-on-canvas Untitled (2017), which retains some of the aura of her wilder works. The booth is strong throughout, with
Bernard Frize
’s Suret (2015), a unicorn-hued vertical wipe on canvas; a gorgeous oil-on-canvas bear by
Herbert Brandl
; and
Daniel Knorr
’s Depression Elevations (Net-Well-Around) (2018), which consists of brightly pigmented polyurethane casts of Los Angeles potholes. 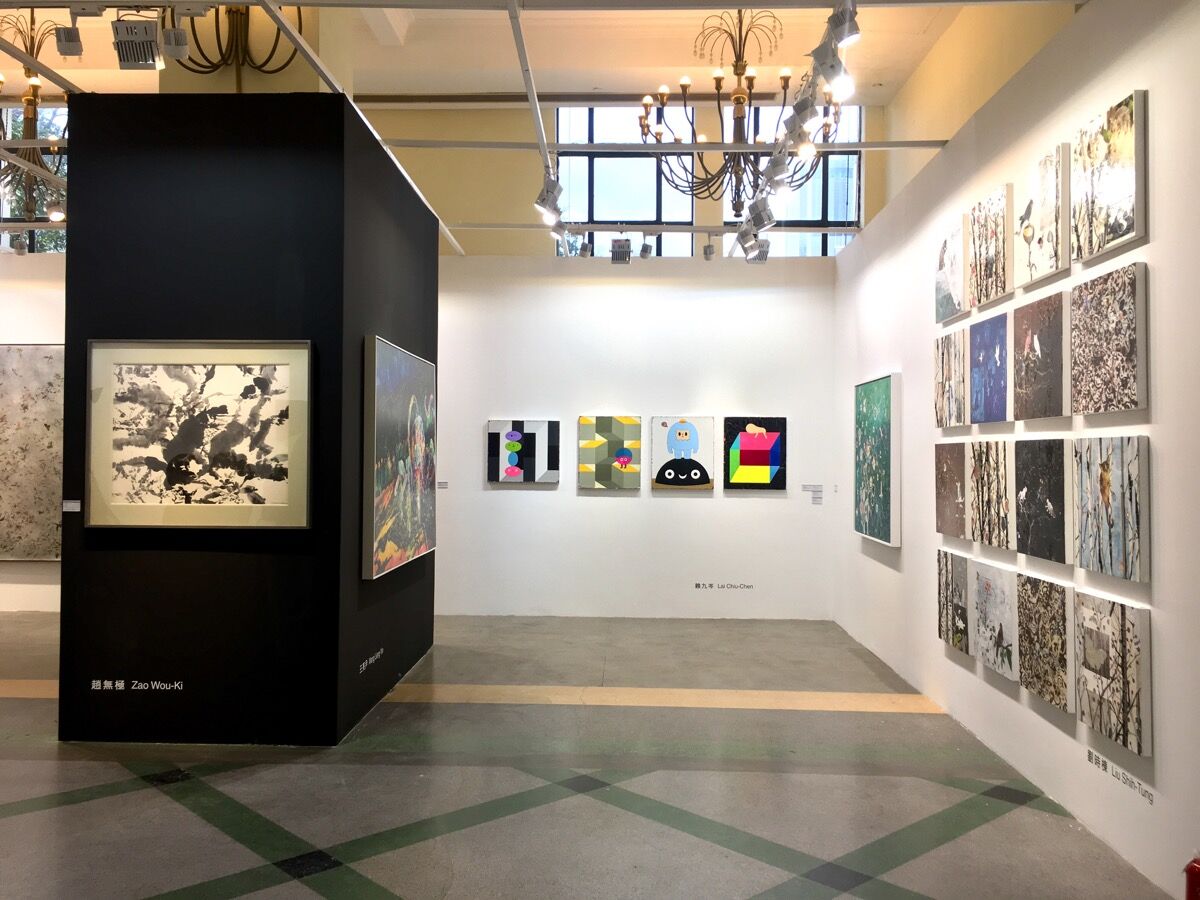 Crammed with 21 works by eight artists, Lin & Lin’s booth is devoted to painting. The biggest single work is
Wang Liang-Yin
’s acrylic-on-canvas Desolate Octopod (2018), which seems to be engaged in the same gambit as
Takashi Murakami
(also showing at Art021, in a needless crossover with Off-White designer Virgil Abloh, at Gagosian’s booth) in trying to maximize the complexity of color and form, while hooking viewers in with the last remnants of something recognizable. Other works were simpler—such as the cartoonish, graphic works by
Lai Chiu-Chen
, paintings that could as easily be vector drawings for posters—and more lyrical, like
Shen Liang
’s thrumming, energetic abstracts in colored pen, lead, and butterfly powder.

A large lenticular by Julian Opie, Maria Teresa with red shawl (2008),may have brought guests into the Maho Kubota booth, but it was works by
Teppei Takeda
that kept their attention. Takeda’s portraits—formed by what look like as few as six thick, shiny, wet brushstrokes—are, upon closer inspection, revealed to be paintings of paintings, painstakingly built up in a
hyperrealist
style, a conceit reminiscent of
Roy Lichtenstein
’s “Brushstrokes” series (1965). Though it was the gallery’s first time showing Takeda outside Japan, both of his acrylic-and-oil-on-panel paintings, Painting of Painting 015 (2018) and Painting of Painting 017 (2018), sold on the opening day. This was Maho Kubota’s second time participating in Art021, and the gallery’s first time in the main galleries section, having joined the Approach section last year. 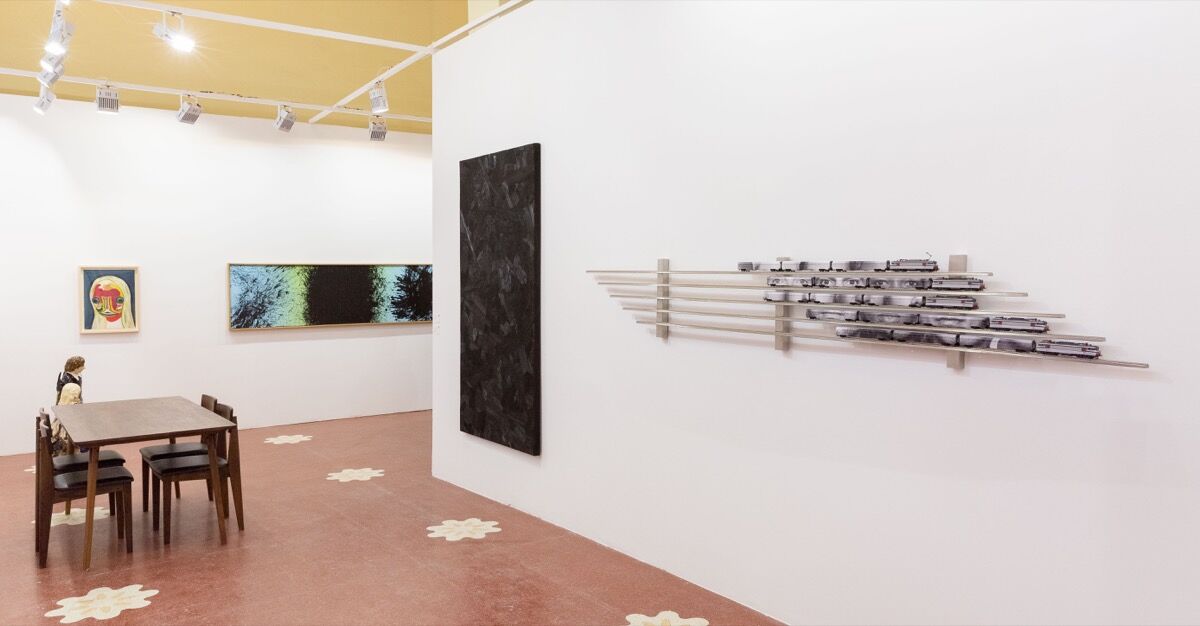 Installation view of Perrotin’s booth at Art021, 2018. Courtesy of Perrotin.

Zhou Chong was only 20 years old when he began collecting contemporary art, but he has since amassed works by
Zeng Fanzhi
,
Yayoi Kusama
, and
Yang Fudong
, among many others. On visits to Art021, he says, Perrotin is one of the Western galleries “I’ve been most amazed by.” It’s easy to see why: This year, Perrotin put on another great show with an eclectic collection of seductive, colorful works by Bernard Frize,
Daniel Arsham
,
Hans Hartung
, and
Izumi Kato
, along with a kinetic piece by
JR
entitled Eye Contact #13, Diagonal Trains (2018). The French street artist papered three faces on the carriages of five model trains and set them running left and right on tracks mounted above one another on the booth wall. The work stretches and distorts the faces—suggesting sliding identities, sideways glances, and suspicion—before resolving into something more human, like empathy. 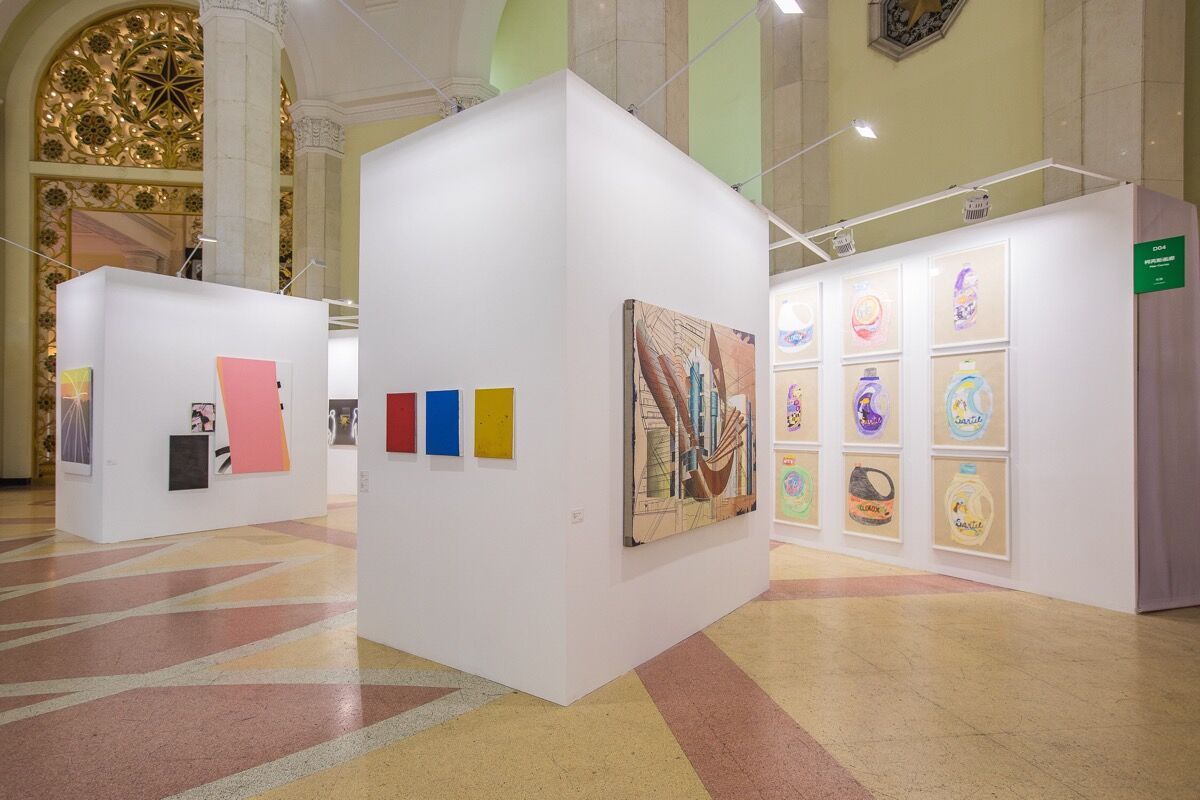 Pilar Corrias had one of the standout booths this year, with works by
Chris Huen Sin Kan
, a favorite Art021 discovery of real-estate developer Lu Xun, founder of the Sifang Art Museum in Nanjing. Other standout pieces include an entire horror movie, of sorts, that plays out across a trio of paintings by
Tala Madani
, and pieces by
Tschabalala Self
—whose solo show, “Bodega Run,”is running concurrently at the Yuz Museum.
Sam Gaskin
Related Stories