Nate Freeman
Feb 15, 2019 12:43pm
Art collectors and dealers in Los Angeles woke up Thursday morning to find that the opening day of the first-ever Frieze Los Angeles would be one of the few dozen occurrences of rain per year in the City of Angels. But despite the torrential downpour that threatened flooding in parts of town, throngs of people made the trek to Paramount Pictures Studios for the fair’s morning VIP opening, including collectors such as Michael Ovitz, Marty Eisenberg, and Don and Mera Rubell, as well as actors including Brad Pitt, Michael Keaton, Jodie Foster, and Sylvester Stallone.
The scene under the tent was a leaner and meaner Frieze offering, with 70 exhibitors, in contrast to the usual 160 in London, and galleries generally brought work a notch above the wares hawked at Frieze’s New York outpost. Sales were coming in, too—Hauser & Wirth sold its booth-sized
Mike Kelley
installation Unisex Love Nest (1999) to a European foundation for $1.8 million, while Lévy Gorvy sold
Günther Uecker
’s Spirale III (2002) with an asking price of $1.2 million and
Yayoi Kusama
’s Infinity Nets (B-A-Y) (2001) with an asking price of $1.6 million.
The opening came as the art world takes Tinseltown by storm. In addition to Frieze, fairs such as Art Los Angeles Contemporary, Felix LA, and Spring/Break Art Show are opening their doors this week. Collectors such as Ovitz and Jumex fruit heir Eugenio Lopez are opening their homes for cocktail parties; White Cube is taking over the notorious Chateau Marmont hotel for a wild bash; and Jay-Z and Beyoncé made an appearance at the opening of a show co-presented by Swizz Beatz at UTA Artist Space.
But let’s not let all the hubbub get in the way of the art. Here are the best 10 booths at the first edition of Frieze Los Angeles.

With works by Mike Kelley 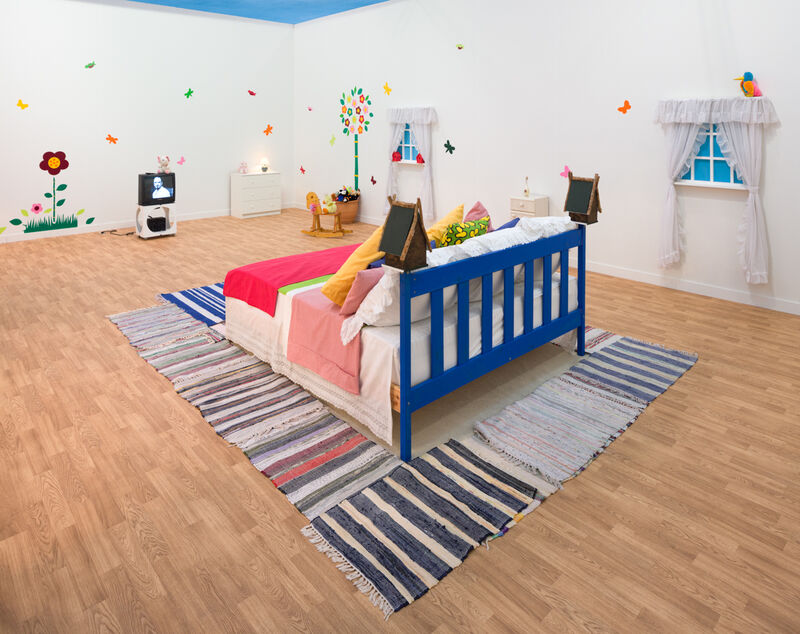 A mic drop of an art fair booth. Instead of carefully selecting a grab-bag of artworks from its formidable roster of some of the world’s greatest living artists, Hauser & Wirth decided to show a single work, and it is a doozy.
Mike Kelley
made the booth-sized installation Unisex Love Nest (1999) after finding an image of a child’s bedroom in the magazine First for Women. He decided to recreate it through his creepy-cuddly lens, imbuing what at first seems like a vision of innocence into a palpably menacing installation. There are intimations of gender-switching and repressed sexual fantasies in every ripple of the bedsheet, and a TV showing a crossdressing-friendly David Bowie.
It’s a bit of a homecoming for the work: After Kelley completed it two decades ago in Los Angeles, the work sold to a European collection that loaned it to museums in Europe, but never any in the United States. And it now goes to another European collector, a foundation that wished to not be named. In a statement, Hauser & Wirth partner and vice president Marc Payot said, “For us this was a non-commercial endeavor, but to our delight we have placed the installation within the first hours of the fair.”

With works by Kathryn Andrews 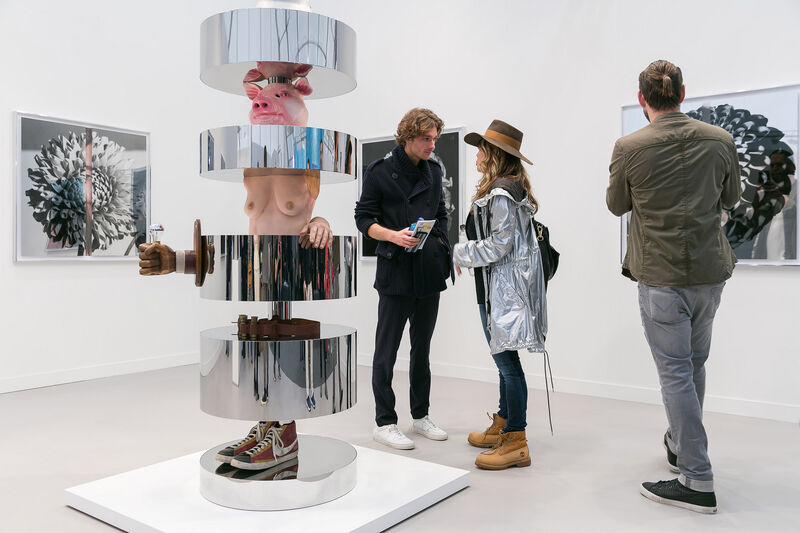 Advertisement
In deference to the strong gallery scene here in La La Land, Frieze made sure the first two galleries that visitors saw when they entered the tent were Blum & Poe, one of Los Angeles’s foundational galleries, and David Kordansky Gallery, which has been most closely associated with L.A.’s rise as a world-class art city. While Blum & Poe opted for a group booth to showcase all of its local artists, Kordansky gave the whole booth to one L.A.-based artist,
Kathryn Andrews
.
Here, Andrews chose to investigate gender-based power dynamics, and how they relate to the film industry’s myth-making. The point of entry is the Black Dahlia murder, the grisly killing of aspiring actress Elizabeth Short that remains unsolved. The wall works feature dahlia flowers, while a sculpture uses film props—a German soldier’s helmet, a pig’s head, a woman’s torso—to reference Short’s killing, while also highlighting the objectification of women’s bodies in Hollywood. The work proved to be a hit. By the end of the day, 11 wall works had sold for $40,000 a pop, and a sculpture involving a prop from Terminator 2: Judgement Day sold for $85,000.

With works by Mark A. Rodriguez 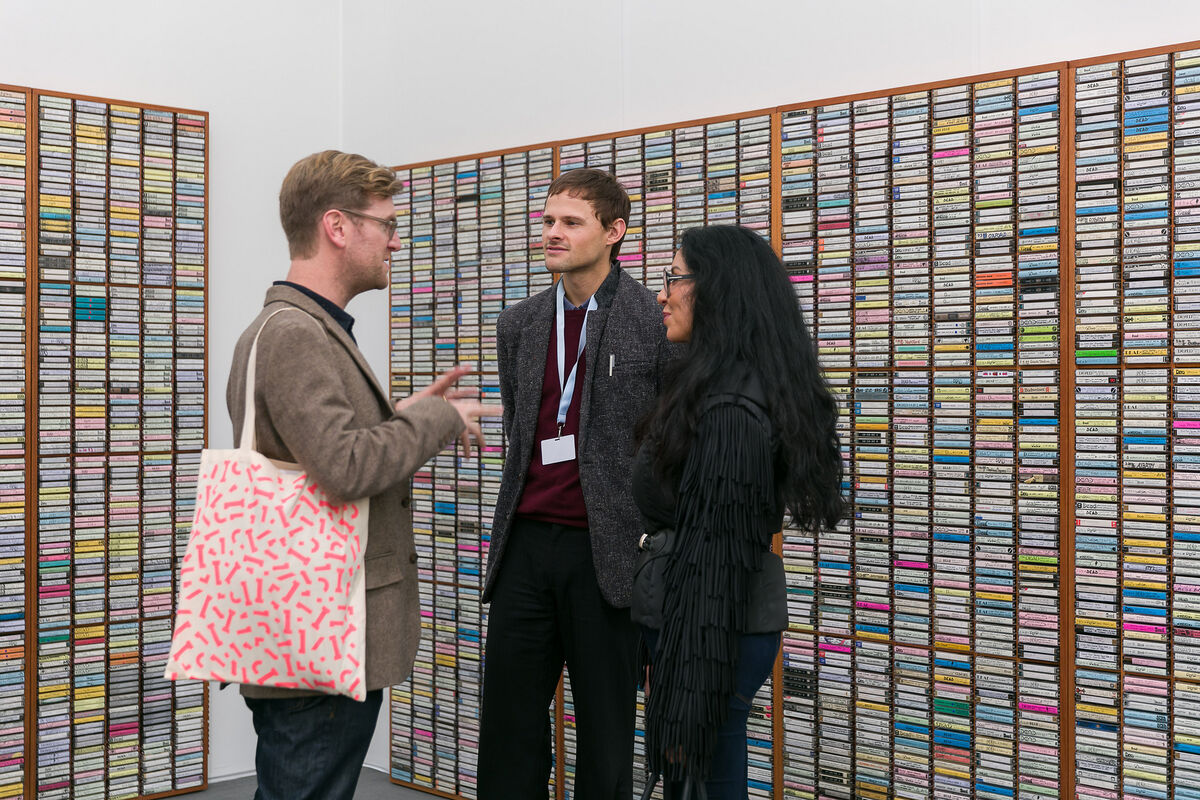 Looking across the tent towards the booth of local outfit Park View / Paul Soto, one could be forgiven for thinking that the works on view, by Los Angeles–based artist Mark A. Rodriguez, were
minimalist
abstract
paintings, large canvases covered with rectangular panels in different colors. Get closer, though, and you’ll see that each work is actually a rack sculpture filled with thousands of cassette tapes. Get even closer, and it’s clear that the tapes are live Grateful Dead shows, dutifully recorded by the legions of Deadheads that followed the band on the road.
Though this is a seemingly impossible number of recordings of Grateful Dead, it’s not complete. A press release explains that the work is less about Jerry Garcia and more about investigating the “ritual activity of attempting to ‘complete’ a collection.” One thing was completed during the first hours of the fair: The gallery sold one of the two available works to the collector Beth Rudin DeWoody.

With works by Judy Chicago 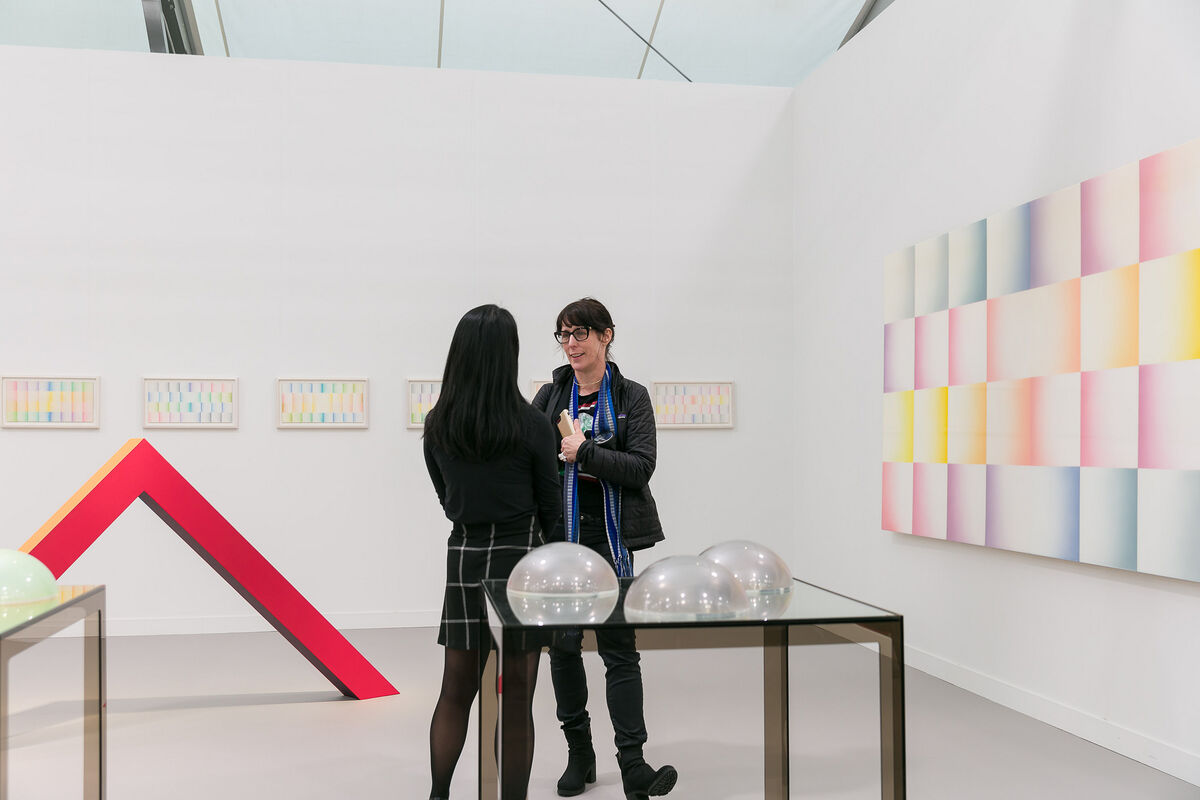 Perhaps more than any other dealer showing in the fair, the existence of Frieze Los Angeles can be tied to Jeffrey Deitch. He’s the art advisor to Ari Emanuel, who, in 2016, purchased a 50–70 percent stake in Frieze through his talent agency, Endeavor, and one year later, Deitch announced plans to open another gallery space not far from the fairgrounds at Paramount Pictures Studios. Up now at that space is “People,” an exhibition of figurative sculpture, but Deitch’s fair booth shows abstract studies on paper by pioneering feminist artist
Judy Chicago
.
Deitch discovered the airy, pastel-colored drawings during a visit to Chicago’s studio, where he found them stored in a drawer, unseen since the 1970s. Similarly, the large sculpture that fills the booth, Zig Zag (1965/2019), was refabricated for the fair after Chicago abandoned plans to make it in the ’60s. The artist, who worked in Los Angeles for many years, will have a show at Deitch’s L.A. gallery in September. 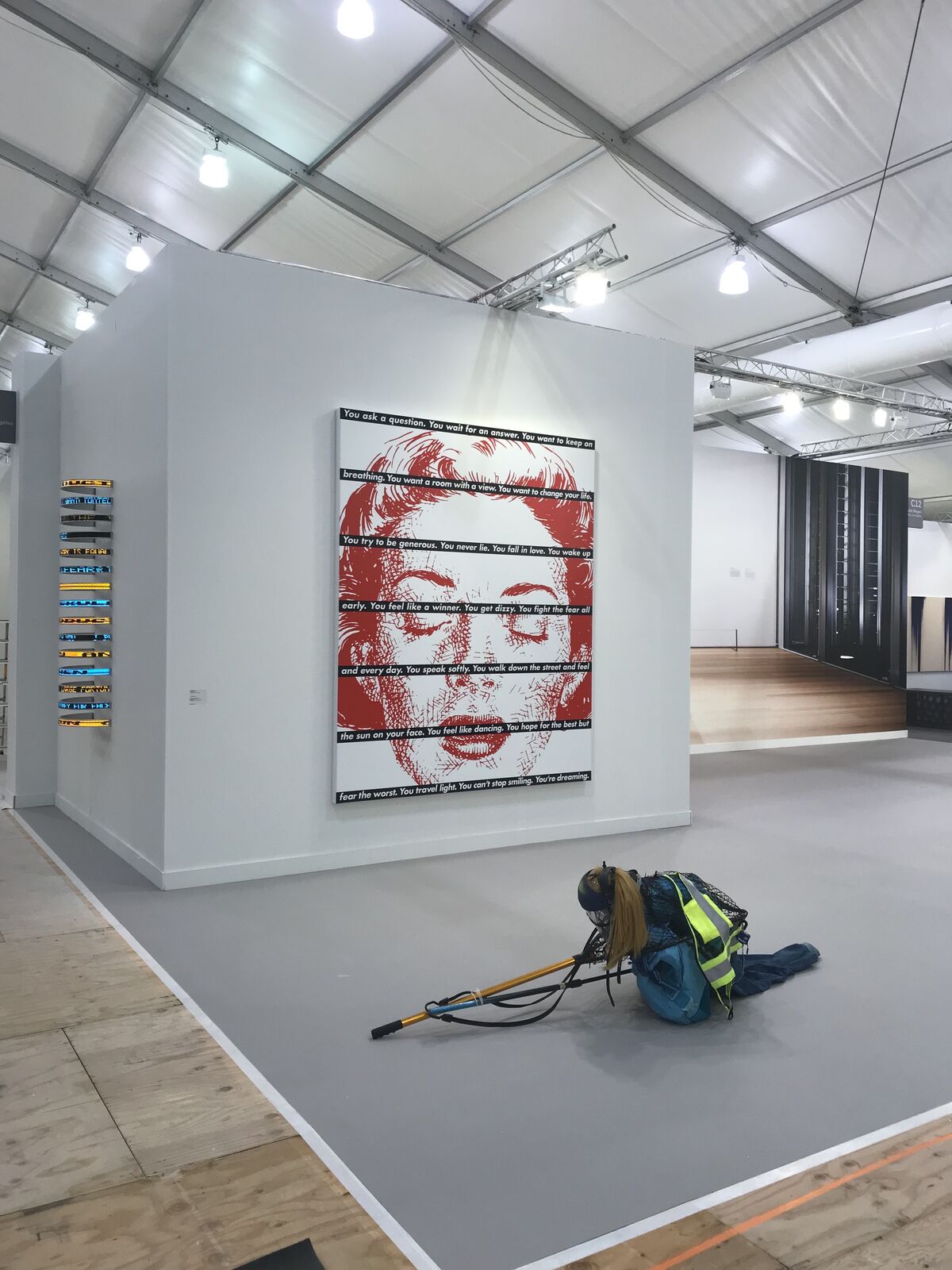 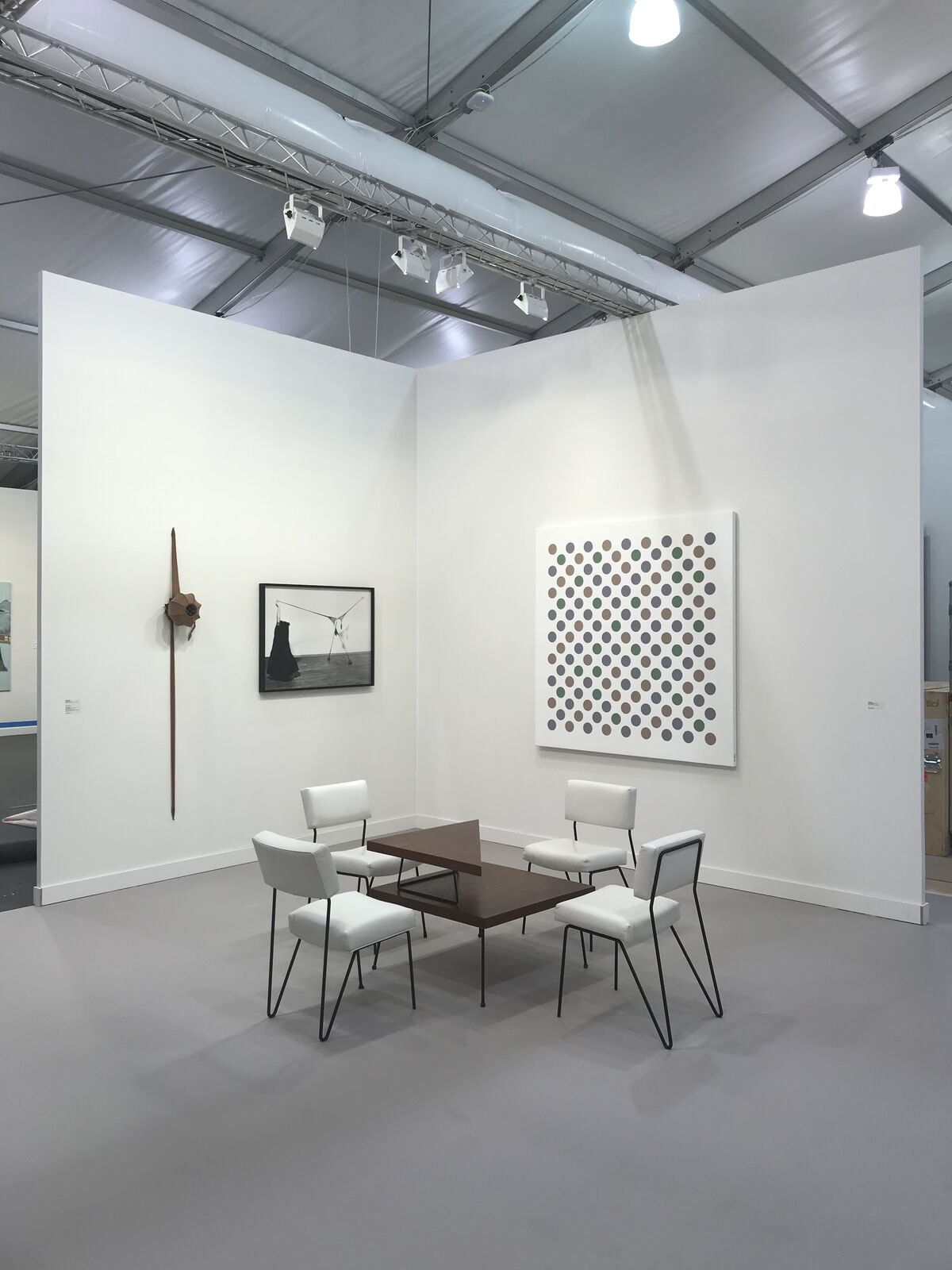 In 2014, German gallery powerhouse Sprüth Magers announced that it would be leapfrogging over New York and opening its first stateside gallery in Los Angeles. In the years since it opened, the outpost has become one of the city’s foremost galleries, hosting exhibitions of its stacked roster of artists at a two-story space across the street from LACMA. This week, it opened a new show by
Sterling Ruby
, “Damnation,” which is proving to be one of the more polarizing shows of the week.
Ruby’s been focused on his vitrine-like sculptures and canvases incorporating flags and fabrics, but the new show begins with his first video work in nearly a decade, which is mostly aerial footage of correctional facilities; and some truly horrifying new sculptures, giant skulls with Day-Glo electric-shock wigs. (Haters be damned: “Damnation” is an utterly freaky delight.) There’s no Ruby in the booth at Frieze, but Sprüth Magers placed works by
Jenny Holzer
,
Barbara Kruger
, and
Louise Lawler
, the latter of whom’s wall work flanking the whole booth sold for $175,000.

With works by Claire Tabouret 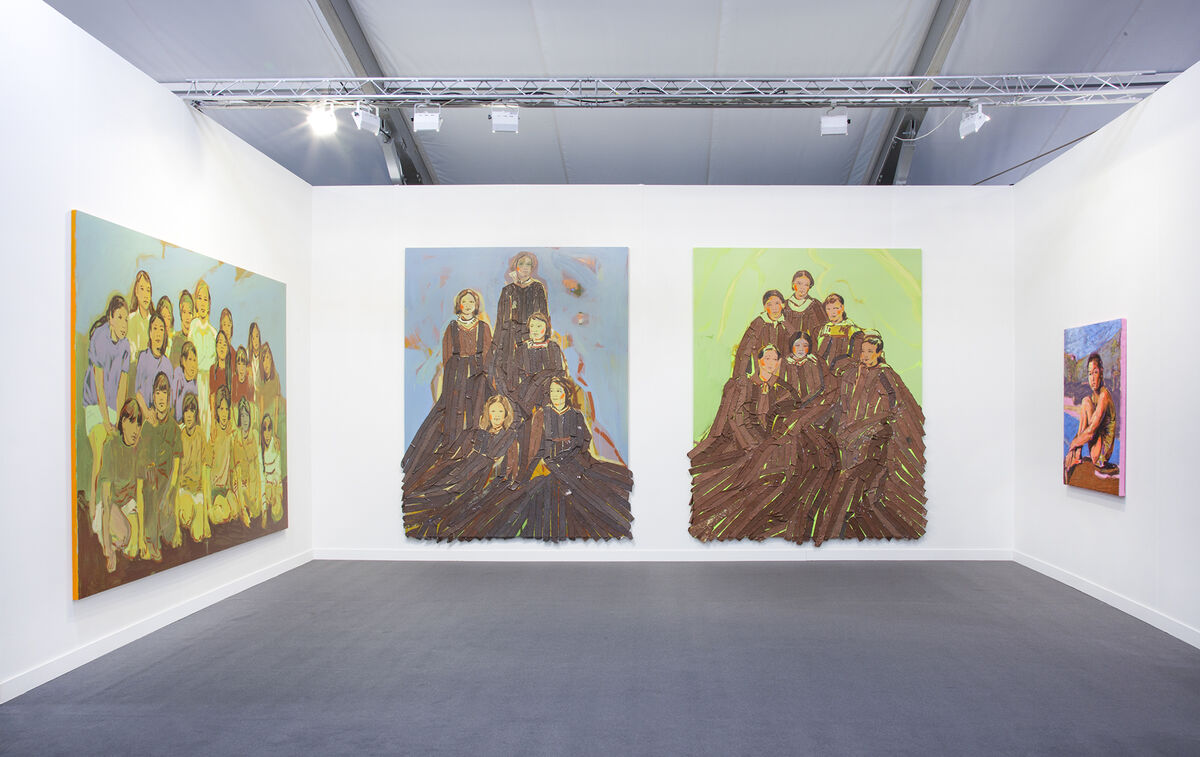 French artist
Claire Tabouret
is known for paintings of naked couples in, um, very Valentine’s Day–appropriate poses, and her work in Perrotin’s Frieze L.A. booth is indeed quite graphic. But the Los Angeles–based artist keeps it PG for her solo booth at Night Gallery, where the large paintings on dyed fabrics depict a group of debutants in a sorority squat pose and a girls’ soccer team ready to play. One portrait was made on a fleece blanket, and gallery sales director William Hathaway said that it was okay for me to touch the side of it. Reader: That painting is soft! Hathaway reported that two of the large-scale works had sold, with the other two on hold. An overheard comment from a collector as I left summed it up: “I don’t care how long I have to wait, I just want one.”

With works by Doug Aitken 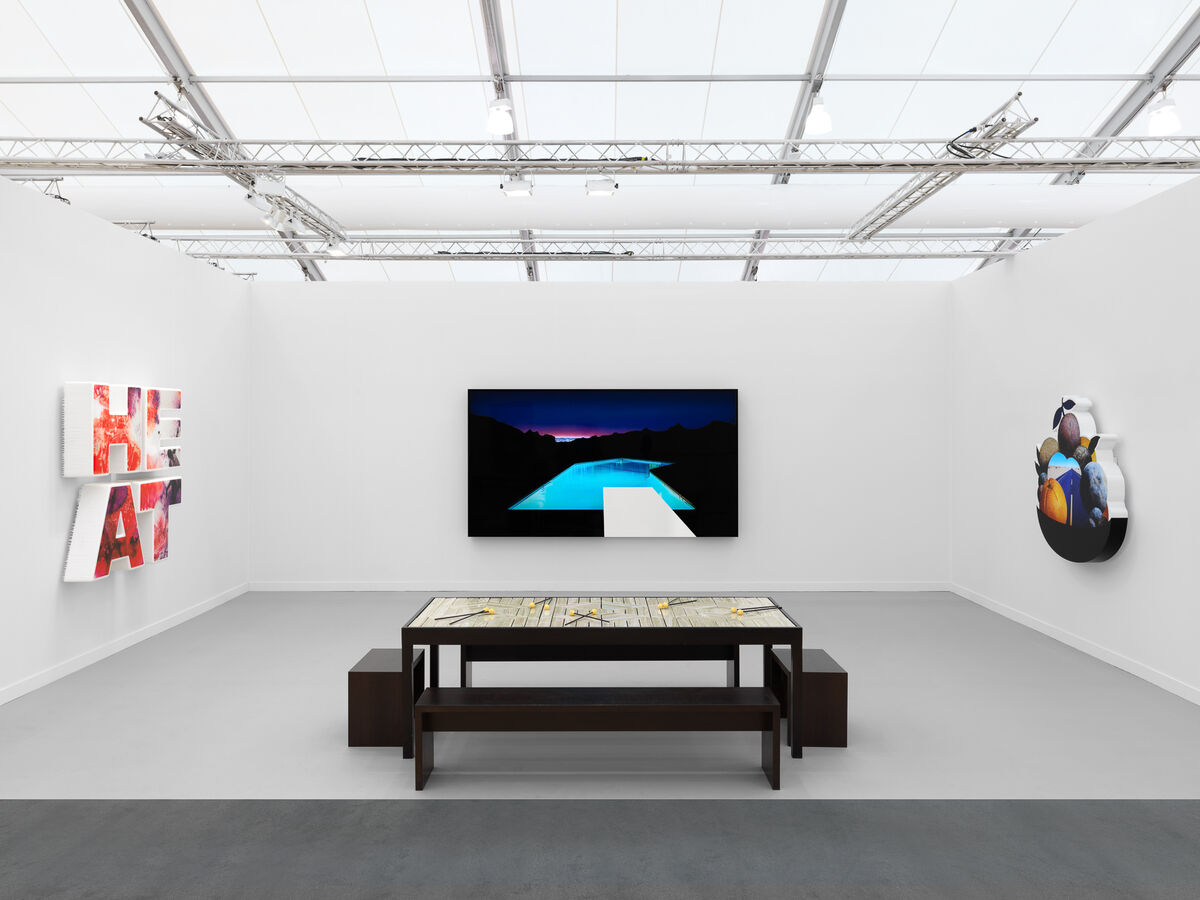 The biggest downside of having rainy, cloudy weather in Los Angeles is that you can’t take a dip in the pool. What’s this city of sun and fun without the cerulean swimming pools so gauzily captured by the likes of
David Hockney
? Thankfully,
Doug Aitken
gave Frieze-goers a glorious view of a pool at 303 Gallery’s booth with a lightbox sculpture called Midnight Sun (distant view with pools) (2019). The backlit effect gave the blue of the pool an otherworldly glow, and it beams bright between the inky black of the sky and the far-away lights of downtown. There’s also Sonic Table (Green Onyx Sound Table) (2011–13), which functions both as a table and a xylophone that viewers are encouraged to play with the provided mallets—Jerry Saltz went all Keith Moon on them and then hurled the mallets to the floor after in a mock-rock-star gesture.

With works by Jeppe Hein 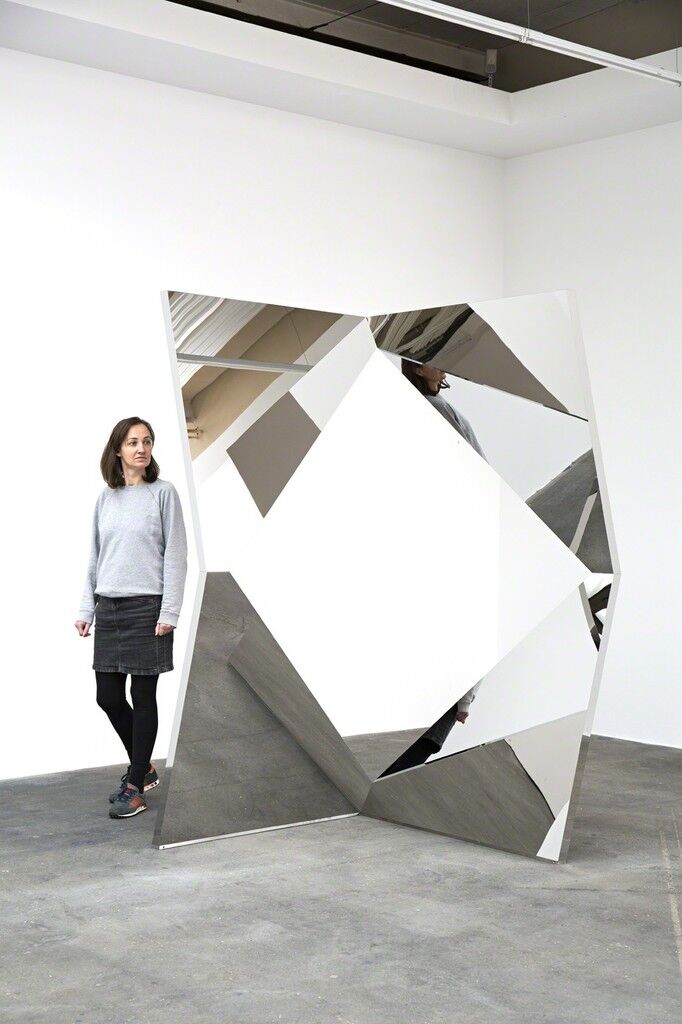 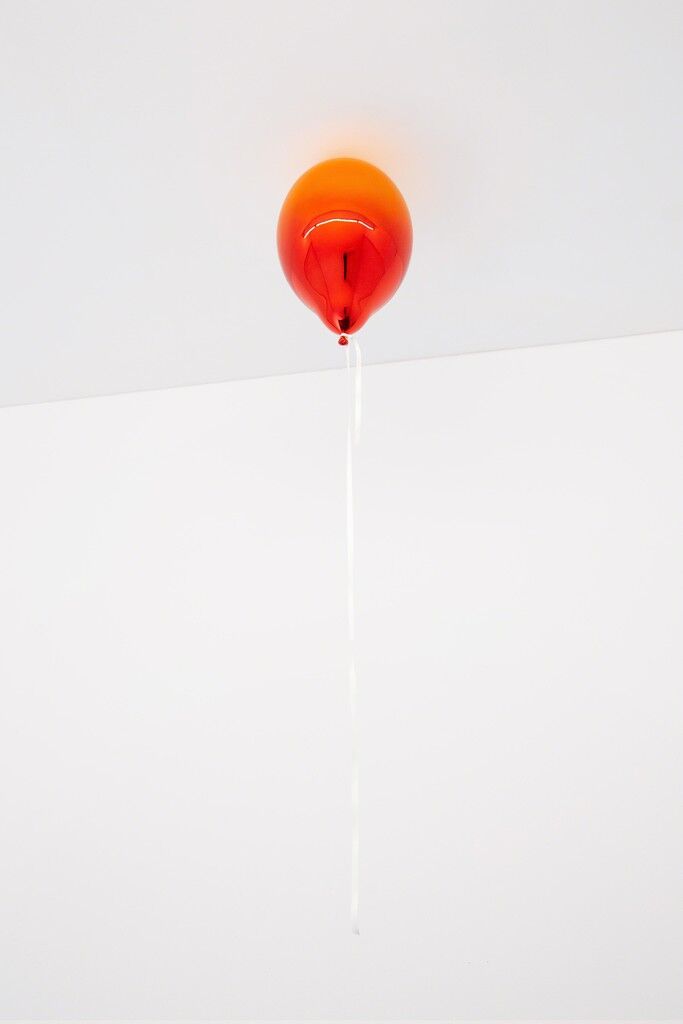 Jeppe Hein
Dark Orange and Dark Red Mirror Balloon, 2019
KÖNIG GALERIE
One art fair trend that was so prevalent in Miami but oddly absent here: the proliferation of dozens of mirror works. Could it be possible that L.A. collectors like looking at themselves less than Miami collectors? Anyway, a hit of mirror art came blissfully in the form of
Jeppe Hein
’s showstopping solo booth at König Galerie, from Berlin. Twisted Geometric Mirrors I (2016) catches reflections from all different angles, and Vertical Cut (2017) places mirror foil on an aluminum frame and slices a cut in the middle of it, à la
Lucio Fontana
. I AM HERE RIGHT NOW (2018) proclaims that very phrase over a mirror, and Light Red and Light Blue Mirror Balloon (2019) is one of the several mirror balloons that hang from the ceiling. At one point in the afternoon, gallery head honcho Johann König sat on one of the few non-reflective works, Modified Social Bench O (2008), and wherever you were looking in the half-circle booth, you could see him.

With works by Sanya Kantarovsky 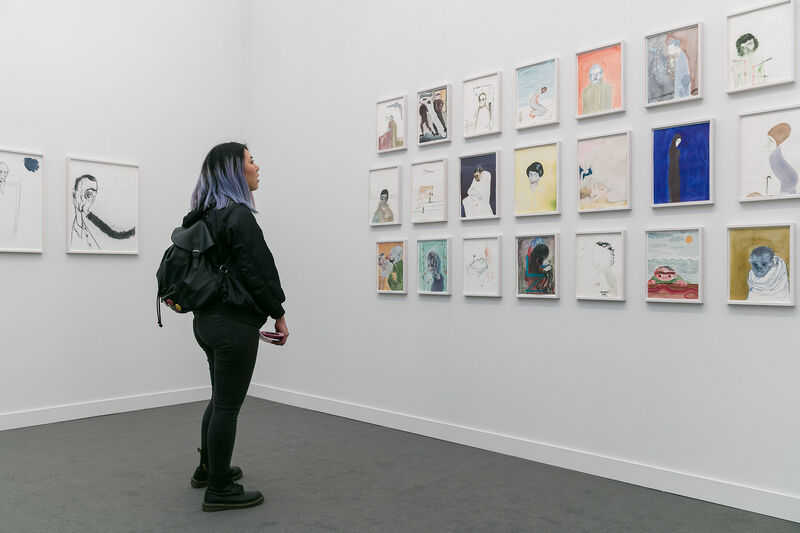 There was very little that was quiet about the opening day of Frieze Los Angeles. The tightened-up exhibitors list left no room for fat, and every gallery brought their A-game to out-shout the gallery next to them. And, hey, when done right, there’s nothing wrong with making a loud gesture. But still, one had to appreciate the booth of a gallery like Modern Art, the London concern run by dealer Stuart Shave that brought lovely, soft-looking watercolors by
Sanya Kantarovsky
. The small works, featuring gaunt blueish figures on the beach or wrapped in blankets, stood out among the loud sculptures that were appearing in everyone’s Instagram stories. And their subtle appeal did not go unnoticed. The booth was sold out in the early hours of the fair, with all 40 works selling for $7,500 each. 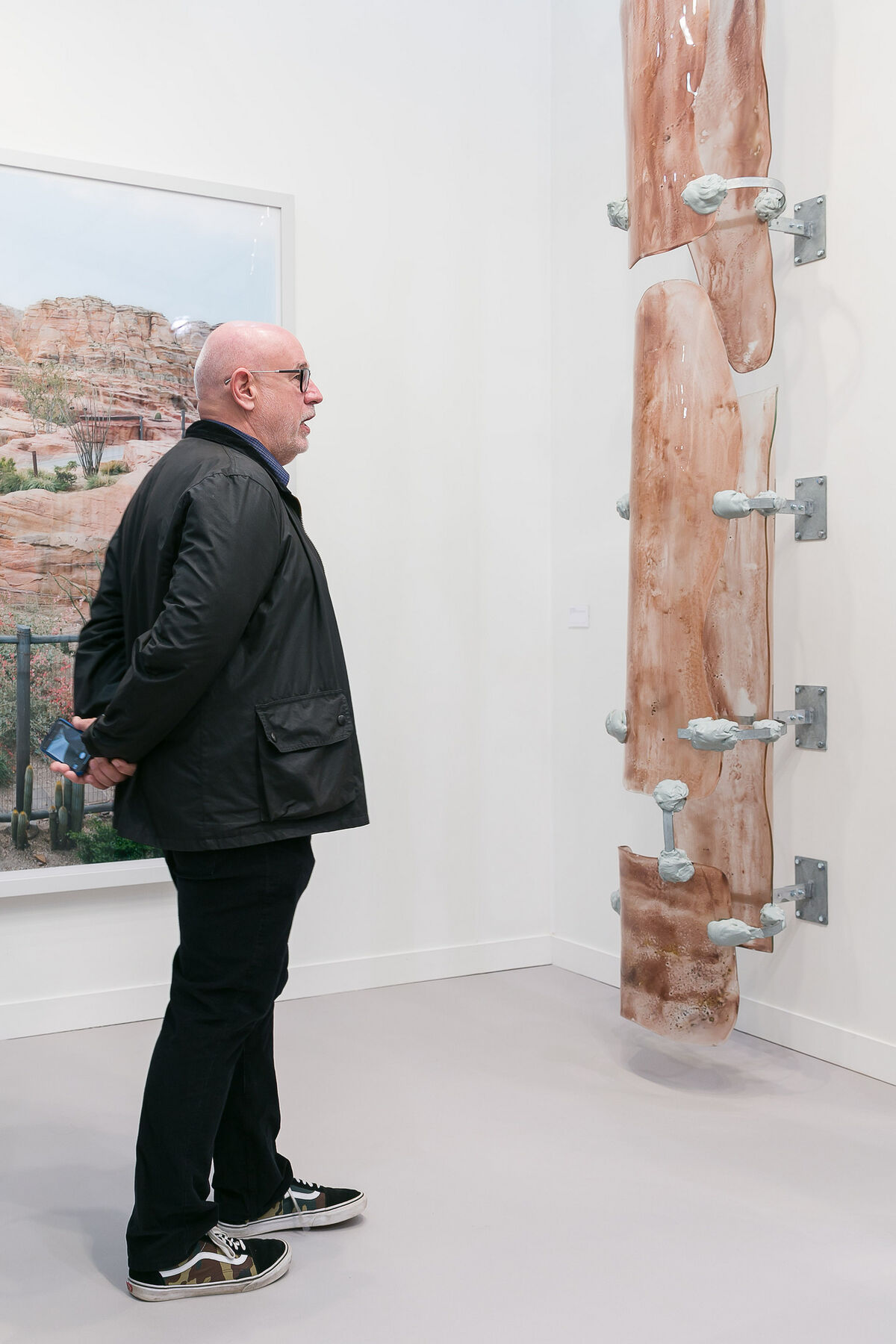 It’s not quite an understatement to say that the art scene in Los Angeles would not exist without
John Baldessari
, the grand bard of the California
Conceptualists
who has taught so many students through his longtime perch as a professor at UCLA—so it was thrilling to see three of his works installed at the Marian Goodman booth. The paintings from Baldessari’s “Hot & Cold” series were installed on top of a gigantic
Lawrence Weiner
wall installation, FLOTSAM + JETSAM & TAR & MOONSTONE, TAR & MOONSTONE & FLOTSAM + JETSAM, MOONSTONE & FLOTSAM + JETSAM & TAR (1992), which wrapped around the entire wall.
While the Baldessari works nod subtly to California,
Thomas Struth
depicts the state literally, with images of a pond and a canyon in Anaheim. And then there’s
Steve McQueen
’s Broken Column (2014), a sculpture of Zimbabwe black granite. It has no direct connection to California, but it makes sense that the only contemporary artist with an Oscar for Best Picture has work in a fair at a movie studio.
Nate Freeman
Related Stories