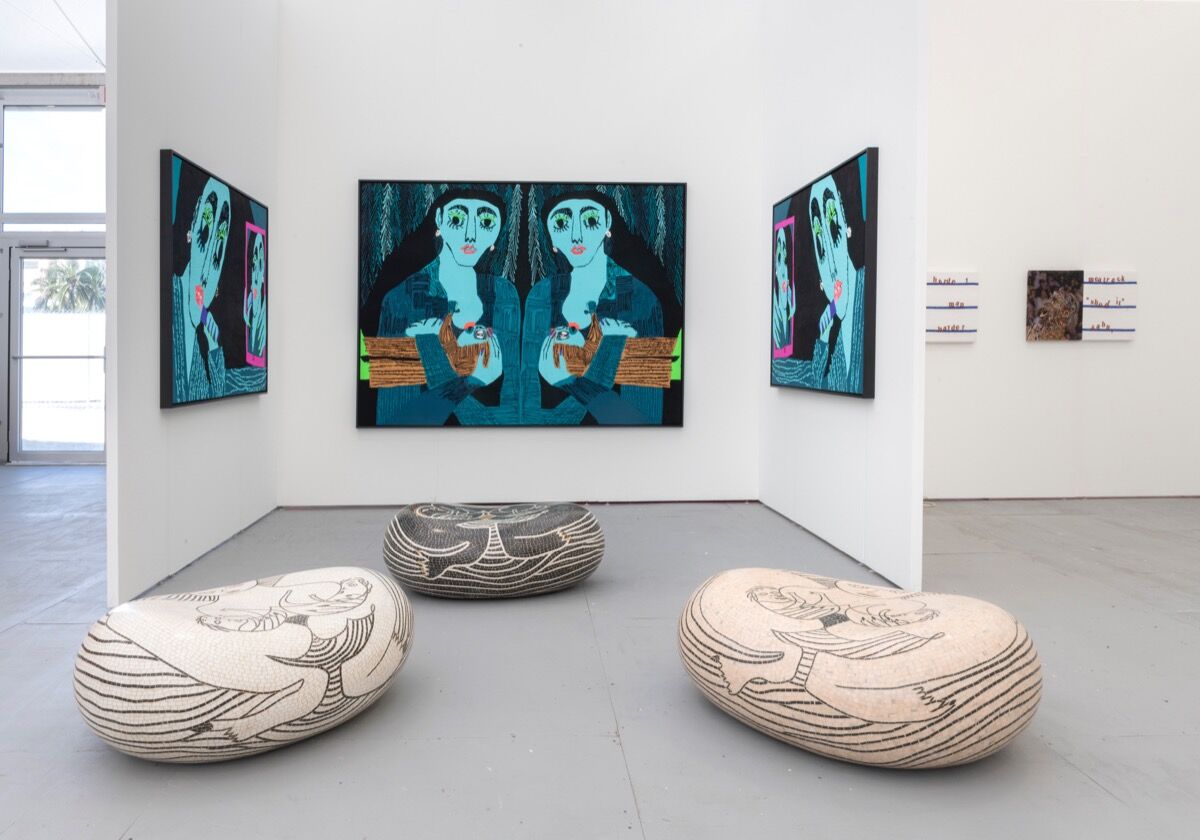 Within the first hours of its VIP preview, the 10th iteration of Untitled Art Miami Beach already had a serpentine line of visitors waiting to enter the fair’s immense white tent. After forgoing an in-person event in favor of online viewing rooms last year due to COVID-19, Untitled Art is now back in full force. With more than 145 participating galleries from around the world, this year’s fair marks the biggest and most ambitious edition yet.
Inside, as booths bustled with attendees and numerous gallerists spoke about how much they had missed the energy of the fair, the ongoing pandemic seemed almost like a thing of the past. To celebrate its 10th edition, this year, Untitled Art expanded its curatorial platform by inviting four guest curators—Natasha Becker, Miguel A. López, Estrellita Brodsky, and José Falconi—who all contributed in creating a diverse and global conversation about contemporary art. Below are 10 exceptional booths from Untitled Art Miami Beach’s 2021 edition. 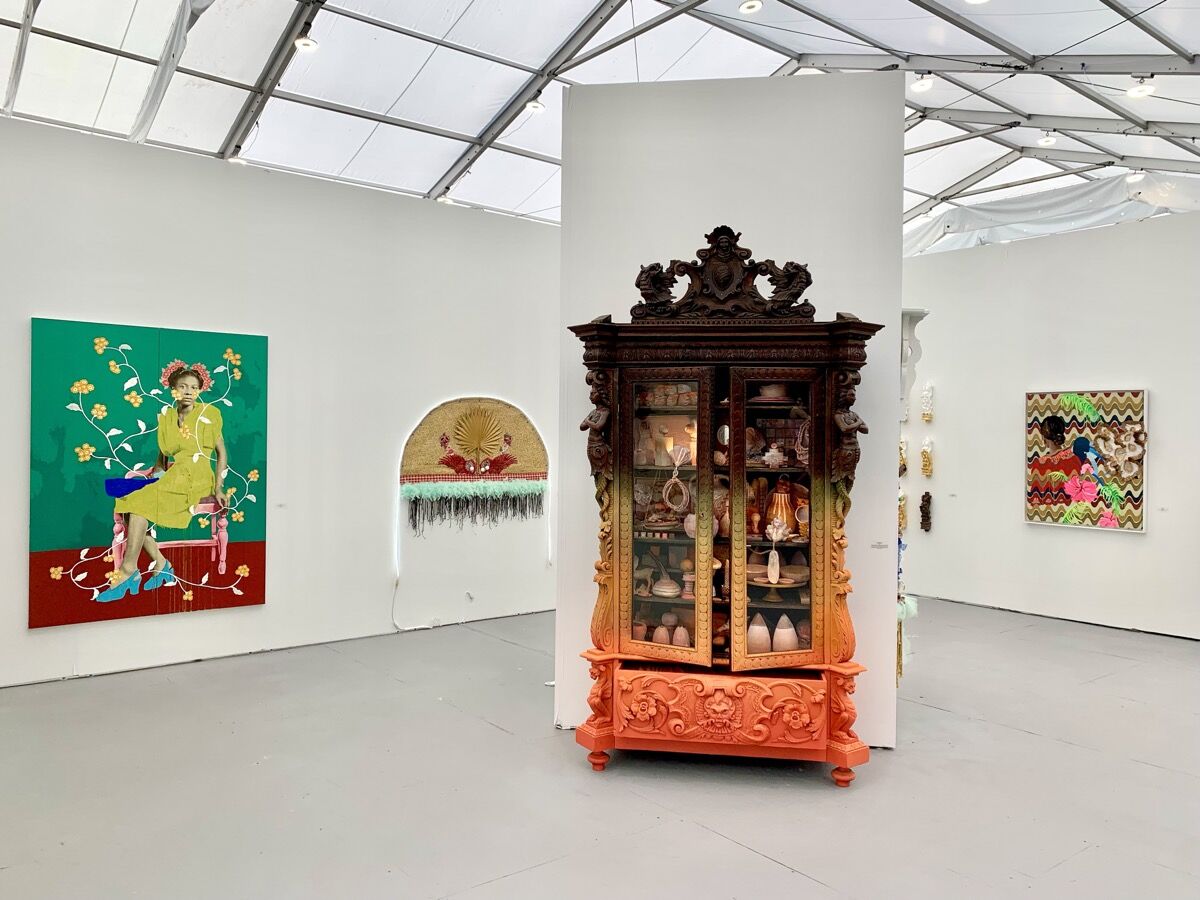 Suchitra Mattai
is a young artist of Indo-Caribbean descent who utilizes mixed media to excavate memory and reimagine colonial narratives. Sweet Surrender (2021), a standout work at K Contemporary’s booth, is composed of elements such as vintage saris, a bed frame, and hair rollers. “It’s really about surrendering to one’s history, to one’s past, and to one’s family memories,” Mattai said of the work. Referencing her use of female figures and the domestic found objects in her pieces, the artist added, “I specifically want to give agency to women whose voices aren’t always heard.” 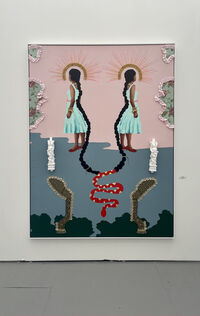 K Contemporary
View Slideshow
4 Images
Advertisement
Another remarkable work on view at K Contemporary’s booth is
Ken Gun Min
’s Xenophobia (2020), a canvas depicting a dissected frog embellished with glass beads and crystals. The work is a favorite of the gallery’s founder and director, Doug Kacena. “The frogs have a beautiful grotesqueness that seduces you into harder conversations,” he said. By the end of the first day, Min’s piece had sold for a price between $13,000 and $20,000, along with two of Mattai’s paintings, each priced between $2,500 and $6,000. 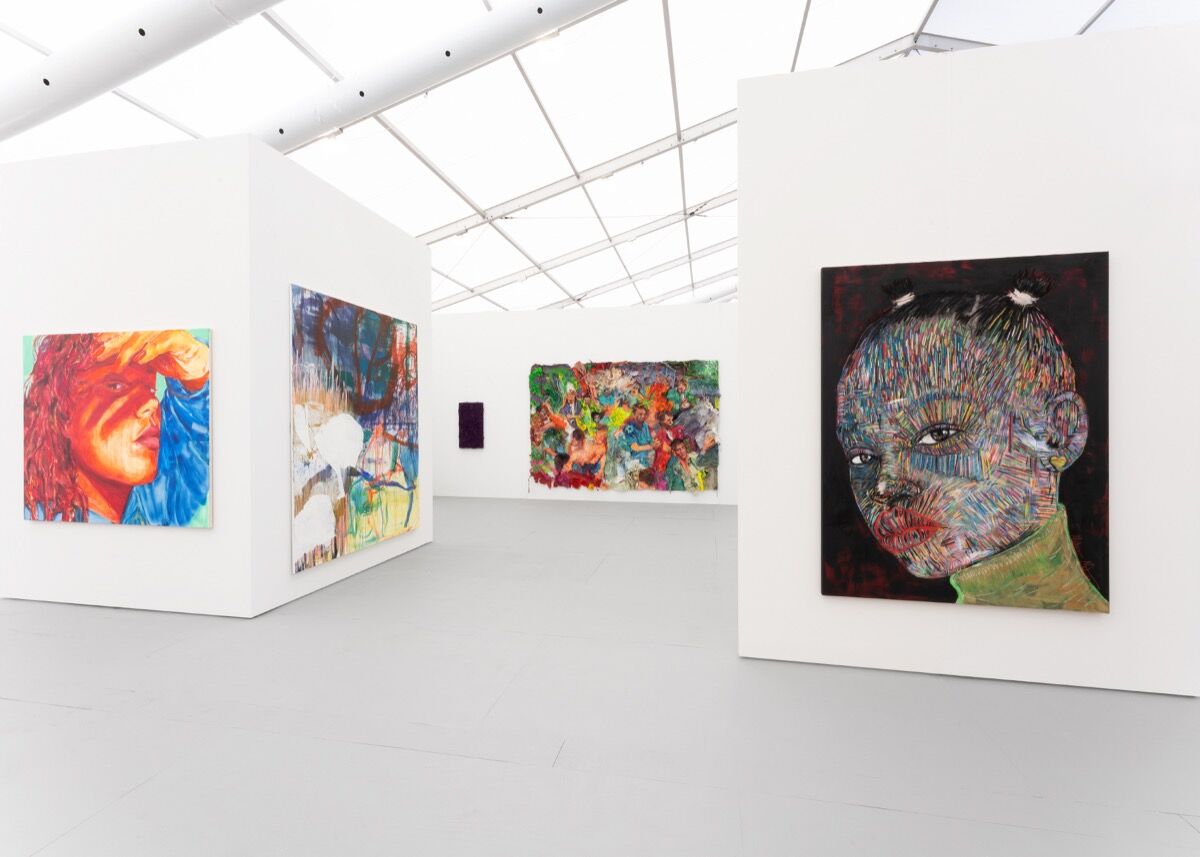 Numerous three-dimensional pieces stand out within the large group of artworks presented by Makasiini Contemporary. In particular, Crowd (2019–21), a timely and never-before-seen piece by Argentine artist
Fabian Marcaccio
, received great praise during the first day of the fair. “This piece was very much influenced by the 2019 riots in the U.S.,” explained the gallery’s founder and director, Frej Forsblom. “Now we’re showing it during a pandemic, and the title is Crowd, so it’s a great moment to reveal it.” 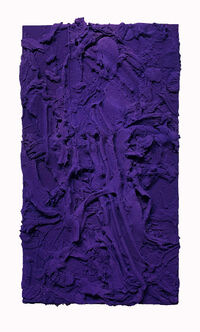 Makasiini Contemporary
View Slideshow
4 Images
Next to Marcaccio’s flamboyant work, renowned British artist
Jason Martin
’s monochrome piece Cobalt (2021) looks particularly striking. By extension, the dark violet tones of Martin’s piece are complemented by elements present in
Jacob Hashimoto
’s nearby sculpture On the Wings of Some Dubious Aesthetic Principle (and Close to the End of Things) (2021), which, by the first day of the fair, had sold for $60,000. 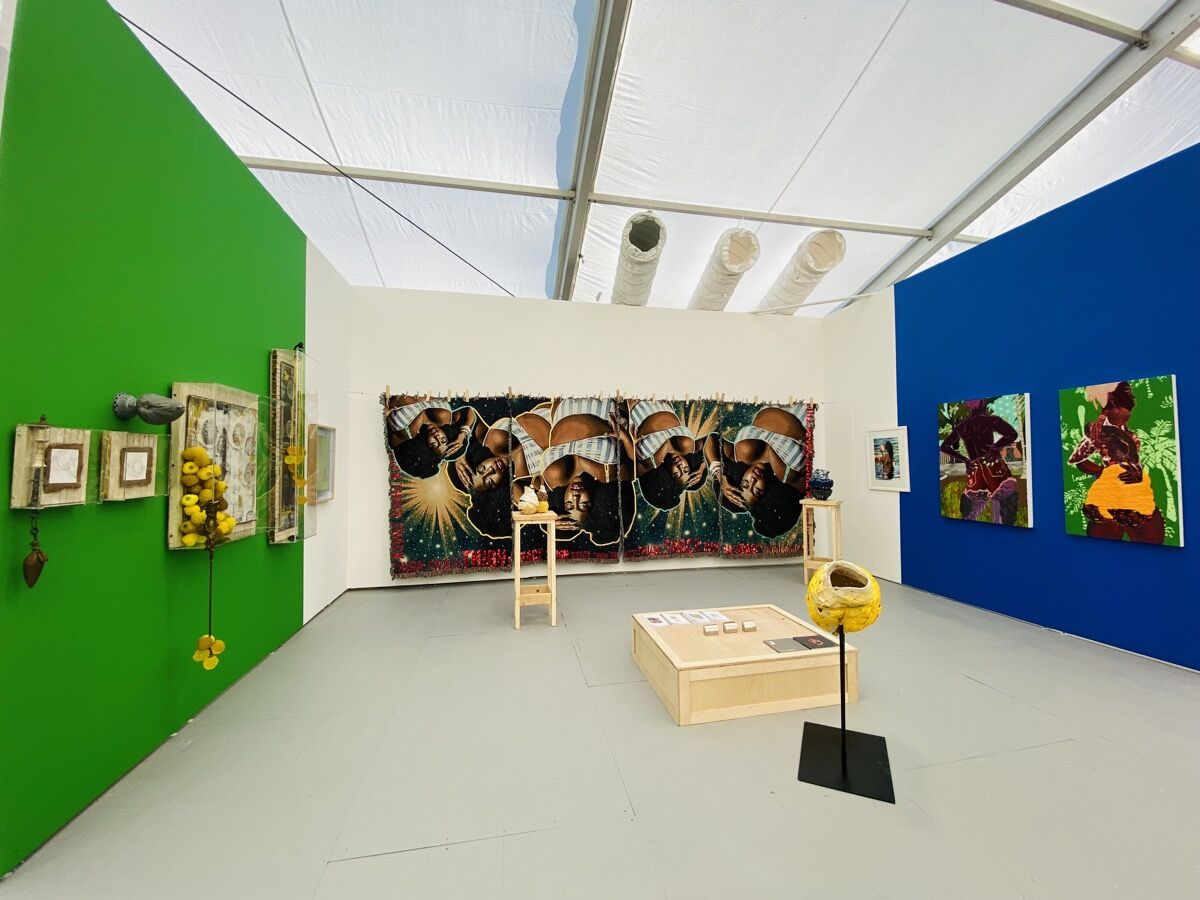 A grand woven blanket with hand-sewn sequins and glitter featuring the repeated image of a Black woman in a striped bathing suit is the show-stopping piece at TERN Gallery’s booth. Titled What You Tryna Say, What You Tryna Say, Raise Your Phucking Voice, I Can Not Hear What You Say (2021) by Bahamian American artist
April Bey
, the sensational work has an undeniable draw. 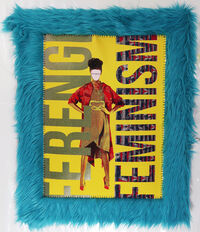 TERN Gallery
View Slideshow
4 Images
“We wanted to show a more punk-rock facet of what Caribbean art is,” gallery manager Jodi Minnis said of the works featured in the show. The gallery’s presentation showcases cutting-edge pieces by Black Bahamian women artists. “Bahamian art history is very patriarchal and male-centered,” Minnis continued. “We think it’s important to highlight and support women artists doing the work, to uplift them and insert them into the canon.” About a third of the available pieces (ranging from $2,500 to $25,000) sold within the first few hours of the fair. 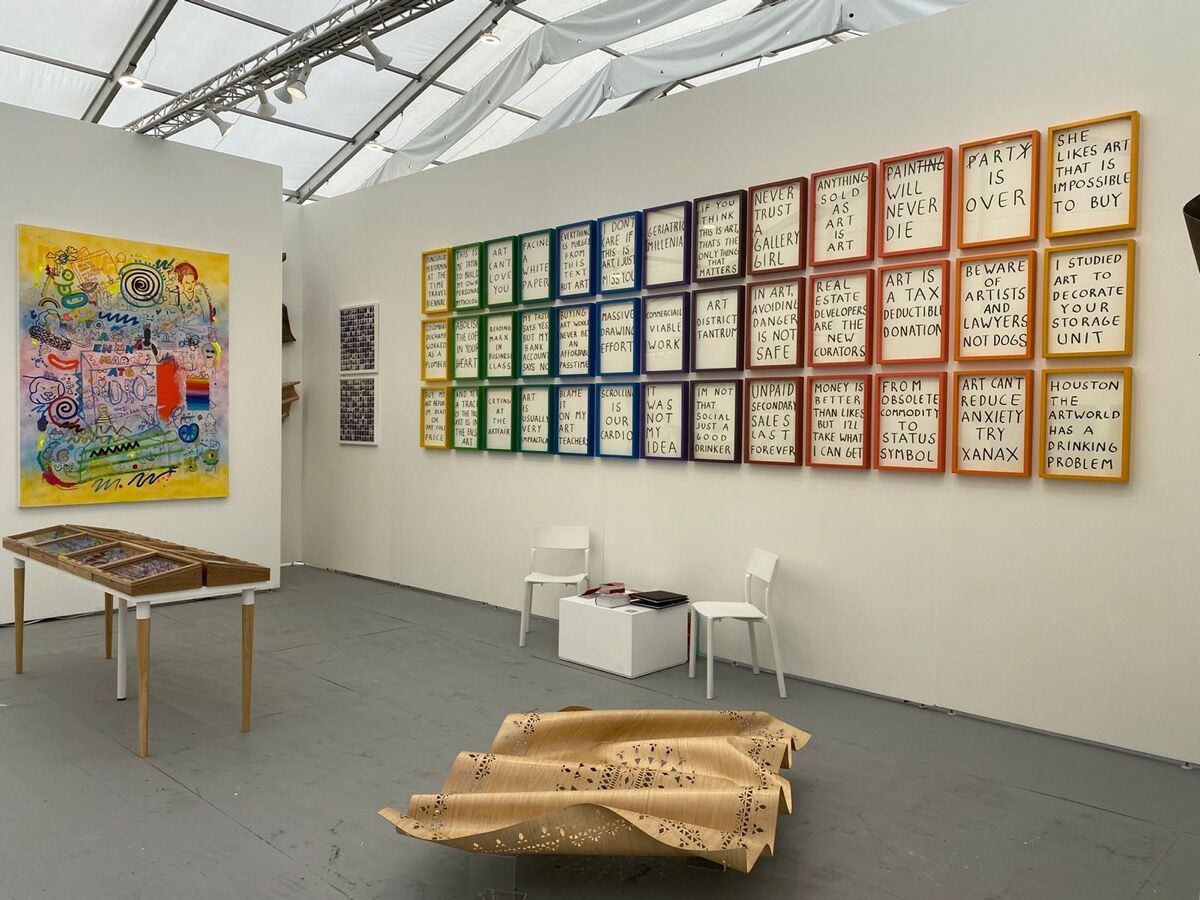 For more than two decades, Colombian artist
Juan Pablo Echeverrí
has taken a passport photo every single day for his series “Miss fotojapon” (1998–2021). These photographs are featured at SGR Galería’s booth in a staggering display of 3,749 meticulously arranged portraits glued directly onto the booth’s wall. “The series registers an ongoing performance that surveys why and how we use images to build our identity,” said gallery founder Steven Guberek. 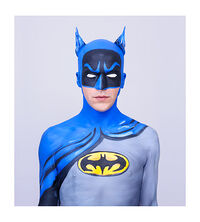 SGR Galería
View Slideshow
4 Images
Another standout series within the gallery’s unique selection of works by Latin American artists is
Juan Uribe
’s “Losing My Edge” (2021). The humorous meme-like series of art-related phrases like “Crying at the art fair” and “Buy my art before I’m dead or pay full price” have been a big tongue-in-cheek hit with fairgoers. “It has definitely been one of the highlight Instagrammable pieces in the fair,” said Guberek. 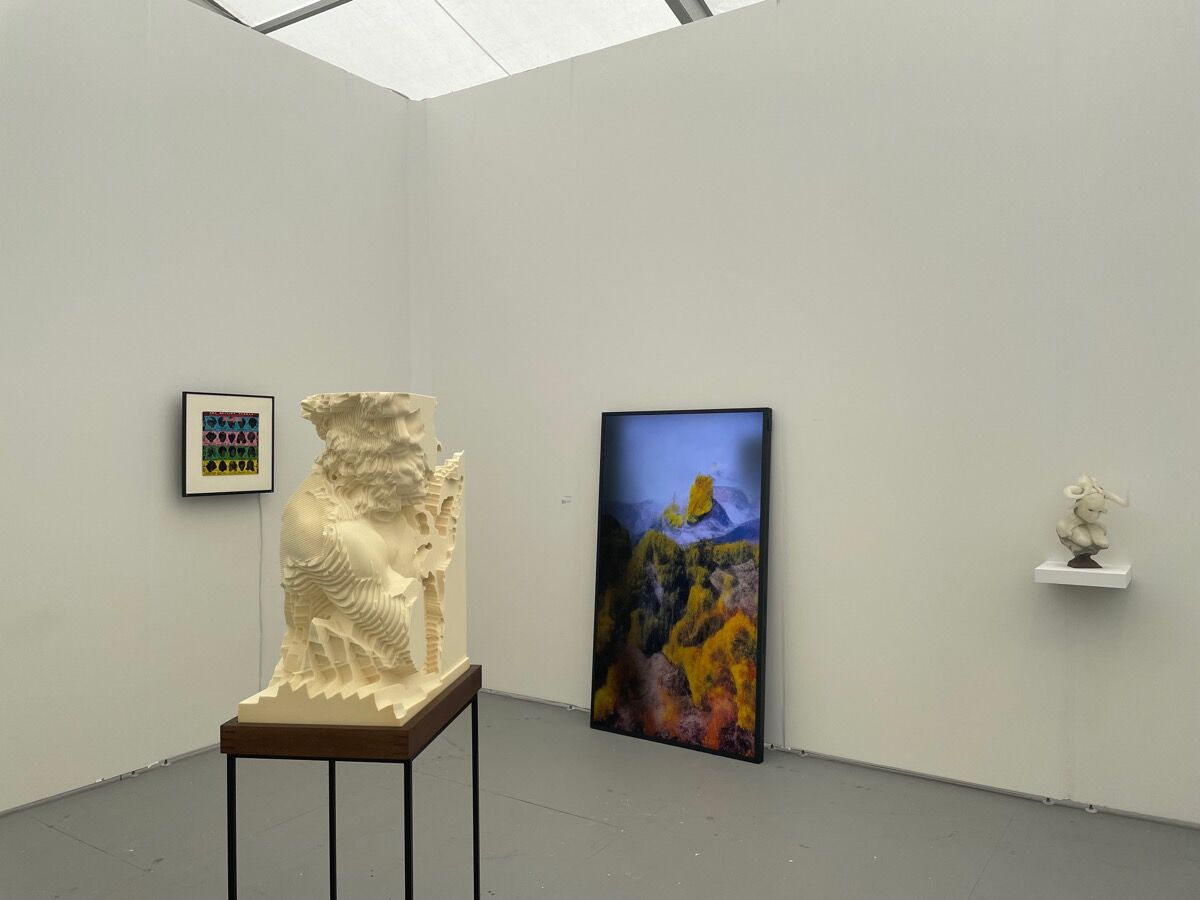 Crowds were a mainstay at bitforms gallery’s booth, with many stopping by to interact with
Daniel Rozin
’s CMY Shadows Mirror (2021), a large, circular, software-driven piece composed of 1,555 colored acrylic paddles that move in sync to mirror the viewer’s movements and to display random animations. 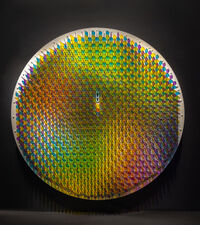 bitforms gallery
View Slideshow
4 Images
Bitforms—which, since 2001, has specialized in representing artists who critically engage with new technologies—fittingly showcases a range of experimental works in its presentation. Among them are kinetic sculptures by
Björn Schülke
;
Clement Valla
’s gardens; and
Claudia Hart
’s hybridized NFT paintings known as “digital combines.” In fact, many of the works available at bitform’s booth are sold as both physical and NFT versions. “We view NFTs as an advanced certification, as the most current way to certify a digital work,” explained owner and director Steven Sacks. 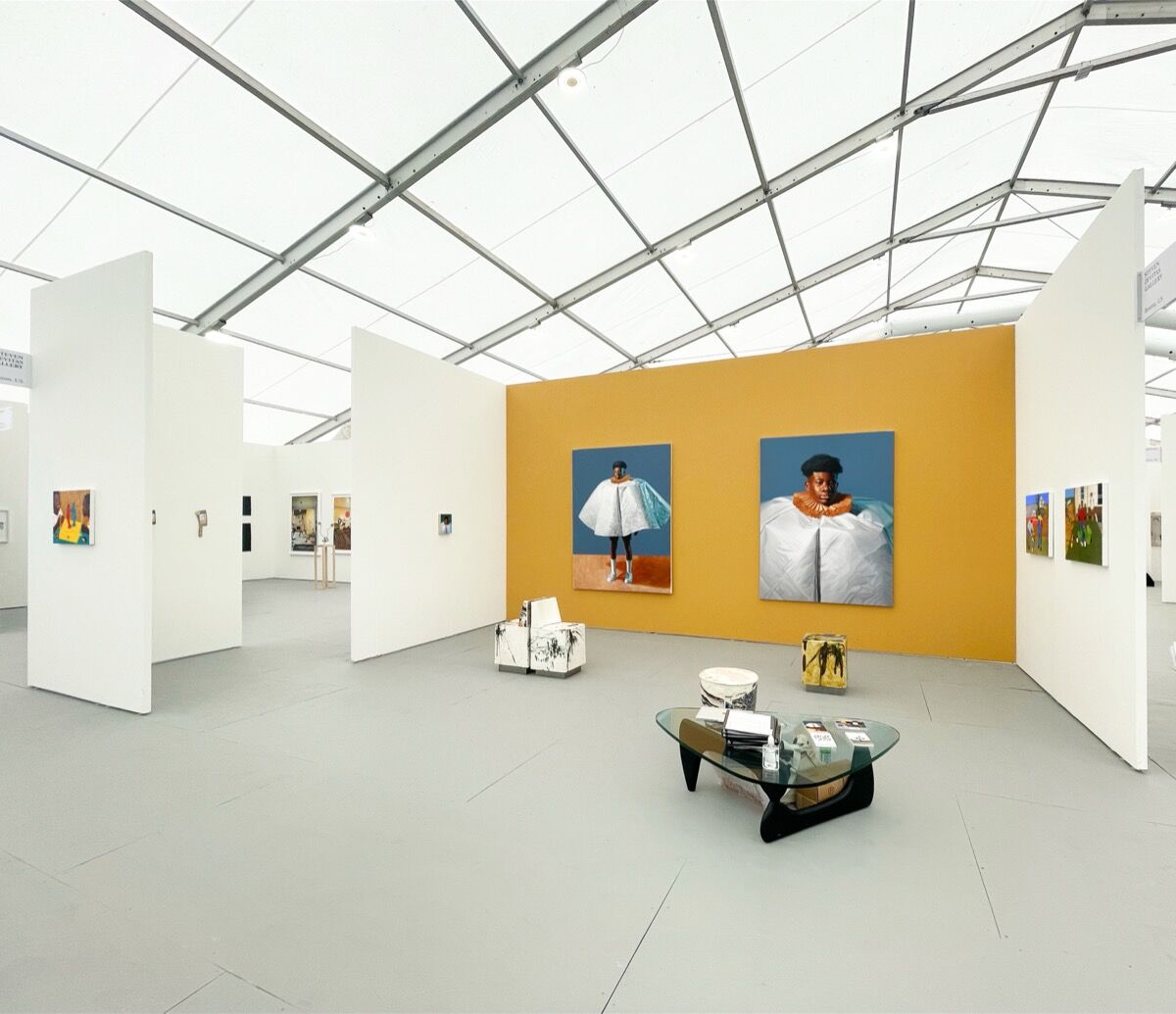 Anastasiya Tarasenko
’s series of peach-colored humans on blue and green landscapes painted directly on meat cleavers made many heads turn at Steven Zevitas’s booth. Titled “Reliquary of Utility,” the series was made using 14 vintage meat cleavers sourced by the artist. “Tarasenko surveys the duality of human nature,” said the gallery’s associate director, Liz Morlock. “She paints grotesque and debaucherous, but nonetheless intimate moments. She’s interested in surveying ideas of flesh, body, the physiological, and the theoretical.” 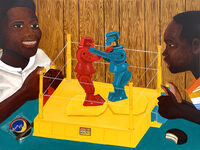 Steven Zevitas Gallery
View Slideshow
3 Images
In addition, two paintings by Guinea–born artist
Papay Solomon
, Tarp Baby and Tarp Baby with Nike Shoes and Long White Socks (both 2021), also drew a great deal of attention. The artist, who was present at the fair, said the autobiographical works emphasize a sense of displacement, and are greatly inspired by his experience growing up in a refugee camp. “The child in the painting is my nephew who is currently 14,” Solomon said. “I wanted to put him in a position where he could see himself in art. Hopefully that makes his journey easier than mine.” 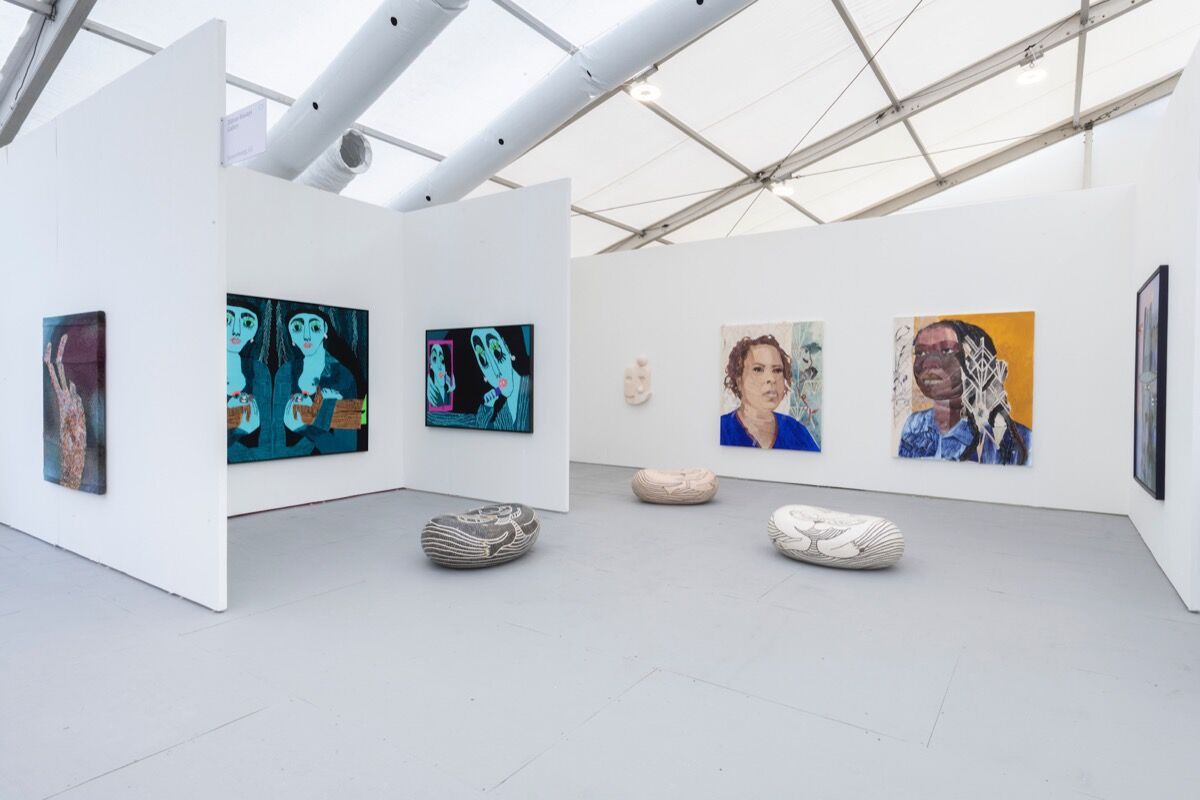 Known for its focus on emerging African American artists, Zidoun-Bossuyt presents a selection of works in which rich, diverse textures emerge as a defining element at this year’s fair. For instance,
Jeff Sonhouse
’s The Spirit of a Hypocrite (2008) is a vibrant eye-catching portrait of a Black man with neon yellow painted matches in lieu of hair. 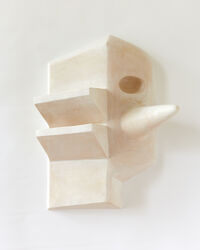 With works by Sarah Meyohas 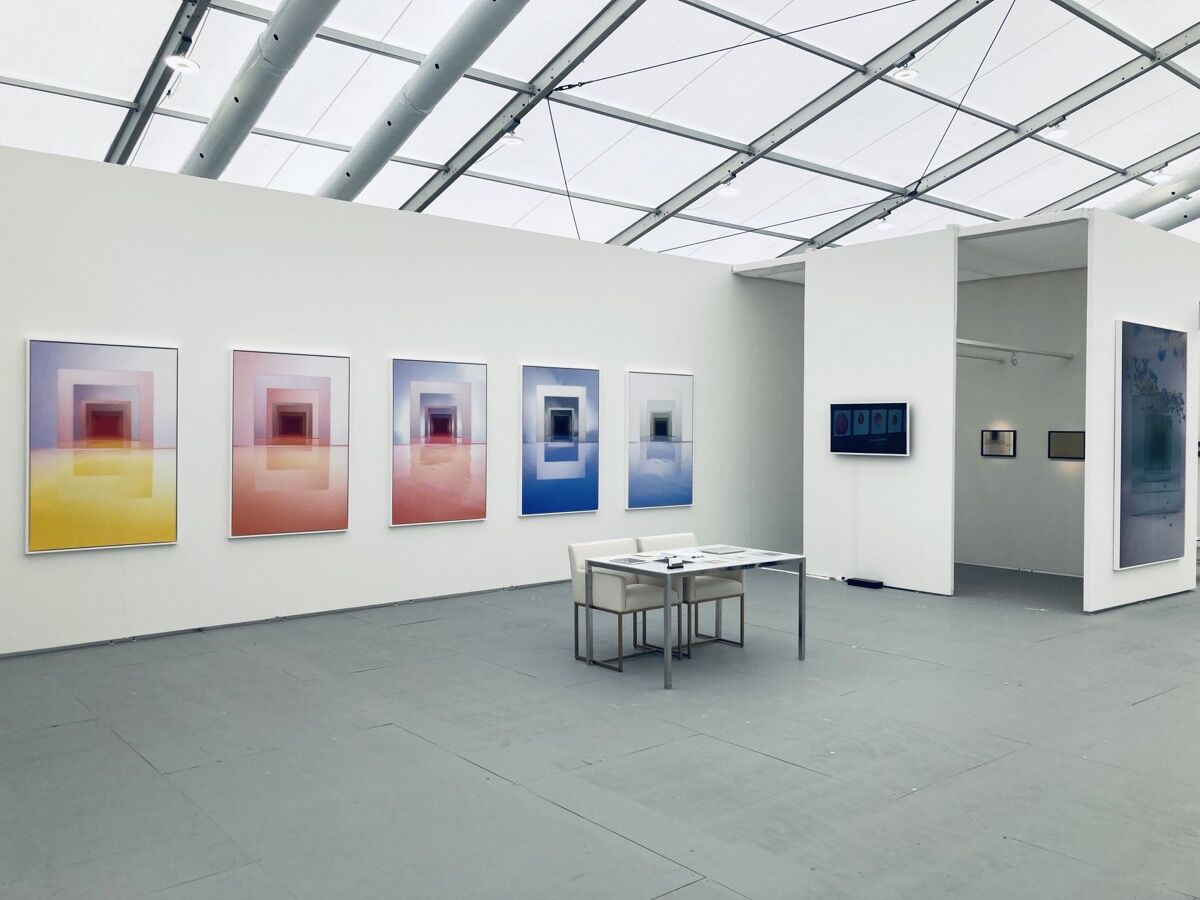 While most booths at this year’s Untitled Art Miami Beach feature a selection of works by multiple artists, COUNTY has opted for a solo presentation of renowned conceptual artist
Sarah Meyohas
. Back in 2015, the French American artist made headlines with her cryptocurrency performance “Bitchcoin,” which was minted months before Etherium came into existence. In 2017, she was included in Forbes magazine’s “30 Under 30” list. At COUNTY’s booth, Meyohas’s works continue the artist’s reflections on the nature and the possibilities of emerging technologies in contemporary society.

COUNTY
View Slideshow
4 Images
In addition to mesmerizing new hologram pieces by the artist, most of the works featured in the presentation are part of Mehoya’s enthralling “Speculation” series, including Liquid Speculation 5 and Blue and White Speculation (both 2021). “Even though she’s at the forefront in new mediums, her ‘Speculation’ works are created using a very traditional method: a hidden camera and two-way mirrors,” explained gallerist Dalton Freed. Close to half of the available works, priced between $20,000 and $30,000, had sold by the end of the day. 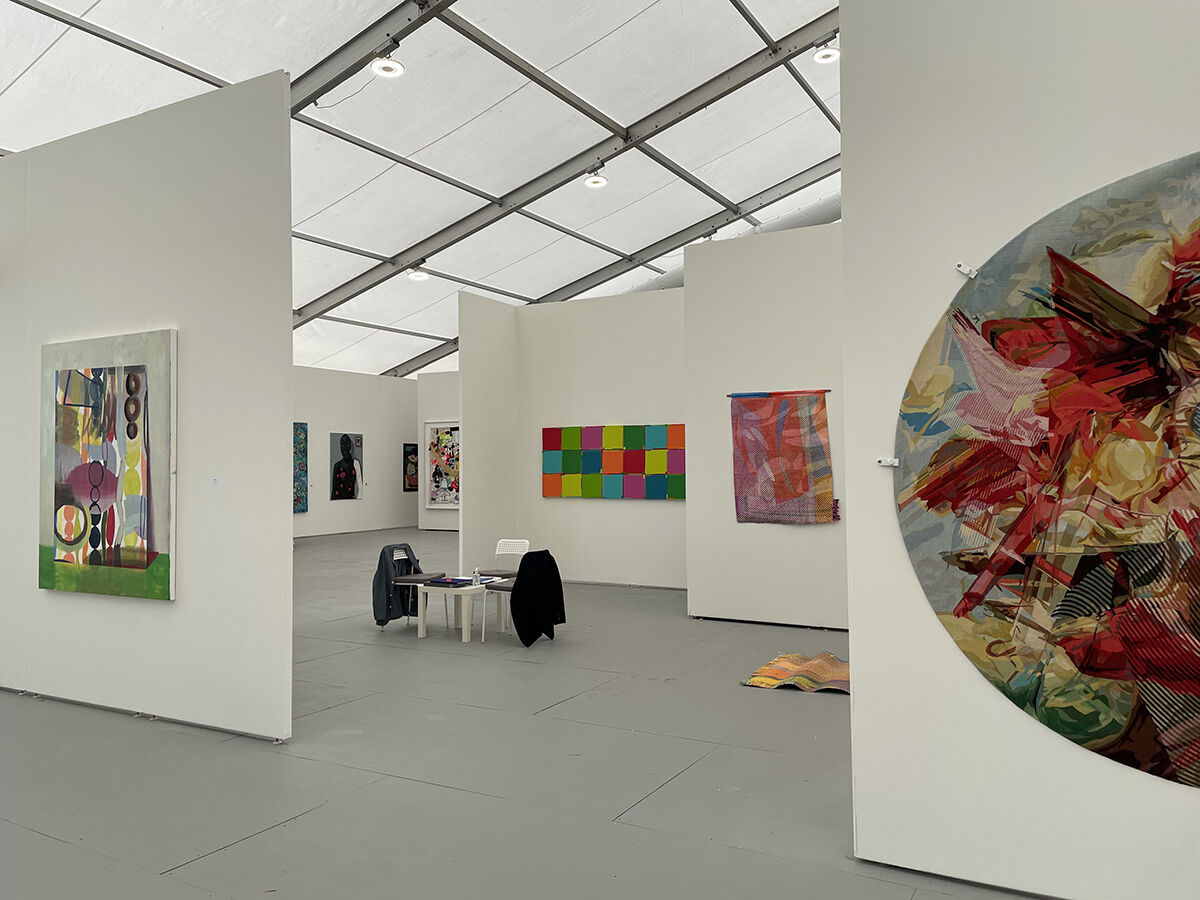 As a part of the collective experimental exhibition platform “no place,” Arróniz Arte Contemporáneo, NF/NIEVES FERNÁNDEZ, and Nueveochenta joined forces to present a selection of works by Latin American artists at this year’s fair. The works on view explore abstraction through the use of handmade elements and traditional materials such as paper, tapestry, and concrete. 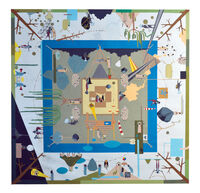 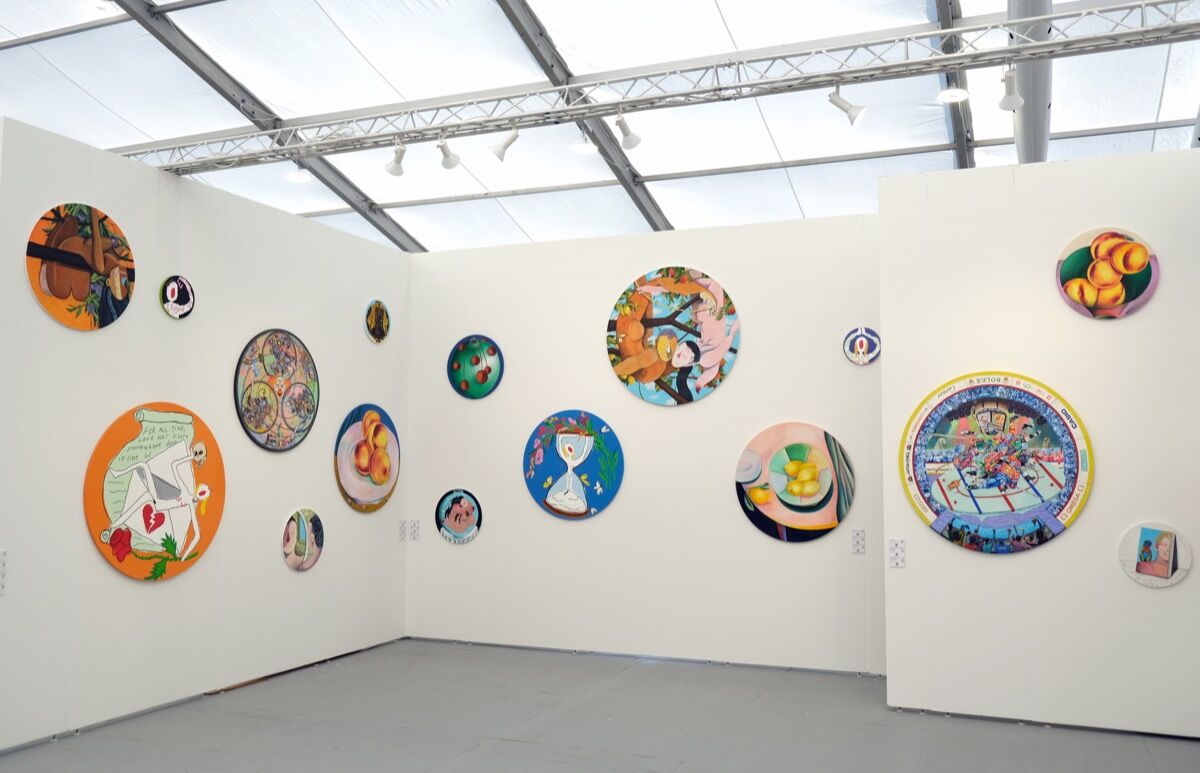 Composed solely of tondo paintings commissioned specifically for this presentation, Dio Horia Gallery’s booth stands out from the crowd. Despite the fact that the four artists featured each have their own very distinct styles, by sticking to a specific format, the gallery’s presentation was able to make all of the works on view feel connected. 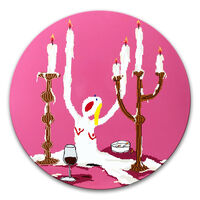 Dio Horia Gallery
View Slideshow
4 Images
“None of the artists had worked on circular canvases before,” mentioned gallery founder and director Marina Vranopoulou. On the occasion of the fair, the gallery requested them all to create tondo paintings that would specifically “study human connection, how we treat each other, how we treat ourselves, and how we treat our planet,” Vranopoulou explained. The results are diverse interpretations of these subjects, ranging from
Pablo Benzo
’s still-life Walking in the fog and
Maja Djordjevic
’s melting female figurines in Light candles after me as if I was not there (both 2021). Within the opening hours of the fair’s VIP preview, half of the booth’s works (ranging from $2,600 to $11,050) had already sold.
Salomé Gómez-Upegui
Related Stories

Why Artists Are Turning to Tondo Paintings

The Market Is Sarah Meyohas’s Medium—But Is There a Message?
Advertisement
Further reading in Art Market 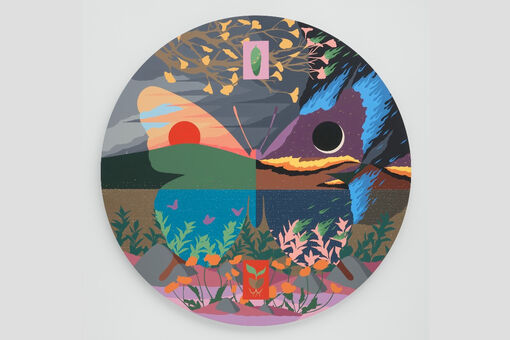 Why Artists Are Turning to Tondo Paintings
Rahel Aima
Nov 11, 2021 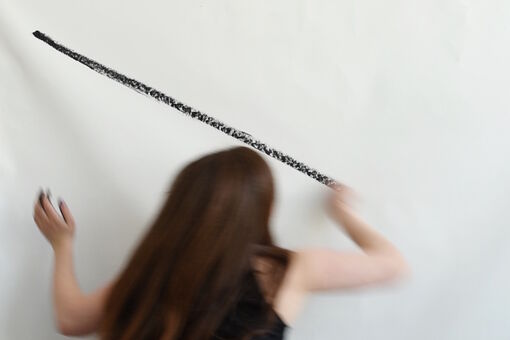 The Market Is Sarah Meyohas’s Medium—But Is There a Message?
Isaac Kaplan
Jan 11, 2016