The 10 Best Booths at ZsONA MACO

Molly Gottschalk
Feb 9, 2017 4:52pm
The 14th edition of ZsONA MACO is well underway. While it’s seen steady momentum over recent years, this year’s quality of presentations and notable newcomers suggest that the art world is even further engaged in the Mexico City fair. As some 120 galleries spread across a single floor of the city’s Centro Citibanamex, Sean Kelly and Lévy Gorvy set up booths here for the first time, and across the fair, presentations were filled with fresh and often timely, political work—in some cases in celebration of artists who’ve made activism their practice for decades. Issues that surfaced included immigration, violence, Trump, gender equality, and political history. As we’ve seen in recent years, local Mexico City galleries have put forth some of the fair’s strongest curated presentations. Below, we bring you the fair’s 10 strongest booths, presented by galleries from Mexico City to Stockholm. 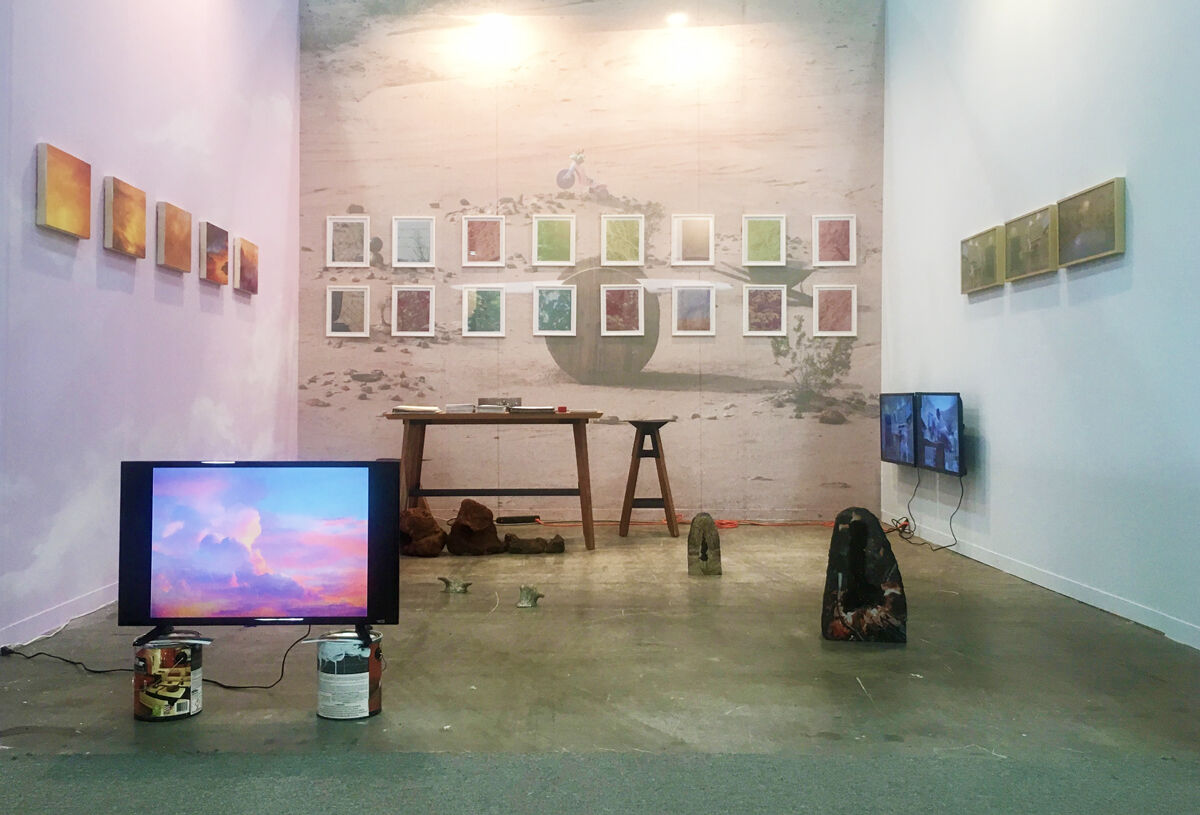 Mexico City’s Anonymous presents a booth emanating dreamy, ambient sounds and painted like the desert sunset, which brings together depictions of nature in various forms by two artists and a collective—Peter Sutherland, Brendan Lynch, and choreography and performance duo FlucT. The booth’s back wall sees Sutherland’s giant photograph of a found assemblage—a tricycle emerges from the California desert sand near a stray wheelbarrow and a surfboard—on which 16 smaller works have been hung. (The surfboard is somewhat autobiographical for Sutherland; surfing has been a large part of his life the past five years.) Like much of Sutherland’s work, the images straddle high and low; lush photographs of landscapes and textures taken across the western United States (foliage, barbed wire) are layered with inexpensive vinyl material. Across the booth, all works are priced below $5,000. 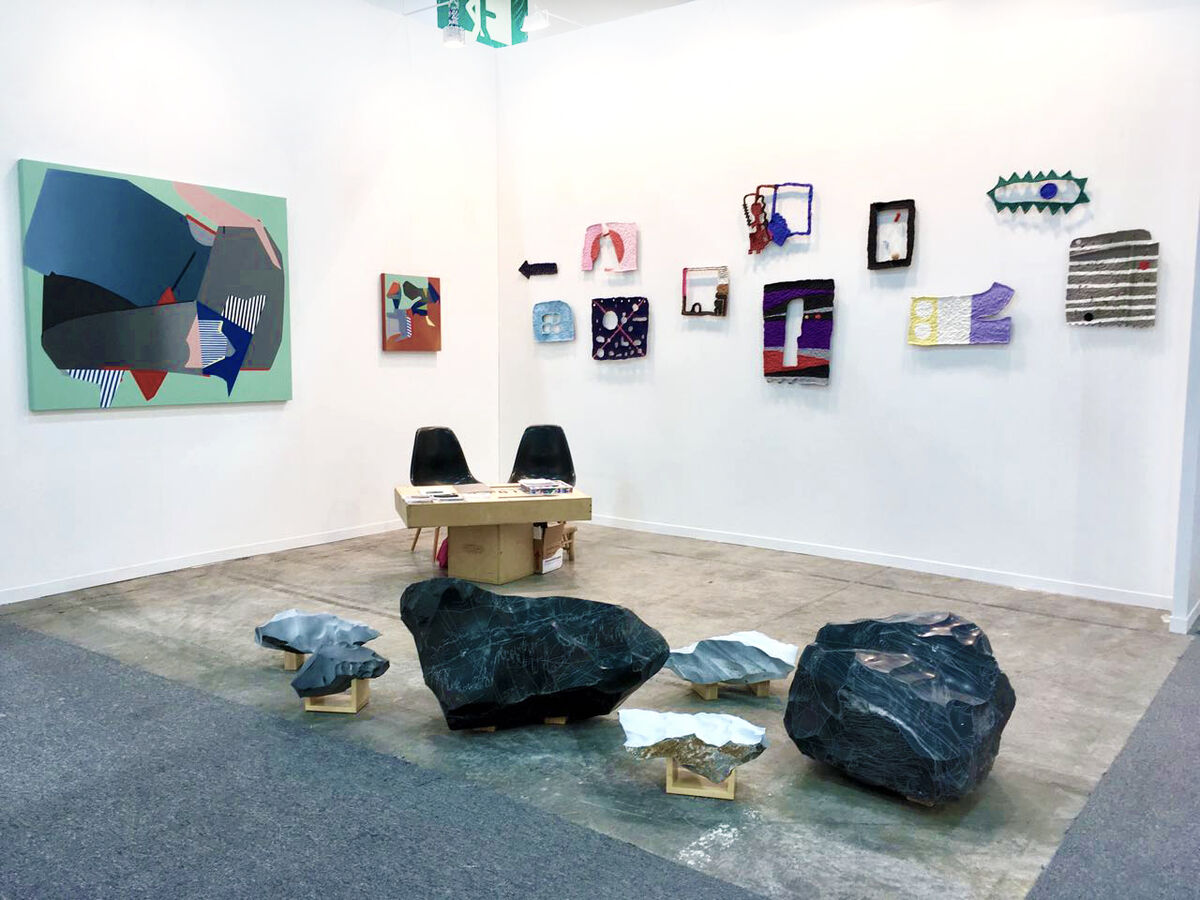 Advertisement
This stellar all-female presentation of Latin American artists is a powerful bid for equality in the art world. Gallery director Domitila Bedel notes that although the gallery applied with the women-only booth months ago, “with all that is happening in the world, the violence to women in Mexico, and the Women’s March,” the message is ever more timely. The booth presents engraved rock sculptures by Mexican artist
Paula Cortazar
($4,000 apiece), two paintings by Panama-born artist Ana Elena Garuz ($2,500 and $7,000), and its highlight, a wall peppered with 11 playful paper mâché and gouache sculptures by Argentine artist Sol Pipkin (sold as a set for $5,500 or in smaller groups of two and three). “For me, being a female director of a gallery, it’s important to take a stand about how important equality is in the art world, and to work towards making it better for female artists to be seen and to have the same prices as men,” Bedel continues. 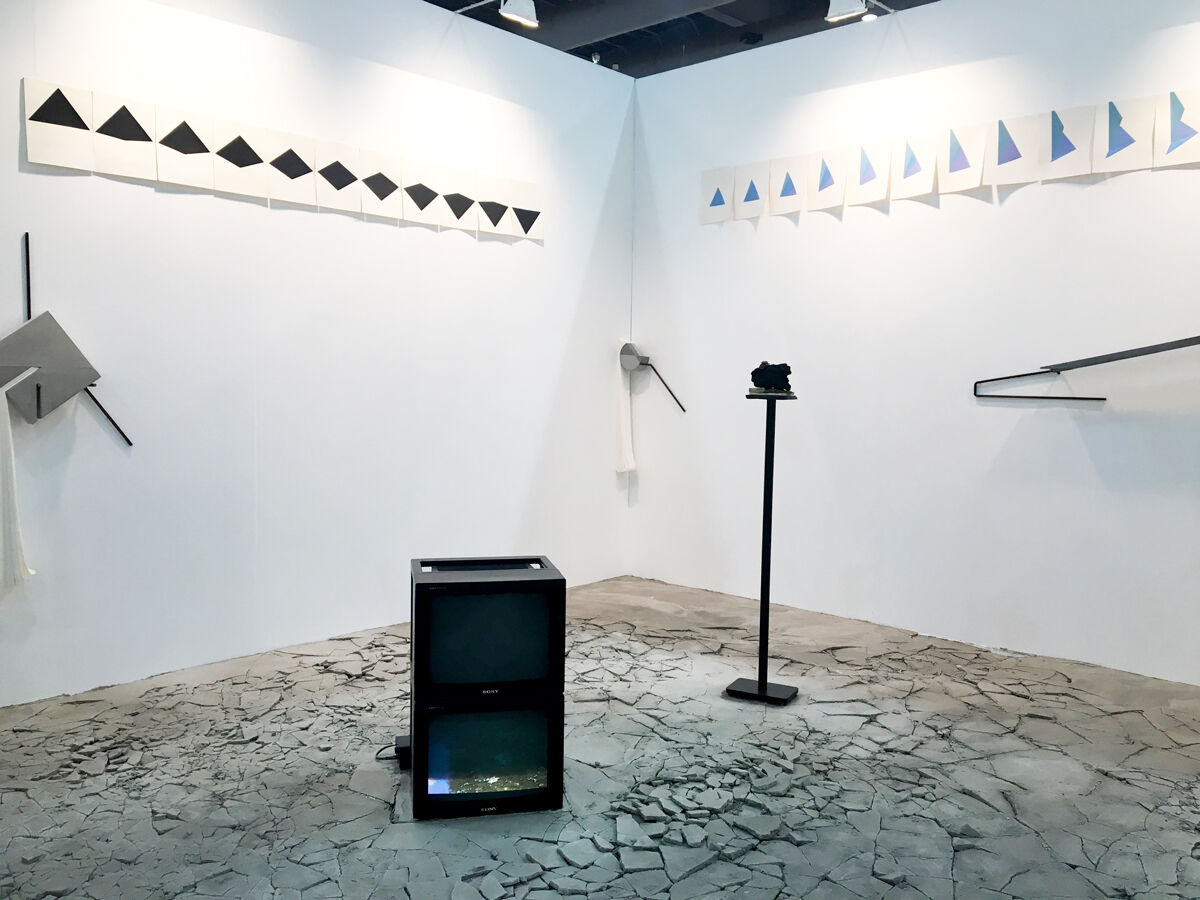 At the booth of Mexico City’s MARSO, a foam-and-concrete floor sculpture by Brazilian artist Lucas Simões is designed to crumble beneath even the most delicate footsteps of visitors. “I put together four artists around the idea of fragility,” says the gallery’s founder and director Sofia Mariscal. Also on view are five wall sculptures by Simões, part of the artist’s series in response to the perpetual instability of architecture over time, and the demolition of
Brutalist
architecture in England. A highlight of the booth is Italian artist Andrea Galvani’s towering stack of some 82 obsolete science books On Varieties of Oblivion, 2016—from Christiaan Huygens’s 1698 theory of the universe to the annual French astronomy publication Connoissance des Temps. “He’s been doing a huge amount of research into these discarded theories in science, and this knowledge is piling up,” says Mariscal. “So for me, it’s about the fragility of what we actually know.”

WITH WORKS BY FERNANDO OTERO 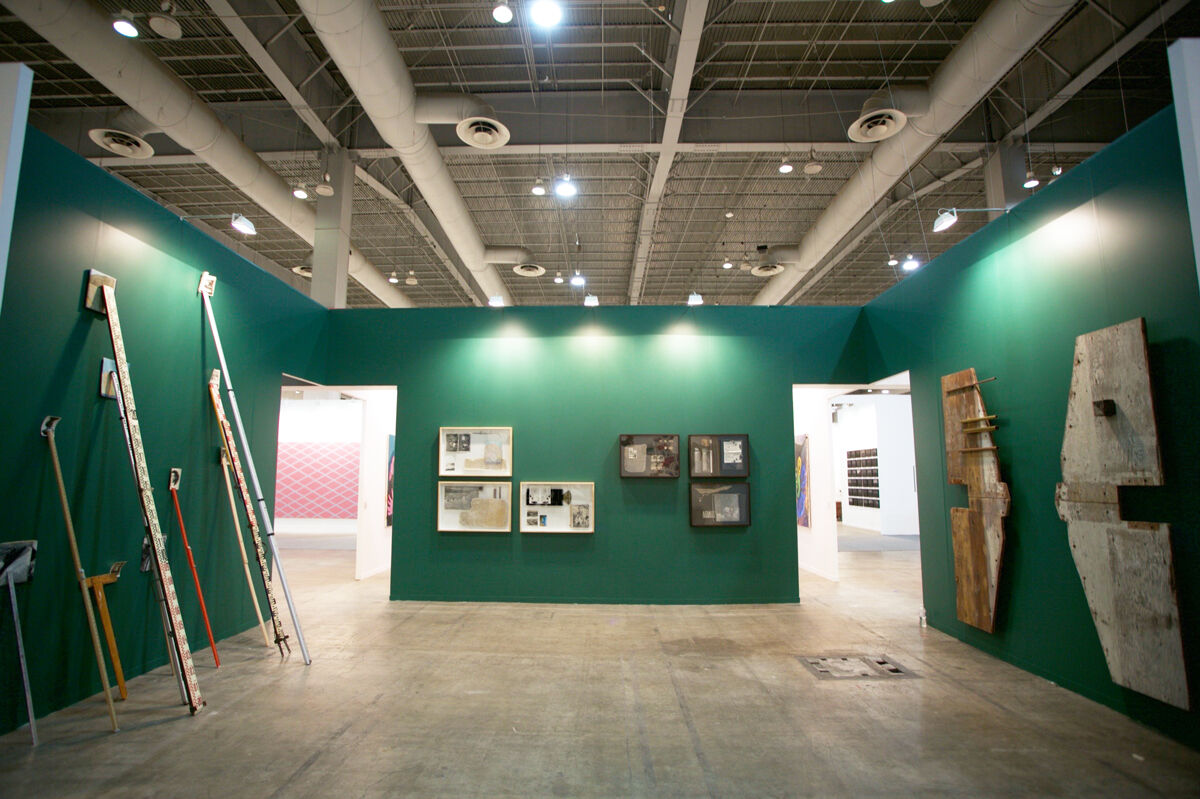 The most resonant work in LAMB’s powerful solo booth for Peruvian artist Fernando Otero almost didn’t make it into the show. The sculpture, Gathered Territories (2016), takes immigration as its focus; in light of the current moment (Trump’s executive order, the refugee crisis) it became a crucial addition. The work incorporates found photographs of Japanese immigrants in Peru during the 1940s, part of a contentious migration to South America that has ultimately seen Brazil grow to become the largest Japanese community outside of Japan. “We’re seeing this happening in front of our eyes with the way that certain countries have an obligation to take in immigrants,” the gallery’s Lucinda Bellm says. In Otero’s work, Bellm adds, we’re reminded of what this can do for a society—“for the good.” The works, priced on the range of $3,500–6,000, have found an engaged audience in Mexico City, with three pieces sold on opening day.

With works by Humberto Márquez 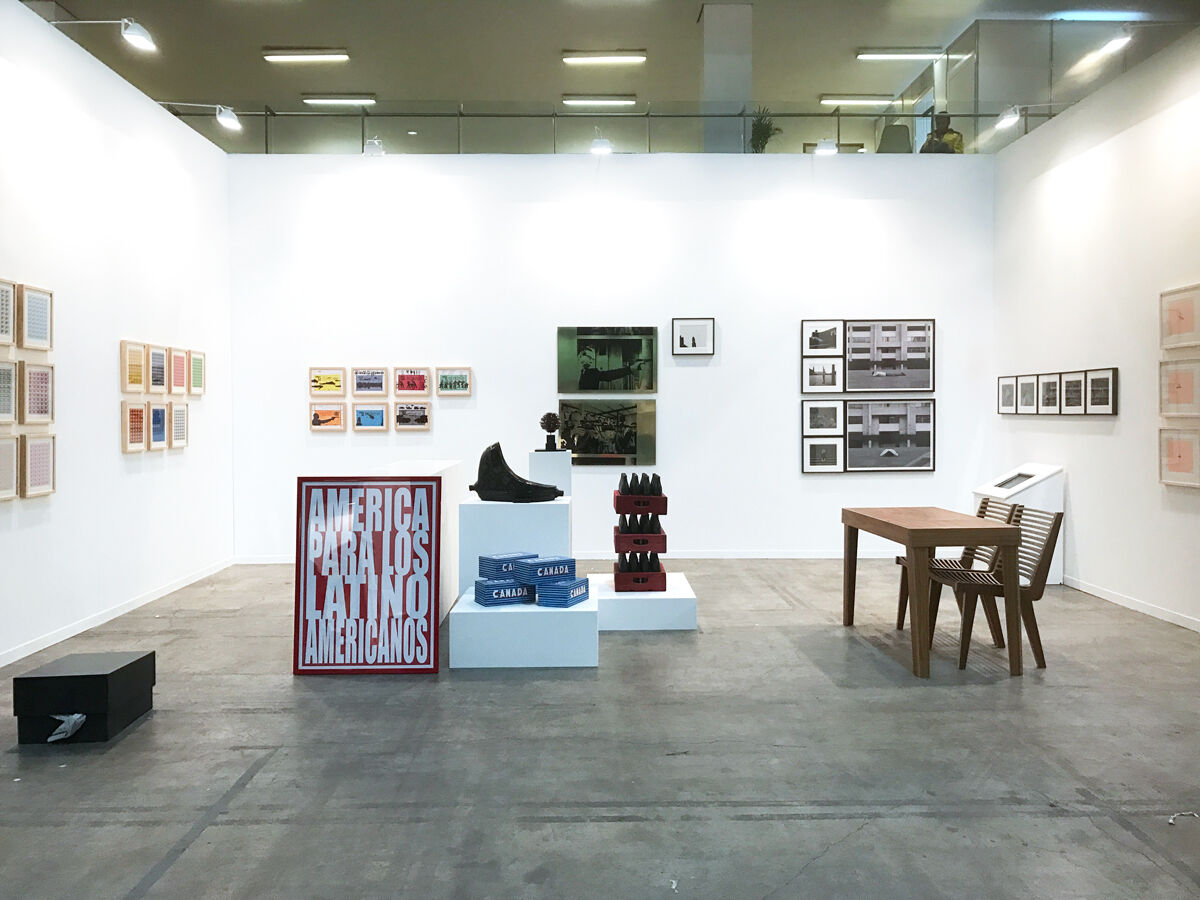 A solo booth by fictional artist Humberto Márquez—a creation of young Mexican artists
Emilio Chapela
and Plinio Ávila—takes a fantastic deep dive into the last half-century of art in Mexico. The two artists fabricated the life and work of the so-called Márquez as a vehicle through which to better understand the market, cultural policies, and socio-political environment from the 1950s to ’70s. “You can see connections between the artist, what was happening in Mexico, and what was happening in the world. It’s kind of a revision, in a way. And it’s all fake,” says gallery director Eugenia Sucre. As the story goes, Márquez was meant to be Mexican muralist
David Alfaro Siqueiros
’s assistant, but instead chose to make his own conceptual art, which is on display at the fair—editions on the range of $1,000–5,000 and sculptural works between $5,000–10,000. In one series, Márquez reimagines a well-known Mexican export campaign by swapping positive iconography on stamps (meat, books, machinery) with images that suggest the country’s negative output (marijuana, cocaine, organs, illegal immigrants). 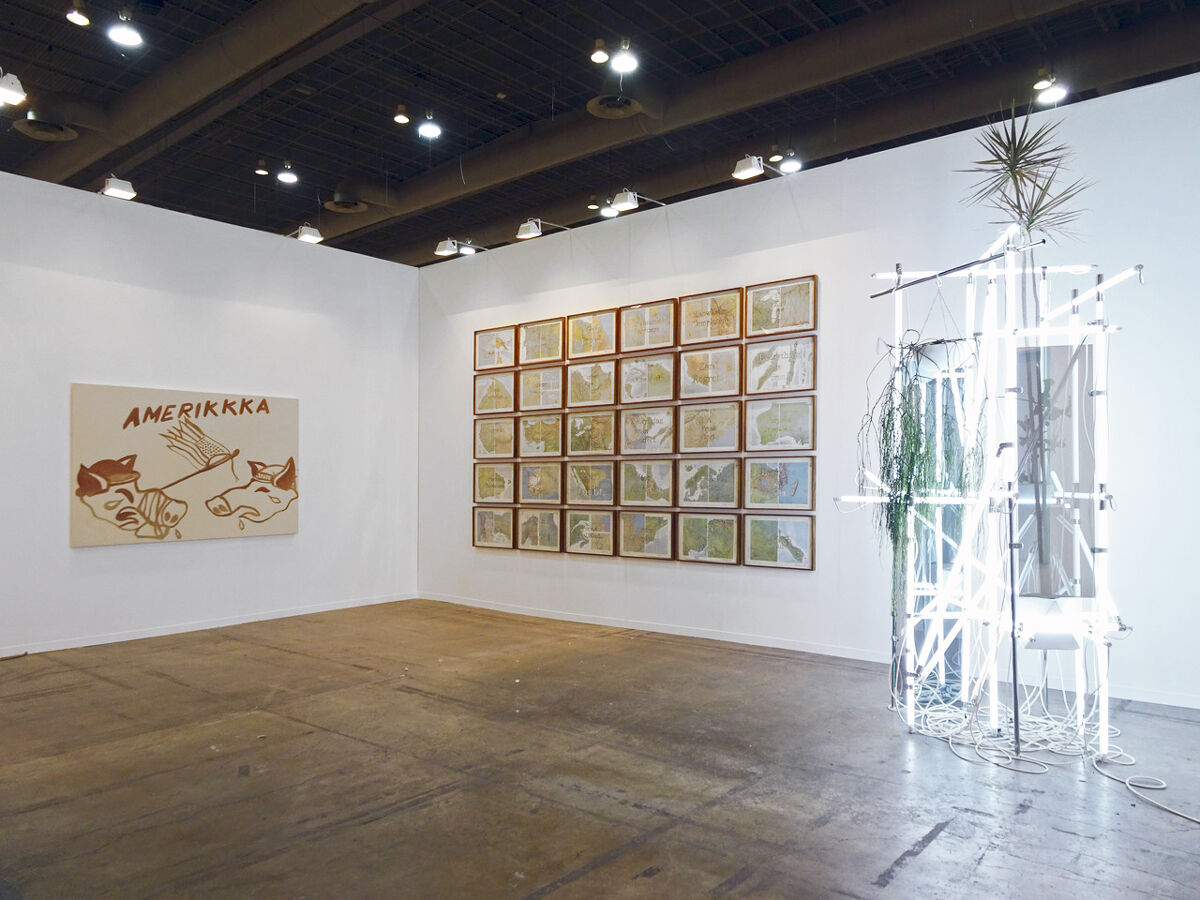 A painting by Mexican-American artist
Juan Capistrán
, scrawled with the word “AMERIKKKA,” makes for an immediate focal point at Curro, where the Jalisco gallery has brought together works of four artists. While the painting—titled Coup d’etat (the most beautiful sculpture is a paving stone thrown at a cops head (2017)—feels especially timely now, the gallery’s Noemi Ontiveros notes that political and social analysis is longstanding in Capistrán’s practice. The artist grew up in Los Angeles in the time of the KKK and the Black Panthers, surrounded by iconography like the pig popularized by Black Panther culture minister and artist
Emory Douglas
as a symbol of police and government oppression, and white supremacy. The work sees two such pigs painted on canvas with pigs blood. Nearby, Guadalajara-based artist Octavio Abundes’s work is a series of images that join maps of non-neighboring borders, overlaid with utopian and dystopian ideas that could never be realized—like “Everything is Free,” “Perfect Capitalism,” “Science Completed,” and “Everyone is Rich.” 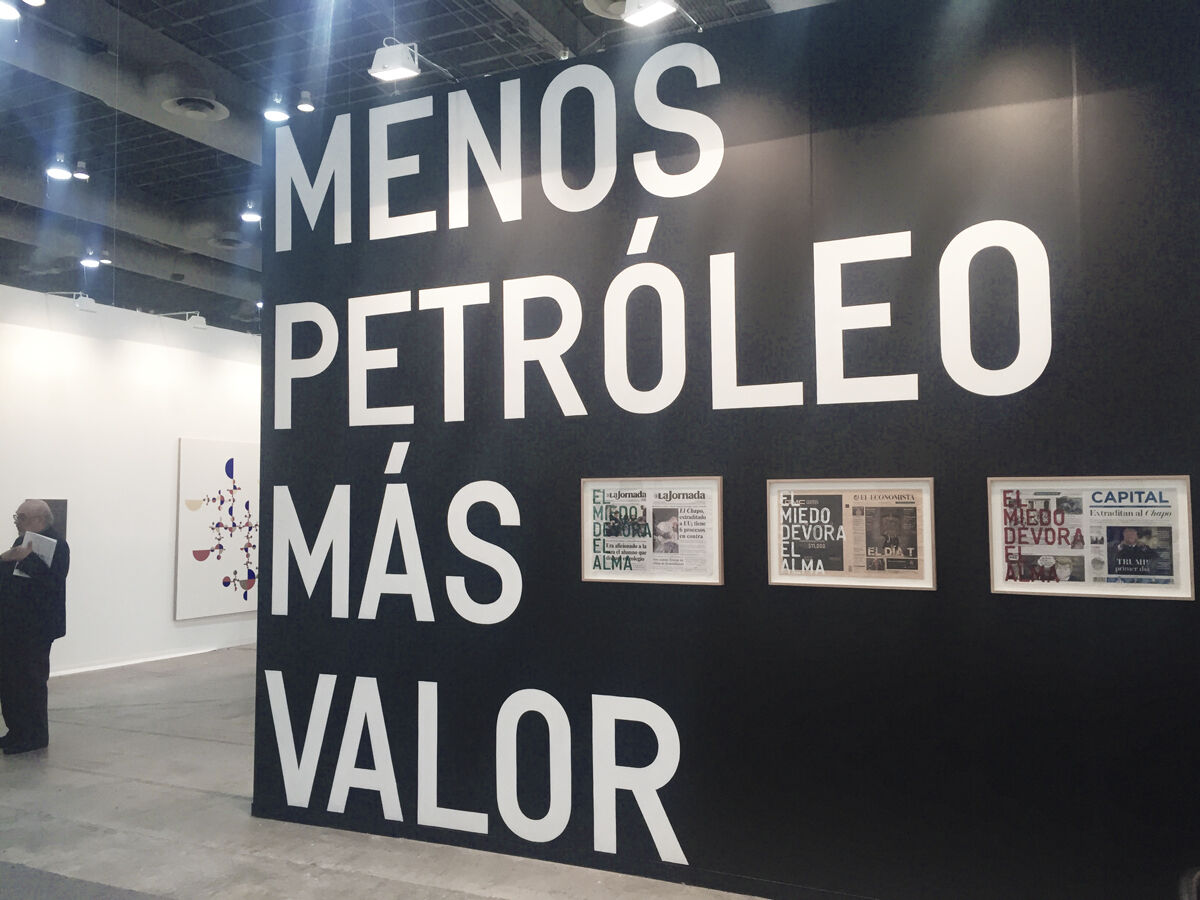 It’s impossible to overlook kurimanzutto’s less-than-subtle statement to fairgoers. The Mexico City gallery covered an exterior wall with a 2008 mural by Argentine artist
Rirkrit Tiravanija
that reads, in giant block letters, MENOS PETRÓLEO MÁS VALOR (“less oil, more courage”). It’s a timely message amid Mexico’s weakened oil market, which is further threatened by Trump. Three new works by the artist feature the front pages of Mexico’s most widely read liberal newspapers from January 20th, 2017 (the first day of Trump’s U.S. presidency), overlaid with the words EL MIEDO DEVORA EL ALMA (“fear eats the soul”) in the colors of the Mexican flag. “There’s this amazing confluence happening on the pages, which show of course Trump’s presidency but also El Chapo, the drug lord, being extradited to the United States,” says the gallery’s Bree Zucker. The response to the wall, which reflects the energy and brutality in both the U.S. and Mexico in this current moment, “has been explosive,” Zucker adds.

With works by Linder 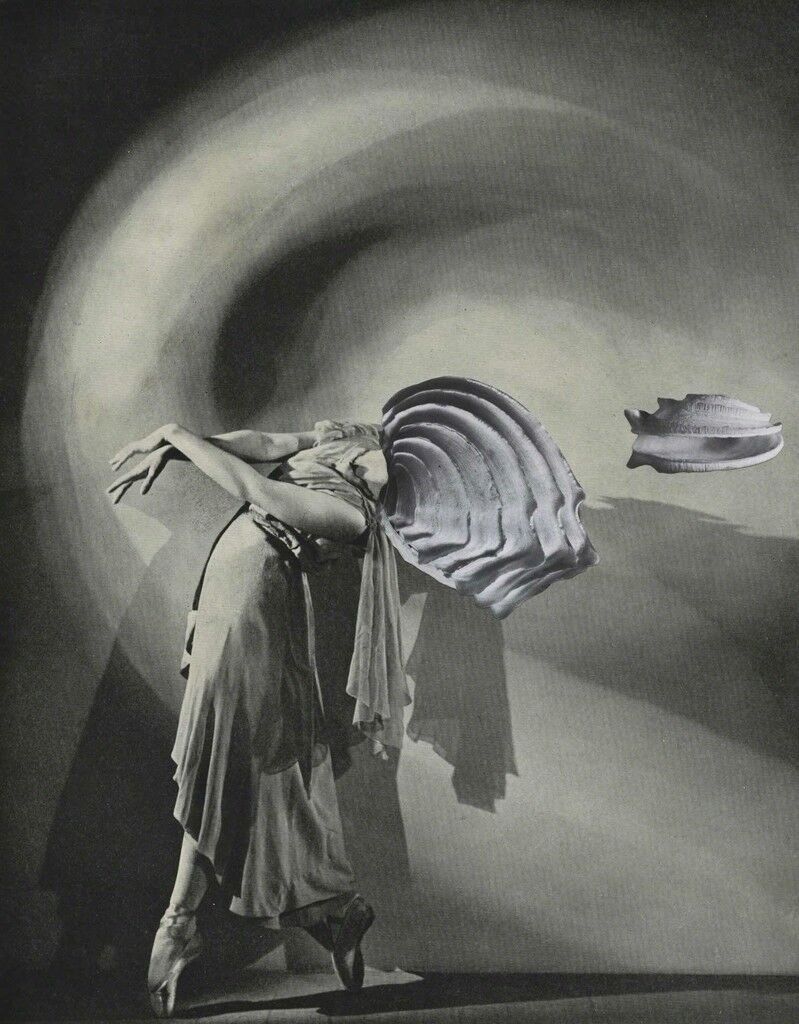 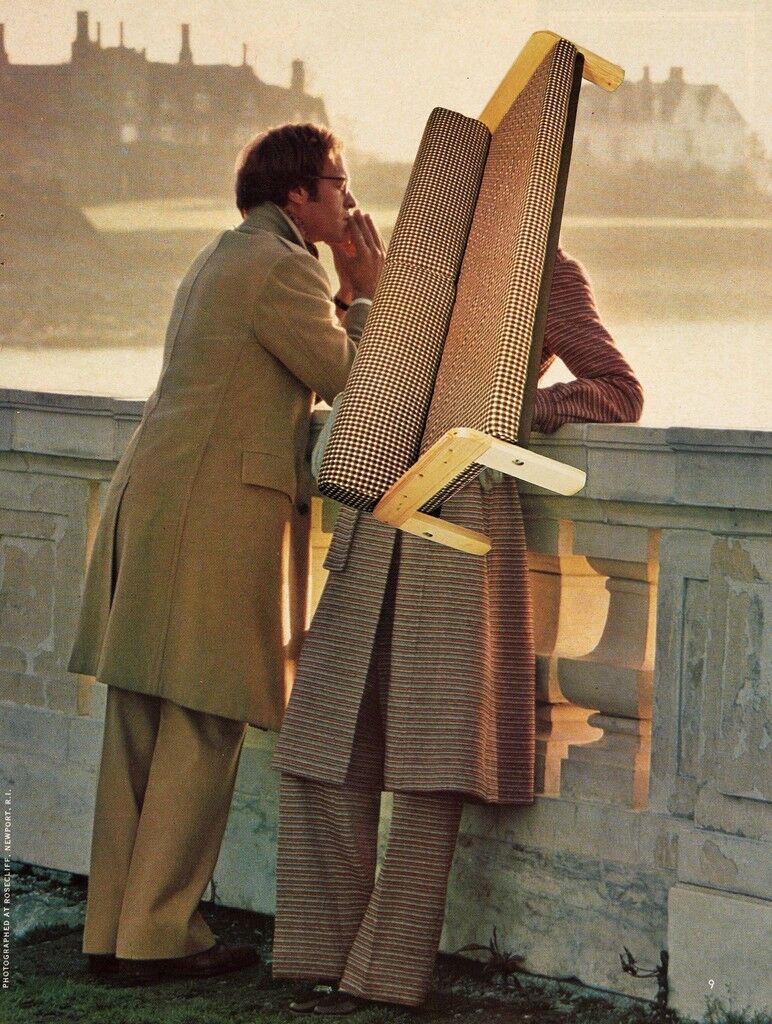 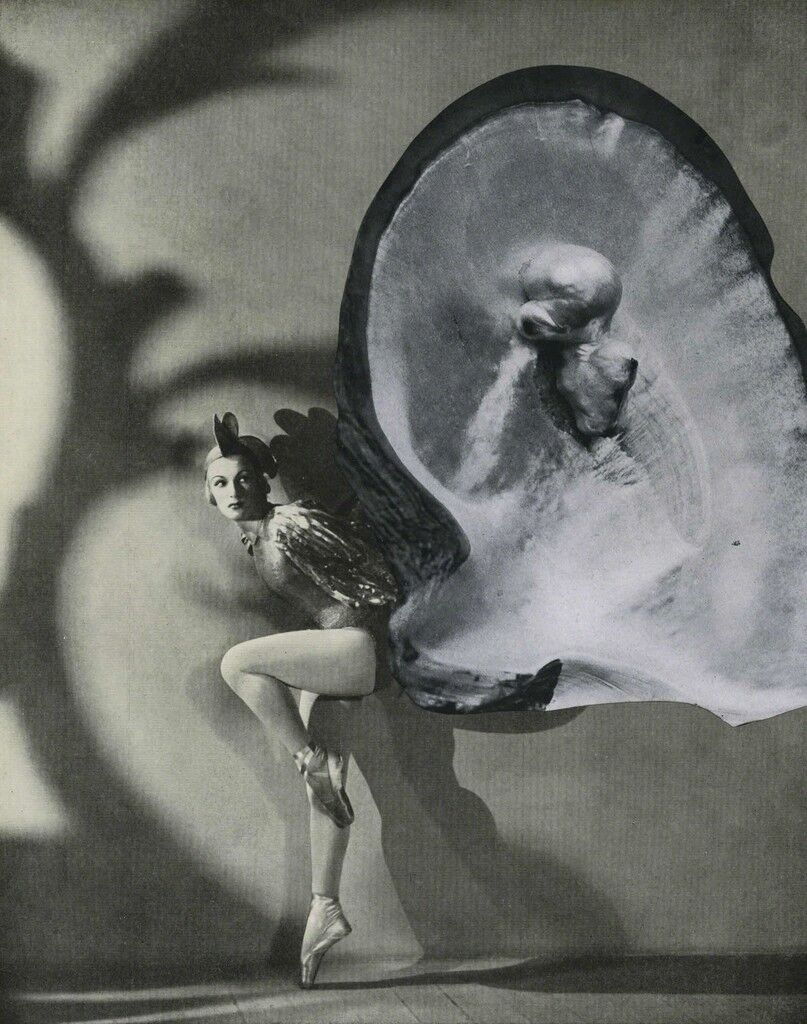 Linder
Post-mortem: Tatiana (ii), 2016
Andréhn-Schiptjenko
Feminist icon Linder takes center stage in a solo booth by Stockholm’s Andréhn-Schiptjenko. The British artist rose to fame in the mid-’70s amongst the Manchester punk scene. “Her work is about the commodification of the female body and the banalization of sexuality,” says Ciléne Andréhn, who is presenting 35 of the artist’s unique photomontages, spanning four series, for $7,000 apiece. Among them, works from her “Superautomatism” series see enamel blobs painted over images from 1960s British nudist magazine Health and Efficiency. For another series Linder culled found imagery from soft-core pornography magazines and strategically embellished their most racy parts with roses. Though the best of the bunch, from the artist’s most recent series “Post-Mortem” (2016), combines photographs of Russian ballet dancers from the 1930s with imagery clipped from natural history encyclopedias from the same era.

With works by Ximena Labra 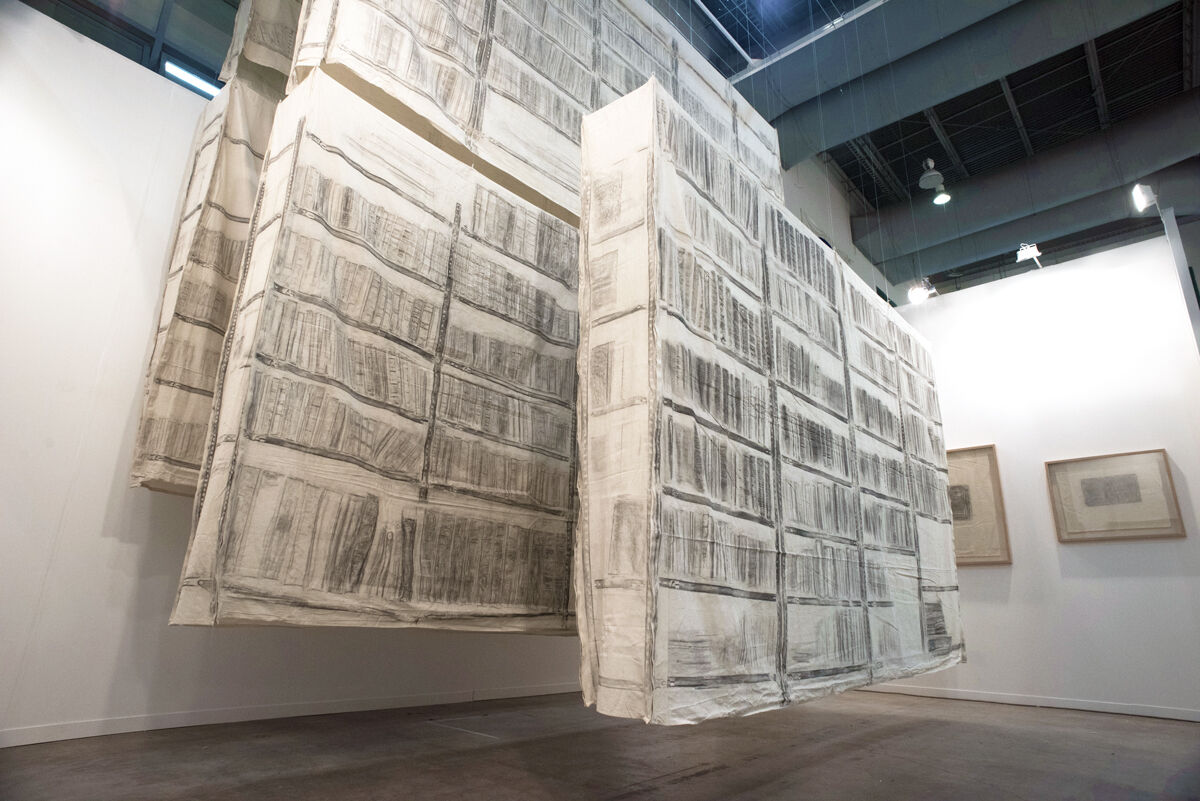 At Y Gallery’s booth, Ximena Labra’s life-size graphite rubbing of one of the largest private libraries in Central America, as she says, “honors the love and spirit with which one collects books.” In 2011, an artist residency in El Salvador led Labra to Miguel Angel Gallardo, who’d built one such library in his family’s home—only to see it damaged by earthquakes in 2001 and never recovered. “I decided to make a shroud for this library, and celebrate its spirit,” she says of this archive of dead books, which have been stored in a makeshift location and exposed to tropical weather. Her idea was realized as a suspended, life-size labyrinth of the shrouded library, from which five of the 14 bookcases are on view at the fair (the structures are priced at $19,000–20,000 each). Smaller rubbings of individual books—like The Encyclopedia of the Occult Arts, and the Genesis written in braille—are also on display, available on the range of $2,500–7,500.

With works by Juan José Gurrola 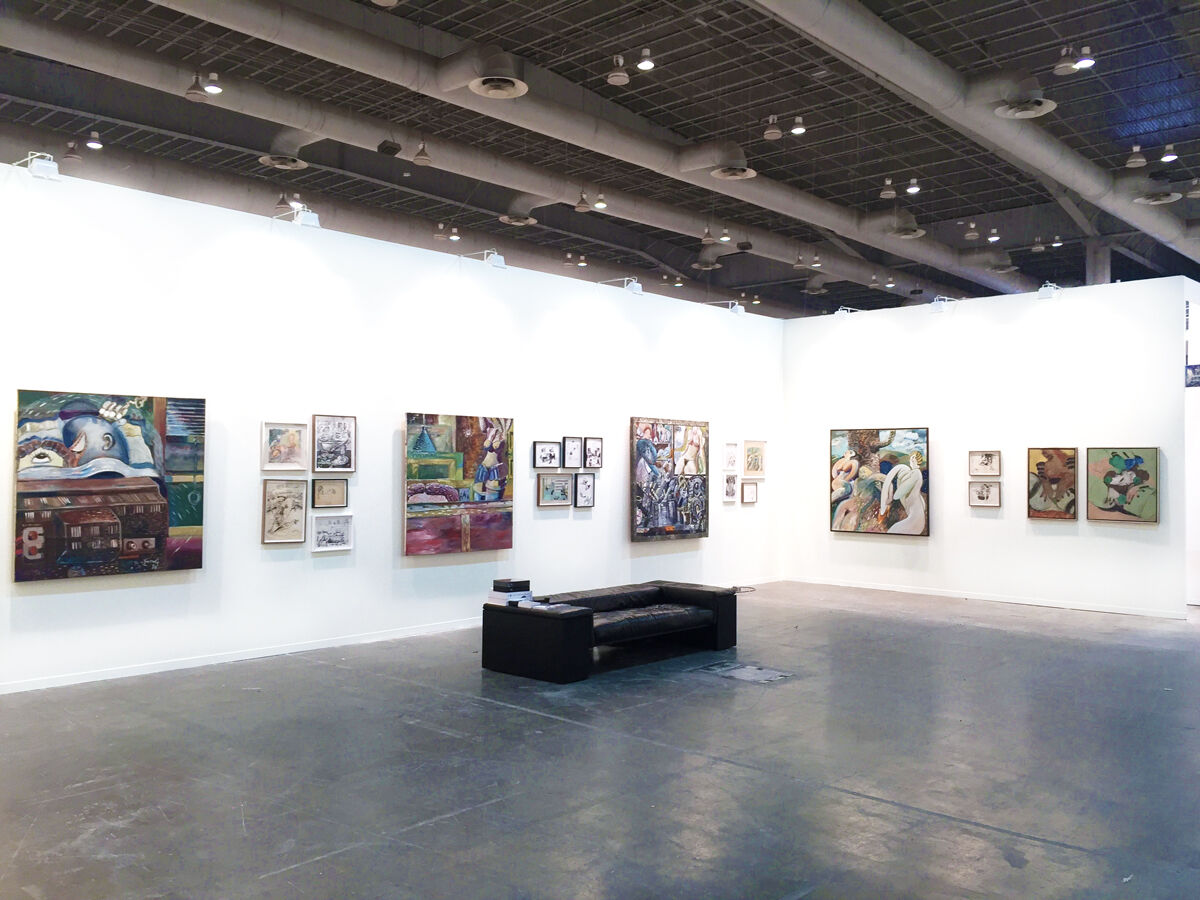 The Mexico City- and L.A.-based House of Gaga turned heads on opening day with wall-to-wall works by late Mexican artist
Juan José Gurrola
, who died in 2007. The lesser-known but prolific multihyphenate’s oeuvre spans everything from playwriting to set design. A wealth of figurative paintings and works on paper are on view, like Transmisión Automática, a 1984 painting that pictures a mechanic’s shop strewn with posters of nude figures. “There’s a generation of artists in Mexico that has been kind of overlooked,” says the gallery’s Gabriela Magaña. She places Gurrola among underrecognized Mexican artists who were active between the times of
Frida Kahlo
and
Diego Rivera
, and Gabriel Orozco in the ’90s. Though Gurrola worked with a gallery in the ’80s, he’s been somewhat overlooked in recent years. Judging by fairgoers’ response, House of Gaga’s attempt to correct this appears to be taking off.
Molly Gottschalk is Artsy’s Lead Visuals Editor.
Related Stories