Scott Indrisek
Dec 5, 2017 7:20pm
Untitled returned for its sixth edition in Miami on Tuesday, its stylish tent set up mere feet from the waves crashing onto South Beach. The fair continues to hone its status as a go-to stop for savvy collectors, especially those whose budget might max out at $10,000. Artsy hit the booths on preview day to scout the works that you’ll want to keep your eye on. 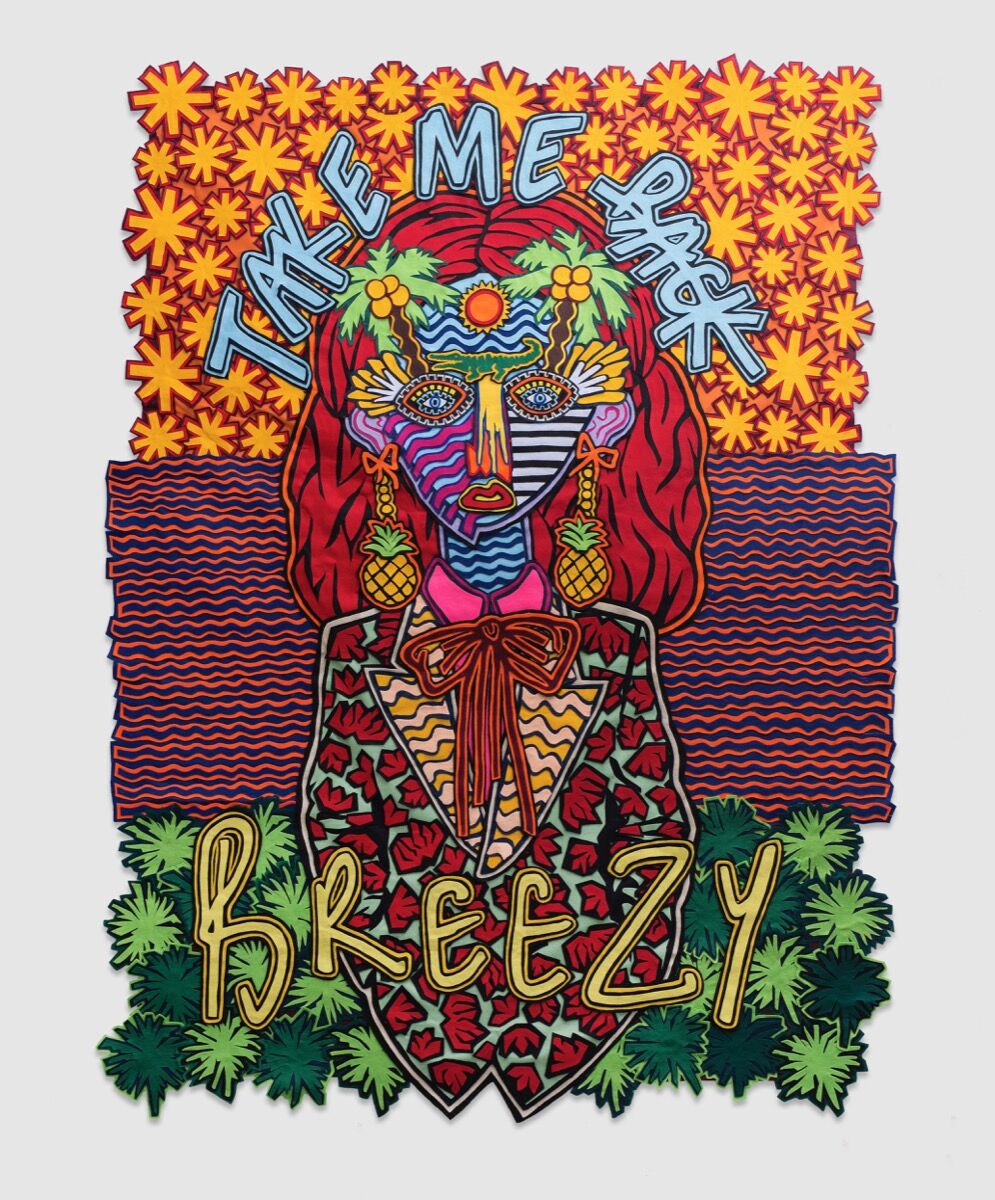 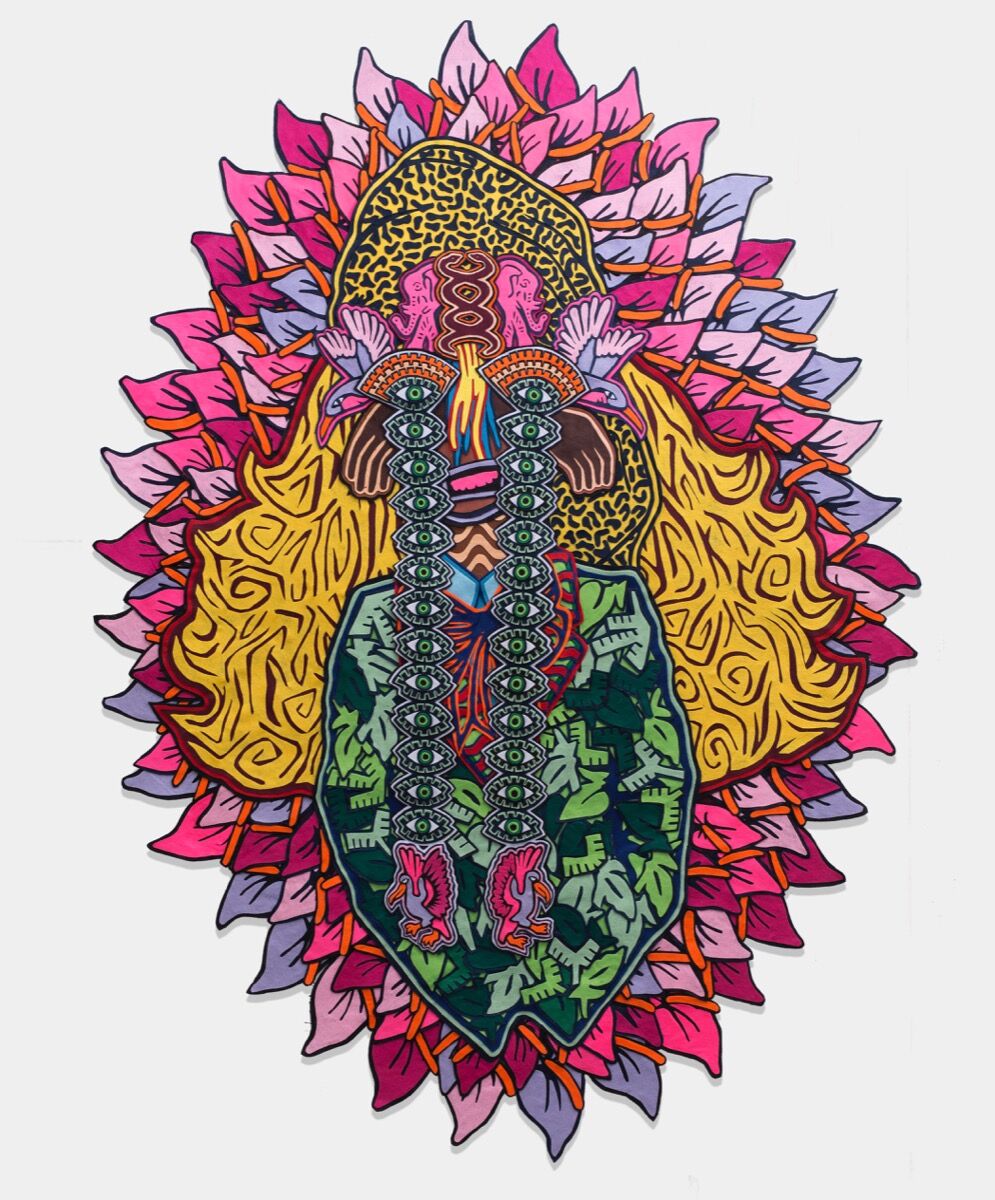 It’s the usual genesis story: The South African artist was at his preferred drag bar, watching his friends vamp and strut on the dance floor, and he realized they looked a lot like the angular, fractured women in
Pablo Picasso
’s Les Demoiselles d'Avignon. He decided to memorialize the moment using his new favorite medium—kid-friendly Fuzzy Felt—and emblazon it with an appropriate title (The Fag Hags). From there, Paulsen made an additional series of cut-felt portraits, several of which are on view here. One is a composite depiction of three of the artist’s ex-boyfriends, with the Frankenstein figure sporting a particularly phallic nose. (“Obviously a dickhead,” Paulsen affirms.) While he starts many of these pieces intending to depict specific friends, they tend to get weird along the way, growing animal bits and multiple eyes. Why? He often has people visiting him in South Africa, and he takes them on safari excursions. “This,” he says, “is where I get a lot of my ideas.” The irreverent, eye-popping felt works range from $10,500 to $14,000.

B. 1983, Oakland, California. Lives and works in Chicago.

On view at Untitled: Western Exhibitions, Booth A4 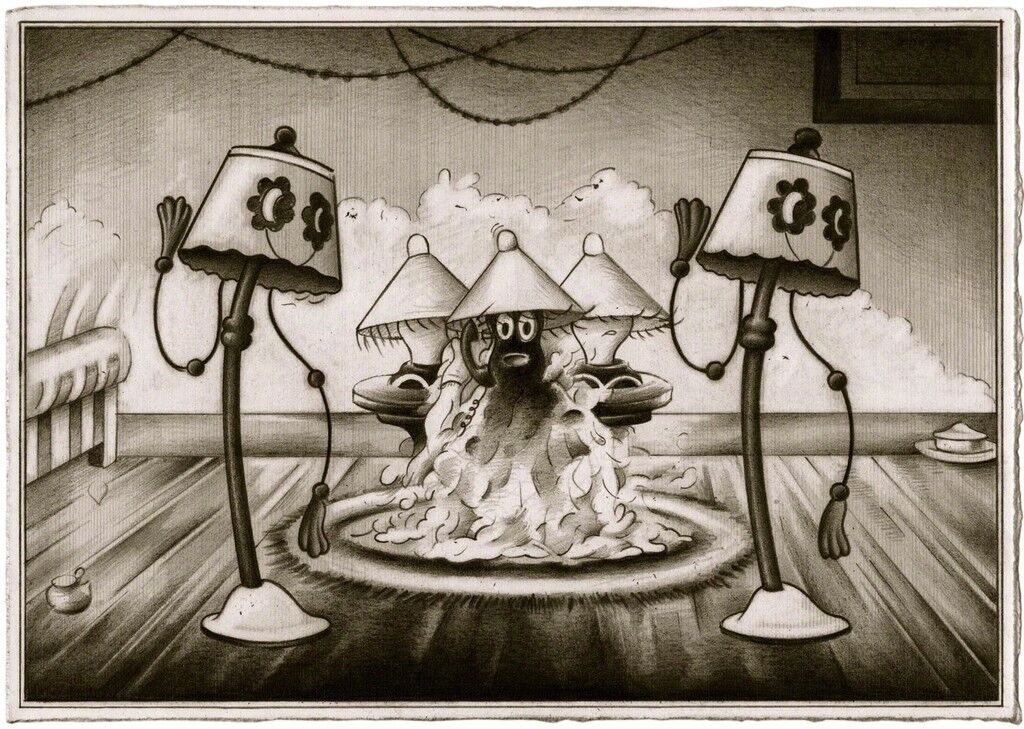 Ryan Travis Christian
JESUS CALLED HE SAID U SUCK, 2017
Western Exhibitions
Advertisement
An array of small, 7x10-inch graphite drawings (priced at $1,200 each) allude to early 20th-century political cartoons, and exude a kind of vaudevillian energy and humor. In a representative example, a bunch of monkeys and tigers go nuts while gawking at a photo of a baseball cap-wearing bro who sports an impressive erection. Elsewhere, a bashful version of Betty Boop makes an appearance. Gallerist Scott Speh tells me the artist has been working feverishly in this mode, and at this scale, for the past year, with around 100 drawings so far (let’s hope they all bear titles as wonderfully weird as Clown Blocker and If You Look Closely You Will Notice That I Am An Excellent Lover).

B. 1982, Southern California. Lives and works in Brooklyn.

On view at Untitled: Albertz Benda, Booth B13 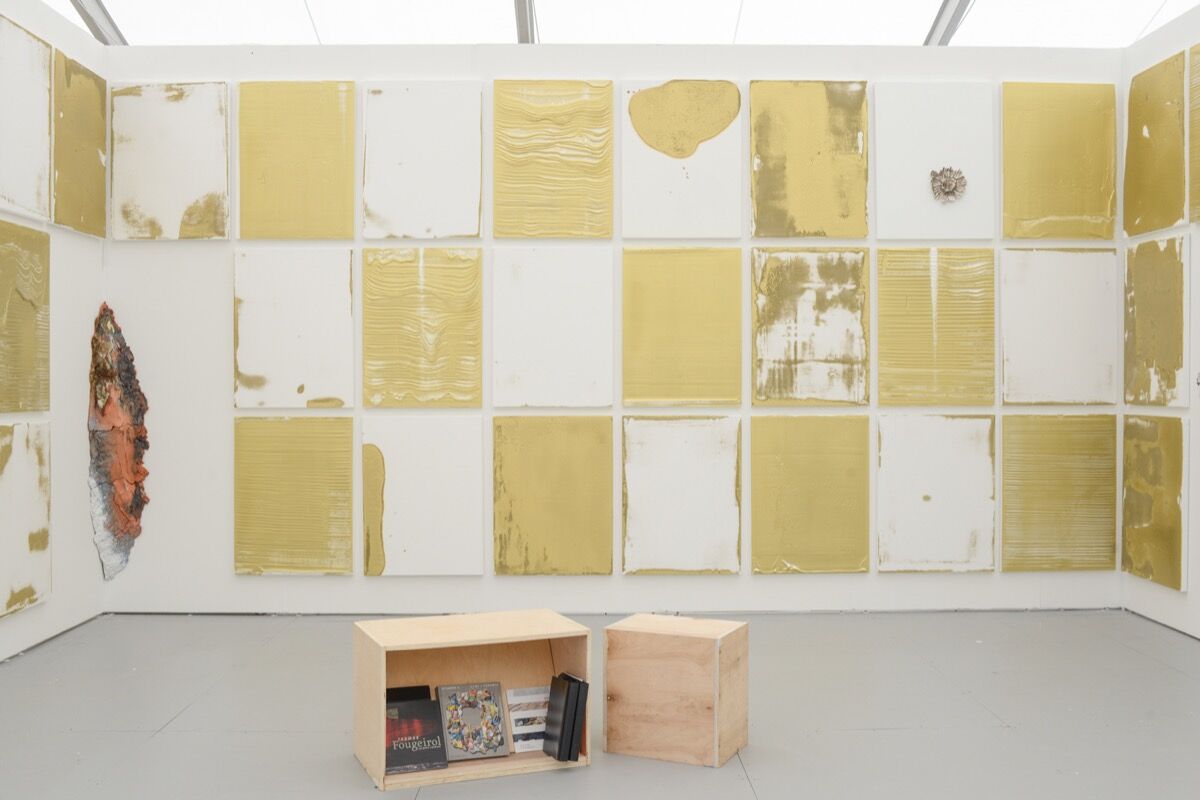 Ceramics might be all the rage these days, but Ruais is doing things with the medium that set her apart from the eager pack. She treats her sculptures much like the conclusion of a performance, one that has her scraping, clawing, and pushing her material into flattened shapes, or into the corners of rooms, before firing it in a kiln. For Untitled, she’s worked together with the painter
Thomas Fougeirol
, whose gold-colored, process-based abstract paintings form a thrilling counterpart to her bodily, hand-imprinted forms. A pair of metallic-colored works that would fit easily on a shelf are $5,000; the more sprawling pieces are around $20,000.

B. Chicago. Lives and works in New York. 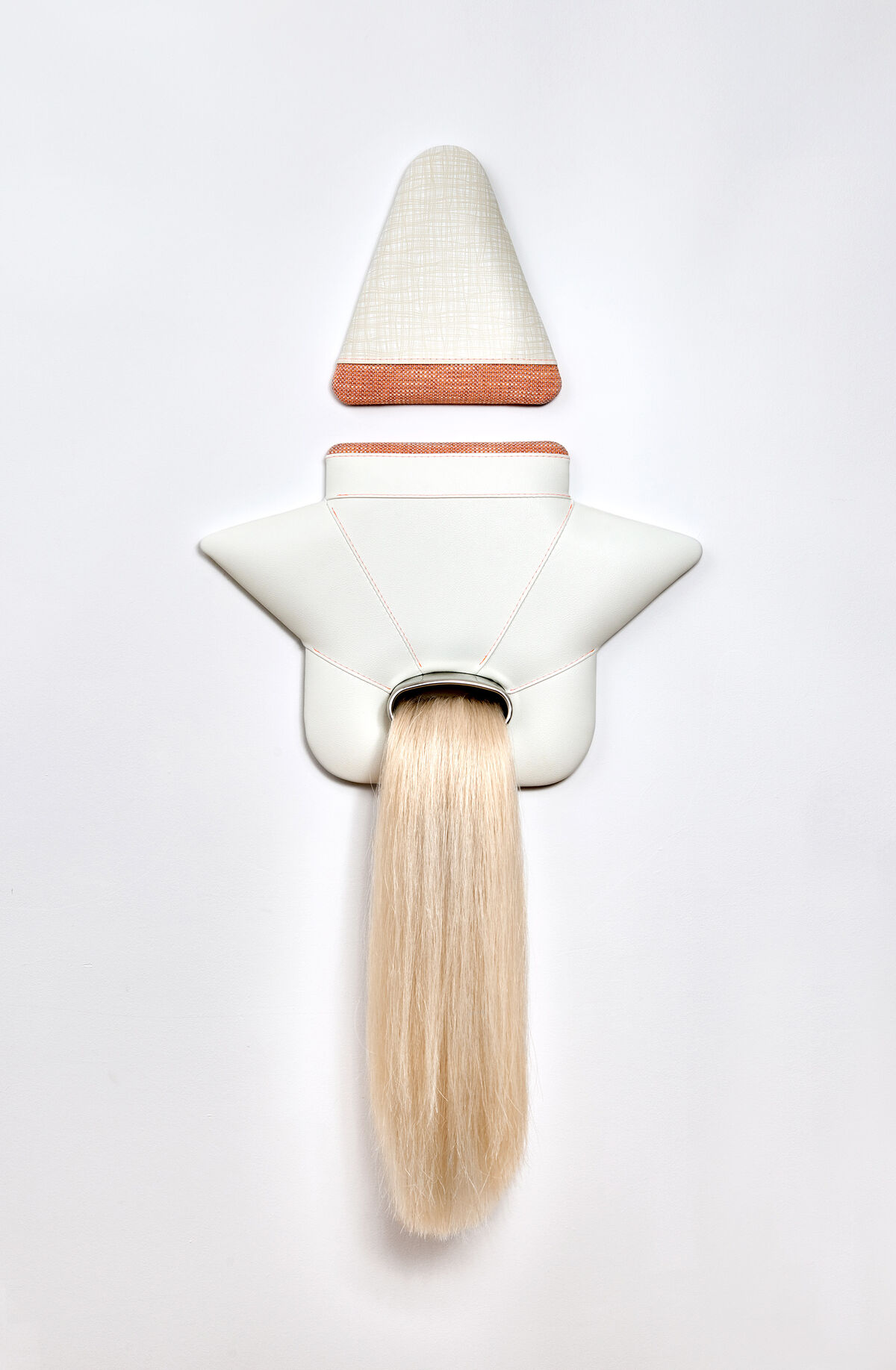 An heir to the spirit of
Diane Simpson
, Tillman upholsters wooden sculptural forms with vinyl, suede, leather, and other materials to create talismanic-looking wall pieces, some draped with chains and colorful cords. In one, a burst of horse hair extrudes from an automobile exhaust pipe. Geisberg tells me that the artist is thinking about “ritual, but also cheapness and tawdriness.” Her interest in synthetic, borderline kitsch materials and textures apparently derives from her childhood with a salesman-father, whose roving vocation meant she spent a lot of time in middle-brow bars and restaurants. The sculptures on view range in price from $3,500 to $5,500. 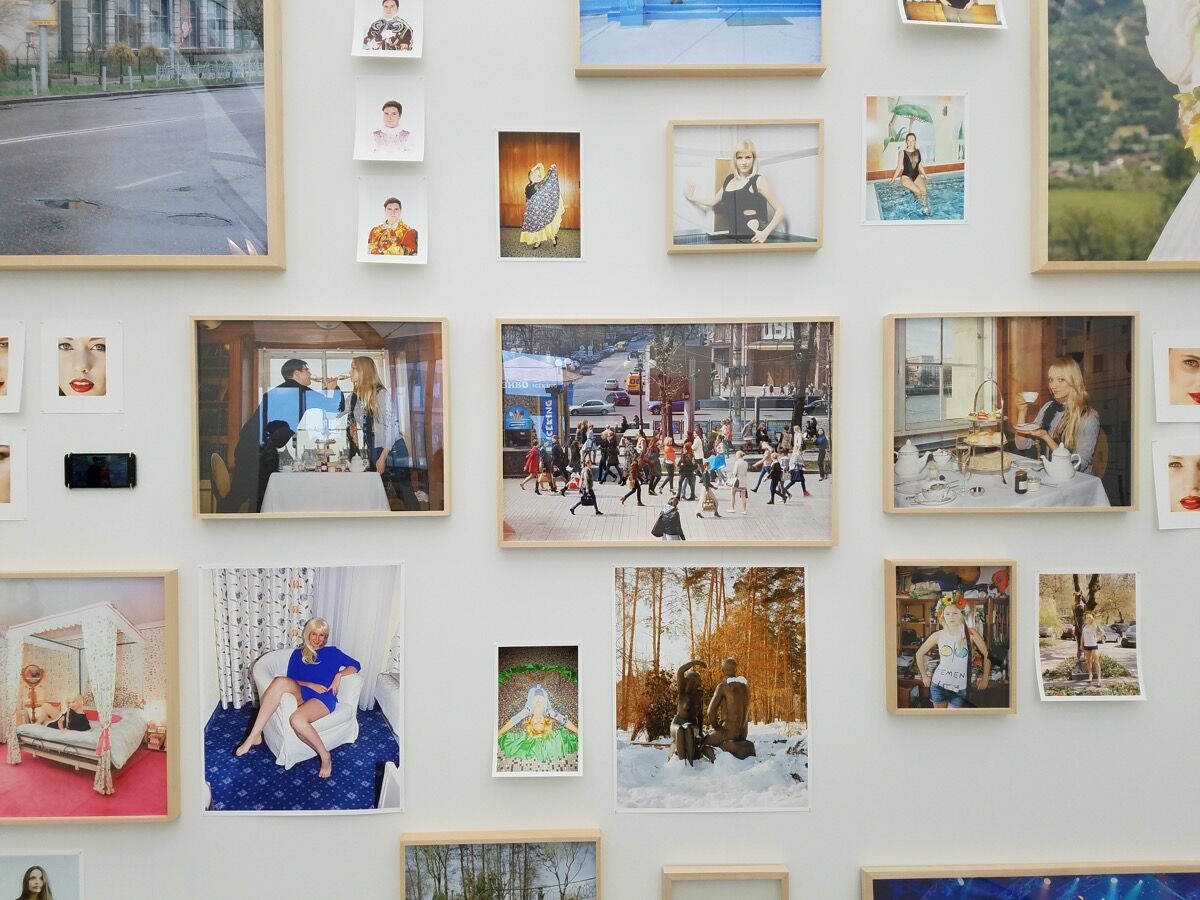 The young photographer has some serious institutional chops under his belt—his work has been shown at the Tate Modern, and is currently at the Foam Fotografiemuseum in Amsterdam—but Untitled marks a sort of coming-out for him in market terms. (Small, unframed pieces run around $1,500, with larger works for about $6,000.) A full wall of the booth is hung with selections from his ongoing series “Ekaterina,” which he began in 2012. The series was collected in book form last year, but its queasily uneven power dynamics resonate even harder in 2017, this year of toxic masculinity on parade. It’s a fictional fantasia about Romain’s excursions to a city in Ukraine where, as the artist describes it to me, beautiful blonde women are simply lining up to meet foreign suitors. We see the slightly pudgy hero of this saga as he poses with various potential matches, all vying for his bespectacled attention (one of them is his real-life girlfriend and collaborator, the artist Nadja Kilchhofer). An accompanying video fleshes out the full narrative: We watch as Mader arrives in this dream city of Eastern Europe, a place where all the hot romantic action unfolds at an unlikely spot called Chicago Biker’s Bar. “I fell in love every 5 minutes,” he confides. He can’t dance, but the girls don’t care. 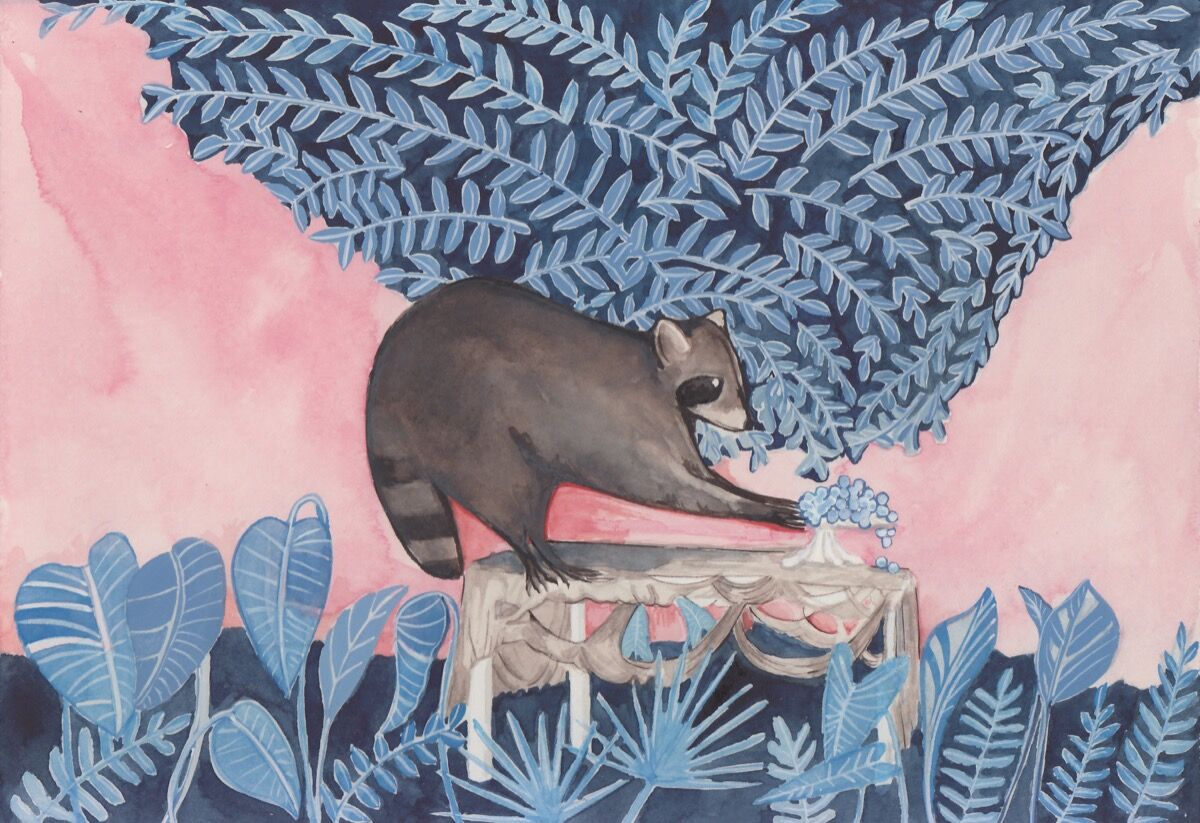 Dana Sherwood, Raccoon upon a Table, 2017. Courtesy of Denny Gallery.

“Our whole booth is about decadence,” explains Robert Dimin, who has paired sculpture and video by Sherwood with idyllic paintings from
Jessie Edelman
. (Not that this is a straightforward celebration of excess, he notes; in the age of Trump, there’s always a bit of rot beneath the shiny facade.) There’s a trio of glass cases that house unconventional terrariums: cake, vegetables, and moss arranged in a sort of tower, with live snails nibbling around the structure. “There’ll be a little bit of decomposition, a little bit of eating” during the run of the fair, Dimin says. Would-be collectors don’t walk home with this wilted, snail-nibbled concoction, mind you. A $6,000 acquisition nets a handsomely drawn diagram of the finished product; on the back, there’s a recipe for how to prepare and assemble the whole thing. (You also get the glass dome, and some starter snails.) “It’s for experienced collectors,” Dimin says. The gallery is also showing a series of winsome videos, for which Sherwood researched the culinary tastes of various wild animals in places from Florida to Brazil, and then left a sweet spread of grub in their natural habitat. Night-vision cameras capture the resulting meals. (Spoiler alert: Racoons have terrible table manners.)

B. 1986, Virginia Beach, Virginia. Lives and works in Los Angeles.

On view at Untitled: Horton Gallery, Booth B12 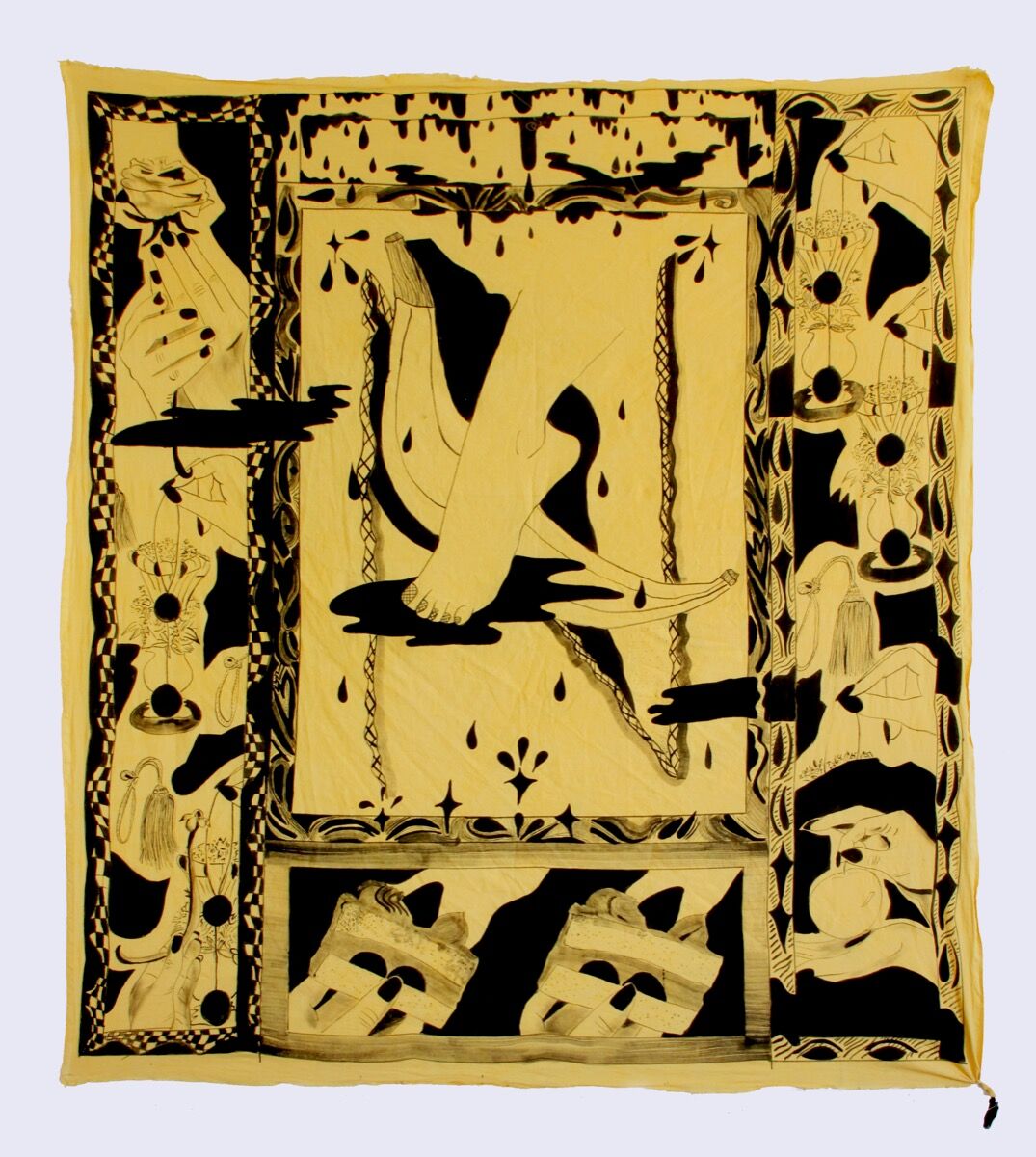 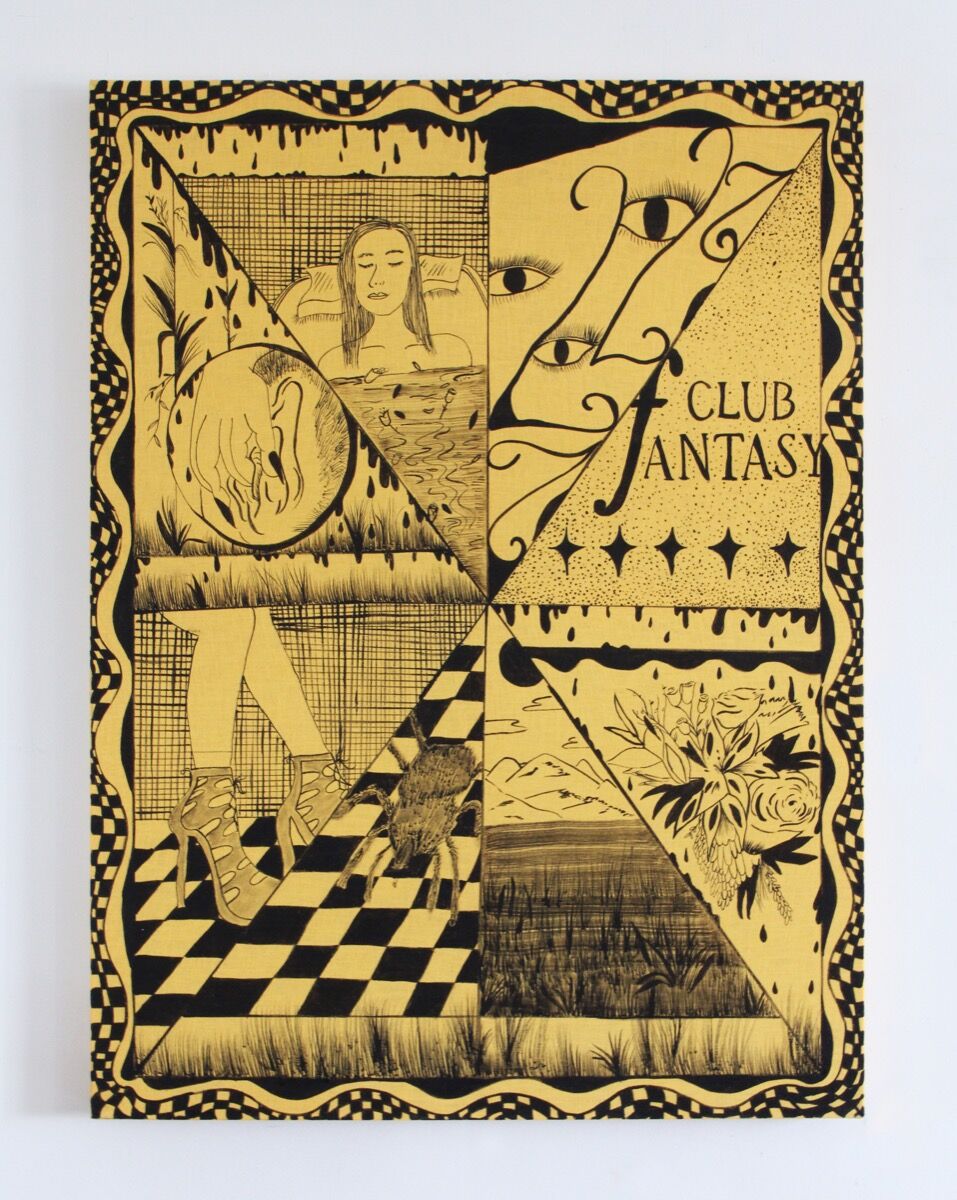 Working primarily with black ink on yellow-dyed muslin, Felton splits the difference between drawing and painting. Her stark, illustrative style conjures grim fairy tales via the tattoo parlor. In Club Fantasy, a dream-like storyboard shows a woman in bed; a mountain landscape; a pair of high heels; and one very hairy spider. Other works jumble cocktail glasses with bats, occasionally flying out of various orifices. They’re each selling for $3,500; if you’re skint, hand-drawn t-shirts by the artist are a more accessible $40. Meanwhile, from December 6th through 9th at 4:30 p.m., Felton and a few collaborators will be performing a dance on the nearby beach that takes a nod from her paintings’ subject matter.

On view at Untitled: Rosenfeld Porcini, Booth A14 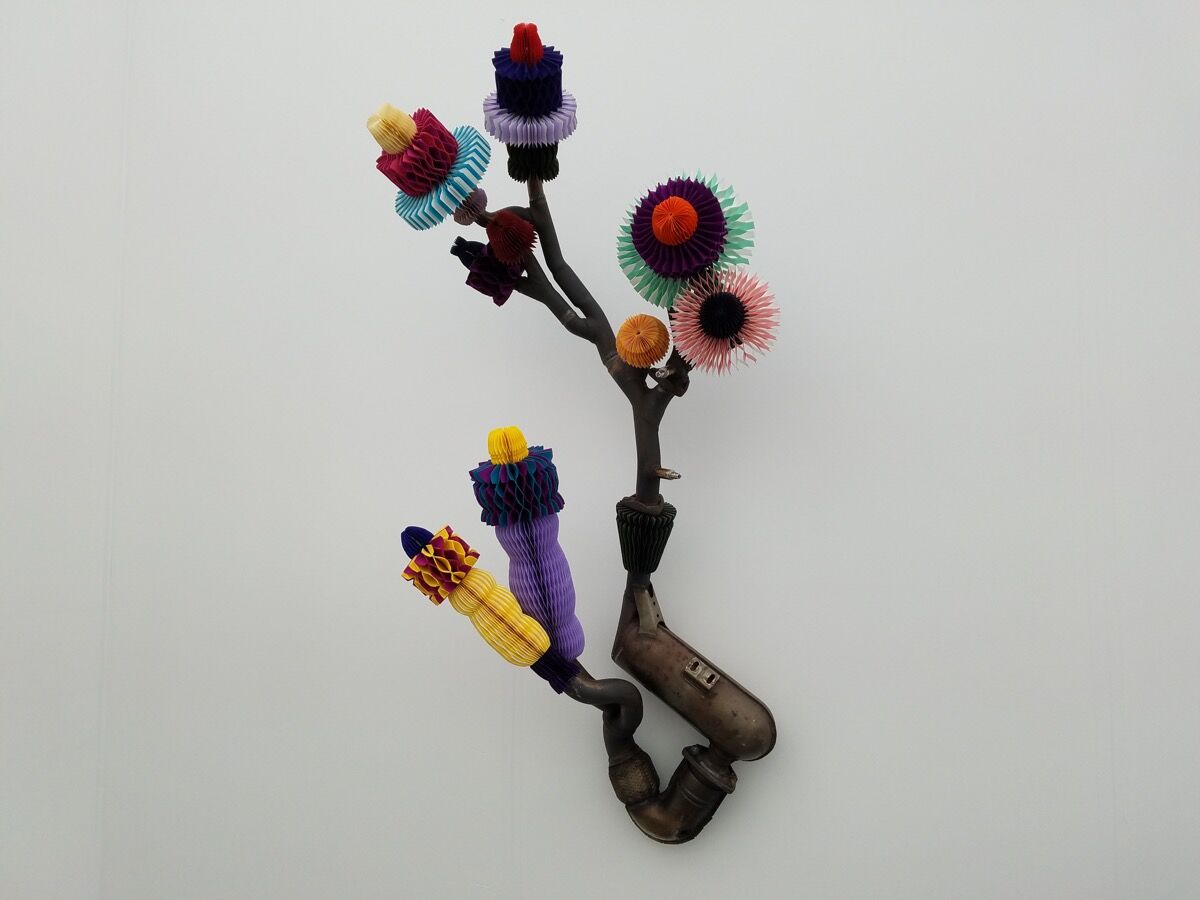 The artist, who holds a Ph.D. in craft metal casting, was inspired to start making these works in the wake of the 2011 earthquake and tsunami that ravaged Japan. They’re ugly-beautiful mutant assemblages of fused engine parts ornamented with gaudy flourishes of felt or paper—a “kind of origami,” according to dealer Ian Rosenfeld. A series of small vitrines, he tells me, are meant to evoke 19th-century vanitas still lifes. In one, a small origami crane (folded from a stock certificate) is joined by a small cup of sand and some woodworking tools. The smallest works in the booth will set you back around $4,000, with the more monumental sculptures commanding $14,000.

B. 1984, Rockville, Maryland. Lives and works in Chicago.

On view at Untitled: Andrew Rafacz, Booth B6 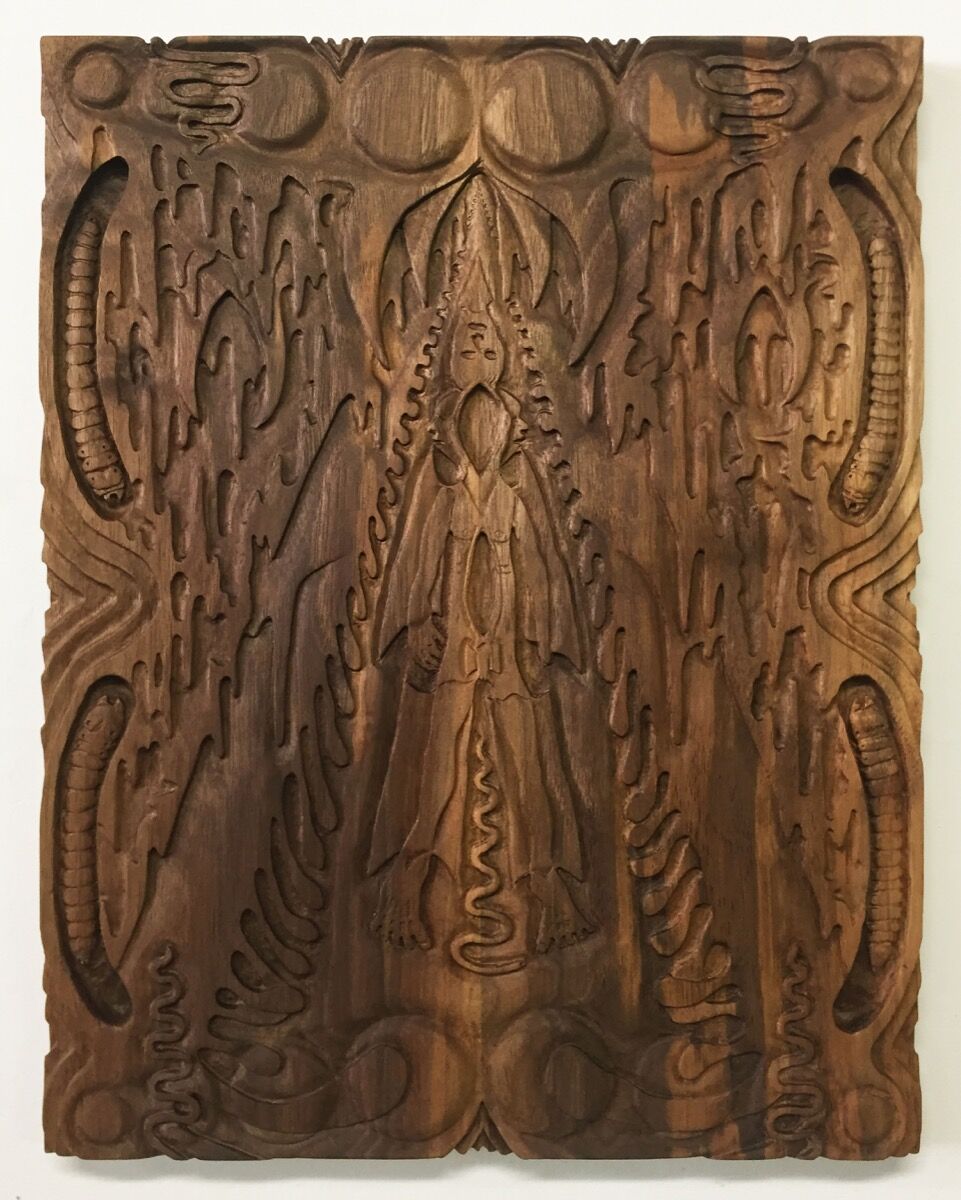 Josh Dihle, The Meat and the Medicine, 2017. Courtesy of Andrew Rafacz Gallery. 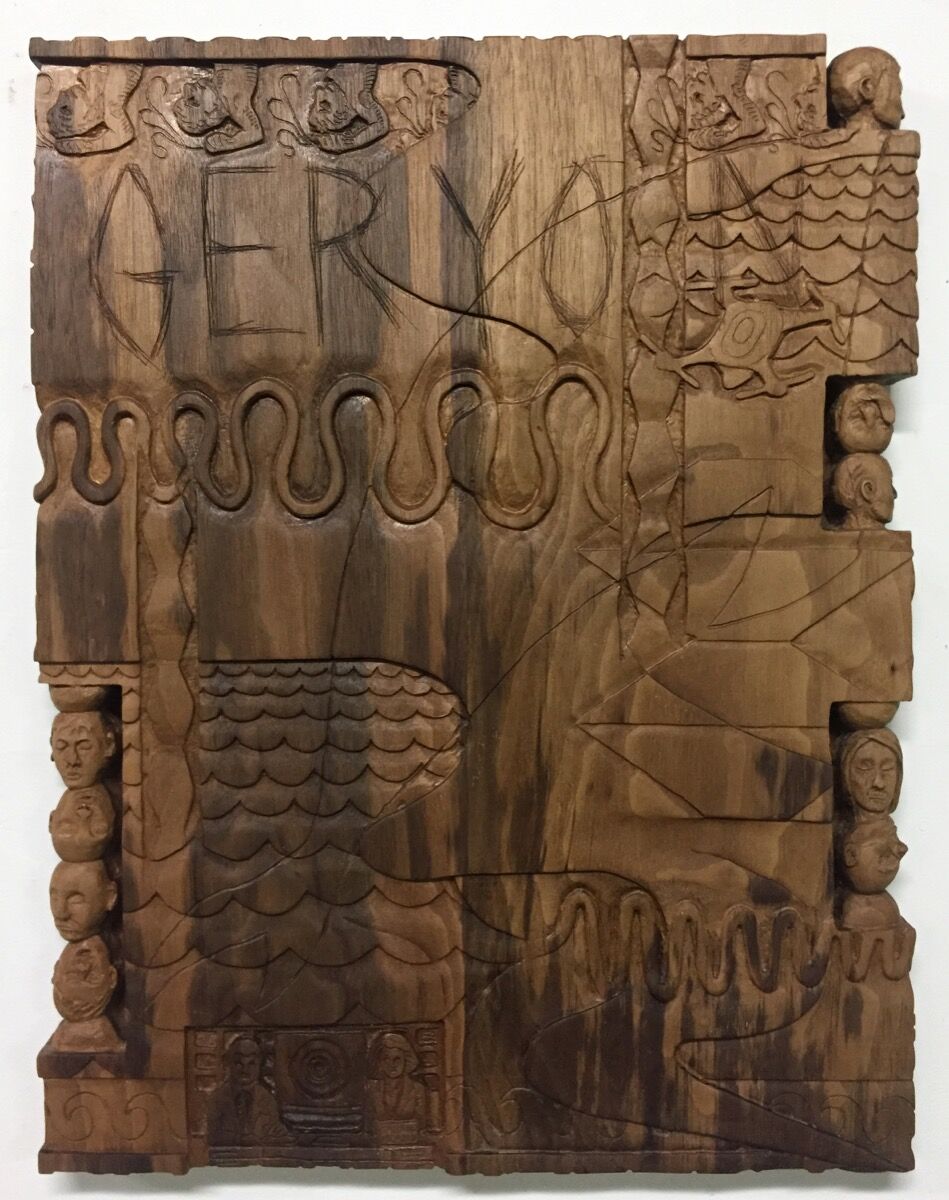 Sometimes a painting is just a painting; sometimes it’s a slab of artfully gouged wood. These modestly scaled, intricate reliefs (all from 2017) pack a lot into their oxidized walnut surfaces. According to the gallery, the series plays on Dante’s Inferno by way of
Robert Rauschenberg
’s visual interpretations of that text, dating between 1958 and 1960. The most subtle of the bunch, Hot River, seems at first to be a cascade of gentle, abstract ripples; look closer, and an eerie row of bald, eyes-closed heads comes into focus.

On view at Untitled: National, Booth A25 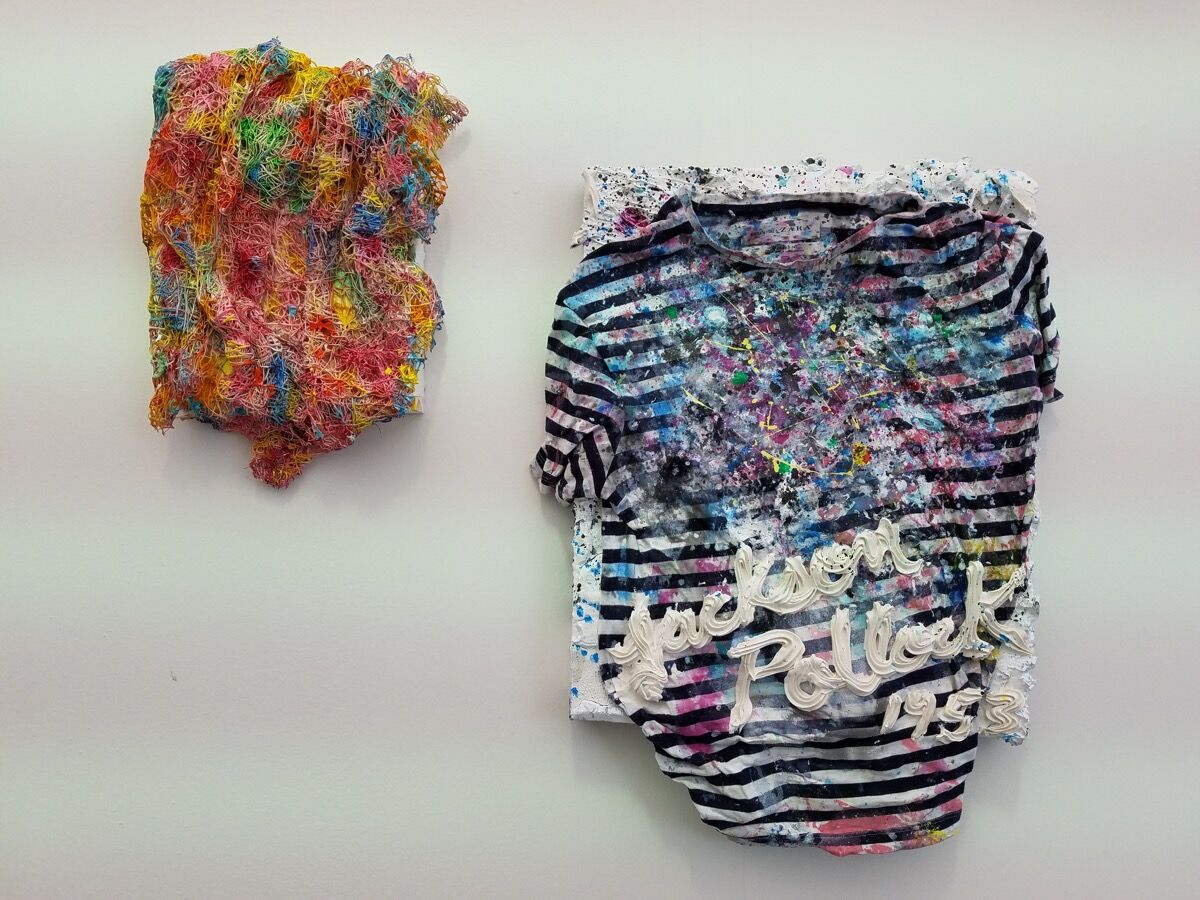 This gallery based in Santurce, Puerto Rico, proves the epic resilience of that island territory. Miami fairgoers might complain about long lines at posh parties; meanwhile, Martinez—who lost a ton of work in the wake of Hurricane Maria, and created much of what’s here in the little over two months since that storm—is still committed to an exuberant aesthetic full of humor, and more than a little glitter. Messy and raw, these sculptural paintings can resemble the fallout from an explosion in a cake factory. One of the best works on view has a cheap Zara t-shirt pasted to its surface, atop which a squiggle of paint and resin as thick as a finger spells out JACKSON POLLOCK, 1953. That one will cost you $4,000; smaller compositions are available for a modest $1,500.
Scott Indrisek
Related Stories