10 Emerging Artists to Watch at Artissima

Alexxa Gotthardt
Nov 3, 2016 7:34pm
The 23rd edition of Artissima opened in Turin today. With 193 galleries from 34 countries gathering in the city’s Oval pavilion, the fair presents the opportunity to discover new artists from across the globe. Here we’ve selected 10 on-the-rise artists—from a 26-year-old video artist challenging racial politics to a sexegenarian Brazilian artist finally getting his due—who should be on your radar this week. 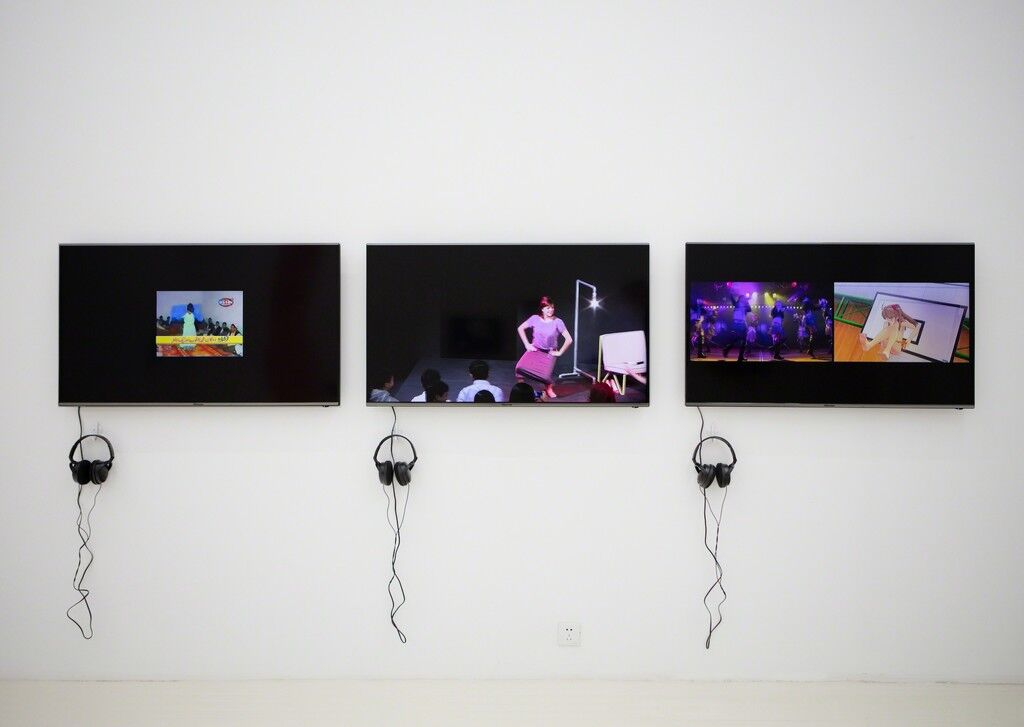 Shen Xin
Prologue, 2016
MadeIn Gallery
This 26-year-old video artist uses both found footage and original documentary to explore issues of identity politics, political protest, and marginalization of minorities—and this past year her powerful work has been recognized in solo and group shows in Great Britain and China alike. At Artissima, she unveils a new three-channel video work that is part found footage-collage, part anthropological experiment. In the films, Shen blends found footage of demonstrations, violence, and imagery depicting how marginalized peoples have been represented historically in popular culture. The videos stand alone as powerful documents of racism and resilience. But Shen further activated them by asking Tibetan Buddhist students to watch the videos, filming their reactions to the evidence of violence and suffering that had just witnessed. 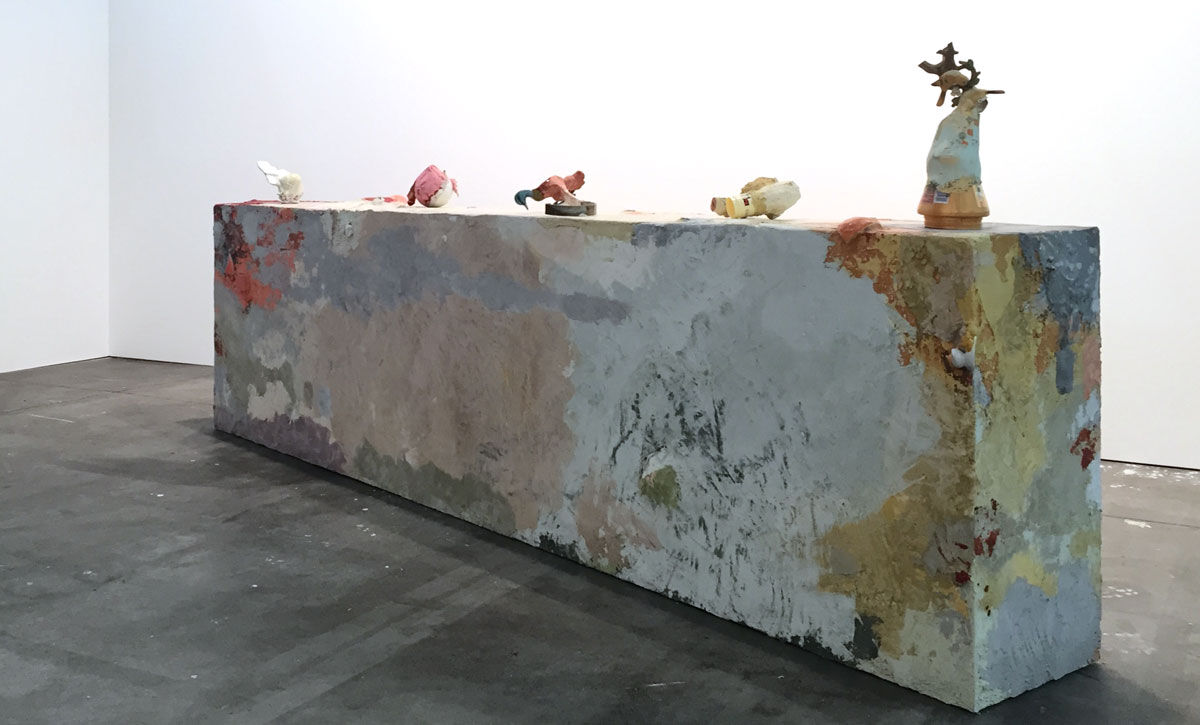 Advertisement
Ferreri, who grew up in Northern Italy and now lives and works in Turin, has worked as an art conservator while developing her art practice. So it’s no surprise that elements of her restoration expertise crop up in her sculptures, which resemble crumbling relics held together with sunset-colored plaster or sand that shimmers with quartz dust. But the real glue in her works are the found objects that they are bolstered by. “I use these everyday objects as activators of process; they give coordinates that I build the work around,” said Ferreri, who was standing among two large, new works that consumed the booth. “The final shapes derive from the dialogue between the objects,” she added. In one, titled La discesa, la forma (2016) and priced at €9,000, four found figurines sit on, and are embedded in, a long plinth resembling a low-lying wall. Other shards of found objects poke through the thickly applied plaster, in shades of blues, pinks, and yellows, that coats the piece. In this way, Ferreri’s works feel like three-dimensional palimpsests—their deepest layers pushing through to the surface like jogged memories.

On view at Artissima: Madragoa, Lisbon, New Entries, Booth 17 A 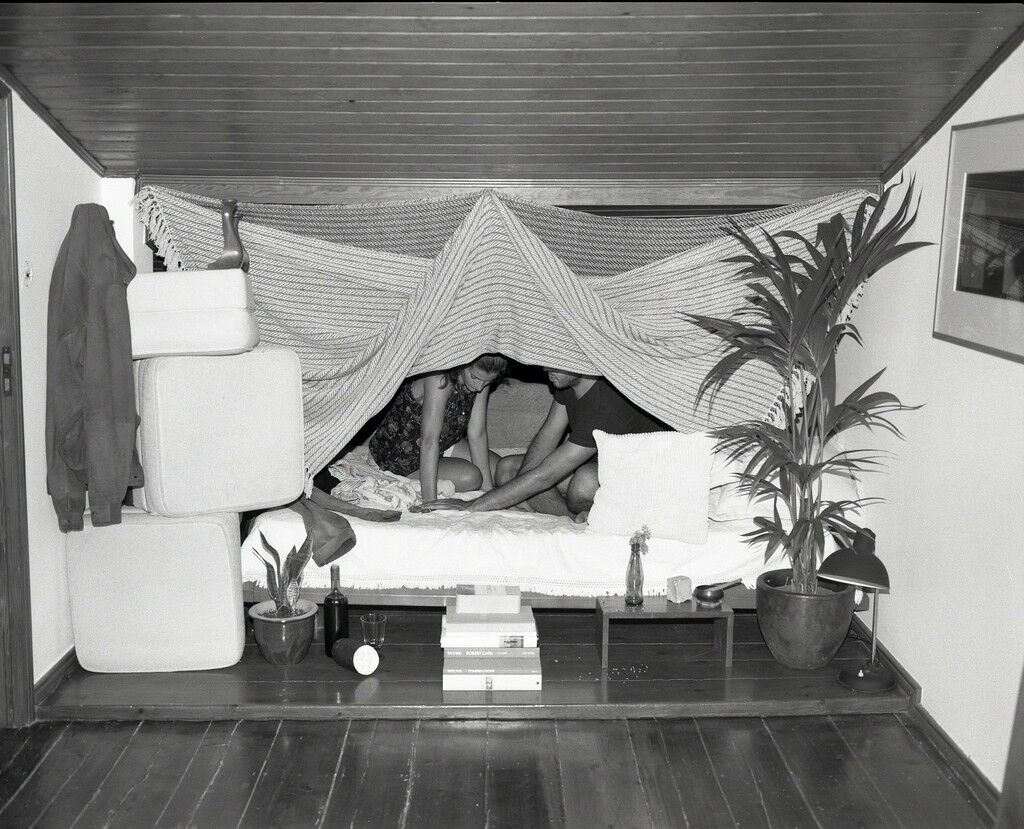 Joanna Piotrowska
Untitled, 2016
Madragoa
Piotrowska’s large-scale black-and-white photograph—depicting a man emerging from a structure cobbled together from two office chairs and a lounge-chair cushion—commands Madragoa’s excellent booth. The piece, priced at £2,200, comes from the Polish, London-based photographer’s most recent series, in which she asked adults to build forts—the kind you might jerry-rig as a child, when looking for a place to play with your imaginary friends—then photographed the creators with their new shelters. The resulting images are at once intimate and awkward, and this is the intention. “The adults are always a bit too big for the shelters,” said Galeria Madragoa founder Gonçalo Jesus. “And it raises the question of why an adult would build a shelter like this.” Looking at the images, it’s not hard to draw connections between the small, fragile forts and the images of refugee camps that flood the news of late. Another image in the booth, from an earlier series titled “Self-Defense” (2015), strikes a similar balance between intimacy and violence. In it, two young women—who are friends—are interlocked in a self-defense stance, powerfully tangling affection and aggression.

B. 1982, Dinslaken • Lives and works in Berlin and Ghent, Belgium 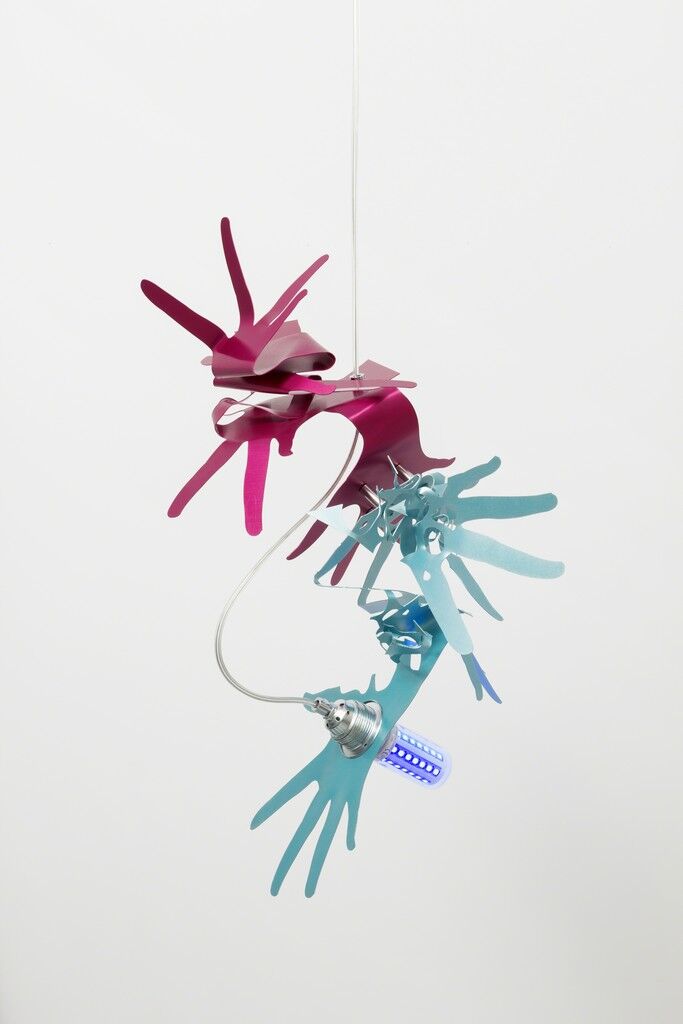 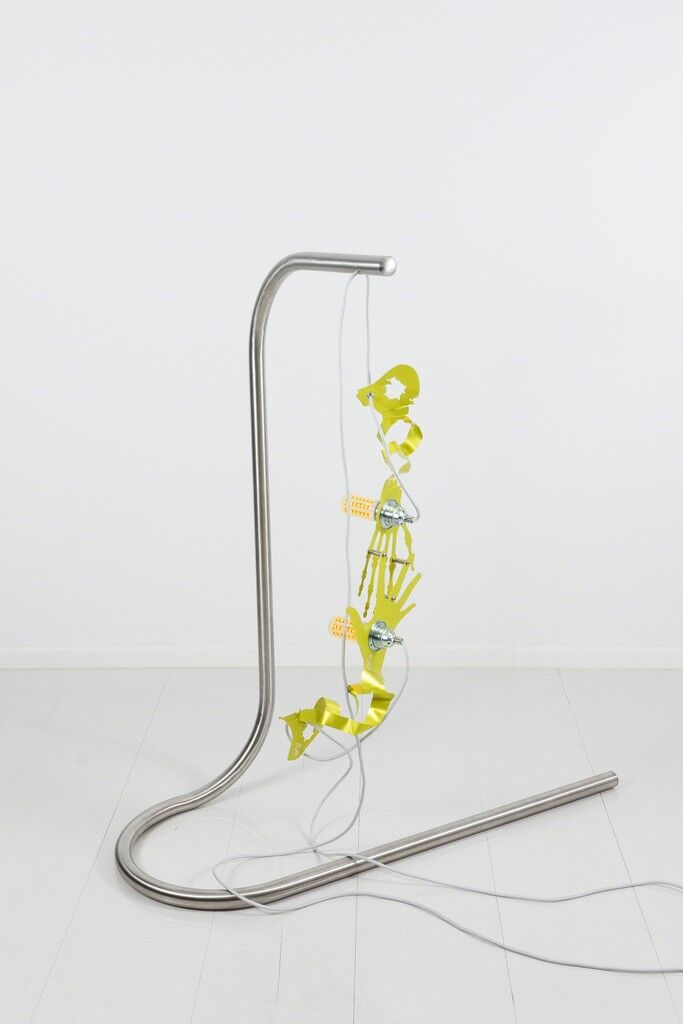 Nicolas Pelzer
Evolving Masters #6, 2016
Future Gallery
Strung up at the end of a long corridor, Pelzer’s sculptural sunlamps have a moth-to-a-flame effect. Get closer, and they become even more intriguing—the fixtures, which look like abstract tangles of metal from afar, are in fact twisting, beckoning hands. Rendered by the German artist in Adobe Illustrator, then waterjet-cut from aluminum, the sculptures are his most recent investigation into the futility of the human hand in an age where robots are increasingly subbing in for humans. “He’s interested in how we don’t make anything with our hands anymore, whether we’re artists or workers; everything has been outsourced to machine production,” said Future Gallery director Michael Ruiz. “Though he cuts them with a machine, he then bends them into unique forms so that each piece is completely individual.”
In this way, Pelzer playfully subverts the fear that our handiwork will be eclipsed by the machines we’ve created. He drives home his point by decorating the lamps with laser-cut thumbprints, alluding to both the singularity of human identity and, more cheekily, our habit of using finger swipes to access our iPhones. These works, from his “Evolving Masters” series (2015–2016; €2,500–3,500), follow other projects that track the history of innovation, building a provocative timeline between prehistoric tools, like the hand, and contemporary technological advances, like robotics. This year, the art world has begun to take notice of Pelzer’s timely, evocative practice; his two-person booth at Artissima trails group shows in Antwerp, Milan, Cologne, and Seoul.

B. 1988, Dordrecht, the Netherlands • Lives and works in Glasgow

On view at Artissima: Dürst Britt & Mayhew, The Hague, New Entries, Booth 29 A 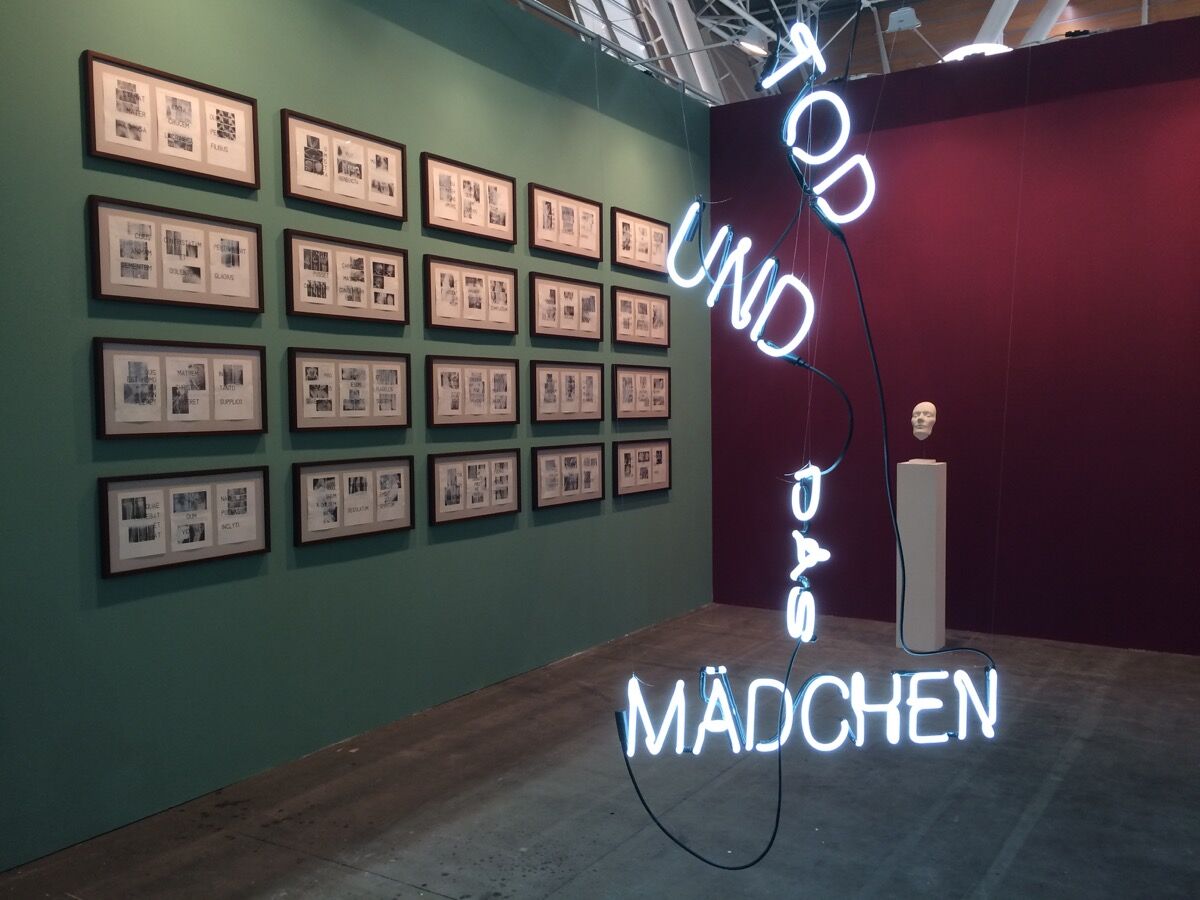 Renema, who in 2009 was the youngest artist to ever enroll for an MFA at the Glasgow School of Art, is interested in the concept of legacy. In an elegantly curated solo booth at Artissima, the up-and-coming Dutch artist packs his investigation of the topic into several arresting, highly researched works. One white bust, titled Study for the death mask of an average Romantic (2012–2014) and priced at €4,000, might look like a straightforward sculptural portrait at first glance, but it’s in fact a composite of various death masks—those of famous Romantic philosophers, writers, and musicians including Goethe and Beethoven—that Renema 3D scanned and then fused on the computer. “Renema seems to ask: What can you say about an average Romantic? Maybe he has a very big nose and some very sensuous lips,” said Dürst Britt & Mayhew’s Alexander Mayhew while pointing to different areas of the face. “But they were extremely individualistic people, and here, all individuality is removed.” In this way, Renema taps into certain ubiquitous and uncomfortable questions: Can we live on past our deaths? And, the whopper, how unique actually are we? 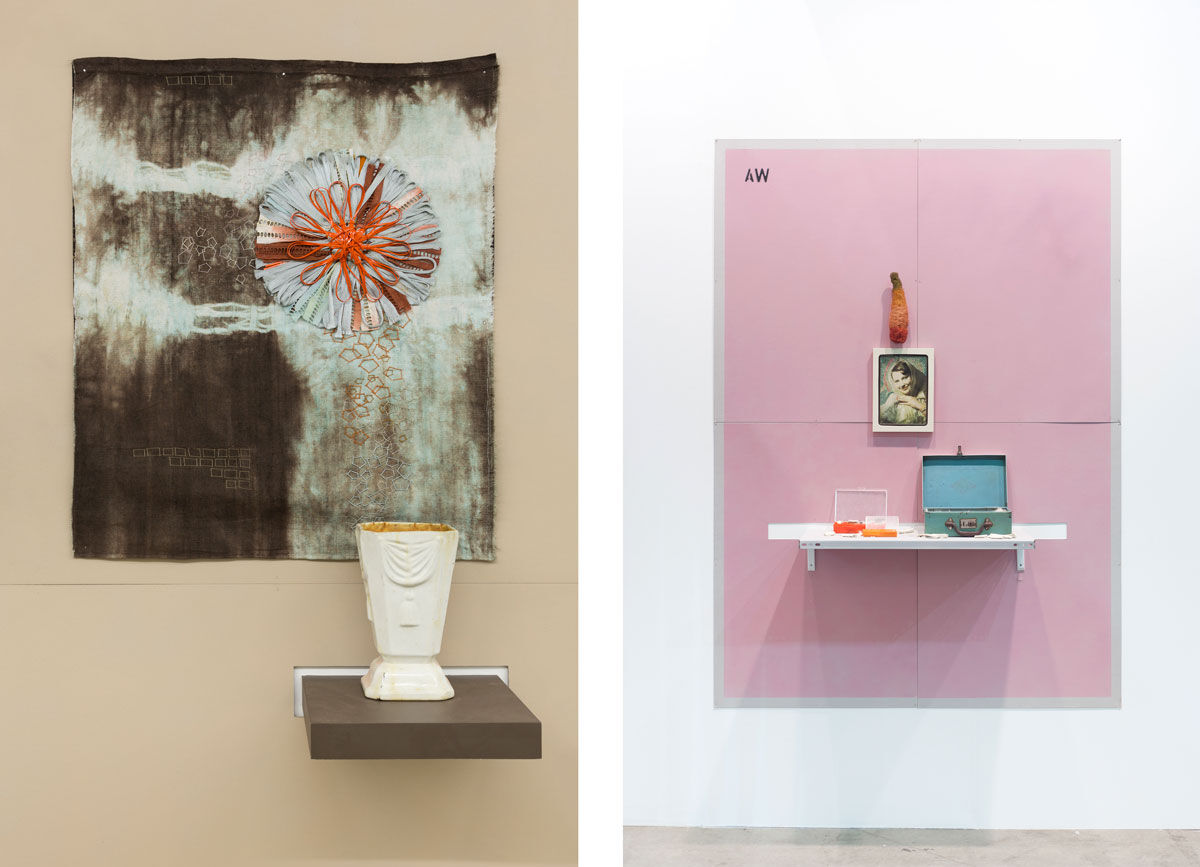 In 2012, when f.marquespenteado’s work was included in the São Paulo Biennial, he had to admit to being an artist. “By that time, he had been making work for 40 years, but he didn’t consider what he was doing an art practice,” said Mendes Wood DM’s Felipe Dmab. “It took time for him to understand himself as an artist.” But f.marquespenteado, who has used the gender-ambiguous pseudonym for many years, certainly deserves a place amongst the contemporary greats. Trained in textile and embroidery, he applies his skills to whimsical, intricate panels and sculptures that blend Brazilian folklore, original storytelling, and sexual politics.
The standout works in the booth, which best encapsulate f.marquespenteado’s complex approach and exuberant imagination, are four embroidered portraits of imagined characters, which are paired with written tales of the subjects’ travails. One, titled Olafur Erdurbjornsson, depicts (as the artist’s story tells us) a closeted perfumer who climbs mountains in an attempt to alleviate his pent-up sexual tension: “Fans of walks and tracks, Olafur climbed mountains to ease his restless, horny sexual life, effervescent and unpredictable as a volcano, yet longing for a quieter horizon to match his, otherwise, serene temperament,” reads the powerful text. We expect that more of f.marquespenteado’s labor intensive, spellbinding work—which blends inventive storytelling, portraiture, and social commentary, and which in terms of solo shows has primarily been exhibited in his native Brazil and his current home of Portugal—will continue to make its way around the world. 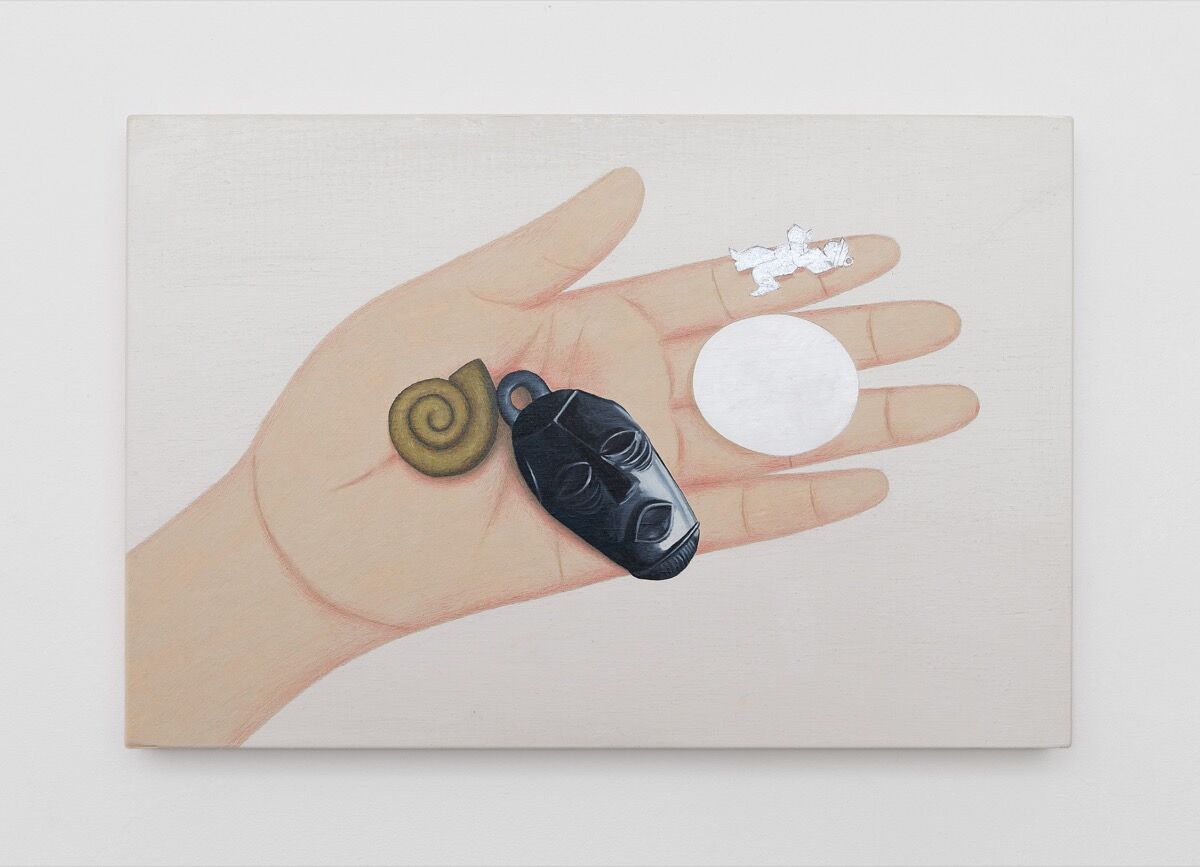 Rodrigo Hernández, We are walking together in Paris. I show you my open hand and the things I had inside my pocket, 2016. Image courtesy of P420.

Hernández, who is currently in Turin on a break from the Cité International des Arts residency in Paris, presents three small, surreal paintings in a booth swathed in gray paint. The environment is at once soothing and transportive—a fitting resting place for paintings inspired by dreams. In one, a hand holds a cohort of mystical talismans. In another, a fish ornaments a stately building. And in the third, a terra cotta dog sits in the foreground of an apocalyptic landscape. All three are the fruit of an unlikely correspondence between Hernández and a curator. When the two discovered they shared an interest in the storied Mexican muralist
Miguel Covarrubias
, Hernández began to translate the curator’s dreams about Covarrubias’ work into idiosyncratic, jewel-like paintings that fuse history, mystery, and a deep belief in art’s capacity for storytelling. 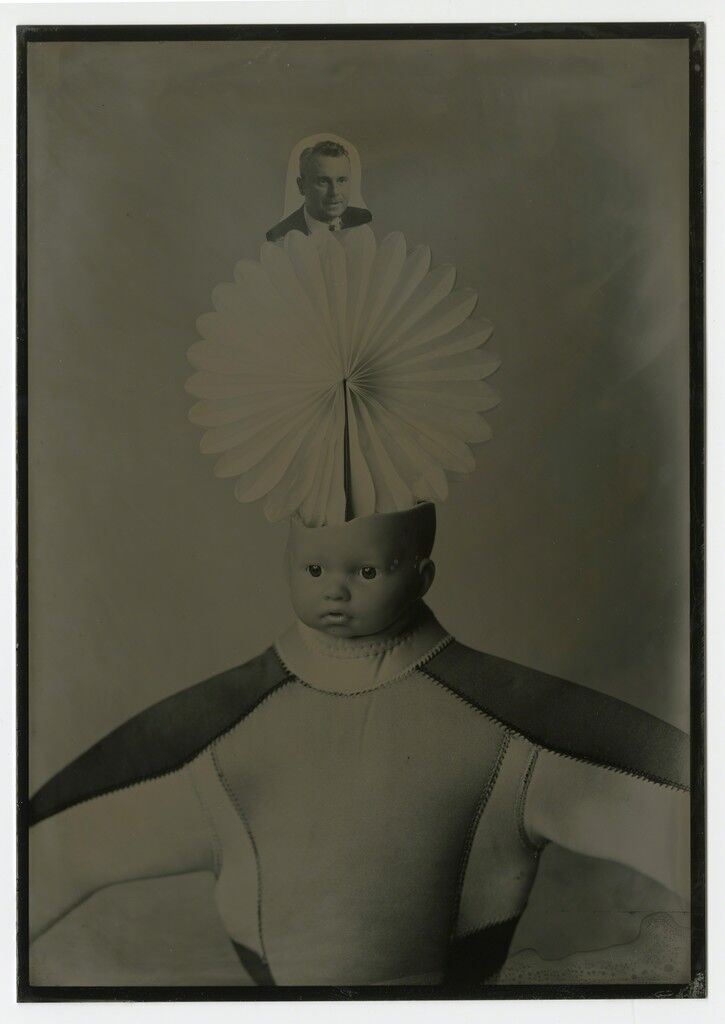 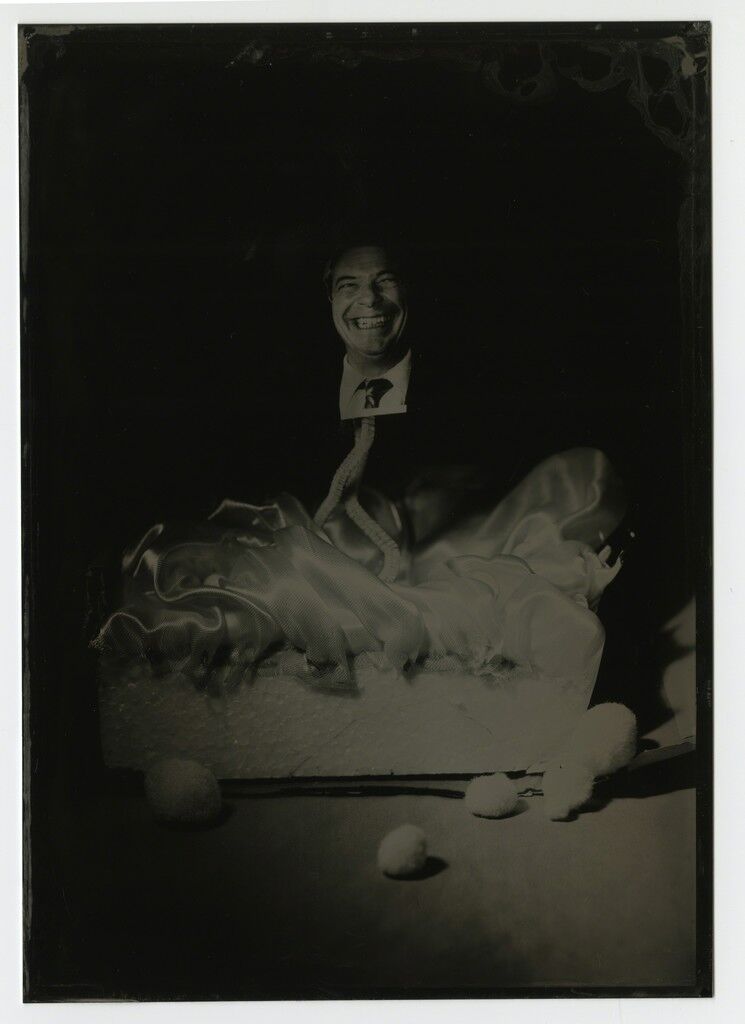 Body by Body
Zanni #6, 2016
CHÂTEAU SHATTO
New York-based duo Body by Body doesn’t shy away from the difficult—at times disturbing—political and social quandaries of our time. “They’re always trying to drill into the very urgent present with their work,” said CHÂTEAU SHATTO co-founder Olivia Barrett, standing among the artists’ latest body of work, a group of 7x5-inch tintype photographs. The series looks like it might have been foraged from the photo archives of the Met (the tintype is an early photographic process that originated in the mid-19th century). But in fact, the works are complex, politically charged pastiches that layer the faces of contemporary politicians representing the radical far-right with symbols alluding to black magic, occultism, and slapstick humor. Milo Yiannopoulos, a writer and editor for the conservative news network Breitbart, and Norbert Hofer, the Austrian president, are among the faces that make appearances across the series. Together, Body by Body’s controversial subjects, and the mysterious, supernatural landscapes that surround them, tap into a pervasive apprehension around the rise of these leaders. While Donald Trump isn’t represented, he’s certainly the elephant in the booth, given the looming U.S. presidential election. By 3 p.m. of the fair’s opening day, the entire series had sold—perhaps an indication that collectors aren’t shying away from satirical, weighty work. 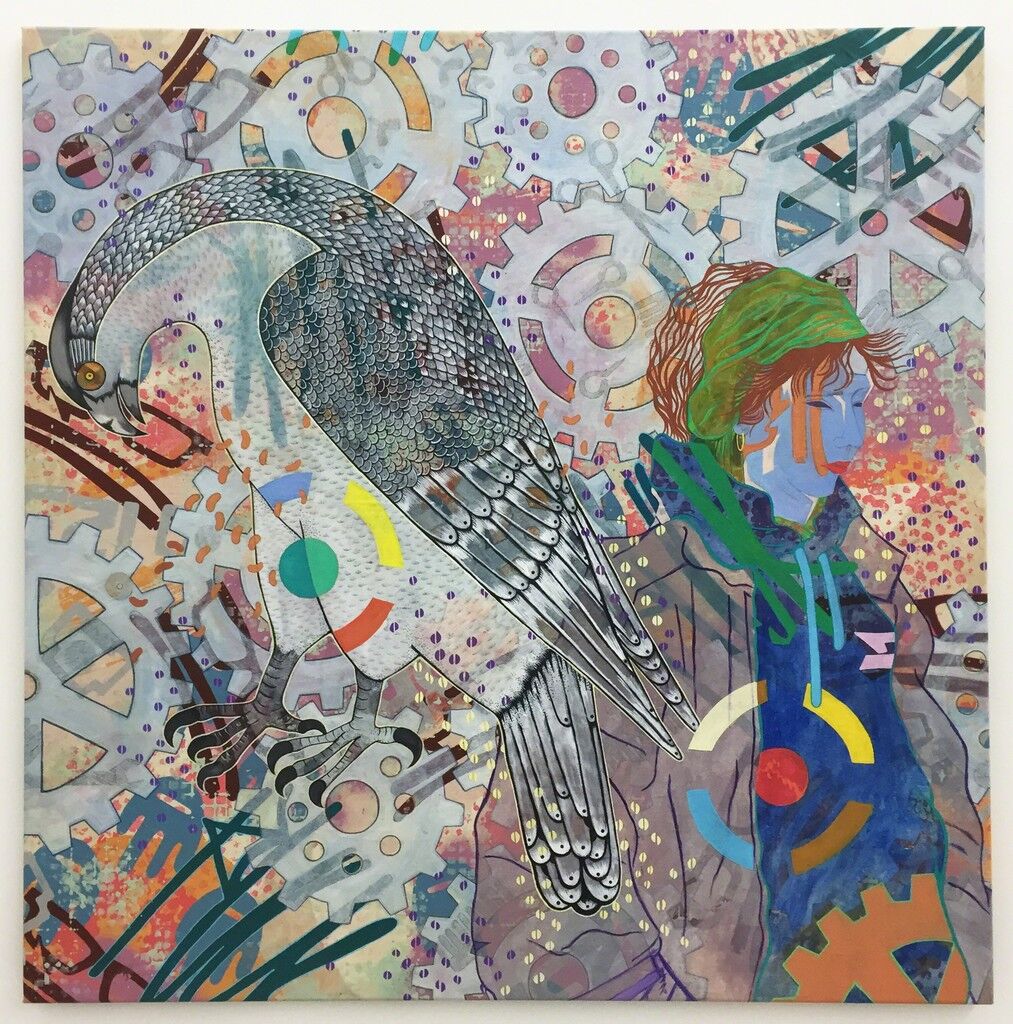 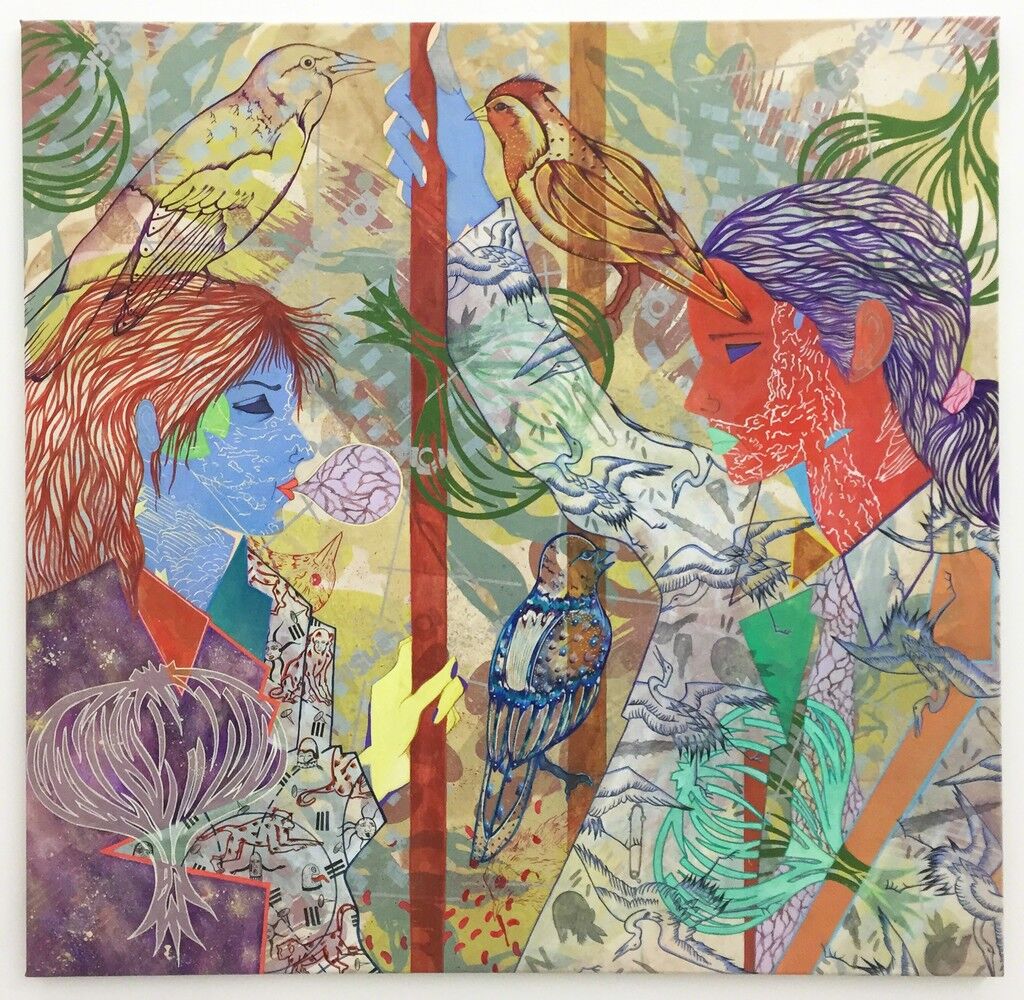 Nadira Husain
No English translation, 2016
PSM
Husain’s stunning solo booth sets her vibrant, multi-layered paintings within a brightly hued, geometric fresco inspired by Italian villa architecture. While the environment’s brilliant palette draws you in, it’s the intricate and unexpected details of Husain’s compositions (priced between €2,900–6,100) that keep you there. In this new body of work, the Berlin- and Paris-based artist blends symbols related to Italian culture, non-Western decorative painting, gaming culture, contemporary communication tools, memes—among others. In one work, No English translation (2016), a pattern inspired by the WhatsApp background plays host to two women covered in traditional Japanese motifs and Tor software logos alike.  Husain’s mashups result in kaleidoscopic canvases that refer to the daily image overload—washing over us almost unknowingly—we face as tech-savvy humans.

B. 1979, Cologne • Lives and works in Cologne and Brussels 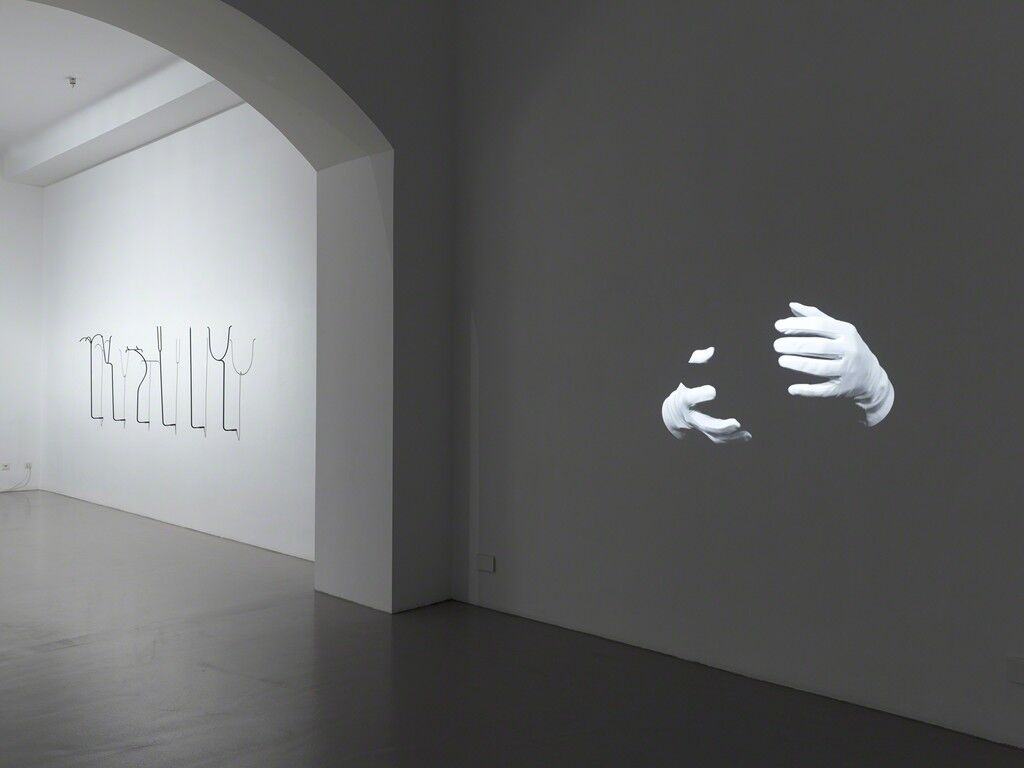 Pauline M'barek
Semiophoren , 2013
Rehbein Galerie
M’barek’s diverse practice is rooted in the dissection of art and how we present and perceive it. In her hypnotizing solo booth, three works embody different aspects of artmaking. In the first, a series of knobby vessels are the result of the artist digging her hands deep into blocks of clay, then coating the ensuing negative space in alabaster plaster. The resulting sculptures seem part ancient root system, part haggard hand—as if the product of years of working the pottery wheel. In another, M’barek transforms the stands used to buttress art objects like tribal masks into elegant “trophies” that resemble power-wielding tridents. And in a ghostly video, a pair of gloved hands hold and handle an invisible artwork. From the way the gloves shift across the screen, it’s up to us, as the viewers, to decipher what this artwork might be. The booth gives a telling glimpse into M’barek’s shapeshifting practice, albeit one that’s rooted in a serious investigation of how we look at art—whether as artists, experts, or neophytes.
Alexxa Gotthardt
Related Stories