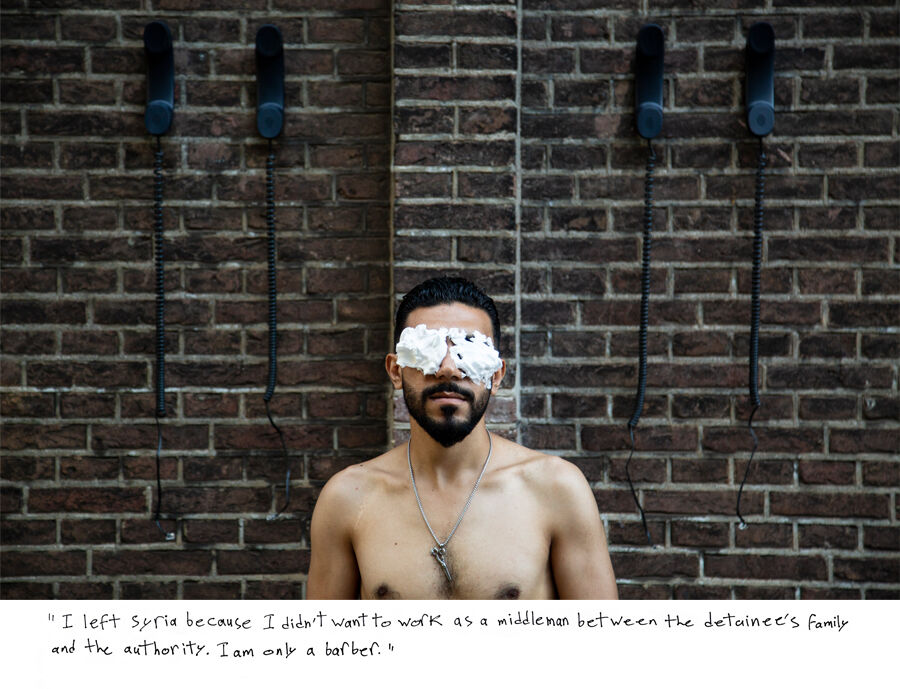 Omar Imam
Untitled [I am only a barber], 2018
Catherine Edelman Gallery
The 39th edition of The Photography Show, presented by AIPAD, features work from a roster of artists as diverse as the images they shoot. Experimental frames bump up against traditional portraiture, and subjects range from contemporary to classic, including surfers captured by teenage photographer
Joey Farrell
and black-and-white cityscapes by the late master
Walker Evans
. The pictures on view at New York’s Pier 94 April 4th through 7th offer glimpses into disparate lives, times, and modalities. You can, of course, find plenty of famous
Weegee
and
Diane Arbus
images; and when you visit,
Alec Soth
may be sitting on a couch within the special exhibition he curated, which focuses on domestic portraits and interiors. Yet we’ve rounded up 10 new discoveries—rising talents that are just beginning to infiltrate the canon. 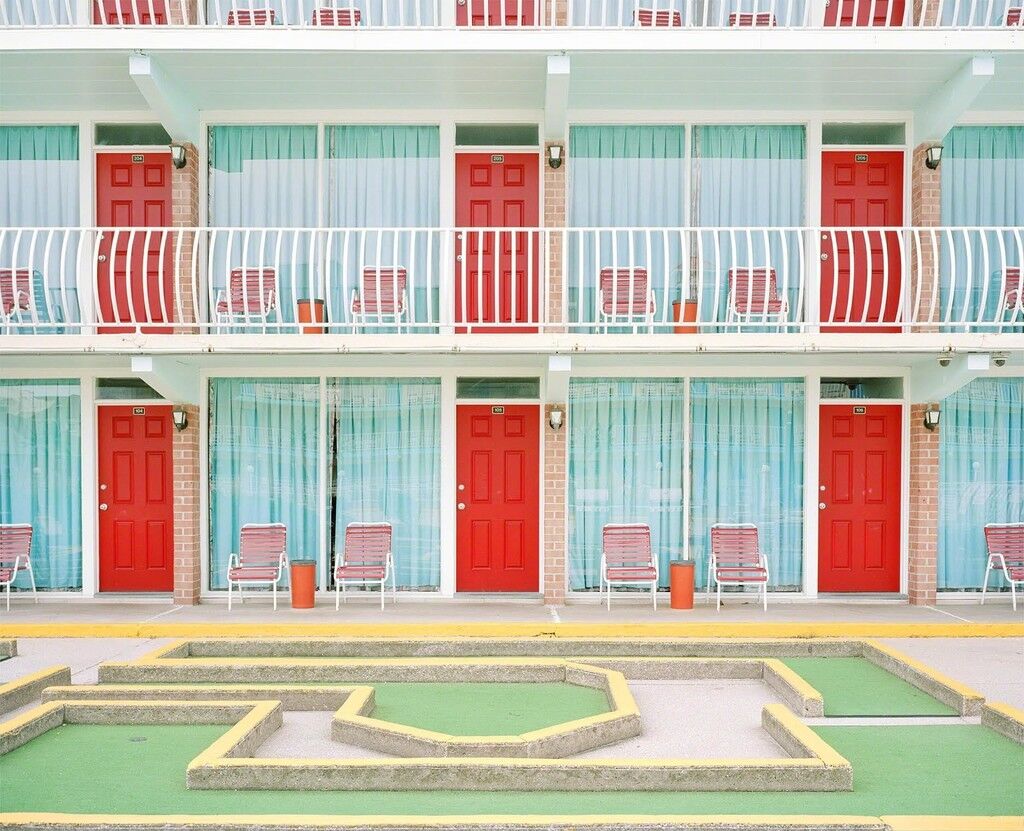 Tyler Haughey
Gold Crest Resort Motel, 2016
Sears-Peyton Gallery
The saturated hues in Garden State–born Tyler Haughey’s photographs of off-season Jersey Shore motels infuse these desolate venues with warmth and humor. The pictures look as though they could be frames from a Wes Anderson film: Haughey finds visual magic in a prosaic locale, capturing the beauty of the shore’s
Art Deco
structures in both the sun and snow. One stunning example, Gold Crest Resort Motel (2016), shows a vivid lodging façade with cherry-red doors, turquoise drapes, blindingly white railings, and a vivid green putt-putt yard demarcated by a yellow curb. Gallerist Gaines Peyton described the “box-like effect” of Haughey’s images: From her perspective,they become an “extension of the architecture,” as the pictures evoke both painterly geometric abstraction and
Joseph Cornell
’s famous boxes. 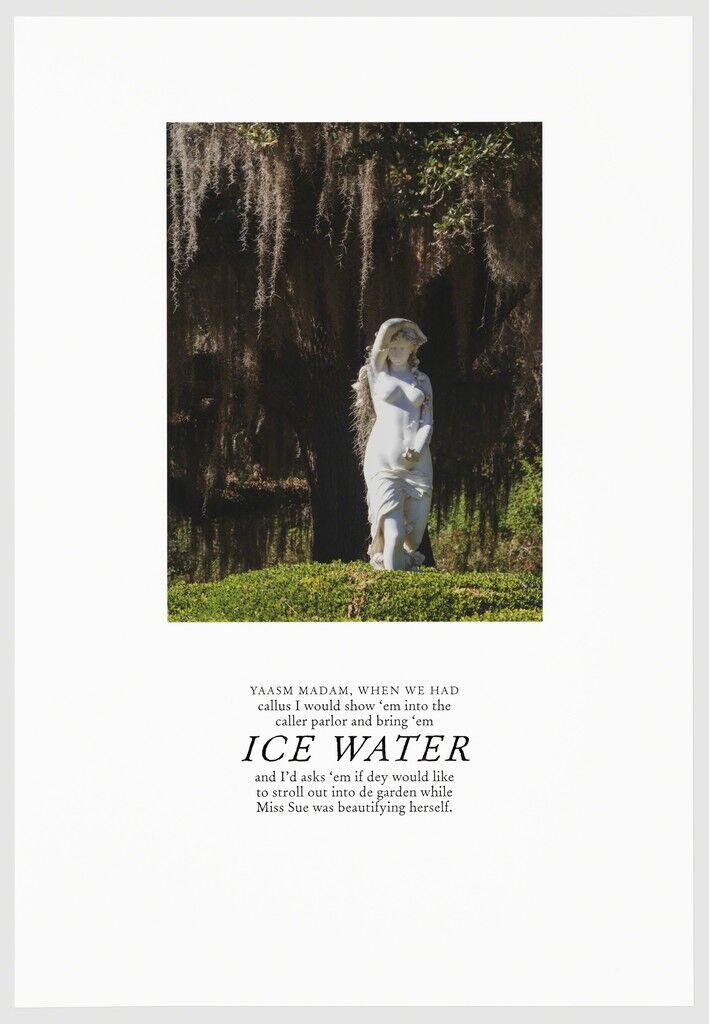 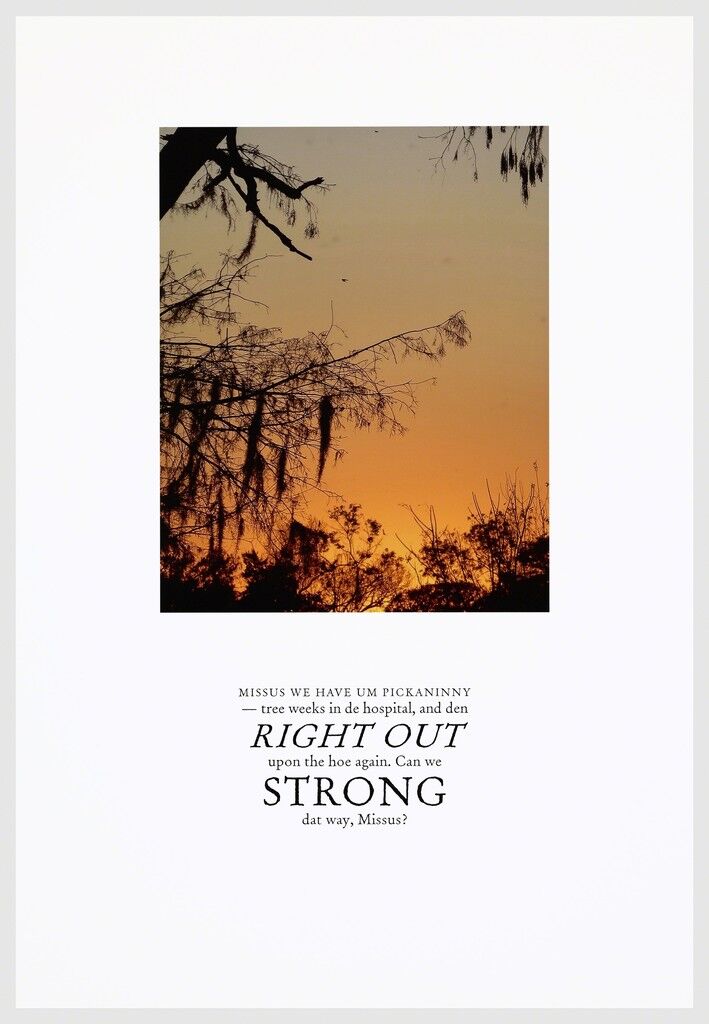 Keris Salmon
STRONG, 2016
Arnika Dawkins Gallery
Advertisement
After an illustrious career producing for Dateline, MSNBC, and National Geographic, Keris Salmon turned her storytelling drive toward photography. For her 2016 series “We Have Made These Lands What They Are: The Architecture of Slavery,” Salmon traveled to southern U.S. plantations and captured details large and small—a bannister, a bird, wooden slats, a columned façade, branches in sunset—from past sites of slavery. Using letterpress on cotton-rag paper, she paired the pictures with texts from old diaries and books about antebellum America. Some disturbing juxtapositions result.
In one work, Sugar (2016), Salmon situates a picture of a dark tree with text that reads: “The girl that mixed the poison with the / SUGAR / is one that Mr. Doherty had / lately bought. She is about / FOURTEEN / years old. She acknowledged the act / and said she done it to kill the cook woman.” Gallerist Arnika Dawkins believes that through uniting her imagery with appropriated text, Salmon creates an “alternative reality.” The new tales unite present beauty with past horrors, a dialectical opposition that produces moving new artworks. For the series “Mining and Exodus in the Atacama Desert. Bolivia-Chile” (2015–18),Chilean photographer Marcos Zegers turned his lens on land ruined by unregulated lithium mining in his home country. In one image on view at Augusta Edwards’s booth, a basketball hoop stands on spindly red-and-white legs in the middle of an empty desert. The barren landscape gives the photograph a surreal tinge, as does the notion of an energetic game in such a desolate spot. It’s impossible, at first glimpse, to tell what havoc various corporations have wreaked on the land—the beautiful image only slowly gives way to a sense of starkness and environmental tragedy. “He obviously has an artistic aesthetic,” said Edwards. “I think he picks out elements in the environment that are quite artful and don’t so much focus on the devastation of the land.” 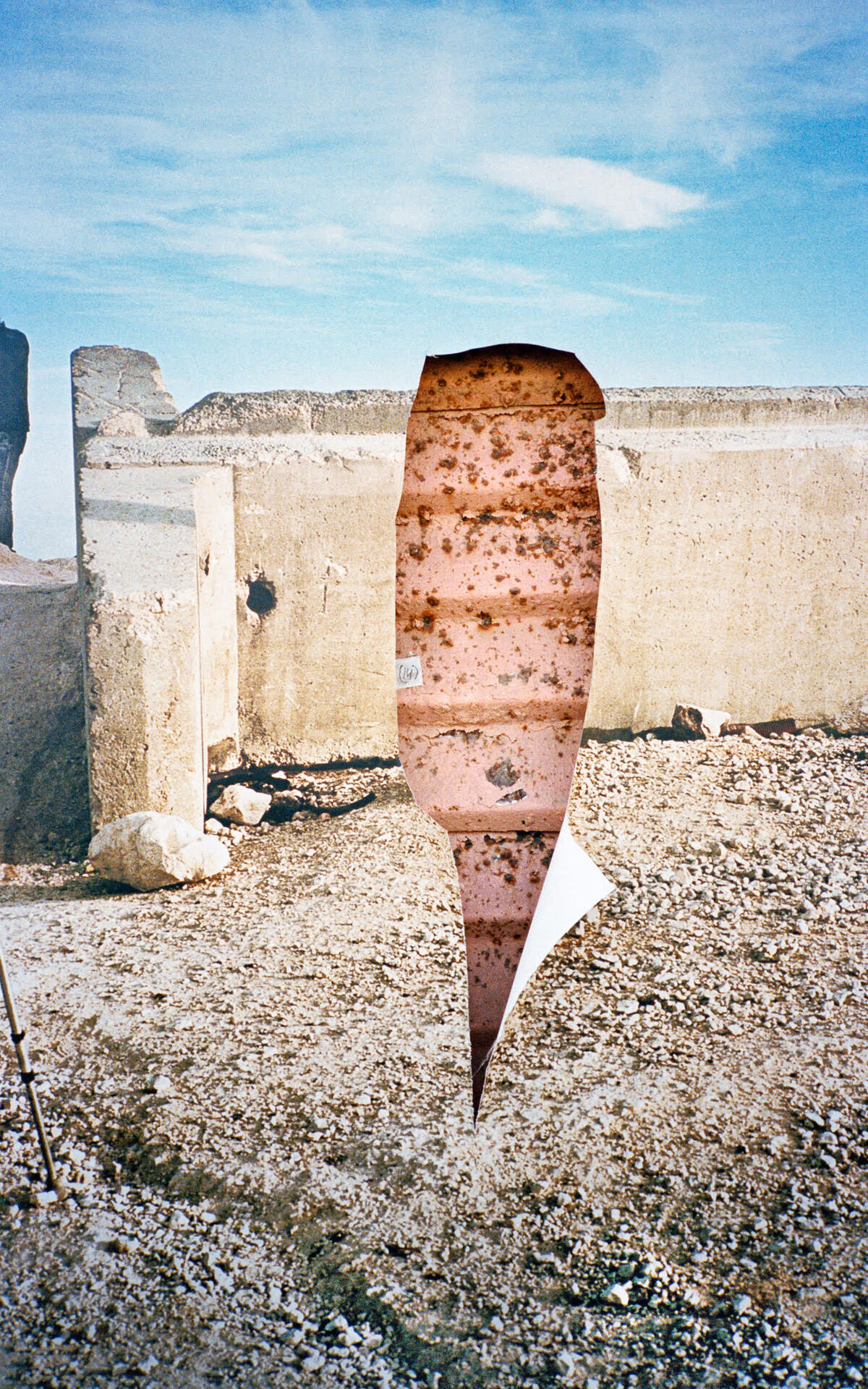 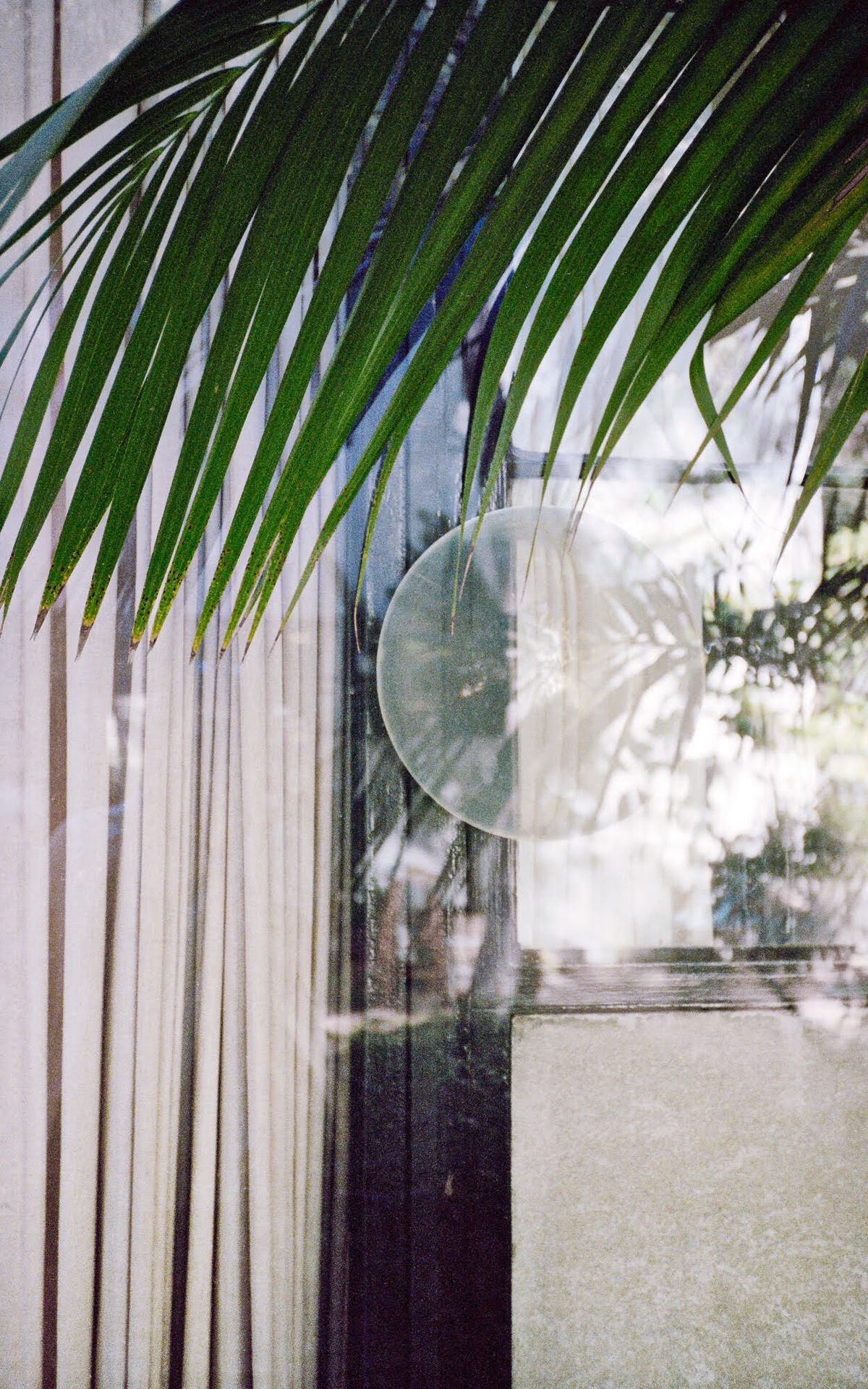 The granddaughter of Israeli diplomat Abba Eban, Brooklyn-based photographer Yael Eban takes pictures that reference her family’s homeland, as well as her own transnational journeys, while also boasting bright, lush surfaces. Her new series, “Is and Isn’t”(2017–18),features rocks, beaches, palm leaves, and fountains—with many images containing an optical trick. In one representative shot, Eban captures a crumbling yellowish wall, a craggy ground, and a soft blue sky. Yet in the middle of the composition, a tear reveals a rusting pink layer underneath. The seam suggests buried histories and multiple levels of truth and fiction. According to gallerist Katrin Weber, the pictures are an exploration of color. She added: “You’re seeing forms [and] shapes, and being reminded of this kind of fleeting [feeling]that you get when you experience a place.” 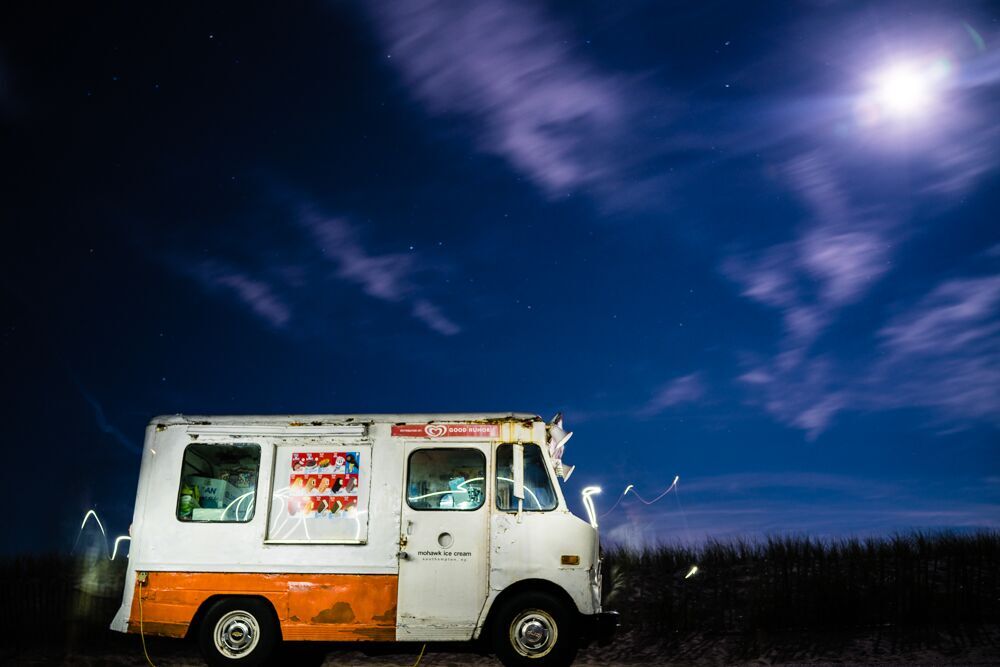 In 2018, Joey Farrell gained renown at just 17 years old for pictures of his high-school friends in the Hamptons. Last August, when Farrell was a rising senior, Southampton’s MM Fine Art Gallery presented Farrell’s first solo exhibition, entitled “Seventeen.” The works on view at that show focused on Hamptons beaches, surf and skate culture, and youthful mischief: a chair sunk in a pool; a kid climbing through a hole in a concrete wall. At Pier 94, Gary Edwards presents Mother’s Day, Montauk and The Ice-Cream Truck (both 2018). In the former, a gray ocean stretches across the bottom of a mostly white scene. Black-and-white dots emerge from the waves—Farrell’s friends, ostensibly. “It’s a great picture of young people,” said Edwards as he noted the high demand for the work, which evokes a sense of nostalgia. 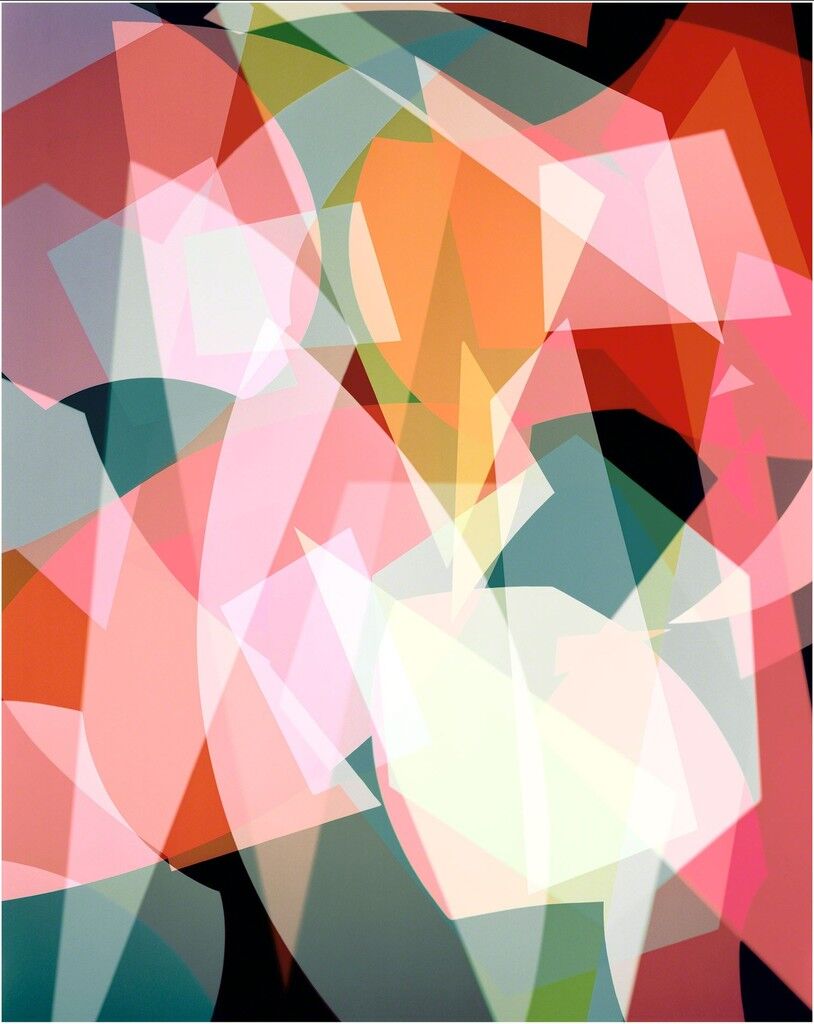 Niko Luoma
Adaptation of 'Les Demoiselles d'Avignone' by Pablo Picasso, 1907, 2017
Bryce Wolkowitz Gallery
In his “Adaptations” series, which he began in 2015,Niko Luoma photographs light and light-sensitive materials (such as paper) to generate geometric compositions that riff on art-historical masterpieces. Self titled adaptation of The Young Ladies of Avignon (1907) (2015), for example, remakes
Pablo Picasso
’s iconic harbinger of modernism, recasting the five nude women as overlapping, pointy pink shapes. The flatness and lack of recognizable objects in Luoma’s work conflates painting and photography, employing what gallerist Amanda Wilkes called “his own language of light.” Self-titled Adaptation of Peter getting out of Nick’s Pool (1966) Version II (2018), which reinterprets a famous
David Hockney
canvas, offers a less abstract scene: The viewer can clearly make out a pool, a window, and a floating circle that resembles an eyeball. 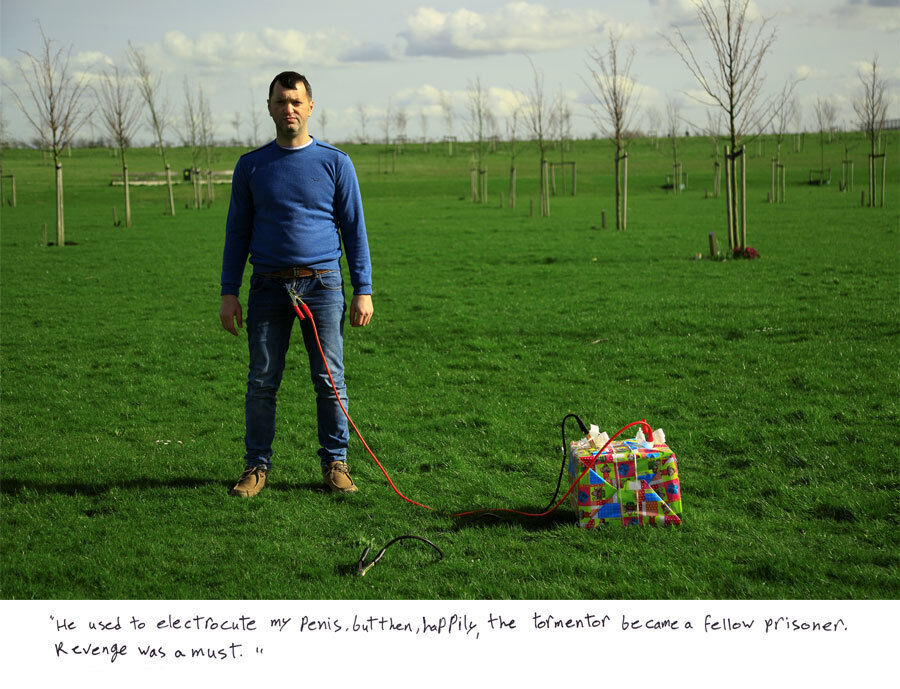 Omar Imam
Syrialism, 2017
Catherine Edelman Gallery
In 2012, photographer Omar Imam was captured and tortured in Syria (he still doesn’t know by whom). Upon escaping, he felt compelled to make work about such excruciating experiences—though he chose to focus on the plight of refugees, not his own personal tribulation. His 2015 series “Live, Love, Refugee”documents refugees not as news items or faceless masses, but as individuals with their own relationships, histories, and dreams. For the more recent body of work,“Syrialism” (2017–present),Imam held extended dialogues with Syrian refugees and paired scrawled text from those conversations with his images. In one photograph, Untitled, [I am only a barber] (2018), a barber appears shirtless, with shaving cream over his eyes. Beneath him, text reads: “I left Syria because I didn’t want to work as a middleman between the detainee’s family and the authority. I am only a barber.” 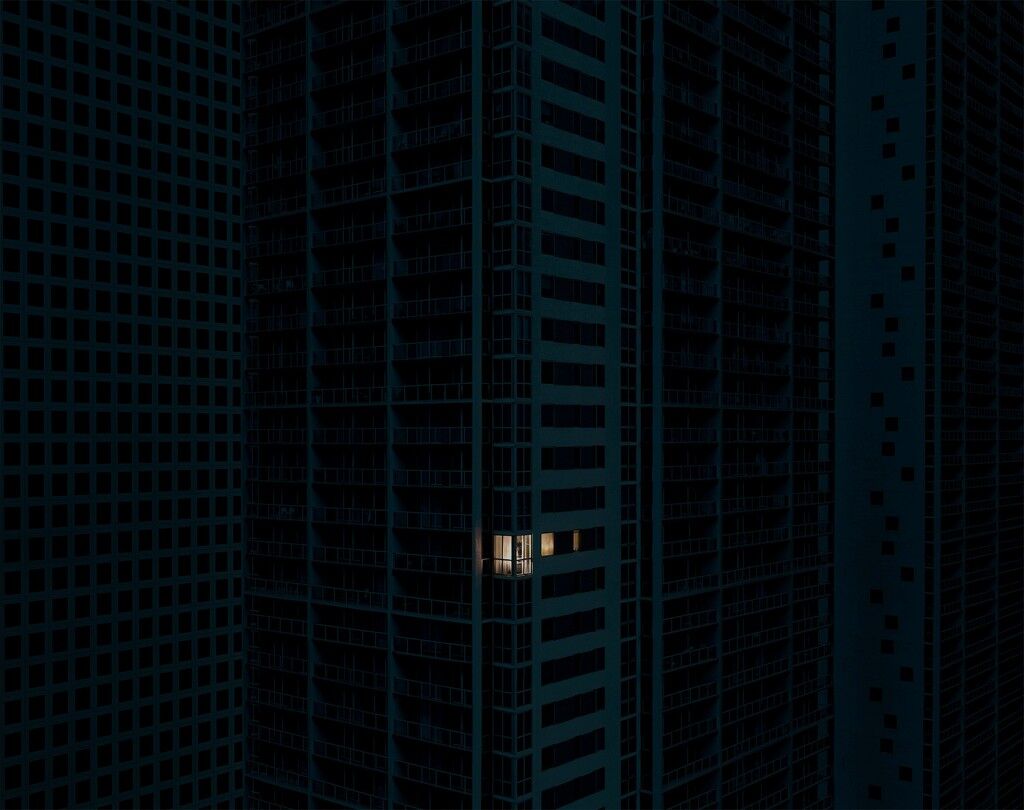 Aristotle Roufanis
Alone Together VIII, 2017
Momentum Fine Art
When Greek photographer Aristotle Roufanis lived in London, he was lonely. “It’s an epidemic nowadays, social isolation,” he said. But his feeling of alienation became a conduit for an evocative series, “Alone Together” (2016–present). For the series, Roufanis took thousands of pictures of the British metropolis from sunrise to sunset over multiple evenings, then spent six months stitching together new compositions. The results show high-rises that are mostly dark, except for one or two illuminated windows. The work recalls
Stan Douglas
’s recent “Blackout” series (2017)—it’s similarly haunting and cinematic. 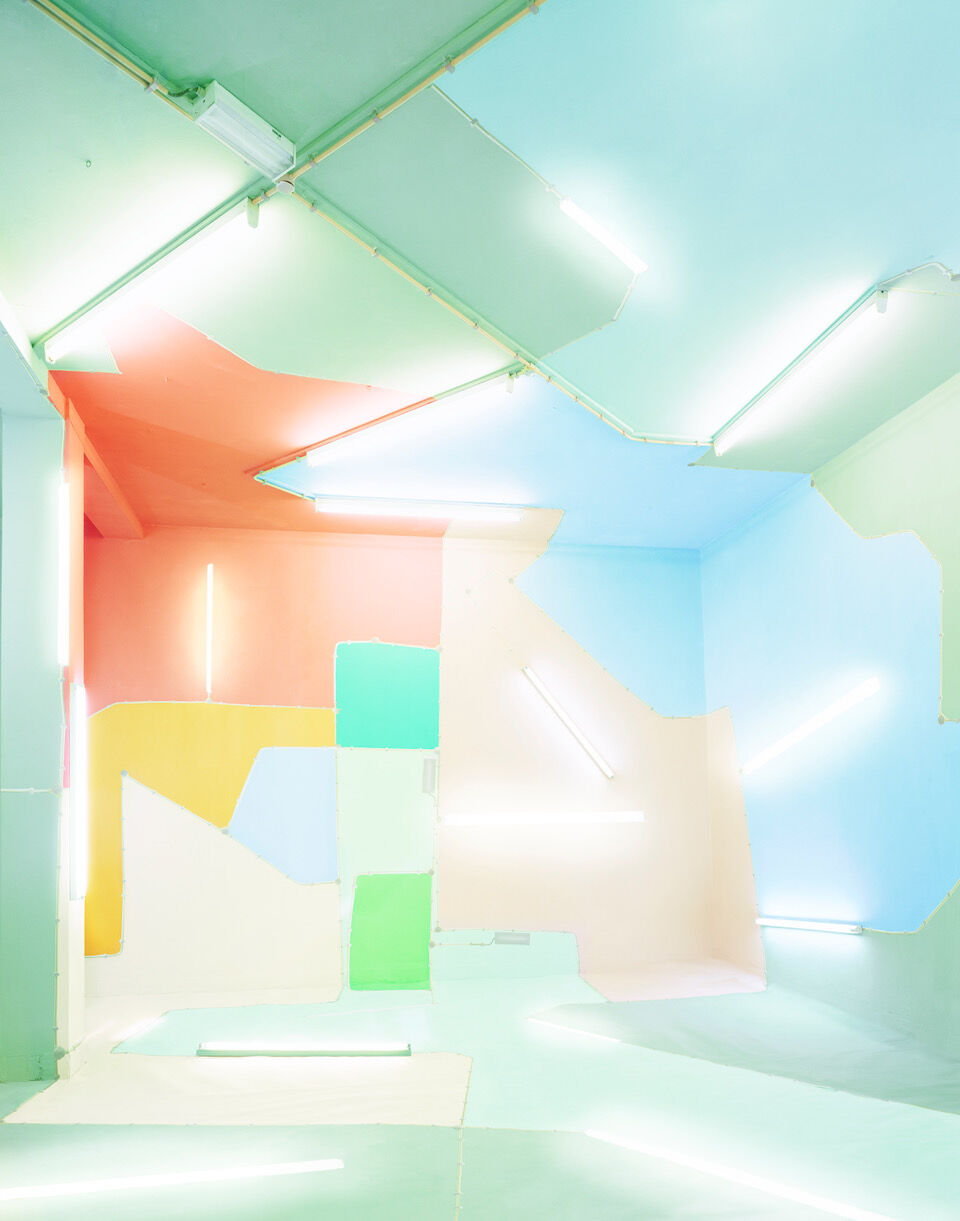 According to gallerist Sylvere Azoulai, Dutch photographer Marleen Sleeuwits is “more like a three-dimensional artist.” Before she ever fires her shutter, Sleeuwits builds colorful, light-filled installations in abandoned office buildings. When she finally shoots the space, she’s not just documenting an architectural intervention, but producing a new optical treat. Interior #53 (2019), for example, first appears to the viewer as a collage of pastel shapes—green around the edges, with yellows, pinks, and blues inside. Upon a closer look, the print reveals itself to be an interior shot: Sleeuwits painted the room with blocks of color and hung long, glowing lights at odd angles to form the scene. The work conjures settings akin to pop-up spaces that are meant to be photographed for Instagram—in Sleeuwits’s work, the polished photographs trump the experience of the sites themselves. 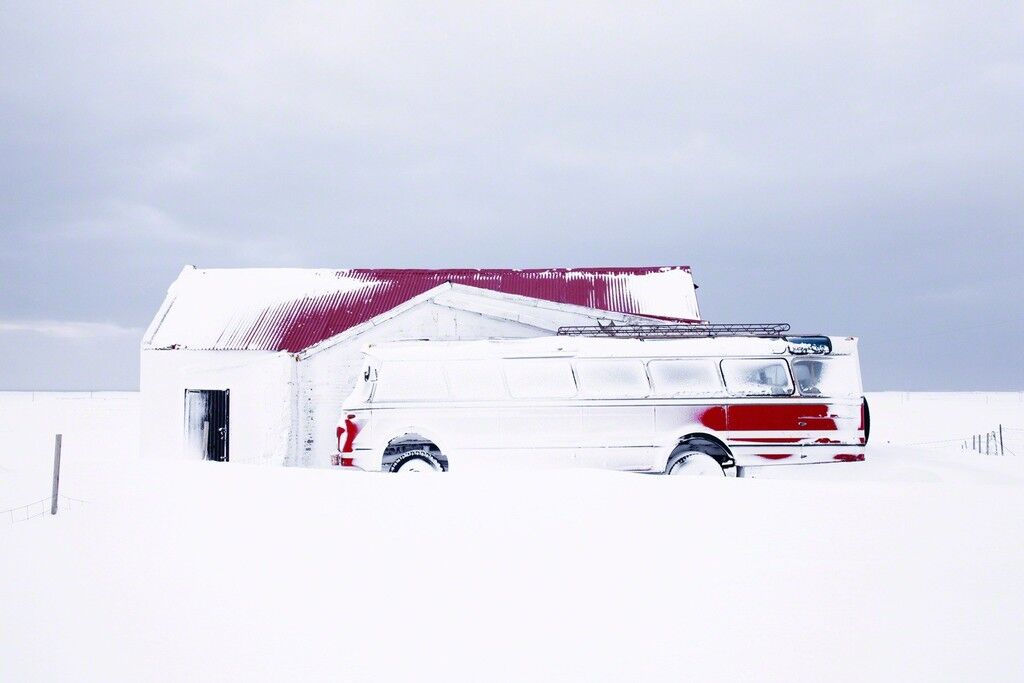 Maroesjka Lavigne
Autobus, On the Road, 2012
Robert Mann Gallery
Though Maroesjka Lavigne’s 2012 work Autobus, On the Road pictures a treeless, snow-bathed landscape, its brilliant hues save it from austerity. There’s a neat symmetry to the work, with a pink rooftop and red bus jutting just past each other, both covered in a layer of white powder. The dusty white sky is a lush, purplish blue at the edges. “She has a very unique way of visiting a location and capturing it,” said gallerist Robert Mann, who first found the young Belgian artist’s work in Foam Magazine in 2012. Autobus, On the Road hails from Lavigne’s body of work devoted exclusively to Icelandic landscapes. In the years since, she’s also documented such far-flung locales as China, Chile, and Namibia.
Alina Cohen
Related Stories