Nate Freeman and Alexander Forbes
Jun 12, 2018 12:05pm
Art Basel in Basel kicked off on Monday with the opening of Art Basel Unlimited, the fair’s section for museum-scale installations, located this year on the upper floor of Messe Basel’s Hall 1. Seventy-two presentations have been mounted for this seventh edition of Unlimited, with Hirshhorn Museum and Sculpture Garden curator-at-large Gianni Jetzer at the helm.
Works here span from historical pieces like
Bruce Conner
’s 1966 video BREAKAWAY to pieces fresh from the studios of
Sam Gilliam
and
He Xiangyu
. While Unlimited has traditionally focused on large-scale sculpture and installation, there has been a steady rise in the amount of video presented in the section. That shift continues this year, with many of the strongest works—including five of our 10 must-see picks—playing out on screens in darkened rooms. 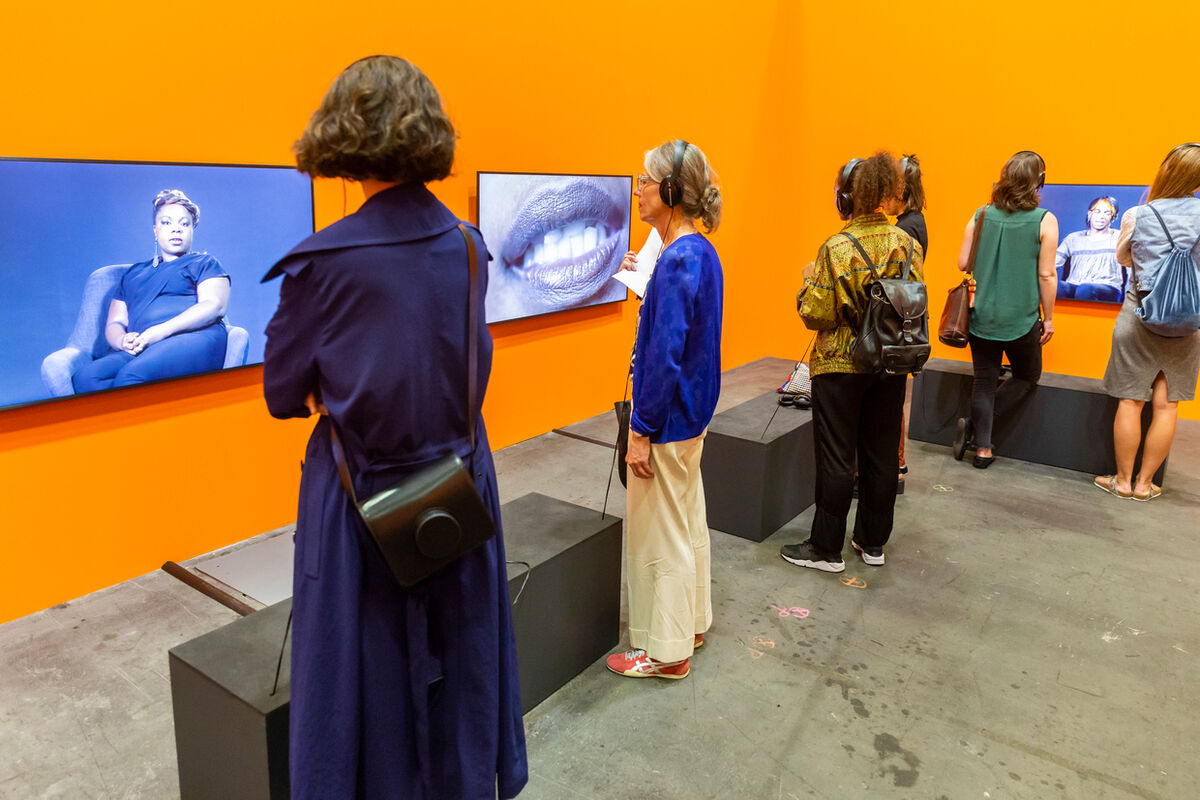 Candice Breitz
quickly became a talk of last year’s Venice Biennale for her film Love Story (2016), featured in the South African pavilion. In it, Alec Baldwin and Julianne Moore acted out interviews Breitz had conducted with six refugees, each of whom had fled conflict or persecution in their home countries. TLDR, which debuted at the B3 Biennial of the Moving Image last year, is the sequel to that film, and focuses on a group of sex workers in Cape Town who are members of the nonprofit SWEAT (Sex Workers Education & Advocacy Taskforce). As with Love Story, TLDR is split into two rooms. In the first, three screens project a musical production in which the sex workers have been cast (it plays hourly, on the hour); in the second, we find candid conversations with 10 of the cast members.
In one of those interviews, Zoe Black, a self-described “migrant sex worker and activist and everything else,” tells the story of what attracted her to her occupation. Her reasons are more in line with what you might expect from Uber drivers and other participants in the so-called gig economy: “flexible hours, you don’t have a boss.” She advocates for sex work to be decriminalized and looked at like any other kind of labor, and also addresses a core theme that pervades TLDR just as it did Love Story: that migrants, whether due to a lack of information before they leave or discrimination when they arrive, often fail to realize the promise that migration was supposed to fulfill. 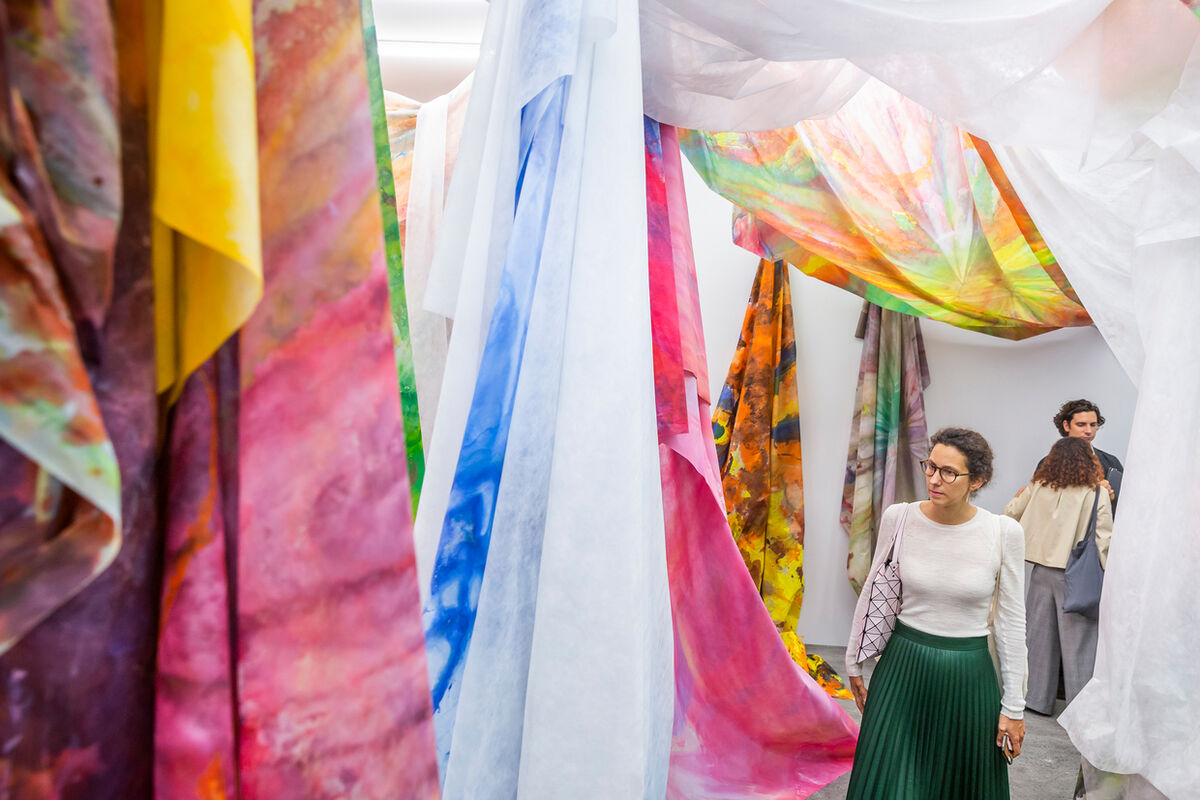 Advertisement
By the time Unlimited held a preview for VIPs Monday, it became clear that few artists in Basel this year would have the visibility of
Sam Gilliam
. The 84-year-old
Abstract Expressionist
has one of the most talked-about exhibitions in town, “The Music of Color,” a retrospective that brings 45 works to the Kunstmuseum Basel and generated a vigorous buzz after opening Saturday.
And one of the more engrossing booths at Unlimited is a new Gilliam work presented by David Kordansky—the Los Angeles dealer who began showing work by the seminal African-American painter after he and the artist
Rashid Johnson
, who shows at the gallery, realized they shared a love for the then-forgotten artist. That piece consists of 30 unstretched paintings draped from the walls of the booth, or from the ceiling and onto the floor. The color-streaked acrylic-on-Cerex nylon takes over the room, creating mazes for viewers to walk through, a tightly contained experience in a small booth that has just as much power as the larger work elsewhere at Unlimited. 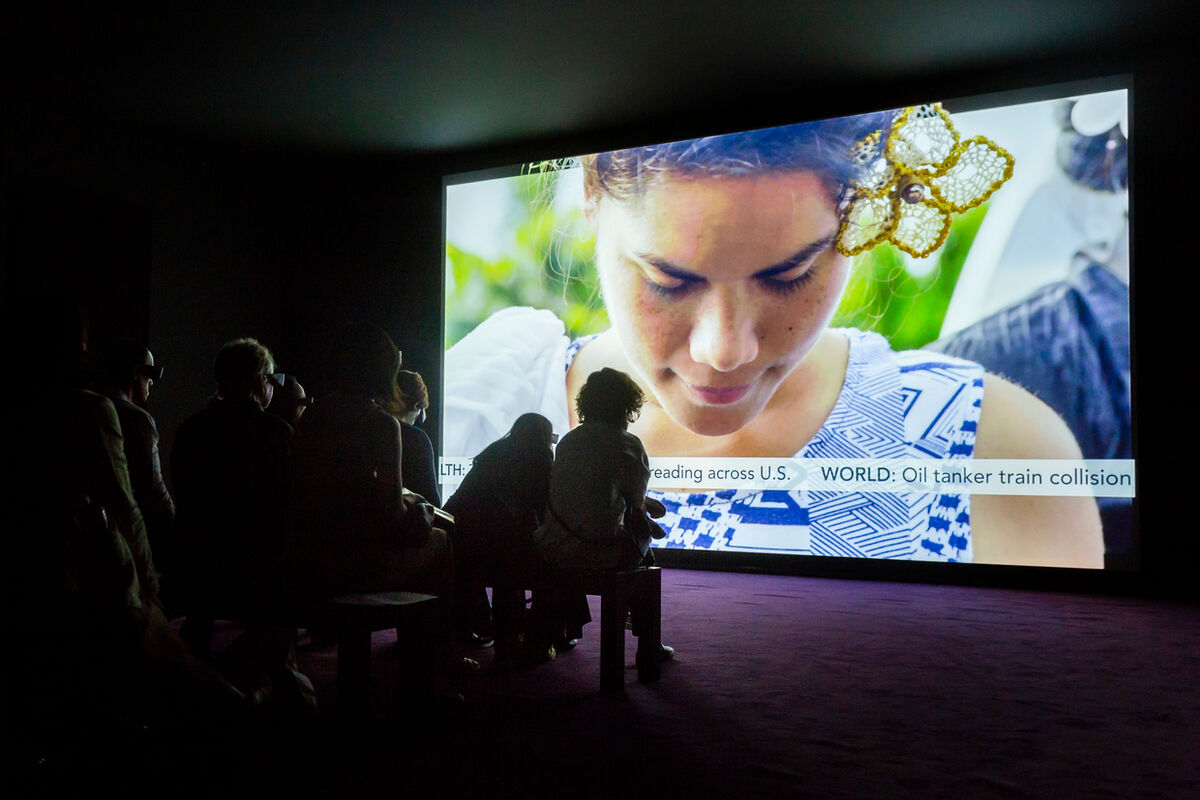 Saturday debuted at
Camille Henrot
’s much-talked-about Palais de Tokyo survey last fall—and its reprisal at Art Basel should be welcomed by those who couldn’t make it to Paris. The roughly 20-minute-long 3D film throws viewers into the rituals of the Seventh-day Adventist (SDA) Church, known for baptizing its members by fully immersing them in water and for worshiping on Saturday rather than Sunday.
The footage cuts from singing congregations to baptism ceremonies held at the ocean, or in a specially-designed tub; we watch person after person get dipped backwards, holding their nose, held there briefly under the water by the pastor. Meanwhile, a news ticker at the bottom of the screen calls out various, often violent happenings of that Saturday. The work joins Henrot to the number of artists currently using religion and ritual as a filter through which to understand and unpack the rapid flow of often-negative information flying at us every day. 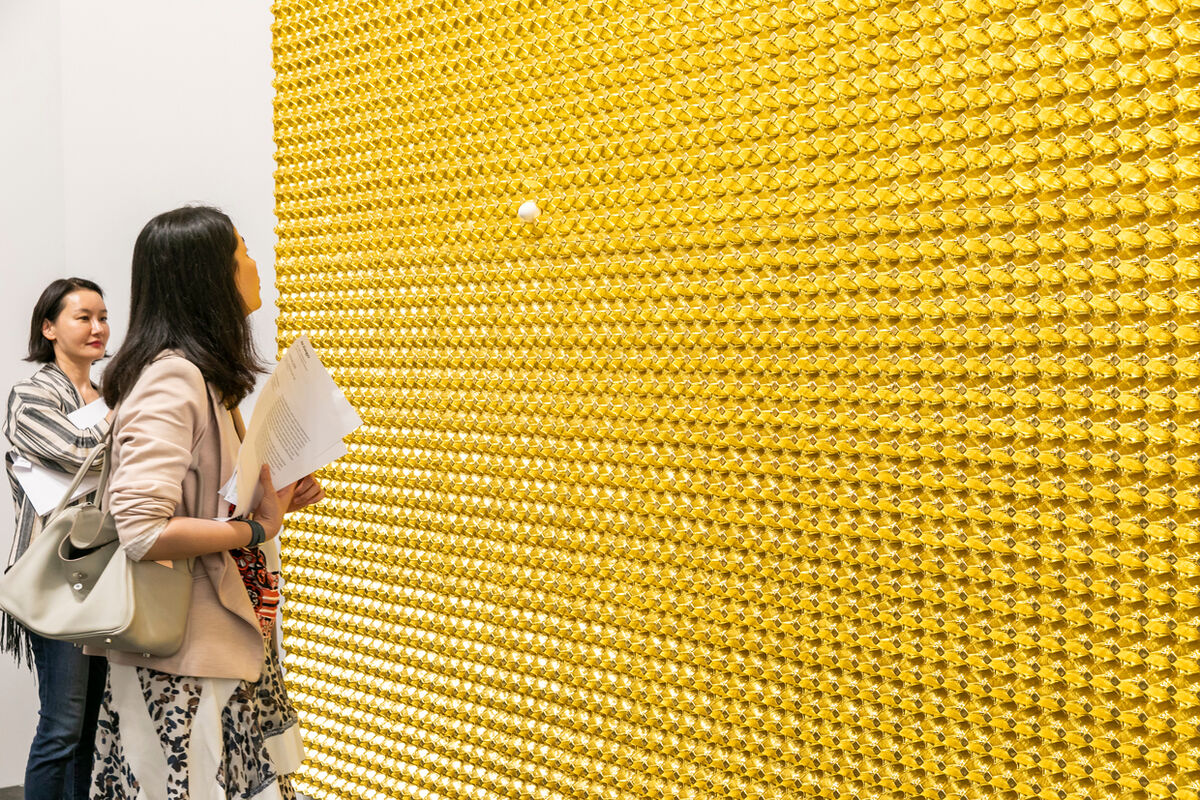 A small photo of a boy, perhaps five years old and standing in the middle of Tiananmen Square, is tacked up on the left wall of
He Xiangyu
’s installation with a pencil line drawn on the wall just above the photo’s top edge. The boy is, in fact, the artist himself, and the line marks his height at the time the photo was taken; it’s joined by three other photos taken at various other stages (and heights) of his childhood.
These humble remnants of He’s youth stand in stark contrast to the enormous, square egg carton made of 3,500 grams (about 7.5 pounds) of pure gold, which itself holds just one actual egg. The work is a surprisingly impactful allegory for China’s one-child policy, which began in 1979 just as the country began opening up to the West, and was only rolled back three years ago, in 2015. The policy heavily influenced the social dynamics of He’s generation—the artist was born in 1986—which was simultaneously experiencing historic economic growth. 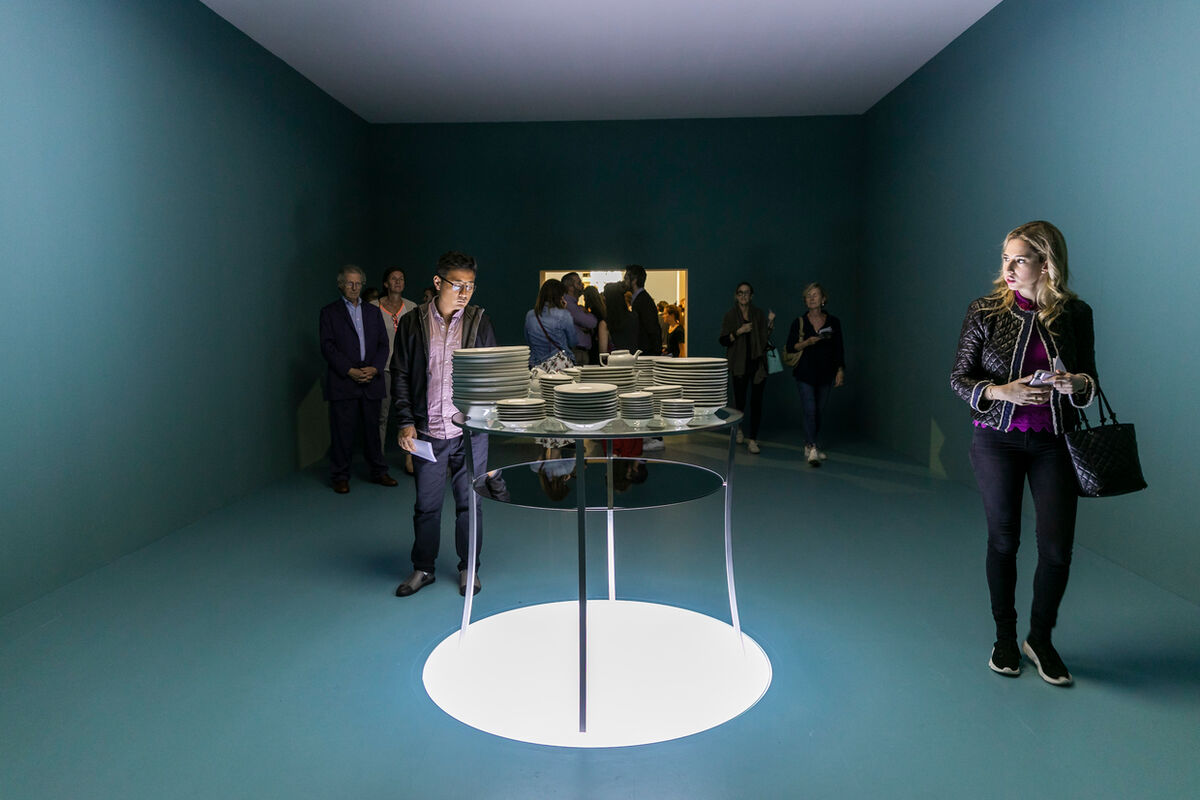 Barbara Bloom
has had a series of welcome comeback vehicles in the last year. The 1980s artist loosely associated with the
Pictures Generation
had a show that closed last June at David Lewis Gallery in New York, which was a triumph, and she also had work prominently included in the survey “Brand New: Art and Commodity in the 1980s” at the Hirshhorn, which closed this May. Now, visitors to the Messeplatz can take in The Tip of the Iceberg, which takes its inspiration from the wreck of the Titanic.
Lewis explained that Bloom thinks of the maritime disaster as the quintessential American story. Entering the dim booth, one finds a circular glass table bearing plates embossed with “RMS TITANIC”; underneath is a mirror, reflecting images of the Titanic’s wreckage that appear on the bottom of the plates.
The piece was first displayed at Jay Gorney Modern Art in New York’s SoHo in 1991. Gorney now works at Paula Cooper Gallery, which was at Unlimited presenting a video by Bruce Conner; when asked what it was like to see the work again after all these years, he gasped and said, “It was quite strange!” 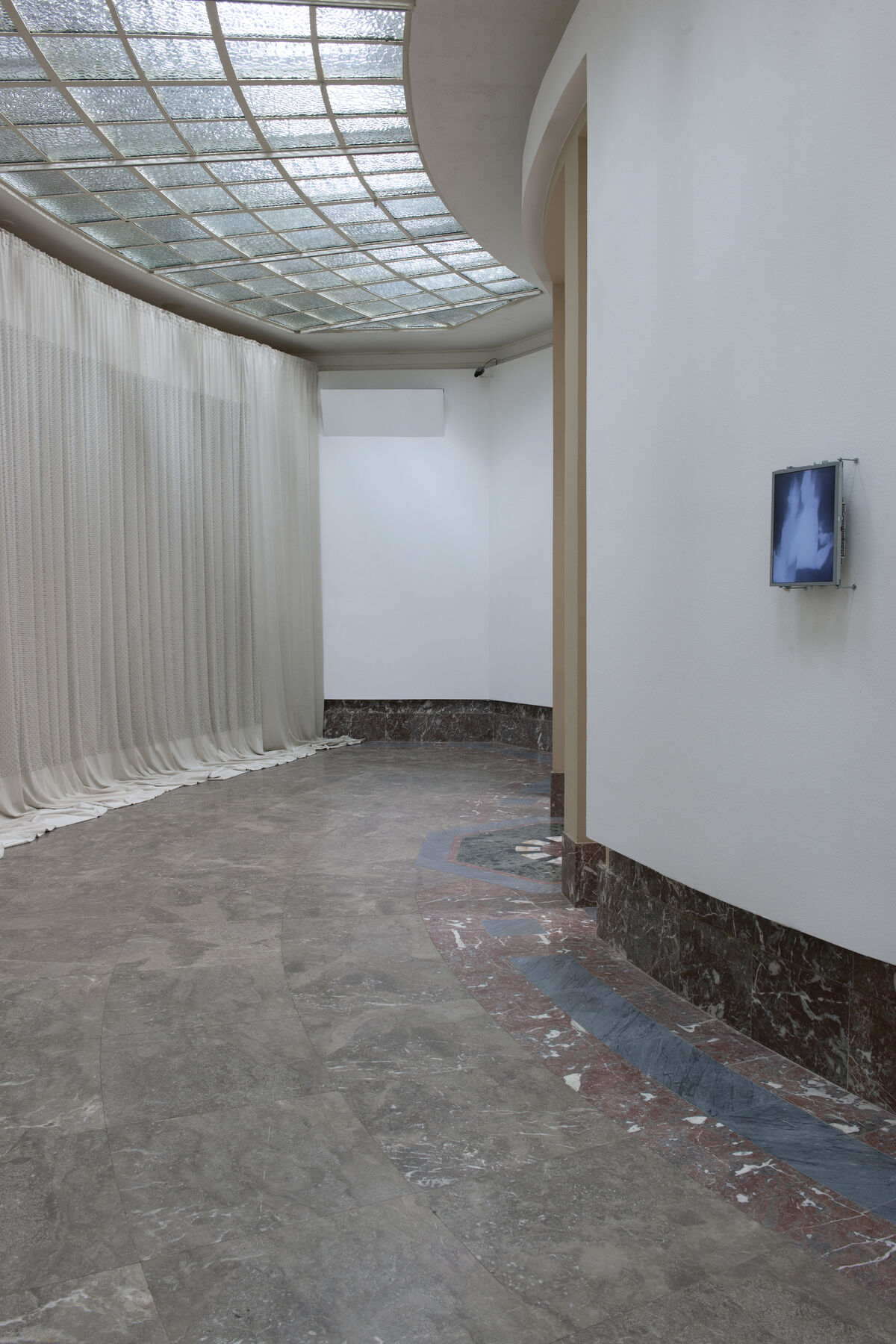 Another stand-out of from last year’s Venice Biennale,
Edith Dekyndt
’s They Shoot Horses (Part One) takes its name from the Depression-era novel by Horace McCoy, which centers on a 879-hour-long dance marathon. The book ends with its male protagonist, Robert, shooting his partner, Gloria, at her request and later explaining to the police: “They shoot horses, don’t they?” Dekyndt dug up archival footage of a similar dance marathon, events that became popular as entertainment during the Great Depression, with participants who were lured by the possibility of a cash prize and the food often provided during the competition.
The footage plays on a monitor at the end of a hallway constructed from a velvet curtain that is pierced regularly in a matrix pattern with nails. From inside the hallway, the nailheads make a pleasant, decorative addition to the otherwise plain piece of fabric. But outside, those thousands of nail shanks point outwards like part of a medieval torture device—no doubt a reference to the harsh realities and desperation that led many to the dance marathons (and to their contemporary variations). 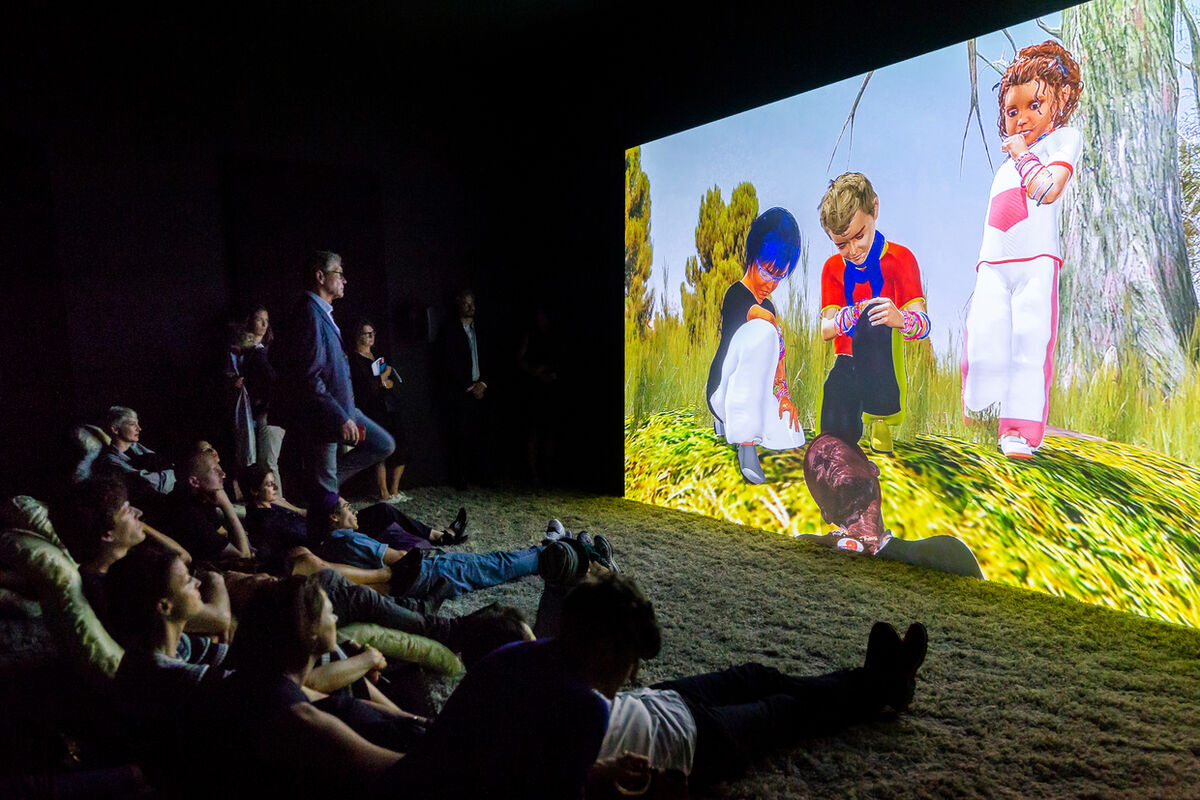 A duo of kids, looking like superheroes, jump off the back of a cherry-red motorcycle; one sprouts two giant drills out of her hands. They tunnel down into the ground, passing rock and red-hot magma, before landing—where else?—at a vast data storage facility hidden in the earth’s core. A misguided data-security scheme? Maybe. But it’s one pulled not from Jeff Bezos’s boardroom, but instead from the dreams of artist
Jon Rafman
. He’s made a habit of rendering these daily using cheap 3D animation software, a practice that has evolved into epic video works like this one on view at Art Basel.
Dream Journal 2016–2017 invites viewers into a shag-carpeted room to sit back on a group of custom-built lounge chairs and watch a series of Rafman’s dreams play out. They mainly focus on a female duo living in a dystopia that’s part Ready Player One, part Blade Runner, and part Futurama. The 49-minute result is both funny and discomfiting. 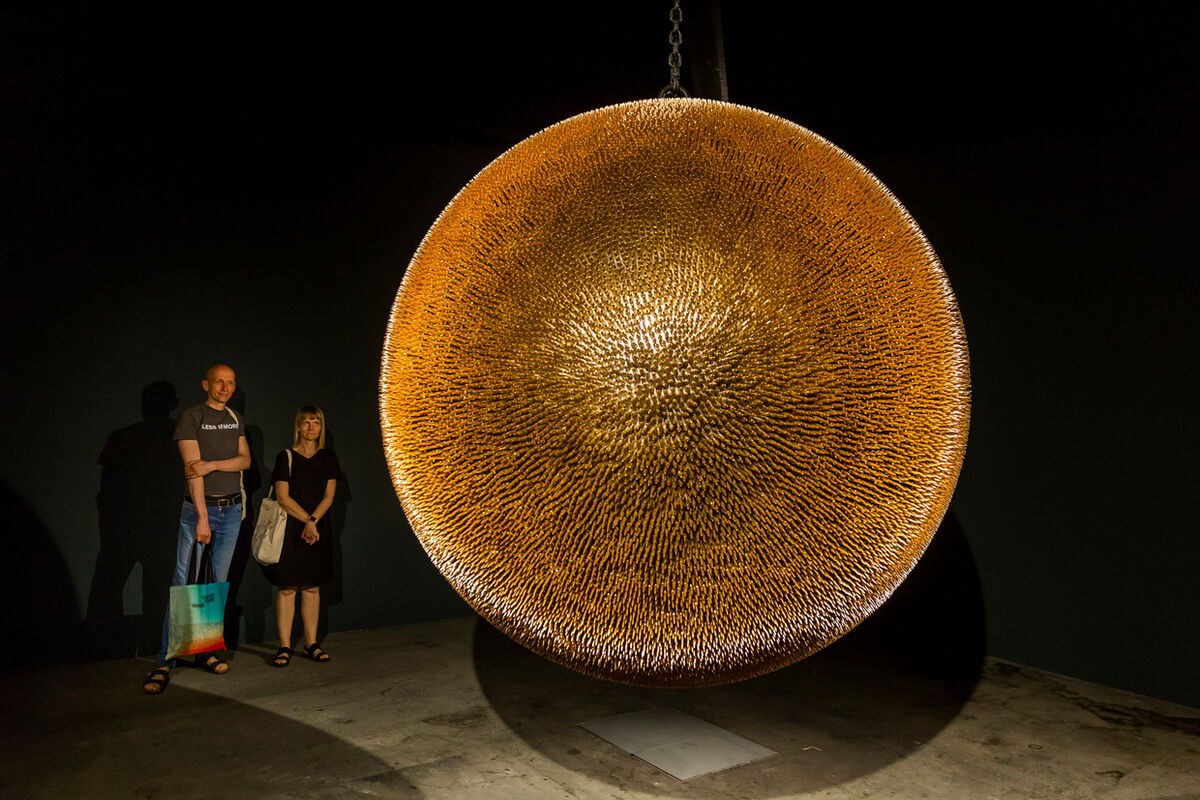 Robert Longo
made his first Death Star sculpture in 1993. It was half the size of this one. And while there are surely plenty of artists who have upped their works’ scale over the past 25 years—at least in part due to considerable growth in the art market, which has increased demand for truly large and astronomically expensive work—such is not the case with Death Star II. It’s double the size because it’s made up of more than double the number of copper and brass full metal jacket bullets: 40,000 of them.
The work is a chilling memorial to the exponential increases in the number of mass shootings in the United States, its gun deaths overall, and since Longo made the first iteration of the sculpture. (Mass shooting deaths hit an all-time high in the U.S. last year, but still make up a mere fraction of all U.S. gun-related deaths.) Longo is committed enough to the issue that he’s giving 20 percent of the proceeds from the sale of the sculpture to Everytown for Gun Safety, a nonprofit to end gun violence, founded by former New York mayor Michael Bloomberg. 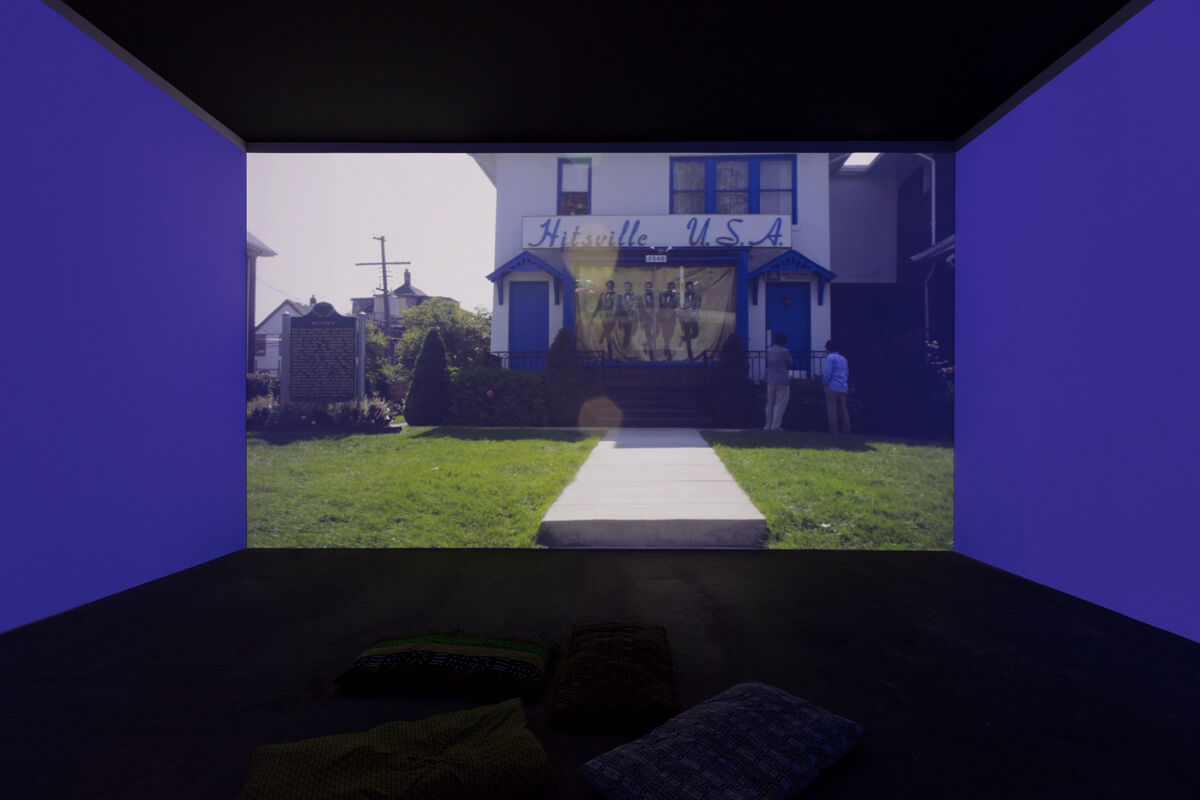 For the last four years,
Martine Syms
has been collecting found footage connected only by, as an explanatory text puts it, the fact that together, they make “a mass of fragmentary narratives, relating (indirectly and incidentally) to the lives of black Americans.” Each clip is 30 seconds long. The booth is presented by London gallery Sadie Coles HQ (in collaboration with Bridget Donahue Gallery, which also represents the artist).
We see the disparate footage randomly shuffling across three separate screens, informed by an algorithm that ensures no clip is played twice in a row. Syms is catholic in her tastes, drawing from the short-lived app Vine, as well as footage she shoots herself and videos arrived at via strange YouTube rabbit holes. The cumulative effect is at first jarring, then boring, then enlightening in a way that makes the whole journey seem more than worthwhile.
In the span of just a few minutes, I saw a man in a chef’s toque dancing along to hip-hop; a car driving through some tropical paradise while chopped ‘n’ screwed rap was blasting; Syms getting a French lesson; a horse trotting on a farm; Venus Williams being interviewed at age 14; a Blair Witch Project-style home movie; and 30 seconds of Syms on her laptop, presumably in the midst of unearthing more clips to add to the project. Showing at Art Basel after acclaimed runs at London’s Barbican Center and the National Gallery of Victoria, Melbourne, the film Incoming is the result of
Richard Mosse
’s latest adoption of military technology for artistic purposes. This time, he employs a thermal radiation camera that can shoot clear images from 30 kilometers (about 18.5 miles) away. Like “Heat Maps,” his series of photographs that were shot with the same high-tech camera over a period of three years, Incoming follows the journeys of migrants living in refugee camps throughout Europe, the Middle East, and North Africa. The subject matter is at times banal (two men wringing out laundry) and at other times horrifying (bodies being fished from the sea). The camera itself makes these shots all the more otherworldly, Mosse’s subjects turned into something between a grisaille painting of themselves and a digital avatar.
Nate Freeman
Alexander Forbes is Artsy’s Consumer Marketplace Strategist. He was previously the Executive Editor of Artsy Editorial.
Related Stories