10 Photographers Who Captured the Changing Face of San Francisco

Rachel Lebowitz
Jun 21, 2016 7:58pm
Located on the westernmost edge of the United States, San Francisco has long been a space for those living on the margins, as well as for power brokers and industrialists. The site of the oldest Chinatown on the continent, the birthplace of the Beat movement in the 1950s, and home to Harvey Milk and many of the country’s first gay and lesbian organizations, San Francisco has for decades been a hub of alternative culture—and a site of immense upheaval and change. As the city continues to grapple with the changes wrought by its proximity to Silicon Valley, and it prepares to host its 46th LGBT Pride Parade—making it one of the oldest in the country—we celebrate the prominent photographers who have captured the city’s diversity and transformation over the years. 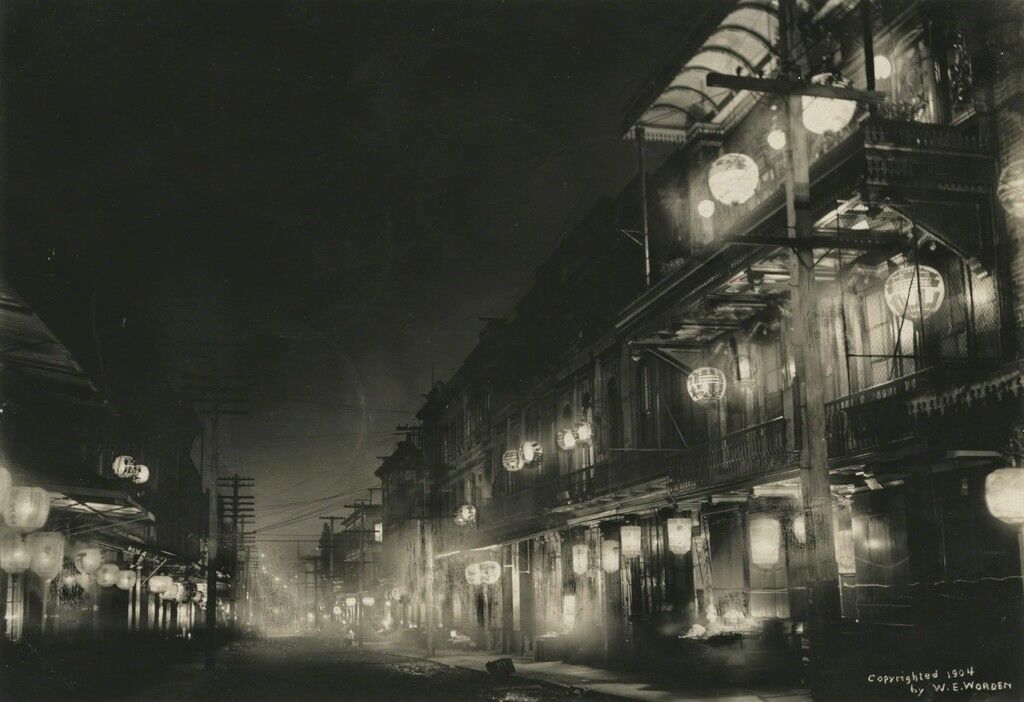 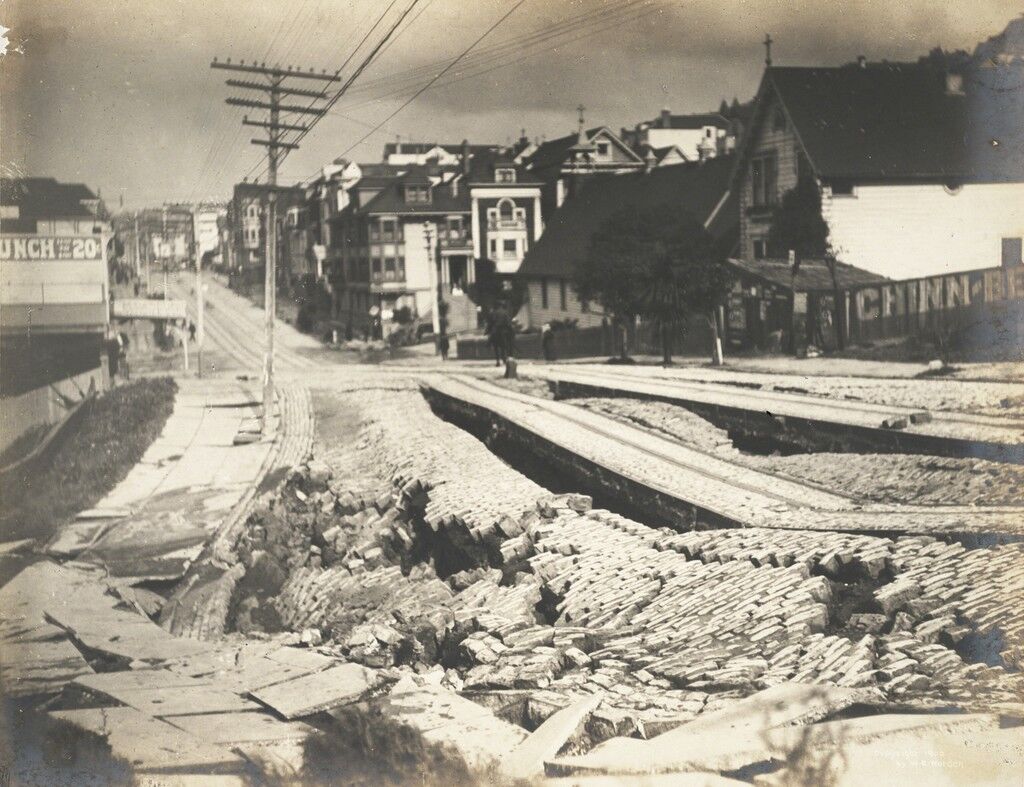 Willard Worden
Earthquake Damage to Union Street, 1906
San Francisco Museum of Modern Art (SFMOMA)
Worden first took up photography as a soldier in the Philippine-American War, later rising to prominence for his dramatic, elegantly composed images of San Francisco’s landscapes and architecture and of the destruction caused by the city’s infamous 1906 earthquake. By 1915, Worden was made an official photographer for that year’s San Francisco-hosted World’s Fair—the 100th anniversary of which coincided with his solo retrospective at the city’s de Young Museum last year. 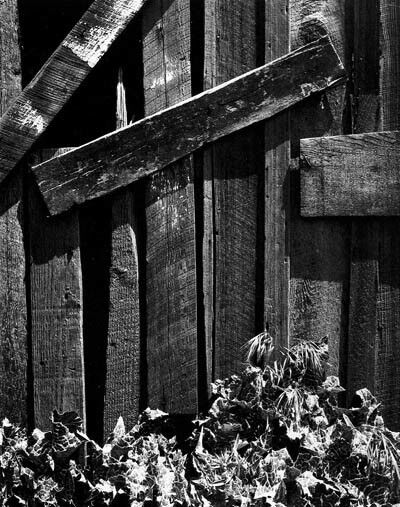 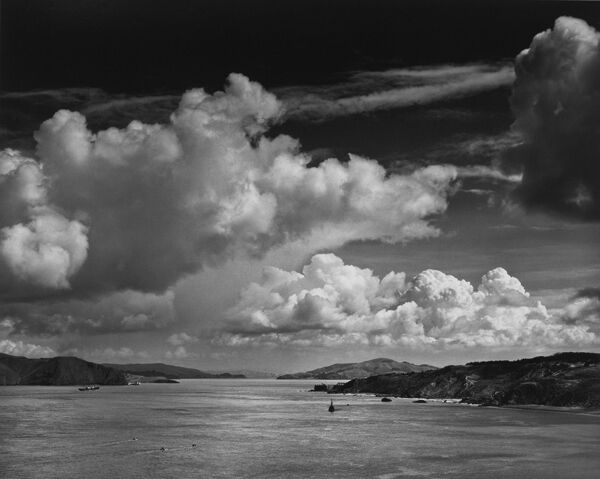 Ansel Adams
Golden Gate Before the Bridge, San Francisco, CA, 1932
Weston Gallery
Advertisement
Adams’s crisply detailed images of California locations, from Yosemite to Death Valley, have made him a canonical figure of American landscape photography. Disinterested in the soft-focus subterfuge of
Pictorialism
, Adams helped found Group f/64, which championed an unmanipulated or “straight” photography that can be found in his photographs of his native San Francisco. A 1932 image of the Golden Gate Strait, taken a year before construction began on the bridge that would cross it, not only speaks to Adams’s fierce dedication to his craft—it took him 10 years to get the perfect shot—but also immortalizes the city’s past. 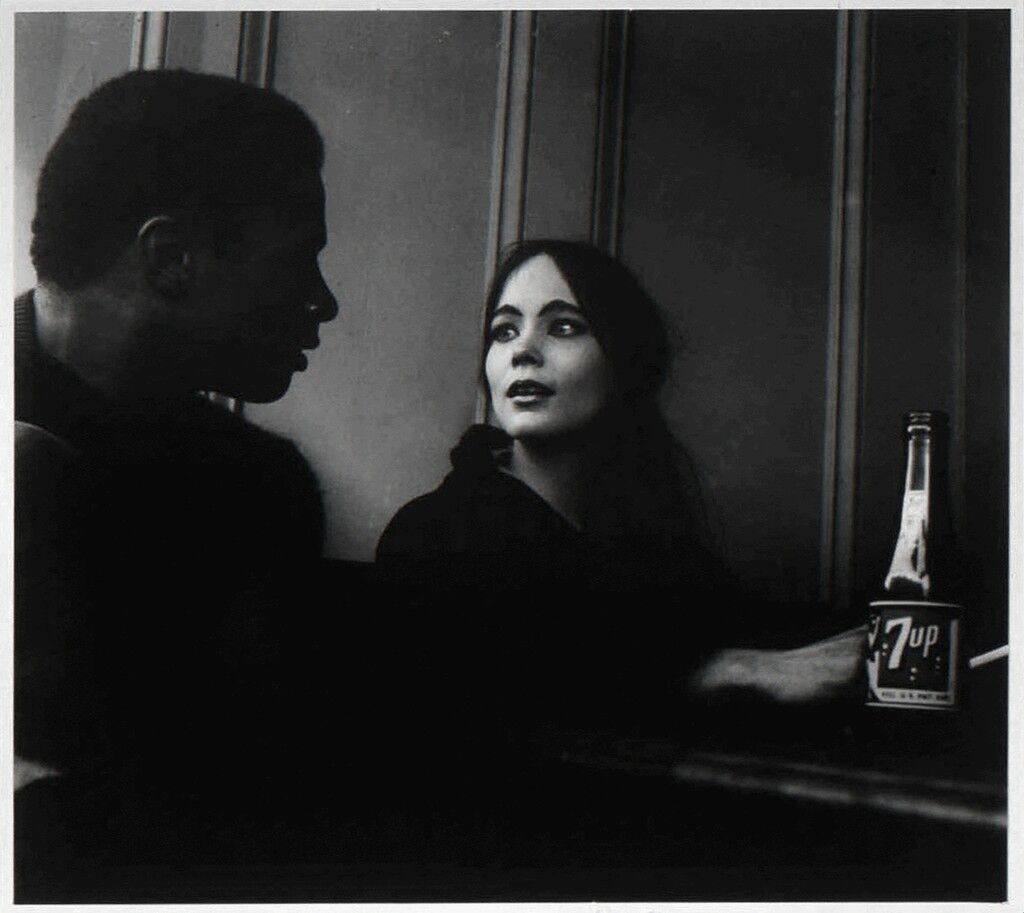 Imogen Cunningham
Coffee Gallery, San Francisco, 1960, 1960
di Rosa
Though she was at the forefront of the Pictorialist movement on the West Coast while working in Seattle early in her career, Cunningham later moved to San Francisco, where she shot her signature, sharp-focus botanical images and became a founding member of f/64—and one of the few women in the group. Exploring diverse subjects and technical approaches (she photographed celebrities for Vanity Fair and dabbled in double exposures) over her seven-decade career, in the 1940s she shifted her focus to street photography, going on to capture the countercultural movement of the ’60s as it erupted in the Golden City. 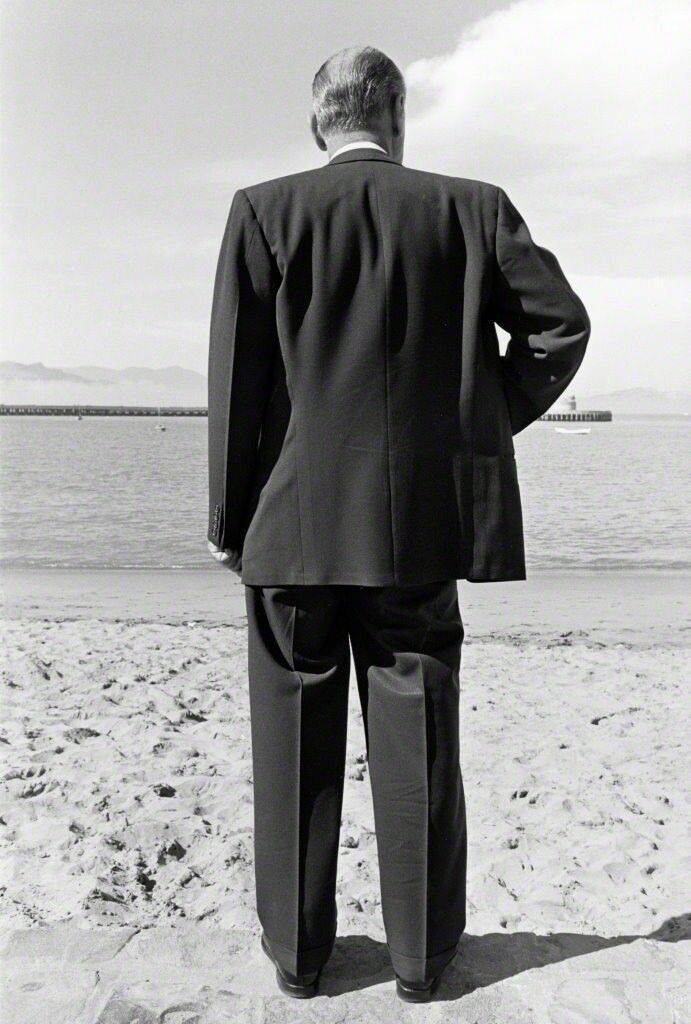 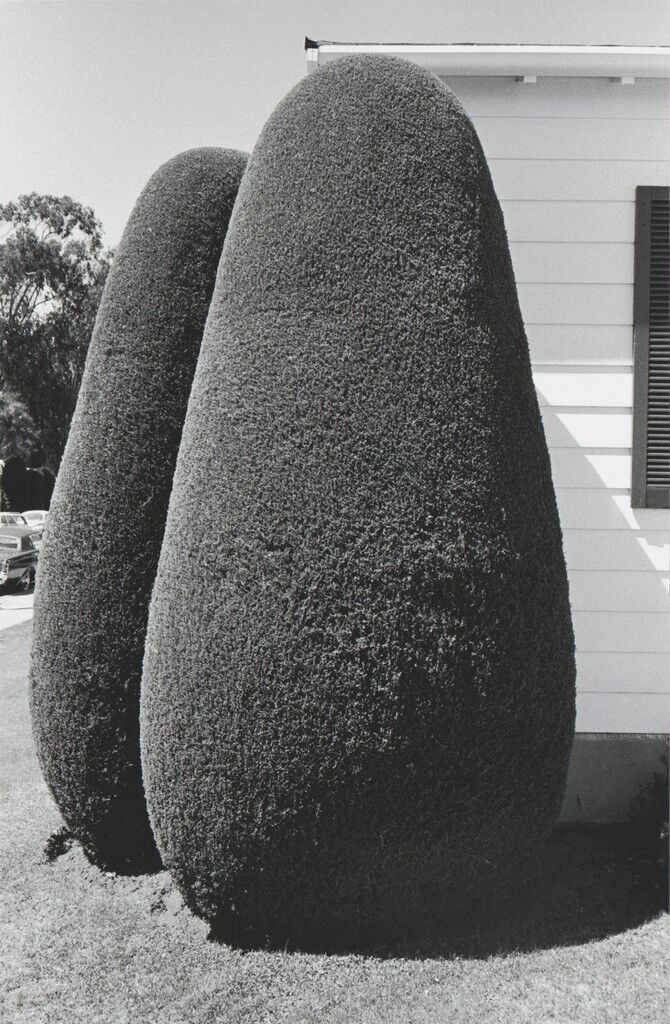 Henry Wessel
San Francisco, 1972
Pace/MacGill Gallery
In Wessel’s witty images, backyard topiaries elicit as much curiosity as an anonymous man in a suit staring out to sea. The New Jersey-born photographer deftly incorporates California’s distinctive natural light—which struck him as a “physical presence” and motivated him to move to San Francisco early in his career—transforming his commonplace subjects into vignettes of light and shadow. At the same time, his compositions feel spontaneous, revealing the open-minded, instinctive approach to his medium that has shaped his practice for over four decades. 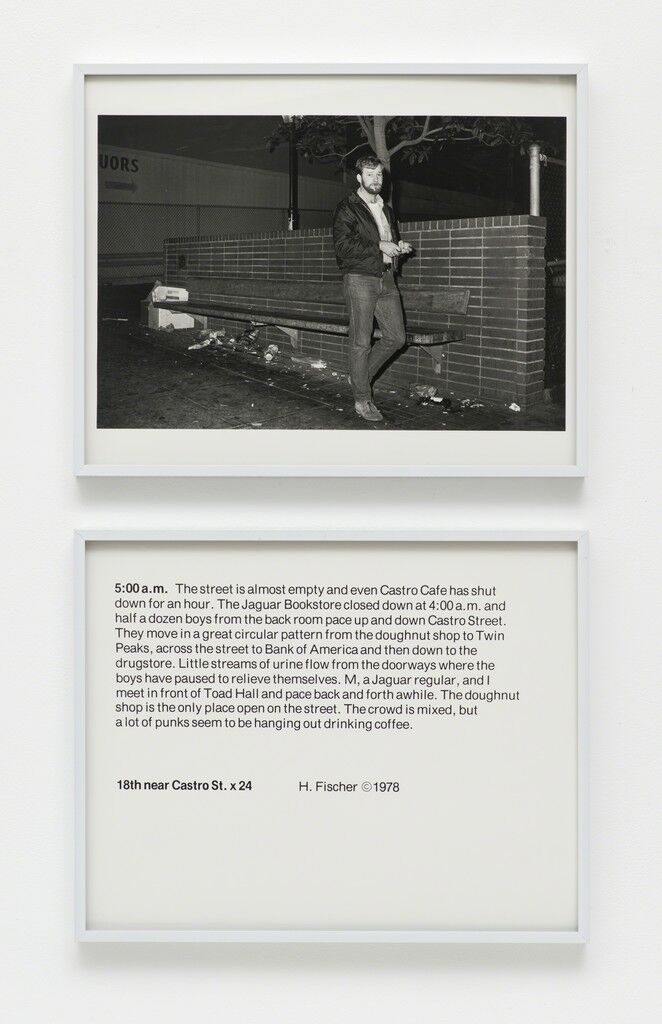 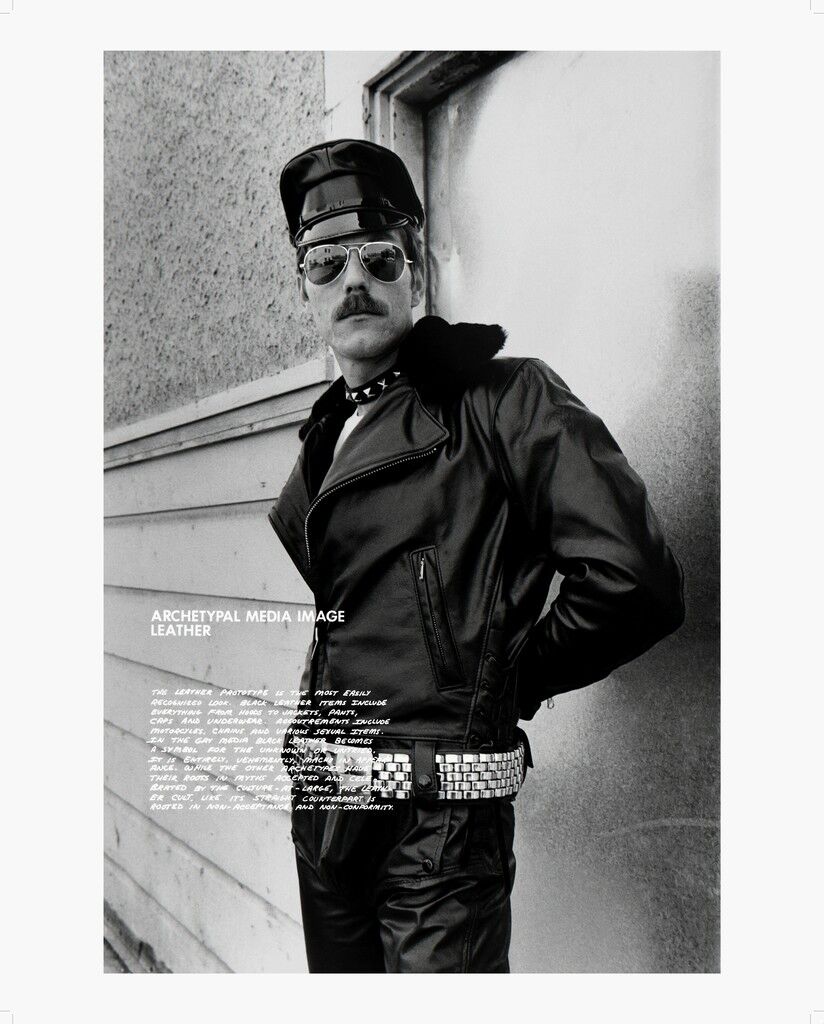 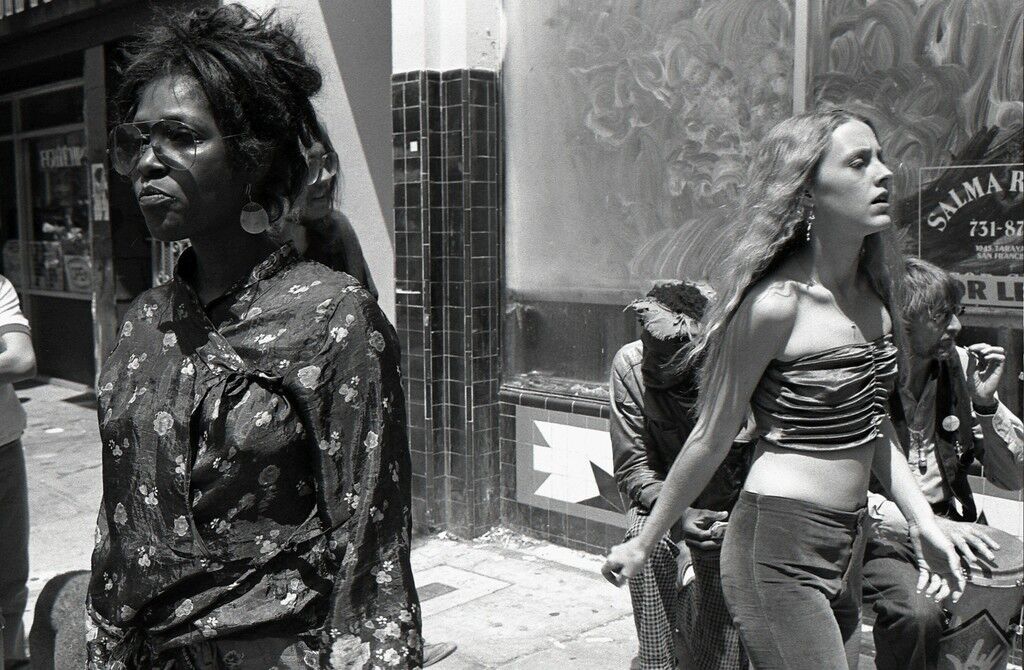 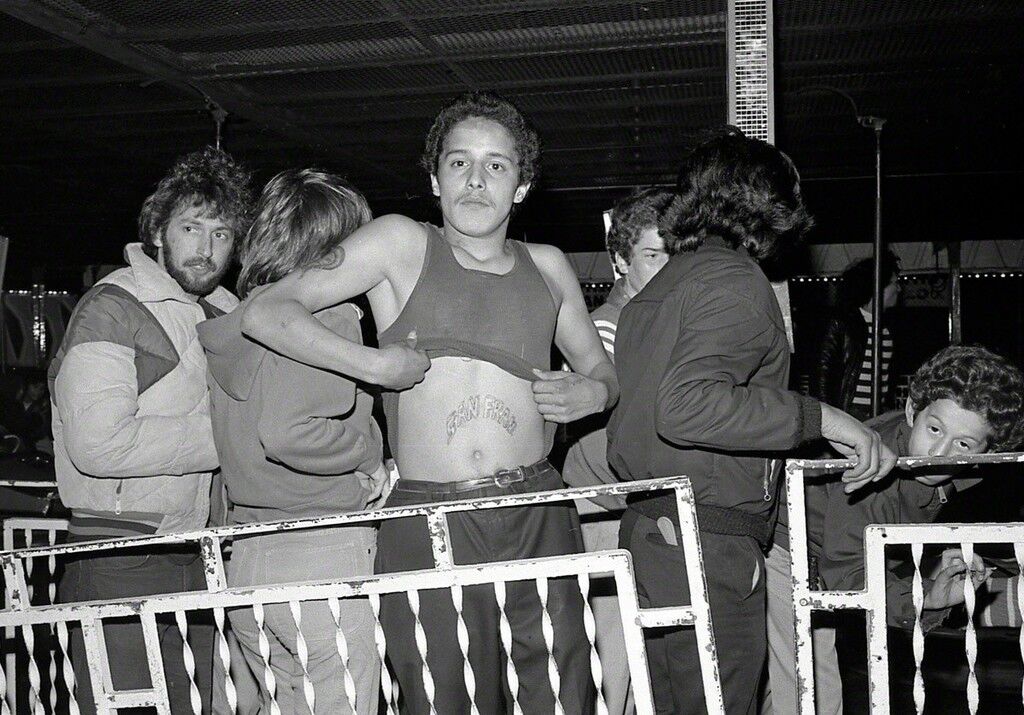 Ted Pushinsky
1978, 1978
Mark Wolfe Contemporary
Pushinsky’s candid snapshots taken on the streets of San Francisco document 40 years of politics, fashion, and life in the city. His energetic freeze-frames can be traced to his early years photographing dance and boxing matches. From two women walking on Haight Street to a youth baring his stomach (and city pride), Pushinsky’s photos are intimate yet enigmatic. A former English major inspired by Dostoevsky and Dickens, Pushinsky aims to practice a type of visual storytelling that hints at an unknown narrative while meditating on larger issues in the city’s history. 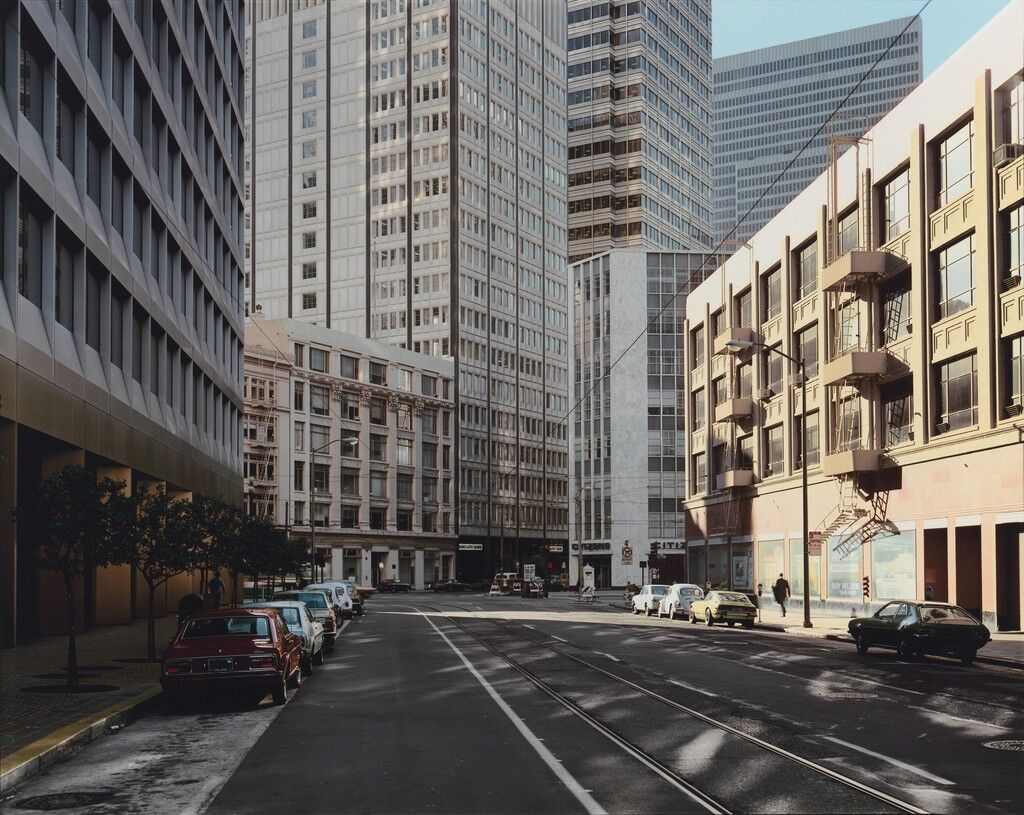 Stephen Shore
Market Street, San Francisco, California, September 4, 1974, 1974
San Francisco Museum of Modern Art (SFMOMA)
The second living photographer to be granted a solo show at New York’s Metropolitan Museum of Art—at 23, no less—Shore helped eke out a place for color photography in the art world of the 1970s. During the early ’70s, Shore trekked cross-country, shooting gas stations and diner meals. Transfiguring these everyday objects and scenes through striking palettes and compositions, the photographer creates images that appear casual despite their careful planning. A photograph of San Francisco’s Market Street, nearly devoid of people, becomes a transfixing network of pastel blues and peaches. 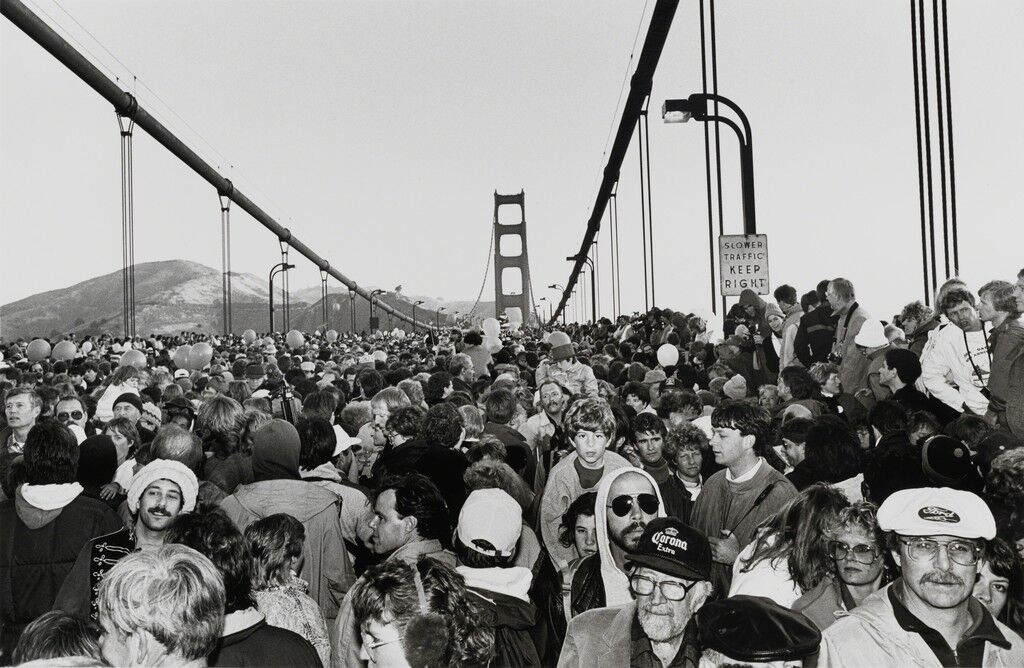 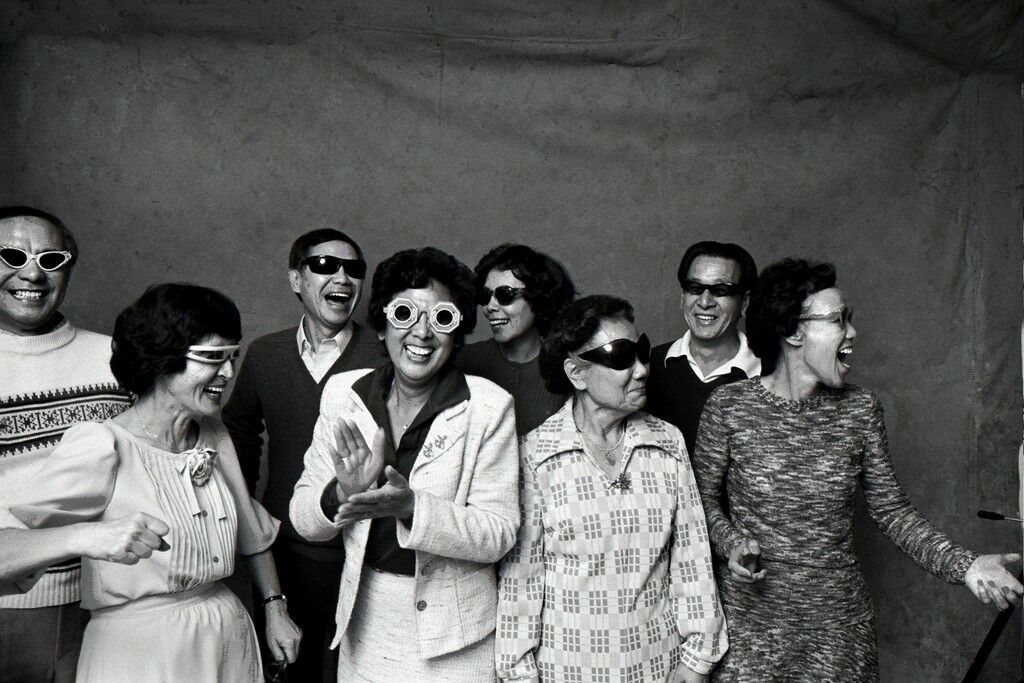 Michael Jang
Aunts and Uncles from "The Jangs", 1973
Wirtz Art
Jang recently drew attention for photos he took in college at CalArts, when he finagled his way into exclusive Hollywood parties and shot celebrities like David Bowie and Frank Sinatra. Soon after snapping those pictures, Jang applied his talent for capturing intimate moments to a series centered on his extended family and their lives in San Francisco. Living with his cousins in the suburbs for a month—while studying under
Lisette Model
—he captured unguarded, humorous moments in groundbreaking images that serve as a rare, humanizing glimpse into the life of a Chinese-American family in the ’70s. 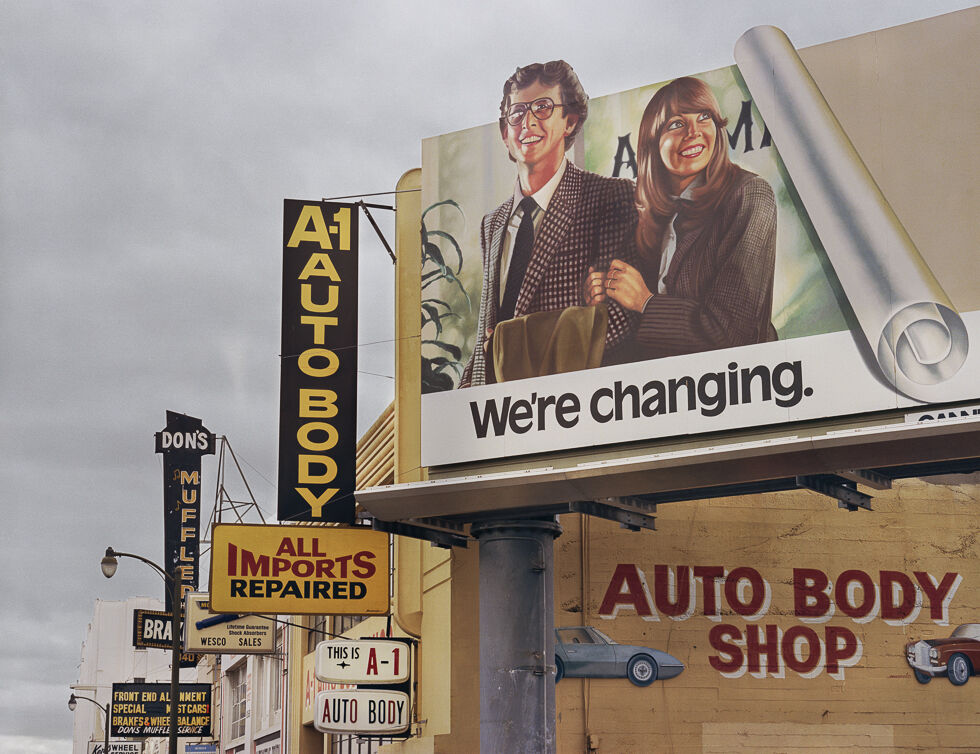 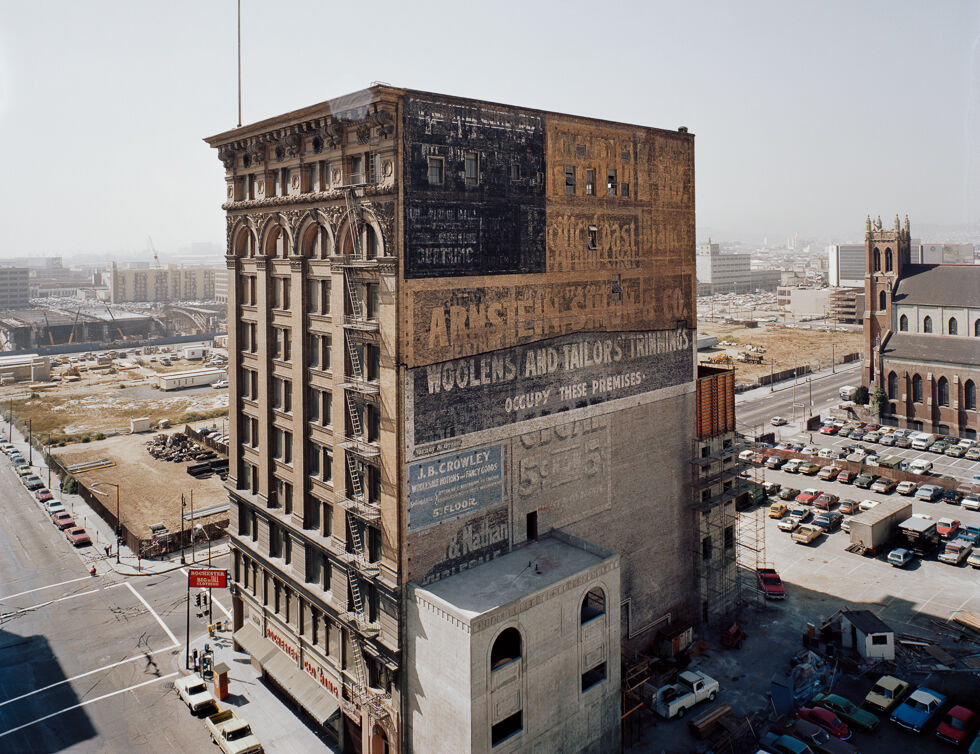 Janet Delaney
Mercantile Building, Mission and 3rd Streets, 1980
ClampArt
When the Los Angeles-born Delaney moved to South of Market in the late ’70s, the San Francisco neighborhood was, simply put, in flux. In both images and interviews, Delaney documented the SoMa area and its residents over an eight-year period, as construction on the mammoth new Moscone convention center planted the seeds for a drastic transformation of the working-class neighborhood—home also to artistic and gay communities. More than three decades later, as the city faces gentrification and skyrocketing rents amidst the booming tech industry, Delaney’s work continues to strike a chord.

In the 1970s, Sultan pioneered conceptual photography using found archival images. Still conceptually rooted, his subsequent series intentionally slip between documentary and staged tableaux, injected with autobiographical elements. For “Homeland” (2006–09), Sultan hired and meticulously posed day laborers on the outer limits of California suburbs, including those outside of San Francisco. The images explore both the subjects’ outsider statuses and the liminal nature of these borderlands. Meanwhile, “San Francisco Society” (2007), which first accompanied a W magazine article, documents the families of San Francisco’s ultra-monied Gold Coast neighborhood.