10 Years After Katrina, How Art Has Altered New Orleans Art After the Storm

A decade after Hurricane Katrina threatened the very existence of New Orleans, a vibrant arts community is restoring the fabric of this indelibly creative city—and recasting its future.
By the time the Mississippi River reaches New Orleans, it bears water that has passed through 31 states and two Canadian provinces. A few miles south of the city, after a three-month, 2,300-mile journey from Minnesota, the river empties into the Gulf of Mexico, depositing the rich sediment that makes the swampy land of the Delta among the most verdant and fertile in the nation. This geological truth is one that Susan Gisleson, co-founder of the non-profit Press Street, endows with metaphorical significance. “I think of New Orleans as the collective subconscious of America,” she says, “[capturing] all the dreams and ideas trickling down.” Although Press Street officially opened its gallery space in 2008, the projects and ideas that became its core existed before Hurricane Katrina struck the city in 2005, germinating in the intervening years.
The raw figures of the storm’s impact remain staggering a decade later: nearly 2,000 deaths, more than $100 billion in damage, flooding in 80% of the city, and the displacement of 400,000 residents. That number represents 88% of the city’s total population at the time—the equivalent of 7.4 million New Yorkers disappearing overnight.
After the storm, with New Orleans officially shut down, Gisleson snuck back in. For the native New Orleanian, the scene was surreal. “I was in this metropolis with no human beings, no grocery stores; no mail was being delivered. Every single system was down.” In this environment, art became a powerful way to both assert the enduring creativity of New Orleans and to restore a modicum of agency to residents who spent most of their days forced to gut the interiors of their flooded homes.

In 2006, Gisleson’s brother-in-law, also a founding member of Press Street, proposed hosting a 24-hour draw-a-thon in a local church. “When you have a pencil, you have control. You can create something,” Gisleson notes. The event attracted local residents and even members of the Louisiana National Guard, fostering a sense of community, however temporary and tenuous. “A guy in full fatigues drawing a rose!” laughed Gisleson. “It was a totally surreal moment.” Now in its 10th year, the last draw-a-thon attracted some 1,600 people.
Art as a form of resilience has a long history in New Orleans. The city’s famous “second line” parades originally emerged at the turn of the century as a way for black New Orleanians to consciously reclaim the public sphere denied to them by Jim Crow. This, along with the creative foundation instilled by the centuries-old Mardi Gras, fueled the artistic recovery after Katrina, but also the utilitarian work that had to be done to repair the city. “So much of living in New Orleans after the storm was critical thinking and problem-solving,” notes Gisleson. “And that’s how you make art.” Keith Calhoun, “Who’s that man on that horse, I don’t know his name. but they call him Boss” (1981). Archival pigment print. Courtesy of Prospect New Orleans

Born out of chaos, events like the draw-a-thon and spaces like Press Street have gone on to thrive. This boom in the arts is partly due to a renewed sense of urgency, with Katrina acting as “a catalyst for making people do things they had been putting off,” according to artist Tony Campbell. After years of conversations with friends about starting an artist run space, in 2008 Campbell co-founded Good Children Gallery in St. Claude, a neighborhood in New Orleans that has been transformed by new galleries.
A significant uptick in the number of the city’s arts nonprofits is fanning this growth. The Joan Mitchell Foundation, which established a robust presence in 2010 when it purchased the historic House on Bayou Road in the 7th Ward, dedicated $12 million to the construction of an 8,000-square-foot studio building that opens this Saturday. “This is about an artist having time and space but also engaging with and for the community,” Gia Hamilton, the center’s director says, echoing sentiments I heard from many nonprofits that consistently rearticulated their desire to foster meaningful connections between local and out-of-town artists. Advertisement
The new center is the continuation of a long history of support. Shortly after Katrina, the Joan Mitchell Foundation and other nonprofits, such as the Arts Council, gave artists places to stay through residencies and financial support through much-needed grant money. “That was a lot of what I did,” Arts Council of New Orleans Associate Director of Artist Services Joycelyn Reynolds, who was displaced herself, recalls. “Meeting with displaced artists, giving council, giving them a shoulder to cry on.” In recent years, even as it mounts ambitious new initiatives like LUNA fête (think:
Wodiczko
meets the bayou), the Arts Council’s publicly-funded budget has not kept up with the increased arts activity in the city. State funding fell by some 70% after the storm and city funding, though rising, remains at a level more than $200,000 below that provided to artists in the smaller Louisiana city of Shreveport.
But Shreveport doesn’t have Prospect (among other things). Many point to the art biennial as a major reason—along with affordability—for the increase in artists flocking to New Orleans. A starter pistol for the city’s art scene, the first iteration of Prospect (P.1) in 2008 garnered the positive national and international attention sorely needed after the understandably bleak coverage that followed Katrina. “It’s not as if Prospect created anything,” says Ylva Rouse, Prospect’s deputy director for curatorial affairs. “It was the spark, the catalyzer, to ignite the community that was already there. That, in turn, attracted this incredible inflow of people into the city.” The brainchild of curator Dan Cameron, P.1 brought 80 artists to 24 venues across the city. “It landed like a spaceship,” says New Orleans arts writer John d’Addario. “You had to educate most people about what a biennial was.” 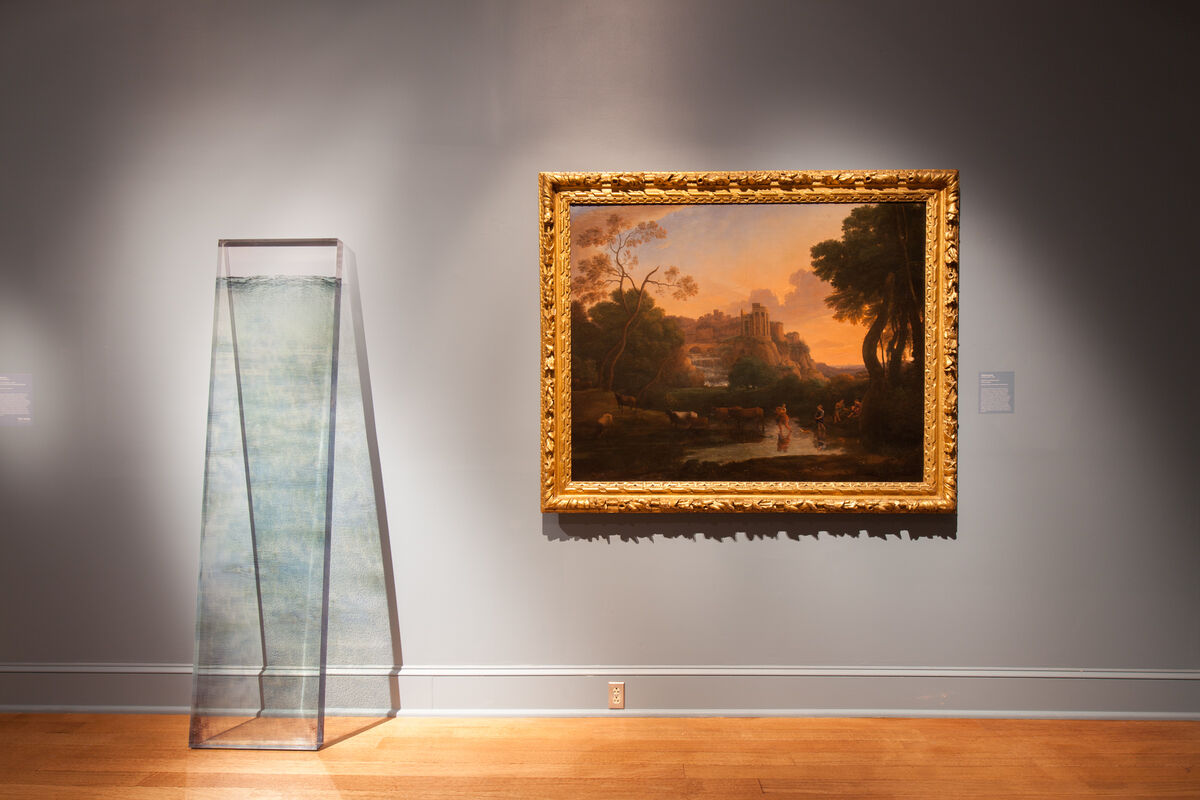 They quickly learned, and P.1 became a transformational moment. The New Orleans Museum of Art (NOMA) didn’t have a curator of contemporary art until the biennial—yet today it’s hosting “Ten Years Gone,” an exhibition which meditates broadly on the storm. “The memorial to Katrina really exists in all those little notches people leave on their houses that say ‘the water was this high,’” says NOMA curator Russell Lord. Referencing these urban monuments, Dawn DeDeaux’s “Water Markers” are spread throughout the entire museum in a way that Lord believes “echoes the multisite aspect of the storm.”
To push back against those New Orleanians who, consciously or unconsciously, blocked out Katrina’s destruction of the more impoverished areas of the city, P.1 included a number of site-specific works by artists including
Mark Bradford
,
Wangechi Mutu
, and
Nari Ward
. Put in the Lower 9th Ward, these pieces forced New Orleanians and visitors into an empathetic engagement with the deeply affected yet often neglected neighborhood.
Though such site-specific work has been significantly scaled back due to reduced budgets, subsequent iterations of Prospect have remained committed to engaging New Orleans as a whole. Curated by Franklin Sirmans, Prospect.3 (P.3), which ended in January, featured a majority of black artists, reflecting the demographics of a city that is nearly 60% African-American. After visiting P.3, Okwui Enwezor included work by
Keith Calhoun
and
Chandra McCormick
—a New Orleans duo who ran the only arts nonprofit in the Lower 9th Ward—in this year’s Venice Biennale. Today, the arts in New Orleans are incredibly vibrant. Yet, according to some, the rapid influx of outsiders attracted to cheap rent and the arts boom is negatively impacting the communities that form the bedrock of the city. “New Orleans is changing a lot,” notes d’Addario, adding, “If you think that’s a good thing or not a good thing, that depends on who you talk to.”
Indeed, a recent survey revealed a growing disparity in how black and white residents have come to perceive their home. Though, a majority cited New Orleans’s culture as the predominant source of pride. Gentrification has caused rents to rise dramatically, even as some 40,000–50,000 properties remain blighted. For the residents of Tremé, of the Lower 9th, or of Hollygrove, blighted buildings are safety hazards and psychological burdens, but also ever-present monuments to those residents who may never return.
Blights Out, a New Orleans community arts organization conceived of by artist Carl Joe Williams, has embarked on a lengthy program that will begin to address both the blighted properties and the tension between locals and outsiders. For “Home Court Crawl,” the first in an ambitious series of multifaceted projects, Blights Out worked with the local residents of Mid-City/Tremé to mobilize the blighted buildings in that neighborhood through performance art.
Lisa Sigal
, a New York-based artist, began by covering the buildings in evocative lines from several plays that speak to themes of urban abandonment and racial tension. Next, a second line-style event used music and spoken word to move from building to building, activating the blighted structures. “[I wanted to] let the houses speak,” Sigal says, “to make someone look a little longer, to give pause.”
Through a concerted grassroots effort, Blights Out is planning to purchase a blighted property and create a model for equitable property development. “A neighborhood should be able to be better for everyone without kicking people out,” says Imani Jacqueline Brown, a co-organizer of Blights Out. She argues that if the arts in New Orleans are to continue thriving, artists (and newcomers in particular) must actively engage in creating dialogue, mutual understanding, and positive change. “We all have to engage and think very critically and deeply about how we move through the world,” she adds.
That Blights Out blurs lines between property and art is only natural given the all-encompassing nature of New Orleans’s rapid privatization after Katrina. Recently, a charter school network declared its intention to takeover the abandoned Bell School in Tremé—a damaged building long promised to the nonprofit Artspace, which planned a $36 million renovation to create a community space anchored to 79 units of affordable housing for artists. A few weeks ago, the charter network abruptly withdrew its bid, in a turn of events that earned applause from locals at a recent community meeting.
A decade from now, what kind of metropolis the Mississippi River will wind through remains impossible to predict, but New Orleanians and transplants alike understand the city is at a pivotal moment as it approaches its tricentennial in 2018. It will be a long process to, as Gia Hamilton says, “think collectively about how we retain the essence of this place we call home.” Still, there is reason to be hopeful. Ten years after Hurricane Katrina prompted the then Speaker of the House to suggest that New Orleans may as well be bulldozed, local residents have defiantly proven that this city along the Mississippi will remain.
Isaac Kaplan is an Associate Editor at Artsy.
Related Stories