10 Young African Artists You Should Know

Sean O’Toole
Aug 31, 2015 5:09pm
Now in its eighth year, FNB Joburg opens its 2015 edition next week with a lineup featuring some of the strongest names in contemporary art from South Africa and the diaspora. Despite the emergence of other fairs with a pan-African focus in London, New York, and Paris, it remains a pre-eminent showcase on the continent. Curated by Lucy MacGarry, this year’s line-up includes 50 exhibitors from seven countries, with South African art still the chief focus.
Among other highlights, Johannesburg-born, Berlin-based
Candice Breitz
will show Him + Her, a work combining two seven-channel digital video installations that feature decades of footage of Meryl Streep (her) and Jack Nicholson (him); a working bar-cum-installation by
Cameron Platter
; and solo exhibition by 2015 FNB Art Prize winner Turiya Magadlela. Magadlela is but one of 10 up-and-coming talents under the age of 40 to look out for at the fair this year.

Following a 2006 visit to London, Burchell started exploring the possibilities of touch-activated sound sculpture as a means to delve into tensions between “the intimacy of home and the diasporic forces of the global technosphere,” she says.  In her audacious installation Homing (2013-15), Burchell produced a series of discrete sound recordings from various cities triggered by touching geometrically arranged copper wires. Similarly, her new project presented at the fair, a freestanding sculpture titled The Narrator (2015), requires touch to summon fragmentary spoken narratives. Burchell’s technological aptitude and craft as a sculptor are a given; what is most striking is her use of sound to create an impressionistic record of place and memory. 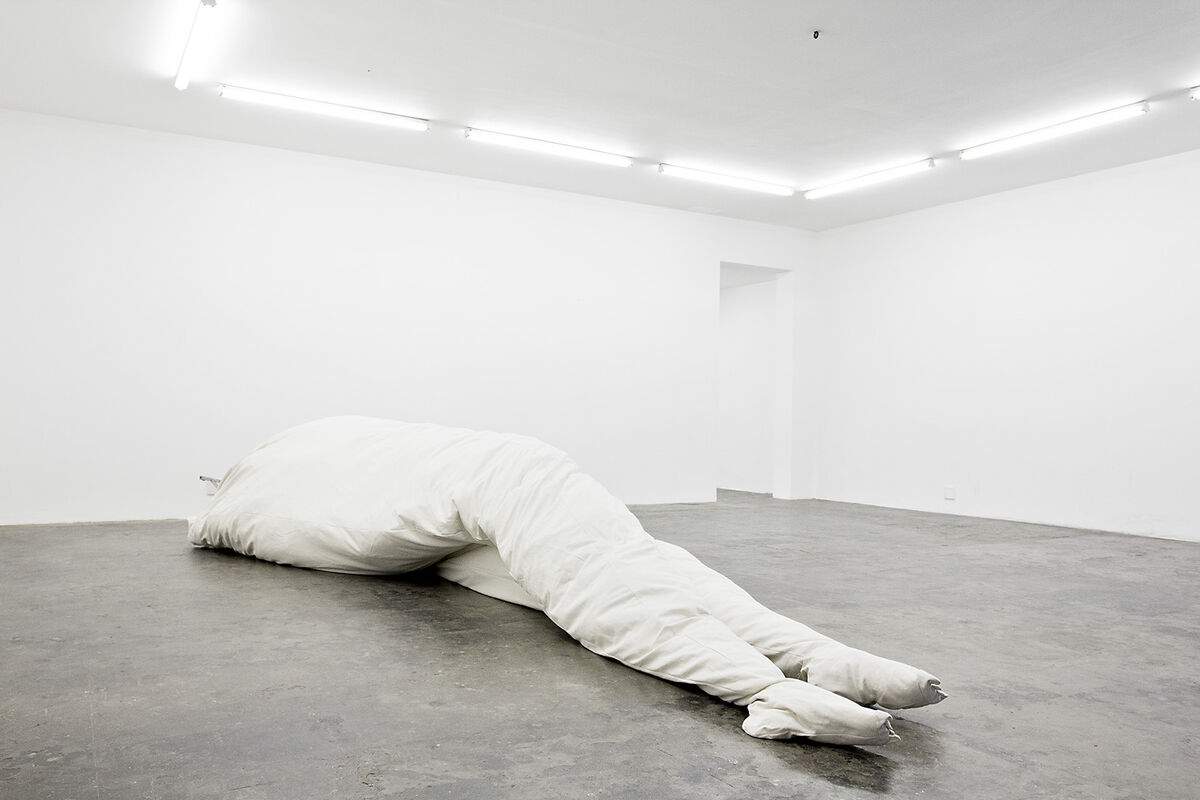 Advertisement
Since winning the 2010 Michaelis Prize for his graduate exhibition, Ginsburg has charmed and baffled viewers alike with his kinetic sculptures. The rickety motorized constructions are made from rudimentary materials like a gyrating pencil marking a wall and a perilously balanced ladder with a fluttering white ribbon rotating in a circle. His solo project for FNB Joburg, “Two Ends of a Line” (2015), is a rehearsal of this mesmeric practice. A member of Atlantic House, a studio space and hub of avant-garde activity in Cape Town, Ginsburg also makes short, non-narrative films and abstract prints that are a correlative of his anti-monumental sculptures. 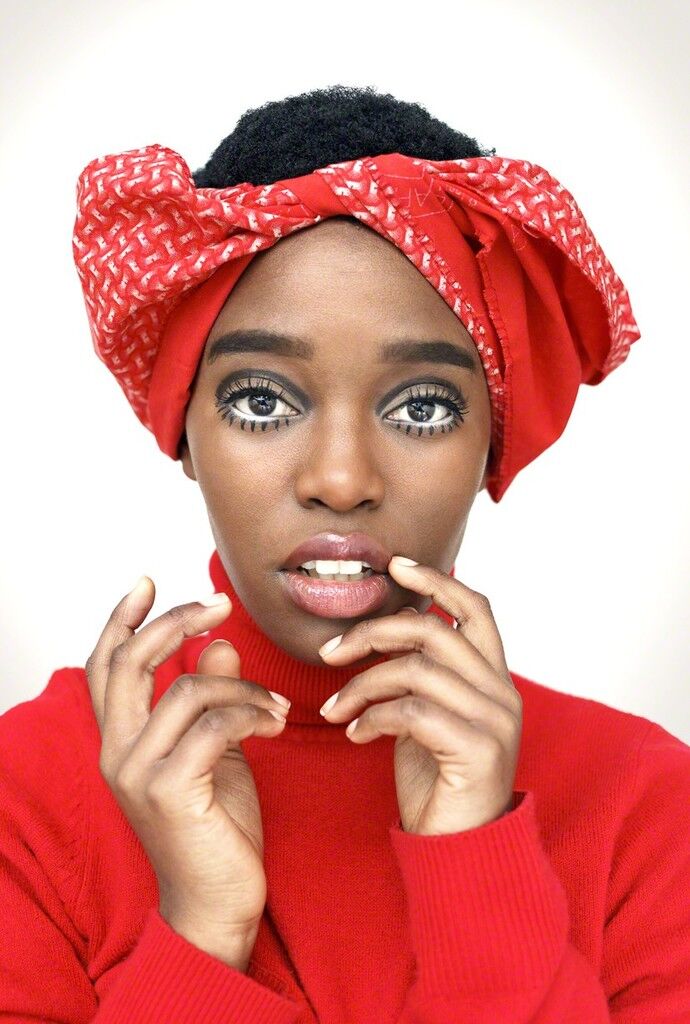 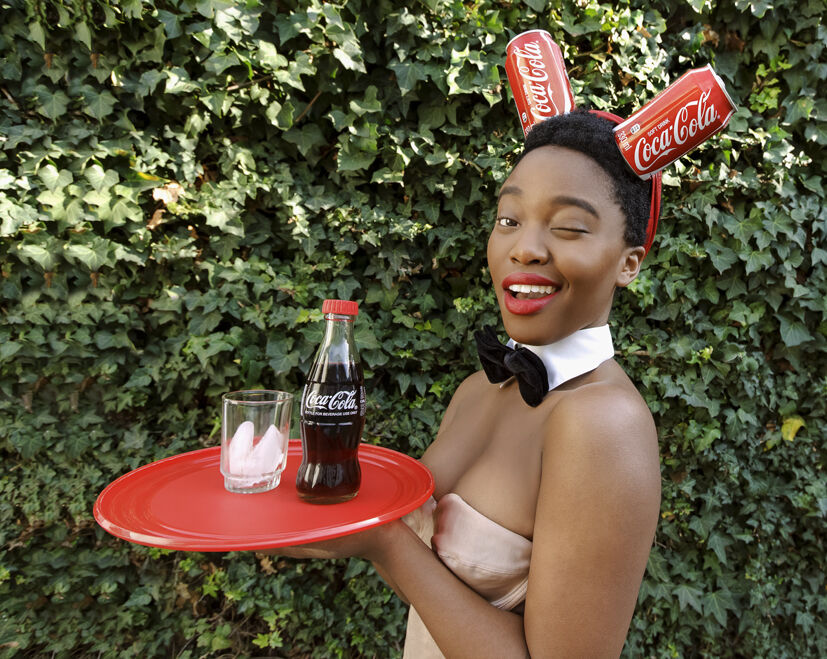 Tony Gum
Black Coca Cola Series - Bunny Girl, 2015
Christopher Moller Gallery
At just 20 years old, this post-Instagram self-portraitist from Cape Town has staked out a unique niche in the trending world of online maximalism. Who would have imagined remixing Wes Anderson’s desaturated film aesthetic with the floral excess of Senegalese portraitist
Omar Victor Diop
? Well, Cape Town-based Gum. Much like early
Cindy Sherman
, Gum’s skittering interests include fashion and film, although in her deadpan acceptance of consumerism as a fact of life this artist, model, and occasional brand ambassador is more closely allied—aesthetically as much as ideologically—to
Pop Art
and its chief local exponent, painter Vladimir Tretchikoff. 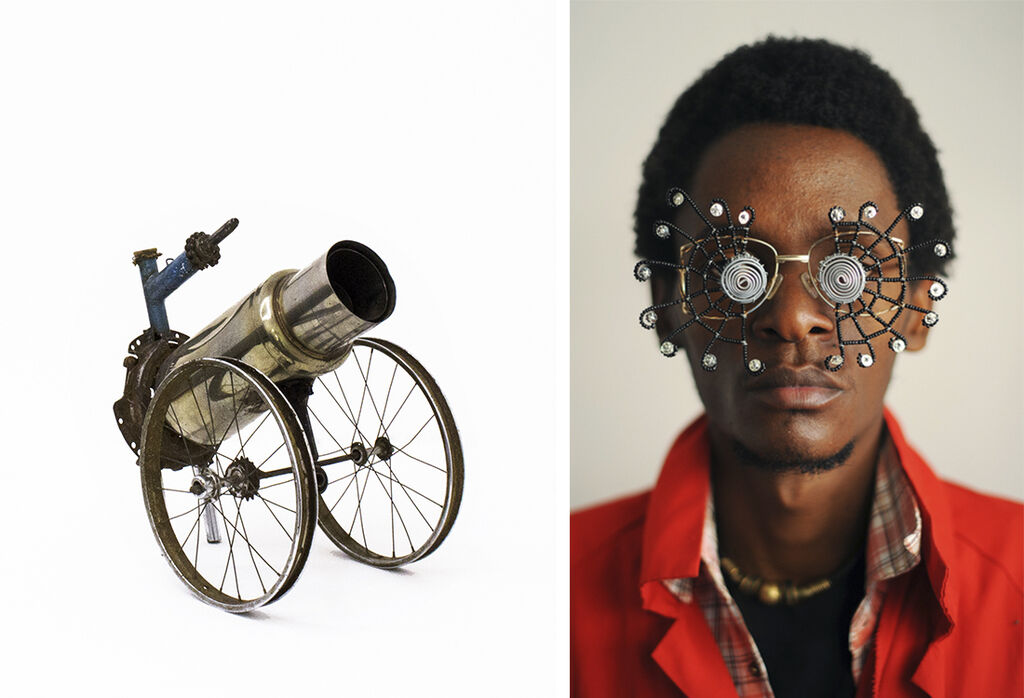 One of the stars of the blockbuster European exhibition “Making Africa: A Continent of Contemporary Design” at Basel’s Vitra Design Museum, Kabiru began making sculptural objects when he was three. The Nairobi-based artist has transformed worn-out bicycles into enthralling sculptures but is best known for his rough-hewn sculptural glasses, called C-Stunners, available both as sculptures or photographs. “I give the trash a second chance,” says Kabiru, a former TEDGlobal Fellow, of his method of recomposing urban flotsam into wearable art.

b. 1980, New York City. Lives and works in Johannesburg.
On view at FNB Joburg: The Johannesburg Pavilion 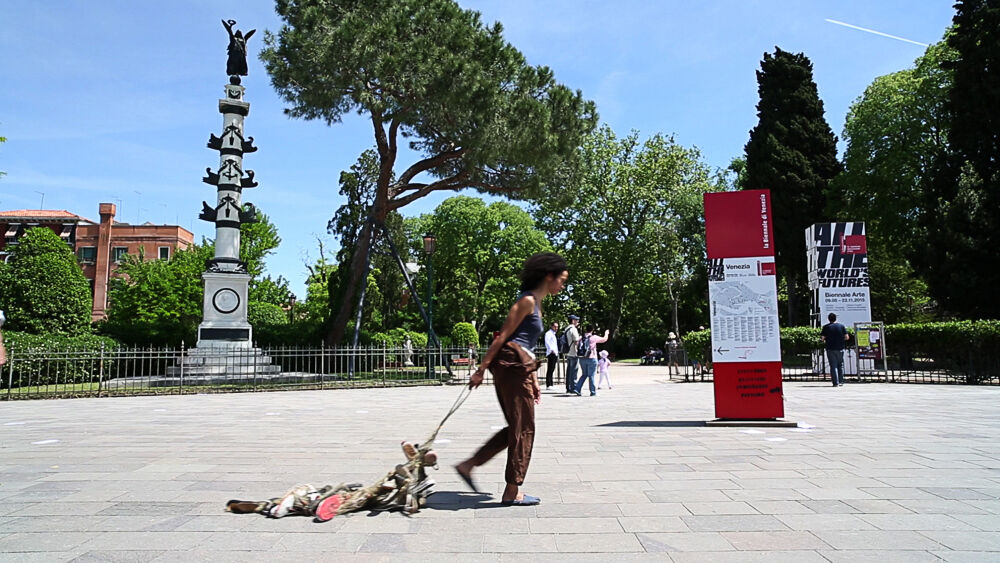 THENJIWE NIKI NKOSI
JETSAM, 2015
The Johannesburg Pavilion
Born in New York to a Greek-American mother and exiled South African father fleeing political oppression, Nkosi makes paintings of South African political figures and architectural landmarks in a reduced palette. Now based in Johannesburg, she has increasingly worked collaboratively, notably this year with artist
Pamela Phatsimo Sunstrum
on a playful multimedia installation included in the forward-looking new media showcase “Post African Futures.” Her collaborative film Jetsam (2015), made with artist Arya Lalloo and lensman Chris Wessels during a residency at this year’s Venice Biennale, will be screened as part of FNB Joburg’s Johannesburg Pavilion showcase. Her accomplished writing also appears in a new book, Wide Angle: Photography as Participatory Practice, to be launched at the fair’s Fourthwall Books stand. 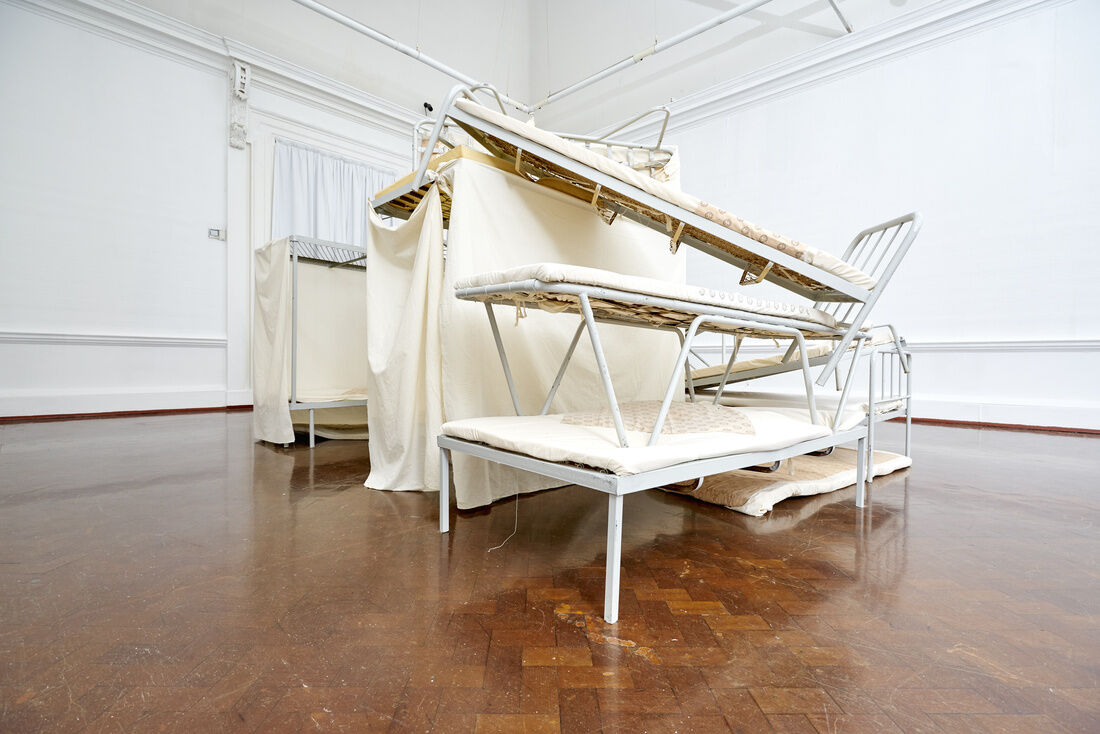 Winner of the FNB Art Prize in 2015 and alumni of the prestigious Rijksakademie in Amsterdam, Magadlela makes sculptures that want to be paintings. Working with culturally loaded fabrics—from silk stockings to traditional cloth and prison uniforms—Magadlela presents her minimally reworked material in familiar rectangular and square canvas formats. The title of her award exhibition, “Imihuzuko,” refers to the act of grazing one’s skin, and continues her allusive exploration of social history through the production of autonomous works in her distinctive personal grammar. She will be featured in her second solo show at blank projects this fall. 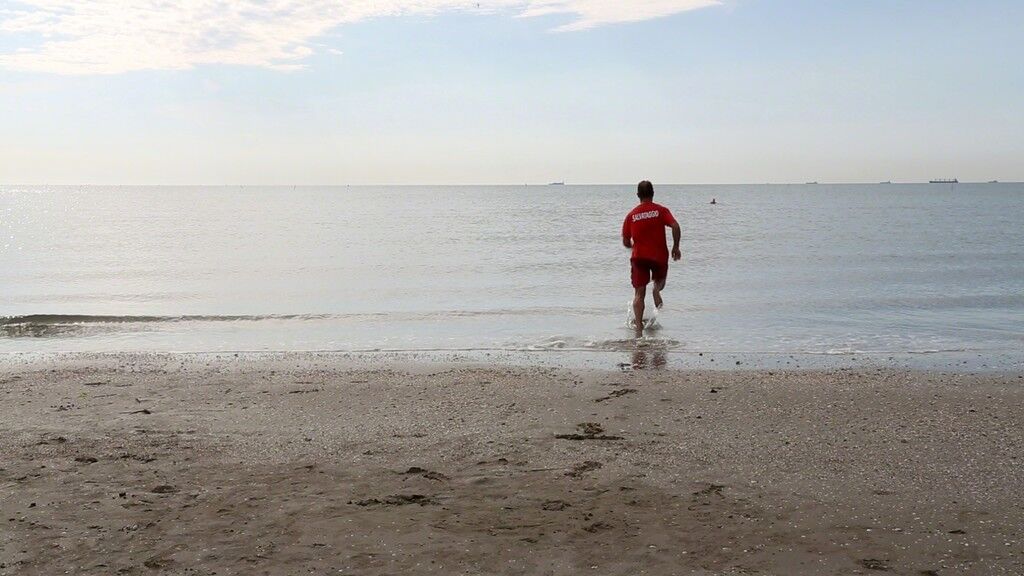 Anthea Moys
Marco Polo, 2015
The Johannesburg Pavilion
“Loser!” shouted a cyclist speeding past Moys as she pedalled her static gym bike during a 2006 bicycle race in Johannesburg in her performance piece 94.7 Cycle Challenge. “You’re going nowhere!” With its emphasis on physical endurance and cheerful fun, this early work set the tone for what has followed. Moys has since demonstrated her boxing skills on a high-rise rooftop, staged a satirical art auction, and confused guests at a dinner party. In 2013, she received an inaugural performance art award and singlehandedly took on a small town’s chess boffins, karate club, and football team—and lost. Quirk and humor, hallmarks of her practice, will again be on demonstration in her film Marco Polo (2015), part of the Johannesburg Pavilion showcase.

Portrait of Jonah Sack and Installation View of His Forthcoming Exhibition at Gallery AOP, courtesy of the gallery.

Like the work of
William Kentridge
, Sack’s drawings—first exhibited with Gallery AOP in 2011—are intensely restless and migratory. Sack has expanded his repertoire to include sculpture and film, and at FNB Joburg he’ll present his 2011 film, Exquisite Corpse, as a solo project with Gallery AOP. The film is about a headless man who emerges from a swamp to commit murder and dance to a jukebox, possessing a dark humor rooted in a local variant of the expressionist tradition. It is scored by jazz composer Carlo Mombelli and will later travel to New York’s Jewish Museum.

b. 1983, Karoi, Zimbabwe. Lives and works in Harare, Zimbabwe.
On view at FNB Joburg: WHATIFTHEWORLD 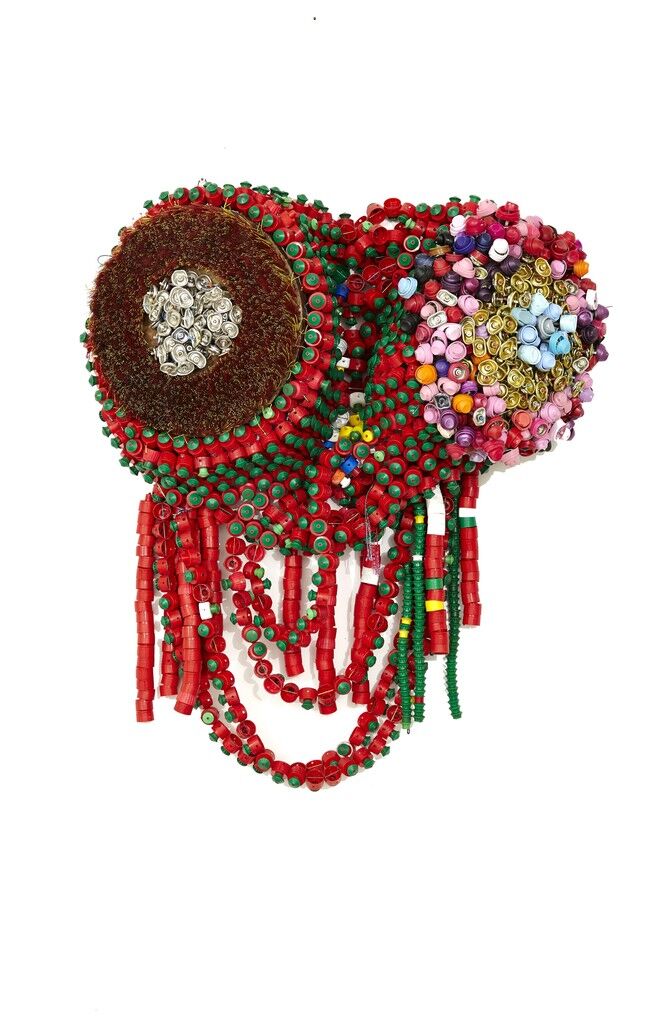 b. 1975, Durban, South Africa. Lives and works in Johannesburg. Wafer is a history painter, but not in the received art historical sense. “I want to paint what is real now,” explains Wafer, whose signature color is black. “Not a personal now but a wider picture of a current reality, using multiple sources, old and new.” Mentored by painter Penny Siopis, Wafer, a former police reservist, has in her most recent paintings fixated on the louvered facades of the Johannesburg Central Police Station, a modernist building associated with numerous apartheid-era abuses. Wafer’s large abstracted paintings attempt to give painterly form to the “swing between chaos and systemic violence” that is a hallmark of shoddy local policing.
Sean O’Toole
Related Stories