11 Artists to Watch at Frieze London

Molly Gottschalk
Oct 6, 2016 7:10pm
The 14th edition of Frieze London is well underway. The contemporary fair has been a longstanding launchpad for the most promising young artists—with standouts from last year,
Mira Dancy
and Rachel Rose among them, having gone on in the following months to be some of the most talked-about new names. This year, while the fair’s Focus sector is not quite the deluge of art from previously unseen twentysomethings that we’ve seen in the past, a handful of new names mix with strong showings by artists on the rise, making for enough discovery to keep us busy through the fair’s run and into the fall season. 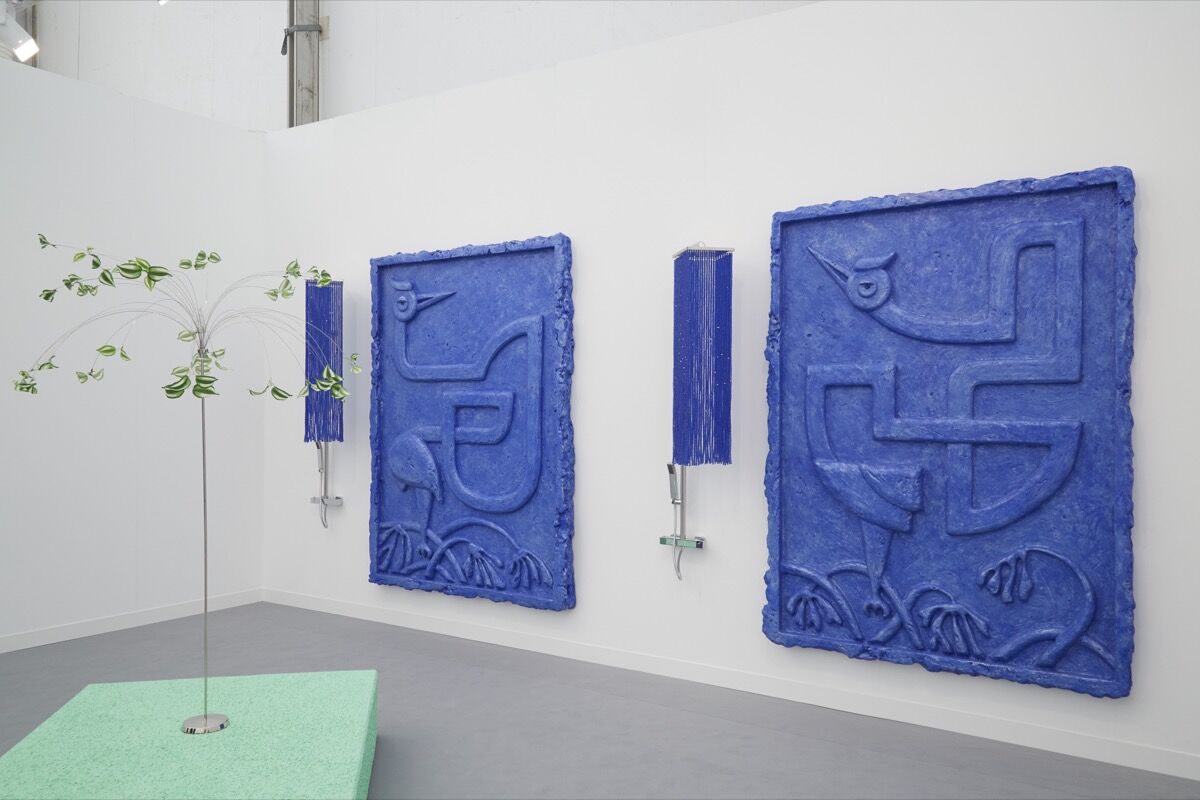 Installation view of works by Yu Honglei at Antenna Space’s booth at Frieze London, 2016. Photo by Benjamin Westoby for Artsy.

Young Chinese artist Yu is best-known for his video work—like the stunning installation that first caught our eye at LISTE in 2015—but this solo booth with Antenna Space demonstrates his equally nimble hand at sculpture. Two giant blue relief panels, titled after Chinese rivers and each featuring an elegantly carved, twisting crane, are paired with showerheads yielding sparkling, cascading beaded curtains. According to director Simon Wang, the works were inspired by
Henri Matisse
and “connect day-to-day objects with art-historical objects, and Chinese visual culture with ancient mythology.” From the series of seven rivers, each in an edition of two, the gallery had sold two works (Black Dragon River and Pine Flower River, both 2016 and $18,000) by the afternoon of opening day, including one to M Woods co-founder Michael Xufu Huang, as well as Technomed director and collector Mauro De Iorio. 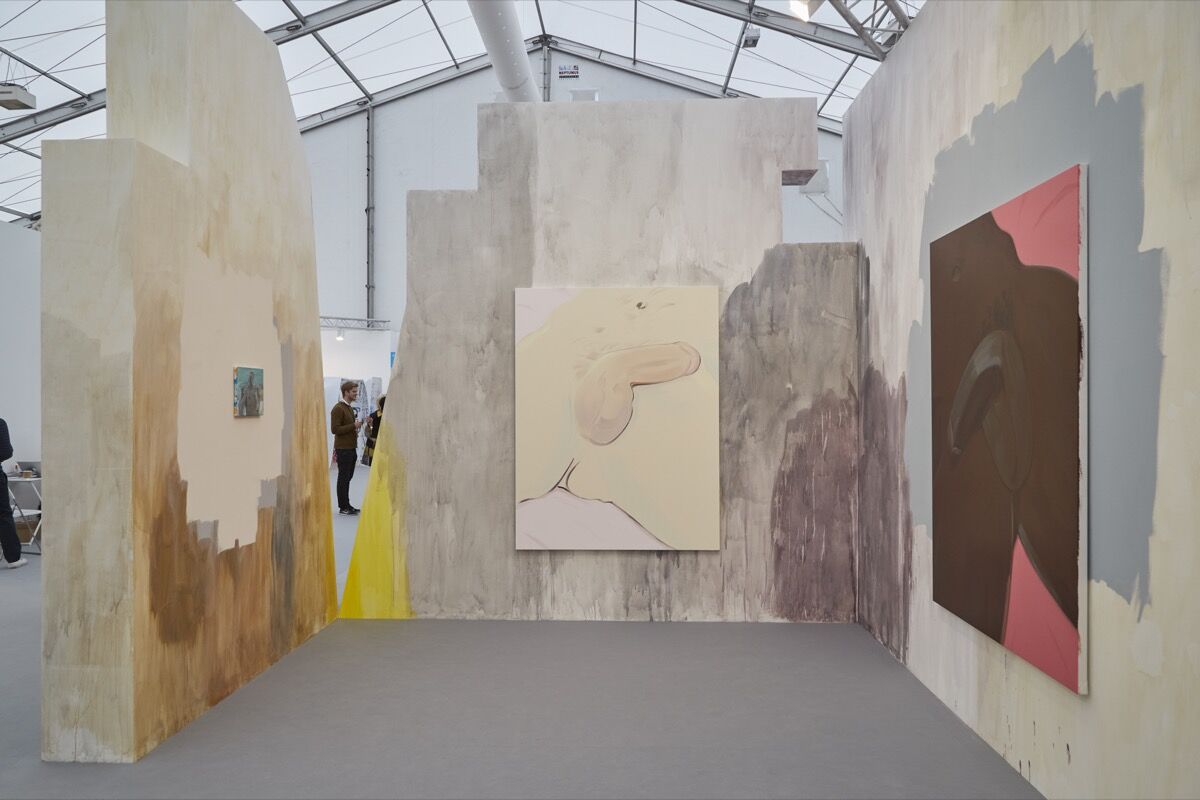 Installation view of works by Celia Hempton at Southard Reid’s booth at Frieze London, 2016. Photo by Benjamin Westoby for Artsy.

Advertisement
Three years ago, the young British artist Hempton, hard-pressed to find new sitters for her portrait paintings, turned to chat rooms—initiating what would become her best-known work. For her ongoing series “Chat Random,” (2014–present), Hempton connects with random men via webcam on Chatrandom.com, and, wielding both keyboard and paintbrush, paints her interactions. The artist’s work takes center stage at Frieze London, where a solo booth—filled with pastel and close-up views of male genitalia—has been painted floor-to-ceiling by Hempton and has been filled with collectors from fair open to close. 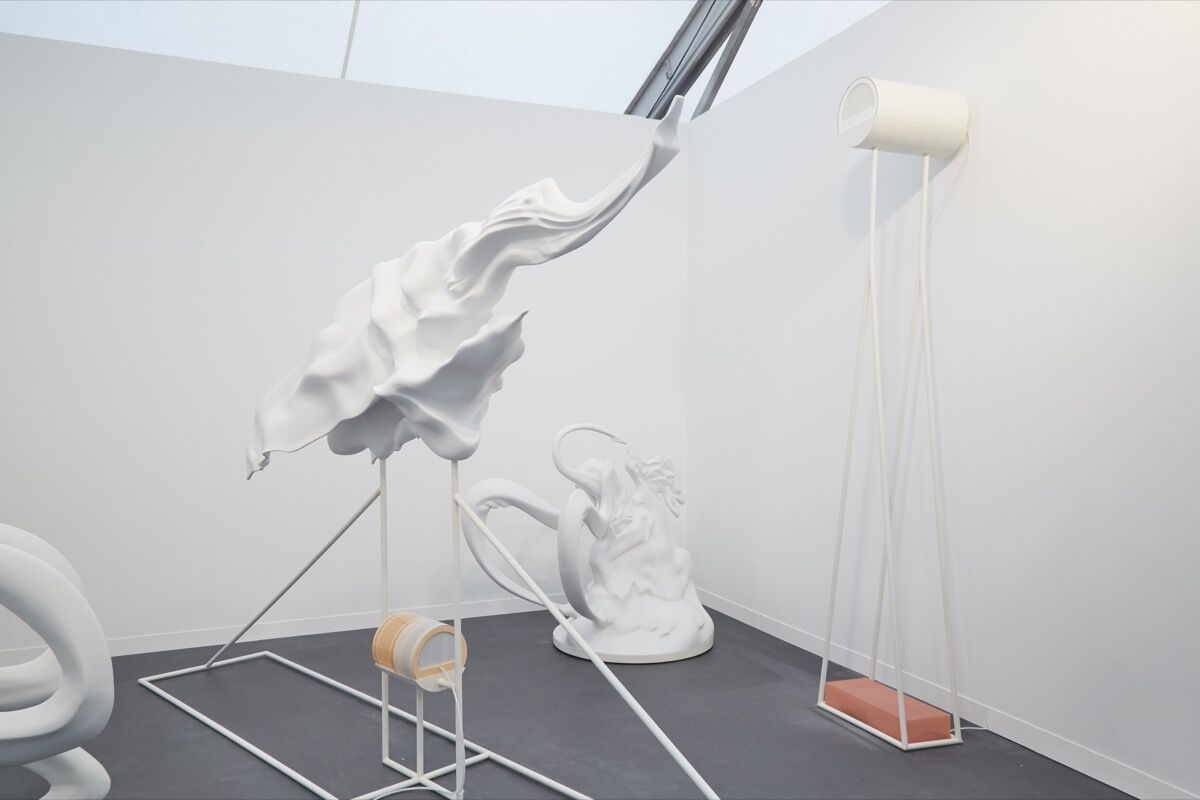 Installation view of works by Marguerite Humeau at C L E A R I N G’s booth at Frieze London, 2016. Photo by Benjamin Westoby for Artsy.

This young French artist has had an excellent year, marked by a standout solo exhibition at the Palais de Tokyo this past summer that enacted the mourning ritual of 10 to-scale mammal sculptures around their dying elephant matriarch. “We got the stamp of approval from the Tate this morning,” said C L E A R I N G founder and director Olivier Babin, who noted that the London museum had snapped up a work from the Palais de Tokyo exhibition in the fair’s first hours. The sculpture, ENID, a female engineered to cry out of sadness (2016), features a female elephant equipped with a hydraulics system that contains three drops of Thailand-sourced elephant tears.
According to Babin, the sculptures at Frieze (priced around $50,000 apiece) are the epilogue of the show, depicting mammals in the age of the Anthropocene—two female creatures feed on their own milk, both poisoning and starving themselves at the same time; an elephant picks and eats the last flower on earth. “She has a lot of truly sincere drive,” said Babin, who has been working with Humeau for the last year. Next Friday, the show will travel to Nottingham Contemporary, where it will be up through January 2017. 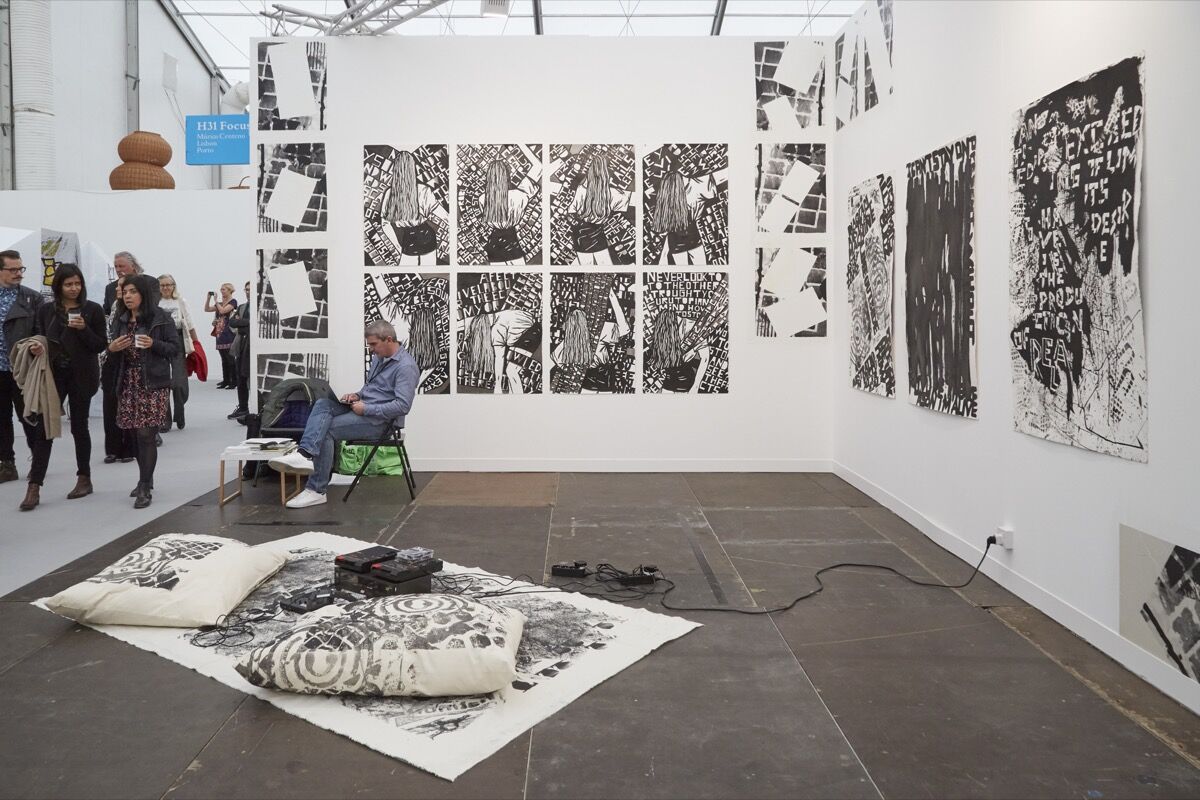 Installation view of works by Carla Filipe at Múrias Centeno’s booth at Frieze London, 2016. Photo by Benjamin Westoby for Artsy.

For the past two years, 43-year-old Portuguese artist Filipe has been feverishly documenting the electronic club scene in Porto, the spoils of which can generally be seen in the hundreds of stream-of-consciousness drawings scattered across her studio. In a solo booth at Frieze, her experience in Porto’s underground nightclubs is manifested in striking black-and-white India ink drawings and prints—impressions of the city’s stone grounds plastered to the walls like wheat-pasted posters; portraits of herself presumably dolled up for a night on the town; and abstracted, graphic text evoking the underground attitude of a 1970s poster for the punk band Black Flag. “She’s still not very well-known, but has had a lot of momentum this year,” noted director Nuno Centeno, who’s brought work in the range of €10,000–20,000 with hopes of building on the curatorial interest that the artist has seen recently—including Johan Volz tapping her for the São Paulo Biennial.

Available at: The Breeder 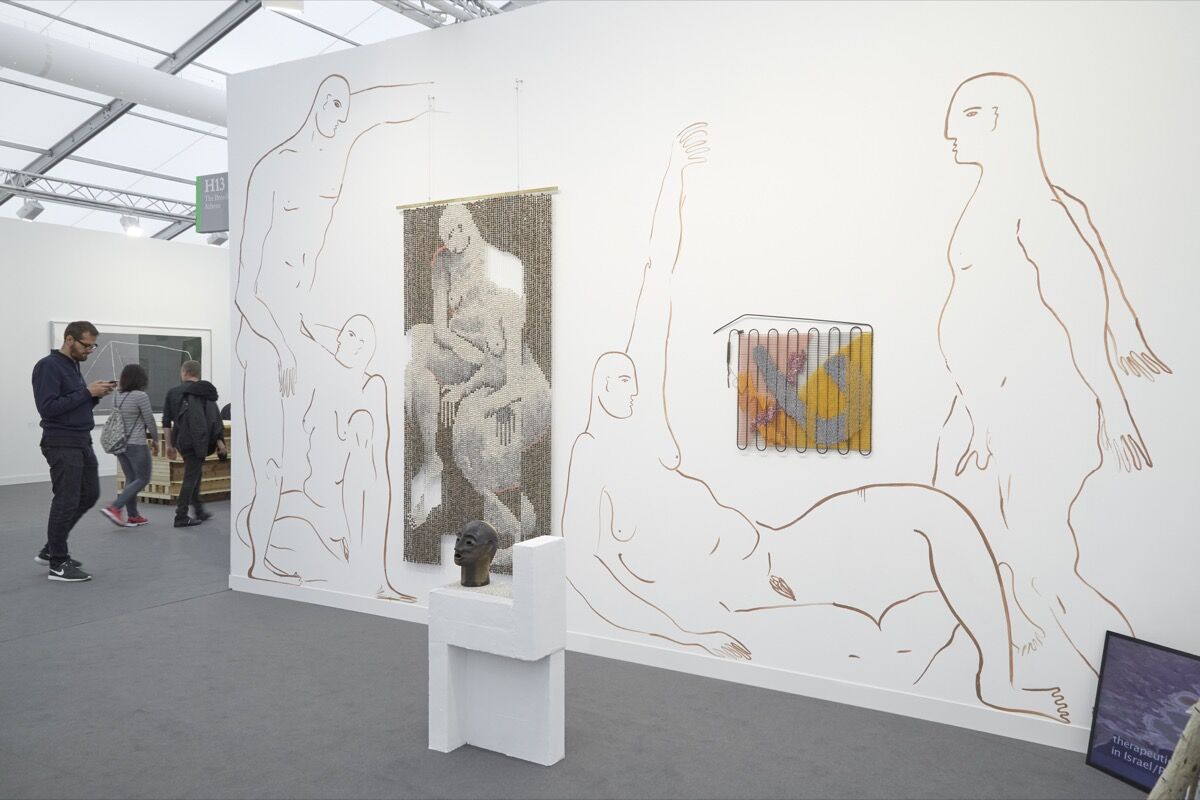 Installation view of works by Zoë Paul at The Breeder’s booth at Frieze London, 2016. Photo by Benjamin Westoby for Artsy.

Paul’s work is the product of her complex identity. She is British, with South African ancestry, and grew up on the Greek island of Kythira. The social histories and characteristics of these locations coalesce beautifully in the Breeder’s booth at Frieze London. A wall-hung wool tapestry, woven across a discarded refrigerator grid, is part of what is perhaps her best-known body of work, inspired by the introduction of the appliance to the Mediterranean climate of her youth. “When refrigerators first arrived, it totally changed the dynamics of society,” said the gallery’s co-founder and director George Vamvakidis, who discovered her work two years ago. “She’s really interested in how technology changes social behavior.” It was the beaded curtain nearby, fired from clay that the artist collected on a remote beach in Kythira, however, that drew particular attention. Titled Suppliant Branches at my Knees (2016) and priced around $18,000, the work was on hold with a European private collection as of Wednesday. 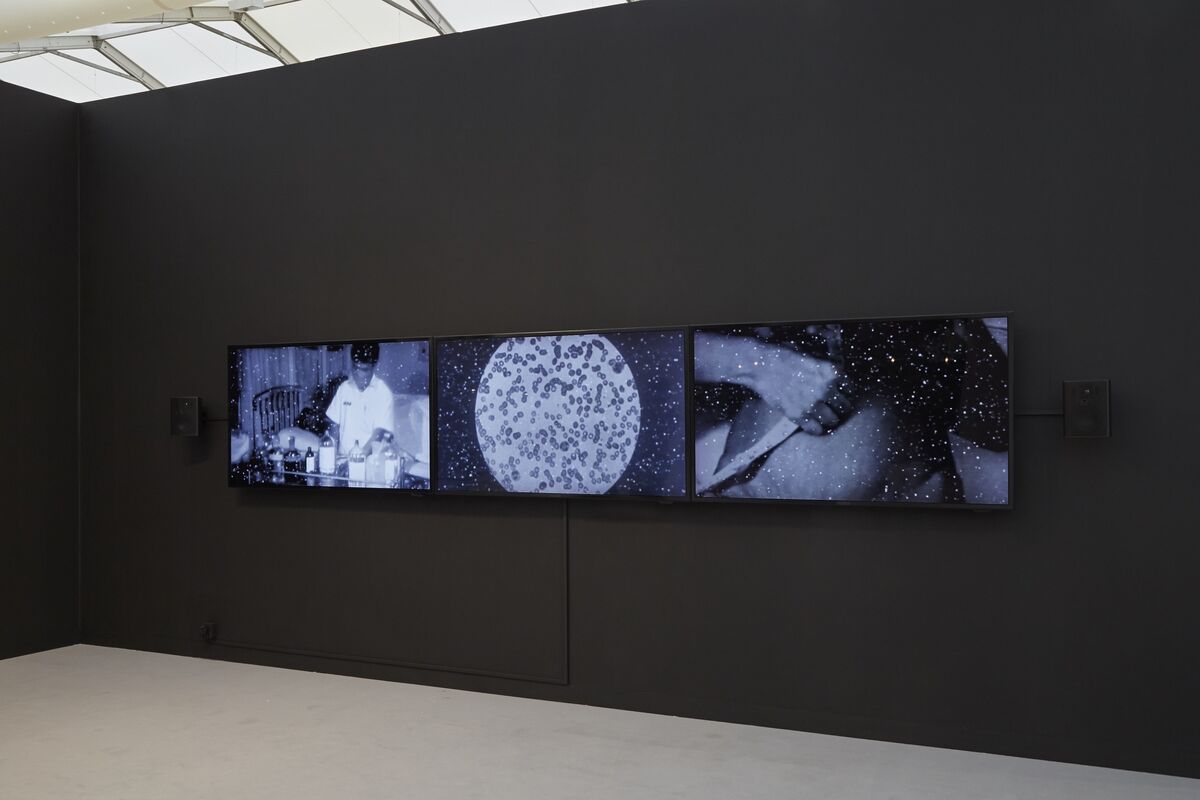 Installation view of works by Yin-Ju Chen at Chi-Wen Gallery’s booth at Frieze London, 2016. Photo by Benjamin Westoby for Artsy.

Taiwanese artist Chen’s three-channel video installation Action at a Distance (2015; $25,000)—after Einstein’s description of quantum entanglement as “spooky action at a distance”—hinges upon our interconnected universe. The roughly nine-minute film combines archival footage of protests in Indonesia, documentation of surgical procedures, and footage of the cosmos from NASA to ultimately “show how human violence is connected to the universe,” said the gallery’s founder and director, Chi-Wen Huang. “It’s all related to what’s happening in the world in this social and political era.” Of the 39-year-old artist, whose interest in the cosmos traces back to her tarot-card reading practice, Huang added, “She’s the artist of this time, and people are looking for the future.” 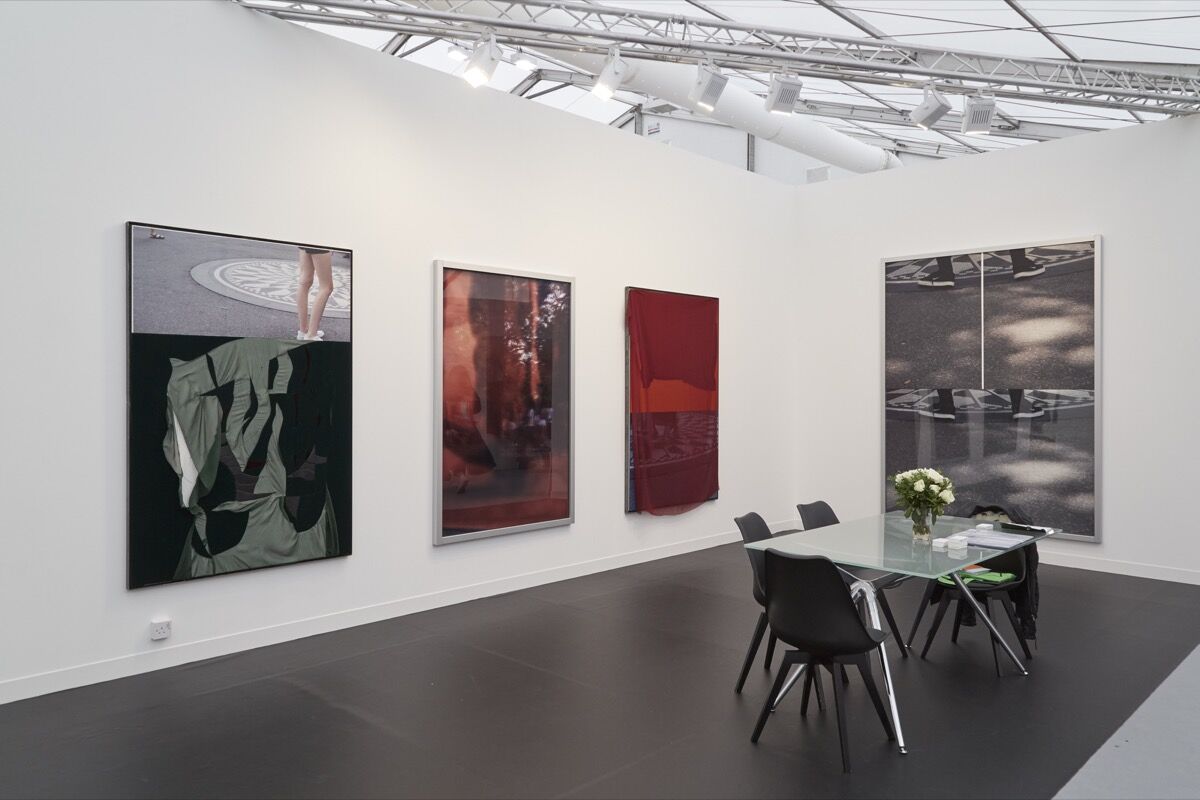 Installation view of work by Rose Marcus at Night Gallery’s booth at Frieze London, 2016. Photo by Benjamin Westoby for Artsy.

Bronx-based artist Marcus takes New York City as her subject matter—specifically, the city’s iconic public spaces and the class systems its architecture creates. The artist’s solo presentation at Frieze London continues her 2015 work around Central Park with a focus on Strawberry Fields, the memorial to the late John Lennon some 100 feet from where the former Beatle spent the last years of his life, and where he was killed in 1980.
According to gallery partner Davida Nemeroff, this series of large-format, mixed-media images (priced in the range of $8,000–15,000) convey the desire for an empty signifier: “We are so far away from the generation when he died,” she said, and yet “so many people are kneeling on it, it’s receding into the ground.” Within the booth’s four works, the gallerist notes, art-historical references abound—
Cézanne
’s dappled light,
Frankenthaler
’s mark-making seen in a bold swath of maroon fabric,
Andre
’s insistence that we walk on art conveyed through the image of a pair of sneakers atop the iconic “Imagine” mandala at Strawberry Fields. 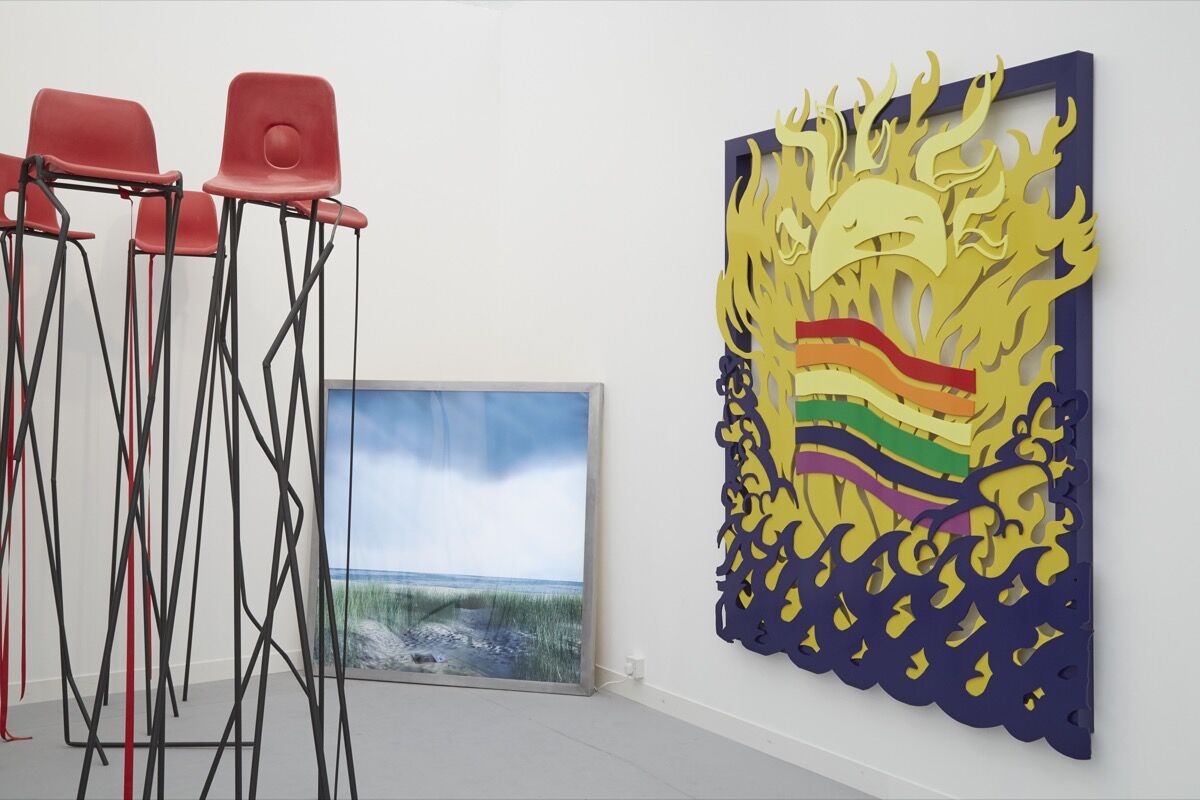 Since graduating from Goldsmiths in 2014, 24-year-old artist and activist couple Quinlan and Hastings have been reclaiming space for queer subcultures across the U.K. The duo is perhaps best known for their ongoing project and event series, @Gaybar, which creates inclusive spaces for LGBTQ communities to congregate in London (a city that’s seen an estimated 25 percent drop in such spots since 2008). “They’re looking at gay bars and how they are diminishing,” said Arcadia Missa director Zhoe Granger.
Following a road trip spanning 170 gay bars across 13 cities in the U.K., the duo unveiled an archive of footage shot on a GoPro and using CGI video—in bars, saunas, nightclubs—at London’s Somerset House this past summer. As these spaces decline in the physical world, Granger said, “they’re creating a utopian space where they can otherwise expand.” But alongside their roles as activists, the duo maintains a traditional studio practice as well. Don’t miss their laser-cut sculpture in the Focus sector of Frieze London, Altitude (2016), which can be had for around £10,000. 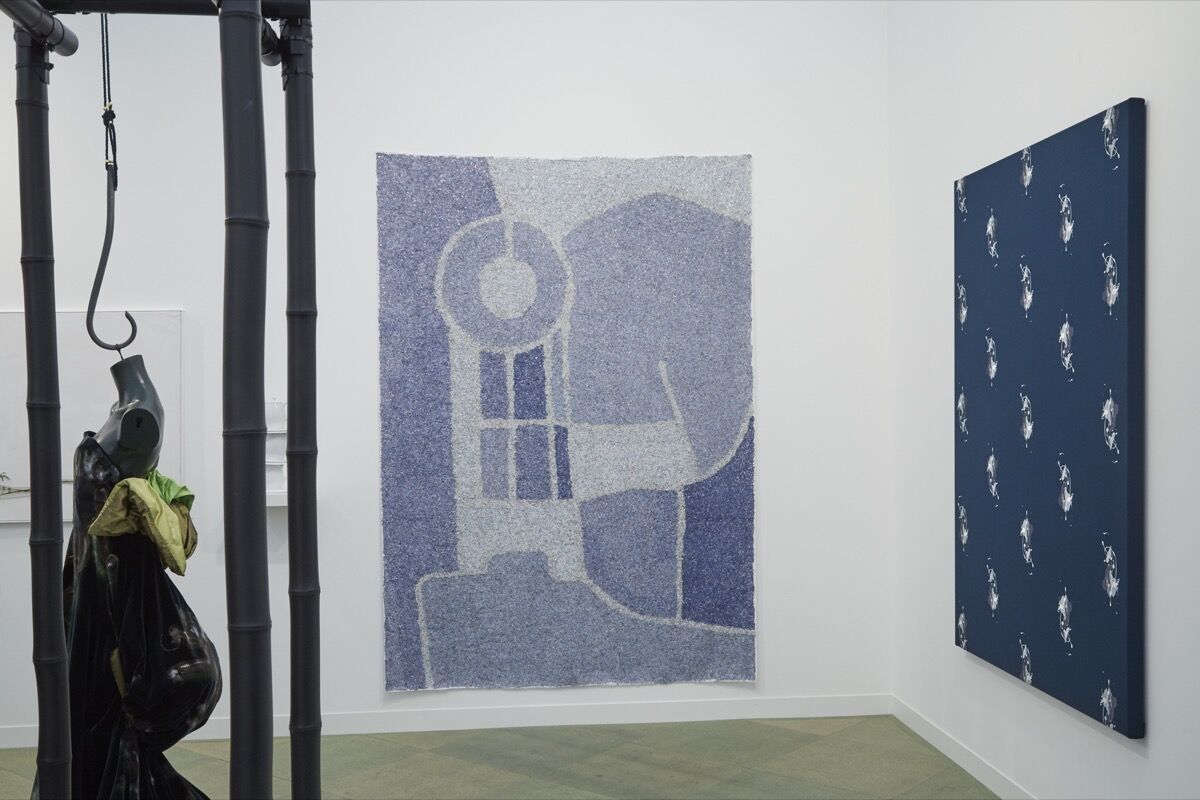 Installation view of work by Jochen Schmith at VI, VII’s booth at Frieze London, 2016. Photo by Benjamin Westoby for Artsy.

The use of artistic labor by luxury industries is a favorite subject of Jochen Schmith, a trio of University of Fine Arts Hamburg grads who have been working together since 2000. Despite significant airtime across German institutions, however, they’ve “been very much under the radar” beyond their home soil, noted the gallery’s founder Esperanza Rosales of the impetus for this first outing at Frieze.
At the fair, a 2016 series of untitled works sees splatters of paint—taken directly from those “painters pants” sold by Dolce & Gabbana, Ralph Lauren, or Helmut Lang in the early ’90s—embroidered on cashmere. “They’ve decided to take that use of artistic labor back,” said Rosales, “to put it back into the form of an artwork, rather than a commodity.” Nearby, Picnic Blanket (2016), an abstracted image made with two bags of shredded money the group found outside of a bank in Germany, reads as a birds-eye view of an imagined park. 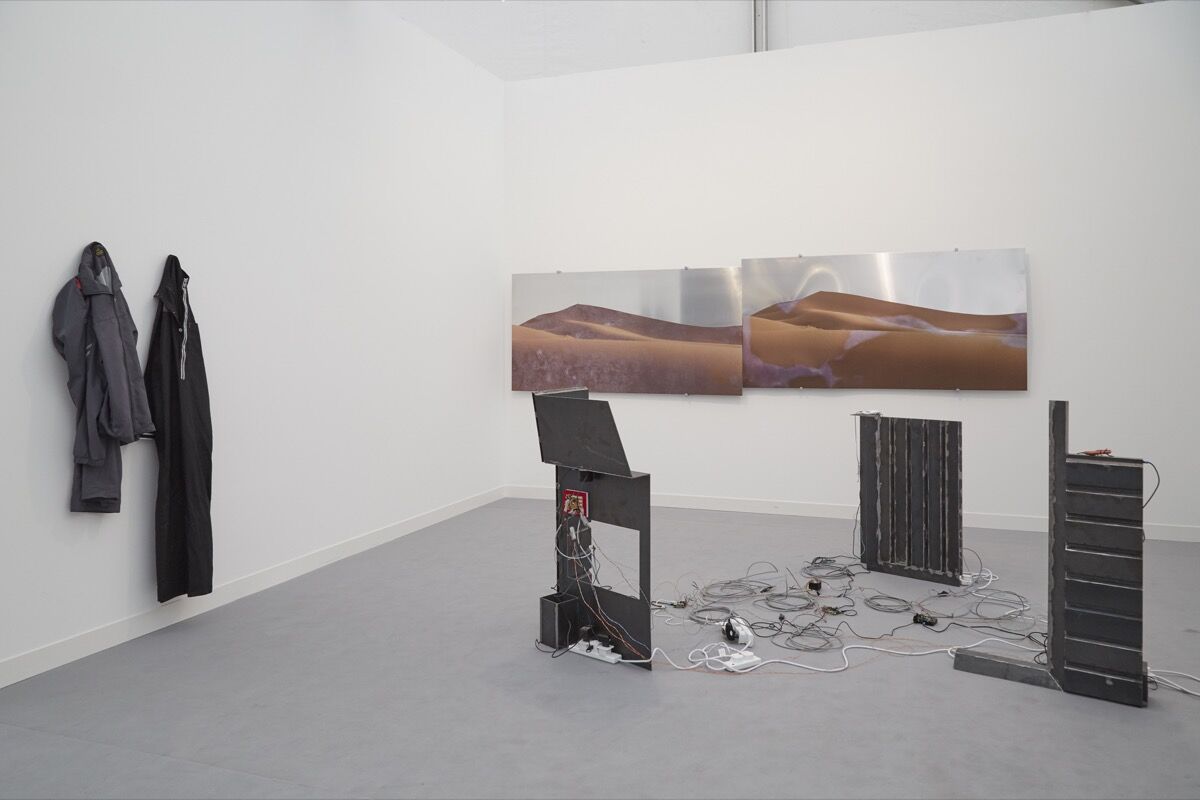 Following conversations with Bedouin cab drivers in the tourist areas of Egypt’s politically contentious Sinai Peninsula, Allah embarked on a daring mission. The New York-based artist, who was raised in Israel, paid to insert himself into a Bedouin smuggling network, culminating in a first-person film montage that debuted at the New Museum Triennial in 2015. According to Green Art Gallery’s Nadine Khoury, Allah’s installation at Frieze London “extends this journey.” Fascinated by the Bedouins’ airtight method of communication via 2G cellular network, the artist worked with engineers in Palestine to create his own 2G apparatus. In his solo booth with Green Art Gallery, three Samsung cell phones, connected through a tangle of wires and cords and displayed on metal plinths, intermittently call one another, broadcasting recorded and otherwise untraceable conversations between Bedouins into the fair. 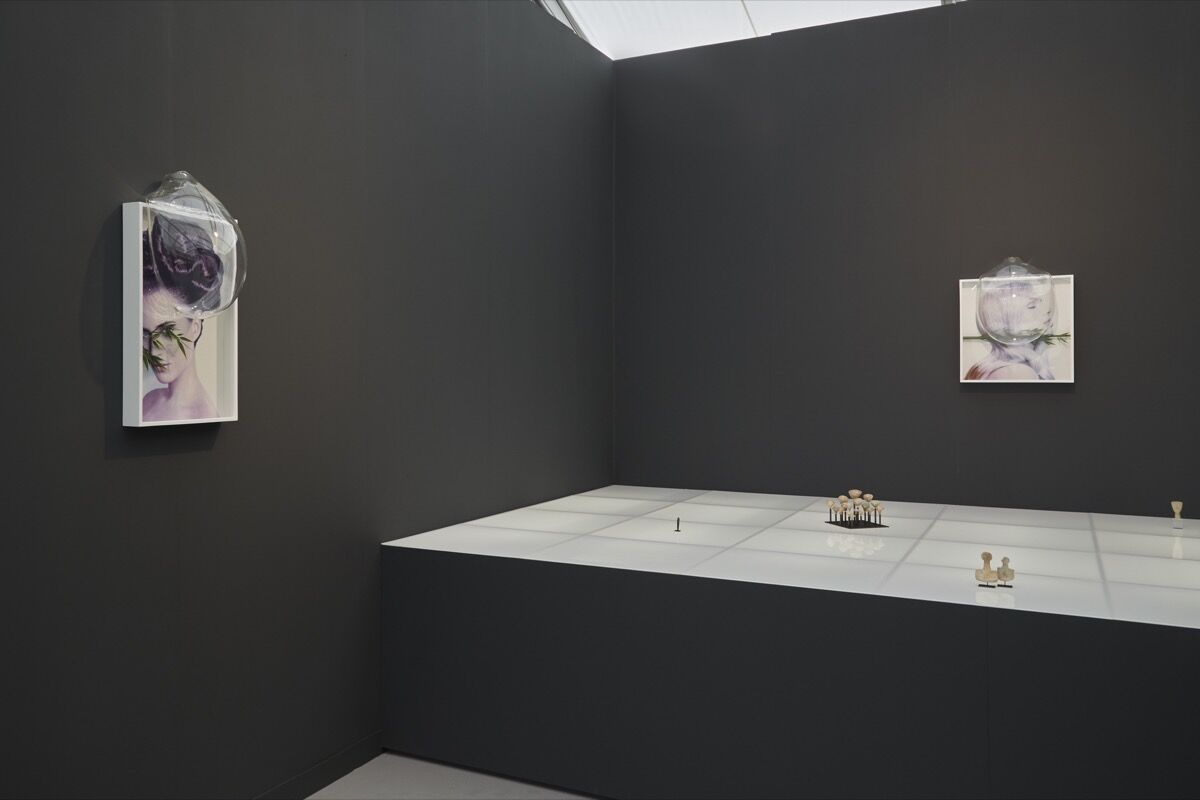 Installation view of work by Gabriele Beveridge at the CHEWDAY’S booth at Frieze London, 2016. Photo by Benjamin Westoby for Artsy.

Beveridge is by no means a new name in the U.K. The young London-based artist’s sun-faded photo collages and installations were a hit of the Zabludowicz Collection a few years back—but her presentation with the 11-month-old London gallery CHEWDAY’S, which debuts at Frieze London, is poised to bring her back into the spotlight. The booth, which opened on the heels of her solo show with CHEWDAY’S, sees three photo-based assemblages made with posters pulled from hairdresser shop windows, such as the woman with a flawless maroon Vidal Sassoon-like bob and dewy skin who peers out beneath a hand-blown glass orb.
Molly Gottschalk is Artsy’s Lead Visuals Editor.
Related Stories

The 20 Best Booths at Frieze London 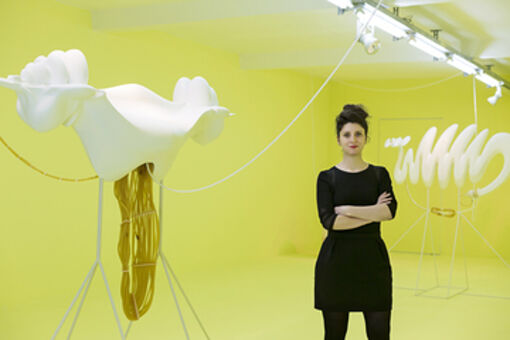 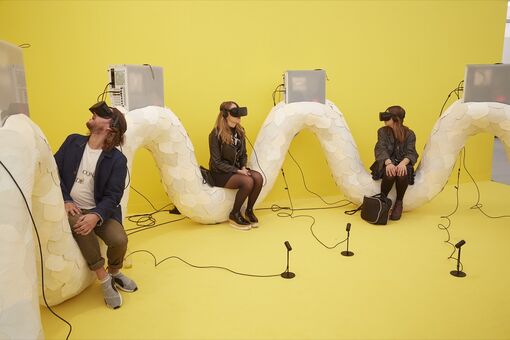 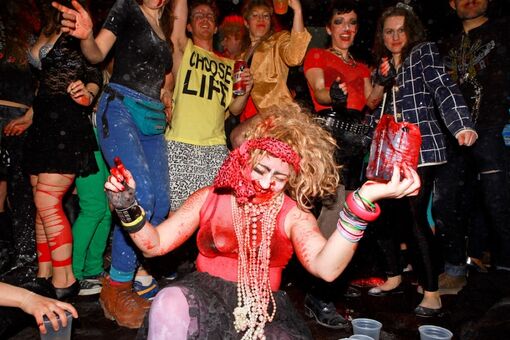