12 Artists to Watch at Artissima 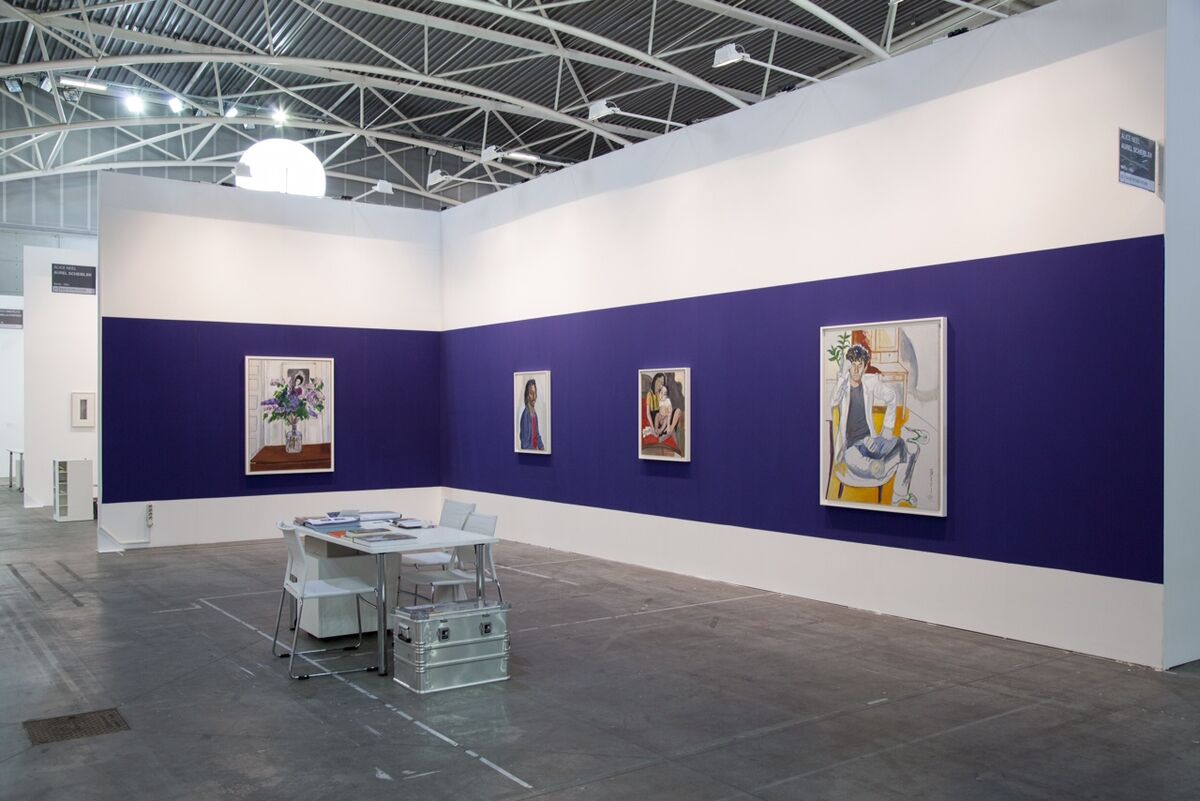 Installation view of Alice Neel at Aurel Scheibler’s booth at Artissima, 2015. Photo by Malcolm Varon, courtesy of the Estate of Alice Neel.

The 22nd edition of Artissima opened in Turin with 207 galleries from 35 countries. Wandering the aisles of such a big art fair can feel like visual information is whizzing by in a flash of boxes, colors, and hashtags. But Artissima is devoted specifically to research and experimentation in art, and having that focus makes it more enjoyable to browse. The spirit of experimentation runs deep in Turin—one of the birthplaces of
Arte Povera
—and the city’s collections and institutions take a certain amount of pride in that avant-garde heritage. The fair reflects that history by juxtaposing such sections as Present Future—a selection of contemporary emerging talent—alongside Back to the Future, which spotlights avant-garde artists from 1975 to 1985. Also relevant is a curated performance program called Per4m. Some of the best work on view at Artissima often bridges or bisects past and present. Below we highlight 12 artists behind some of the strongest work on view there this year. 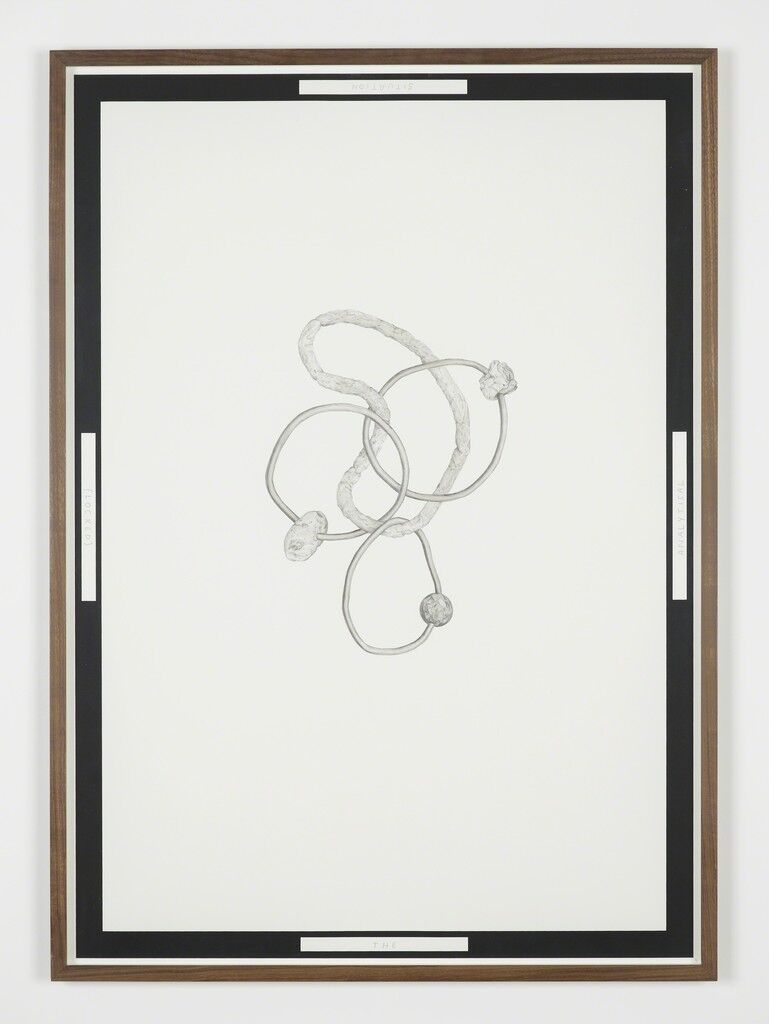 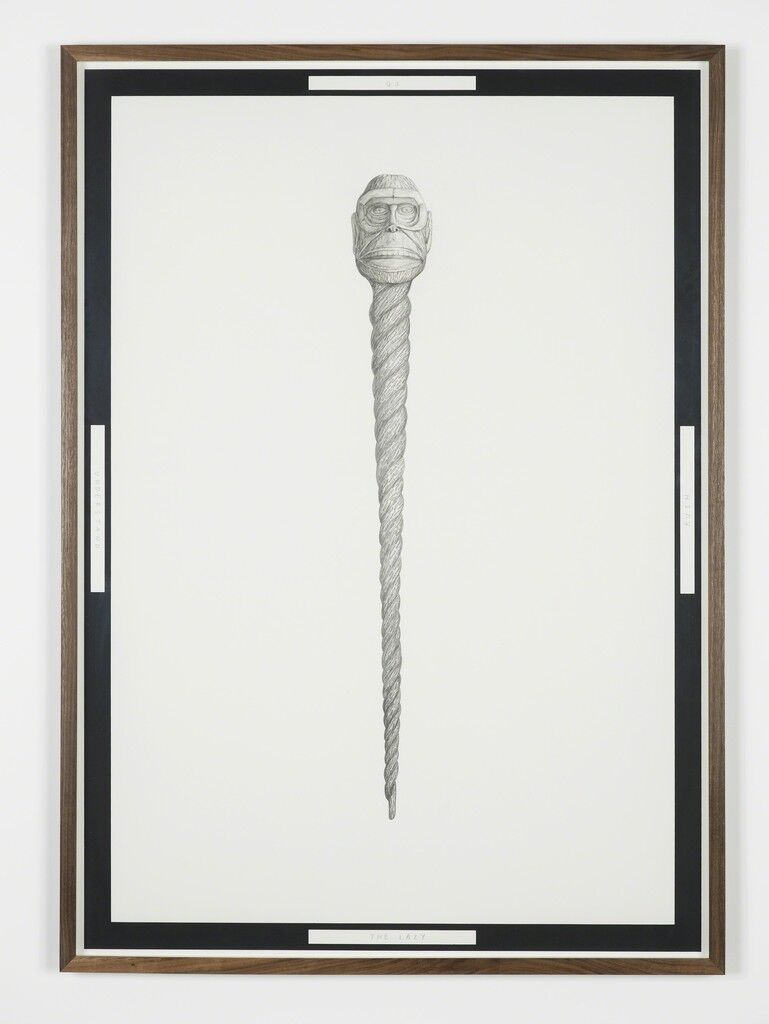 Kit Craig
The Lazy Rush To Understand, 2014
Arcade
In the Present Future section at Arcade, Craig exhibited a skillfully rendered set of delicate graphite drawings on paper, as well as a floor work. The British artist digs into the complexities of space by illustrating sculptural forms in two dimensions. Enigmatic phrases are written on an internal frame, creating a double framing of unresolved questions. In Analytical Situation (Locked) (2014) three disconnected rings are bound by a different, fourth one, calling to mind Jacques Lacan’s use of knots as a metaphor for psychoanalysis. Meanwhile, in The Lazy Rush to Understand (2014), which shows a unicorn horn topped by a gorilla’s head, Darwinian narratives are mapped out on the wall. A floor sculpture titled Spike (2014) consists of a grid of concrete embedded with geometric shapes made of jesmonite that refer to markings made on theater stage floors. The symbols read like gestures, activating the space they inhabit. 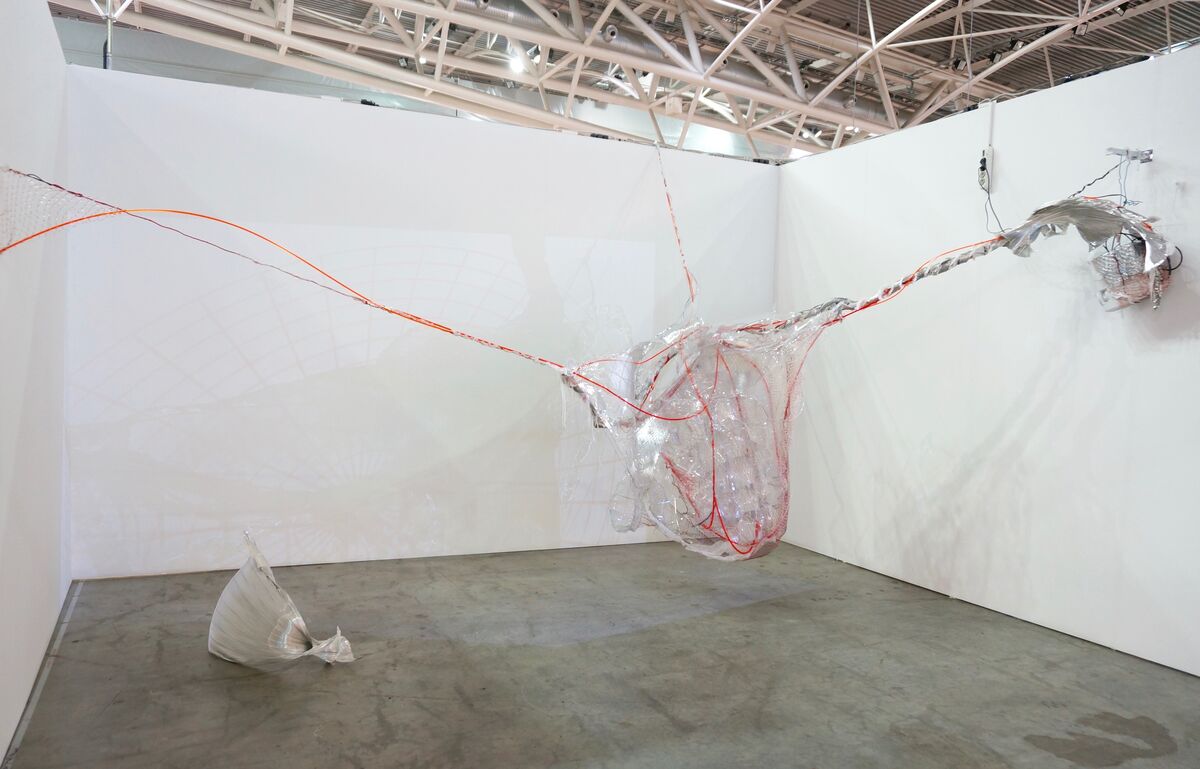 Advertisement
Latvian artist Grantina launches a futuristic sci-fi space at Galerie Joseph Tang, through an impressive, pulsating installation called House of Throat (2015). Grantina forms a biomorphic entity out of melted plastics, acrylic piping, nets, and Fresnel lenses. The work is suspended between the ceiling and floor, held taut by knotted cables that reach out like tentacles. One of cables engages a projector, which casts light back upon itself to create a breathing shadow on the far wall. On either end, cut pieces of ventilation tubing are warped into shapes reminiscent of fish gills or bird wings, as if the entity might swim away or fly back into the parallel world it came from. 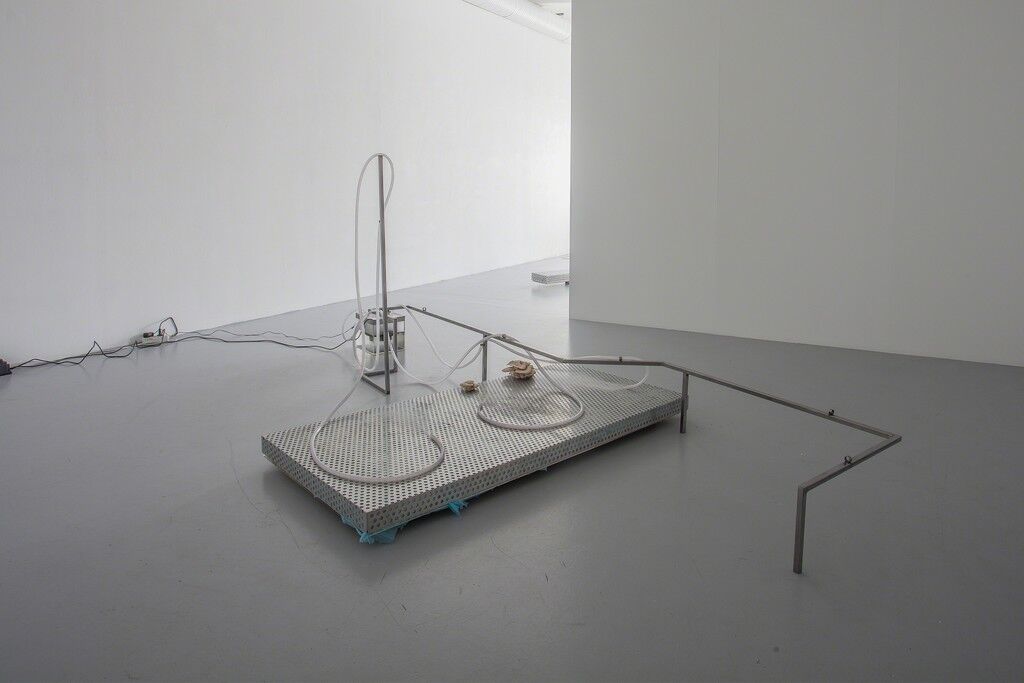 Isabelle Andriessen
The Mesh - strange strangers between life and non-life, 2015
CINNNAMON
An installation at CINNNAMON similarly evokes the extraterrestrial, however it includes actual living organisms. Exploring philosopher Timothy Morton’s theory of “hyperobjects” that transcend time and space, and Jane Bennett’s “vital materialism,” Dutch artist Andriessen embedded oyster mushroom spores into her minimalist sculptures and is growing them on site during the fair with a humidifying system. The work The mesh – strange strangers between life and non-life (2015) imagines an abstract dystopia in its simplest form, where all that is left is metal, plastic, and mushrooms to withstand the passage of time. 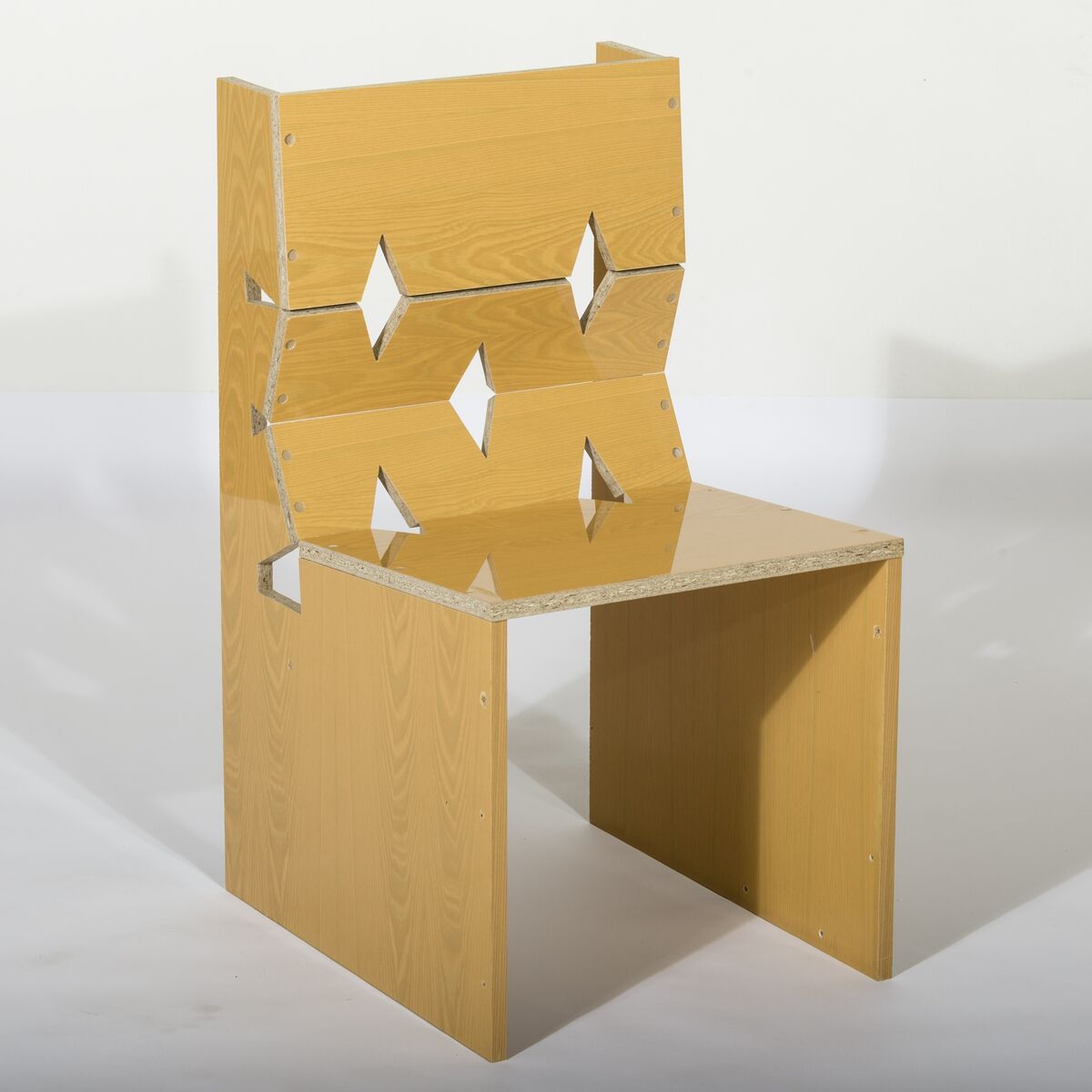 Dystopian idealism continues in the work of Polzin at the Brussels-based gallery Waldburger Wouters. The German artist envisions what the ideal world would be like if East and West Germany had reunited on equal standing. He finds discarded pieces of old furniture from each region, mostly made out of cheap compressed chip board, and sculpts them back together as defunct domestic objects, modeled in the likeness of modernist architectural designs. When reassembled, the materials lose their function, representing a utopian vision that can never be resolved. There is a dark, biting wit behind what otherwise might be mistaken for pleasant household furnishings. 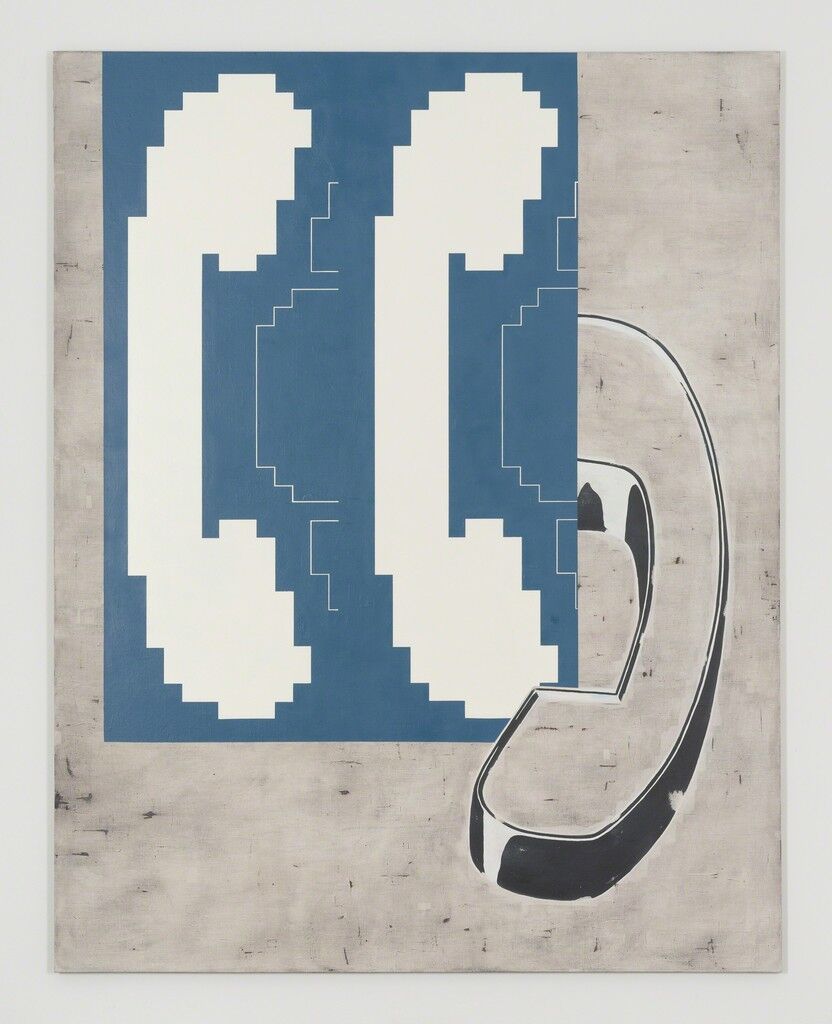 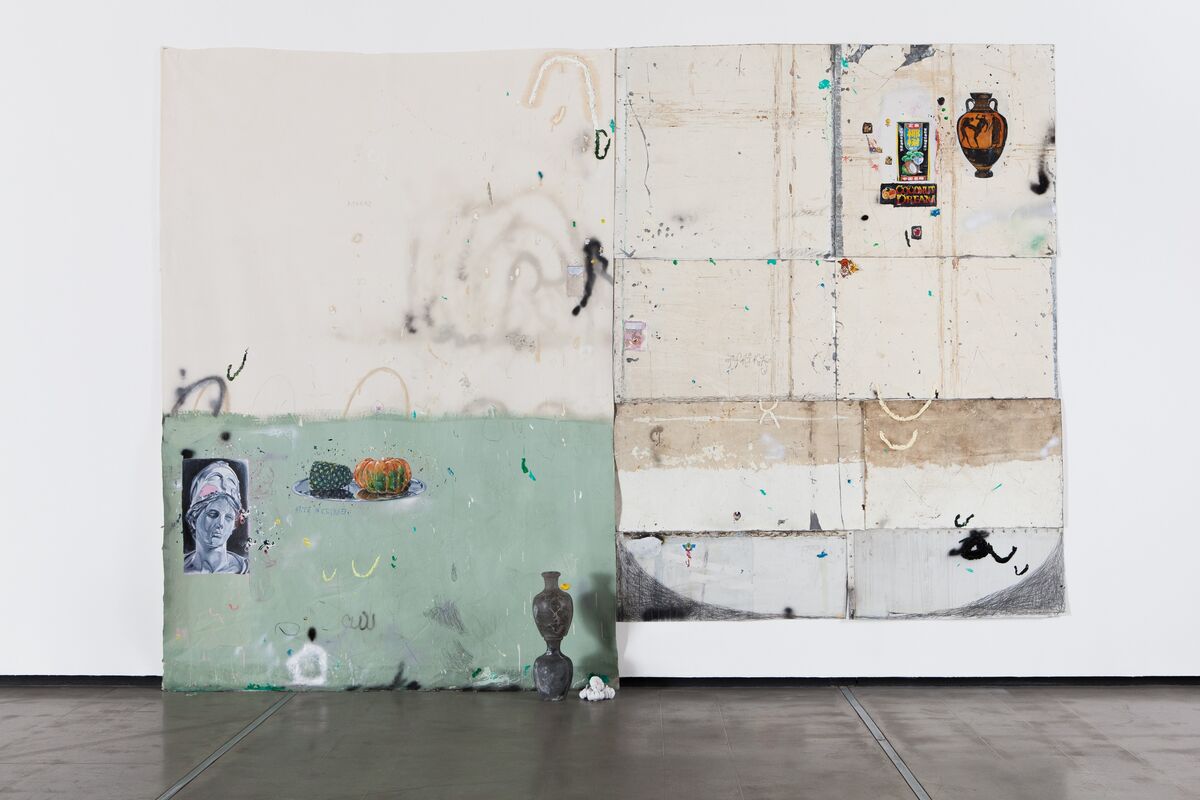 Working through the historical layers of graphics and cultural resonance, Brazilian artist Nimer Pjota exhibits a series of wall works made from found metal, butting up against painted canvas at Mendes Wood DM. Motifs from pop culture and historical artifacts are collaged or painted over the rough-hewn background. Painted objects like cast concrete fruit or broken ceramics casually accompany each work. Mixing images of pre-Columbian and Greek pottery, along with phrases from contemporary Brazilian street culture and superhero cartoons, Pjota uses psychosocial symbols to question the anthropological construction of the Americas. 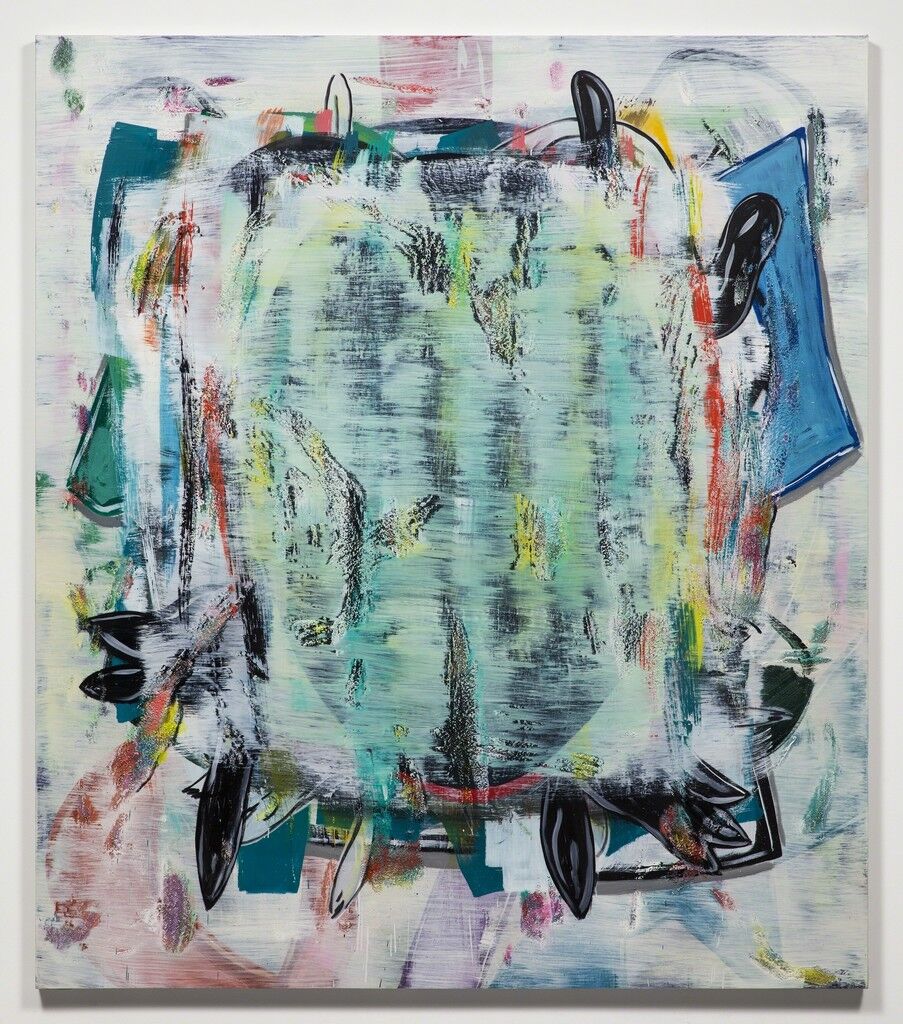 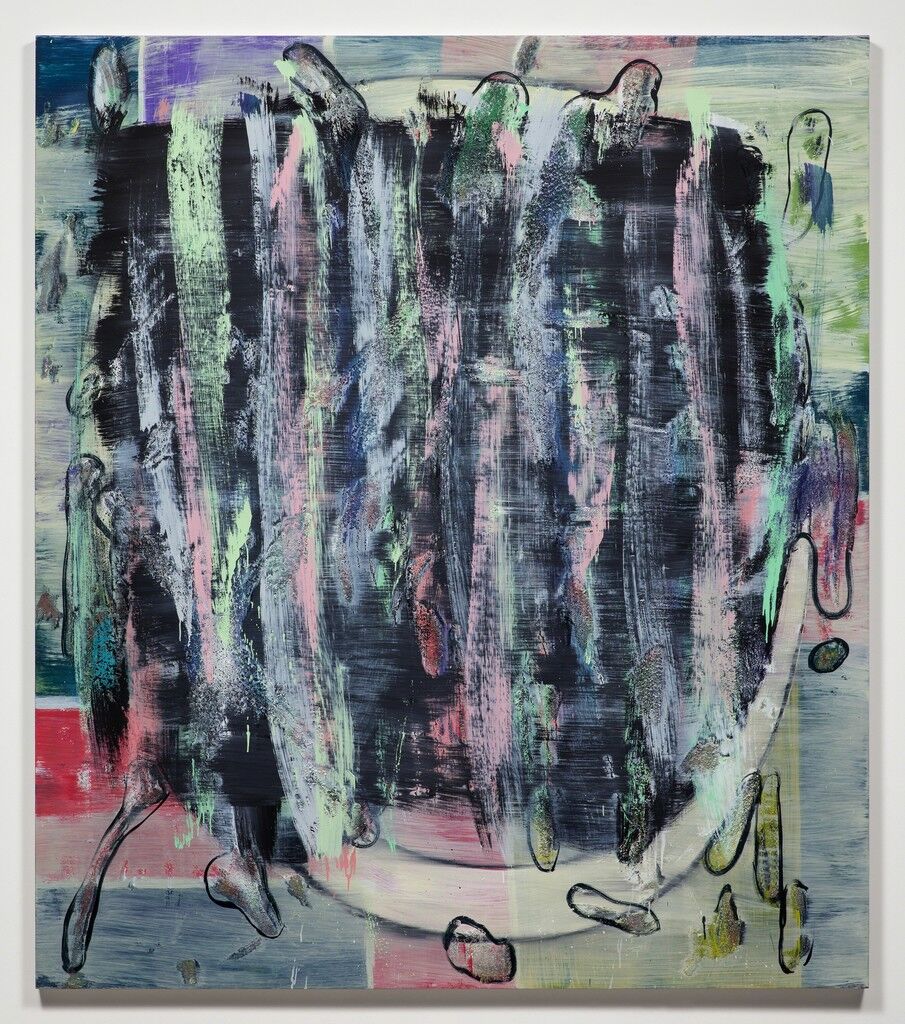 Jon Pestoni
Hot Lunch, 2014
Eleni Koroneou
At the Athens based Eleni Koroneou Gallery, textured paintings by American artist Pestoni vibrate with bright electric colors and thick layers. In works like Split Beaver (2014) and Hot Lunch (2014), remnants of layers painted in different styles can be made out around the edges as abstracted over-painting becomes more concentrated in the center. The canvas has been worked and reworked until it comes to rest in its final form, the memory nearly erased.

Galerie Bernard Ceysson, Back to the Future, Booth Grey 2

In the “Back to the Future” section, Galerie Bernard Ceysson put together a museum-style curated booth with work by Supports/Surfaces artists including Patrick Saytour, Louis Cane, Daniel Dezeuze, and Claude Viallat, whose art was tightly bound to Post-Structuralist theory. They were staunch essentialists when it came to the aesthetics of form and repetition, working often with bold block colors and geometric shapes, yet still allowing for elements of chance to unfold. Their dedication to exploring a singularity of vision in their practice is admirable.

Aurel Scheibler, Back to the Future, Booth Grey 23 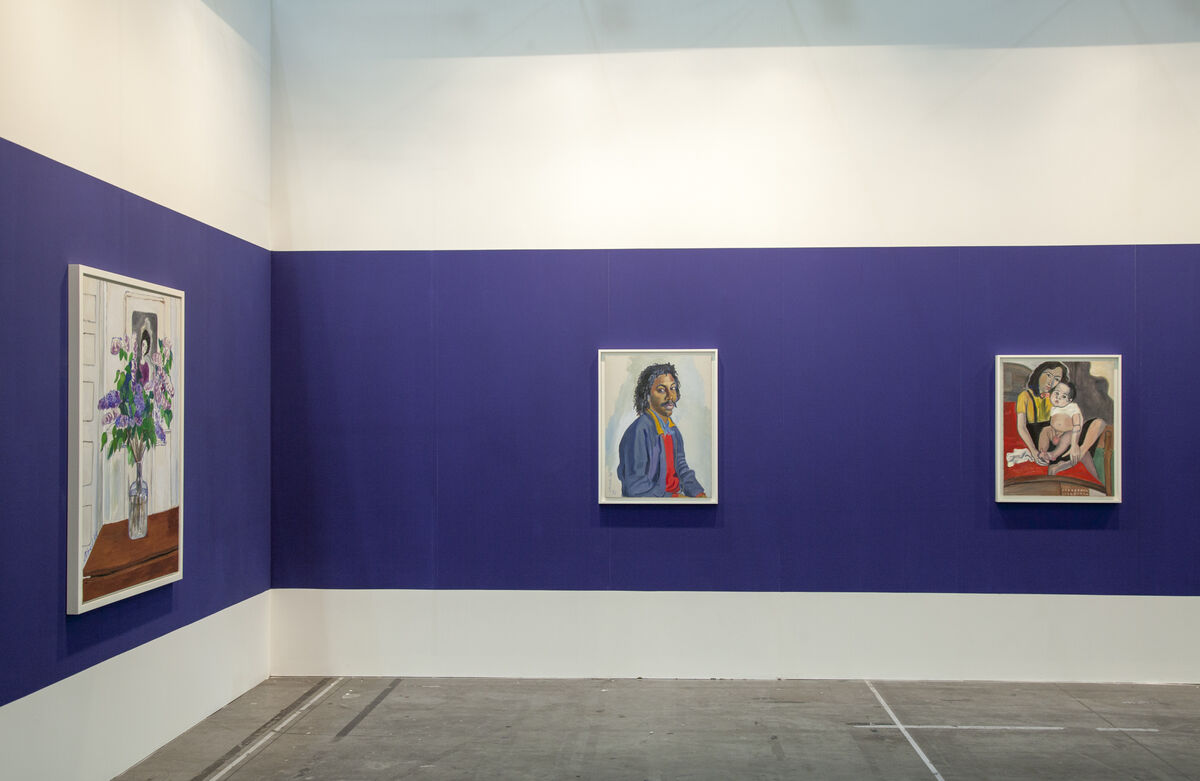 Installation view of Alice Neel at Aurel Scheibler’s booth at Artissima, 2015. Photo by Malcolm Varon, courtesy of the Estate of Alice Neel.

Lastly, a humble and elegant presentation of four works by Neel at Aurel Scheibler should not be missed. Lilacs (1983) was one of the last paintings she did before her death in 1984. Neel exemplifies the way an artist’s spirit lives on in the richness of the work. Perhaps she can be found, tucked away into the radiant blue hue of the shadows in Stephen Shepard (1978), or in the warm eyes of her dear friend Michel Auder (1980).
––Arielle Bier
Explore Artissima 2015 on Artsy.
Related Stories