Alina Cohen
Aug 3, 2018 8:00am
Over the past six decades, men have pulled dangerous, disgusting, and debauched stunts in the name of art. The resulting works involved human feces, self-harm, motor vehicles, and barnyard animals. In exhibitions and performances both critically acclaimed and reviled, men have proudly engaged in bad behavior.
Some of them simply perpetuated the symbolic associations that already link men with weaponry, motorcycles, and destruction. (Notably, many of these artists live, or lived, in New York. The city, perhaps, encourages such mythmaking and bravado.)
Here, we survey 14 artists who indulged in the macho, lewd, and risqué, whether that meant taking a bullet or tattooing a pig. If there’s any hallmark of macho art, it’s that—regardless of any ensuing controversy—it still helps to canonize its creators. As Oscar Wilde once said, “There is only one thing in life worse than being talked about, and that is not being talked about.” These artists all made work that is, indeed, difficult to ignore. 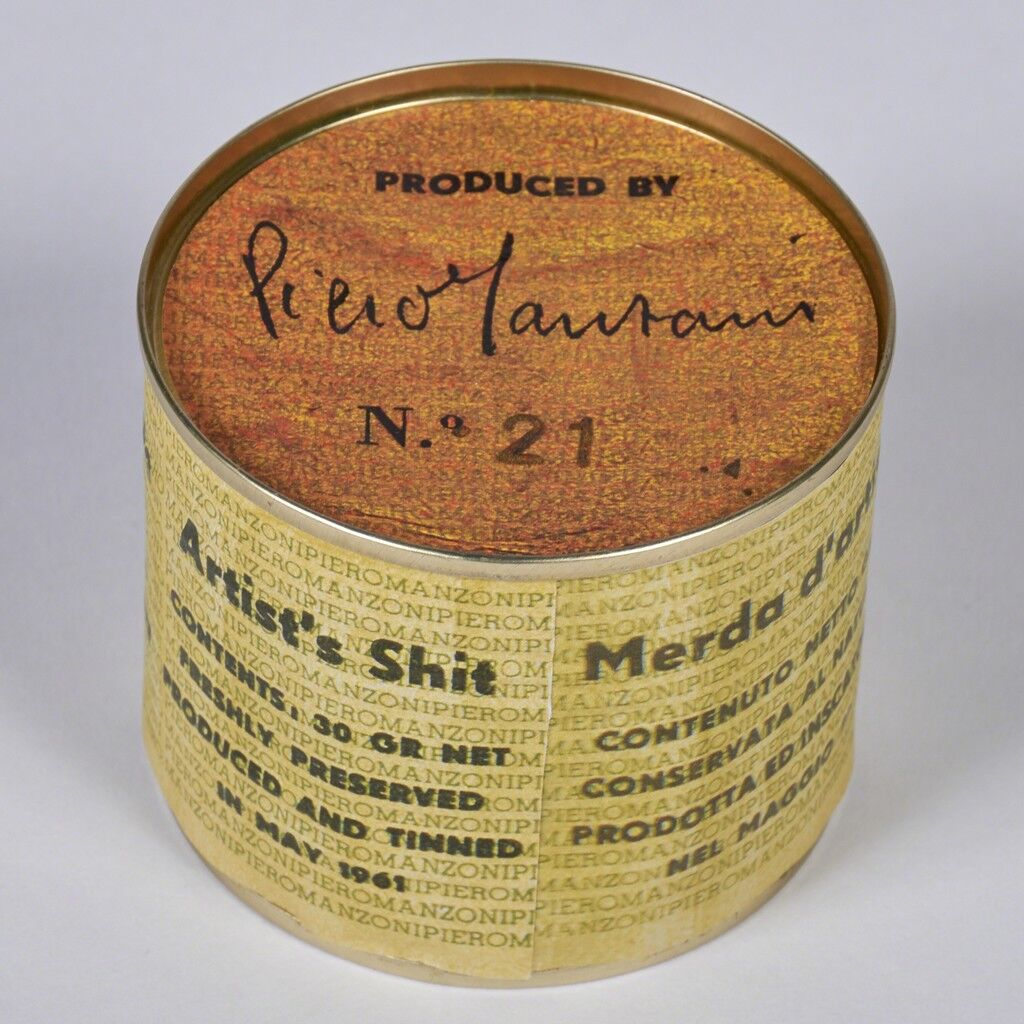 Piero Manzoni
Merda d'Artista, 2013
Doyle
Beginning in 1961, Italian artist Piero Manzoni began canning his feces and selling it, calling the series “Artist’s Shit.” Sure, there are some decent ideas embedded in the artwork: equating excretion to artmaking; fetishizing the artist; art as whatever an artist says it is; the perversion of the art market. But the work still jeers in the face of any critic, or art viewer, willing to take this veritable shit seriously (although, notably, some historians have doubted its authenticity). The enfant terrible also sold balloons, their price deriving from the simple fact that he’d breathed in them. 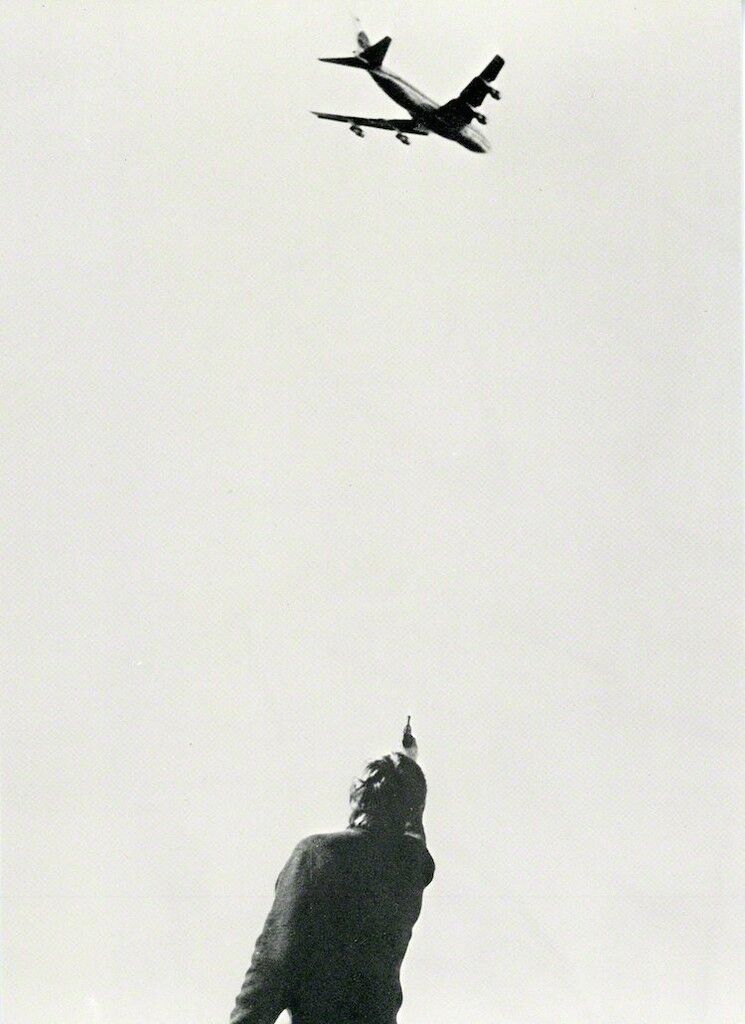 Chris Burden
Chris Burden, 747, Card, 1973
James Fuentes
Advertisement
At the height of
Performance Art
, University of California Irvine student Chris Burden asked a friend to shoot him in the arm with a .22 rifle. He titled the action Shoot (1971). The friend was supposed to just graze the artist’s skin. Instead, the bullet passed straight through. (Two years later, Burden would stage a second gun-related art outing; he went to LAX and shot at a plane flying overhead, calling the performance 747.)
These works, along with Trans-Fixed (1974), in which the artist crucified himself to a Volkswagen Beetle (nailing himself, through his palms, to the roof of the car), contributed to Burden’s reputation as the art world’s greatest daredevil. Even David Bowie took notice, referencing him in the song “Joe the Lion” (“Nail me to my car and I’ll tell you who you are”).
But sometimes age tempers even the wildest youth. In 2015, a writer for The New York Times tracked down the man who’d shot Burden. He was working as an accountant. Burden also calmed down over the decades. In 2008, he created Urban Light (2008) outside Los Angeles County Museum of Art. The piece, which features a grid of street lamps, greets museumgoers everyday—and is something of a cliché backdrop for international Instagrammers.

Call it the endgame of masturbatory art. In 1972, Acconci crouched under a low wooden ramp at SoHo’s Sonnabend Gallery for his now infamous performance, Seedbed. As visitors walked on the floor, the artist pleasured himself while narrating his fantasies. Projected through gallery speakers, they all invoked the audience’s movements: “you’re on my left . . . you’re moving away but I’m pushing my body against you, into the corner . . . you’re bending your head down, over me . . . I’m pressing my eyes into your hair.” The Metropolitan Museum of Art, which owns gelatin silver prints depicting the event, calls this a “seminal work.” Indeed. To be fair, it would be wrong to typecast Acconci for Seedbed alone; his diverse practice spanned poetry, sculpture, installation, and architecture with significantly more nuance and lyricism. When he died in 2017, he left behind a floating glass platform in Austria and a permanent installation of spherical chairs at Queens College, among other eclectic works. In his last three decades, he gave up performance art altogether in favor of architecture, founding Acconci Studio in 1988. 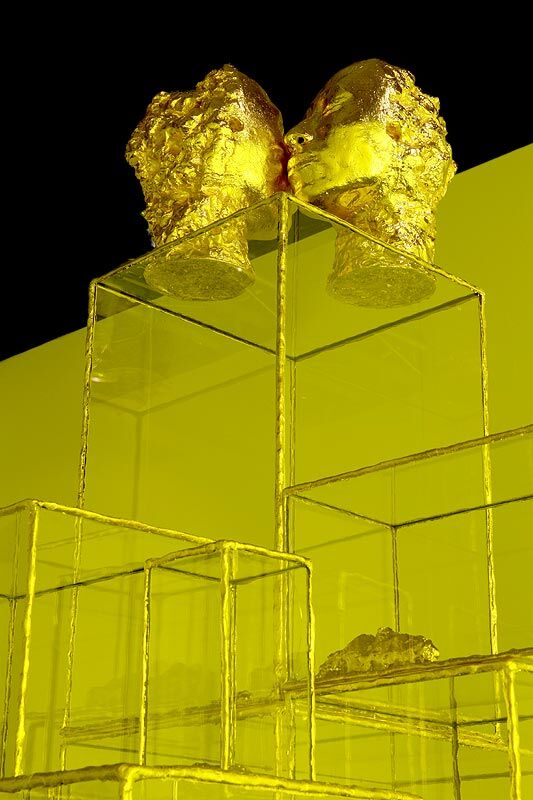 Terence Koh, Untitled, 2006. Courtesy of the artist and Morán Morán.

Pushing Manzoni’s 1960s concept to an extreme, Koh encrusted his own feces with gold in 2007 and called it Gold Plated Poop. At Art Basel, dealer Javier Peres (who also purchased New York Post covers on which Snow wiped his own semen) bought the work for $500,000. That November, Marc Spiegler (now director of Art Basel) penned a feature for New York Magazine entitled “Is Terence Koh’s Sperm Worth $100,000?: Portrait of the artist as a young punk capitalist.” Notably, 2007 was also the year Apple first released the iPhone. Narcissism was on the rise—in art and technology. 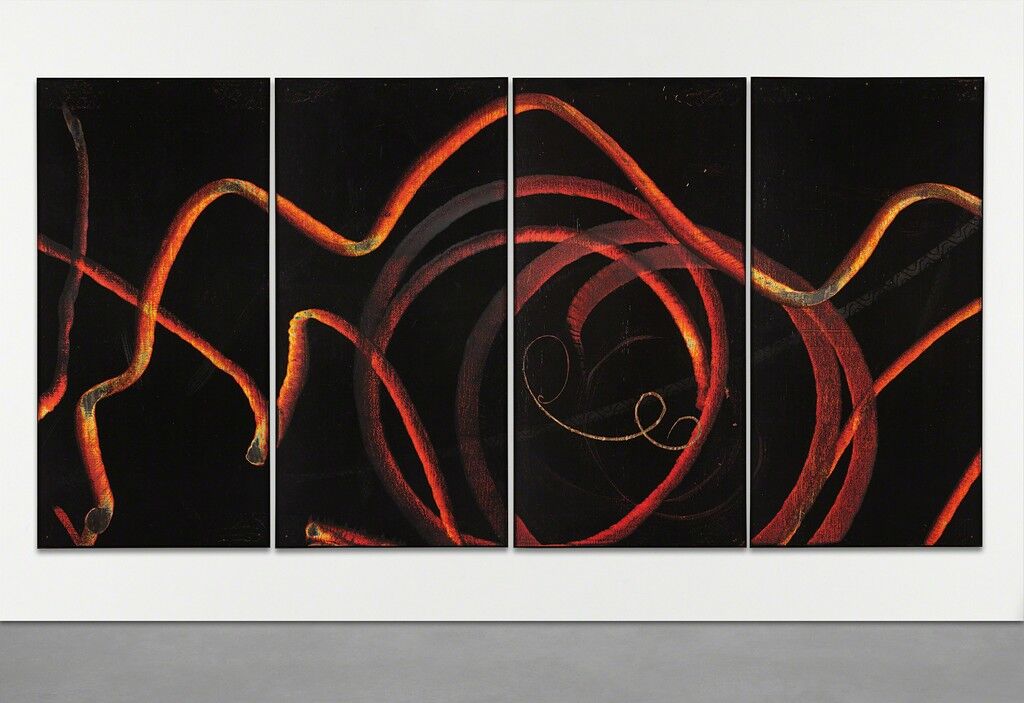 Aaron Young
Greeting Card, 2007
Phillips
In 2007, the year before the Great Recession, macho art reached its pinnacle. For his “Greeting Card” series, Young laid down plywood panels on the floor, coated first with yellow and red paint and then a sheen of black. Motorcyclists proceeded to ride on top, creating a loopy, snaking design. The making itself, staged in the Park Avenue Armory, became a spectacle. Exhaust clouds filled the room, giving the sense of a rock concert. Young rooted the performance and configuration in the work of another hypermasculine artist,
Jackson Pollock
: he titled the final product after a 1944 painting by the artist and showed the riders a picture of it to inspire them. “If there was any doubt that we live in a reasonable facsimile of the Gilded Age, it disappeared Monday night,” Roberta Smith wrote after the September opening. Twelve months later, the Dow Jones plummeted. The Gilded Age was over—for a while, at least. 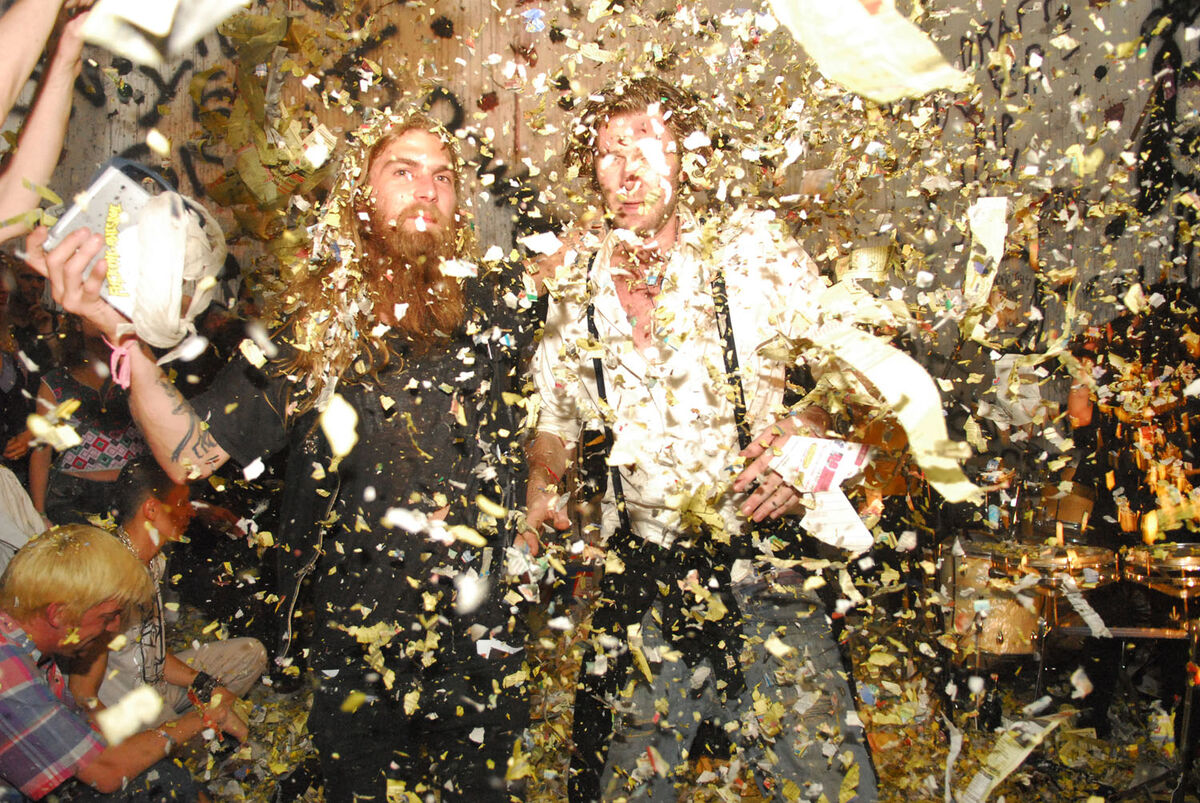 For years, the late Snow and his chum Dan Colen had a routine: they’d shred telephone books in hotel rooms, coating the ground with the paper, and take drugs until they felt like caged hamsters. In 2007, Jeffrey Deitch let the pair take over his gallery for a few nights in order to recreate their unique brand of mayhem. They called the debauched performance Nest and invited their friends, as well as a few kids who were banging on the door looking for a party. Soon enough, the impish crew had torn up over 2,000 New York City phone books and graffitied the walls with images (ejaculating penises, upside down crosses) and text (“gimme head till I’m dead,” “I may not go down in history but I’ll go down on yer lil sister”). Over at Artforum, David Velasco wrote, “trashing your hotel room—and then building a gallery show to commemorate the result—is also an expression of rather unusual privilege.”

Throughout the 1980s, Kippenberger painted himself in simultaneously aggrandizing and debasing self-portraits. He also ripped off other artists’ self-images; in a series of paintings, he depicted himself wearing just bloated boxers (à la
Pablo Picasso
in a famous
David Douglas Duncan
photograph). Throughout his life he garnered a reputation for heavy drinking and excessive partying. In addition to artmaking, he also managed a punk nightclub in Berlin in the 1970s. “It may sound hackneyed to say that Kippenberger’s life was an extended alcohol-fueled performance piece, but in a sense it was,” Roberta Smith once wrote, “at once self-indulgent, self-­destructive and, oddly, selfless, almost self-sacrificing.” 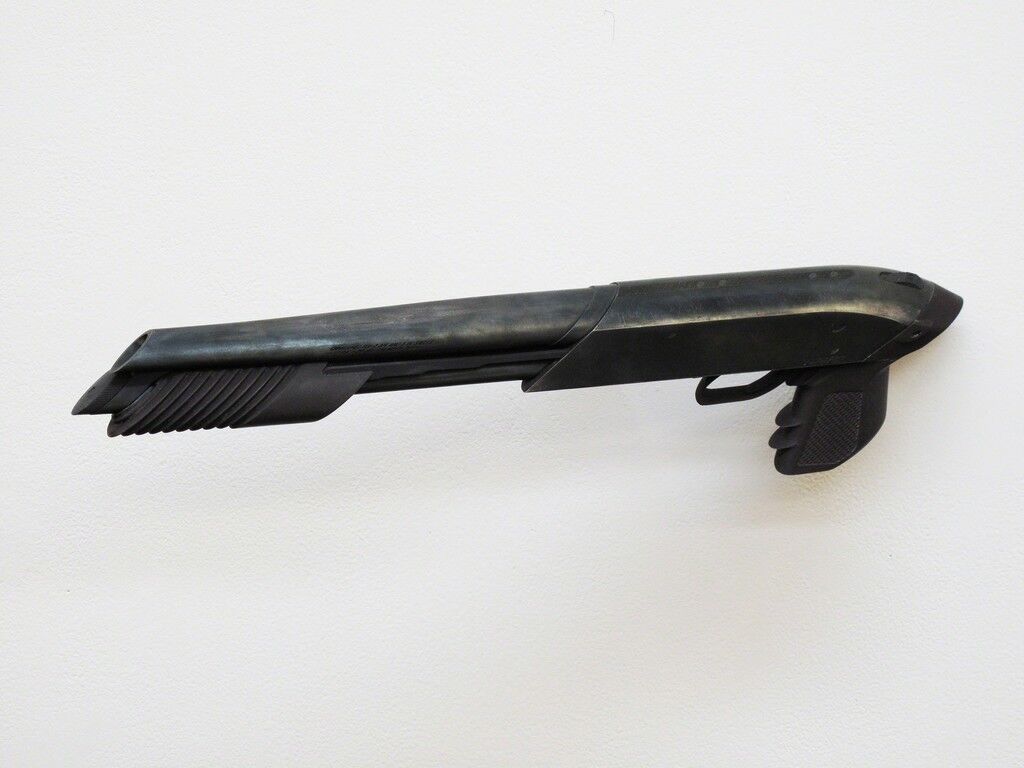 Robert Lazzarini
shotgun (sawed off), 2011
DITTRICH & SCHLECHTRIEM
Lazzarini might not make paintings out of motorcycles or engage in drug-fueled bacchanals, but he did celebrate the trappings of mythologized masculinity in his “Guns, Knives, Brass Knuckles” series. The artist fabricates sculptures of guns, knives, and brass knuckles of unusual proportions. Protruding from the gallery wall, they appear elongated or foreshortened, as though altered by some dimensional warp. His exhibitions can make gallery rooms look like the site of an impromptu weapon-throwing contest. 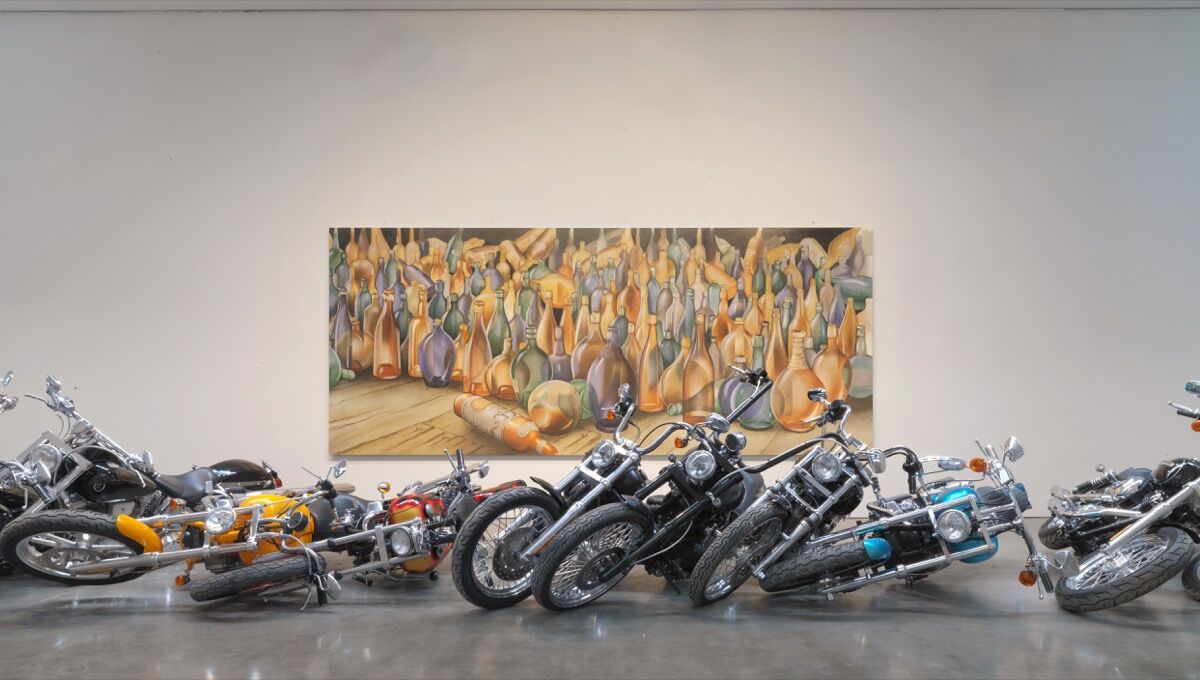 Colen mounted a much-maligned exhibition, entitled “Poetry,” at Gagosian Gallery in 2010. An enormous, upside down skateboard ramp sat in the middle of the gallery, a one-note nod to
Minimalism
and the readymade. A row of motorcycles toppled over each other. Paintings made from chewed bubble gum hung on the walls. In an article for New York Magazine entitled “2007 Art in 2010: The great regression,” Jerry Saltz wrote, “It’s frustrating that just when these sorts of gaudy gestures were going away, a show like this sucks all the air out of the room.” Artists, Colen seemed to posit, never really had to grow up.

Clifford Owens, Anthology (Kara Walker), from the series “Anthology,” 2011. Courtesy of the artist and INVISIBLE-EXPORTS.

For his “Anthology” exhibition at MoMA PS1 (2011-12) Owens asked other artists to create “scores” for him—sets of performative directions.
Kara Walker
wrote a particularly insidious script (originally intended for use by
Pope.L
, then requested by Owens): “Score: French kiss an audience member. Force them against a wall and demand Sex. The audience/viewer should be an adult. If they are willing to participate in the forced sex act abruptly turn the tables and you assume the role of victim. Accuse your attacker. Seek help from others, describe your ordeal. Repeat.” Owens did indeed kiss and grope audience members, though there was never any sex. Owens, of course, could have just turned down Walker’s proposal (which she later withdrew, asserting that it was a “Swiftian proposal” she’d never intended for Owens to actually enact). This work, perhaps more than any of the others discussed here, would be nearly impossible to produce today without risking total career destruction. 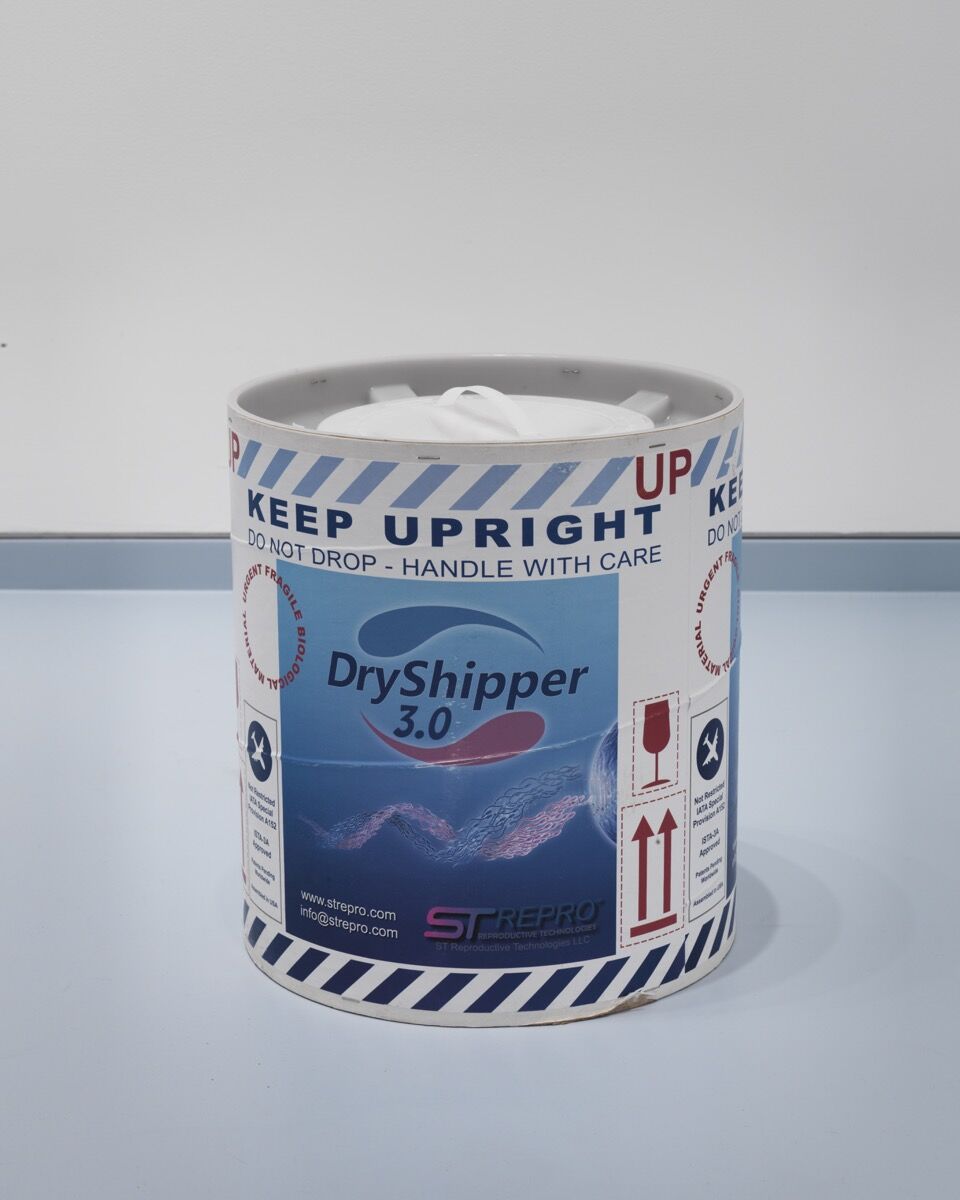 Andreas Slominski, Sperm of an Elephant, 2012. Courtesy of the artist and Metro Pictures. 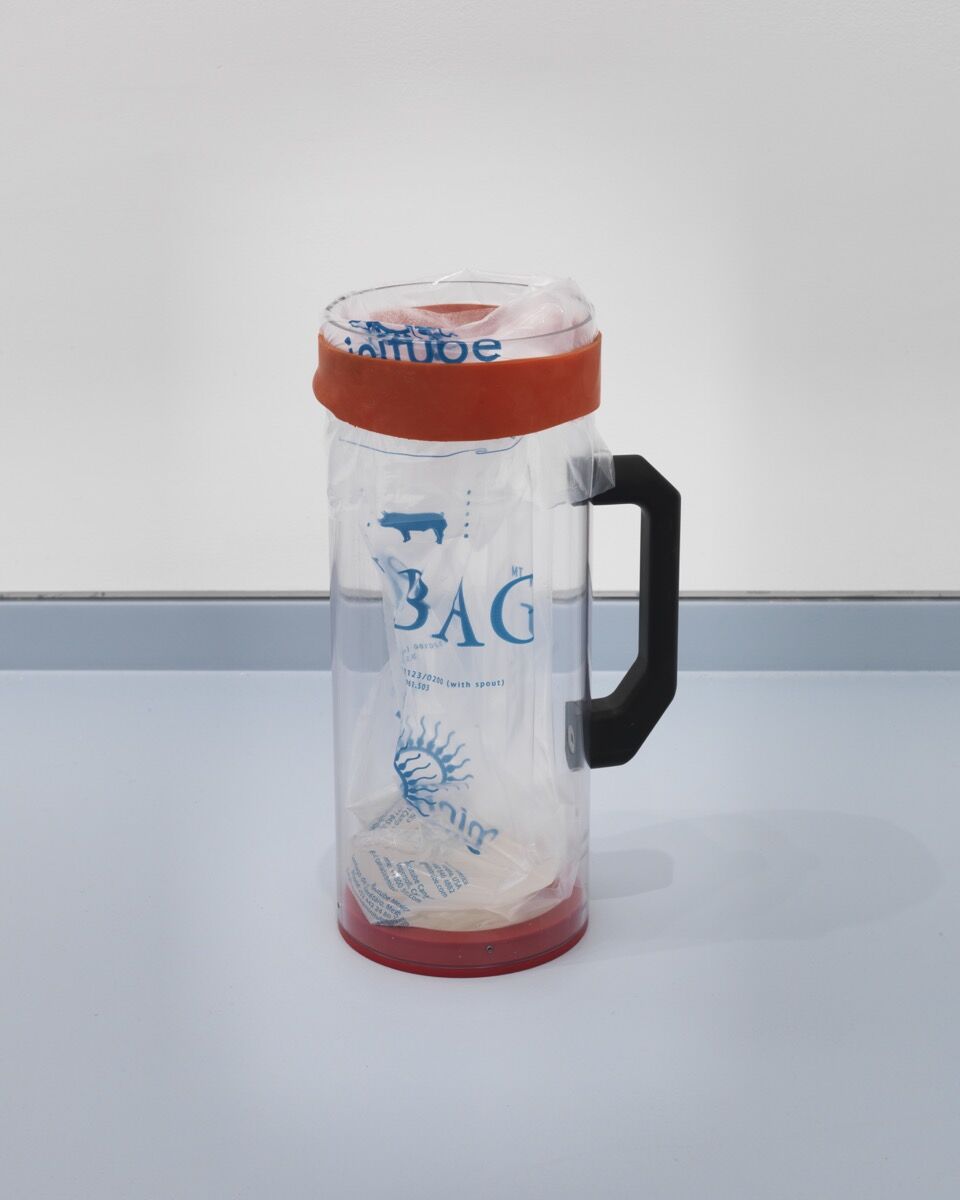 Andreas Slominski, Sperm of a Boar, 2012. Courtesy of the artist and Metro Pictures.

About 100 years after
Marcel Duchamp
“created” Fountain in 1917 by placing a urinal in a gallery, Slominski paid homage to the paterfamilias of conceptual (and bathroom) art. Mounted on the wall, jutting out toward the viewer, the porta potties transformed the white cube spaces of Metro Pictures into a surreal, unusable rest stop this past spring. This wasn’t Slominski’s first foray into art about bodily fluids. In 2012, he mounted an exhibition entitled “Sperm”for which he simply splashed the gallery walls with animal and human semen. Documentation from Ryder Ripps, Art Whore, 2014. Courtesy of the artist.

When the Ace Hotel awarded Ripps a one-night residency in 2014, he decided to call a couple of sensual bodywork professionals and have them make drawings for his project, which he called Art Whore. He found one male and one female masseuse via Craigslist and paid them $80 for around 45 minutes of artmaking. He filmed the entire action on webcam. The internet was not pleased. First of all, he’d used the term “sex worker” to describe the masseuses. Second of all, the whole project looked lazy. Ripps stressed that he was addressing ideas of exploitation—the hotel wasn’t paying him for the residency, and he was paying out-of-pocket for two strangers to create his art—but Twitter continued to rage. Ripps’s poorly spelled, likely sarcasticTwitter response, “as a strait white man.. I deserve all the ridicule..but as a jew i ask everyone take back what they said.. My people have been threw enough,” didn’t help his case. The criticism didn’t matter. 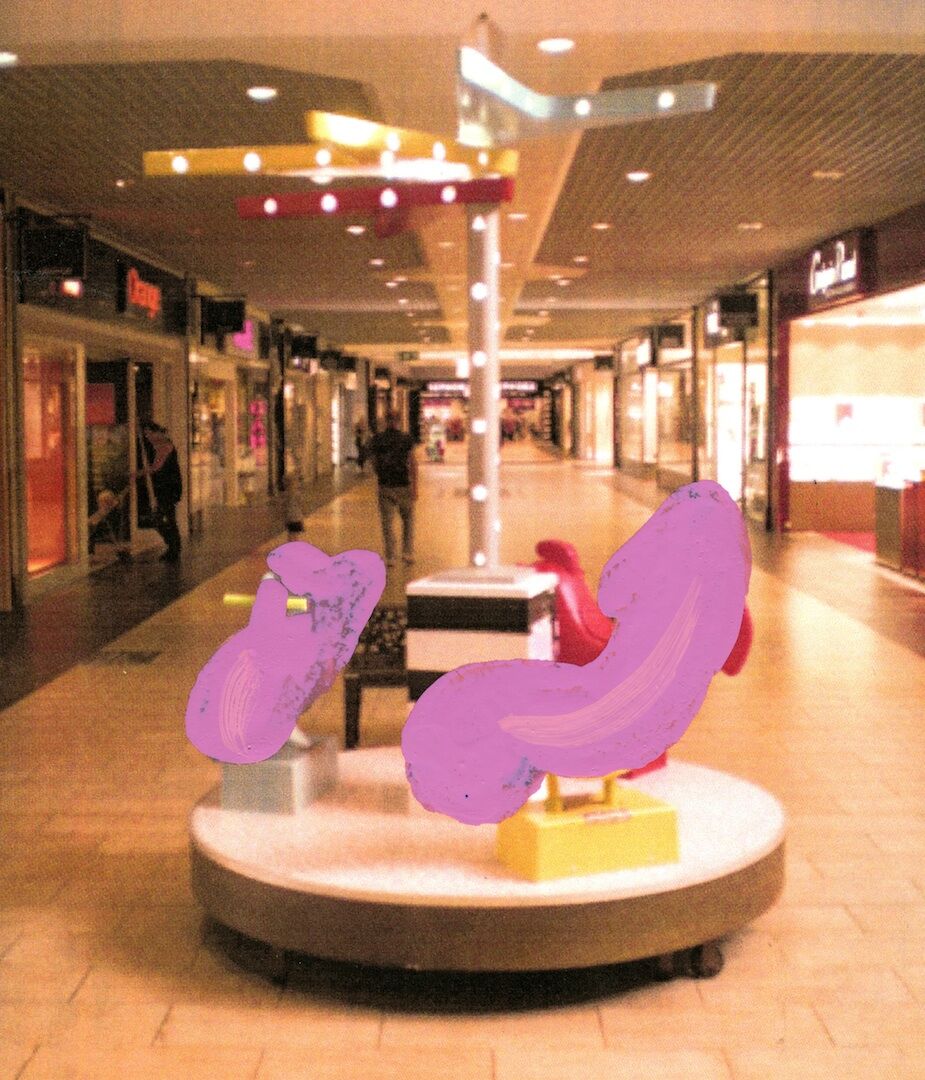 Saraiva owns two of New York’s sceneiest clubs—Le Baron and Le Bain—so it’s no surprise that his 2012 exhibition (named “Andrépolis,” after himself of course) at The Hole had a distinct nightclub aura. He created a series of small-scale replicas of buildings, replete with neon and nods to the art world. (The ground level of Deitch, 2012, resembled an Andy Warhol Brillo Box, labeled with the words “Deitch Projects” instead of “Brillo.”) In the back of the show, he presented a giant, plastic, pink penis, a sort of X-rated children’s ride; visitors could straddle the sculpture and take a spin. Press materials dubbed it “a carousel for adults, for those who are not afraid to ride the wings of desire… the way André does in Andrépolis.” The phallic motif continues throughout Saraiva’s properties: one of his Paris establishments, Castel, features penis-patterned carpeting. Le sigh.
Alina Cohen
Related Stories