The New York Subway in More Than 50 Years of Art 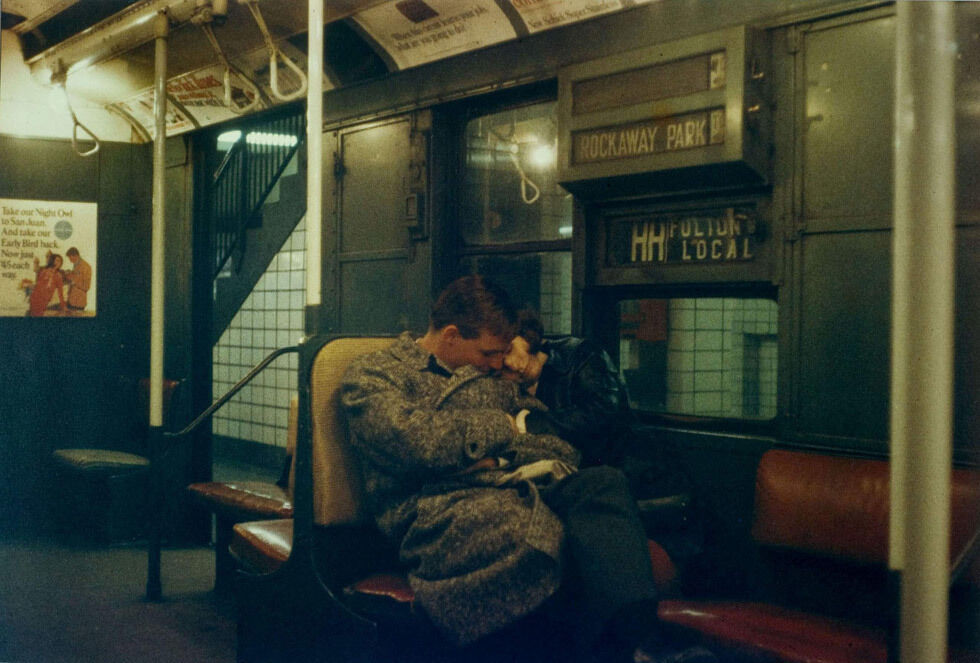 Armand Agresti
Subway, 1968
ClampArt
New York’s subway system first opened over a century ago, in 1904, and is now inseparable from the city in the public consciousness. Those who experience it—from locals commuting to work to out-of-towners making the pilgrimage to Times Square—are likely to encounter numerous characters along their routes. It’s a stage for endless human drama, but it’s also a character unto itself, with plenty of kinks and quirks. Throughout its history, the subway has inspired a wide range of artists, who have paid tribute to it in photographs that record couples wrapped around each other during the early hours of the subway’s nocturnal run, or paintings that evoke the profound alienation of urban life as symbolized by this transient, subterranean realm.
By 1934, when Lily Furedi painted Subway, riding the train had become commonplace regardless of race and class. Indeed, as
Thomas Hart Benton
’s monumental mural, America Today, shows, the subway of the late 1920s brought all kinds of New Yorkers into close proximity—from dancers and musicians to businessmen—due to the era’s rapid industrialization and the city’s ascendancy as a vibrant metropolis in the midst of the Jazz Age. The system became so busy that additional lines and stations were needed to ease congestion. Frustrated with the inefficiency of the independent Interborough Rapid Transit Company (IRT) and Brooklyn-Manhattan Transit Corporation (BMT), the city devised what would in 1932 open as the city-run Independent Subway System (IND). Unfortunately, corresponding plans for extensive expansion—including the storied Second Avenue line—were quickly halted by the Great Depression. 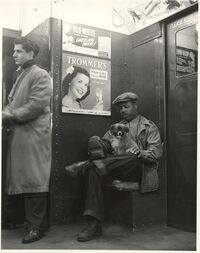 4 Images
View Slideshow
The subway had been running for close to four decades when it became the monopolized, city-run system we know today, with the city buying out the IRT and the BMT in 1940. Beginning just a few years prior, in 1938, pioneering documentary photographer
Walker Evans
seized on the subway as a space that was free of pretense, covertly documenting the unguarded behaviors, conversations, and reveries of everyday New Yorkers in transit. His intimate snapshots still resonate decades later.
As the end of WWII ushered in new wealth and resources in America, the 1950s witnessed the rise of big business, and with it, the inception of the New York City Transit Authority, responsible for all city-owned transit. While coin-operated turnstiles gave way to the token system (in turn supplanted by swipe cards in the late ’90s), consumerism mixed with Cold War fears. For artists like
George Tooker
, the subway became a symbol of the dread and social alienation felt by many. In his depiction, the confining, grid-like space seems to extend forever but lead nowhere, rendering its apprehensive subjects simultaneously disjointed from each other, yet jarringly homogenous.
In 1967, the IND was connected to the BMT for the first time. When the all-mighty Metropolitan Transportation Authority was born the following year, the MTA inherited an alphabet of train lines that included H, the IND’s shuttle. Also called HH (double letters denoted local lines), the train operated at all hours of the night from Ozone Park to Broad Channel and the Rockaway peninsula in Queens. Documenting day-to-day life in his borough, photographer and Queens local
Armand Agresti
captured a couple, in snoozing embrace, in a stationed vintage car on the HH line. The image is an ode to the bittersweetness of a late ride home in the city. 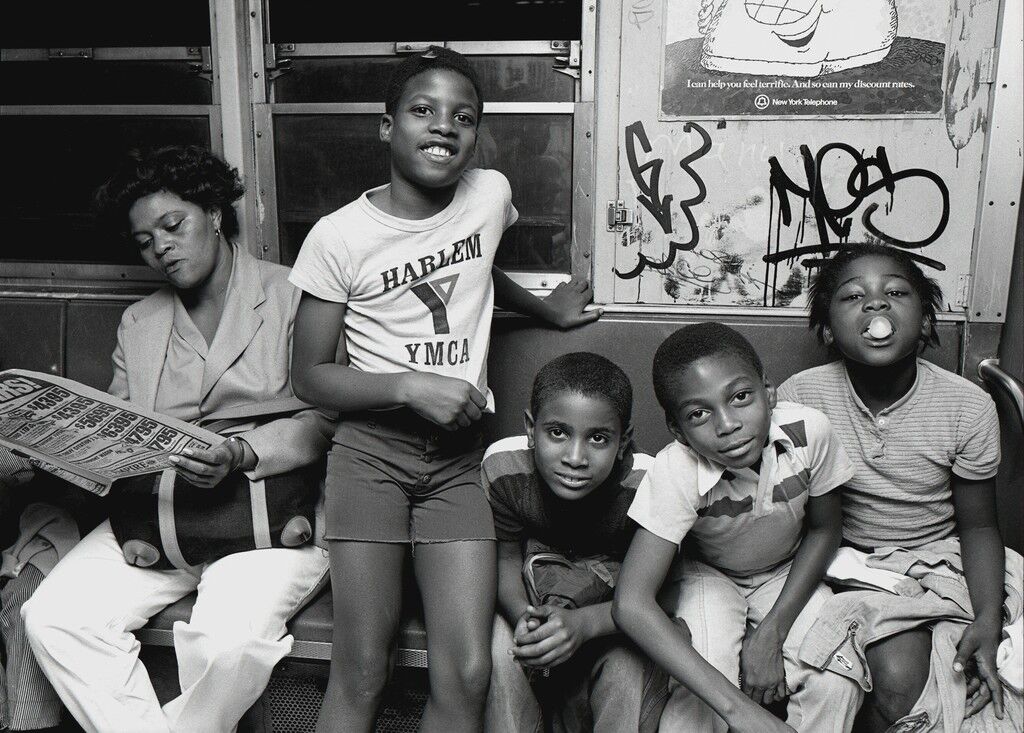 7 Images
View Slideshow
The graffiti-covered trains of the 1970s hold fast in the collective imagination, both for those who remember them personally and for those who have seen them only in films and photos. For young people on the margins, graffiti was both a creative outlet and a defiant act during an era of political corruption and urban decline. For
Bill Cunningham
, who captured the city through its fashions, the graffitied subway was a quintessential New York setting, on exuberant display in his 1968–76 staged photo series featuring portrait photographer Editta Sherman in ostentatious, anachronistic garb.
While crime and derelict conditions plagued the subway system in the early ’80s, significant improvements were made by the decade’s end, thanks to mayor Ed Koch and NYC Transit Authority president David Gunn. Yet photographers have found beauty in the subway even at its worst.
Bruce Davidson
’s shadowy images of the outside of a packed train car, or a young woman waiting on a subway platform, are poetic meditations on human transit.
Meanwhile, a not-yet-famous
Keith Haring
filled empty underground ad spaces with temporary chalk drawings. Photographer
Tseng Kwong Chi
documented Haring and these drawings in thousands of photographs. In one, the artist sits defiantly splayed on a bench at the Fifth Avenue/53rd Street station, tying the subway to the then-burgeoning, counter-cultural downtown art scene of which Haring was a part. By the early ’90s, the subway exuded less of the moody grit characterized by the previous decade. Instead, it played the backdrop to a stylish tourist couple in the Big Apple, in
Stephanie Pfriender Stylander
’s editorial for Italian Harper’s Bazaar, featuring an 18-year-old Kate Moss. 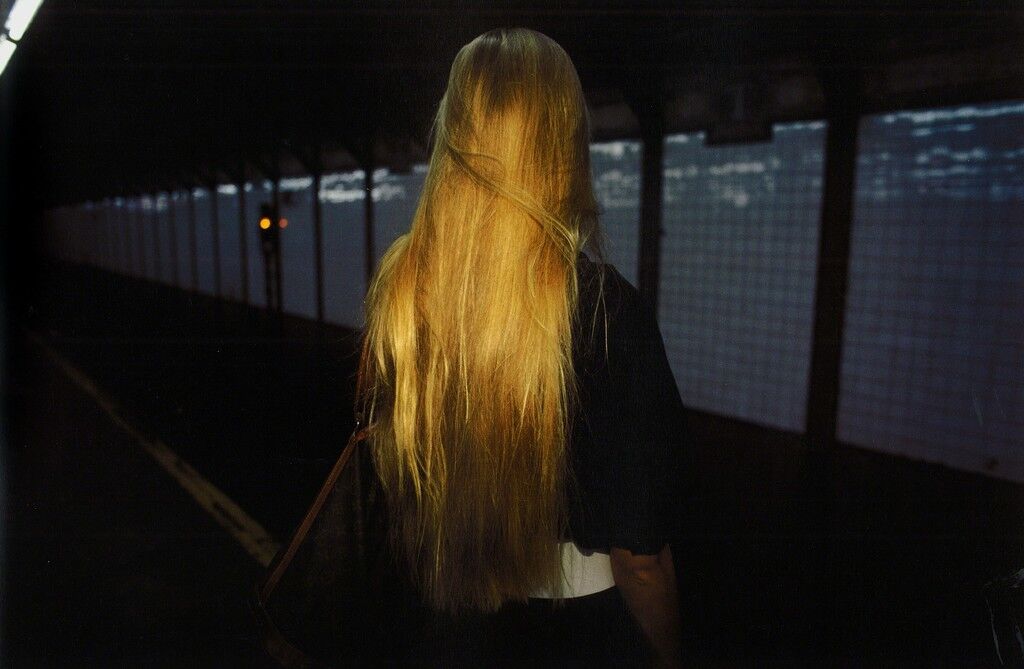 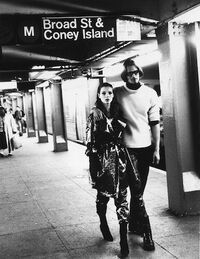 6 Images
View Slideshow
As the 20th century came to a close, the birth of unlimited-ride cards and self-service MetroCard vending machines brought the subway further in step with its current incarnation. Despite its many changes over the years, as
Nan Goldin
’s psychologically penetrating snapshot of her nephew Simon shows, the NYC subway continues to be a powerful locus for individual experience, as well as the city’s underground engine, ferrying people from one side of the metropolis to the other.
Rachel Lebowitz
Related Stories