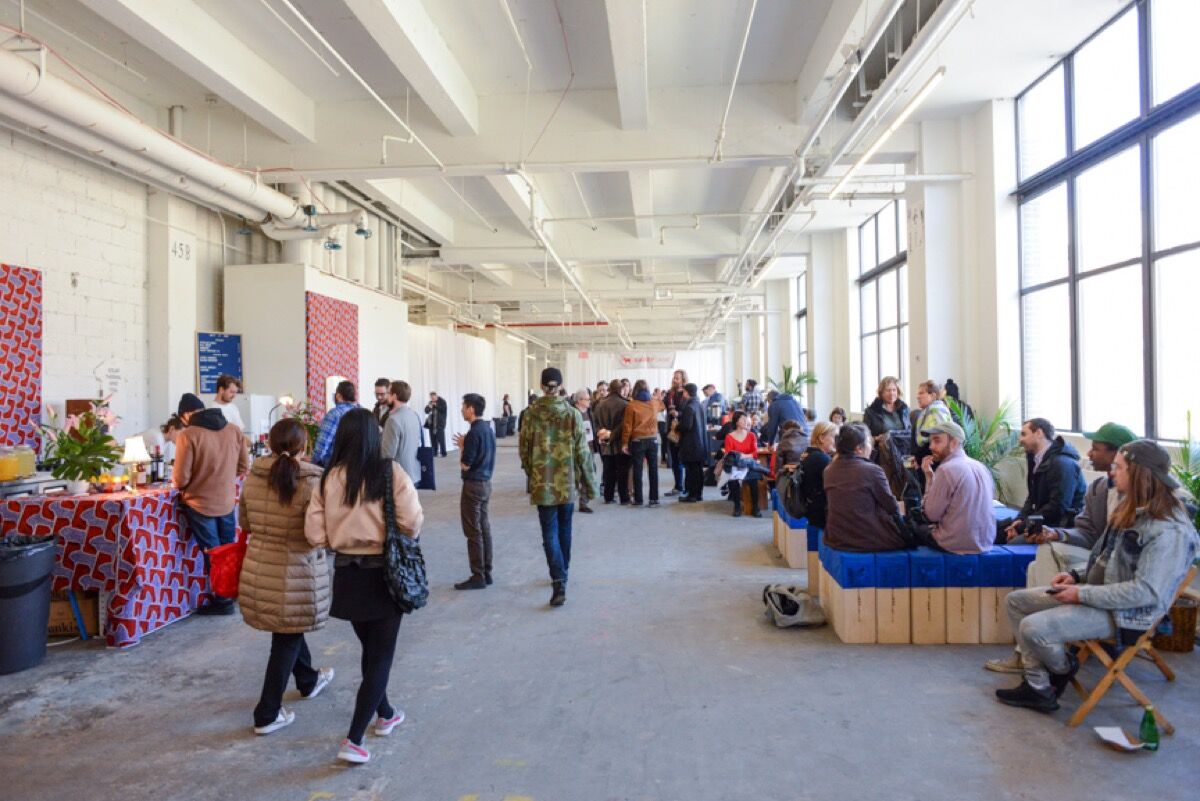 NADA New York opened its sixth edition on Thursday. This year, the fair breaks tradition with its former May date, coinciding with Frieze New York, to run in tandem with The Armory Show instead. This edition also sees the fair swap its former Lower East Side digs, Basketball City, for SoHo’s more central Skylight Clarkson North.
At noon sharp, an art-world crowd eagerly crammed into the industrial elevators of the new venue, anxious to get a first look. The fair, known for emerging programs and strong mid-sized galleries, presented over 100 exhibitors from 37 cities worldwide. Perhaps in response to the uncertain state of the emerging art market, these galleries primarily focused on new and prime works by their most sought-after artists, in lieu of the never-before-seen artists that fair has been known for in the past. Below, we share 15 standout works from this year’s fair. 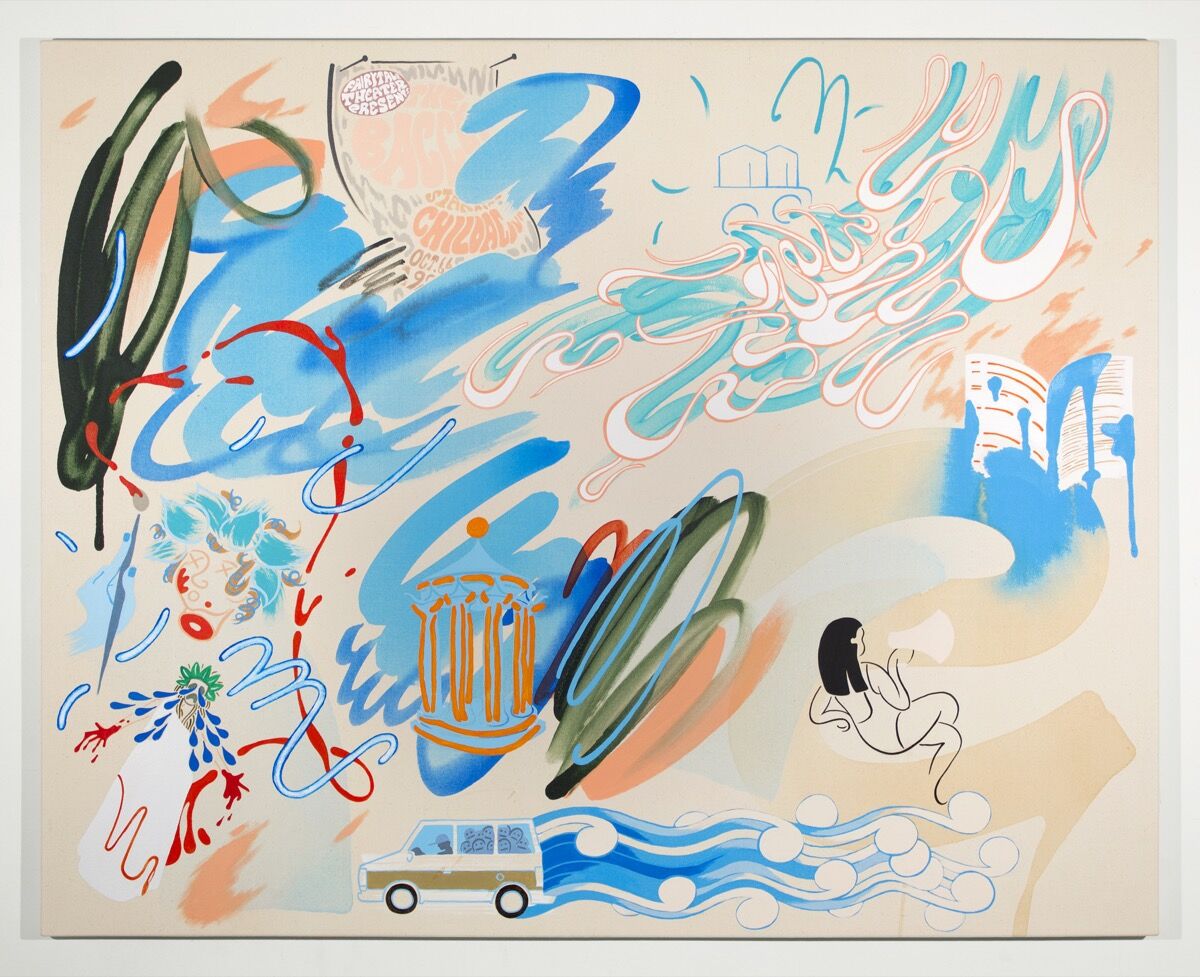 Inspired by a lake Granados visited during childhood, this work draws imagery from the artist’s personal experience as well as the theater—like the masks, motifs, and props of Greek tragedies. To make his work, the Northern California-raised, New York-based painter combines a number of drawings onto a single canvas, intermingling scenes of people, nature, and theater among vibrant, sweeping brushstrokes. Like this piece on offer at NADA, Lake Francis (2017; $5,500), all of his works are inspired by personal experiences.

On view at NADA New York: 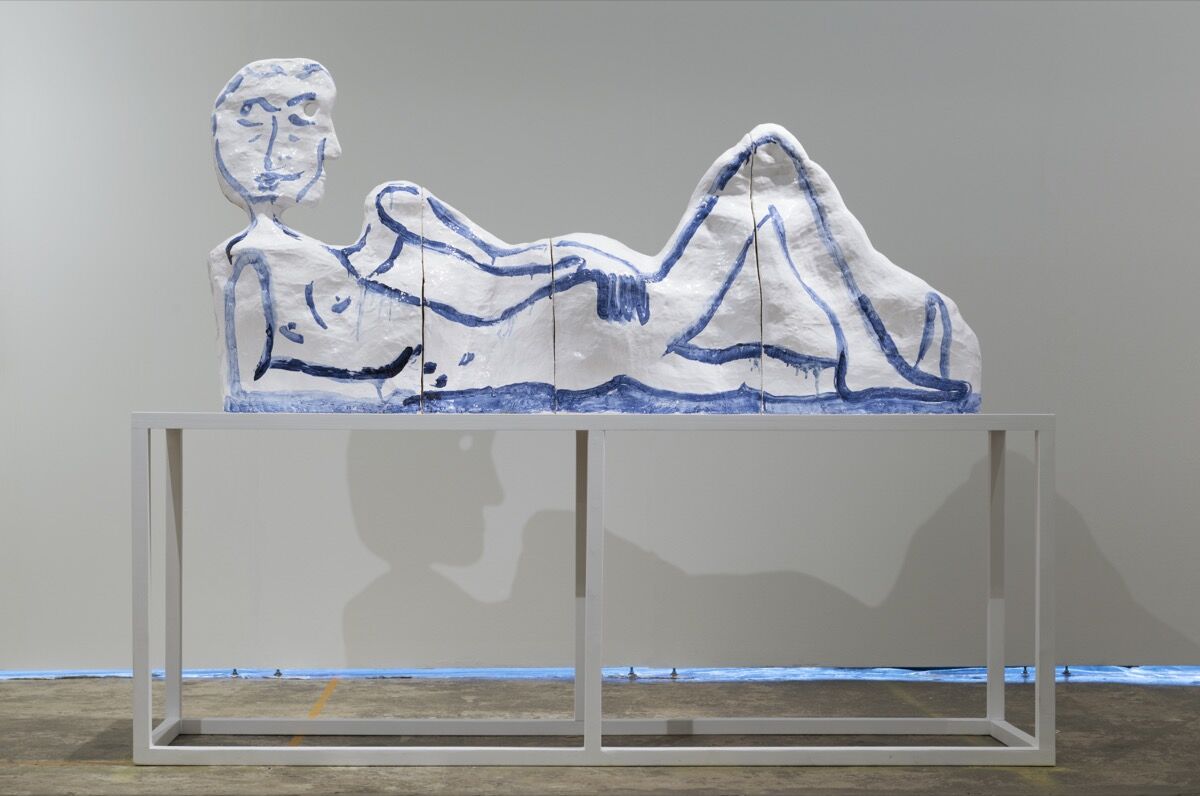 Advertisement
This large-scale sculpture by the sought-after British ceramic artist depicts a lounging nude figure, made from four separate pieces. The work, priced at $15,000, was created in
Wine
’s whimsical style, and finished in the traditional white-and-blue ceramic palette. One side of the figure is male, while on the other it’s female—a delightful contemporary take on the classical reclining nude found throughout European art history.

On view at NADA New York: 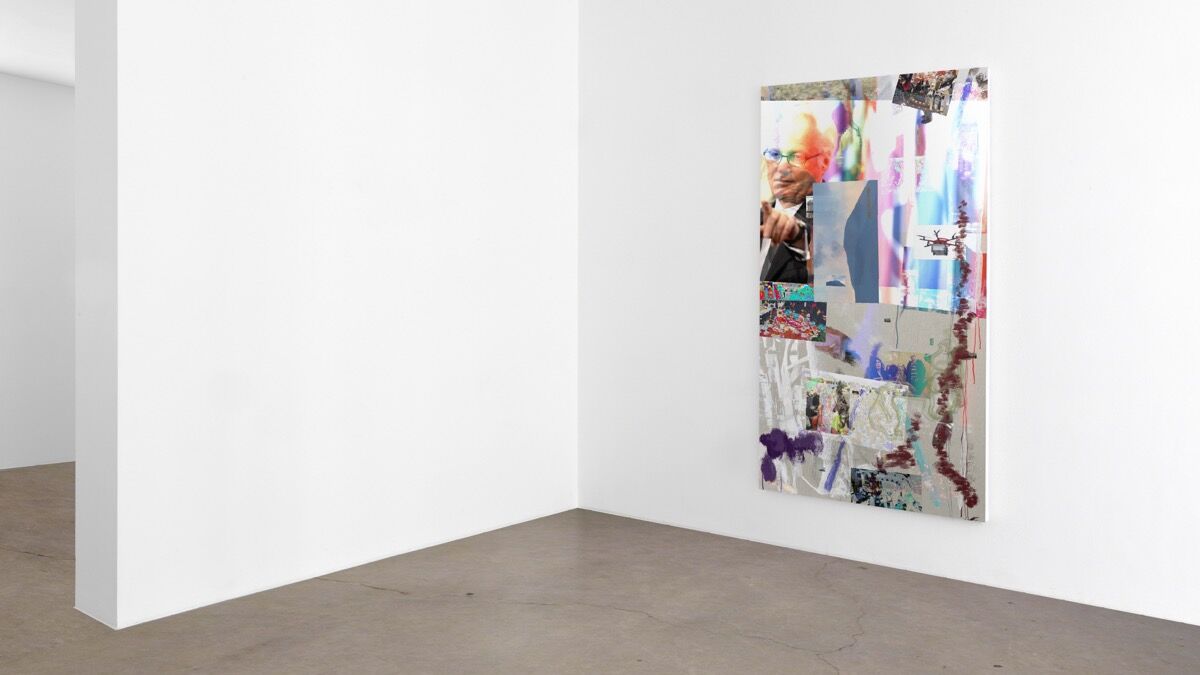 This new two-screen, internet-connected installation responds to the current dialogue around fake news.
Versteeg
, who is primarily a digital painter, wrote an algorithm to cull images from CNN and collage them with digital brushstrokes to create a new painting every minute, which appears on one screen. On the second screen, that same artwork is featured in a rendered gallery space in situ, which also changes every minute. The installation addresses not only the dissemination of fake news, but also the breakneck pace that some artists keep to make and display their work. It is priced at $65,000, and three editions of each individual screen are also on offer for $35,000 apiece.

Aidas Bareikis, Too Much Seaweed, 2016 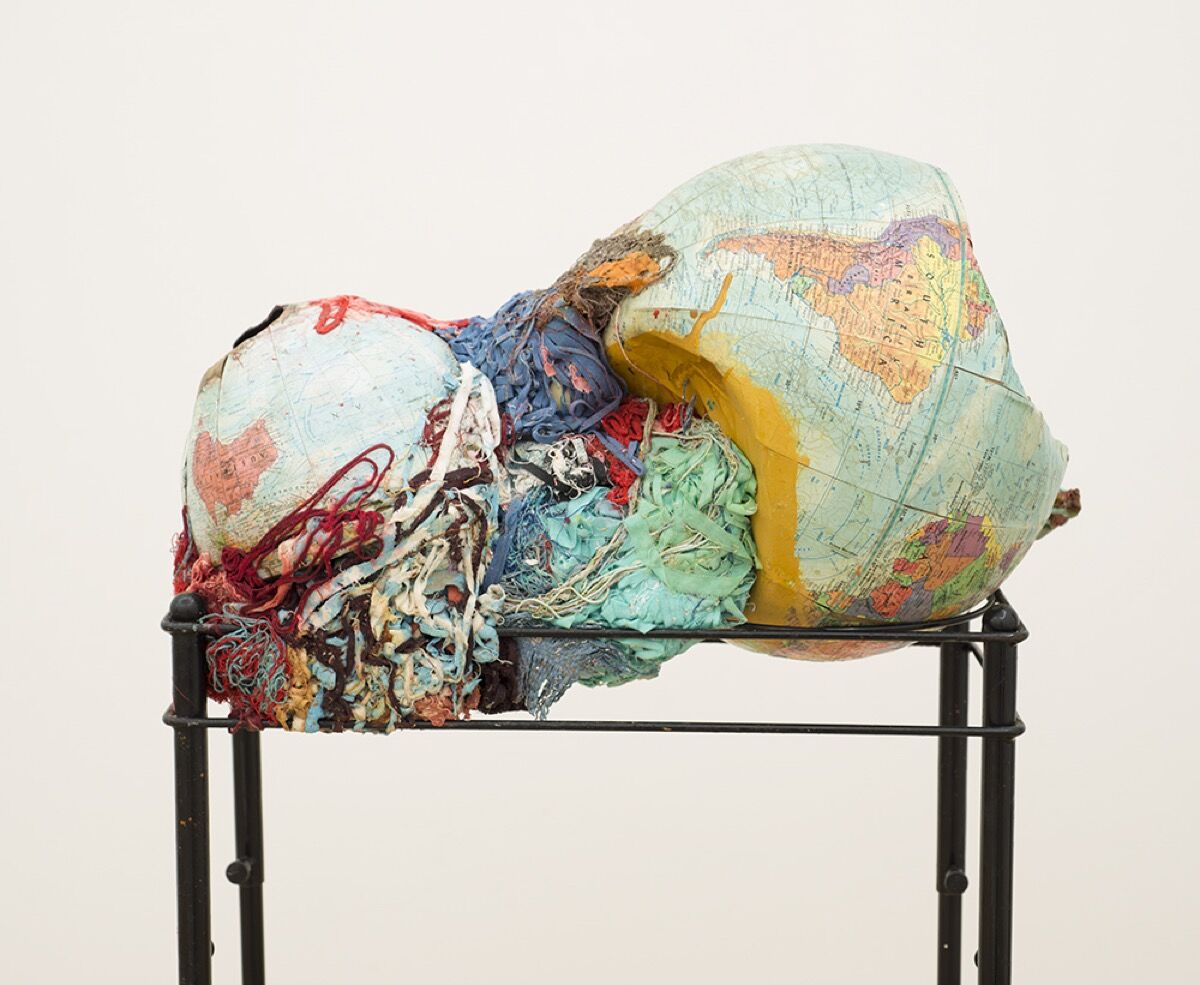 Aidas Bareikis, Too Much Seaweed, 2016. Image courtesy of CANADA.

Bareikis
’s work is a timely comment on international relations and politics, depicting worlds that appear to be imploding, though they’re being held together by thread. This work, priced at $11,000, sees two globes and scraps of fabric perched atop a flower pot stand. In his former life, the Lithuanian artist fought in the Soviet Army in Afghanistan; he sickened himself in order to be discharged, and went on to pursue art, earning a Fulbright and an MFA from Hunter College. He’s now based in Gowanus, where he primarily creates his works from found objects. 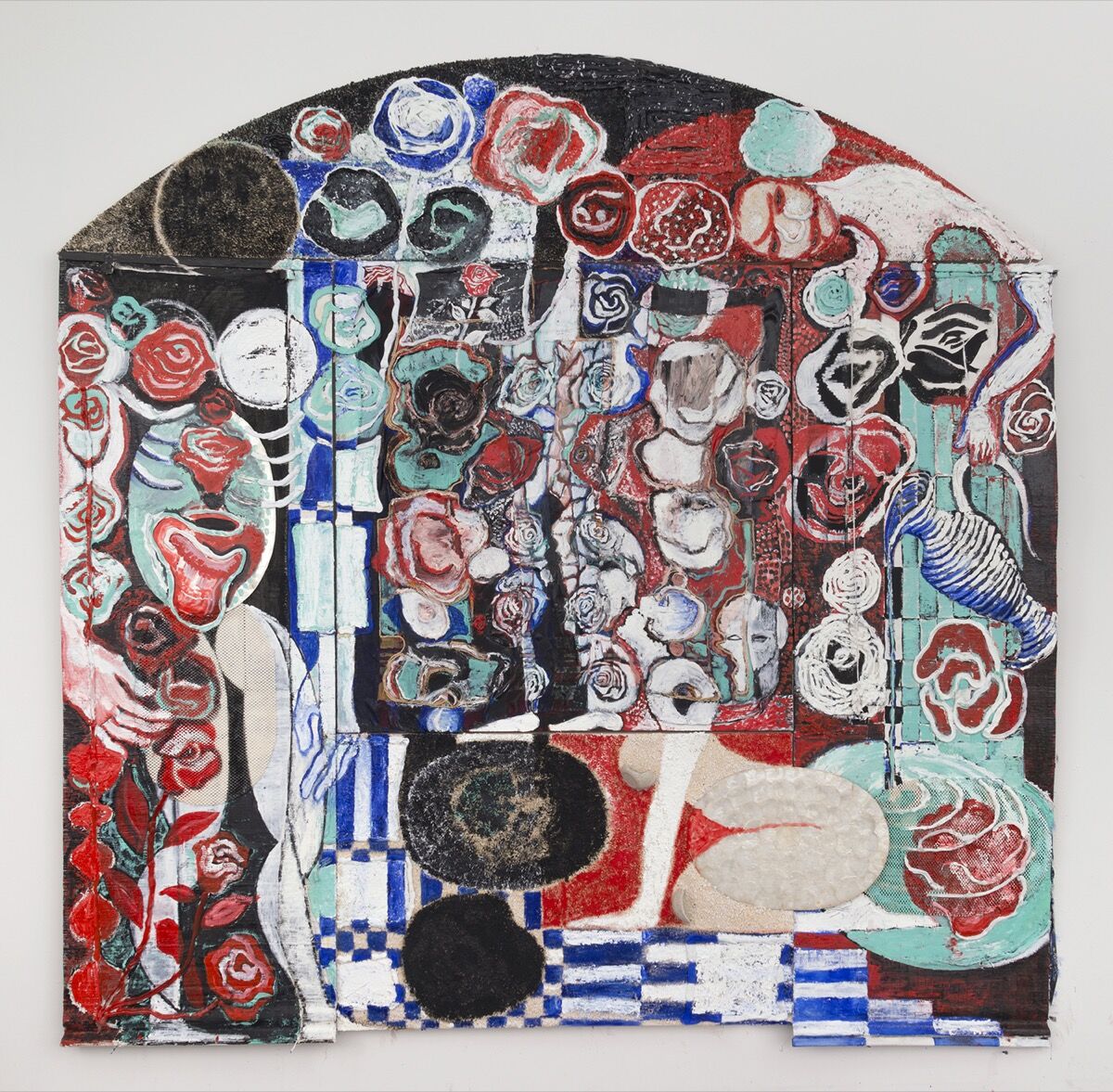 Often centering her paintings around a single object, Rosen began this five-part painting with a floral scarf that belonged to her grandmother. The work is created in the palette Rosen has taken inspiration from since her grandmother, a craft painter, left her a set of paints when she died. The swirling, figurative scene is made up of paint, caulking, and canvas, though also skillfully incorporates clay, twine, and a variety of unexpected objects and materials—two bamboo shades, a placemat, and a broken ceramic cup among them. 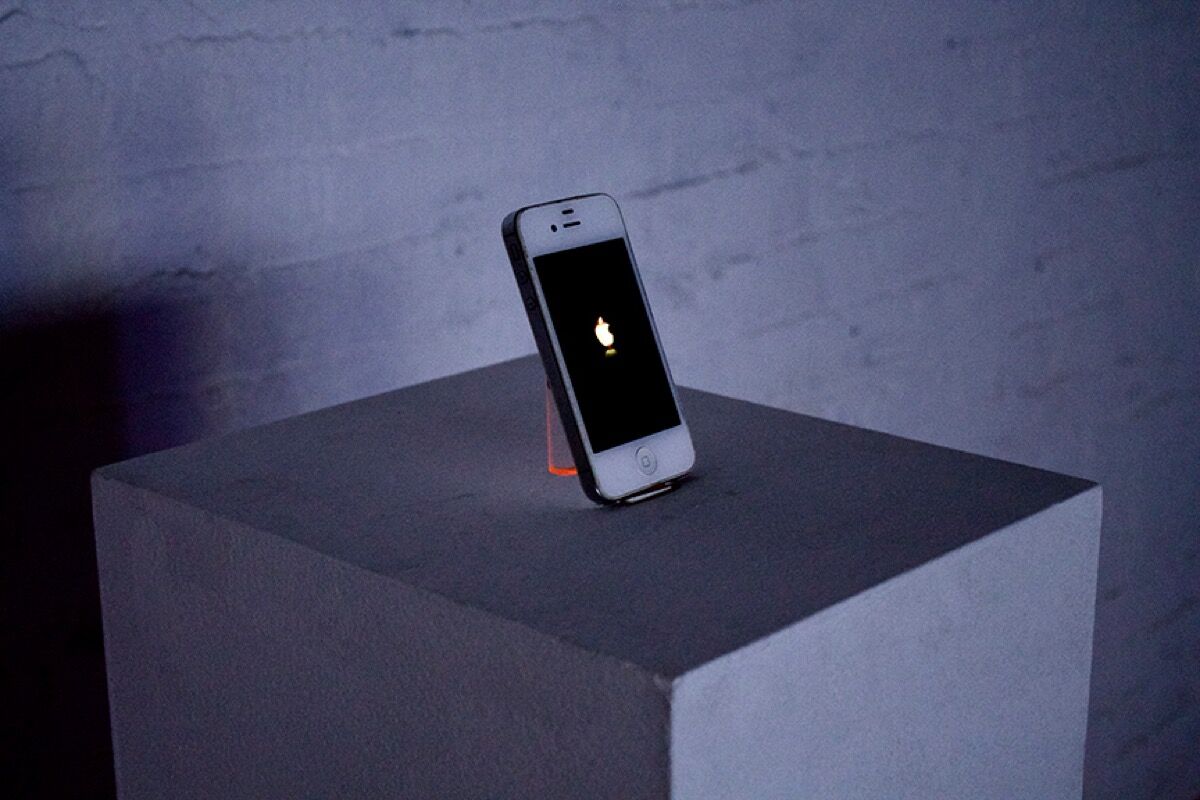 What appears to be an iPhone charging in the corner of a booth is actually an artwork by
Bennani
, the Rabat-born, New York-based artist who had her first solo museum show at MoMA PS1 last summer. Look closely and you’ll see that the phone is streaming a video: A black screen features a luminous Apple logo modified with a butt crack, which dances to the Iraqi folk song Ya Binaya Goumi (Oh Girl, Stand Up) by Bawin, on a 30-second loop. “She tweaks very contemporary ideas, looking at them through a Muslim or Moroccan lens,” says SIGNAL co-founder Kyle Clairmont-Jacques. 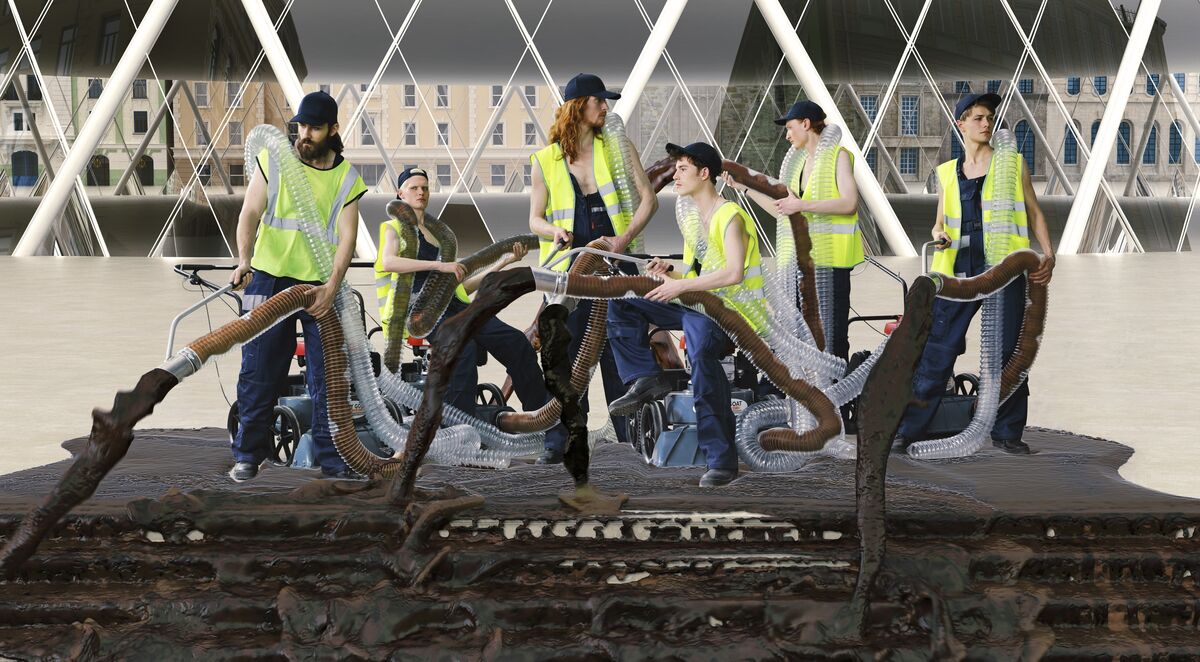 Four-person Russian artist collective
AES+F
is known for large-scale video works that delve into global issues and conflict. This stunning video installation sends the viewer into an apocalyptic underworld where children box with senior citizens, and stylish sanitation workers flood the streets with waste. Inspired by 16th-century medieval engravings, it’s an alarming though transfixing vision of dystopia, all the more powerful given the current state of political unrest. The HD single-channel video is accompanied by stills that are priced at $2,500–$5,000. 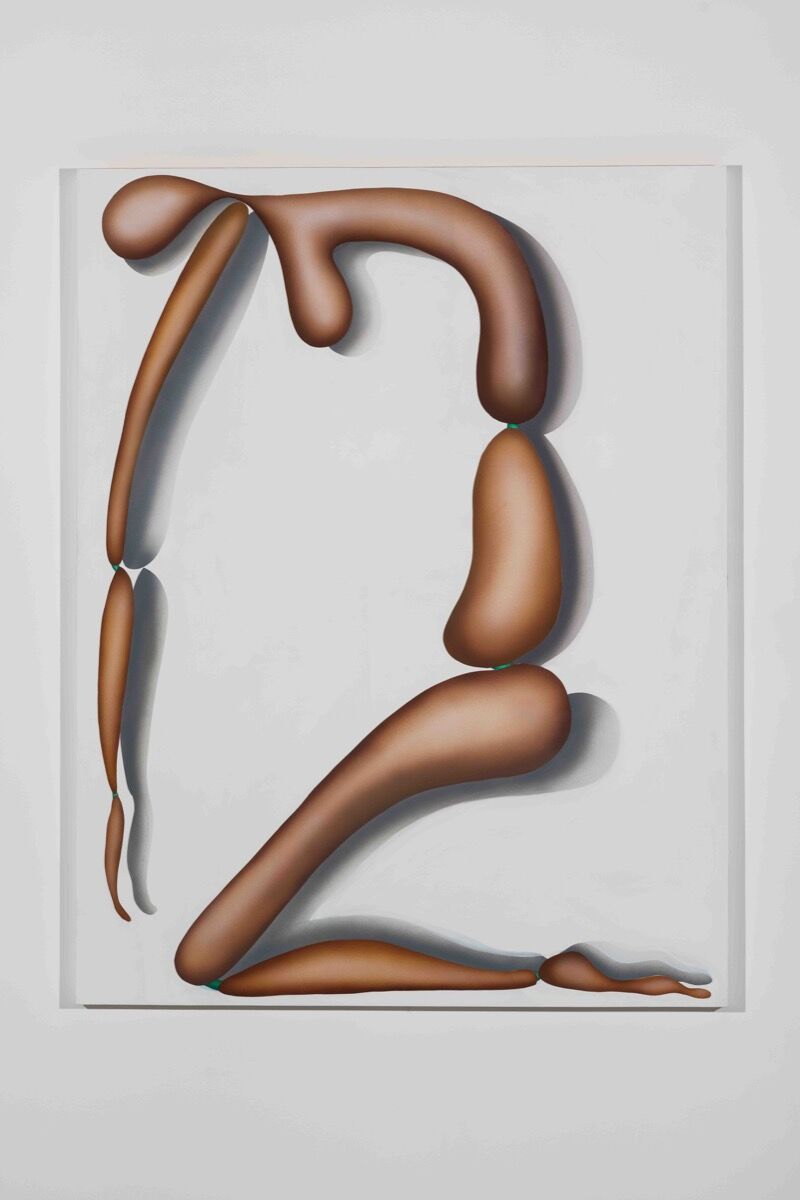 This new work by Montreal-based artist Paradis makes evident his interests in modern painting and graphic design. The sleek, minimal painting (priced at $5,000) has hints of
Picasso
in its treatment of the figure, and the Surrealist works of
Dalí
and
Tanguy
in its texture. Paradis leads the viewer to focus on the figure’s form, placing emphasis on its elongated body parts, rather than its identity. 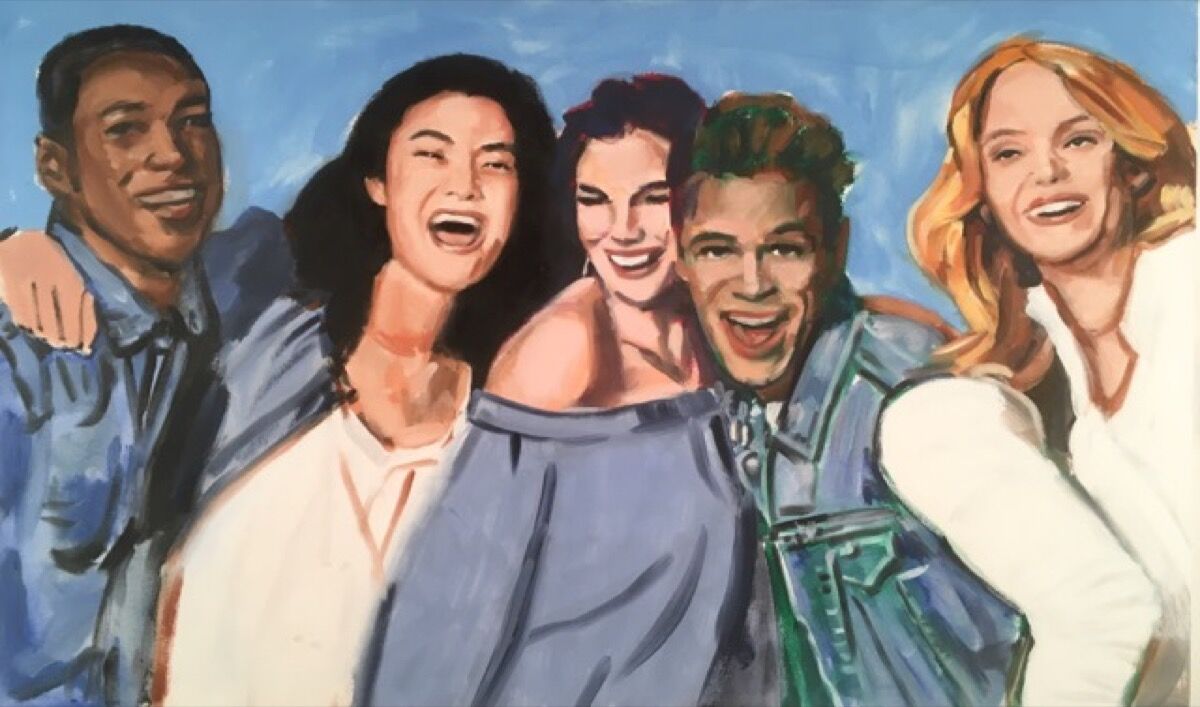 Walter Robinson, Polyamory (Macy’s Levi’s and More for Him and Her), 2017. Image courtesy of Galerie Bertrand.

Finished just weeks ago, this acrylic painting is part of the artist’s “Normcore” series, inspired by the unisex fashion trend popularized in 2014 that saw hipsters wearing brands not normally associated with style, like L.L. Bean or Nike. For the series,
Robinson
mines source imagery of models in such clothing from catalogues and newspaper inserts. This particular work (priced at $23,000) draws from a Macy’s ad, and plays up the staged expressions and posture of the related models in thick brushstrokes. With its title, Polyamory, it also eroticizes the jubilant fivesome. 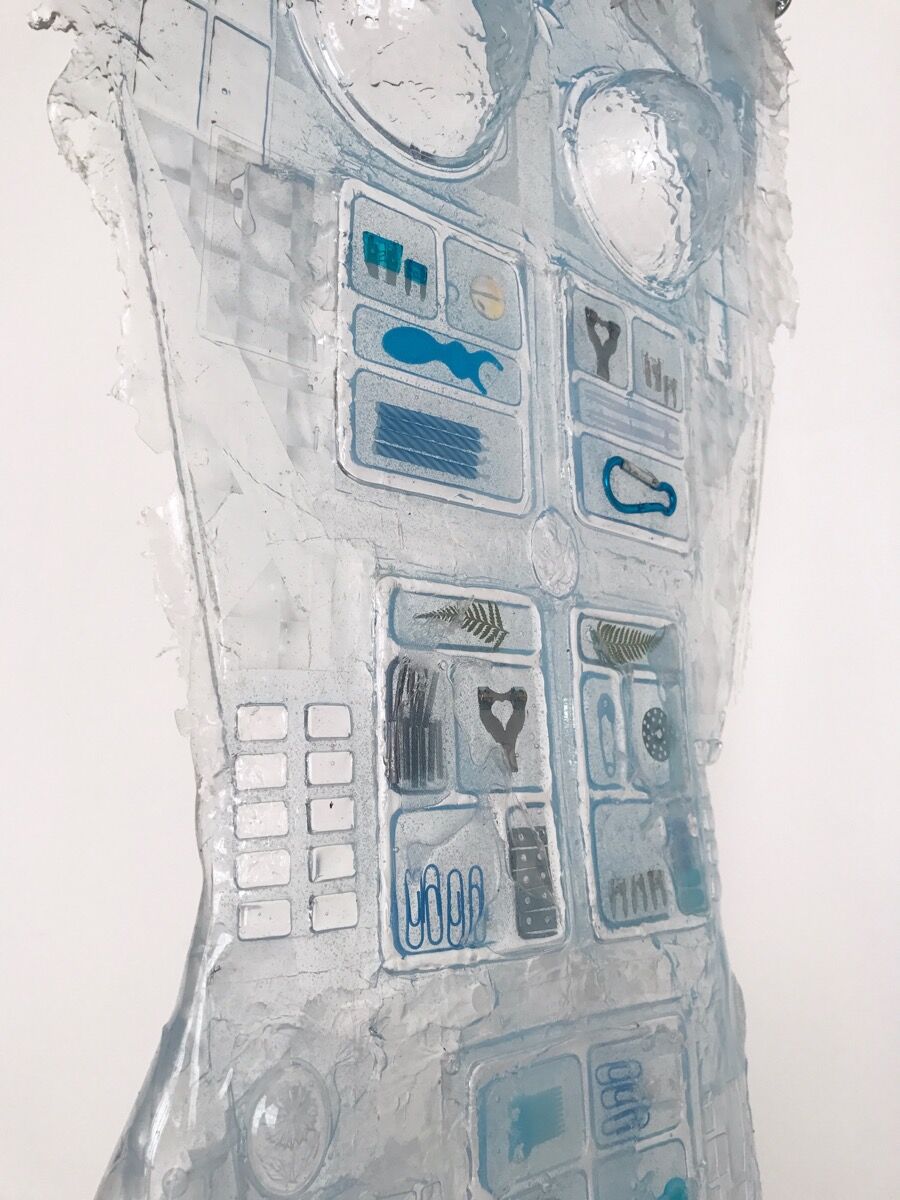 Brener
addresses the obsolescence of everyday objects with these elegant, otherworldly silicone sculptures. This work, priced at $5,000, bears the impressions of discarded tools and technology, like keyboards and flanges, and contains a taxonomy of small found objects and dollar-store purchases in shades of blue (birthday candles, qtips, and rubber bands among them). Somewhat autobiographical, the dress-like form also incorporates the impression of the face of the artist’s father (Roland Brener, who was also an artist), which she cast shortly after he passed away and has been using in her work ever since. 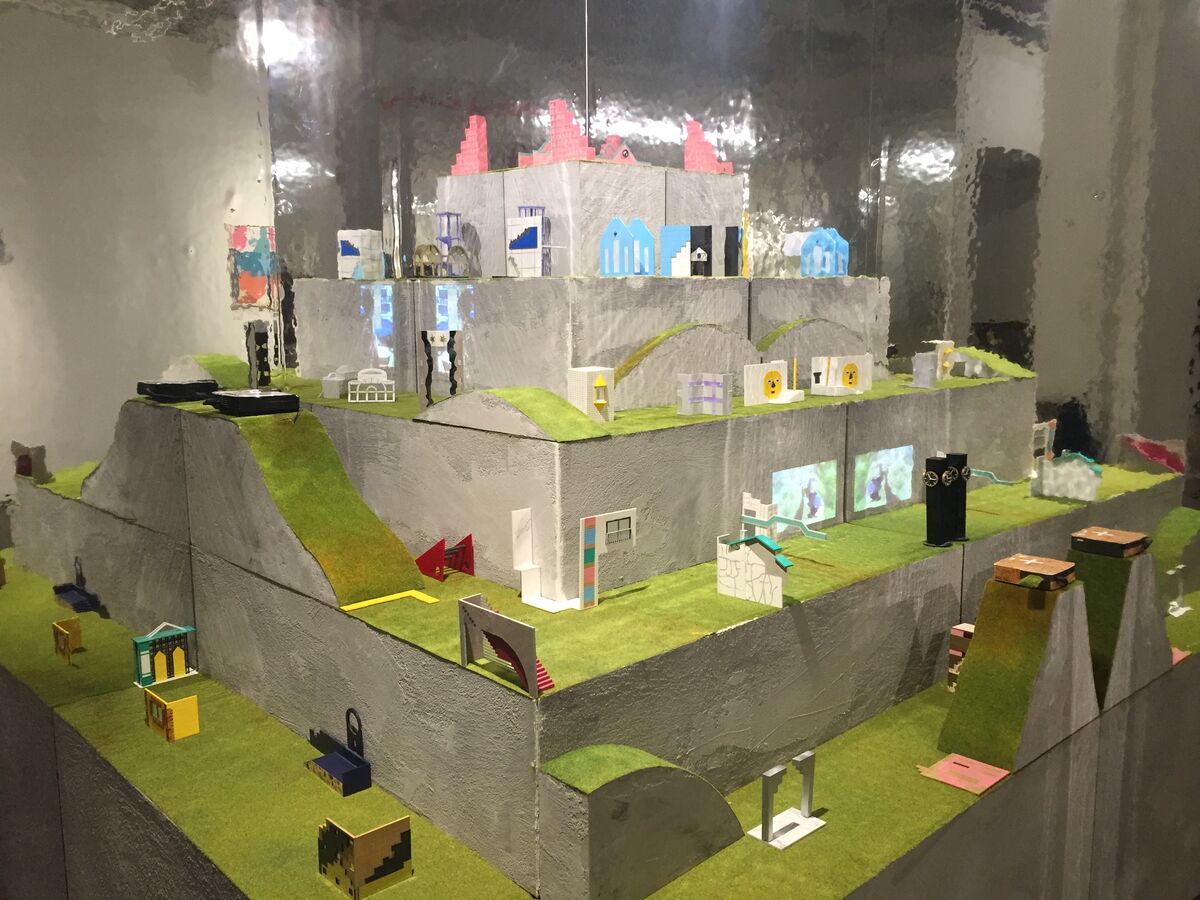 This site-specific installation by young Budapest-based artist Schmied depicts an imagined city, “Noguchi Town,” which is comprised of tiny replicas of
Isamu Noguchi
’s art and architecture found in Japan. A surrealist, miniature landscape of concrete and fake grass, the work also includes two small projectors that stream videos capturing absurd moments of daily life the artist shot in Japan, as well as similarly bizarre photographs, like one that catches a deer walking through a public restroom. The installation is priced at $14,000, and photographs can be purchased individually for $1,400. 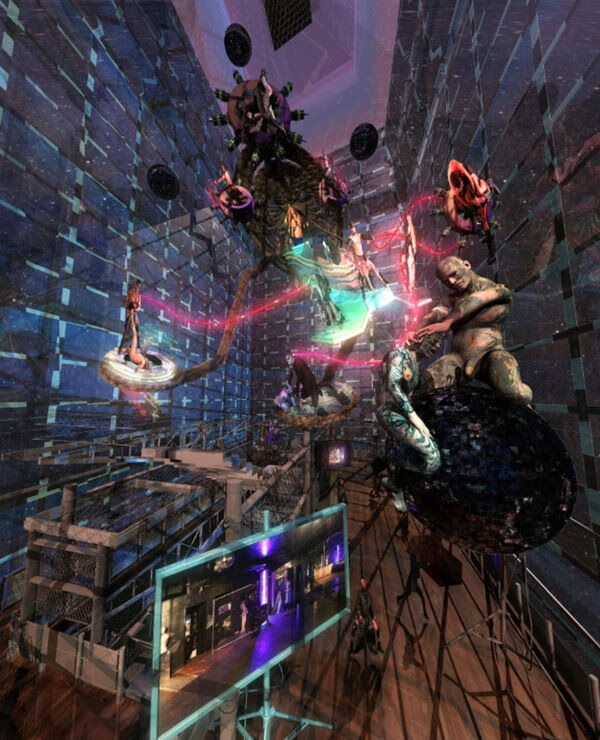 Jacolby Satterwhite, Domestika, 2017. Courtesy of the artist and Moran Bondaroff.

This virtual reality work, which viewers can watch in an Oculus Rift headset, is a precursor to
Satterwhite
’s forthcoming VR and 3D-animated visual album, which will be released soon. The work (part of a booth presentation the artist describes as “a map of [his] catharsis”), carries the viewer through a star-filled, pink and purple cosmos with gyrating dancers, set to tracks from electronic band Patricia. 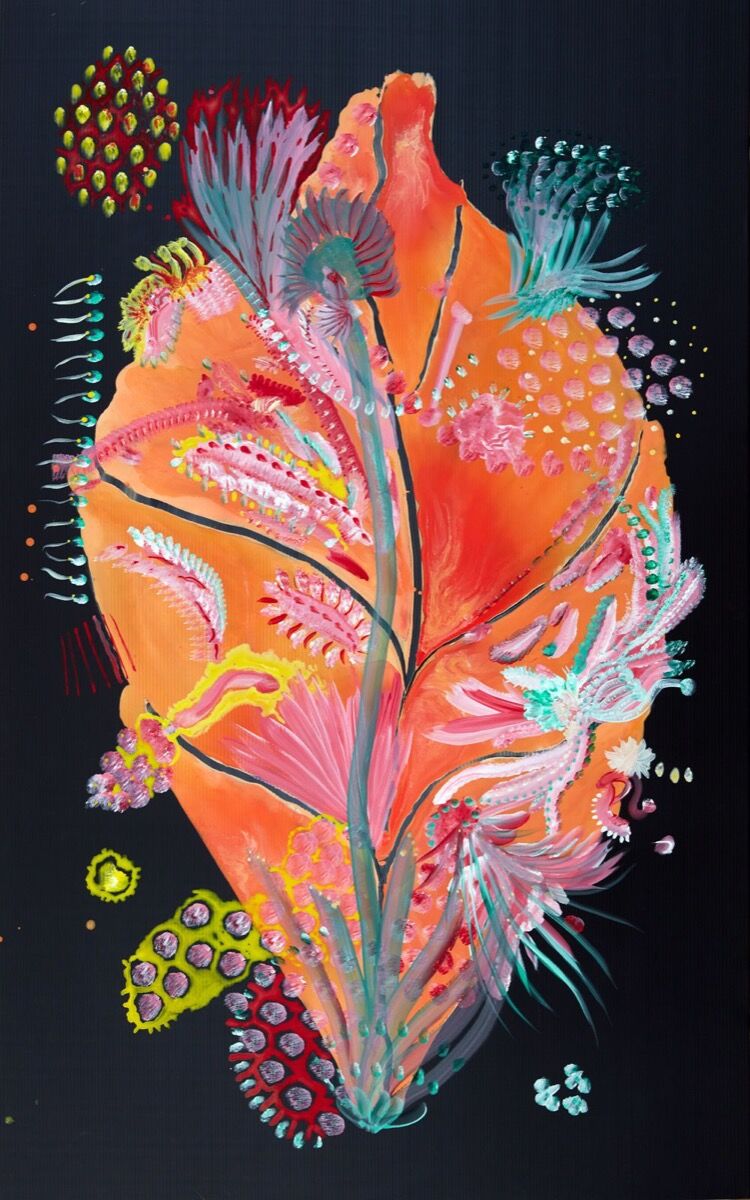 This giant acrylic painting on black corrugated plastic is part of
Kovachevich
’s newest body of work, which he developed by combining two aspects of his previous work: small-scale paintings on black backgrounds, and the plastic materials he was using for sculpture. Rave pictures imagined botanical forms that almost appear to glow, their vibrant hues and dark surrounding recalling underwater sea life like jellyfish and coral. Fresh from
Jaeger
’s studio, this piece builds upon the artist’s recent sculptural works each comprised of a single object perched upon a small table. Taches sees a table covered with a taxonomy of the young Brooklyn artist’s ceramic works. Debuting two weeks ahead of her new show at Jack Hanley Gallery, the work is comprised of dozens of pieces, spanning Etruscan-inspired vessels, long-stemmed flowers, pinch pots, and a turtle that’s been sliced in half, all done in her signature matte black glaze. The work, on offer for $18,000, can be seen as a culmination or celebration of Jaeger’s recent practice. 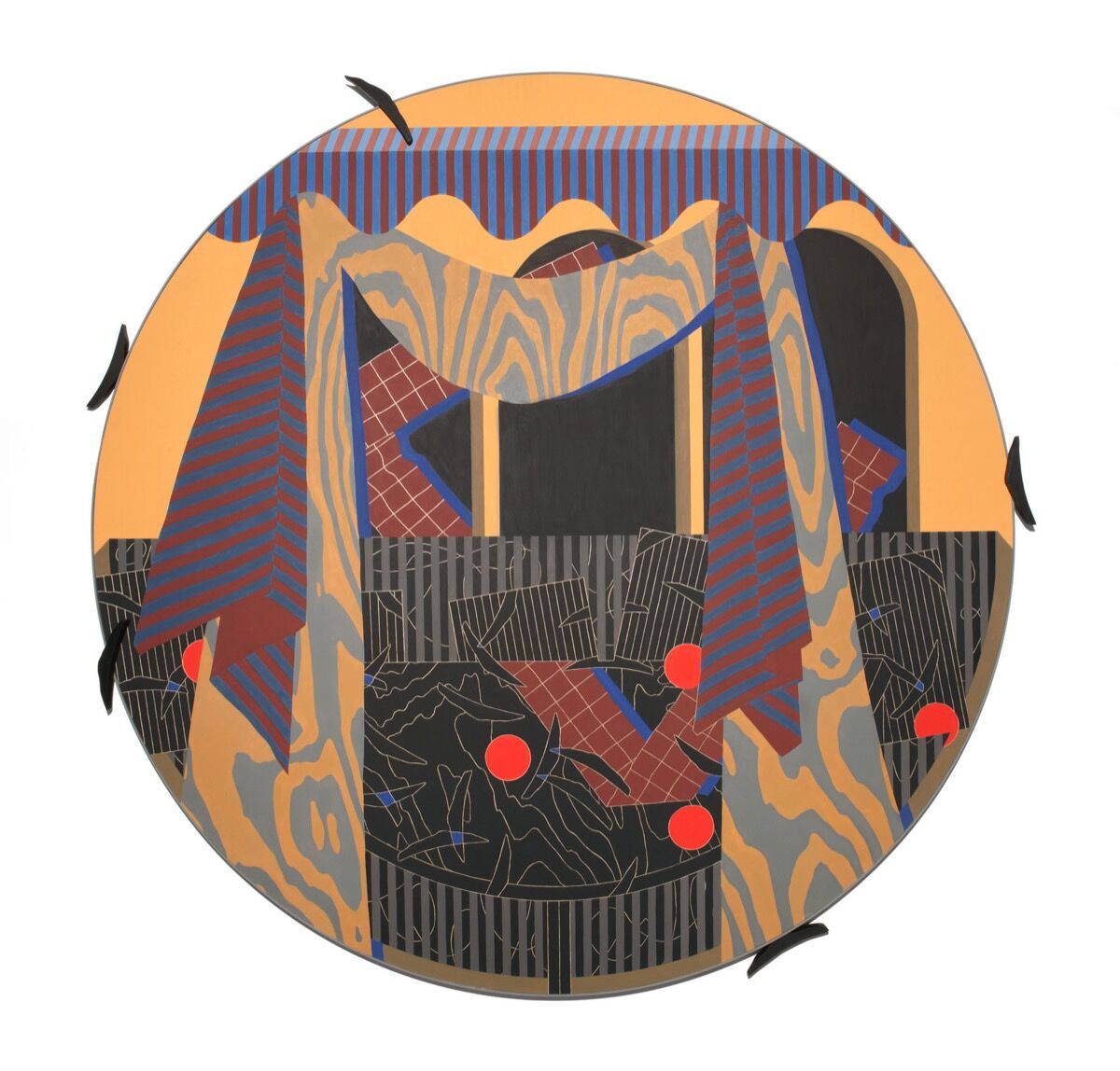 This tondo is among the 28-year-old Canadian artist’s newest works, which are meticulous abstract fields of pattern and color. Like many of the works, Heading Home is adorned with sculptural magnetic pieces along the edges of its frame, which mimic the shapes found in the composition.
Maltese
creates her work by painting on a panel, then adding fine, exacting lines to her compositions by scraping into the paint. Influenced by the Memphis Group, the artist recently had a two-person show with
Nathalie du Pasquier
, as well as a solo show at Cooper Cole.
Casey Lesser is Artsy’s Lead Editor, Contemporary Art and Creativity.