16 Critics Who Changed the Way We Look at Art

Alina Cohen
Sep 11, 2018 11:54am
For over 1,000 years, humans have attempted to define what makes an artwork “good.” Deciding factors, such as a work’s realism, beauty, decoration, and moral idealism, have gone in and out of fashion. Fresh generations of art critics have significantly spurred these shifts in taste, forever altering the public’s perception of aesthetic styles.
The following 16 critics have helped translate and unpack now-seminal artists’ occasionally confounding visions, and cemented our conception of the canon. This list, admittedly, comprises predominantly European and American white men. For centuries, they’ve dictated what artwork has been seen and appreciated. Slowly but surely, the demographic is shifting. (Although Jerry Saltz’s recent Pulitzer Prize win prompted many on the Internet to quickly assert that his fellow critic—and wife—Roberta Smith deserved it more.) Diverse critical voices don’t just offer new perspectives on art: They change how we look at the world, beyond the frame. 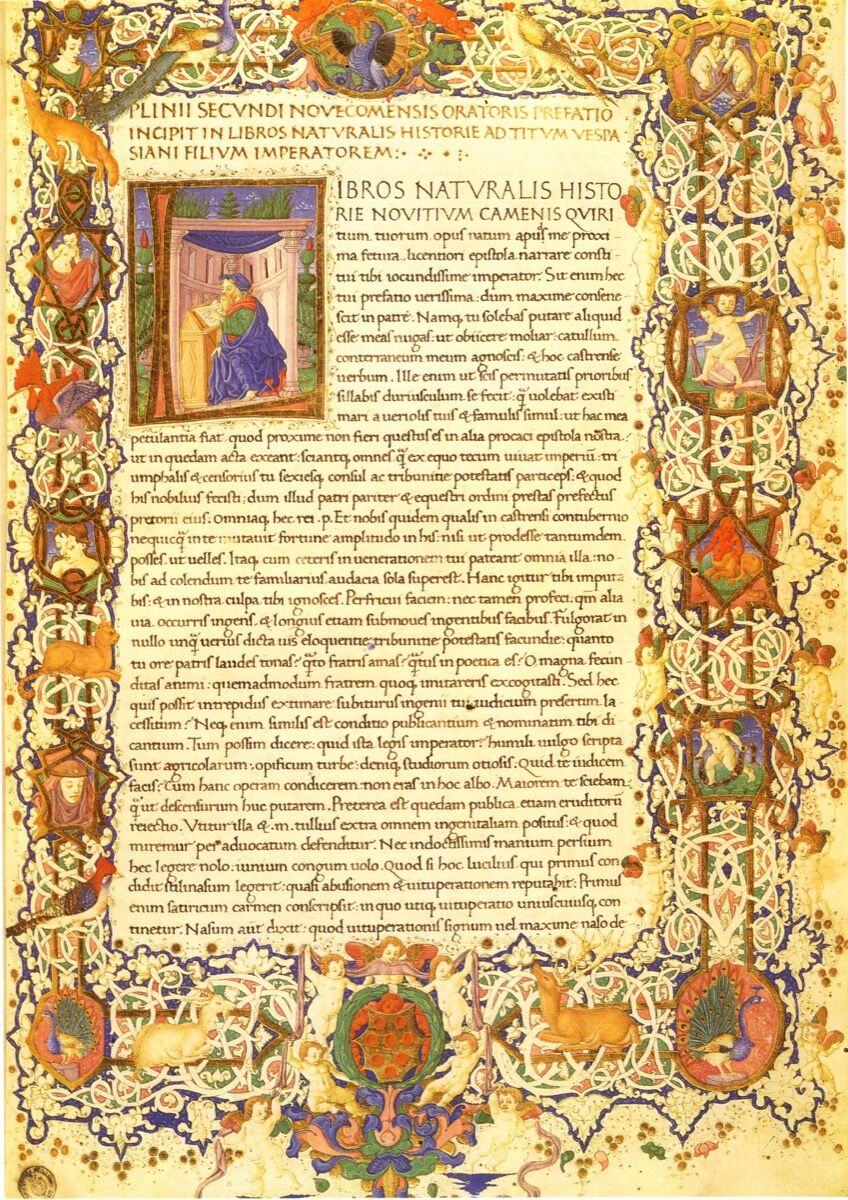 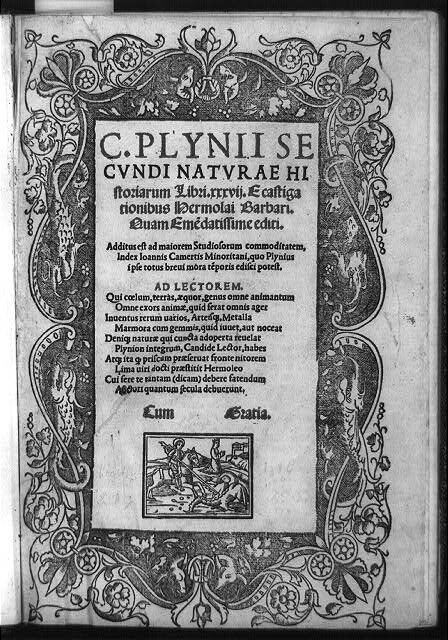 Title page of Pliny, Natural History, published 1519. Courtesy of the Library of Congress.

In his book Natural History, Roman naturalist Pliny the Elder addresses zoology, astrology, botany, and all subjects he deemed worthy of their own history, including several chapters dedicated to craftsmen, artists, and architecture. Pliny traces the origin of painting, suggesting that it began when man tried to trace his own shadow. Scholars have theorized that Pliny’s writings (in particular, his reverence for antiquity) influenced
Giorgio Vasari
, who wrote his famous history of art over 1,000 years later.

Hundreds of years ago, art was an explicit competition. In the 6th century, Chinese artist Xie He developed his “Six Principles” in order to rank painters according to merit. Even then, however, the standards were subjective. For example, “spirit resonance” refers to a certain ineffable vitality. Other measures are more technical or formal: “bone method,” or structural brush use; composition; and, in the case of artists who made copies of existing works, adherence to originals. Xie He’s principles have proven so enduring that they are still used to evaluate traditional Chinese painting today. 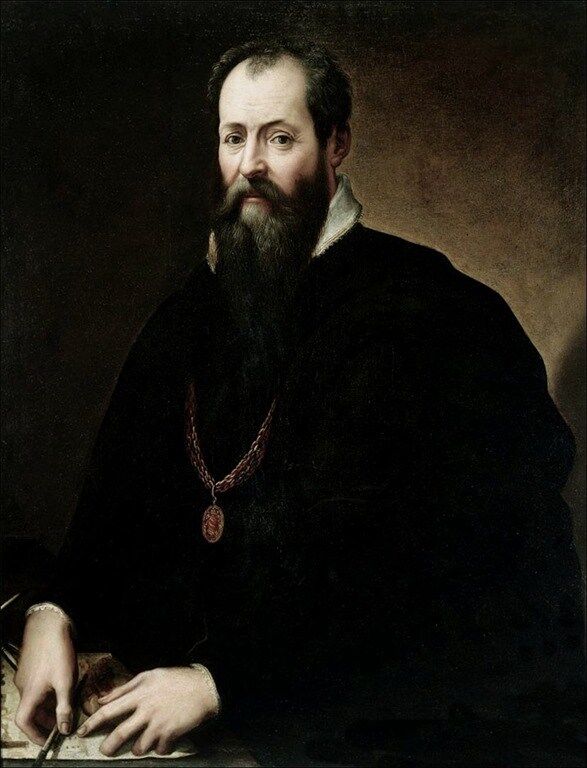 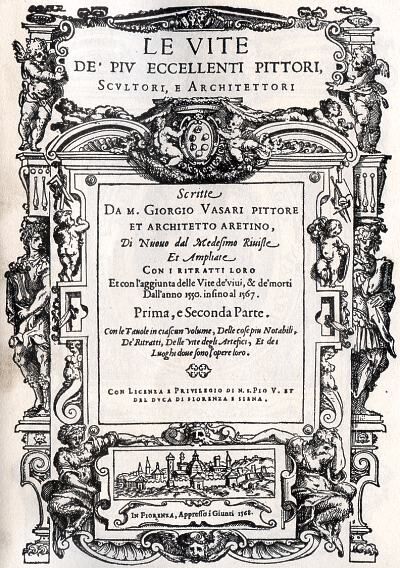 Giorgio Vasari, Cover of Lives of the Most Eminent Painters, Sculptors, and Architects, 1550. Photo via Wikimedia Commons.

Advertisement
Often considered the first art historian,
Giorgio Vasari
also established influential preferences and prejudices. His canonical 1550 text, Lives of the Most Eminent Painters, Sculptors, and Architects, created a (highly biased and exaggerated) roster of the day’s most important creative figures. They were all Italian, and skewed Tuscan, in particular (
Michelangelo
,
Giotto
,
Sandro Botticelli
). Vasari himself coined the term the “
Renaissance
,” mythologizing the so-called rebirth of culture in Europe from the 13th to 16th centuries. 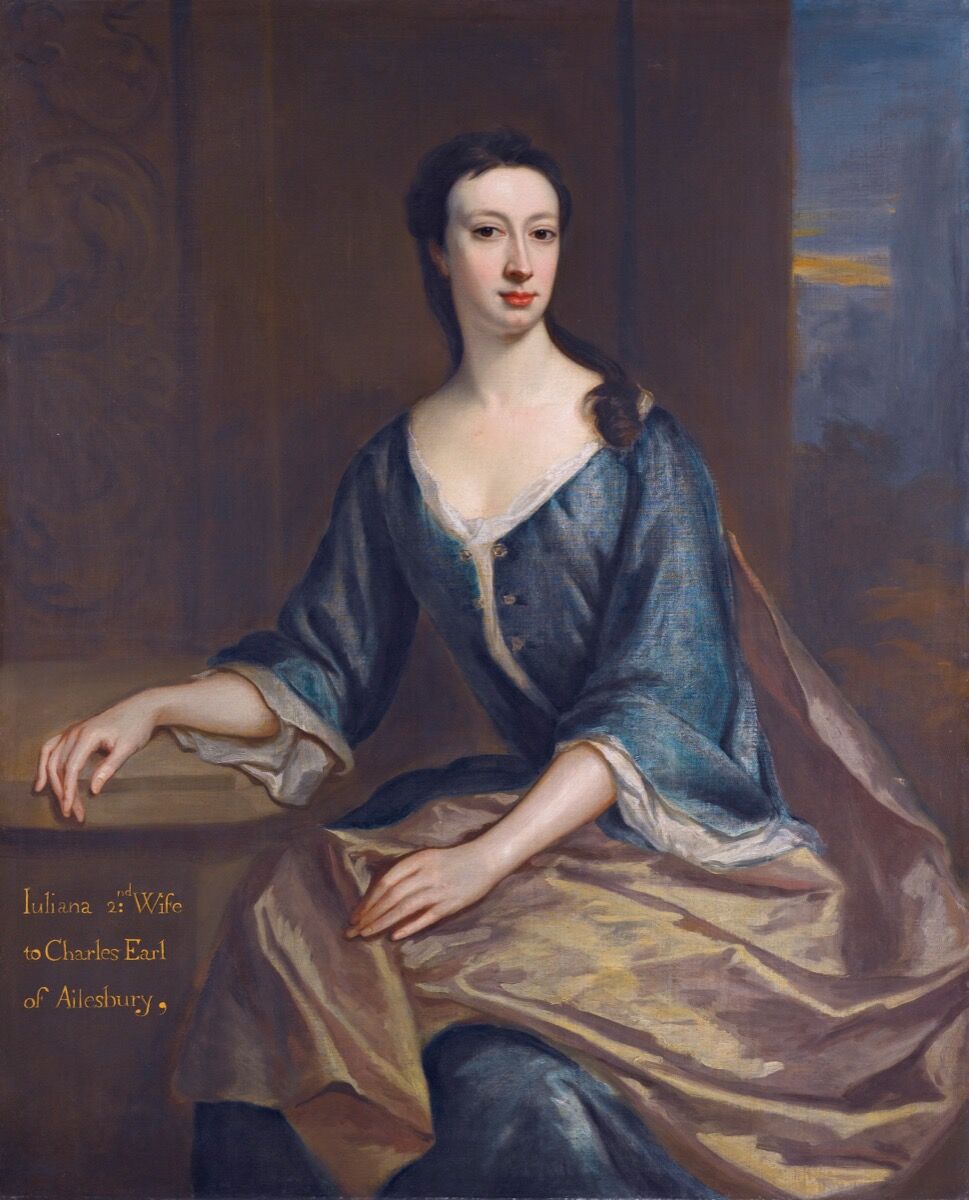 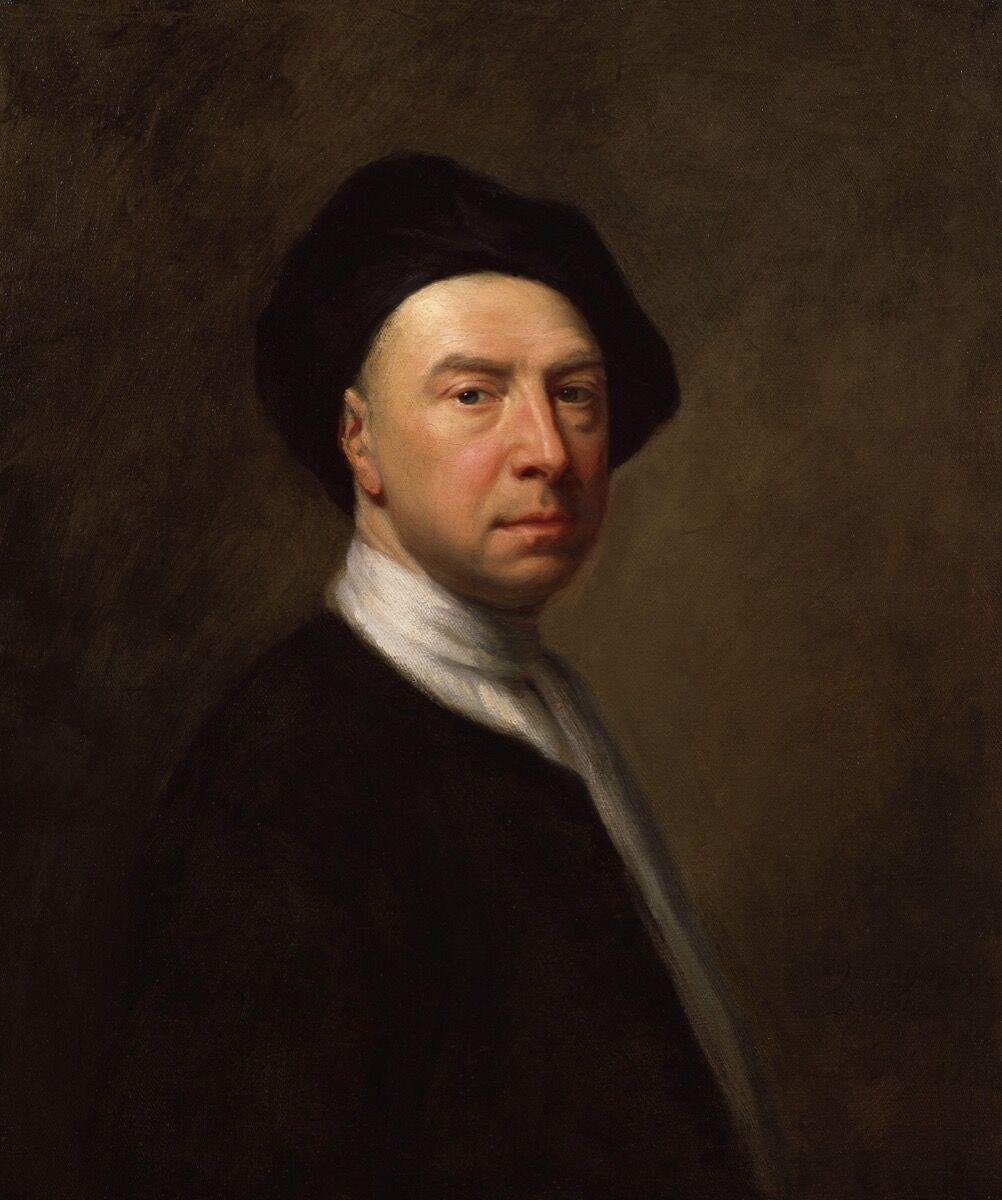 In 1715, British painter and collector
Jonathan Richardson the Elder
penned what’s widely accepted as the the first work of art theory written in English. Richardson begins his “Essay on the Theory of Painting” by finding fault with what he claims is a widely held belief: “Many, I believe, consider the art of painting but as a pleasing superfluity; at best, that it holds but a low rank with respect to its usefulness to mankind.” Painting, Richardson counters, is important because it allows us to communicate ideas, elevates us beyond brutishness, and allows for individual style or expression. Richardson is also credited as the first writer to use the term “art criticism.” In his 1719 “Essay on the Whole Art of Criticism,” Richardson attempts to lay a groundwork for how to judge an artist or a painting, as well as how to ascertain the authenticity of an artwork.

One of the earliest documented art critics in France, Etienne La Font de Saint-Yenne visited and reported on the salons at the Louvre in the mid-18th century. In a 2009 essay, Marijke Jonker posits his enduring influence on aesthetic critiques. “After a discourse on the state of contemporary art and of contemporary society,” she writes, the salon works “were then subject to critical analysis, beginning with the highest genre of history painting. This structural approach established the pattern for art criticism for more than a century to come.”
Yet La Font offered more than just a framework for writing reviews. In another 2009 essay, Katerina Deligiorgi notes that since the days of Plato, philosophers have considered the morality of art itself. In Enlightenment France, La Font was eager to integrate his revolutionary views into his writings (some scholars suggest that he was critical of the king in the years leading up to the French Revolution). Jonker, however, isn’t so convinced of La Font’s radical politics. According to her, the critic blamed art’s “decadence” on women’s “growing influence” in society. 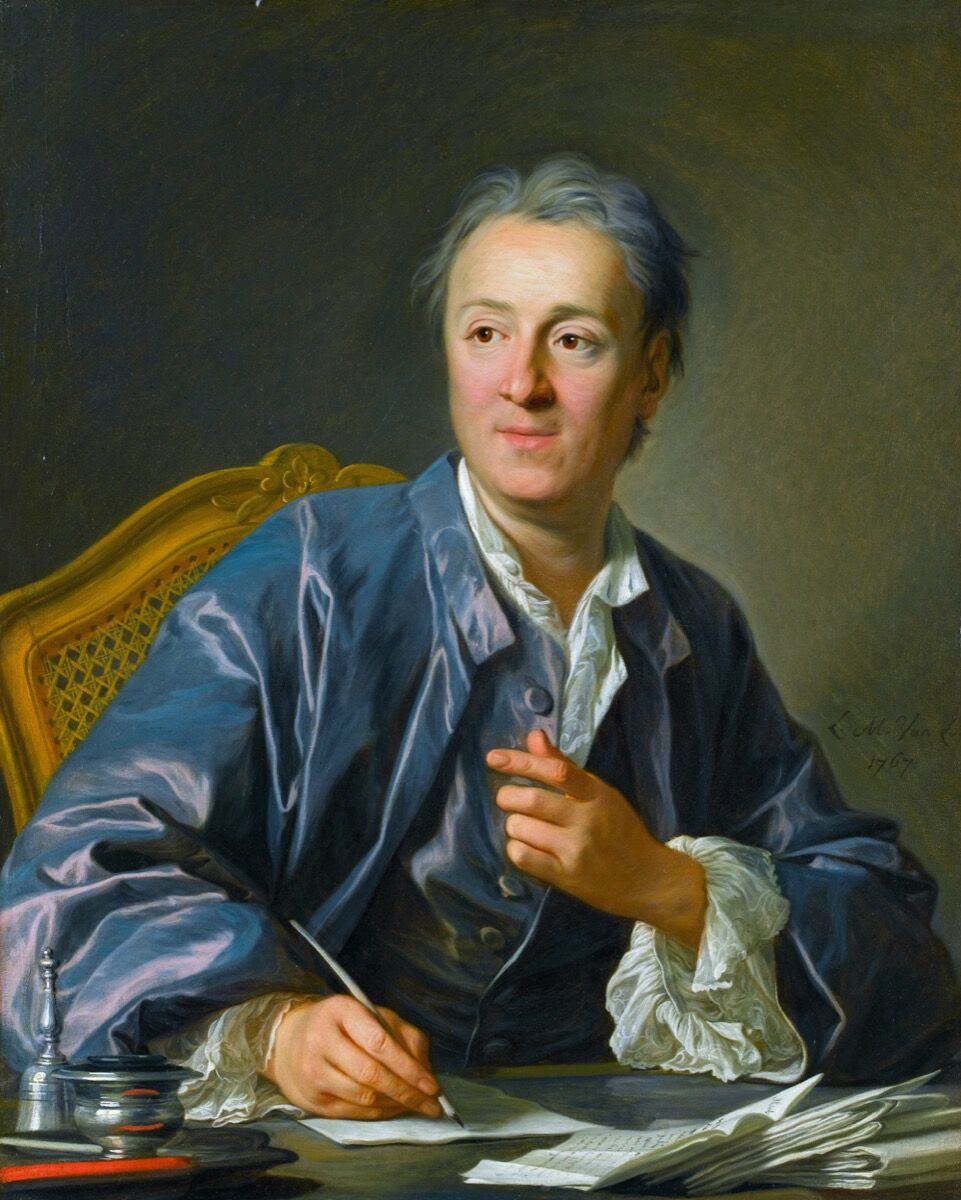 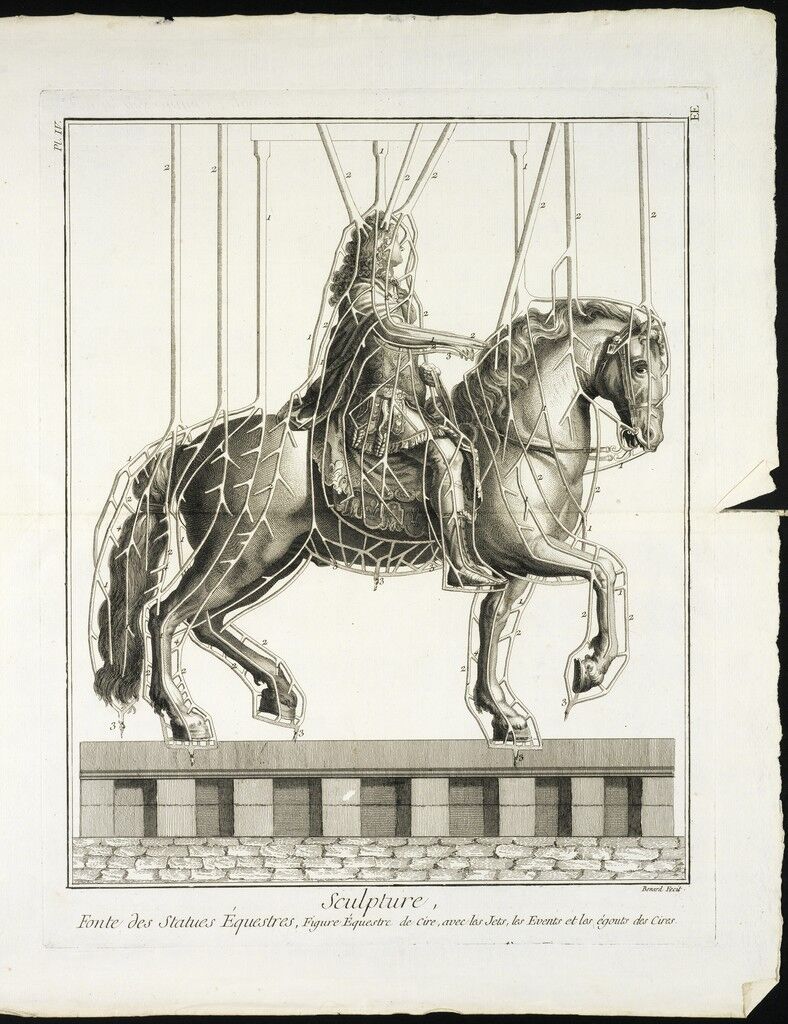 Denis Diderot
Sculpture, Fontes des Statues �questres, Figure Equestre de Cire, avec les Jets, les Events et les ‚gouts des Cires, 1762-1812
Getty Research Institute
In 1747, at the height of the Enlightenment,
Denis Diderot
began editing the widely influential French Encyclopédie, which covered philosophy, criticism, and science. Throughout his tenure, he published such major thinkers as Jean-Jacques Rousseau, Jacques Necker, and Voltaire. Diderot himself contributed many articles on literature, as well as art. His “Essay on Painting” (written in 1765, published in 1796) influenced both poet Charles Baudelaire (himself a prominent art critic) and polymath Johann Wolfgang von Goethe.
Diderot began visiting the salons at the Louvre in 1759. According to Thomas Crow, he’d assess the artwork during the summertime run of an exhibition, then spend months writing his analyses. Perhaps more than any of his predecessors, Diderot integrated his own personality into his long, involved art essays. He wrote not for political ends or for the benefit of other artists, but, perhaps, for himself. This style introduced a significant amount of subjectivity into the genre. 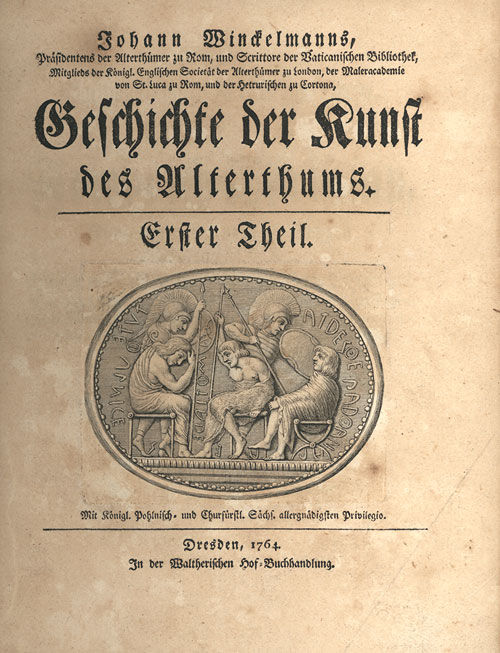 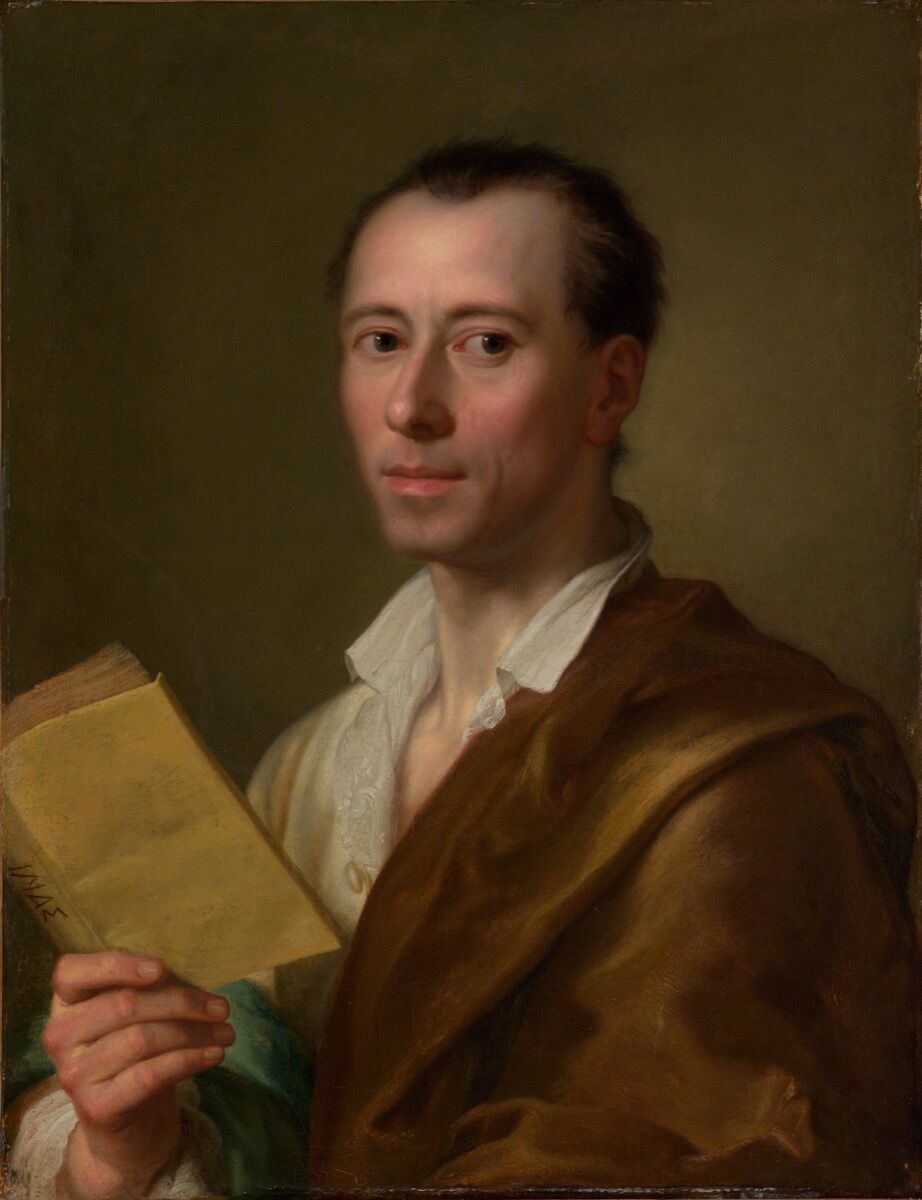 German art historian
Johann Joachim Winckelmann
encouraged the resurgent interest in classical art during the Enlightenment. In his 1765 essay “Reflections on the Painting and Sculpture of the Greeks,” he asserts: “The only way for us to become great, or even inimitable if possible, is to imitate the Greeks.” Working at the Vatican (as a librarian, then president of antiquities, and finally secretary to a cardinal), Winckelmann had access to the Catholic Church’s vast collection of ancient treasures, and developed a system to distinguish different periods in early Western art history that is still used today.
Notably, Winckelmann never visited Greece: His life was cut short when an acquaintance murdered him in Italy under mysterious circumstances. “On the learned world of Europe the effect of Winckelmann’s murder was similar to that of President Kennedy in our own time,” claimed Lionel Grossman in a 1992 essay. Call it art criticism’s greatest unsolved mystery. The sordid affair has inspired poems, novels, and plays. 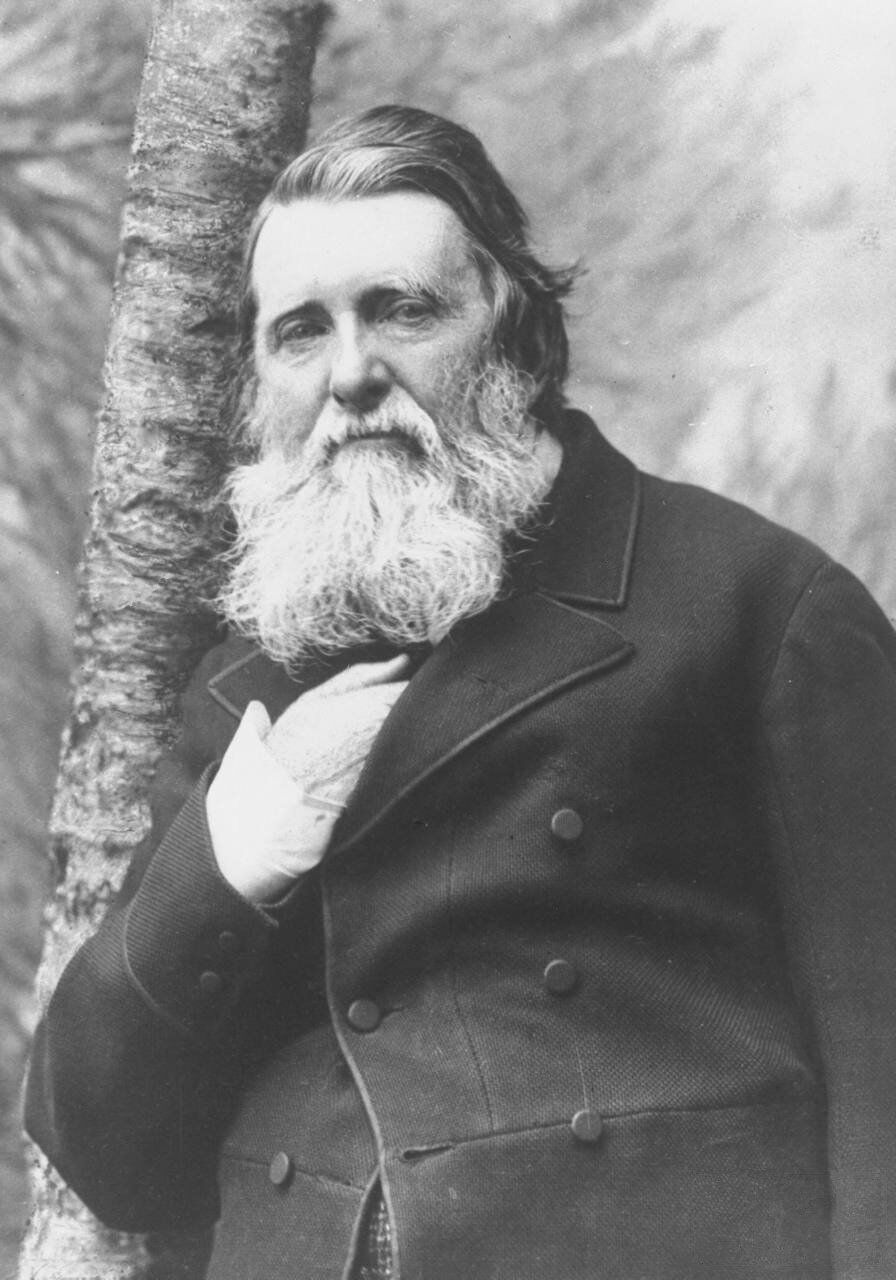 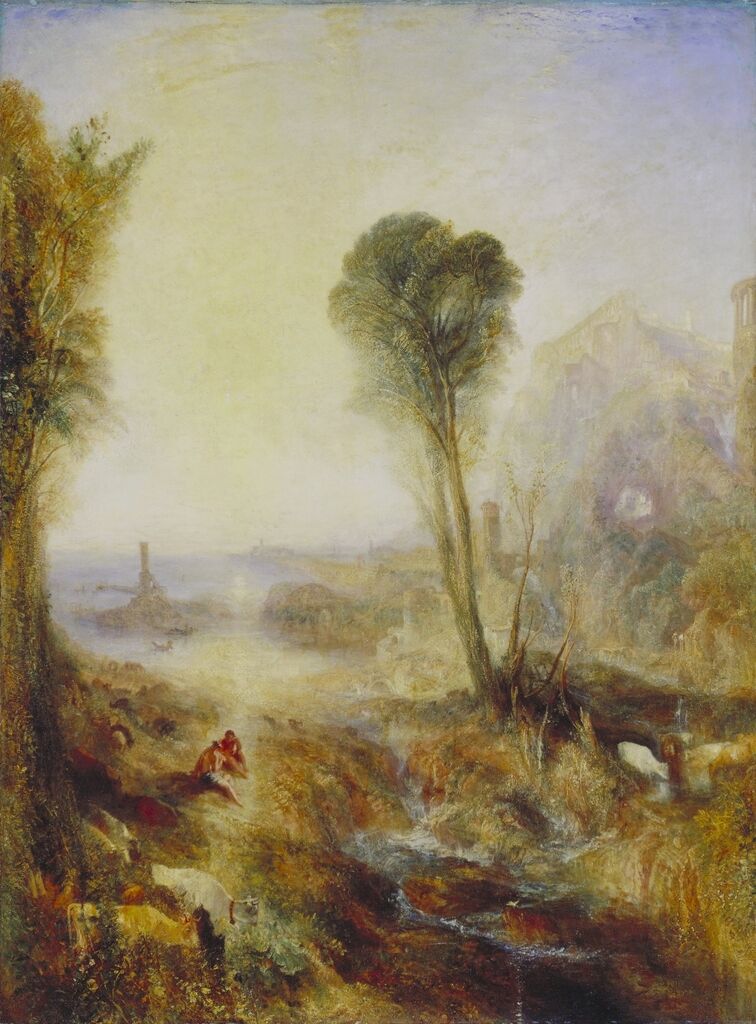 J. M. W. Turner
Mercury and Argus, before 1836
"J. M. W. Turner: Painting Set Free" at The J. Paul Getty Museum, Los Angeles (2015)
A devotee of
J.M.W. Turner
’s landscapes,
John Ruskin
concerned himself with what “truth” meant in painting. He published five volumes of his Modern Painters (1843–60), which celebrated and popularized
Romantic
art. Ruskin helped to cement Turner’s legacy and translate his ideas into persuasive critique—his writings encouraged the English to accept the painter’s later, more abstract work. Yet Ruskin’s moral view of art eventually lost out to the philosophy of British-based aesthetes such as
James Abbott McNeill Whistler
, who favored “art for art’s sake.” Truth, according to them, was of no consequence to aesthetic production. 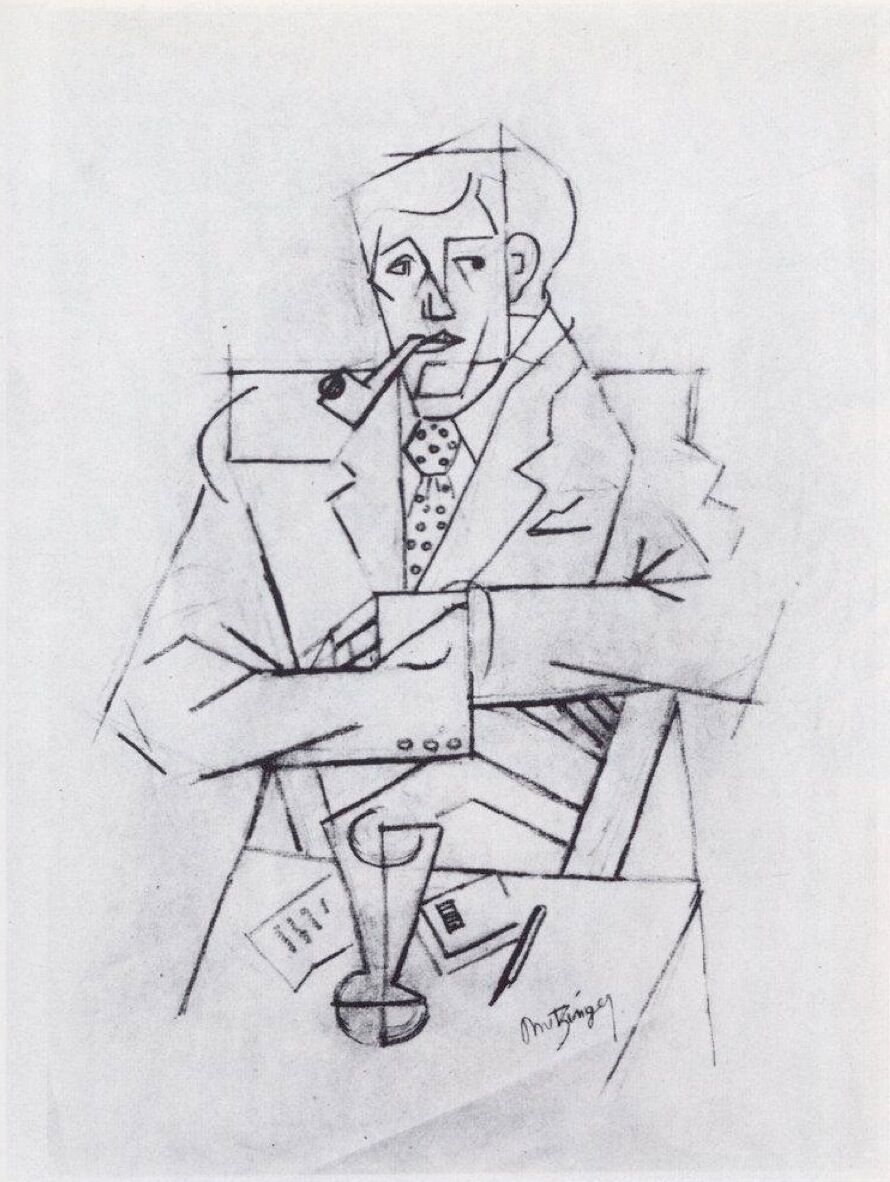 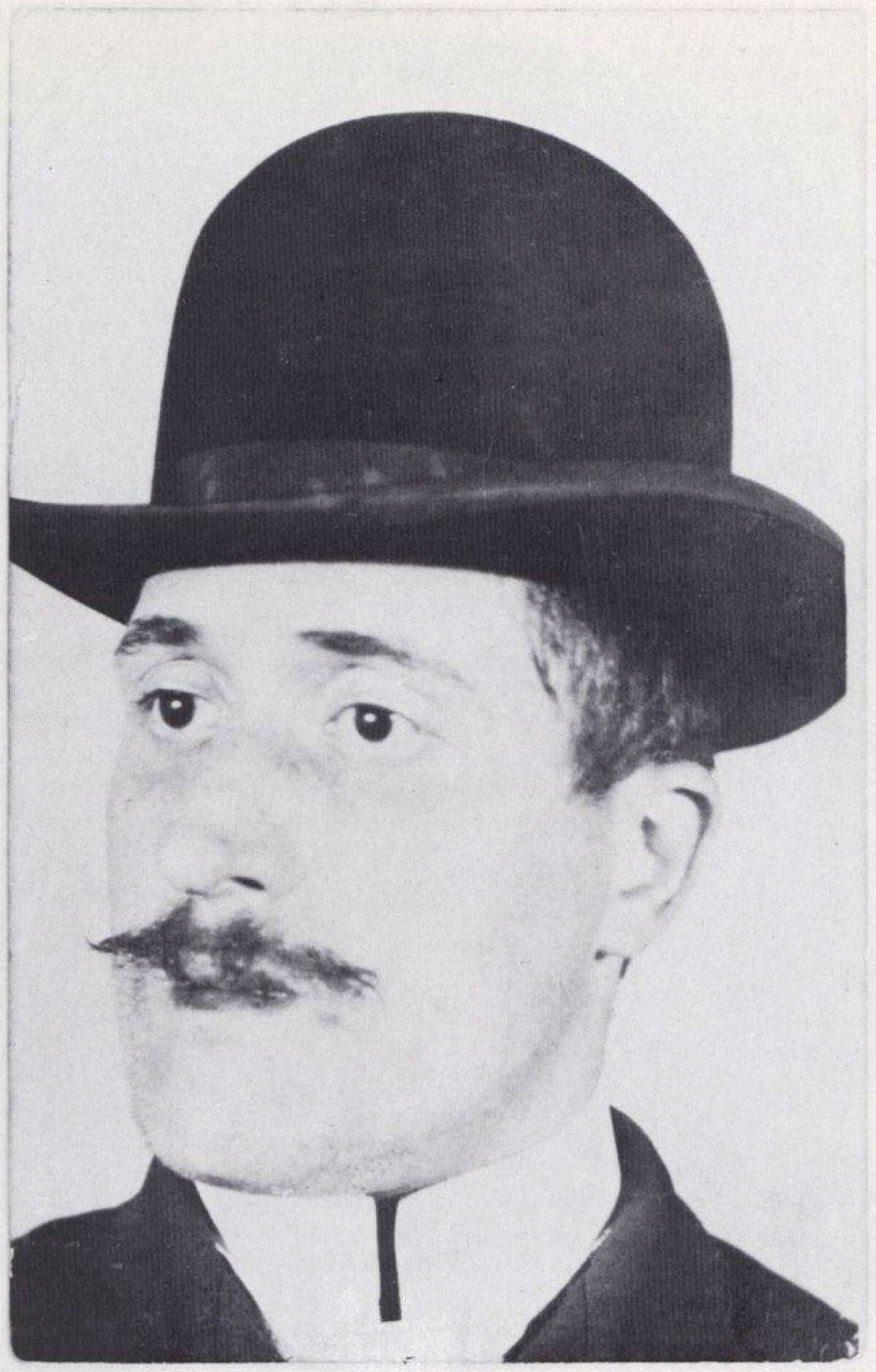 Best known as a stylistically innovative poet, GuillaumeApollinaire is also responsible for popularizing modernist art. In particular, he supported the
Cubist
endeavors of his friends
Pablo Picasso
, Juan Gris, and
Georges Braque
well before the public accepted their new, fractured painting style. In a 2003 essay, Pamela A. Genova connects the painters’ patchwork technique with the poet’s verse. Apollinaire identified, she writes, with “the juxtaposition of reality and imagination, and the simultaneity of spatial and temporal movement.” Apollinaire wrote prefaces to salon catalogues, as well as a text, The Cubist Painters, which lyrically affirmed the artists’ place in history. 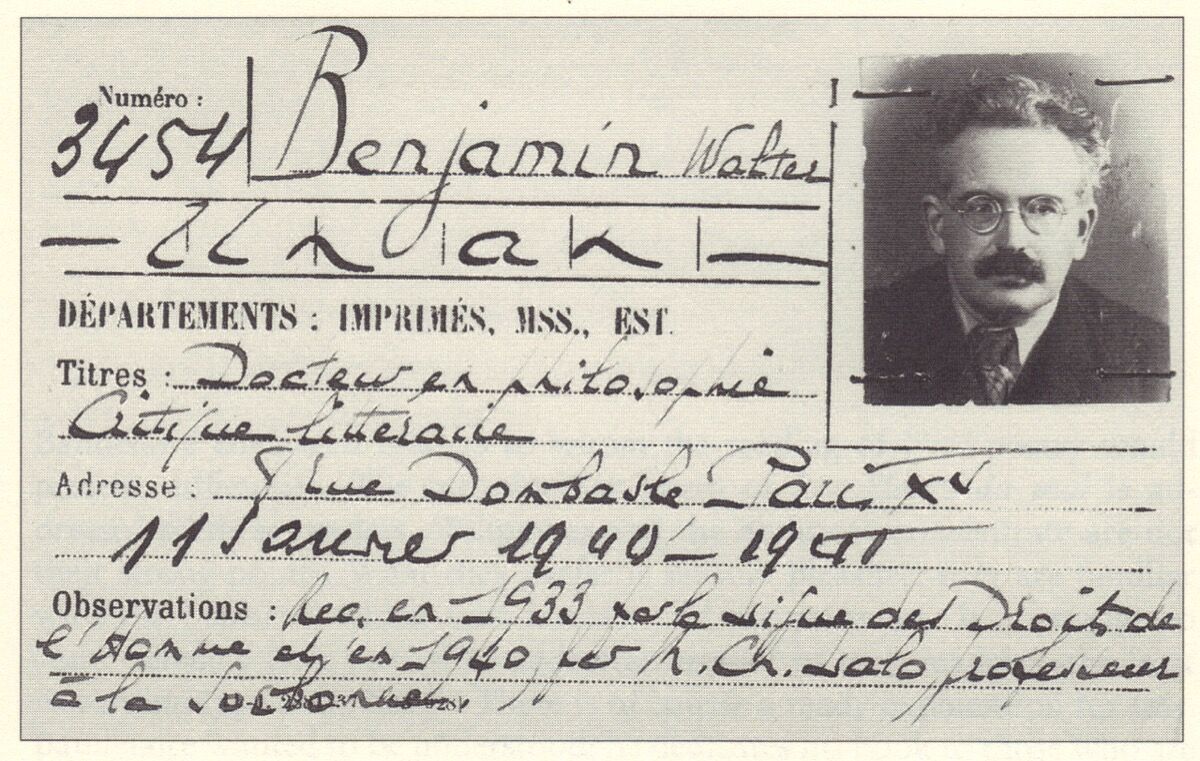 Walter Benjamin’s 1935 essay “The Work of Art in the Age of Mechanical Reproduction” situates art within a larger socioeconomic context. He notes that as long as humans have been making art, they’ve also been copying it—printing, retracing in a master’s style, or reusing the same sculptural molds. Yet in the modern age, photography and film could capture the world better than any traditional art form. Then why are painting and sculpture still worthwhile? Benjamin suggests that what truly makes an original artwork special is intangible. “Even the most perfect reproduction of a work of art,” he writes, “is lacking in one element: its presence in time and space, its unique existence at the place where it happens to be.” After Benjamin, it’s difficult not to connect an artwork to the larger system in which it operates. 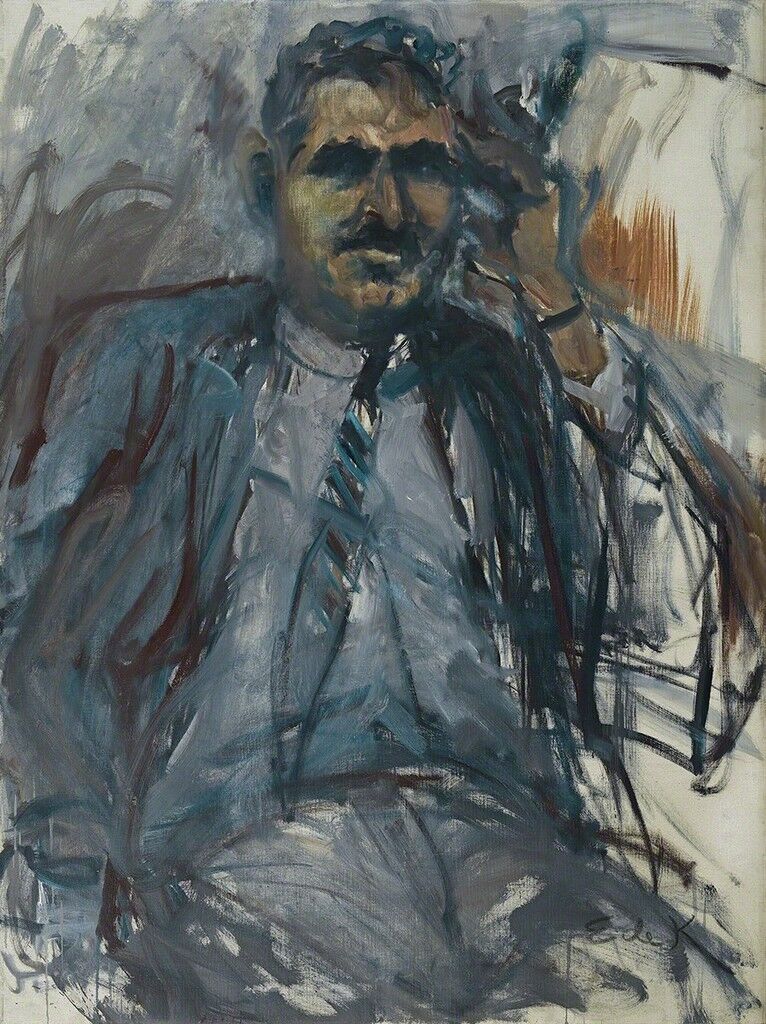 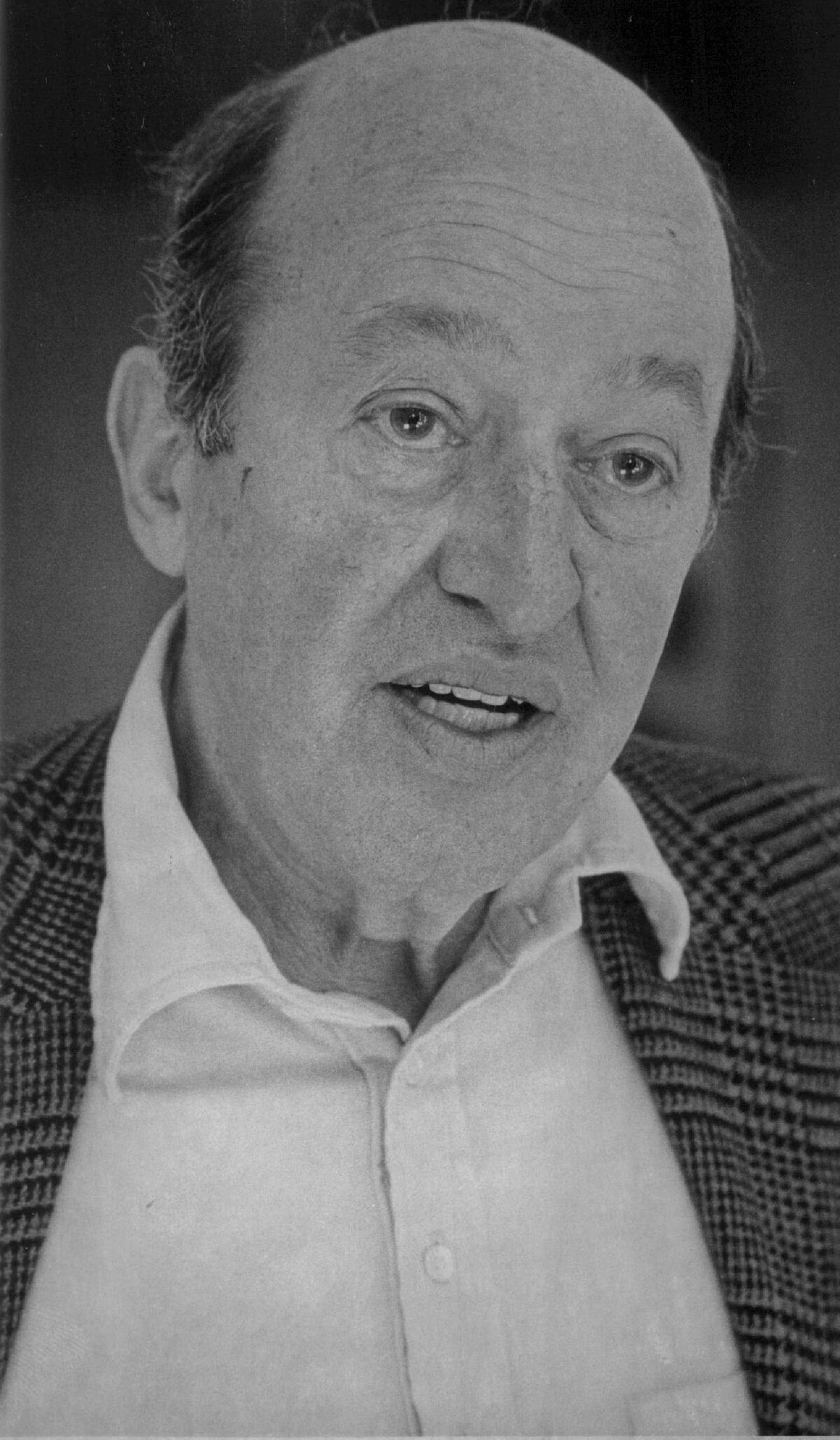 A critic for the erudite quarterly Partisan Review and then The New Yorker, Harold Rosenberg may be most famous for developing the term “
action painting
.” Along with Clement Greenberg, he avidly promoted
Abstract Expressionism
, which required fluid, personal gestures (or actions) to apply paint to canvas. He was a particular fan of
Willem de Kooning
, while Greenberg preferred
Jackson Pollock
.
Greenberg, for his part, wrote for The Nation and Artforum, and offered a doctrinaire approach to art. In his writings, abstraction is the endgame, and art’s political or social context is unimportant. In his 1975 book The Painted Word, Tom Wolfe writes: “Greenberg hadn’t created Pollock’s reputation, but he was its curator, custodian, brass polisher, and repairman, and he was terrific at it.” A critic, Wolfe asserts, can also be an artist’s best publicist. 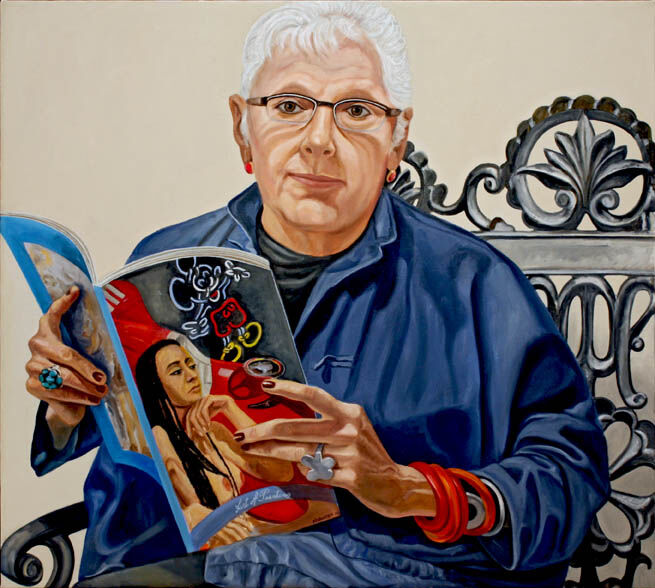 Linda Nochlin’s influential 1971 essay “Why Have There Been No Great Women Artists?” posited a simple reason for the title question. The canon is full of male artists not because they’re better, but because institutional structures have prevented women from advancing in the field. Nochlin suggests that, for centuries, “good art” has merely been sanctioned by white men. Her essay called for a change. Nochlin was a prolific author, and throughout her career, she wrote monographic essays on female artists like
Louise Bourgeois
,
Mary Cassatt
, and
Sophie Calle
, among many others.

Lucy Lippard, “Changing: On Not Being an Art ‘Critic.’”

From the start of her career,
Lucy Lippard
was critical of the division between art and earthly concerns. Unlike Greenberg and Rosenberg, her interests lay in unpacking the larger social context in which artworks were produced. In 1977, she co-founded the feminist art journal Heresies. For Lippard, art and activism could be linked. The collective of women artists who contributed to the journal—a group that included
Joan Snyder
,
Miriam Schapiro
, and
Pat Steir
—frequently addressed female representation in its pages.

Prominent editor and scholar Rosalind Krauss was propelled to art world notoriety in 1974, when she published an article in Art in America taking to task the imperious critic Clement Greenberg for mishandling the estate of sculptor
David Smith
. Krauss was making a name for herself as a proponent of the burgeoning
Minimalist
scene (she once wrote an entire essay on how to explain
Richard Serra
to the French). In 1976, she co-founded October, an influential, theory-heavy journal that introduced the dense post-structuralist ideas of French thinkers like Jacques Derrida and Michel Foucault to American art audiences.

Why Walter Benjamin Is the Art World’s Favorite Theorist 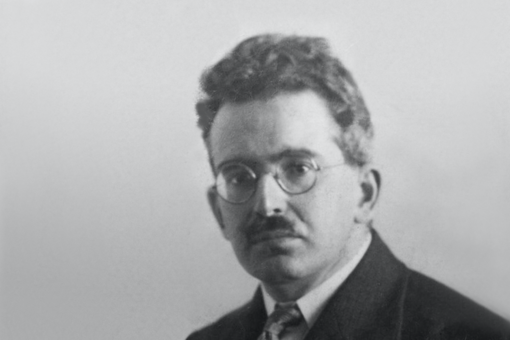 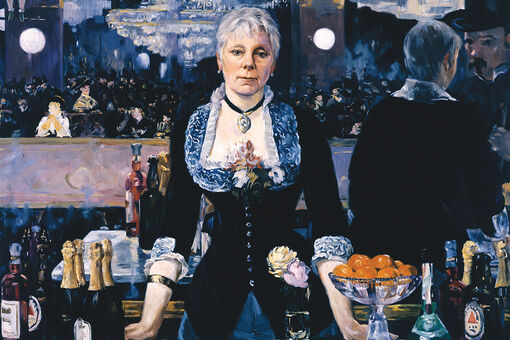 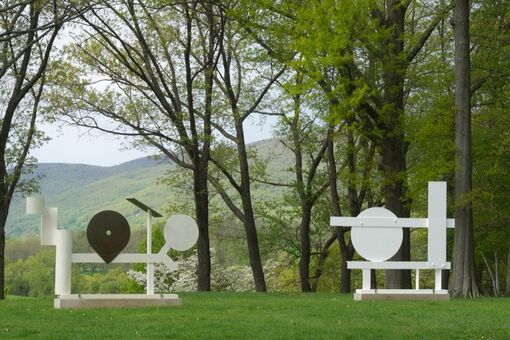