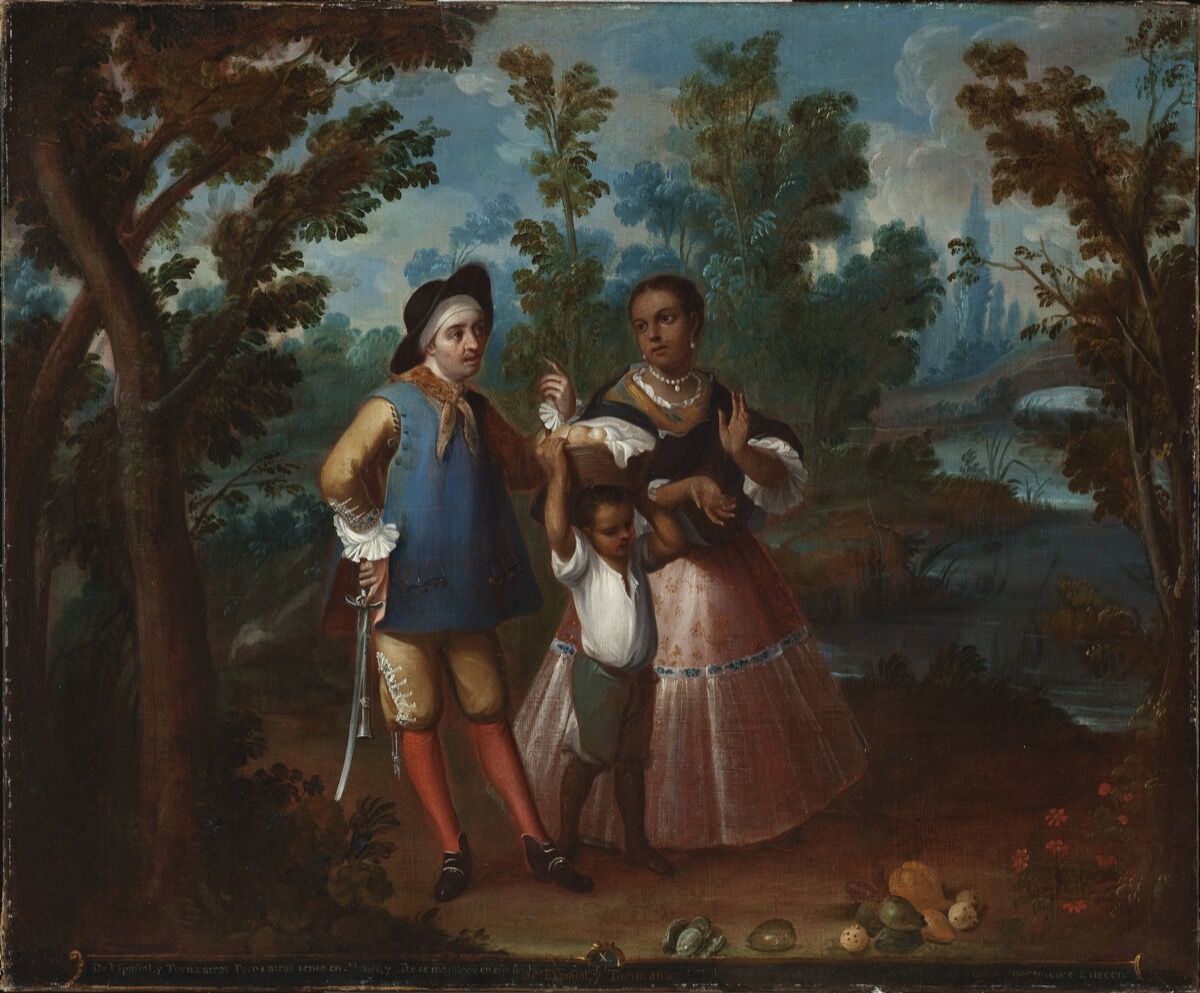 In 18th-century Mexico, a curious genre of painting was born. Then known as New Spain, Mexico was inhabited by Amerindians (indigenous people of the Americas), Spaniards, and Africans (whom the Spanish brought over as slaves). Fueled by social anxieties, Spaniards began commissioning paintings to illustrate the process of racial mixing, or miscegenation. Known as casta paintings, these artworks aimed to portray interracial couples and their children in domestic scenes, embellished with detailed depictions of typical dress, local produce, and landscapes. But they were far from factual, and informed by deep prejudices.
“The genre’s premise…purported that successive combinations of Spaniards and Indians resulted in a vigorous race of ‘pure’ or white Spaniards, while the mixing of Spaniards and Indians with Africans led to racial degeneration,” wrote LACMA curator Ilona Katzew, a leading scholar on the subject, in the wall text of her exhibition “Painted in Mexico, 1700–1790: Pinxit Mexici.” Small inscriptions printed onto the paintings, with terms for distinct combinations of races, only reinforced the paintings’ fictive narratives and racist underpinnings. And while they can only truly be understood in their original context, casta paintings remain remarkably jarring three centuries on with their deftly painted scenes, nonchalant classifications, and bewildering implications.
Casta, the Spanish word for caste, referred to New Spain’s mixed-race people and the hierarchical system whereby socioeconomic status was tied to race. A typical casta work involved either a set of 16 related paintings or a single work divided into 16 compartments, with each scene illustrating different interracial couples and their kin; as the scenes progress, they transition from the supposedly most “superior” families to the least. Accompanying phrases painted onto the canvas spin an elaborate web of terms for mixed-race people and their descendants. “The paintings attempt to chart out the process of miscegenation, but ultimately lay bare the impossibility of distilling society into a fixed number of variables,” Katzew told Artsy. 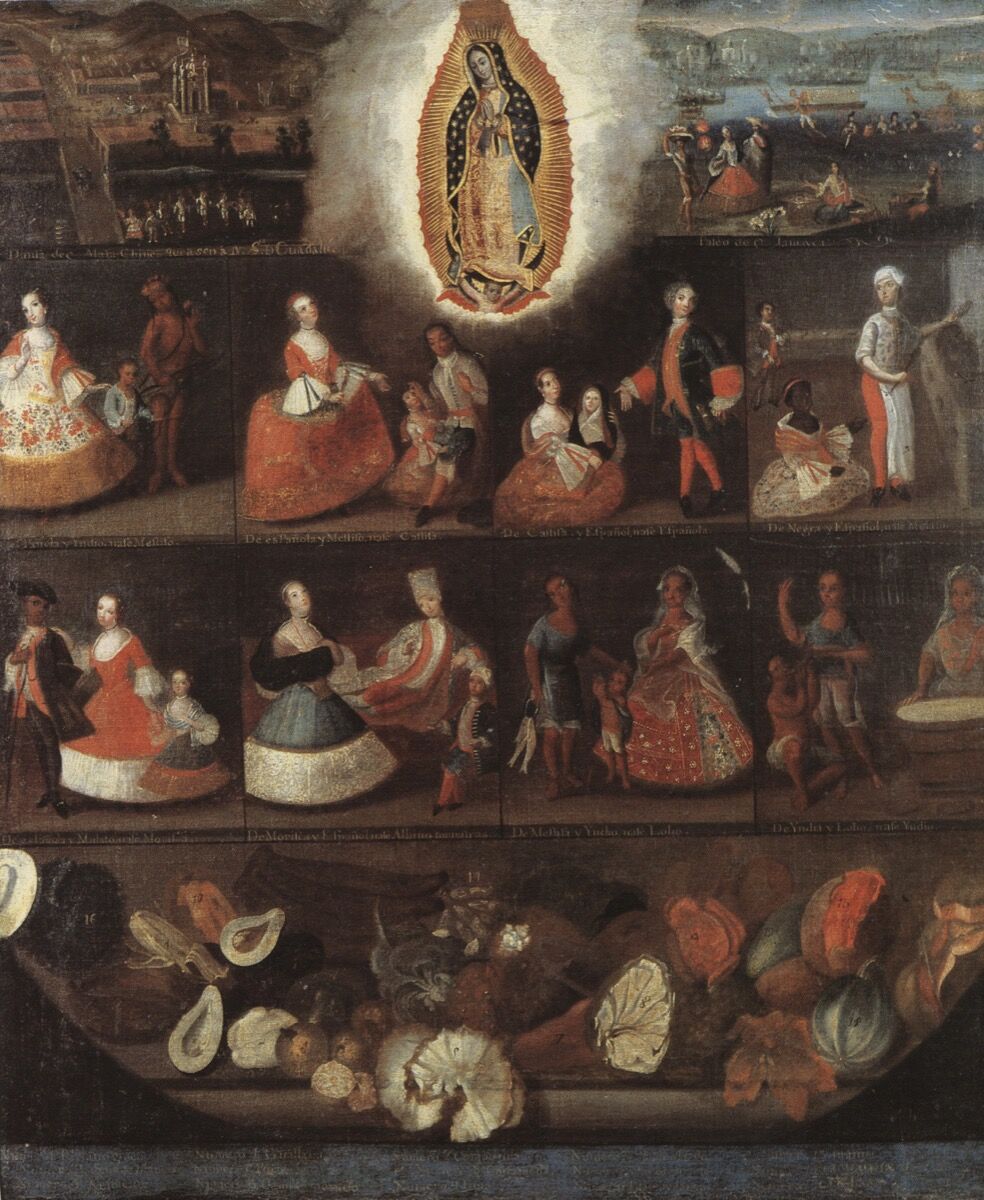 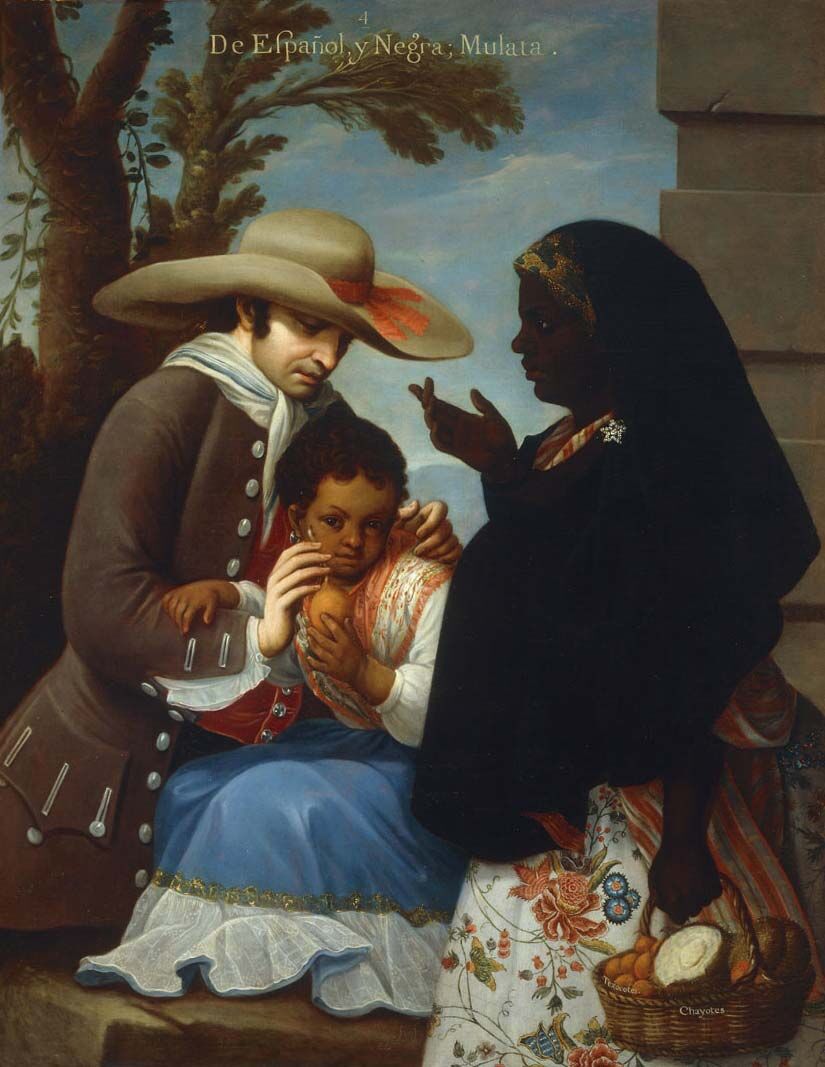 As a means of classification, casta paintings have been linked to the Enlightenment impulse towards developing taxonomies. But with their absurd ethnographic fallacies, they’ve proven to be much more compelling in terms of what they can tell us about 18th-century Mexico.
For example, a 1763 painting in LACMA’s collection by Miguel Cabrera, a sought-after painter of New Spain, bears the phrase “De Español, y Morisca, Albina” (“From Spaniard and Morisca, Albino Girl”). It pictures a Spanish man and a “morisca” woman, meaning she would have had parents who were Spanish and African, respectively. The child at the center of the canvas is albino, playing into the theory at the time that albinism was linked to people of African descent. This is but one of at least 16 quasi-scientific scenarios perpetuated through the paintings.
Some 2,000 casta paintings are known to have been made in 18th-century Mexico, a large output that indicates the demand for this work, according to Katzew. As she wrote in an essay, these paintings were popular among “colonial officials, ecclesiastical authorities, Enlightenment thinkers, and naturalists” within both New Spain and Europe. Some sets, Katzew added, were acquired by European collectors who assembled cabinets of natural history (curios or entire rooms that gathered together art and objects from around the world). 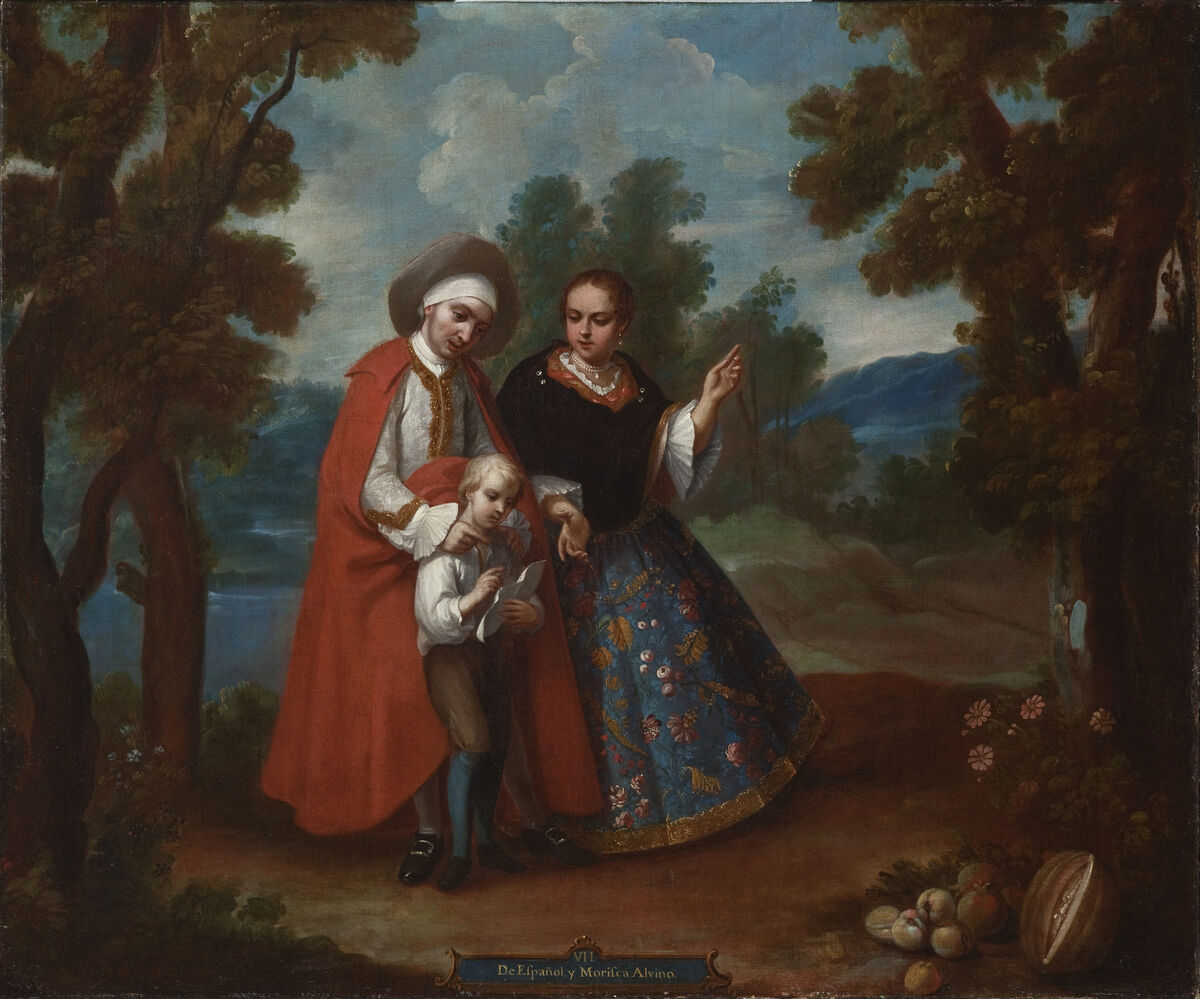 Advertisement
They were made by some of the leading artists of the day—Mexican-born painters including Cabrera, as well as
Manuel de Arellano
,
Juan Rodríguez Juárez
, José de Ibarra,
Juan Patricio Morlete Ruiz
, Andrés de Islas, Luis de Mena, and Francisco Clapera, among others. And as demand increased during the second half of the 18th century, some anonymous artists began producing them, as well.
Though casta paintings are unique, there are some precedents that may have informed these artists, such as European costume books, which included illustrations of peoples around the world, and cartas ejecutorias de hidalguía—documents used in Spain to verify a family’s nobility, which included family portraits.
The hierarchical society of New Spain “placed a premium on nobility of birth,” Katzew wrote in the catalogue for “Painted in Mexico, 1700–1790.” Colonial legislation specified that Spaniards and Amerindians had “pure blood,” but as they mixed with people of African descent, that purity was thought to degenerate (this was while slavery was happening in Mexico; it was abolished there in 1829). Spaniards held the highest rank, though; you can see through the paintings that when a Spaniard and an Amerindian have children, by the third generation of descendants, they’re able to produce a child who was considered Spanish.
In contrast, when Spaniards or Amerindians have children with Africans, “they go down in the racial pole,” Katzew added, noting that this is reflected in the quality of the clothing depicted, as well as their occupations and facial expressions. When looking at a casta painting of the gridded, composite variety, the families depicted in the bottom rows typically wear disgruntled or longing looks. They’re dressed in plain garments, carrying food or other wares for sale. Their children are often misbehaving. 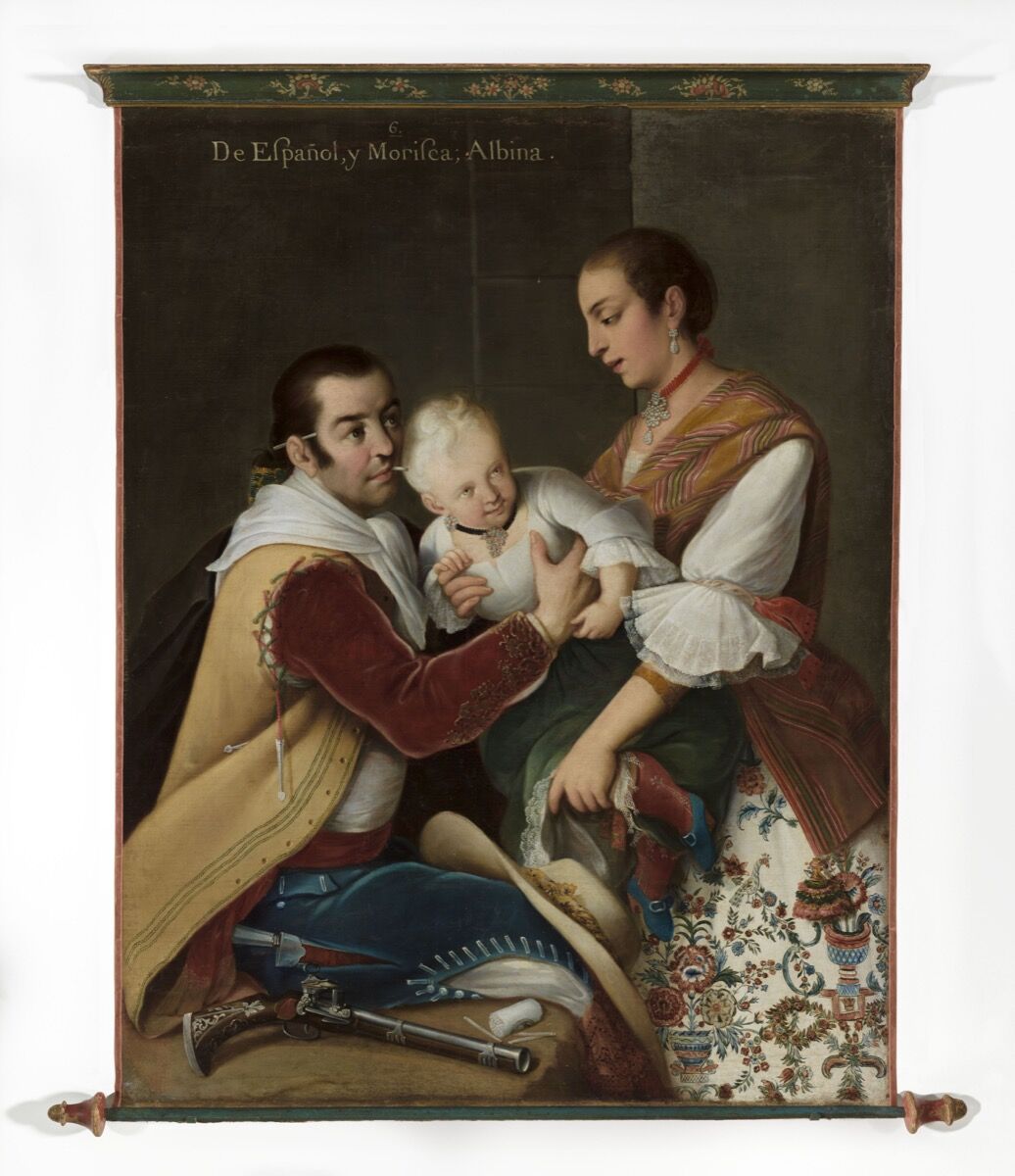 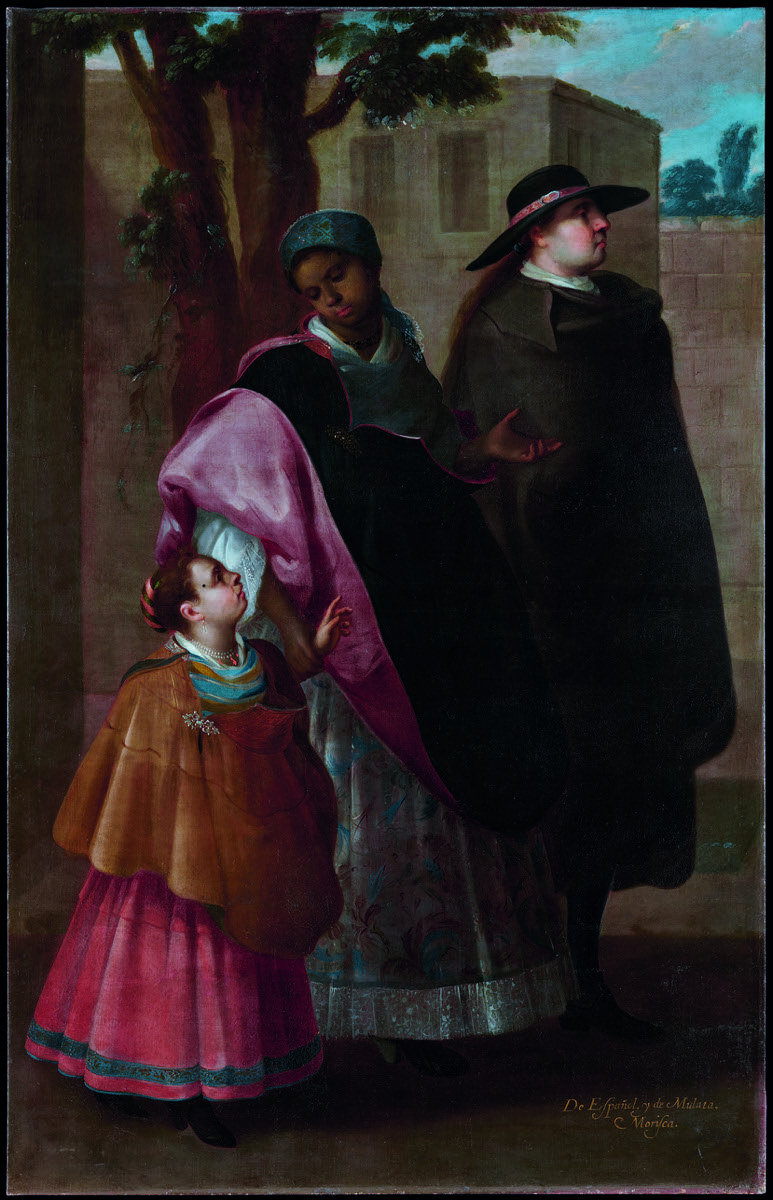 The paintings were largely invented “to impose order on what was perceived to be mostly a hybrid and therefore unruly society,” Katzew has explained. At the time, Europeans believed that people living in the Americas, regardless of ethnicity, “were degraded hybrids, which called into question the purity of blood of Spaniards and their ability to control their subjects,” Katzew has written. So, painting pictures of family units—ranked by purity of blood, with Spaniards at the top—was a means of quelling anxieties over not just miscegenation, but colonization more broadly.
The casta works behold a tension “between the lushness of the paintings and the story they charted,” which is what led Katzew to study them initially, she told Artsy. While they portray racial mixing as “degenerative,” at the same time, they “presented the New World as a place of boundless natural wonder and emphasized the colonists’ pride in the diversity and prosperity of the land,” she has written, nodding to the finely wrought, nature-filled backgrounds that many of the families are painted into.
In the time since Katzew first encountered casta paintings in 1990—at an exhibition in Mexico City—they’ve become relatively well-known in the U.S. because of their focus on race and identity, she explained. (Katzew has written several books and essays and curated multiple shows on the subject.)
While stressing that casta paintings should be valued for their artistic merits, Katzew said, “they are compelling documents that explain, in part, the origin of racial thought in the early modern world, which still impacts society today,” she told Artsy. Indeed, in light of widespread racial profiling and discrimination against refugees from Central and South America trying to pass through the U.S.-Mexico border, these works are sadly still relevant.
It’s key, Katzew noted, to remember that casta paintings are essentially fictional depictions. Still, she said, opinions and notions surrounding race are important, since they have “continued to shape society today and the allocation of opportunities,” she explained. “Casta paintings can help us understand the historical underpinning of many notions that persist to this day. In this sense, it is essential to view them within the specificity of their own historical and artistic context, keeping in mind their contradictions and complexity.”
Casey Lesser is Artsy’s Lead Editor, Contemporary Art and Creativity.
Correction: A previous version of this article misstated that the capital of Spanish America. The capital of New Spain was Mexico City.
Related Stories