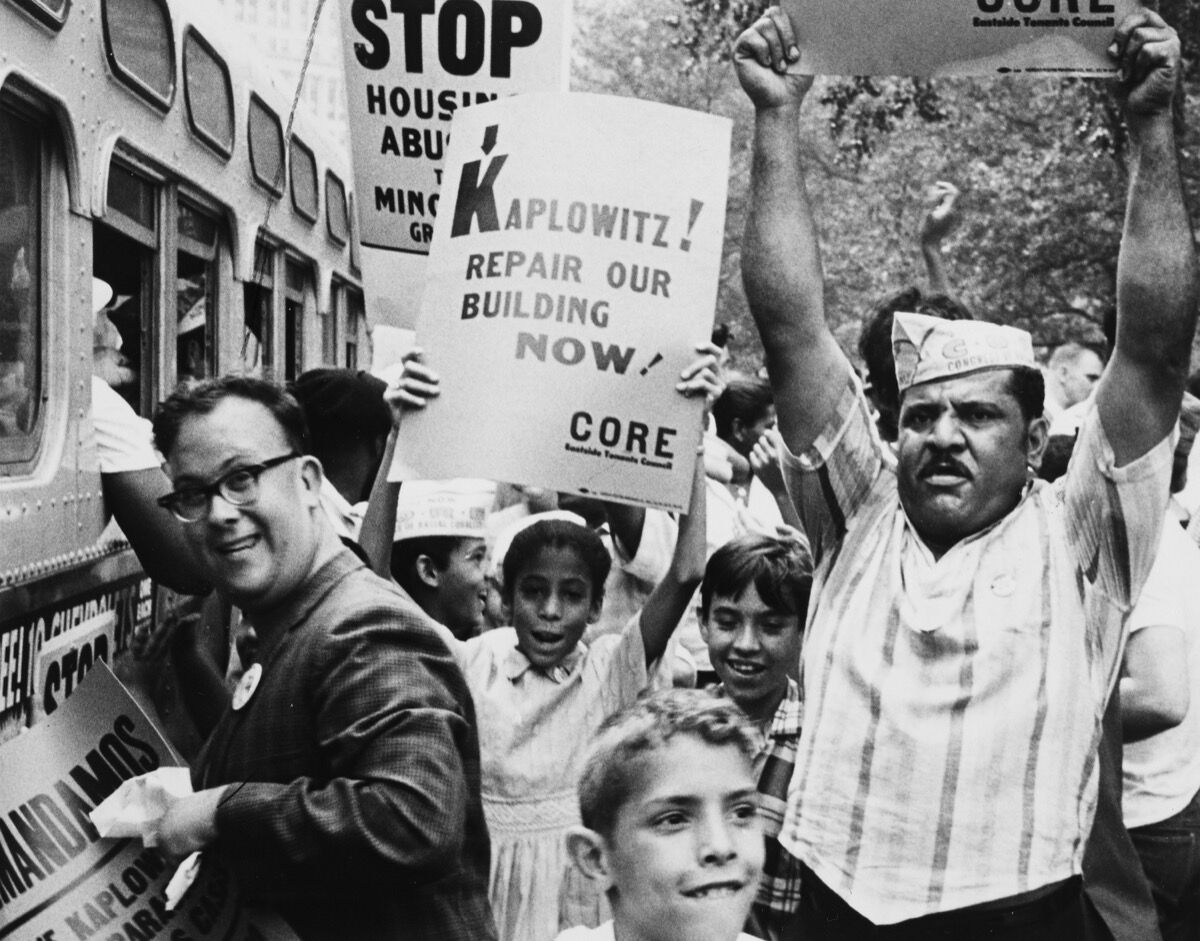 The four photographs look like voyeuristic scenes out of Alfred Hitchcock’s Rear Window, imbuing a relatively banal scene with the aura of a mysterious plot. We see two casually dressed men approach a third figure, standing in front of a nondescript building with an unlit pipe in his mouth. They hand him what looks like a book of matches, which he accepts, appearing to strike one before returning the pack. The trio is entirely unaware of the photographer—a police officer—snapping their rendezvous from a short distance away. We’re left not knowing the identities of any of the men, or indeed why they were worthy of police attention in the first place.
This group of photographs was never intended to hang in a gallery. They’re surveillance images, part of a curated array of dozens of similar New York City Police Department-produced photos on view in “Unlikely Historians: Materials collected by NYPD surveillance teams, 1960–1975,” which runs through February 28th at the New York City Municipal Archives. (Two staffers from the institution curated the selections.) It’s a unique opportunity to see how photographs once meant to act as evidence reveal the city’s history, however accidentally.
Taken as a whole, the exhibition provides an intimate glimpse of a politically charged, turbulent decade-and-a-half. Some photos appear similar to those taken by activists and photojournalists of the time—except for the crucial difference that the NYPD’s surveillance shots were taken from the other side of the police barricades. These camera-wielding cops were documenting not for posterity or the papers, but for prosecutions. 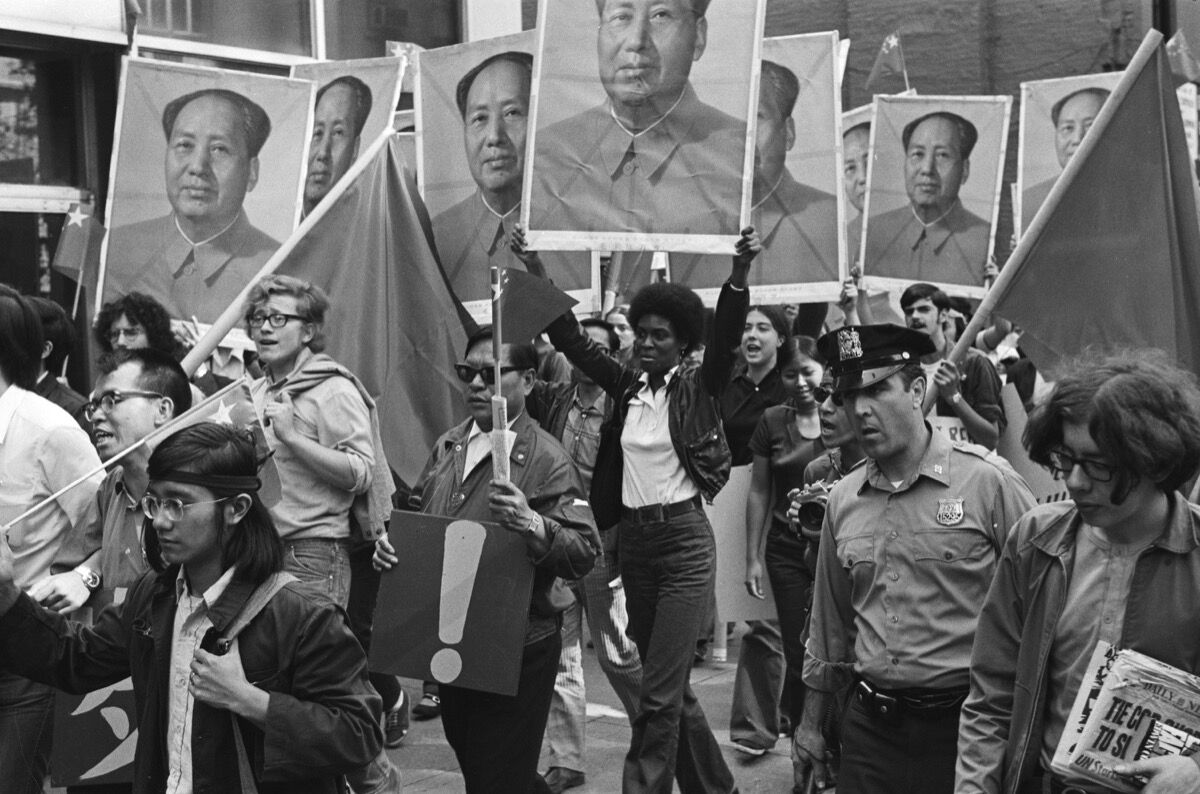 It’s the breadth of police surveillance itself, rather than the contents of any specific image here, which is the most revealing. NYPD police surveillance as we currently know it dates back to the early 20th century, long before body cameras and bulk metadata gathering. The evolution of the surveillance team’s taxonomy through the years reveals the groups that most interested authorities at any given time. The unit that began as the “Italian squad” in 1904, became the “radical squad” in the 1920s, shifting to the “alien squad” of the 1930s. The trend continued up through to the near present, with the NYPD shuttering the “demographics unit” (which illegally surveilled Muslims) in 2014.
“Unlikely Historians” focuses on the activity of officers working under the more opaquely named Bureau of Special Services and Investigations (BOSSI), launched in 1946, later renamed the Special Services Division. Officers documented “anyone who deviated from some place in the [political] center that was defined by the NYPD,” as Commissioner Pauline Toole put it in a recent conversation.
Police did indeed surveil right-leaning groups, like the National Renaissance Party, represented in the exhibition by an image of its members wearing quasi-Nazi garb while defending the apartheid state of Rhodesia. But the lens of NYPD skewed leftwards, with its “main focus” on “civil rights, anti-war, and feminist protestors,” according to a wall text. Of particular focus was the Black Panther Party and likeminded groups. The NYPD turned its cameras on a wide range of subjects; everything from a nonchalant member of the Black Liberation Army smoking a cigarette and walking with a newspaper to a cache of weapons seized during a police raid. 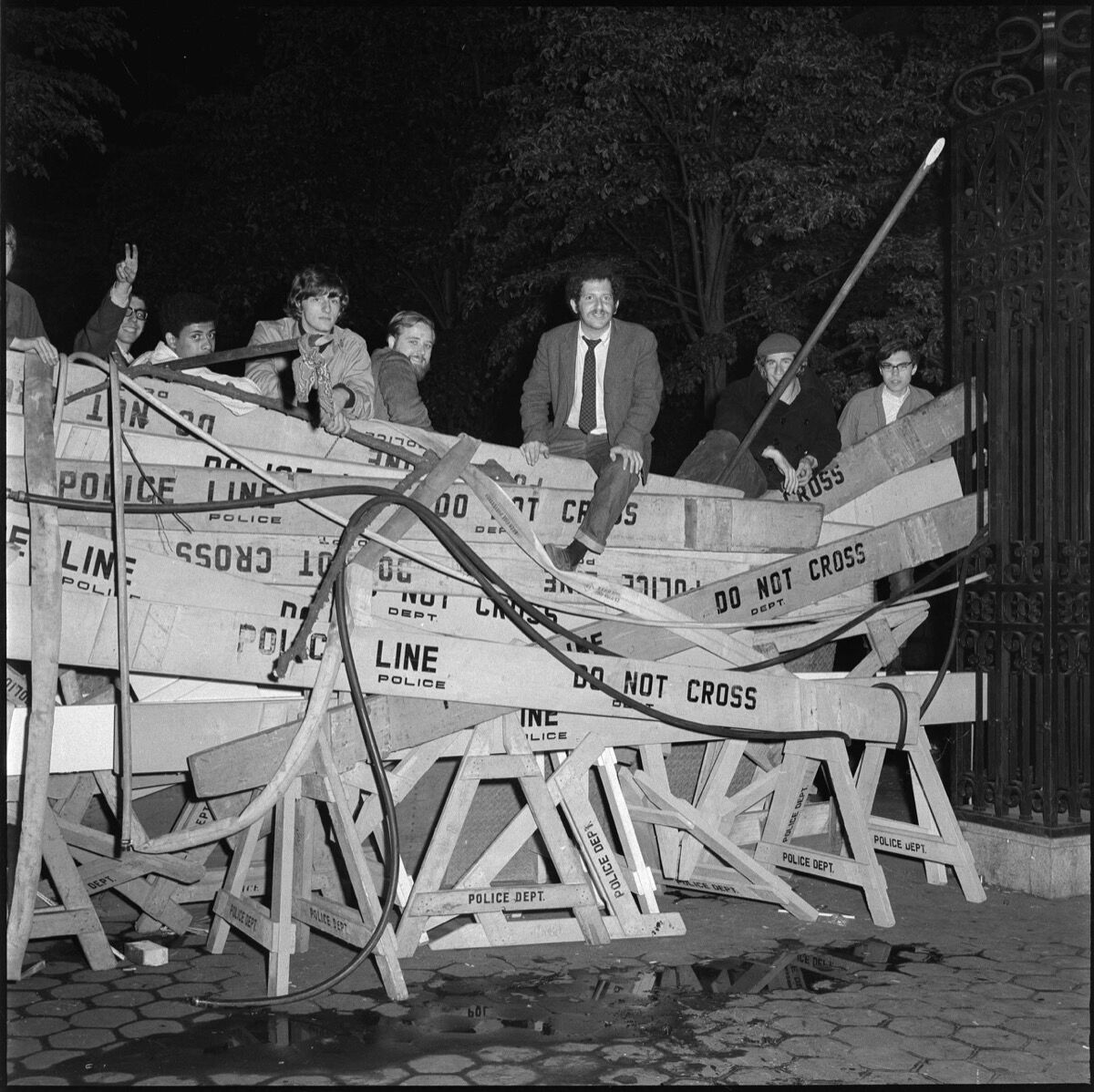 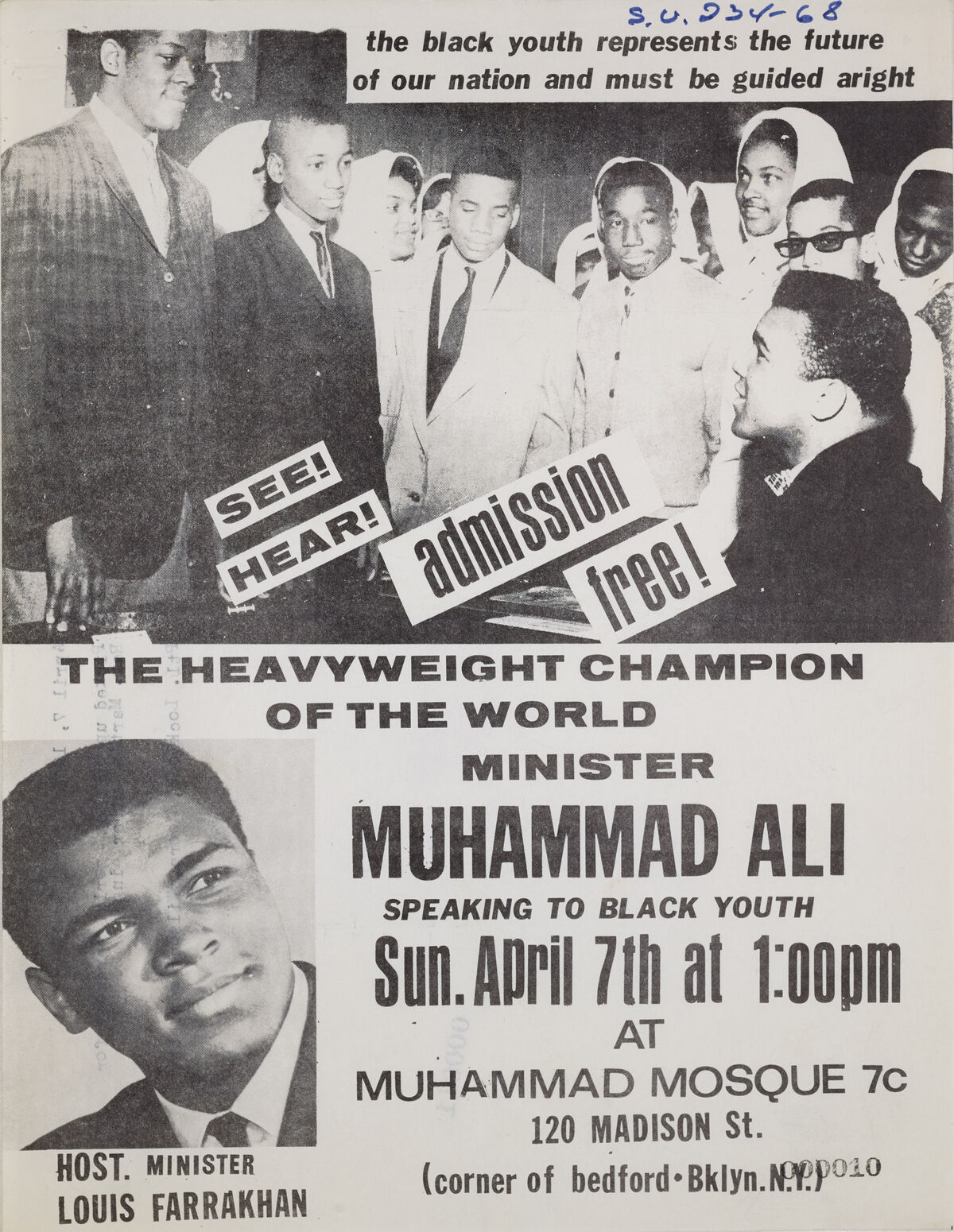 Advertisement
Photographs of demonstrations around housing, urban development, and inequality are also on view. One image shows activists who ultimately scuttled the planned Columbia University gym in Morningside Park—attacked over its discriminatory, segregated entrances for Harlem residents and Columbia students—straddling police barricades.
Political groups contested every inch of New York during the 1960s and ’70s. They made their voices heard on topics from racism to the very quality of the air. Even the first-ever Earth Day was carefully watched by police video cameras. This and other documentary videos included in the exhibit are particularly interesting. One shows the camera zooming in on random attendees of a Malcolm X speech. If taken out of context, the shots provide a remarkable glimpse at the average people, often overlooked, who took part in political activism—but, of course, the NYPD’s intent was a bit more insidious than simply capturing the spirit of the day.
Ultimately, the widespread culture of NYPD surveillance raised legal flags. Some of the materials on view in “Unlikely Historians” were released following the 1985 settlement of Handschu v. Special Services Division, a class-action lawsuit brought against the NYPD which revealed the extent to which they gathered information on political groups prior to any actual crime. The case resulted in a 1985 consent decree preventing the police from spying on political groups unless they had specific evidence they committed, or were intending to commit, a crime. 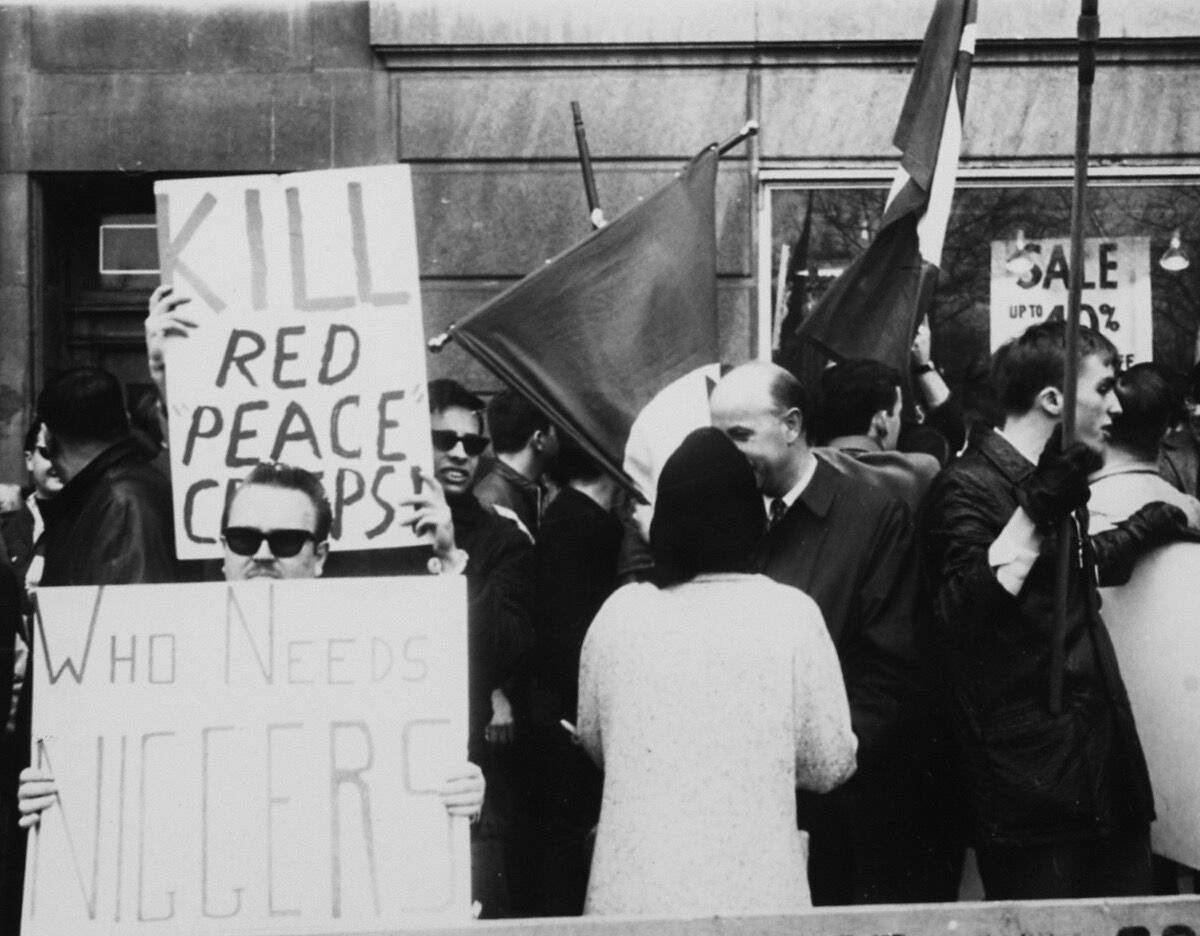 In the aftermath of September 11th, that decree was drastically scaled back, with police now able to surveil a group if they suspect the possibility of criminal activity. And of course, technology has proceeded apace, including ever more intrusive surveillance techniques (with some of the latest incorporating artificial-intelligence to thwart protesters who attempt to disguise their identities).
Amid the recent explosion of protests, from neo-Nazi rallies to the left’s anti-Trump mobilization, the divisions of the 1960s and ’70s don’t seem all that distant. One wonders what a future version of “Unlikely Historians” would reveal about this current political moment (there would definitely be a lot more memes). But these days, police are “watching” demonstrators in different ways, tracking them through social media using information meant for advertisers. An exhibition of police surveillance today might include more metadata than documentary photographs.
Dry and utilitarian, these surveillance photographs aren’t works of art meant for the white cube. But that’s what makes them all the more interesting. Unlike artists, who create work knowing it will be seen by an audience, the NYPD made these images thinking no one was watching. Seeing them provides a rare, if incomplete, glimpse inside a secretive organization.
Isaac Kaplan is an Associate Editor at Artsy.
Related Stories