How May 1968 in Paris Changed the Way We View Protests 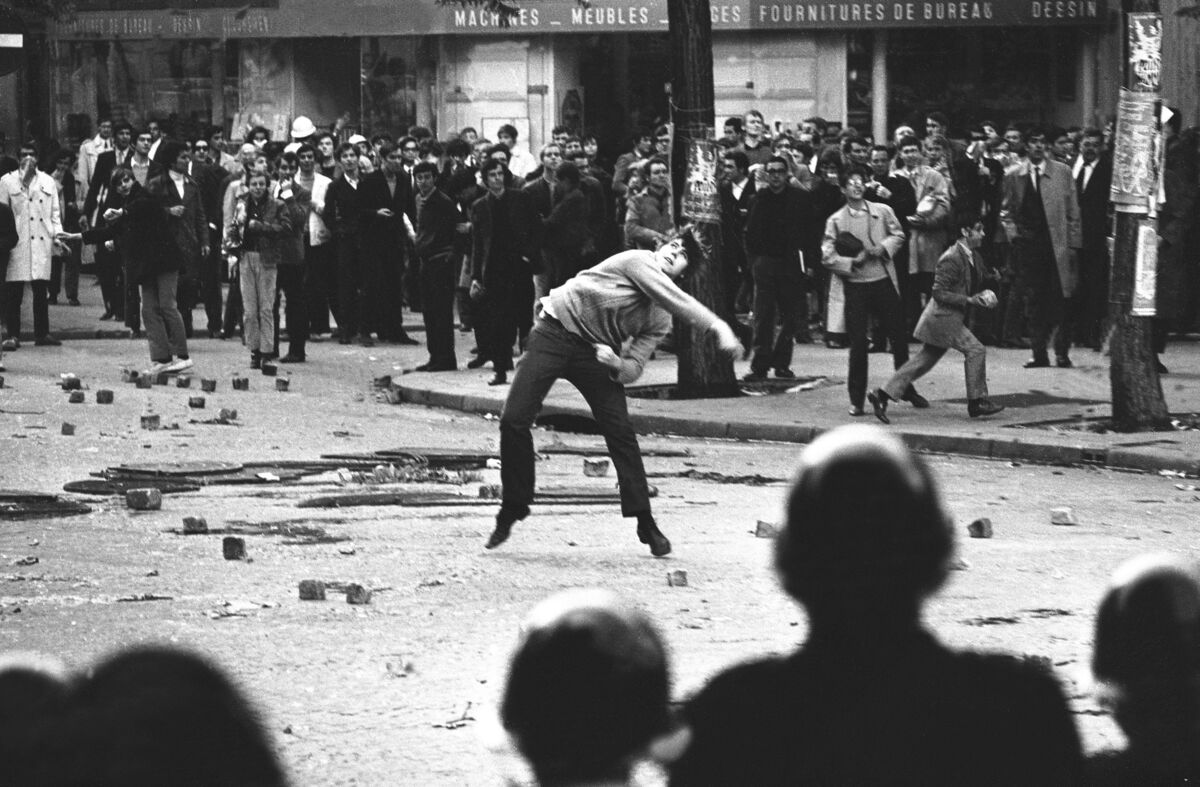 Student uprising in Paris, May 1968. Photo by Keystone-France/Gamma-Keystone via Getty Images.

It’s a hot Saturday evening in May, and the Latin Quarter feels restful, bordering on soporific. This is picture-postcard Paris, a district of café terrasses spilling out onto steep, yellow-hued streets, with medieval seminaries and specialist bookshops catering to students from the nearby Sorbonne University—groups of whom perch on the curbs, studying for their summer exams. The closest you get to civil disturbance comes courtesy of the tourists jostling for photo opportunities outside the Pantheon. Yet 50 years ago this month, these streets were the stage of one of the most dramatic confrontations to have taken place in western Europe since 1945.
In May 1968, thousands of students marched on the area and occupied the university campus, sparking a direct clash with the forces of law. By the middle of the month, this scenic corner of the French capital had been transformed into something resembling a war zone. Where now the smells of upmarket bistrot cuisine dominate the air, the Latin Quarter of May 1968 saw plumes of smoke rising from vehicles that had been set on fire, intermingling with clouds of tear gas, making it difficult to breathe. Students yanked cobblestones from the roads, hurling them at the ranks of riot police charging down the Rue de Gay-Lussac. On street corners, they struck up makeshift barricades hastily assembled from pieces of furniture, burnt-out cars, cobbles, and storm drain grates. Political slogans were splashed onto every wall in sight, their messages ranging from the crude to the absurd: “SOYEZ RÉALISTES: DEMANDEZ L’IMPOSSIBLE” (“BE REALISTIC: DEMAND THE IMPOSSIBLE”), commanded one. Quite what “the impossible” was, few were sure.
Indeed, it’s difficult to explain exactly why the students of Paris took to the streets in 1968, less still what they aimed to achieve. With the benefit of a half-century of hindsight, the protests resemble an inarticulate howl of generational anguish. Thirty years after the end of World War II, France was still a deeply conservative country smarting from humiliating defeats in bloody and pointless colonial conflicts in Indochina and Algeria. “France cannot be France without greatness,” the country’s war-hero president Charles de Gaulle had written in the 1950s, before taking office. Even now that it had lost its global power, he had a plan to restore its pride. Under de Gaulle’s watch, the state embraced a drive toward market prosperity whereby the French citizen would become a model consumer, dutifully contributing to the growth of the economy, and thus the spiritual health of the nation. That, at least, was the theory.

Needless to say, not everyone approved. Unemployment was high, and for a (typically middle-class) student of 1968, entering the workforce seemed less than an edifying prospect: The average graduate could consider themselves fortunate to find a job as a commercial functionary or low-level public servant. You could hardly get further from the message of the era’s pop culture; fun, fun, fun this wasn’t. Popular sociologists and philosophers like Claude Lévi-Strauss, Michel Foucault, and Roland Barthes picked holes in the intellectual case for the status quo, unravelling its “mythologies” and rubbishing the received idea that market capitalism represented an unbending road to progress.
Meanwhile, the Vietnam War continued to escalate, and while France was not militarily involved in the conflict, many young people took it as proof that Western ideology was just as duplicitous and morally bankrupt as any other. Yet America wasn’t all bad in the eyes of the European leftists: Recent protests against the war at the University of California, Berkeley, had shown that direct action against the authorities could be presented as a media sensation. The Paris rioters would exploit this to the fullest.
These were the conditions under which, in March 1968, leftist students at Nanterre University, in the dreary northwestern suburbs of Paris, occupied the campus’s administrative buildings. The authorities attempted first to reason with the protesters, and then tried to regain control by force, but their efforts proved inept. On May 2nd, the college’s dean took the decision to suspend classes at Nanterre, temporarily closing it down. The attendant media coverage captured France’s imagination—and set light to the social Molotov cocktail that lay ahead. 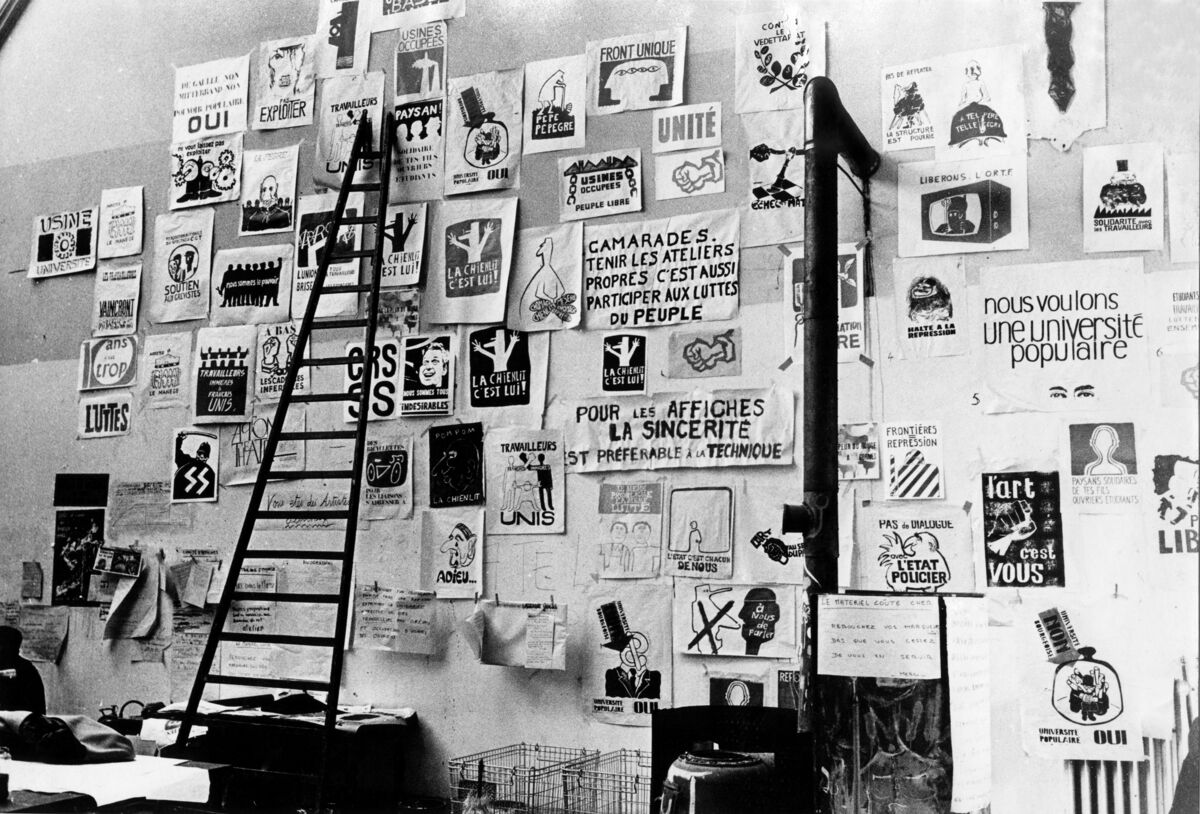 Advertisement
The next day, Nanterre students joined up with their inner-city peers and took control of the Sorbonne. Soon enough, things got violent. Police attempts to remove the demonstrators were heavy-handed, and much to the embarrassment of the authorities, this was captured by the press.
Gilles Caron
, a photojournalist who had chronicled both the Vietnam War and the Six Day War in Israel, provided perhaps the defining image of the riots: a black-and-white photograph of a young man falling to the ground, having, we presume, slipped on the curb while running. Bar the (unseen) photographer himself, the only other presence on the street is a helmeted riot cop bending back to beat the fallen man with his truncheon.
Images like this gave some elements of French society cause to sympathize with the demonstrators, and ended up adding to their ranks. Out of conviction, curiosity, or plain opportunism, thousands of young people flocked to the Latin Quarter to join in. Photojournalism contributed to the mythology in less-explicit senses, too. As an exhibition at Paris’s Bibliotheque Nationale (on view through August 26th) explains, newspapers were hungry for images that captured an “iconic” quality. The photogenic students, eager to feel they were participating in the making of history, were all too willing to oblige. One picture by photographer Jean-Pierre Rey shows a young woman at a demonstration. She’s a dead ringer for Jean Seberg in Jean-Luc Godard’s Breathless, holding a Viet Cong flag above her head in apparent reference to
Eugène Delacroix
’s Liberty Leading the People (1830).
The students themselves were no slouches when it came to creating visually striking iconography. At the height of the protests, students from the École des Beaux-Arts—France’s most prestigious art college—occupied the institution and began churning out inspired posters that combined graphics nodding to comic books, advertising, and contemporary art, emblazoned with simplistic but memorable political slogans. Printed by the thousands, they were disseminated across France, eventually gaining popular currency across the world. One of the most widely circulated showed General de Gaulle’s in silhouette, gagging a student with his hand and uttering the phrase: “Be young and shut up.” Another depicted an elegantly dressed young woman launching a Parisian cobblestone towards an unseen enemy: “Beauty is in the streets,” reads the caption. Photo by Keystone-France/Gamma-Rapho via Getty Images.

The protestors’ idea of beauty was evidently an appealing one. Copycat incidents at other universities across the country followed, and on May 13th, workers in factories across Paris added their voices to the protests. A general strike was declared, and by the final week of the month, some 22 percent of France’s workforce—around 8 million people—had joined in. Almost by accident, the students had brought the country to a near-total standstill. For a brief moment, it seriously seemed as though France was on the brink of another revolution.
There is no question that the events of May 1968 changed France forever, but perhaps not in the way the students expected. Politically, the riots had little immediate effect. Though President de Gaulle was spooked enough to order an emergency election in June, the result saw his party returning to power stronger than ever. Meanwhile, the workers returned to their jobs and the momentum of the protest movement collapsed as quickly as it had built up.
Yet while the students might not have overthrown the government, they ushered in what can only be described as a cultural revolution. Their ideas, previously seen as unrealistically radical, became topics of serious discussion in the press. France’s greying political elites started to acknowledge that young people might actually have something worth saying. Individualism, a term that was anathema to de Gaulle’s quasi-authoritarian notions of state collectivity, was suddenly embraced. Almost overnight, French society became unrecognizably liberal.
The artistic repercussions of the riots reverberated yet further, inspiring classics as diverse as the Rolling Stones’s tune “Street Fighting Man” (1968), Julian Barnes’s debut novel Metroland (1980),
Joan Miró
’s painting May 1968 (1968–73), and François Truffaut’s film Baisers Volés (1968). Much later, and somewhat less auspiciously, they also provided the backdrop to Bernardo Bertolucci’s (terrible) 2003 movie The Dreamers. Yet the most pervasive long-term impact on the arts has been less direct. Looking around at the recent exhibition of the posters created by the Beaux-Arts students held at the institution itself, you can’t help but wonder whether the likes of
Banksy
,
Barbara Kruger
, or
Shepard Fairey
would have arrived at their signature styles were it not for the precedent set in 1968. Advertising, too, has taken its cue from the protests: Most recently, Gucci has launched a campaign based on the imagery of the university occupations.
Since 1978, the protests have been commemorated and editorialized every time another 10-year anniversary rolls round. This year, however, has proved to be particularly contentious in France. Government moves toward cutting the public sector have sparked considerable social unrest—and once again, the students have been back on strike. It’s a conscious but dismissive echo of their forebears; at Nanterre University, where the troubles of 1968 started, there is another exhibition devoted to the events of 50 years ago. Students have defaced posters advertising it. “Commemoration of hypocrites!” declares one scrawl, referring to the fact that some of the leading lights of the original protests now occupy important roles in public life. “Macron, we’re going to hang you!” states another, rather less ambiguous tag.
However referential it becomes, the spirit of ’68 lives on. When I decided to quit the Left Bank and head home on Saturday, I turned a corner onto the Rue Jacques and encountered no less than 17 police vans on full alert. Before I had reached the end of the street, eight more vehicles bearing riot police livery had joined their number. For better or worse, great efforts are being made to stop history repeating itself.
Digby Warde-Aldam
Related Stories