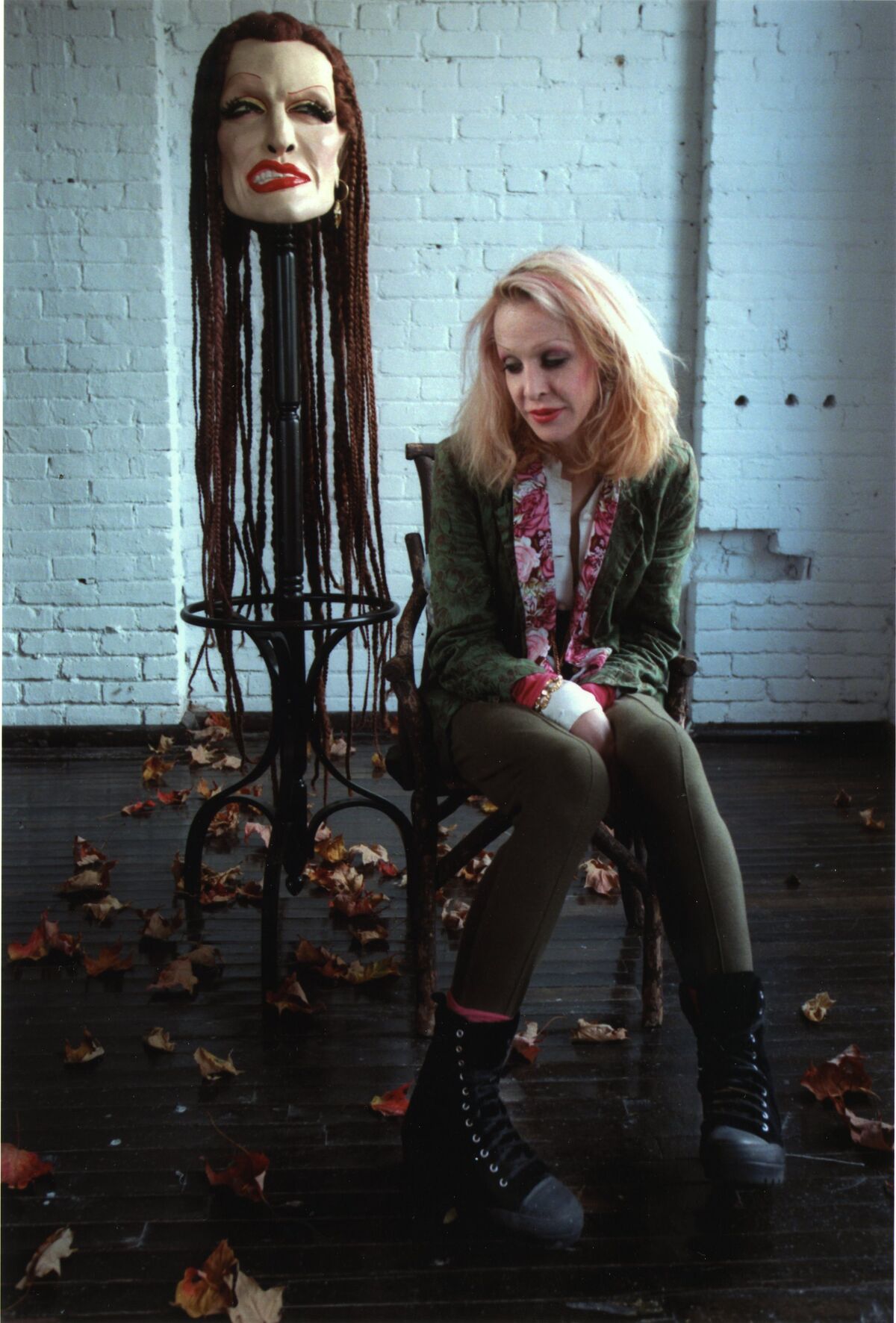 Portrait of Greer Lankton. Photo by Annie O'Neil. Courtesy of the Mattress Factory.

Abjection and glamour collide in
Greer Lankton
’s hand-sewn dolls, photographs, and illustrations. Death meets fashion in the late artist’s doll of storied Vogue editor Diana Vreeland: Lankton composed a photograph in which the figurine, in a chic black outfit and red lipstick, smokes a cigarette in front of a tombstone that reads “MRS VREELAND HAS DIED.” Indeed, many of Lankton’s works resurrect such glittering celebrities, but evoke the lanky, grotesque characters of an
Otto Dix
painting. The artist’s incarnation of Jackie Kennedy, for example, is a voluptuously coiffed doll in the infamous pink suit and pillbox cap the first lady wore the day her husband was shot.
Looking through Lankton’s singular artistic output is a deeply affecting, if morbid, experience. Yet designer Paul Monroe, whom she married in 1987, also remembers her as a “happy-go-lucky individual filled with giggles and romance.” As he recently told Artsy by phone, “I don’t like when she comes across as gloomy.” Monroe is now living in actress Lena Dunham’s guesthouse in Los Angeles, at work on a book and HBO documentary about Lankton, who died in 1996 (Dunham is a producer on the film).
But the artist’s legacy is tenuous. Monroe offers one perspective on Lankton’s story, while the Mattress Factory in Pittsburgh—an institution that currently holds much of her archives—promotes another. In death, Lankton has become a kind of funhouse doll herself; her public perception is ripe for manipulation, susceptible to the motivations and whims of various parties.
That’s not to say that there isn’t agreement on some details of Lankton’s life. She was born Greg Lankton in Flint, Michigan, in 1958, to a religious household (her father was a Presbyterian minister). She enjoyed playing with dolls and gravitated towards girls’ clothing from a young age, but Lankton’s parents, Monroe said, prohibited the activity as inappropriate for a little boy, so she resorted to making her own puppets from pipe cleaners and socks. While they were never comfortable with their daughter’s self-presentation, Lankton’s parents did, however, support her early artistic ambitions. With their help, she entered and won minor creative contests around the Midwest.
In 1979, while studying at Brooklyn’s Pratt Institute, Lankton underwent a sex change operation. Monroe believes her mother forced her into the operation because she felt a trans daughter was preferable to a gay son. A very different story about the event, though, is circulating in the media: Lankton was the one who wanted the operation, and her father helped raise funds by asking his congregation for donations. Lankton herself was vague on the subject; when a publication asked her how long she’d been transsexual, she answered, “I guess since I was born, but I’ve been a woman since I was 20.” 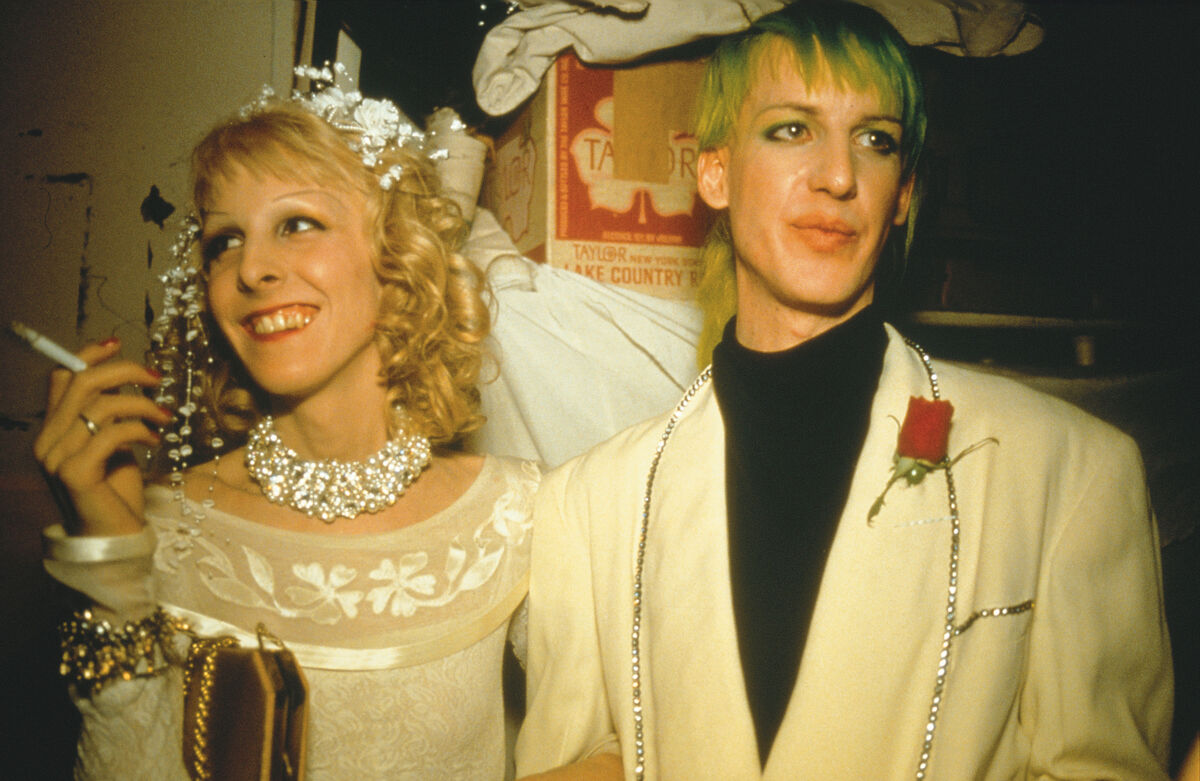 Whatever the truth may be, Lankton sublimated the horrors of the surgery—which was risky and experimental at the time—and its aftermath into her dolls. Her figures from the early 1980s, some presented in cages, are particularly gaunt and chilling. Several explicitly hermaphroditic figurines, such as Albino Hermaphrodite in a Baby Carriage (1984), probe conceptions of gender. The doll, which Lankton situated within a tangle of gray thread in a black stroller, is pale, with long hair and a penis. Another figurine has clearly suffered violence: She’s scarred, ragged, and bald, with binding around her lower legs.
The dolls’ skeletal frames, with their protruding ribs and sharply exaggerated features, make them appear less like humans and more like the undead, and also reflect Lankton’s own struggles with anorexia. But when Lankton’s figures aren’t excessively thin, they are notably heavy, with skin pooling in layers at the midsection. Such representations reveal Lankton’s haunting perspective on the indignities of having a body. Yet Hilton Als views Lankton’s art as her saving grace after significant trauma. As he once wrote, “No artist is down on her luck when she has her art. It’s what Greer fed on, even when she ate no other food at all. Her dolls were starved for our attention.”
Despite her struggles with her body and gender identity, in downtown Manhattan, Lankton finally found a community where she fit in. She attended the drug-fueled parties at Mudd Club, one of the city’s major nightlife destinations where queer underground artists reigned (it was a hotspot, in particular, for
Andy Warhol
’s circle). Her dolls of drag star Divine and transsexual downtown icons Candy Darling and Teri Toye reflect her love and admiration for this community. She also met photographers
Nan Goldin
and
Peter Hujar
, eventually modeling for both of them. In 1983, Hujar introduced Lankton to Monroe. They moved in together and quickly became inseparable, spending much of their time at Monroe’s East 7th Street boutique, Einstein’s, where they displayed Lankton’s dolls in the window.
Around this time, Lankton also began exhibiting her work at Civilian Warfare, a gallery in Alphabet City that showed subversive, up-and-coming artists like
David Wojnarowicz
. Though she’d quickly gained institutional recognition (MoMA PS1 exhibited her work in 1981), Lankton’s dolls didn’t immediately appeal to collectors. Her gallerist, Monroe said, was the one who encouraged her to photograph her dolls, and the commercially friendly images helped Lankton earn money from her art.
Lankton and Monroe married in 1987. What happened thereafter is contested: Curator and writer Julia Morton has reported that Lankton and Monroe became “abusive drug addicts, her career had tanked, and they’d divorced.” According to the Mattress Factory, the divorce was finalized around 1993. But Monroe himself insists that the pair never divorced and that Lankton’s mother forged divorce papers.
Lankton moved to Chicago around this time, where her parents were then living, for a fresh start and to focus on her ill health. Little is known about her life in Chicago, though she did exhibit in the Whitney and Venice biennials in 1995, which increased her work’s visibility. In 1996, the Mattress Factory invited Lankton to create a project there after the curators visited her Midwestern studio. “They were both amazed and appalled by what they found. Her apartment was a creative disaster site,” Morton wrote. The Mattress Factory decided to commission Lankton to recreate an idealized replica of her studio. 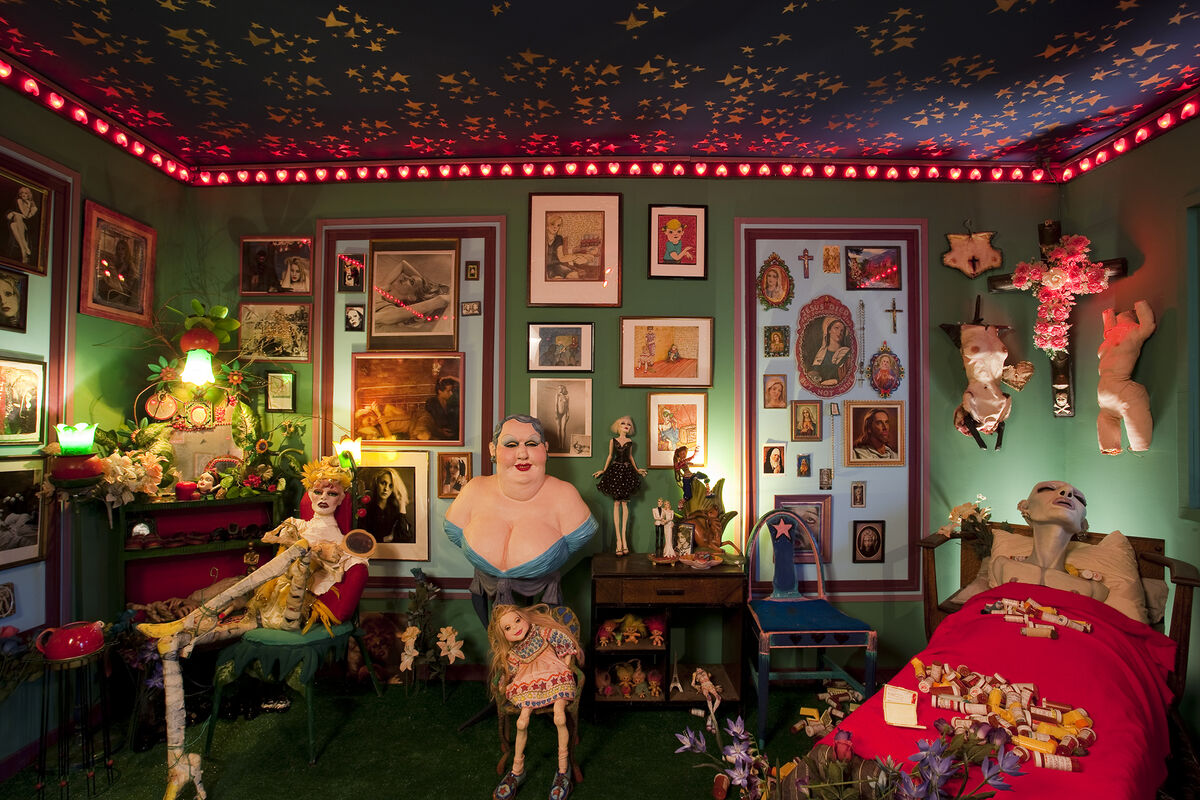 Installation view of Greer Lankton, “It's all about ME, Not You,” 2009. Courtesy of the Mattress Factory.

Advertisement
“It’s all about ME, Not You,” which the museum put on permanent display in 2009, takes the form of an astroturf-floored bedroom with painted green walls and star embellishments inscribed by a ring of neon hearts on the ceiling overhead. Portraits and crucifixes clutter the walls, while dolls occupy chairs and a standing position by a window. One ghostly white doll head emerges from a red-blanketed bed littered with pill bottles and faux flowers. The room simultaneously exudes decadence and illness, obsessive maximalism and eerie stillness.
Shortly after the Mattress Factory flew her to Pittsburgh to oversee the installation, Lankton died of an overdose (Monroe was adamant that she’d been taking a dangerous cocktail of pills to deal with the residual pain from her unwanted surgery). The messy fate of the artist’s archive has become a cautionary example of the chaos that can ensue after a creative spirit is gone. Monroe claimed that after Lankton’s death, her family threw all her old possessions—“artwork, her wedding dress, diaries, photographs”—in a dumpster. “Her house was very close to a hair salon where she hung out,” Monroe told Artsy. Someone found out about the disposal efforts, and “30 people pulled out as much as they could,” he said.
The Mattress Factory, meanwhile, maintains that Lankton’s family did nothing untoward. Curator Margery King offered her own version of the events. In the process of moving in 2014, the family found objects in Lankton’s room that they promptly bequeathed to the museum. As she recently told Artsy via phone, the family “approached the Mattress Factory about having a Greer archive. The Mattress Factory was happy to do that. Some things the family wanted to keep, they kept. The rest of it came, and the archivist began to organize everything.” Right now, the Mattress Factory remains the best place in the world to learn about Lankton and view her work. 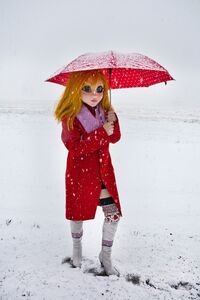 2 Images
View Slideshow
Monroe, for his part, has been amassing Lankton’s work on his own, building up what he calls the Greer Lankton Archives Museum (GLAM), buying up works himself and incorporating objects that other Lankton collectors generously send back to him. Since he moved into Dunham’s guesthouse in 2016, he’s been using his own former home, across from the Los Angeles County Museum of Art, to house the art.
So who, ultimately, will determine Lankton’s legacy? Monroe is a skilled raconteur, and he’s already captivated a very high-profile audience. He calls Dunham his “best friend” and once collaborated on a music video with her ex-boyfriend, singer Jack Antonoff. Monroe stuck by both Dunham and Lankton throughout their ongoing illnesses, even when other friends lost patience. “Lena has that same kind of thing where you look at her and you don’t see her bleeding, but her insides are destroying her,” he said. (Lankton’s work, of course, also resonates with the doll-filled photographs that have made Dunham’s artist mother,
Laurie Simmons
, famous.)
3 Images
View Slideshow 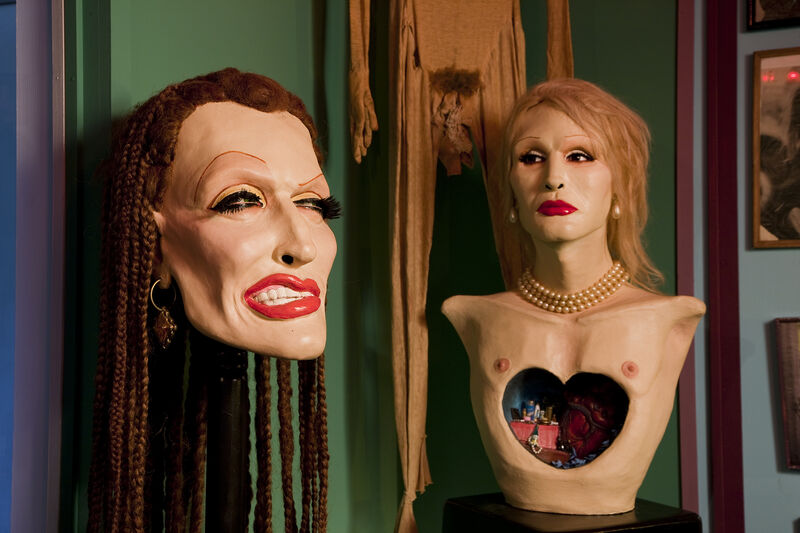 Monroe has just organized a celebration of Lankton’s life, tied to Valentine’s Day. This past Thursday, at LACMA, he and Dunham screened Lankton’s short films and invited attendees to dress up like her dolls. Actress Jemima Kirke served as one of the judges for the costume contest. “I wish I’d gotten to watch Greer work,” Kirke recently wrote Artsy. “Making those dolls seems like it was a necessary part of her existence. Like procreation or something.…Her dolls have such a palpable energy, one feels as if they’re sitting in the room with real a person. And, just like a person, they would not exist without their mother.”
Once a peripheral figure of a major moment in New York art history, Lankton now has the celebrity backing that could make her a household name. Like so many East Village characters before her, the misfit may be on the verge of going mainstream. Though the battle over her narrative still rages, it isn’t necessarily a surprise. As Monroe said, “Everything surrounding Greer is kind of bizarre.”
Alina Cohen
Corrections: A previous version of this article stated that Paul Monroe said Greer Lankton’s mother forced him to sign divorce papers. Monroe said that Mrs. Lankton forged his signature. Additionally, the text stated that Paul Monroe is Greer Lankton’s “widower.” The details of their marriage and divorce, however, are still contested. The text has been updated to reflect this change.
Related Stories

Inside the “Phallus Palace,” Charles Leslie’s Trove of Queer Art

Why Artists Are Using Dolls to Create Feminist Art 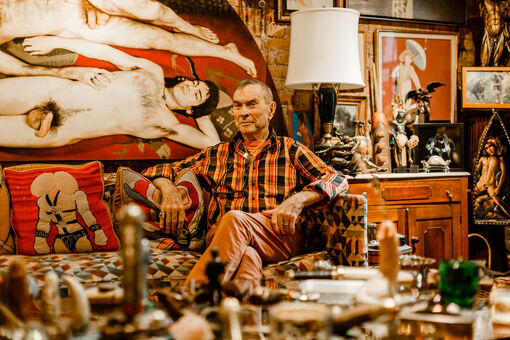 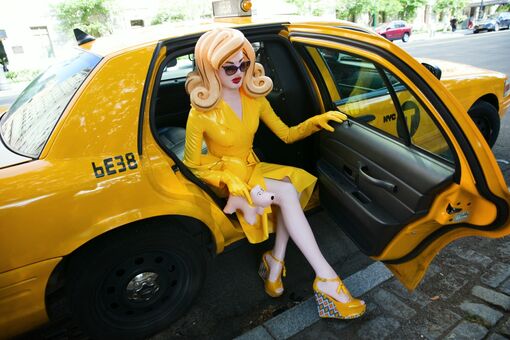 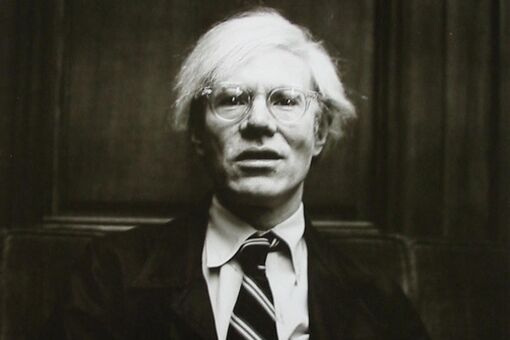