It’s Legal to Burn the American Flag. This Artist Helped Make It A Form of Free Speech. 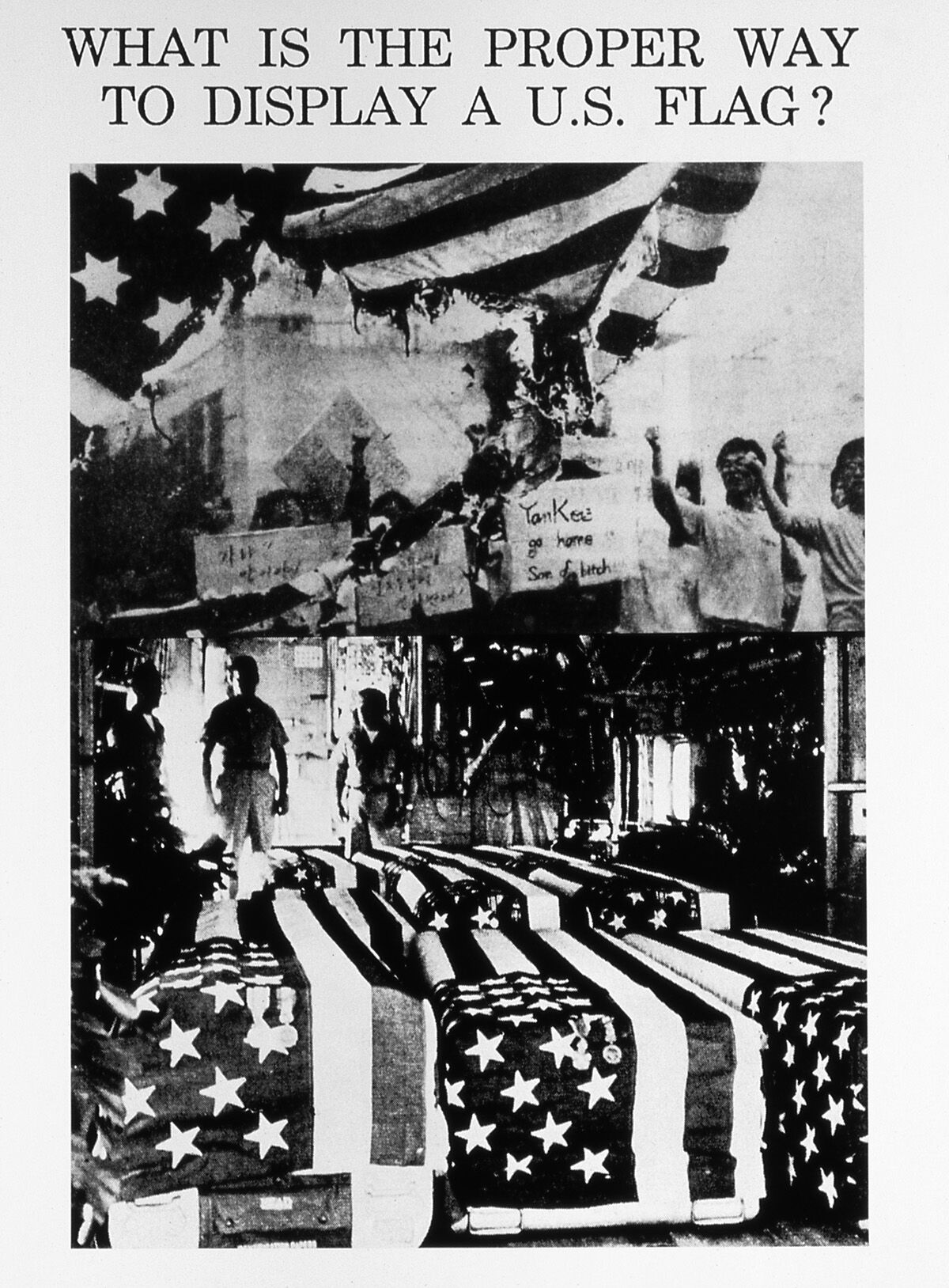 Detail of Dread Scott, What is the Proper Way to Display a U.S. Flag?, 1988. Courtesy of the artist. 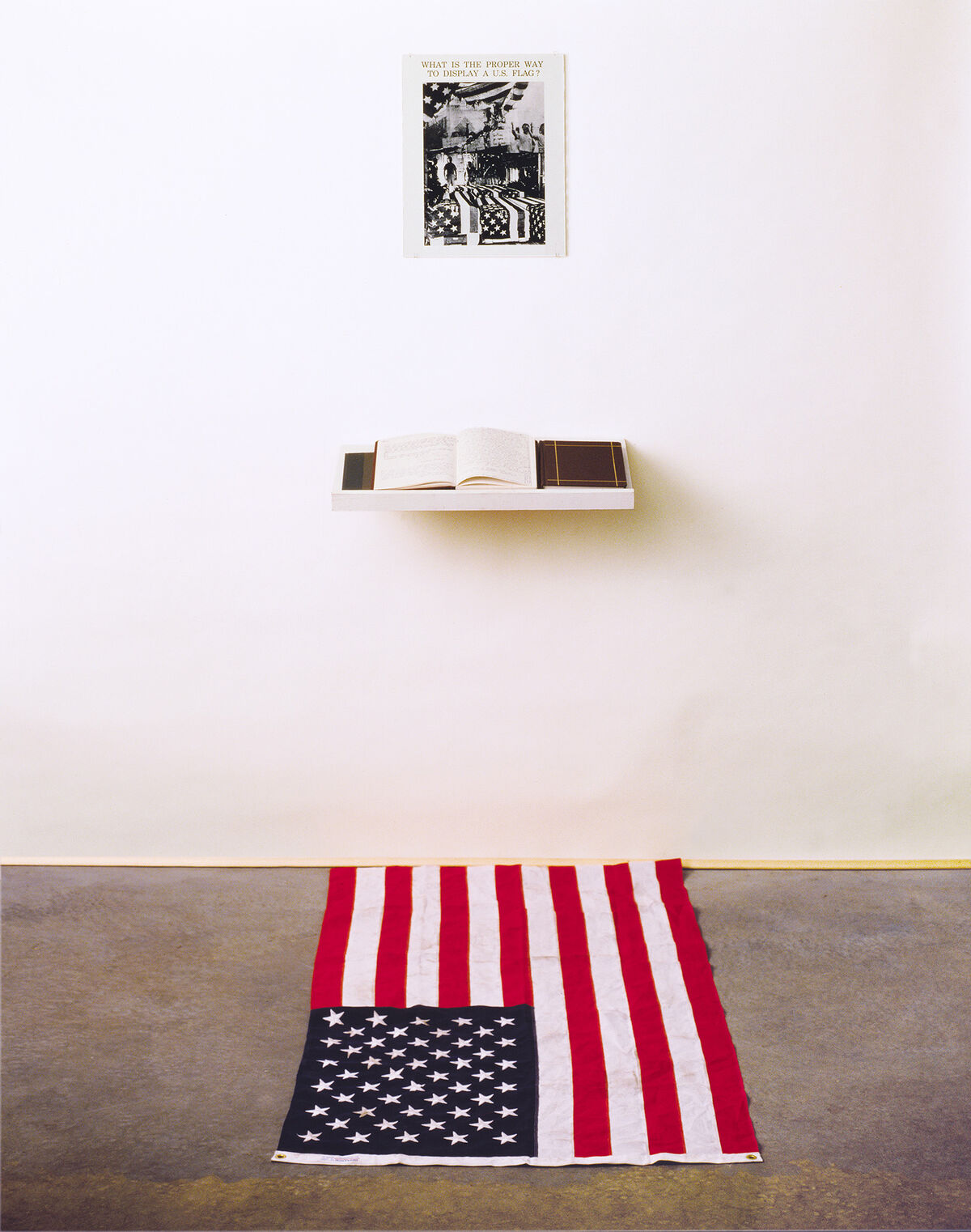 Installation view of Dread Scott, What is the Proper Way to Display a U.S. Flag?, 1988. Courtesy of the artist.

Patriotic symbols, and those who protest them, are at the forefront of national news. President Donald J. Trump has verbally attacked Colin Kaepernick and other NFL players who refuse to stand for the national anthem at football games. In November 2016, Trump tweeted: “Nobody should be allowed to burn the American flag—if they do, there must be consequences—perhaps loss of citizenship or year in jail!” Politicians recently ordered the removal of
Josephine Meckseper
’s artfully stained flag from an exhibition at the University of Kansas. A simple piece of cloth can elicit very strong feelings.
“Powerful forces are saying: ‘America, love it or leave it,’” said artist
Dread Scott
in a recent conversation with Artsy. “It’s a climate that’s frankly far worse than in the 1980s. There’s a vitriolic section of society trying to make patriotism compulsory.”
Back in the late 1980s, Scott was already forewarning the country about privileging symbolic objects over artistic freedoms. In 1989, as a 23-year-old student, he exhibited an artwork called What is the Proper Way to Display a U.S. Flag? (1988) at the School of the Art Institute of Chicago (SAIC). It featured an American flag placed on the gallery’s floor.
Scott also provided a book in which he urged visitors to write their reactions to the artwork. Provocatively, they could stand on the flag as they wrote. Above the ledger, he hung a photomontage that depicted the flag-covered coffins of American troops and a group of South Korean students burning the U.S. flag. 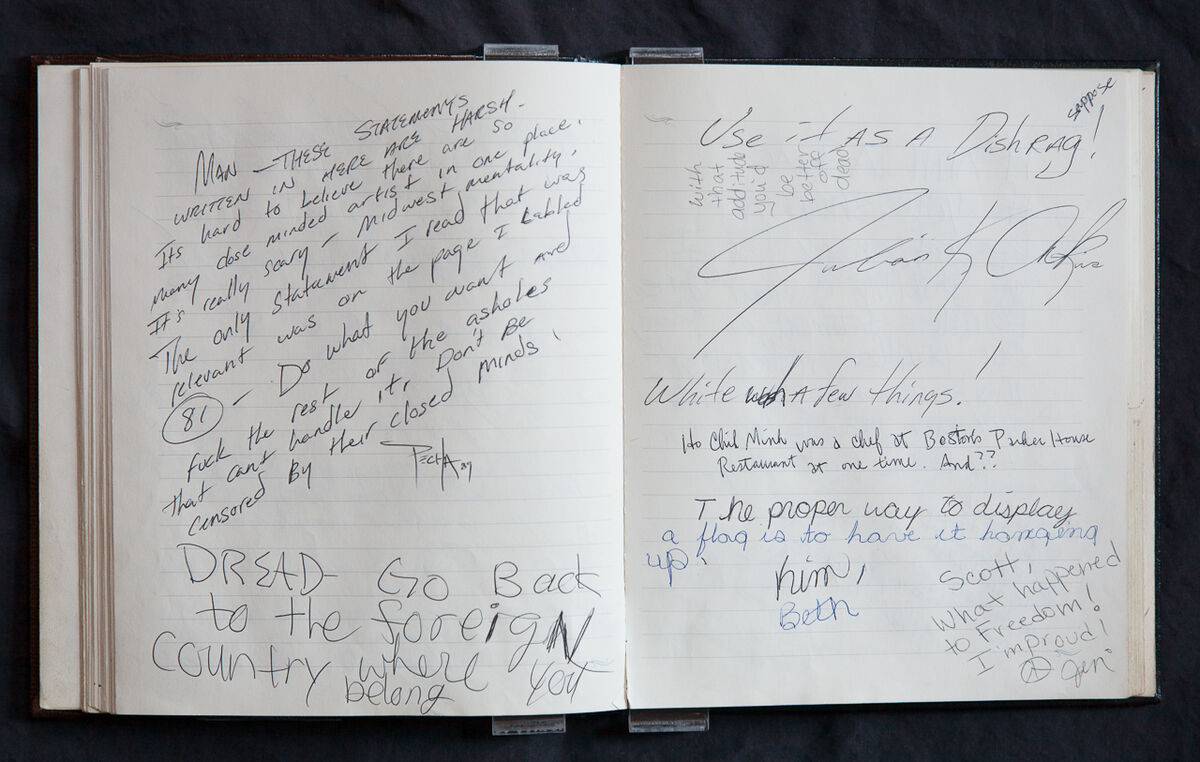 Ledger page from Dread Scott, What is the Proper Way to Display a U.S. Flag?, 1988. Courtesy of the artist.

Scott argued that the flag itself was actually a symbol of American sacrilege. As it promoted national fervor, it also encouraged oppression, both foreign and domestic (of the black community, in particular). “Some people see a flag and it brings a sense of pride and well-being,” said Scott during our recent conversation—noting that for millions of others, it represents police brutality and state aggressions. Scott’s artwork brought these tensions to the gallery, allowing visitors to contemplate their personal reactions to the flag and reconsider its meaning.
Scott first showed the work at a local alternative exhibition space without issue, but the presentation at the SAIC provoked national ire. Critics complained that the school received public funding, which shouldn’t be used to support such provocative art. (The next year, the government cut the SAIC’s funding.) Veterans in particular took notice, protesting outside the galleries; the school received bomb threats, and staffers suffered death threats.
In the ledger accompanying the piece, the audience at the SAIC wrote in more nuanced responses. They left messages that ranged from “I am a German girl. If we Germans would admire our flag as you all do, we would be called Nazis again.…I think you do have too much trouble about this flag,” to “There are many questions you have raised. For that I thank you. It does hurt me to see the flag on the ground being stepped on. Yet now after days have passed, I have realized tat [sic] this is the ultimate form of patriotism.” (Admittedly, even before the age of anonymous internet comment boards, these were mixed in with some truly nasty notes, such as: “You’re fucked—minorities get everything!”) 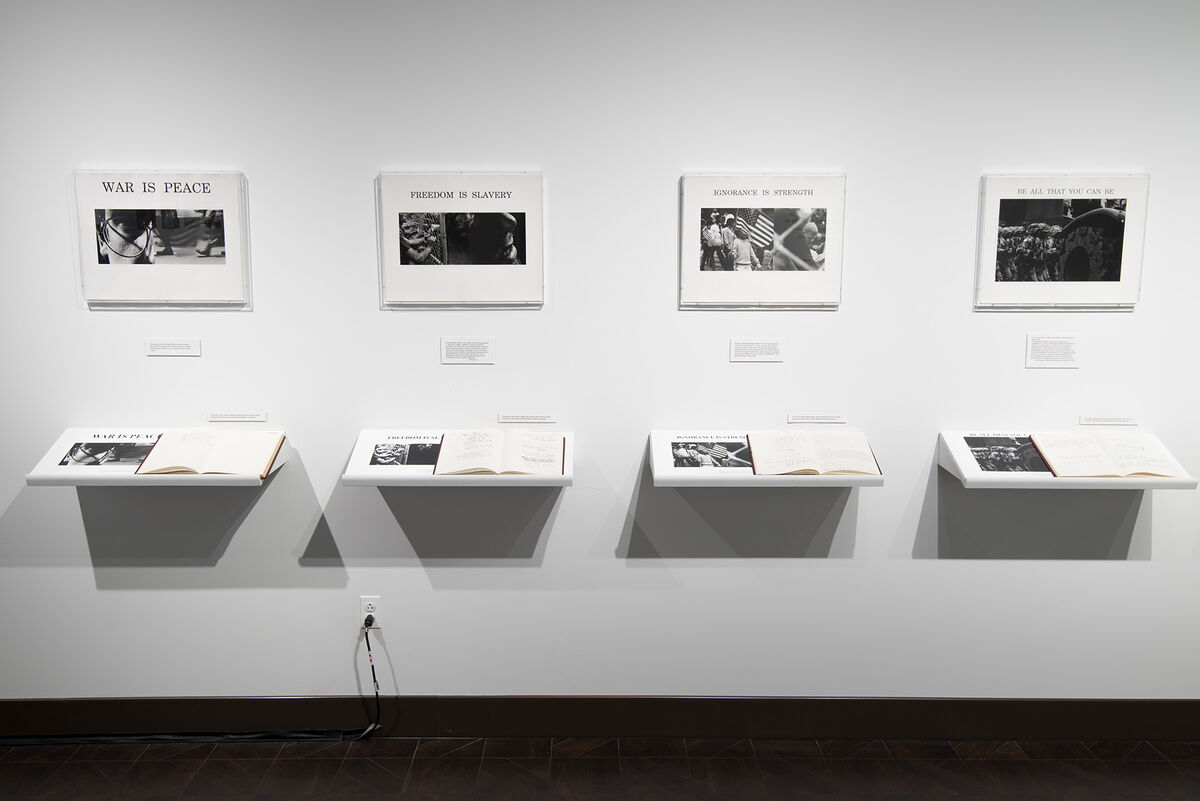 Advertisement
The SAIC temporarily closed as a result of the furor. Scott was so outraged that he held a press conference. “It’s an internationally recognized school,” he told Artsy—he didn’t understand why the SAIC caved to the pressure of people who were, in his estimation, the American version of the Iranian extremists who had, that same year, condemned author Salman Rushdie to death for his novel The Satanic Verses.
In March, as the SAIC show was shuttering, Kansas senator Bob Dole and Mississippi representative G. V. Montgomery (a Republican and a Democrat, respectively) both proposed legislation that would outlaw displaying the flag on the ground. “I don’t know much about art, but I know desecration when I see it,” Dole told the New York Times, referring to Scott’s work. President George H. W. Bush told the Chicago Sun Times that the piece was “disgraceful.” Yet Bush also told the reporter that he wasn’t keen on enacting legislation that would ban such presentations of the flag. “I’m always worried about the right of free speech,” he said.
Compelled to further engage with national politics, Scott took part in a 1990 Supreme Court case, United States v. Eichman, after he (and three others) were arrested for burning flags on the steps of the U.S. Capitol, in protest of the Flag Protection Act of 1989. Suddenly Scott—and his artwork—were at the center of a discussion about patriotism, creative freedom, and the protection of national symbols. In court, Scott acted as a defendant in an argument that flag burning represented “symbolic speech.” The Court ultimately ruled that the First Amendment allows citizens to desecrate the flag. 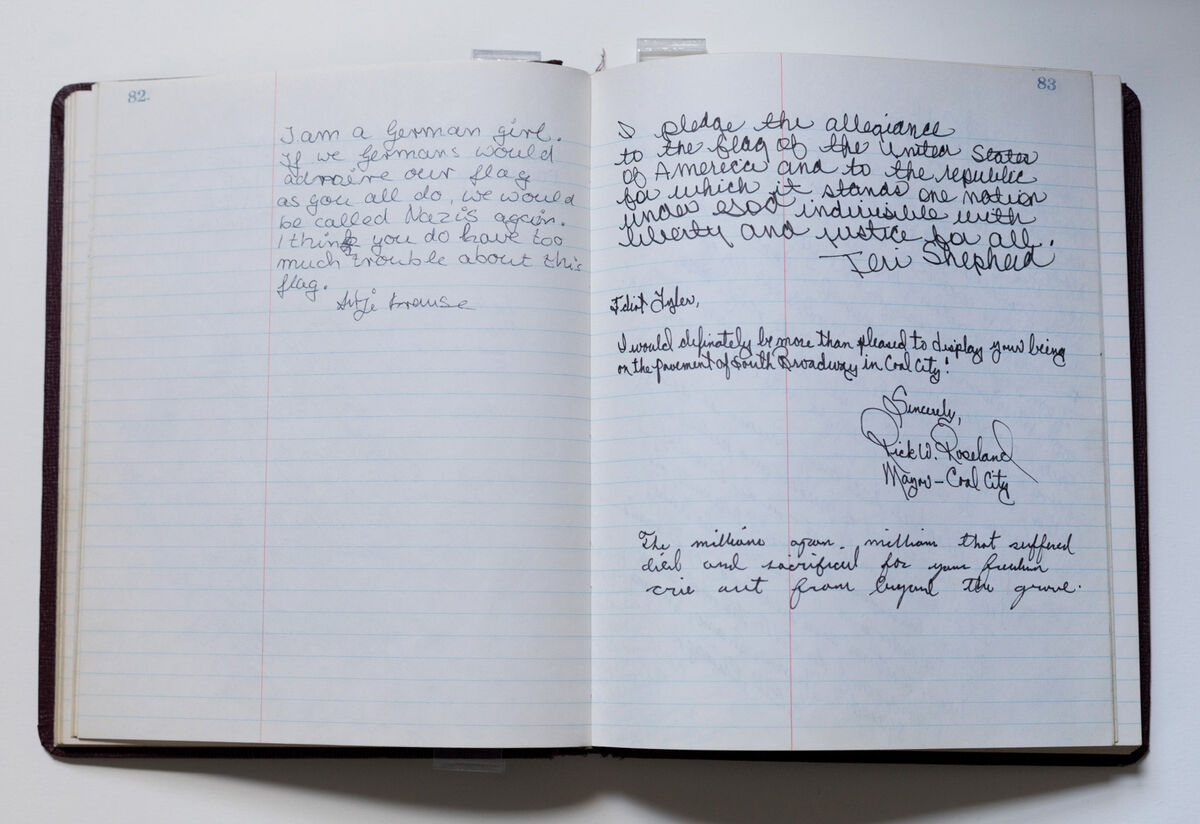 Ledger page from Dread Scott, What is the Proper Way to Display a U.S. Flag?, 1988. Courtesy of the artist.

The controversy surrounding What is the Proper Way to Display a U.S. Flag? didn’t dissuade Scott from tackling politically charged work in the future. Since the 1990s, the artist has sold anti-war T-shirts, burned money on Wall Street, and initiated a series of other protest-oriented public performances; this November, he’ll reenact a slave rebellion. In 2015, he created a new flag, flown outside Jack Shainman Gallery in Manhattan, which read: “A Man Was Lynched by Police Yesterday.” It harkens back to the 1920s and ’30s, when the Manhattan NAACP headquarters hung a similar banner over its door. Through this work, Scott connects the lynchings of that era with today’s injustices.
Scott believes that artists have a responsibility, whether they’re working in abstraction or social practice, to imagine how the world could be radically different, and better. The stakes are especially high at the moment; he believes that Trump is now “trying to remake America on a fascist foundation” and has been using patriotic symbols to further his endeavors. “In Germany, there were a lot of swastikas and it was a crime to desecrate the swastika,” he says. “But the real crime was that more people didn’t do that.”
Patriotism, he suggests, is often at odds with progress. As an artist, he’s perfectly positioned to reflect on the conflict in new and provocative ways.
Alina Cohen
Corrections:
A previous version of this article contained an error incorrectly stating that Dread Scott took part in the 1989 Supreme Court case, Texas v. Johnson. Scott took part in the 1990 Supreme Court case, United States v. Eichman.
Scott and his companions did not burn American flags to celebrate the positive results of the Supreme Court case United States v. Eichman; they burned flags to protest the Flag Protection Act of 1989.
Scott has not already staged a slave rebellion reenactment. The reenactment is scheduled for November.
The text has been updated to reflect these changes.
Related Stories

What Political Artists and Protesting Athletes Have in Common

Can Art Legally Threaten the President? 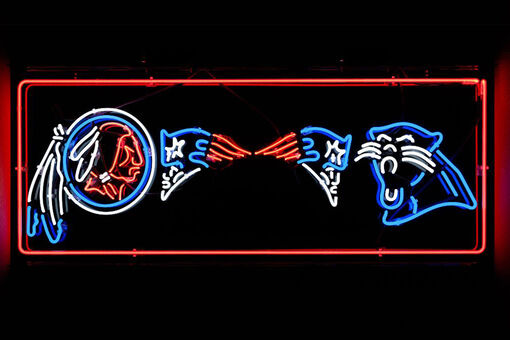 What Political Artists and Protesting Athletes Have in Common
Daniel Kunitz
Feb 2, 2018 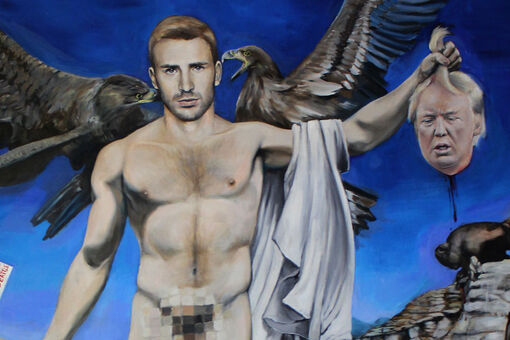 Can Art Legally Threaten the President?
Scott Indrisek
May 3, 2017