How the Met Convinced the U.S. Government That the Temple of Dendur Belonged in New York 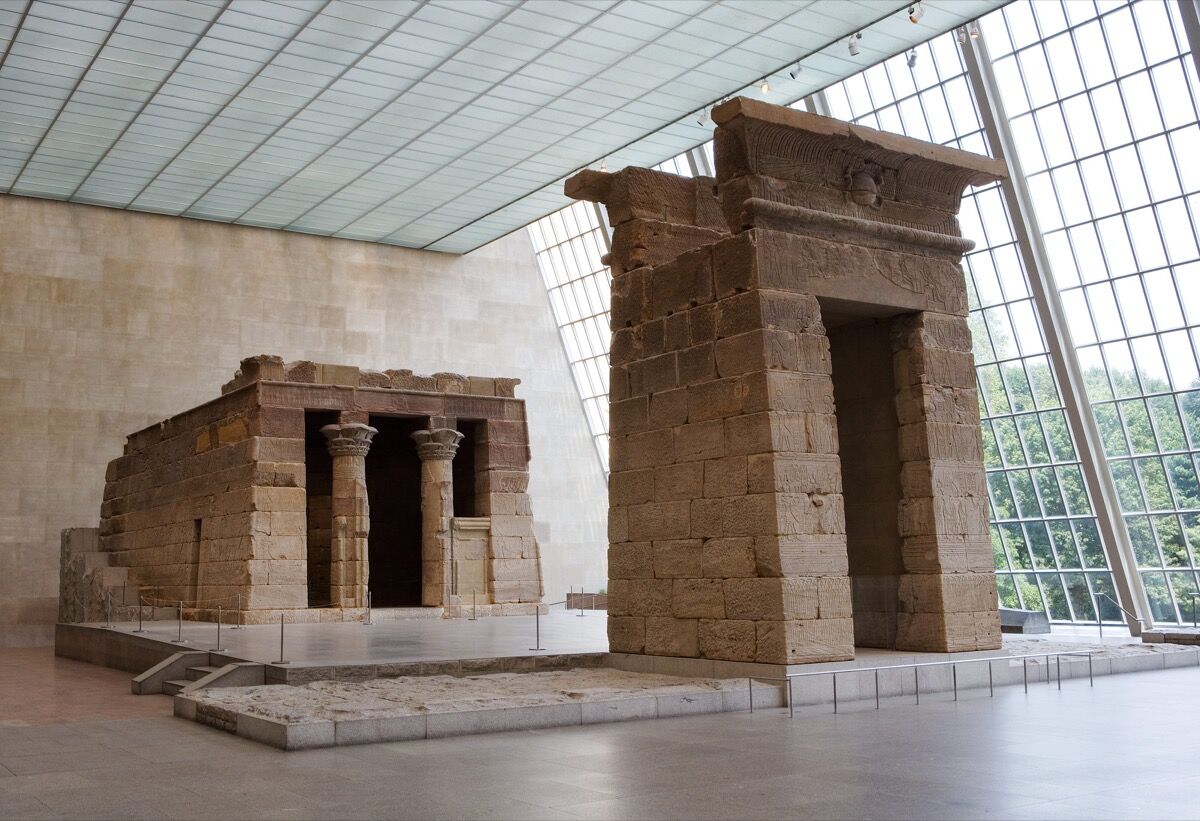 The Temple of Dendur. Courtesy of the Metropolitan Museum of Art.

In the summer of 1968, a freighter set sail from the Mediterranean Sea to New York City. Stowed in its hold were canned tomatoes, maraschino cherries, wheels of cheese—and a centuries-old Nubian temple, dismantled and packed away into 640 crates for its international voyage.
These ancient sandstone blocks, 800 tons in total, were a gift from Egypt to the United States. A year earlier, President Lyndon B. Johnson had declared that the Metropolitan Museum of Art would serve as the Temple of Dendur’s new home; this month marks the 50th anniversary of that decision. For the occasion, the museum has cleaned the temple’s sandstone facade and unearthed a wealth of archival material.
One such document, a letter typed on White House stationery, memorializes the moment President Johnson awarded Dendur to the Met. It is addressed to the museum’s intrepid director at the time, Thomas Hoving, who was instrumental in landing the acquisition—among his most significant additions to the collection (and there were many). 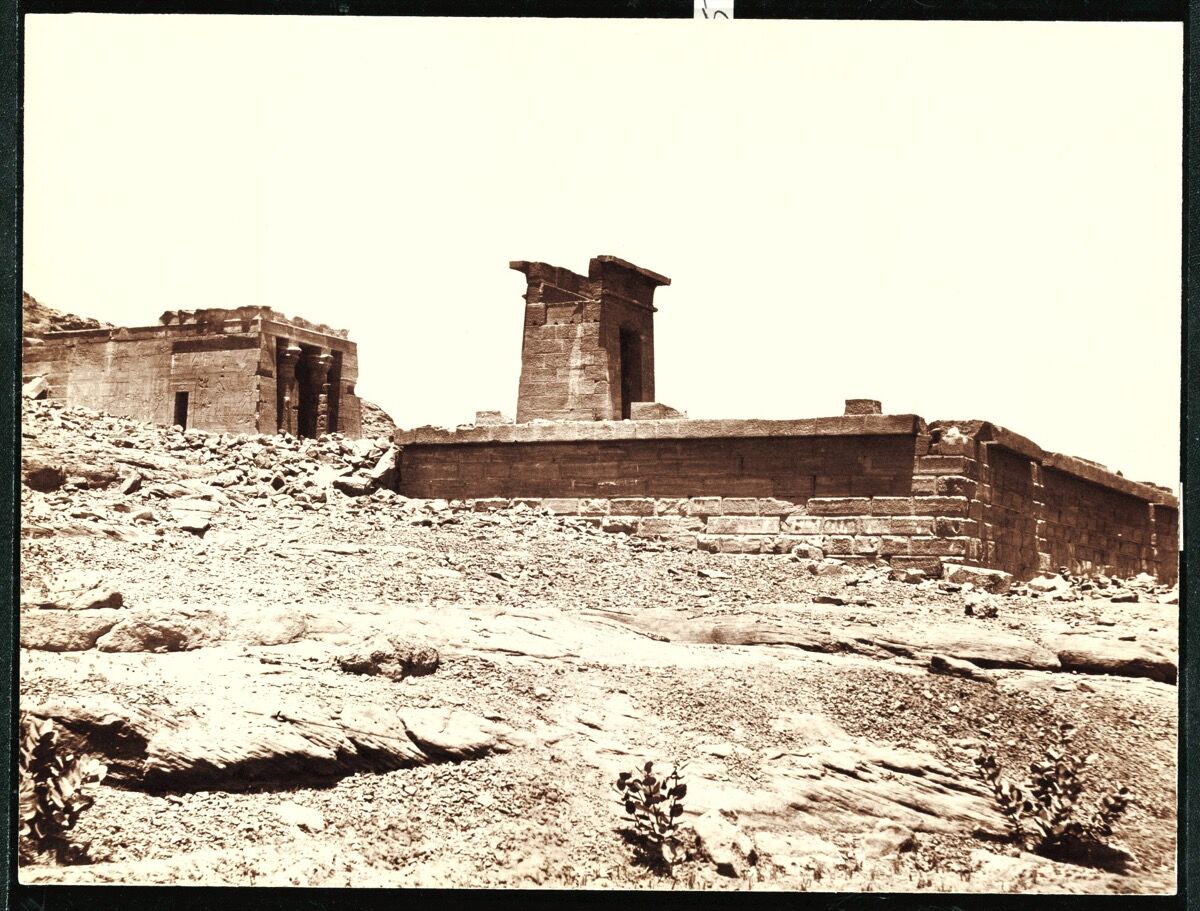 The Temple of Dendur in situ, ca. 1865–1885. Photo by Antonio Beato. Courtesy of the Metropolitan Museum of Art.

This message put an end to the tug of war between the Met and the Smithsonian Institution, which had hoped the temple would travel from the banks of the Nile to those of the Potomac. It also marked the beginning of a flashy new era for the ancient building, which was finally installed in the Met’s Sackler Wing in September 1978. Replete with reflecting pool and glass wall looking out onto Central Park, the new wing was designed to have the kind of elegant, dramatic grandeur that upscale Vegas casino designers would kill to match.
As such, it soon became a splashy setting for lavish high-society parties during the conspicuous consumption of the 1980s. The Sackler Wing has been a popular venue for all kinds of festivities since, including charity events and classical music concerts. Last year, the museum used it for some first-rate, high-tech edutainment—using projected animations, they decorated the temple’s beige façade with the kind of polychromatic designs curators believe once adorned it. 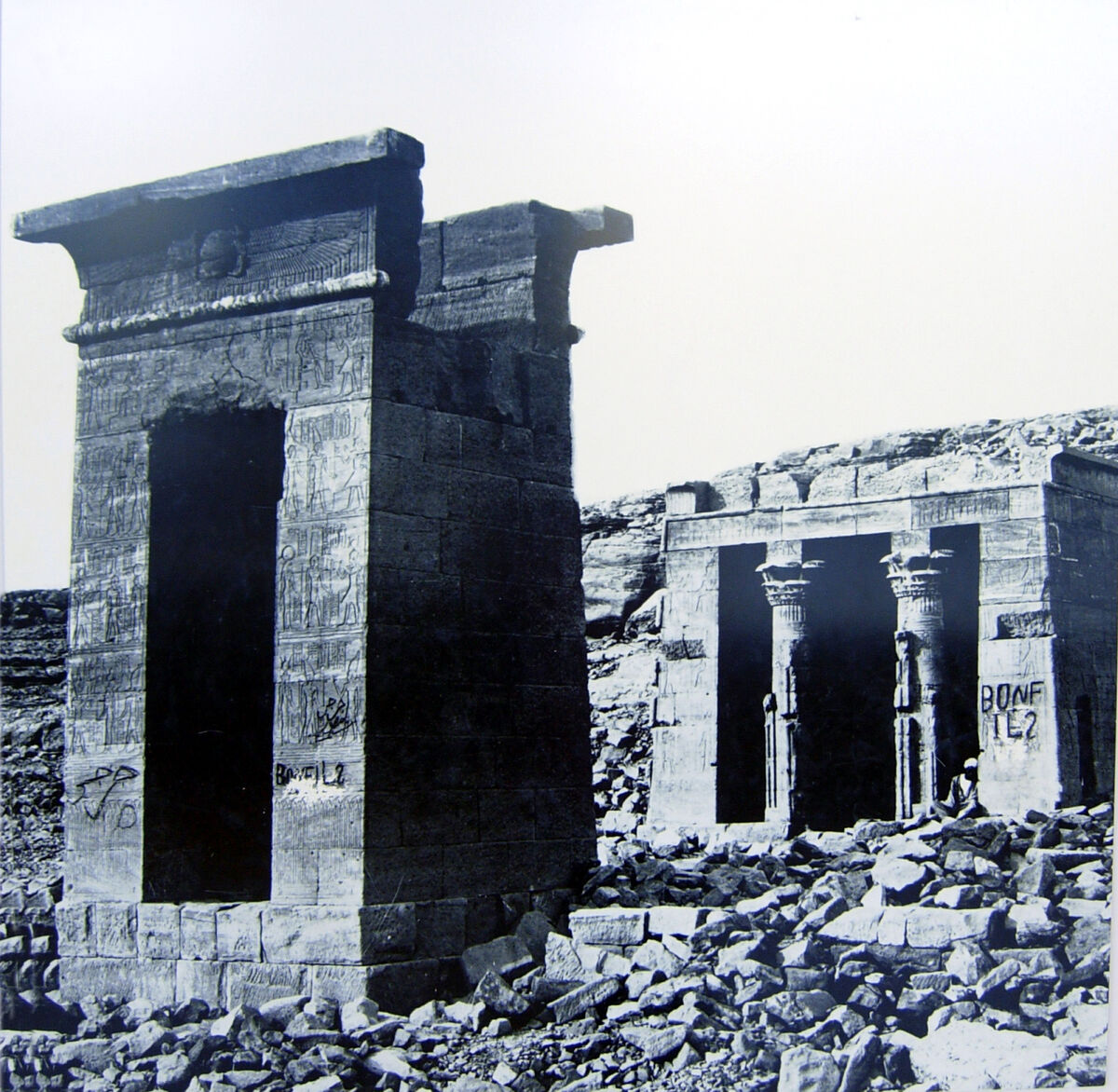 Image of The Temple of Dendur. Courtesy of the Metropolitan Museum of Art.

Advertisement
Not to say that the Temple of Dendur’s pre-Met existence didn’t have some thrills of its own. Completed by 10 B.C., it was built in southern Egypt during the reign of Augustus Caesar, the first Roman emperor. Diplomacy is in its bones: As the story goes, it was built for a local Nubian ruler who helped the Romans win a battle. His sons had drowned in the Nile—a death, in Egyptian mythology, that leads to deification—and the temple is devoted to the two boys alongside the Egyptian goddess Isis. The sacred structure features reliefs that depict the emperor Augustus styled as a pharaoh, a curious mix of Roman and Egyptian influences. It also boasts more recent additions, including the names of a 19th-century British naval officer and Italian Egyptologist carved into the stone.
But Dendur’s story gets especially dramatic in the late 1950s, when Egypt began preparations for the new Aswan High Dam off the Nile. Although the proposal would provide irrigation and hydroelectric power to Egypt’s growing population, it would also drown several ancient structures built along the river’s banks—Dendur among them. With the Egyptian government lacking resources to pay for the relocation of the ancient structures, UNESCO launched a fundraising campaign, and the U.S stepped up to the plate. According to some sources, it was Jacqueline Kennedy who urged JFK to convince Congress to approve the $10 million contribution to the cause. In return, Egypt offered the U.S. the Temple of Dendur.
Johnson’s administration inherited the task of deciding which institution would receive the temple. As a November 1968 New York Magazine story recalled, “Philadelphia was interested in it, Baltimore, Phoenix, Albuquerque, Memphis. There was a real estate operator in Florida; Southern Illinois University was thinking of putting the temple in the Buckminster Fuller geodesic dome after Expo was over; and a group of towns in Southern Illinois with names like Cairo (the ‘little Egypt of Illinois’) found in the coincidence of nomenclature sufficient reason for wanting the temple.” 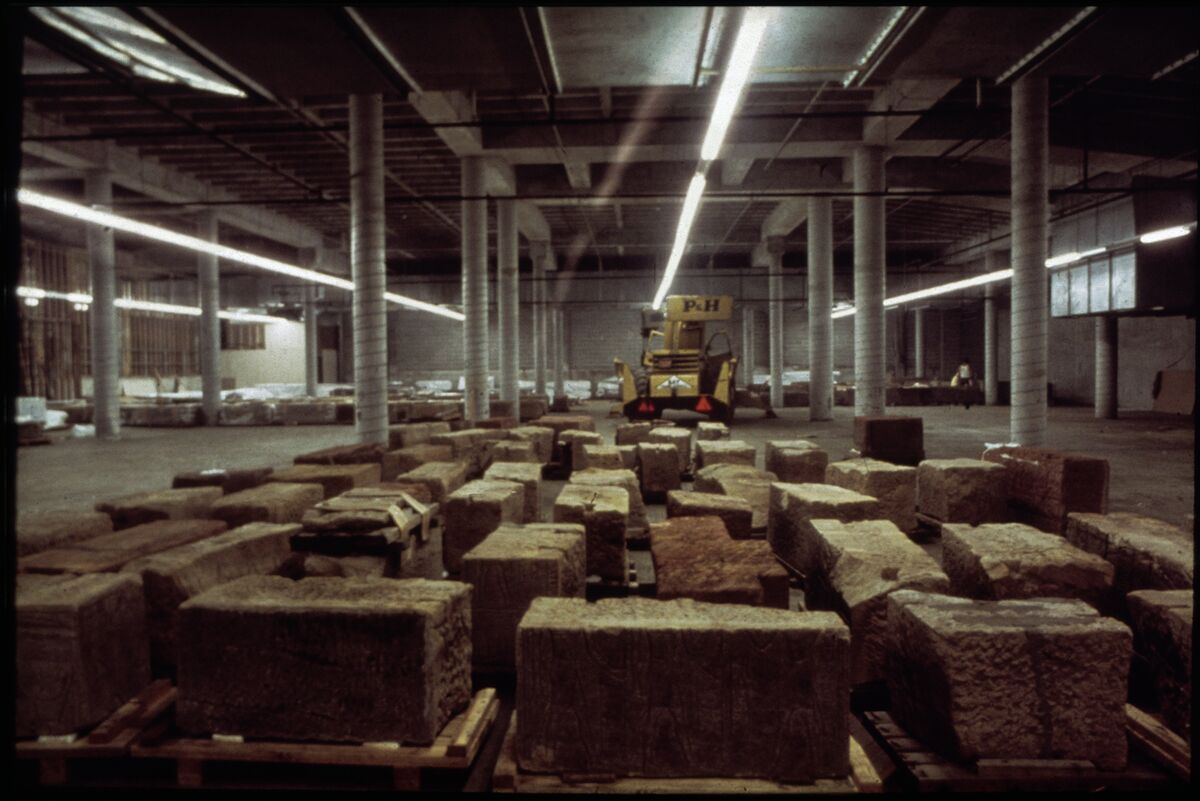 But the Smithsonian Institution was the Met’s fiercest competitor, arguing that Dendur should be situated outdoors in the nation’s capital. According to Hoving in his best-selling 1993 memoir, Jackie Kennedy was one of the more passionate advocates for its placement in D.C. In his typical frank and florid manner, Hoving recounts a heated phone call with the former first lady. The museum director requested Jackie’s help in garnering the support of her brother-in-law, New York senator Bobby Kennedy, but she vehemently refused.
“‘I don’t care if the temple crumbles into sand, but I want it to be built in the center of Washington as a memorial to Jack,’” Hoving recalls Jackie saying. “‘I don’t care about the Met. I don’t care about New York. Or Bobby’s senatorial duties. Or his constituents. Or scholarship. Or this conservation business …’.” Although Jackie eventually called back to apologize, that “conservation business” was likely what tipped the scales in the Met’s favor. At a government hearing, Hoving argued that placing the temple outside (as the Smithsonian reportedly planned to do) would destroy the monument in as little as 25 years.
Hoving was quick to recognize the burden the new acquisition posed. “Victory gave birth to a whole new set of problems,” he writes. “Having won the lumbering temple, I was faced with actually receiving it, storing it, and putting it back together.” Upon arriving at the Met, the stones were first stored in a tent-like bubble in the museum’s south parking lot. Eventually, they were moved to a steel hanger-like construction in the north lot, where they were examined, cleaned, and conserved. Finally, native Italian stonemasons reassembled the temple in the Sackler Wing according to ancient grooves and incisions earlier builders had left on the stone (as well as photos and drawings). 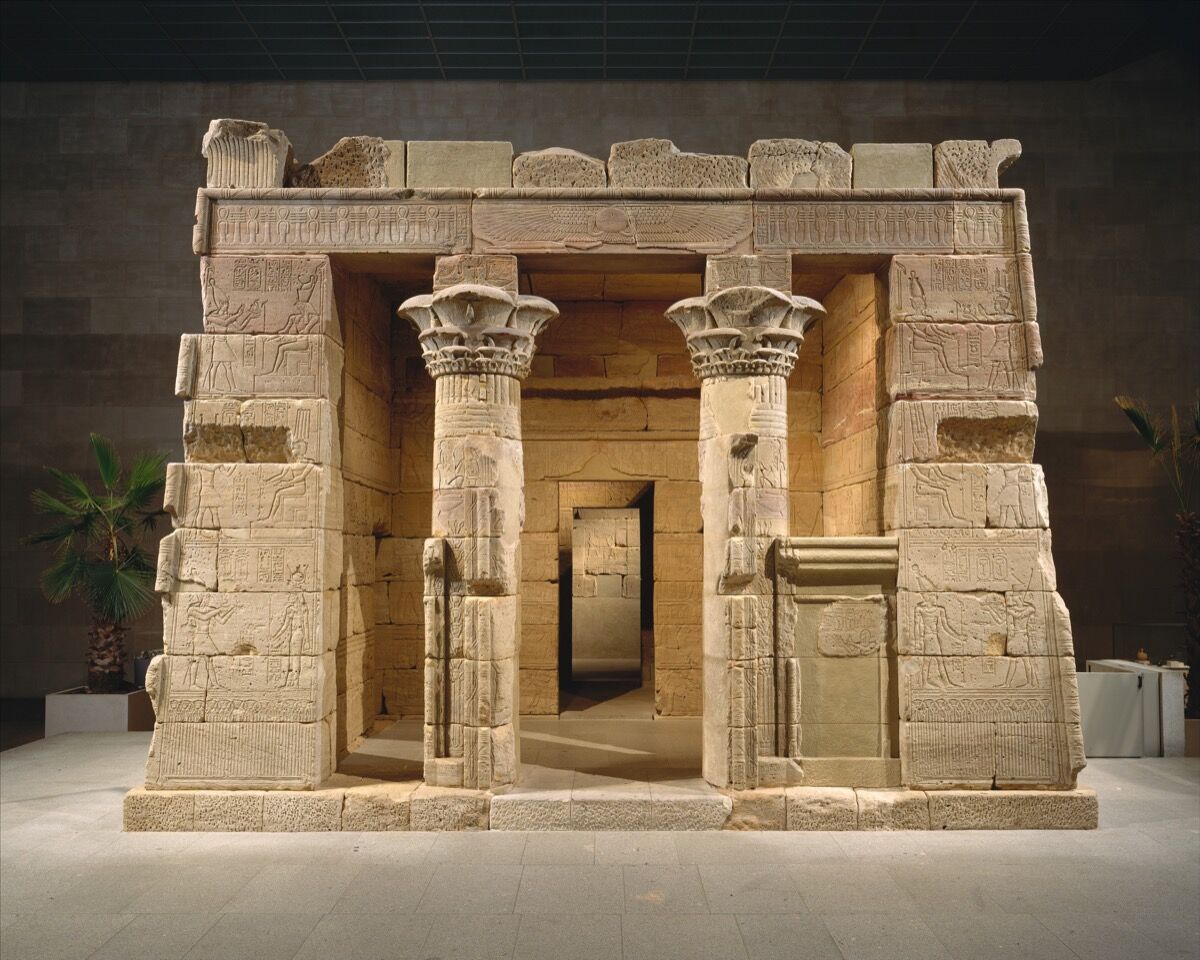 Installation view of The Temple of Dendur. Courtesy of the Metropolitan Museum of Art.

The Sackler Wing was unveiled just a month before the Met presented the goldmine exhibition “Treasures of Tutankhamun,” which Hoving had helped negotiate with Egypt. The roughly 8 million visitors to the King Tut show could view the Temple of Dendur from a balcony above—a perk that the seven other museums on the Tut circuit couldn’t offer.
That kind of synergy continues today. “Most visitors that come to the Met ask to see the Temple of Dendur,” notes Diana Craig Patch, curator in charge of the museum’s department of Egyptian art. Almost half a century after the temple’s arrival in New York, it’s hard to imagine the Met without it.
Meredith Mendelsohn
Related Stories