In Harry Potter and the Sorcerer’s Stone, the half-giant gameskeeper of Hogwarts School of Witchcraft and Wizardry, Rubeus Hagrid, appears on a stormy night and tells the 11-year-old titular orphan: “Harry—yer a wizard.” With that, the book’s readers are swept away, along with Harry Potter, into the enchanting wizarding world that exists just beyond the sight of non-magical folk, known as Muggles.
Author J.K. Rowling’s care in building out the curious minutiae of the young wizard’s new surroundings has been one of the drivers of Harry Potter’s ascendence as an international phenomenon for two decades. And though much of the world was drawn from Rowling’s own imagination, the author also tapped into a litany of narratives behind real objects and magical artifacts, as well as mythology.
On the surface, there are common tropes that all children will recognize, from broomsticks (used in the sport Quidditch) to unicorns (who dwell in the Forbidden Forest), each of which have a long history in folklore. Readers have also debated Rowling’s inspiration for some of the books’ major plot points, such as Horcruxes—objects and creatures imbued with the dark wizard Lord Voldemort’s soul to ensure his longevity—which recall the Slavic legend of Koschei, who was immortal thanks to a matryoshka of creatures and objects, and could only be defeated when the smallest nested object, a needle, was broken in half.
Hogwarts’s curriculum is also vividly colored with both the mythology and history of our own world, and the exhibition “Harry Potter: A History of Magic,” on view at the New-York Historical Society through January 2019, uncovers its heritage through centuries of artifacts, illustrated manuscripts, and scientific objects. Here, we share some of the objects that inspired the adventures and practices of Harry Potter’s wizarding world. 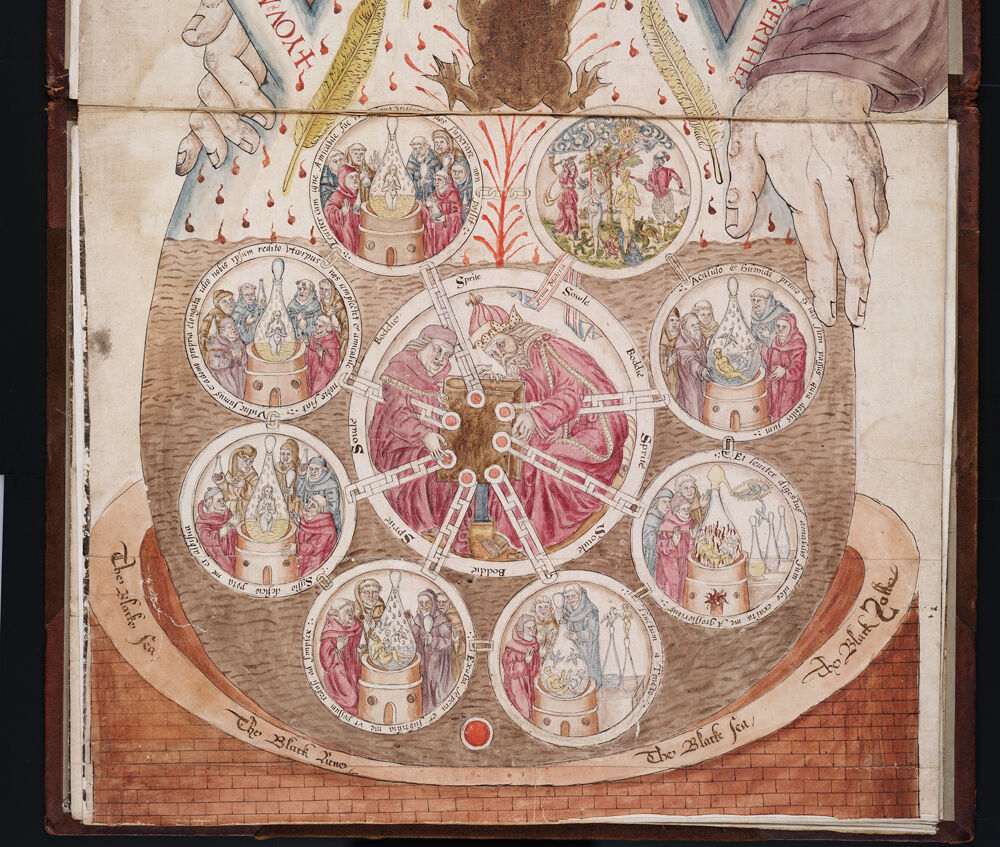 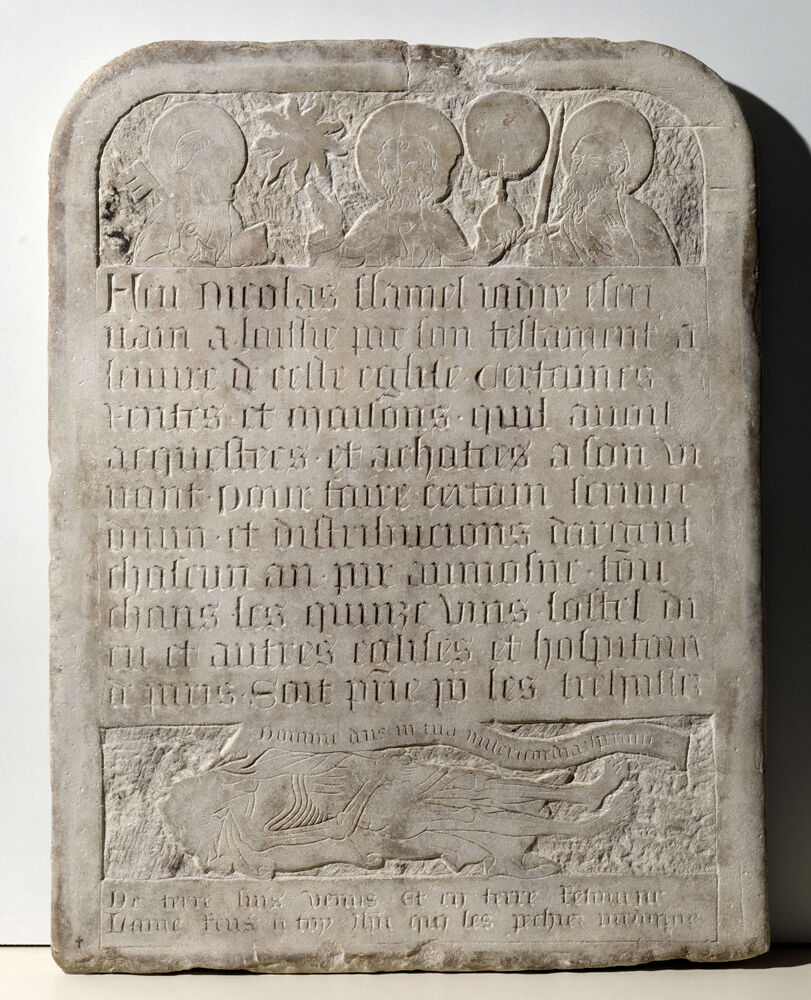 Harry’s first major adventure at Hogwarts takes him deep into the bowels of the castle, where he must keep the Philosopher’s Stone out of reach of Lord Voldemort, who failed to kill him as an infant. Weakened, Voldemort seeks the stone for its ability to produce the Elixir of Life, which can give the drinker immortality, so long as the potion is consumed periodically. (The stone can also turn metals into gold, providing endless wealth, too.)
The maker of the stone was alchemist Nicolas Flamel, who was nearly 700 years old in Rowling’s world and based on a real historical figure. That Flamel was a landlord in 14th-century Paris who lived into his eighties (though his exact age is disputed), at a time in Europe when men were fortunate to live to 50. Flamel’s long life, as well as his great wealth (which he gained from his properties and his wife’s previous marriages), sparked a flurry of posthumous rumors that he was an alchemist who had evaded death by possessing the Philosopher’s Stone; the rumors turned to legend because of claims that he had been seen after his death.
The exhibition features Flamel’s tombstone, which was rescued from its alleged fate as a cutting board in a Parisian grocery store and is now part of the collection of the Musée de Cluny. Also on display is The Ripley Scroll, a nearly 20-foot-long illustrated manuscript from 1570 that serves as a guide for alchemic instruction, and contains symbolism used in Harry Potter. The scroll lists black, red, and white stones as the ingredients of the Philosopher’s Stone; according the exhibition, Rowling worked that reference into the names of Harry’s three father figures: Sirius Black, Rubeus Hagrid, and Albus Dumbledore. 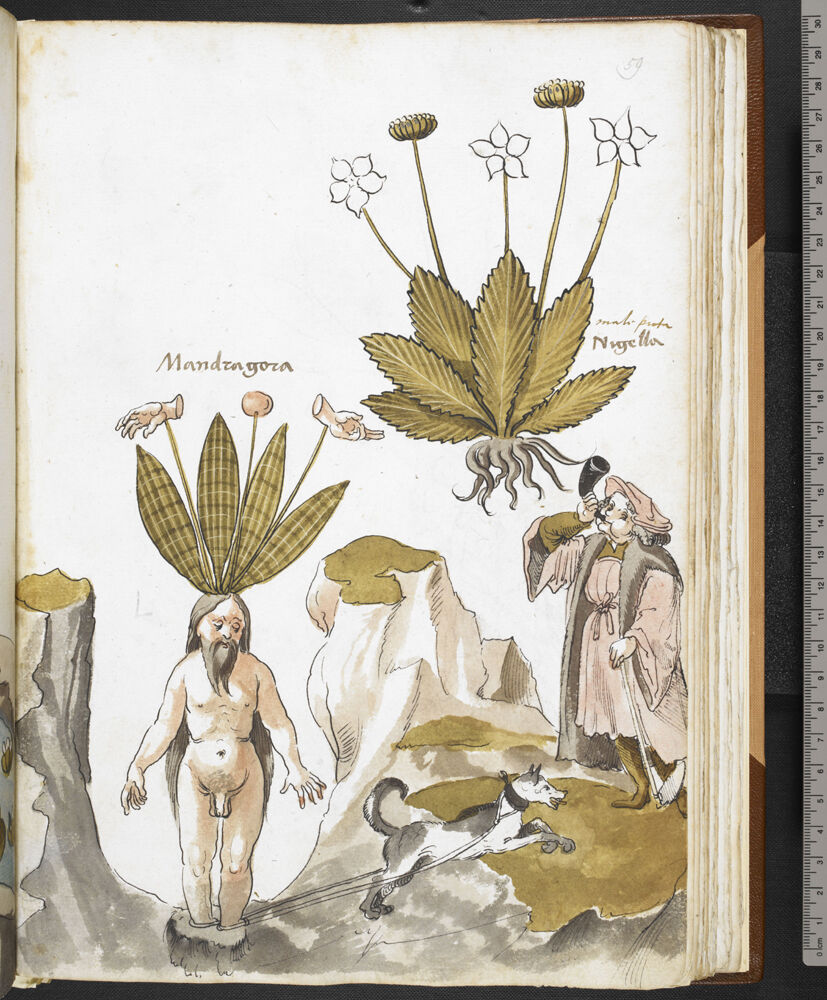 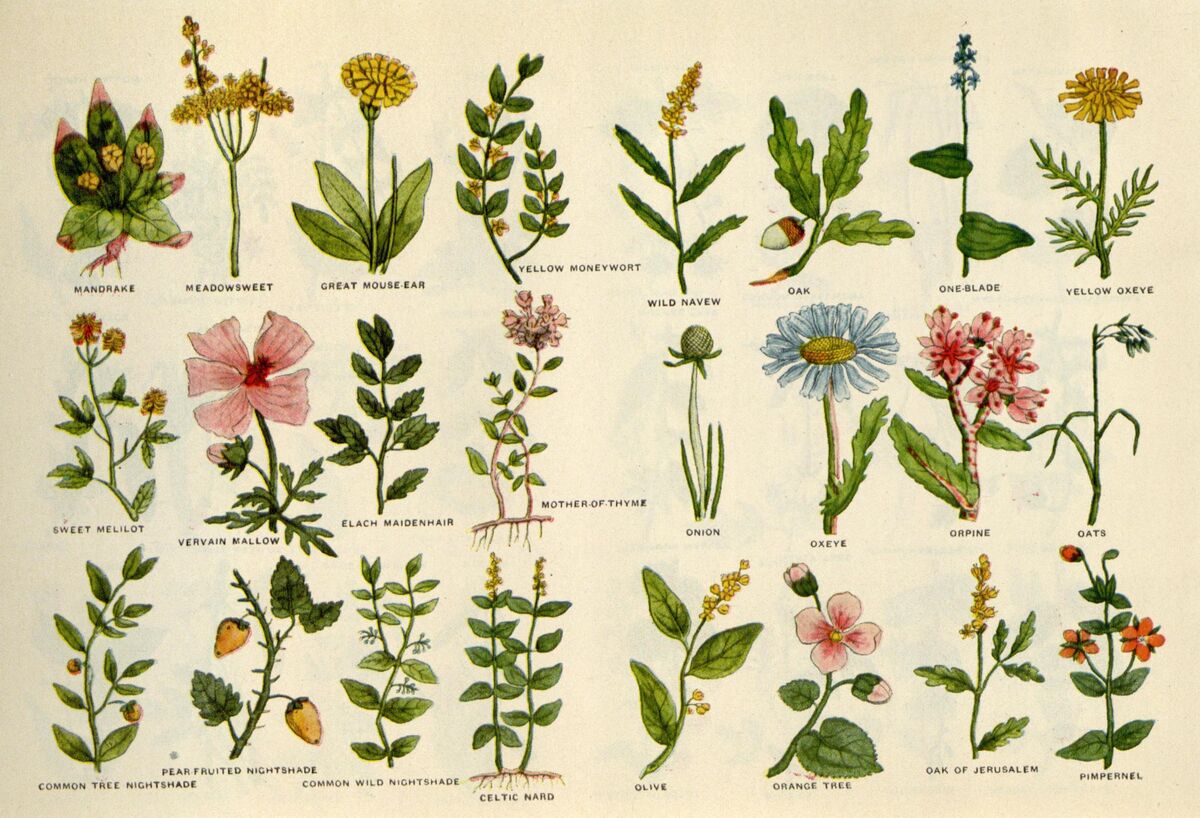 Advertisement
In Harry’s second year, in Herbology class, Hogwarts students learn how to safely re-pot mandrakes: leafy humanoid plants that grow from babies to adults. They shriek when removed from the earth, and during infancy, their screams will knock a person unconscious; when fully grown, they are fatal.
The mandrake root is an actual plant from the nightshade family that has a long history of use. In Harry Potter, a brew made from mandrake can cure anyone under a petrification curse, but in the Bible’s Book of Genesis, the root was used to aid conception, and in ancient Greece, it was used as both an anesthetic and an aphrodisiac.
So where did the anthropomorphic qualities—and the screaming—come from? Mandrake roots can resemble humans, particularly babies, which was one of the reasons it became a popular fertility charm to place under one’s pillow in the Middle Ages. In some texts, they were even categorized as “male” and “female,” depending on their shape. And at some point, it was recorded that they shrieked upon being unearthed, causing madness. A 15th-century illustration from Europe instructed the best way to safely pick them: Use a rope to tie the plant to a dog, then blast a horn. The sound will both overpower the mandrake’s howls and frighten the dog so it pulls up the root.
Though it’s unclear why mandrakes were believed to be capable of insanity-inducing screams, perhaps the answer lies in the hallucinogenic properties of the root: It may have caused a number of accidental psychedelic trips over the centuries.
It’s also notable that Rowling was faithful to a particular book when dreaming up Herbology lessons. She referenced Culpeper’s Complete Herbal, published in 1653 by English botanist and apothecary Nicholas Culpeper, which outlines the use of over 400 herbs, and is still in print today. Culpeper, like many knowledgeable herbalists, was tried for witchcraft, though he was ultimately acquitted. 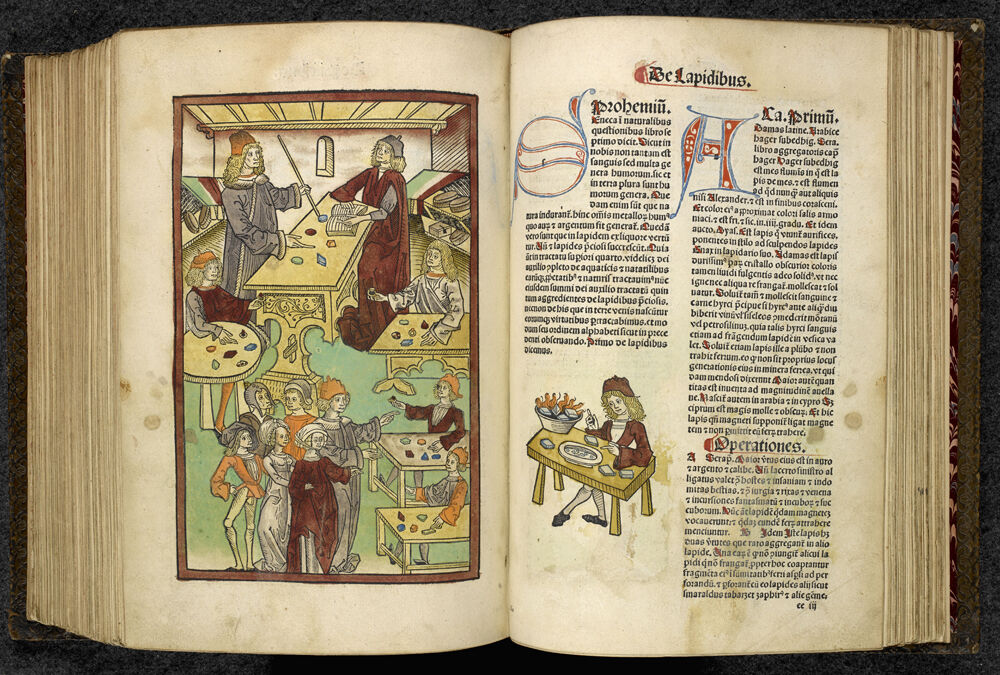 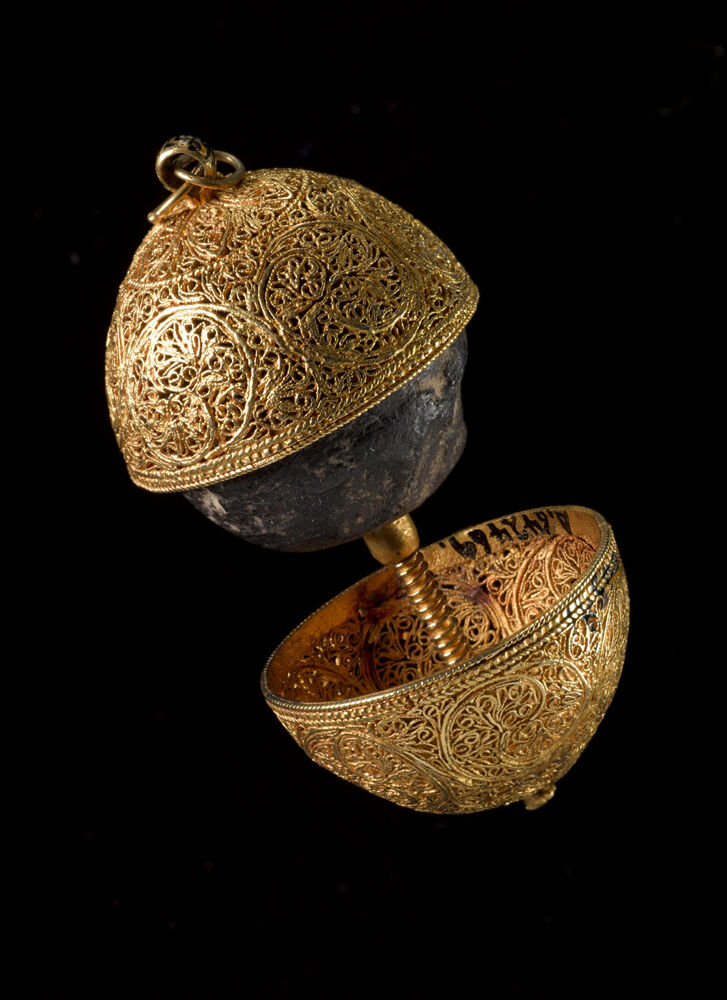 Bezoar stone in a gold filigree case 17th century. © The Board of the Trustees of the Science Museum, London. Courtesy of New York Historical Society Museum & Library.

Like Chekhov’s Gun, bezoars are introduced in Harry’s very first potion class, and one eventually saves Ron Weasley’s life after he drinks poisoned mead in the sixth book, Harry Potter and the Half-Blood Prince. In the books, bezoars are an antidote, sourced from the stomachs of goats, which are easy to use: “Just shove a bezoar down their throats,” Rowling wrote.
Bezoars do exist. They are clumps of undigested fibers that are, in fact, found inside of goats, as well as cows and elephants. They were believed to have anti-poison properties—though they were likely effective because they induced vomiting. Introduced by Arab physicians, bezoars were popular in medieval Europe; they were so prized that they were often kept in costly casings with ornate handiwork, like gold filigree.

Fawkes, Hogwarts headmaster Albus Dumbledore’s close companion, is a phoenix with scarlet and gold plumage, whose own tailfeather is the magical core of Harry’s wand. In the second book, Harry Potter and the Chamber of Secrets, after looking worse for the wear (like “a half-plucked turkey,” Rowling wrote), Fawkes suddenly bursts into flame, startling Harry. But Dumbledore isn’t alarmed: “About time, too,” he says. “He’s been looking dreadful for days.”
Fawkes is immortal, his life punctuated by periodic “Burning Days,” followed by rebirth from the ashes. That attribute is the hallmark of the mythic phoenix, whose legend has been passed down from ancient Egypt, Greece, and Rome. In ancient Rome, the bird was often used as a symbol for the empire’s long reign. In a 13th-century manuscript, the “fenix” is said to be native to Arabia, with a lifespan of up to 500 years, while a 5th-century text from Greek historian Herodotus was the first to mention the bird’s red and gold coloring.
Fawkes has the ability to heal, too, shedding tears when Harry is bitten by a basilisk to remedy the poisoned wounds. In Rowling’s world, a basilisk is a towering serpent whose glance alone is fatal. But an account from classical antiquity, from Pliny the Elder in 79 C.E., paints a slightly different picture: The creature is said to be palm-sized, more chicken than snake, and can be killed with the scent of a weasel. Over the centuries, basilisks have been depicted with varying combinations of rooster and serpent proportions, and though Rowling didn’t give her basilisks feathers and a beak, they do begin life by hatching from chicken eggs. 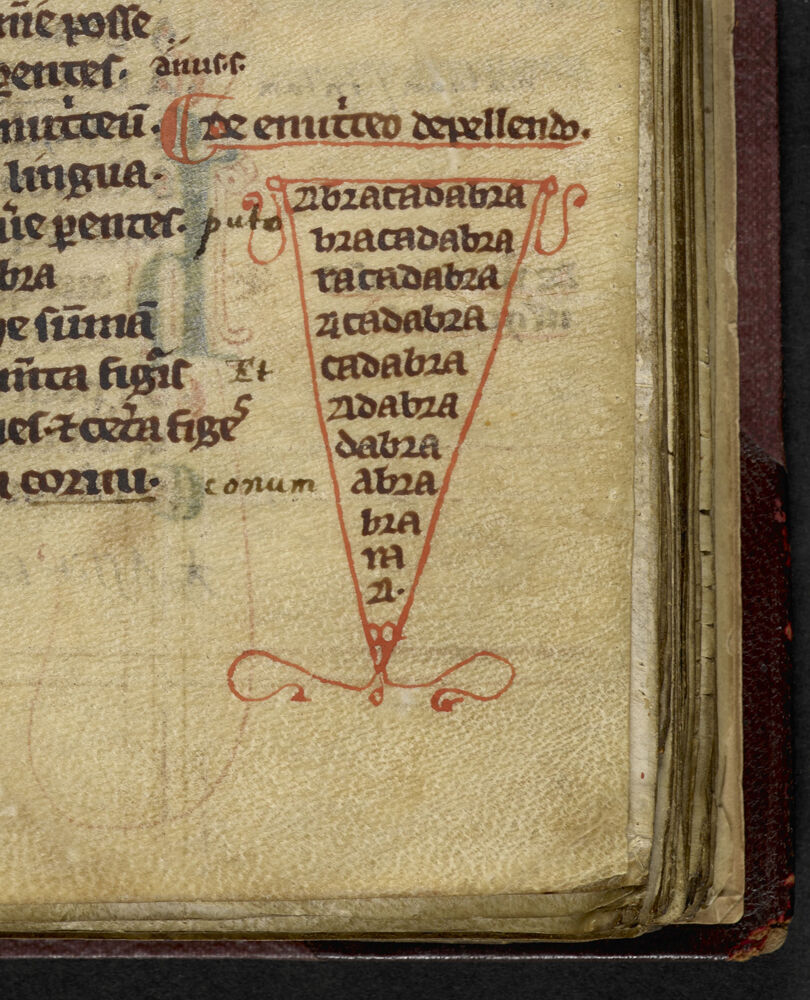 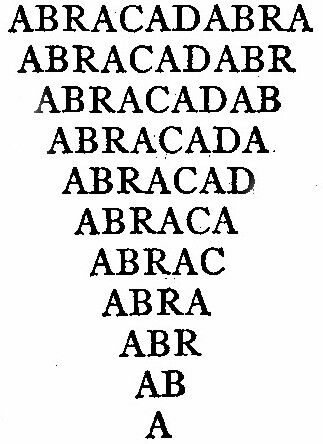 Image of Abracadabra from Encyclopedia Britannica, via Wikimedia commons.

The etymology of the most treacherous spell in Harry Potter—avada kedavra—can be easily deduced from the most widely known word associated with magic, abracadabra. But while “abracadabra!” is usually exclaimed before pulling a bunny out of a hat, its Harry Potter complement is used to kill someone instantly.
Avada kedavra is one of three Unforgivable Curses and is illegal to cast, but is utilized by dark wizards(the other two cause torturous pain or control the mind). While abracadabra does have historical significance, it was not used for nefarious means, but as a healing charm against malaria. The incantation made its first appearance in a medicine book written by a physician to Roman emperor Caracalla, sometime at the turn of the 2nd century. According to the exhibition, to cure malaria, “the word should be repeatedly written out, each time omitting one letter. The charm was then worn as an amulet around the neck, in order to drive out the fever.” 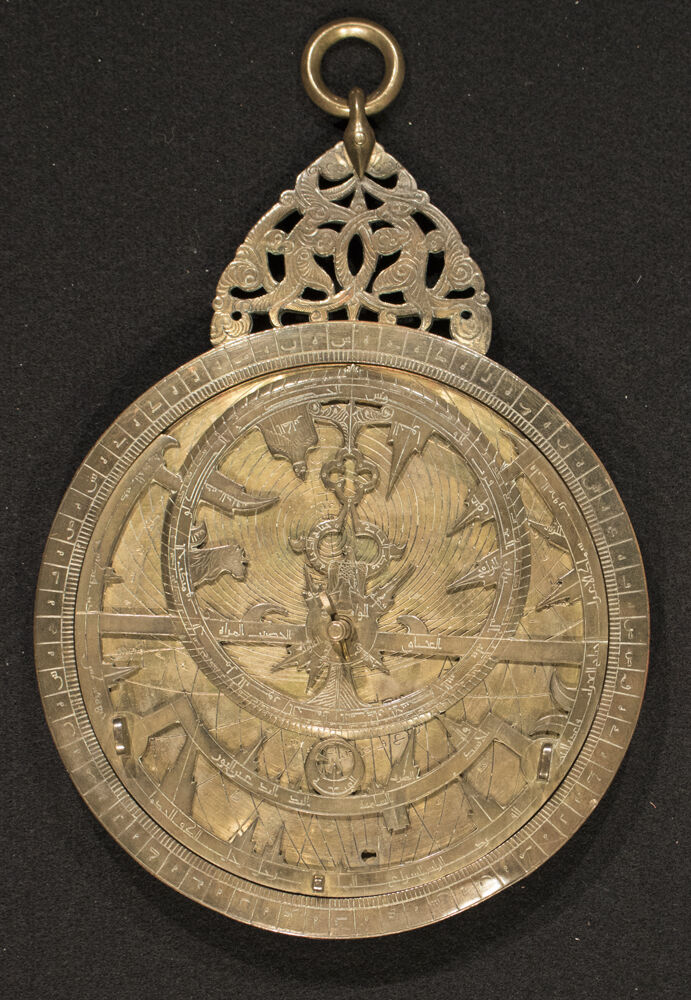 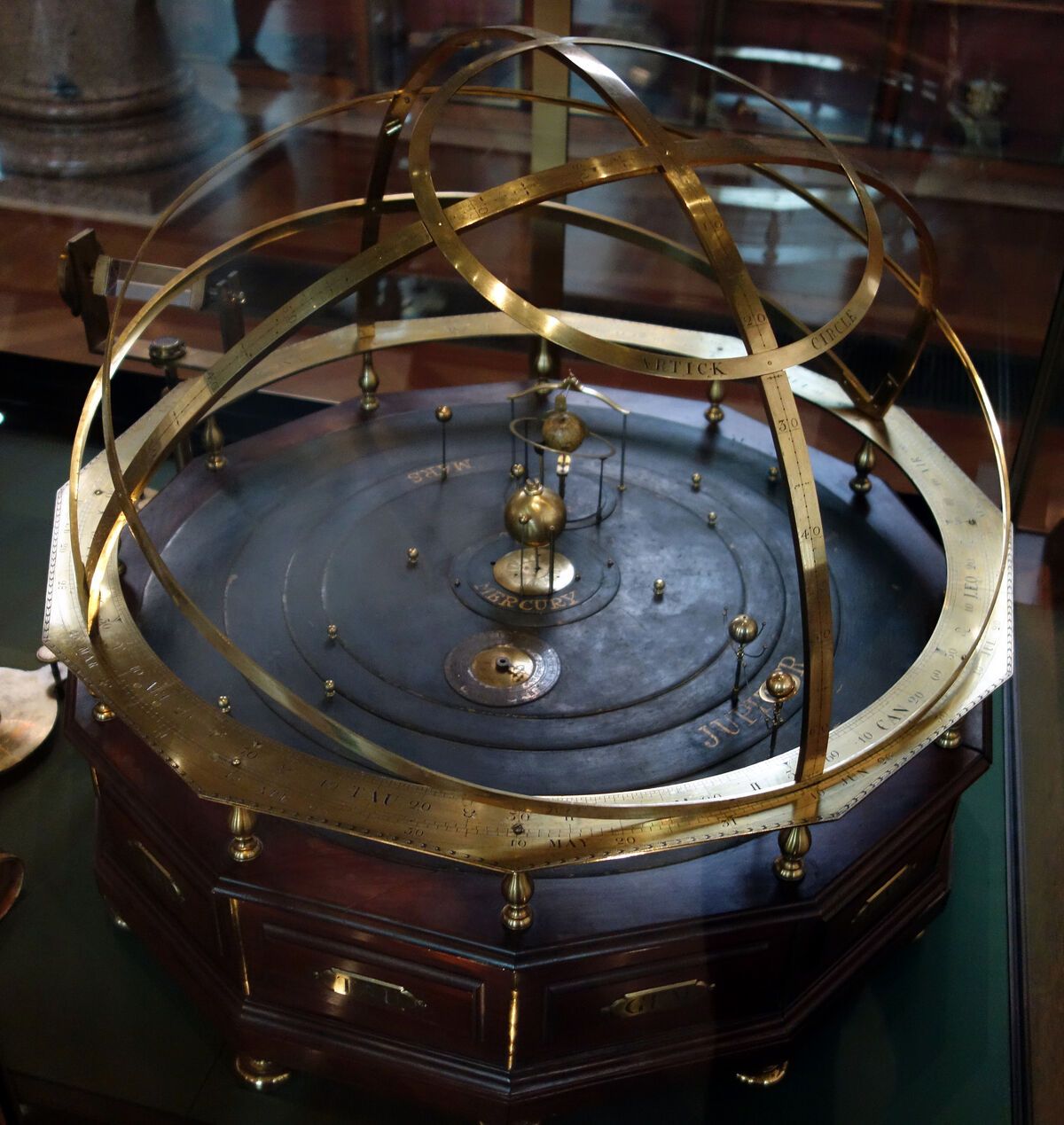 For inspiration, Rowling often looked to the stars. Indeed, she named many of her characters after stars and constellations, including Sirius (the “dog star”), Bellatrix, and Draco. (There are many other examples, and you can even create your own Harry Potter Starfinder). In the books, Astronomy, in which students identified celestial bodies, was a required class for five out of seven years; Divination, which featured star-reading as a way to see the future, was an elective from the third year on.
Two instruments used in Hogwarts classes are orreries and astrolabes. The former, a mechanical instrument that can predict planetary movements, is used by Professor Trelawney in Divination classes. In history, the first modern orrery was named after the one created by Charles Boyle, an Earl of Orrery, in 1704. Astrolabes, on the other hand, were invented in the Hellenistic era of Greece; they were used to measure heavenly bodies in classical antiquity and the Middle Ages. They were similarly used in the Islamic Golden Age, where they also served as navigational tools to find Mecca. A 13th-century astrolabe from Persia, featured in the exhibition, is believed to be “one of the oldest geared instruments” that exists today.
In the books, centaurs are known for their ability to read the planets and stars without the aid of instruments—and for their haughtiness toward humans. The centaur Firenze says “tiny human accidents” are “of no more significance than the scurryings of ants to the wide universe, and are unaffected by planetary movements.” To them, the tools used by wizards, such as star charts, are pointless. But the star charts used by Harry and his classmates to map the night sky have a real history in our world, too: The oldest complete star atlas was created during the Tang Dynasty in China around 684 C.E. Known as the Dunhuang Star Chart, it plotted 1,300 stars that are observable in the Northern Hemisphere.
Jacqui Palumbo is a contributing writer for Artsy Editorial.
Related Stories