At 30, ADAA Is the Country’s Longest-Running Fair—and Hasn’t Lost a Step 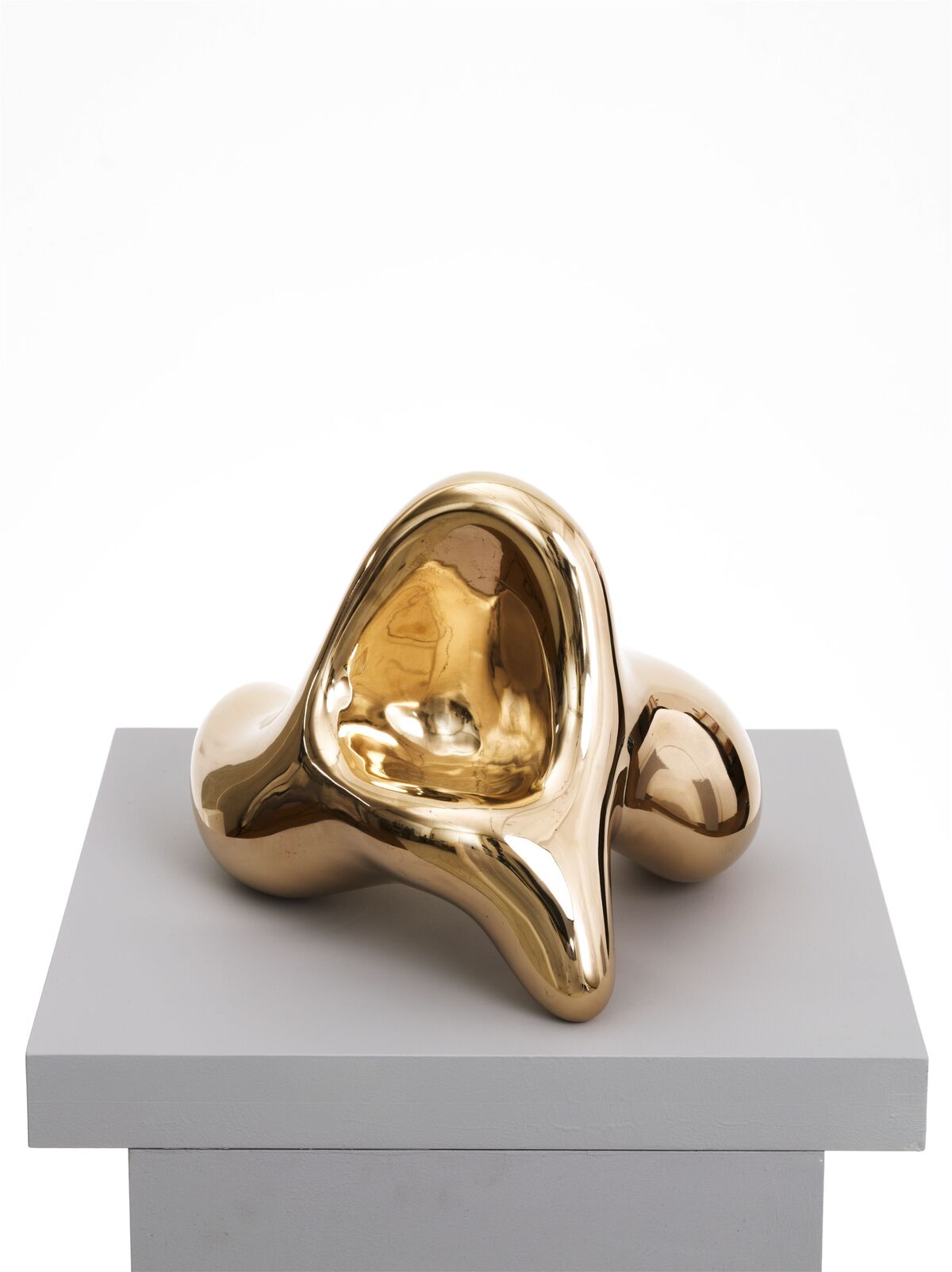 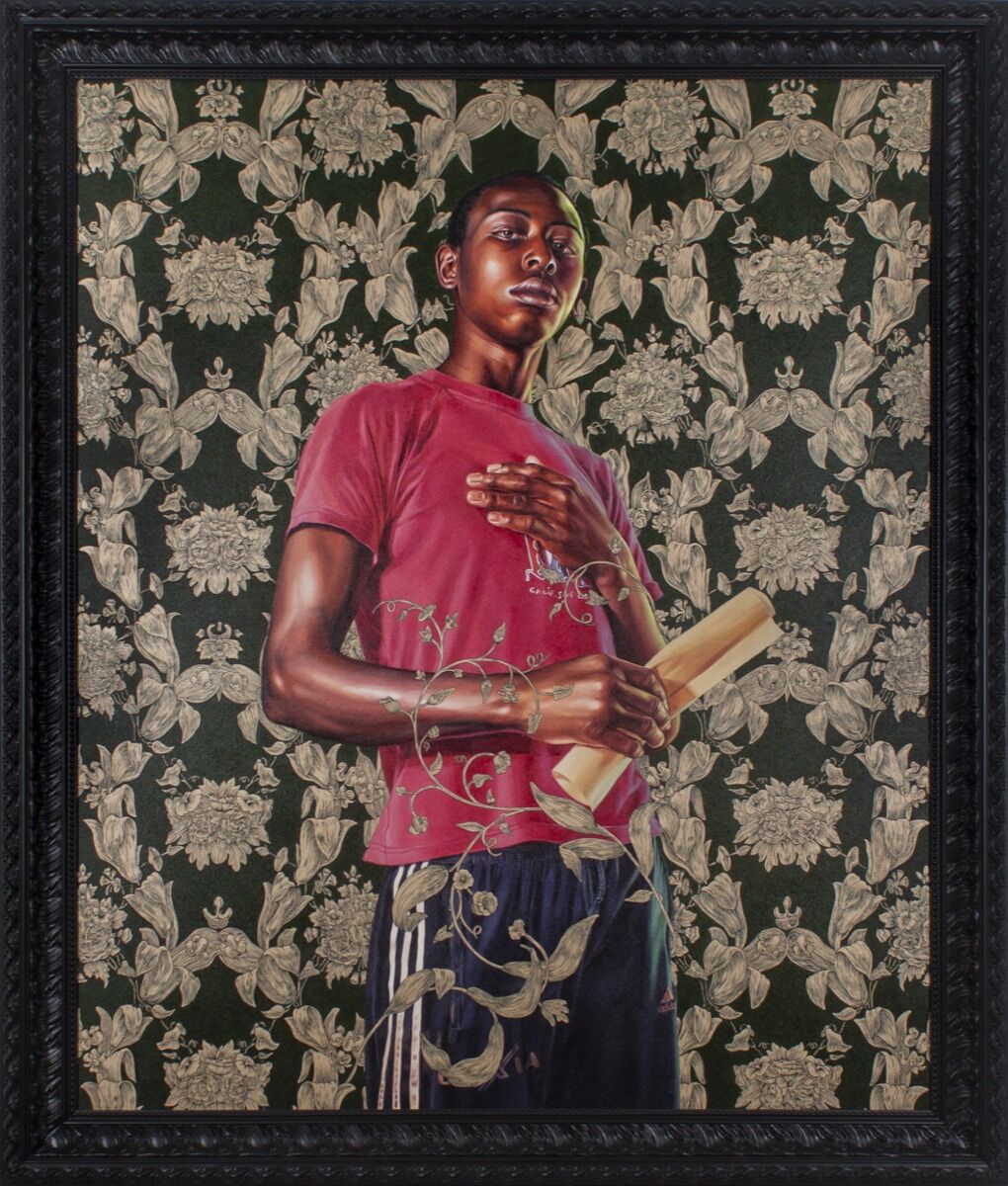 Before The Armory Show, Art Basel in Miami Beach, Frieze New York, TEFAF New York, or Frieze Los Angeles, before all of that, there was The Art Show, the annual expo put on at New York’s Park Avenue Armory by the Art Dealers Association of America (ADAA). With its 30th consecutive edition now underway, it is the longest-running art fair in the country. And despite it now having to share the spotlight with dozens of other stops on the global art world trail, Tuesday night’s opening gala proved that for dealers from the United States The Art Show remains a worthy place to bring high quality work and kick off the New York spring season.
For Adam Sheffer, partner at ADAA gallery Cheim & Read and president of the industry group’s board, the fair’s longevity lies in the fact that “it knows what it is.”
“It is run by art dealers for art dealers,” he said. “We’re in the business of art, we’re not in the business of art fairs.”
Sheffer was standing in one of the historic armory’s ornate anterooms Tuesday afternoon, having commenced a 30th anniversary champagne toast with some of ADAA’s longtime exhibitors. And then, at 5:00 p.m. on the dot, collectors began streaming into the opening gala, which has the distinction of being one of the more fancy fair vernissages, with a phalanx of tux-wearing waiters bearing smoked fish canapes and a dozen stocked bars lining the fair booths. 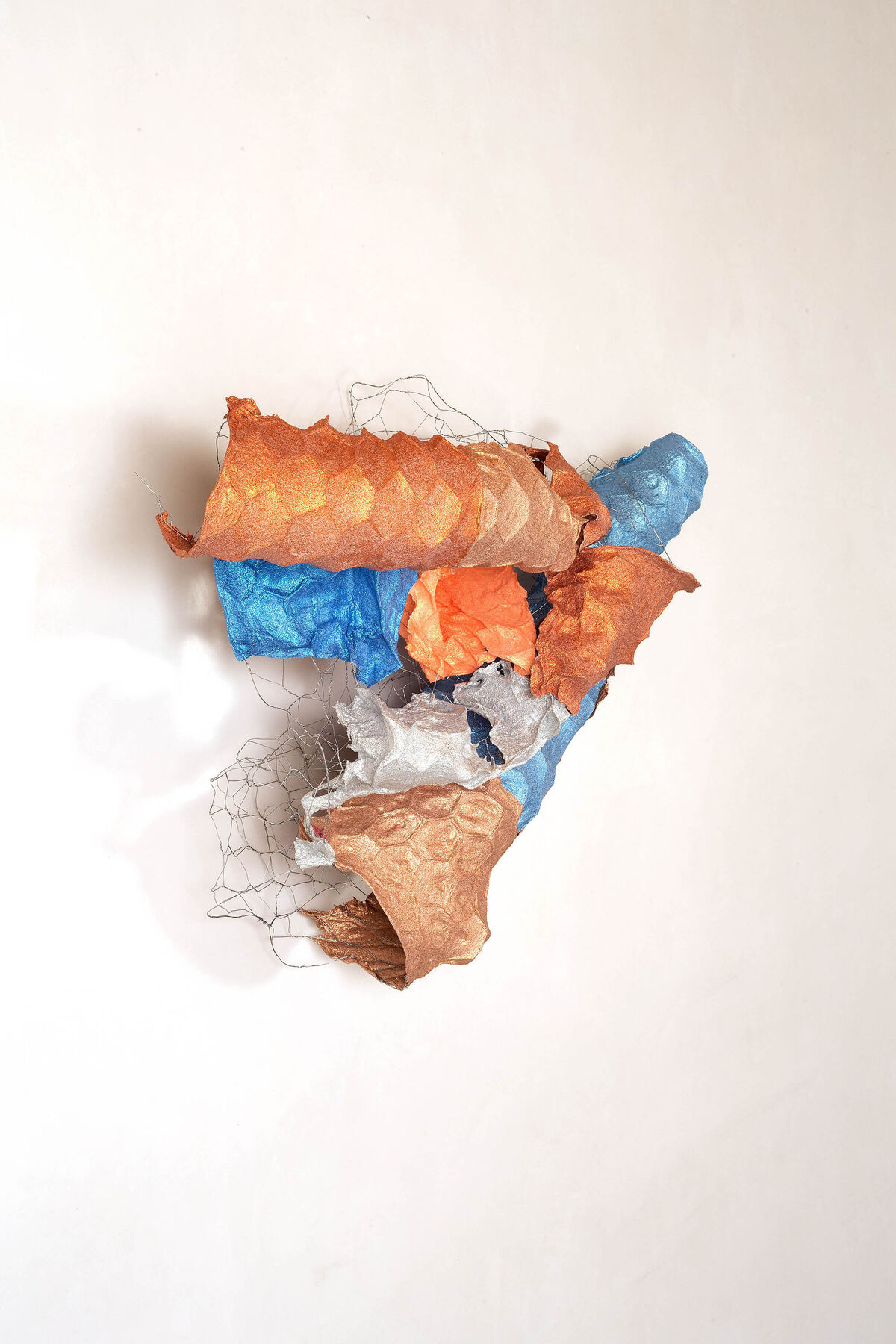 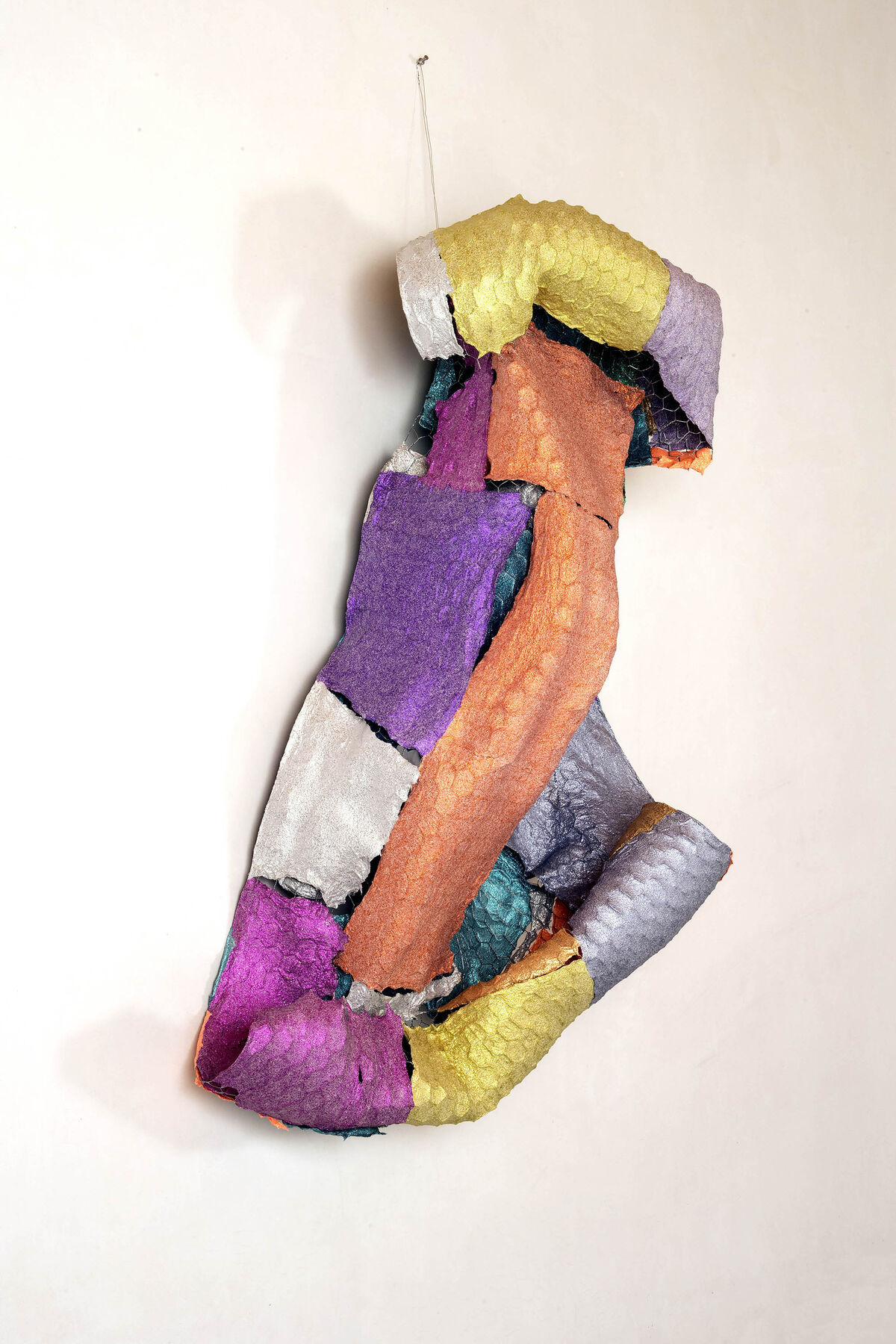 Tickets to the gala, which benefits the Henry Street Settlement, can run you up to $2,000—another distinction from most fairs.“You can’t just get a VIP card, you’ve got to shell out some money,” said Sheffer.
The opening was on the quiet side this year, which many chocked up to a scheduling snafu. The ADAA usually opens its doors the day before the opening of The Armory Show. But, alas, the Park Avenue Armory’s Upper East Side building was booked up the first Tuesday of March, so this year the gala took place a full week before The Armory Show, Independent, and Nada. Visiting collectors were forced to pick and choose when to be in New York, and many will have to sit this one out or come in early for Armory Week and catch the end of The Art Show’s run.
“Certainly there are going to be out-of-towners who aren’t going to make it, but for years the fairs were not aligned, and it seemed to work out really well,” Sheffer said. His fair was already off to a good start with several works by
Lynda Benglis
selling for between $75,000 and $150,000. 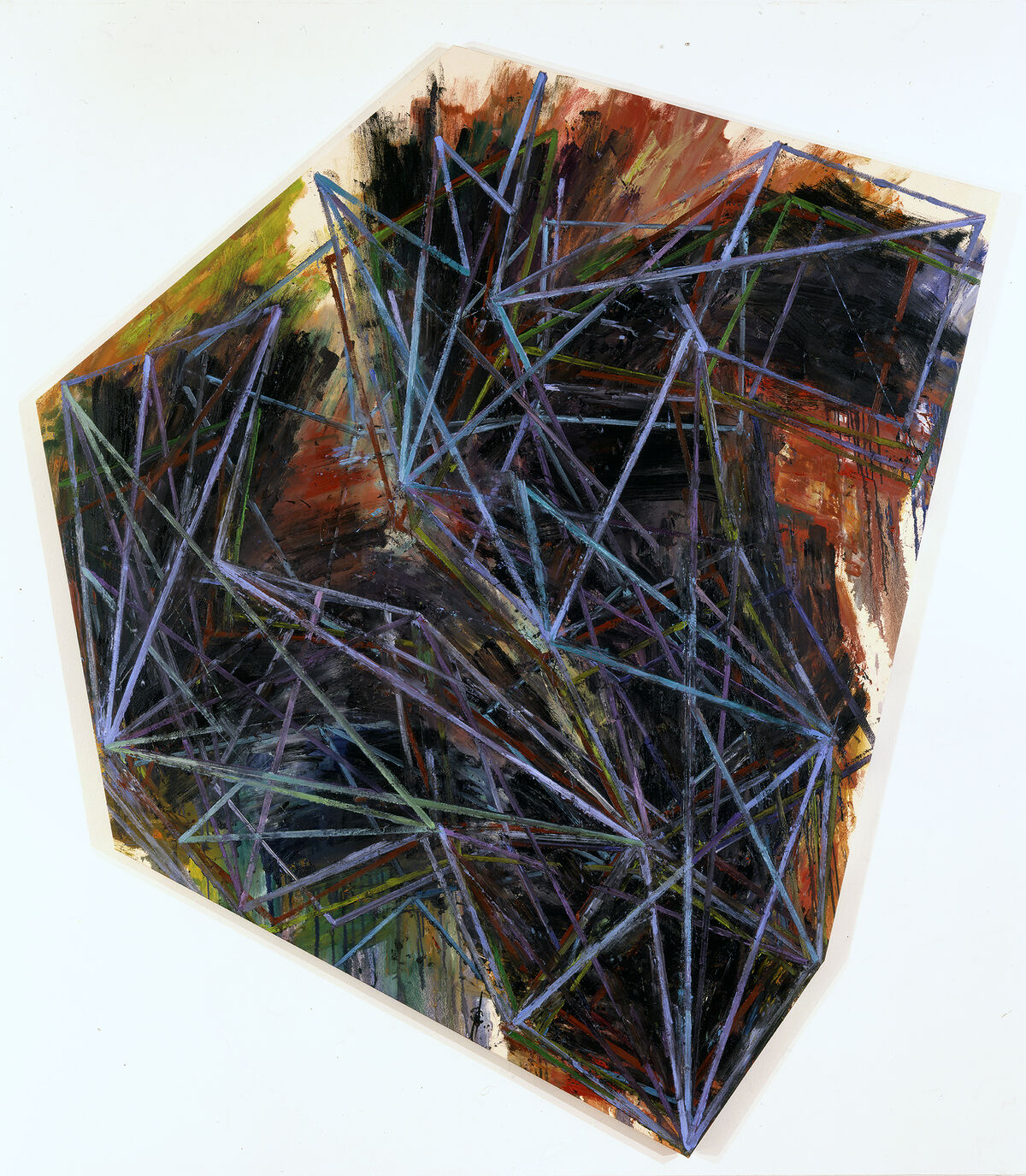 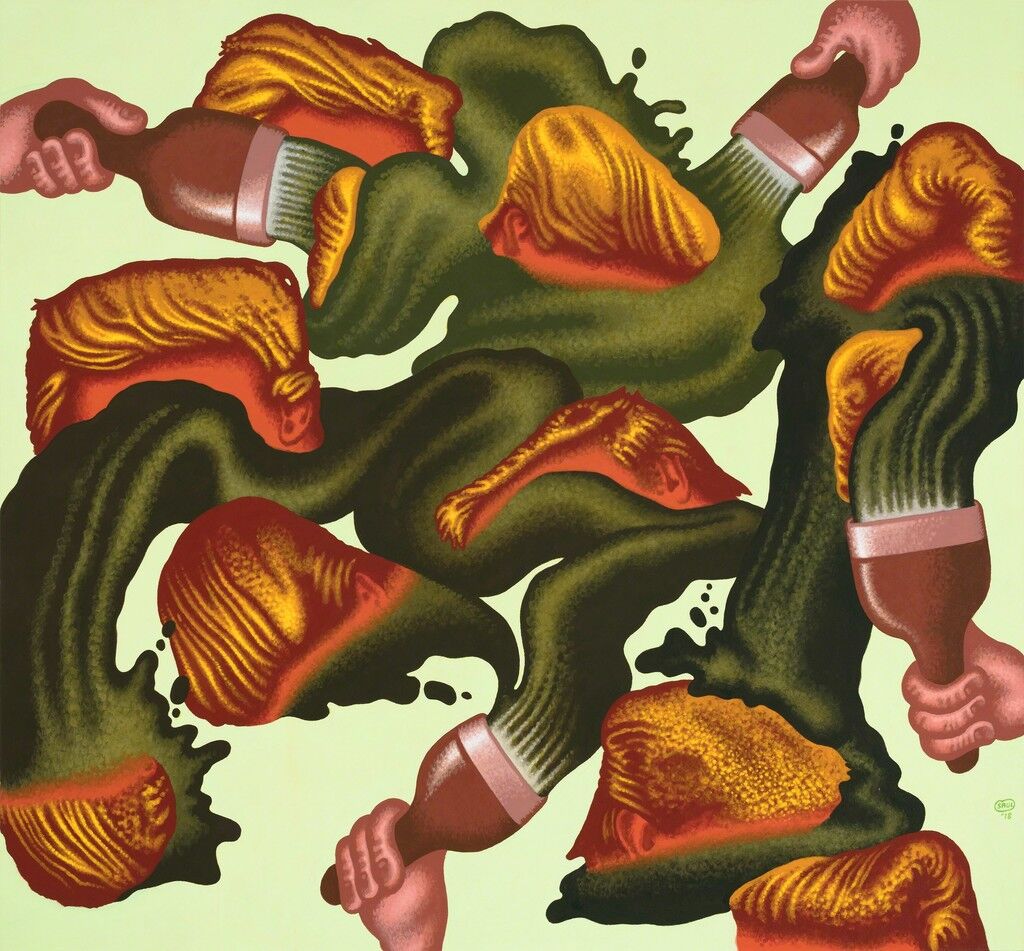 Peter Saul
“Abstract Expressionist Portrait of Donald Trump”, 2018
Michael Werner Gallery
Advertisement
By and large, sales were slow to come in during The Art Show’s first hours, but San Francisco’s Berggruen Gallery—one of the ADAA’s original members—managed to find a buyer for
Kehinde Wiley
’s Portrait of Dacdjo Ndie Joseph (2015) for $200,000—no doubt taking advantage of the artist’s swell in popularity since the unveiling of his portrait of Barack Obama earlier this month.
“It’s a painting we’ve had for a little while, but the timing of it does enhance things,” said Gretchen Berggruen, who runs the gallery with her husband John. “We didn’t have to run out and get a Kehinde just to look like rock stars.”
Peter Freeman, Inc. had sold a pair of
Mel Bochner
paintings from the 1980s—works stretched onto oddly shaped frames after they were painted—for $195,000 each.
Mary Heilmann
’s Orbit (1978) sold for $350,000 from 303 Gallery’s stand. Pace Gallery sold three
Tony Smith
sculptures ranging from $200,000 to $400,000 apiece. And Sean Kelly Gallery sold several
Jose Dávila
works for between $18,000 and $45,000.
David Nolan Gallery brought a striking set of new large-scale works by
Wardell Milan
—drawn-on collages of nudes frolicking between bursts of taped-on colors. All but one of the works on offer sold for $40,000–50,000 during the opening gala.
Elsewhere, some early bird collectors strolled through to get a glance at a variety of pricy work on the walls, such as a
Sean Landers
solo booth put up by Petzel. The artist had his large-scale notebook-lined paintings for sale for $130,000. David Zwirner mounted a salon-style hang of a variety of artists from its 25 years in business, all of them crowding into the characteristically small environs of ADAA booths. There, prices ran the gamut from $8,000 to $850,000.
And at the Hauser & Wirth booth, a bucket hat-wearing Woody Allen snaked between sculptures by
Hans Arp
, making a rare public appearance since the #MeToo movement and allegations of his abuse have forced actors to speak up on whether they would work with him again. 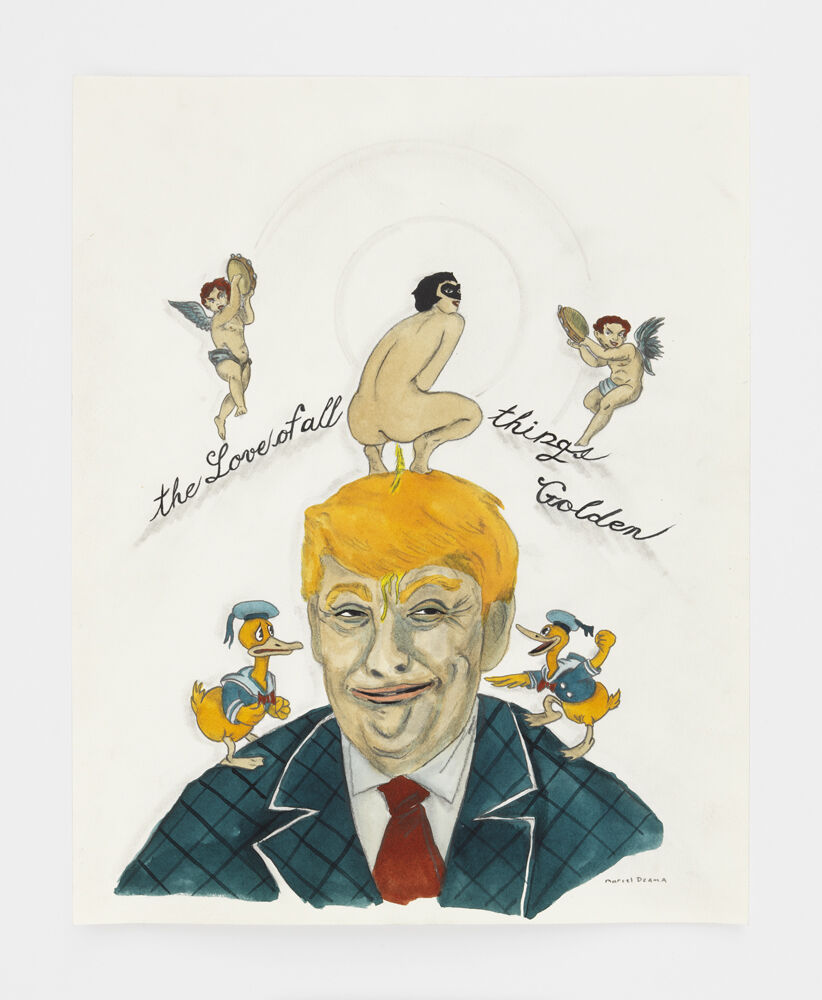 Marcel Dzama
The love of all things golden, 2017
David Zwirner 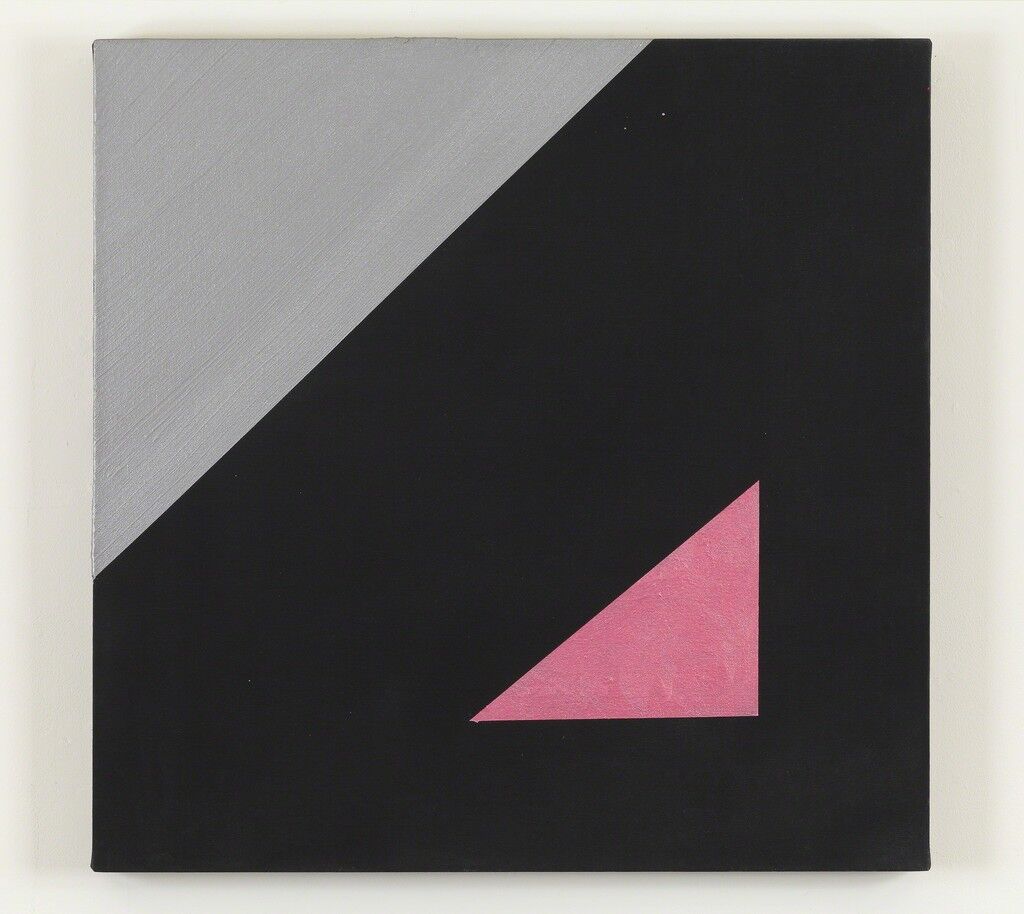 Mary Heilmann
Orbit, 1978
303 Gallery
If there was any doubt as to whether the uptick in the amount of political art shown at fairs in 2017 would continue into the new year, a strong political thread soon squashed it at The Art Show. A drawing of Donald Trump by
Marcel Dzama
, The love of all things golden (2017), hung within Zwirner’s free-for-all, displaying the President’s visage bearing a grin as a nymphette in a masquerade ball mask calmly defecates on his golden locks.
The presidential pate also made an appearance in Michael Werner Gallery’s booth, where new work on offer by
Peter Saul
included a glorious painting entitled Abstract Expressionist Portrait of Donald Trump (2018), with a series of paint strokes depicting his hairpiece, disembodied from the man and floating around.
“Peter said it’s going to be his last one of Trump,” said gallery director Birte Kleemann, with a bit of a sigh, as if to imply: But the world needs more!
She went to go get a statement from Saul describing the work: “They’re trying to paint Trump’s likeness, but they’re not getting much further than his hair.” The artist himself then walked up to the booth and looked at the work admiringly.
“How wonderful,” he said. “They fit!”
Nate Freeman
Related Stories