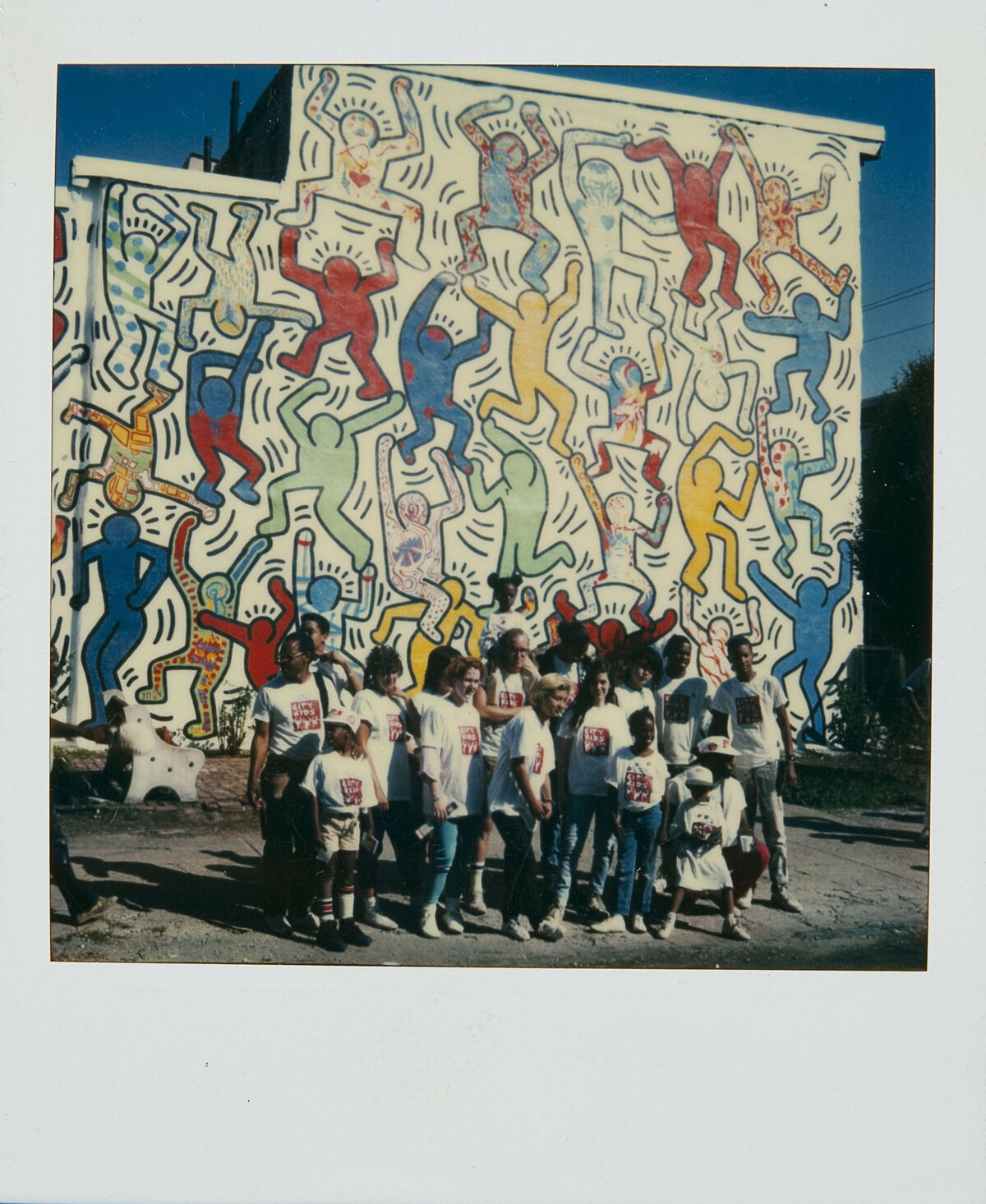 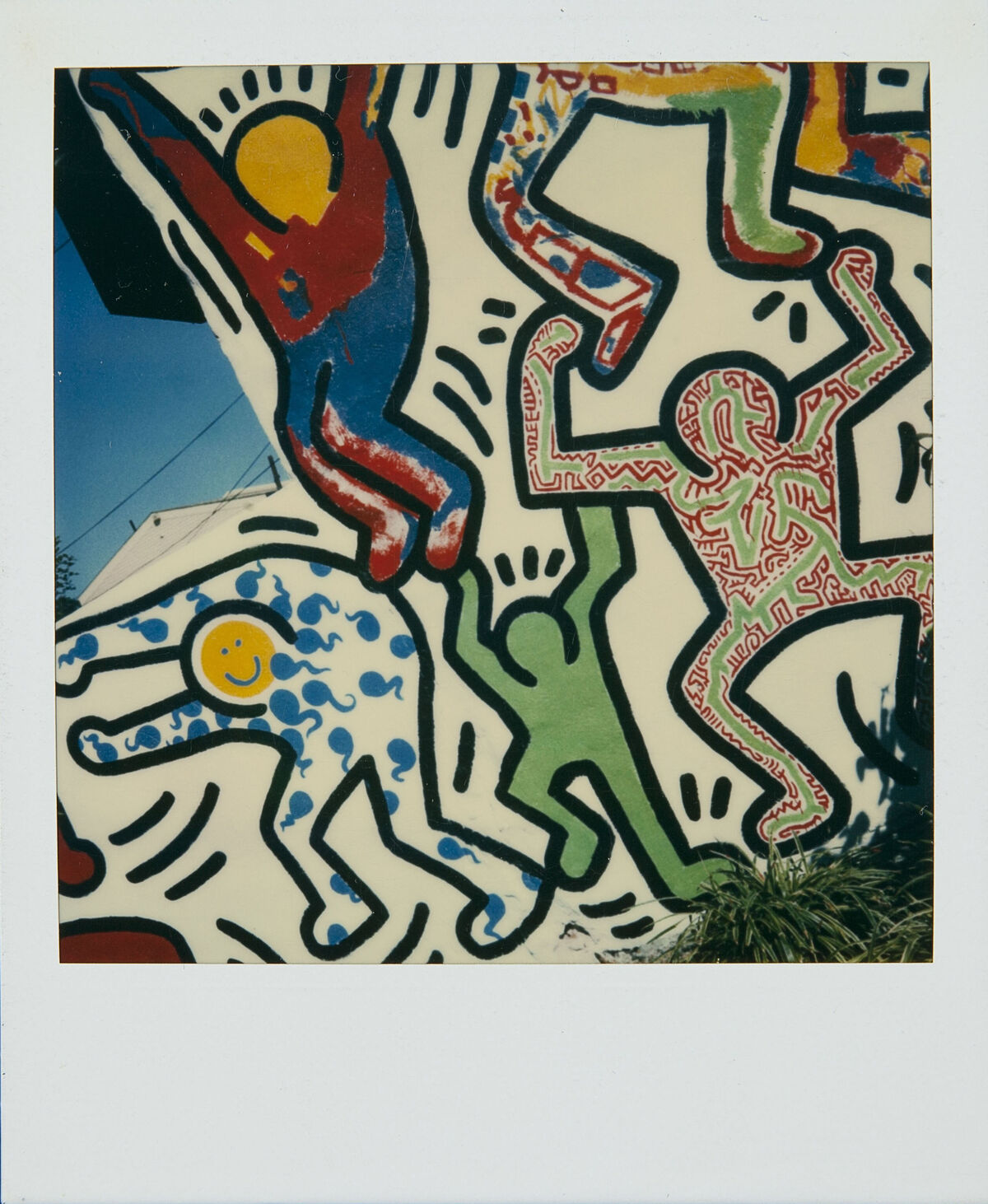 Chalk was the medium that made pop artist
Keith Haring
famous. The short-lived drawings he sketched on blank posters throughout the New York City subway had surprisingly long-term effects on his career, boosting widespread recognition of his tessellating figures that appealed to art connoisseurs and children alike.
And so, it follows that he was no stranger to temporary art. Haring knew that even his murals—close to 50 in total, scattered across the globe from Tokyo to Minneapolis—were subject to the same sort of impermanence.
“I realized, of course, that when you put something in public that it is in a certain way a gift,”  Haring said in an interview about his Houston Street mural in New York. “It’s vulnerable to whatever is going to happen to it from the outside world.”
That vulnerability was the intention for We the Youth, a collaborative mural the American artist created in Philadelphia in September 1987. The work, which marks its 30th anniversary on Sunday, was always meant to be temporary.
It was also Plan B. Plan A was for Haring to paint a mural on a trash truck that would drive around Philadelphia, bringing art—and sanitation services—around town. The Philadelphia Sanitation Department refused to lend a truck for that purpose, however, so the project organizers came up with another idea.
Haring was instead invited to Philadelphia by representatives of two multicultural art nonprofits that work with urban youth: Allan Edmunds, founder and director of Philadelphia-based Brandywine Workshop, and Laurie Meadoff, founder and director of the New York-based CityKids Foundation. Meadoff had collaborated with Haring the previous year on CityKids Speak on Liberty (1986), a 90-by-30-foot banner that the artist volunteered to paint with approximately 1,000 children in celebration of the Statue of Liberty’s centennial.
We the Youth was another pro bono collaboration between Haring and urban kids, in a project that commemorated a different American milestone. Timed to coincide with the bicentennial of the U.S. Constitution on September 17th, Haring created the mural with a group of high school students (six from New York, eight from Philadelphia) and assistance from three local artists (Clarence Wood, Gilberto Wilson, and Jose Seabourne). The artwork would not enjoy the premier placement of the official festivities planned for Philadelphia’s Independence Hall, but its unceremonious location was intentional.
“Keith Haring didn’t want to put this mural in a part of Philly that everyone saw all the time, one of the trendier, more commercial parts,” recalls Rita Martello, a Seattle-based web designer who was among the mural’s student collaborators in 1987. “He wanted to put it in an actual urban neighborhood.”
The neighborhood selected was South Philadelphia’s Point Breeze, where We the Youth hoped to shine the spotlight of Haring’s commercial success on the urban blight of a low-income area. Painted on the side wall of a rowhouse at 2147 Ellsworth Street, the mural faced a vacant lot—one of hundreds that dotted the neighborhood at the time. (In a letter to Haring that year, Edmunds of Brandywine Workshop counted 900.)
The project organizers expected the mural to be a placeholder until redevelopment actualized the area’s potential—not for it to be around for decades. “We didn’t paint that with the idea that it was going to be there 30 years,” says Edmunds. “This is the whole point: It wasn’t about putting murals all over the city, and monuments to the artists. It was about sparking community, economic, and social development. So progress is when a building gets built on that lot,” he says—progress that would, inevitably, turn Haring’s mural into a shared wall between two rowhomes.
Despite the absence of new construction and repopulation of the dilapidated district in the years preceding We the Youth, there were nevertheless several active community organizations and residents trying to improve the area. Point Breeze neighborhood associations and businesses cooperated on the mural by providing supplies and other support.
“There was curiosity and excitement about the project,” says Judy Kim, a Philadelphia-based designer who filled in one of Haring’s outlined figures as a 16-year-old high school art student. “Children would ride by on their bikes circling the mural, smiling, laughing, and pointing at the details. Some of the neighbors would come out to take a look and seemed undecided about the mural and how the artwork fit in the neighborhood. This was when the mural was new, but I’m sure things have changed since then.” 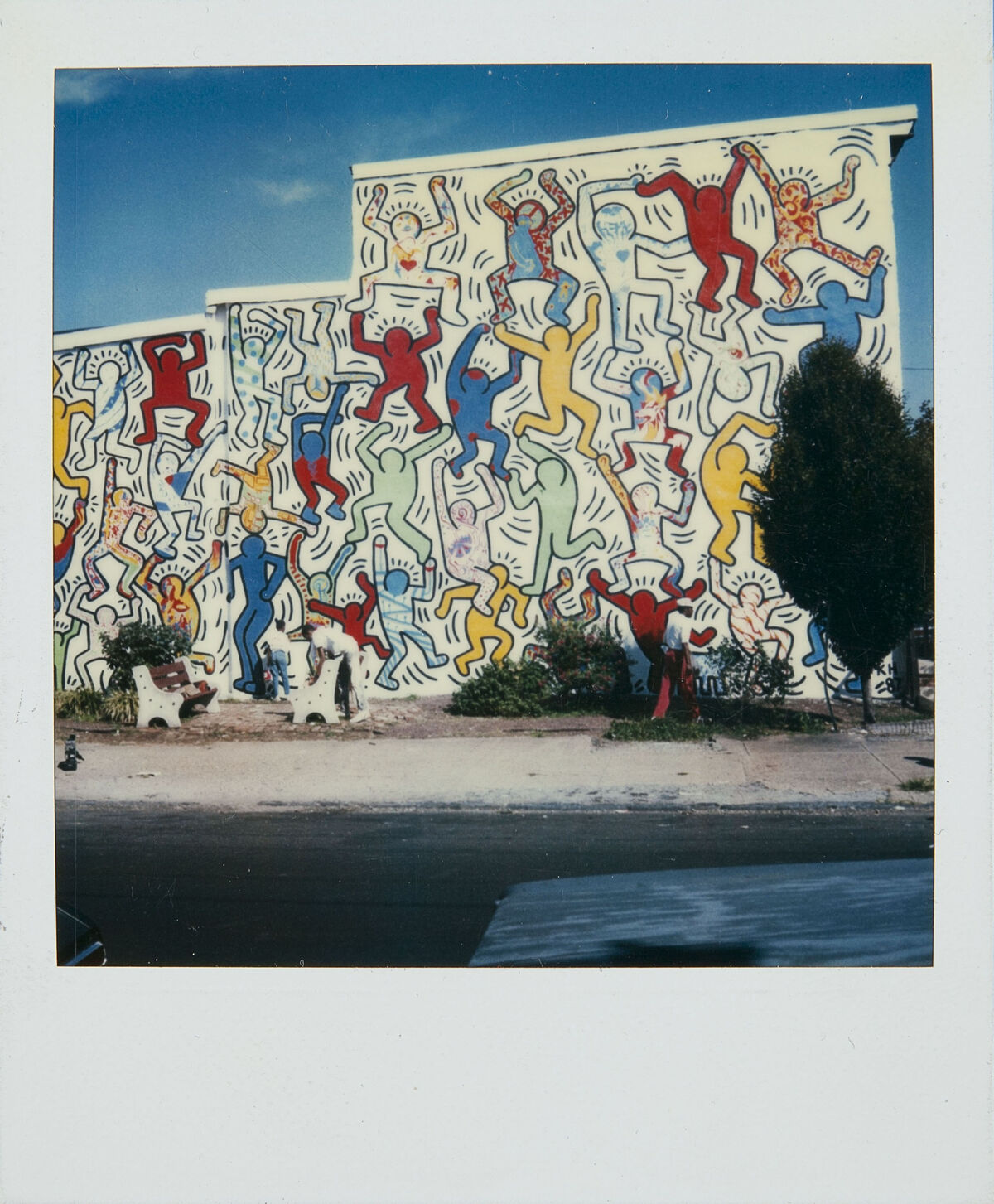 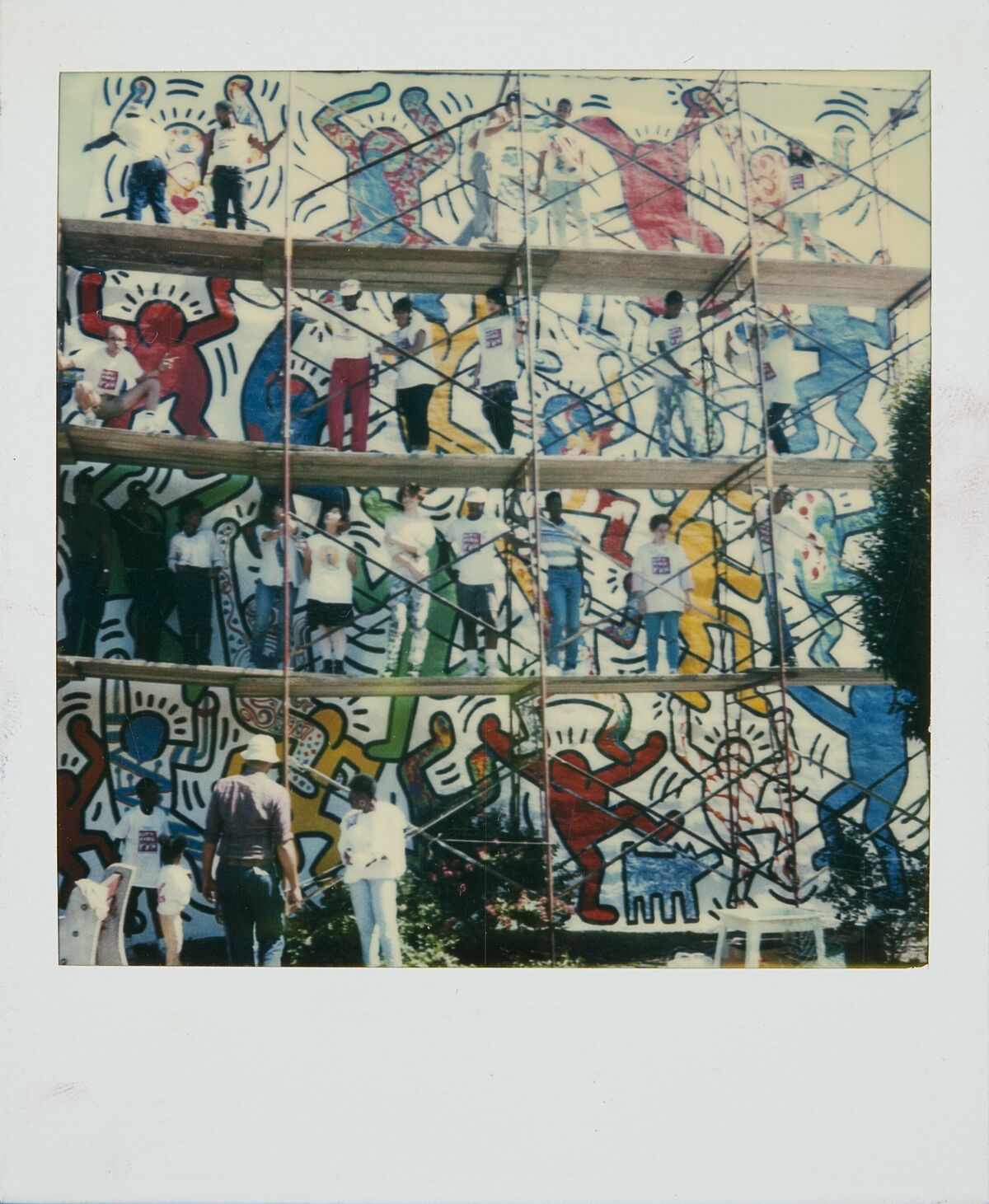 Point Breeze has indeed changed over the past 30 years, and a gentrification process has begun filling many empty properties over the past decade—although a 2009 city report still notes the presence of 1,991 vacant lots in the area. Newer residents in particular have a heightened awareness of the significance (and monetary value) of Haring’s work, so the corner lot at 22nd and Ellsworth Streets won’t likely be one of them.
“People just didn’t realize the value of it,” says Eric Okdeh, a muralist who has painted over 80 projects in Philadelphia and who restored We the Youth twice, in 2000 and 2004. “I wouldn’t say that across the board, but I do remember that feeling where some people didn’t realize that he was an artist of international renown and that this piece existed in the neighborhood.”
And to those outside the neighborhood, the address of Philadelphia’s Haring mural certainly remains a mystery. It is a hidden gem, an under-publicized anomaly in a city whose Mural Arts Program boasts the nation’s largest public art collection. Its location is partially to blame—most of the city’s high-profile murals adorn the walls of Philadelphia’s heavily-trafficked Center City. It was also a small project within the context of Haring’s oeuvre. Just the year before, he famously painted a 300-meter-long section of the Berlin Wall (a project that, like We the Youth, was intended to be impermanent).
Like that portion of the Wall, many of his murals have been destroyed, painted over, or relocated in the years since his untimely death due to AIDS-related complications. Only a handful of outdoor Haring murals still exist in their original locations, mainly in prominent locations: the exterior wall of an Italian church, a Parisian children’s hospital, and on a handball court wall visible from Manhattan’s Harlem River Drive. Eleven Haring murals remain in the United States, but Philadelphia’s mural wasn’t supposed to be one of them.
The survival of We the Youth is bittersweet. It has become a museum-level fixture in a neighborhood that is accustomed to boarded-up rowhouses and lots overgrown with weeds. The mural is now a permanent placeholder for a house that will, apparently, never be built, and its original message of community improvement has been lost over the years.
Created to enjoy a short life, We the Youth has survived in spite of itself.
Karen Chernick
Related Stories