David Salle, Mingus in Mexico, 1990. Courtesy of the artist and Skarstedt Gallery.

It’s only natural to desire a simple, straightforward narrative. Artworks (and people) that seem to proffer easy interpretation, then deny any satisfying conclusion, are eminently frustrating. For over 40 years, the artist
David Salle
has been making work—and giving interviews—that deny tidy conclusions.
Though Salle began exhibiting in New York in the 1970s, it was his association with Mary Boone that launched his career. The gallerist first displayed his work in a 1980 exhibition alongside that of painters
Julian Schnabel
and
Ross Bleckner
. New York’s critical and financial attention fixated on the trio throughout the rest of the decade.
A widely accepted story developed: the so-called “return to painting” in the 1980s. The Whitney Museum played on this trope when it organized last year’s “Fast Forward: Painting from the 1980s.” Tate Modern operated on similarly reductive assumptions in its 2008–09 exhibition “UBS Openings: Paintings from the 1980s.” Both shows romantically posited a decade-long surge in exciting, innovative painting in New York that coincided with an eager, receptive market. The shows alternately grouped together such disparate artists as
Mary Heilmann
,
Jean-Michel Basquiat
, and Salle himself.
Salle, however, disagrees. “I don’t put a lot of store into art world narratives,” he tells Artsy. “People aren’t very observant. They like to repeat stuff that sounds provocative.” He admits there was a “tremendous shift in emphasis” during the decade, that socio-economic changes during the 1970s led to something in the 1980s, though he doesn’t quite articulate what that is. Salle is content with the slight contradiction.
While he might normally ignore the art world’s narratives, Salle does take stock in the idea of a “
Pictures Generation
.” In 1977, critic Douglas Crimp organized an exhibition called “Pictures” at Artists Space in Lower Manhattan. In the catalogue, Crimp described our increasing reliance on media images: “While it once seemed that pictures had the function of interpreting reality, it now seems that they have usurped it,” he wrote. A new wave of artists were using found images and photographsin their work to challenge preconceived beliefs about what they signified. The Pictures Generation, which took its name from the show, grew to include such figures as
Cindy Sherman
(who created “film stills” sans films),
Richard Prince
(who photographed magazine advertisements, claiming the results as his own artwork), and Salle himself. 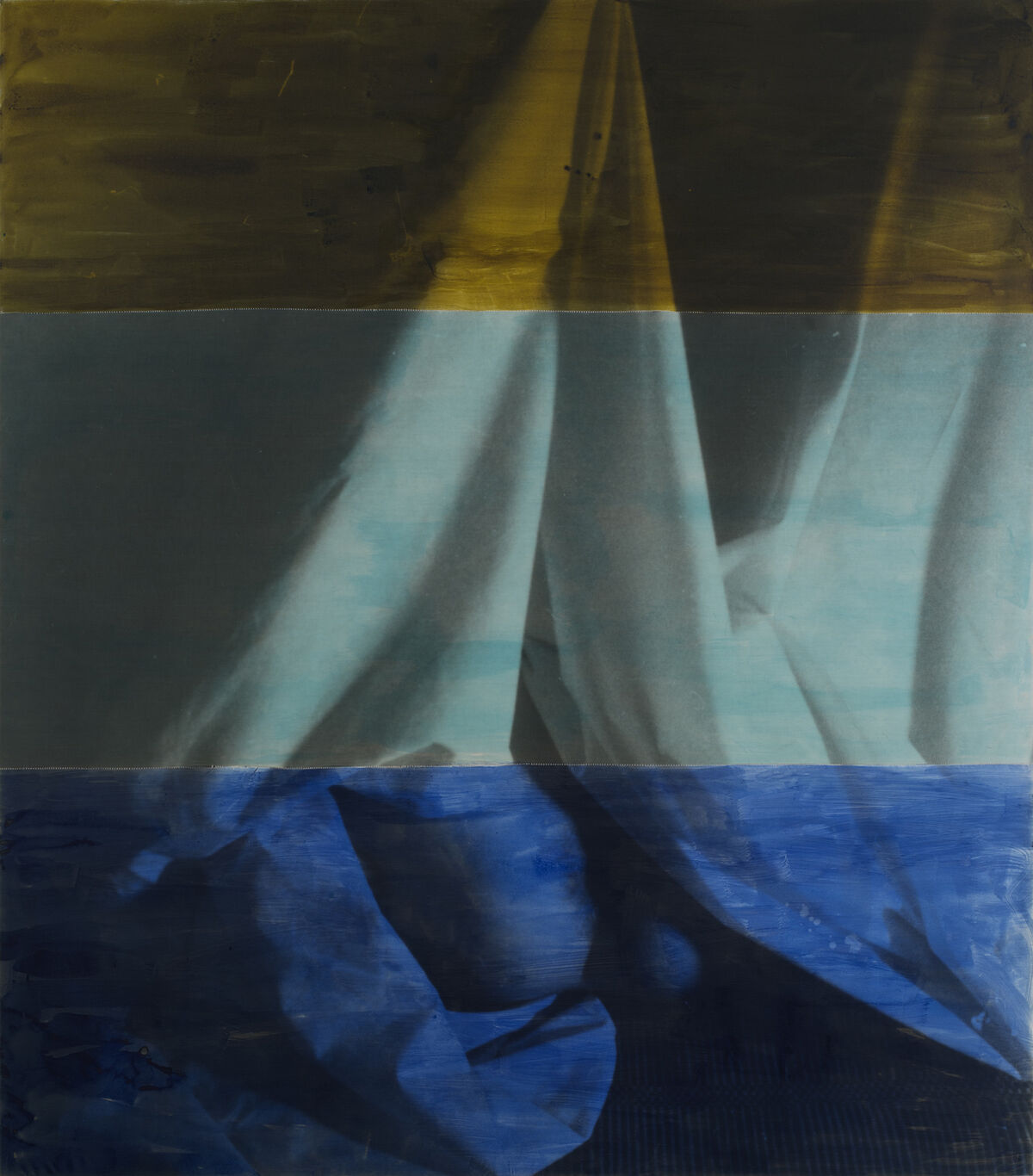 David Salle, Ghost 4, 1992. Courtesy of the artist and Skarstedt Gallery. For the first time in art history, says Salle, a number of artists’ orientation to the visual world was “to the page.” He and the Pictures Generation took after
Andy Warhol
and the
Pop artists
as they manipulated popular media for their own work. Like Prince, Salle briefly worked at a magazine company in the 1970s. “There wasn’t a single photographer on staff,” he recalls. Instead, they used “slightly campy stock photographs.” These shots were increasingly devoid of meaning; when the magazine shuttered, they literally became trash.
After he left the publication, Salle himself “quoted” found images and other artists’ styles in his paintings, offering little to no hint of where he got them. The obscured sources could turn the works into impossible guessing games.
Take Old Bottles (1995), for example, which is on view at Skarstedt Gallery through June in a new exhibition surveying the artist’s work from 1985 through 1995. Attempt to reconcile, without floundering, the collaged pictorial elements that make up the painting: clenched fists; cups and bottles; butterflies, snowflakes, a train, the backs of two women. Hypothesizing where these images are from, and what they mean, becomes an infuriating exercise. Salle himself has suggested it’s more fruitful to look at a painting’s structure, rather than its component parts. Still, it’s easy to get stumped.
The Skarstedt exhibition highlights works from not just the decade with which Salle is most associated, but from the 1990s, as well. “Life continued after the 1980s, as inconvenient as that might be for some people,” the artist says (he kept painting, disregarding claims that his heyday was over—indeed, he’s still making and exhibiting new work today). 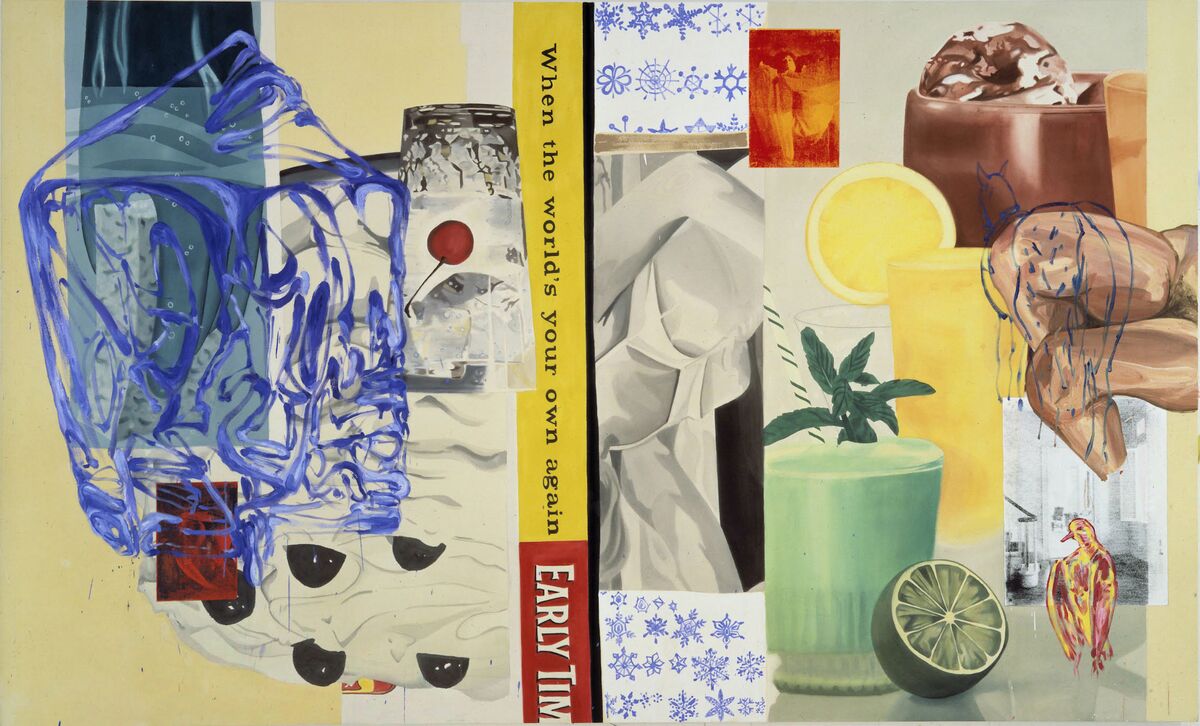 Advertisement
During the late 1980s, Salle turned to new sources; collaborations with the American Ballet Theater generated crucial material and ideas. Salle created costumes and sets for a Mikhail Baryshnikov ballet and a number of other productions choreographed by Karole Armitage (the pair were also romantically linked).
Indeed, a sense of theatricality pervades the works on view at Skarstedt. The depicted folds in Ghost (1992) resemble those of a fallen curtain. It’s divided into three bands of color, suggesting the typical three-act structure of a stage production. Open Boat, from the same year, has the feel of a dark prop closet filled with objects incoherently discarded and jumbled together, seen outside of their original contexts (an apt metaphor for much of Salle’s painting). Like Stephen Crane’s 1897 short story of the same title, which explored the unknowability of the natural world, the painting suggests that interpretation is probably futile.
Salle’s engagement with the performing arts, combined with his predominant interests in simultaneity and juxtaposition, eventually found a natural outlet in film. In 1995, he made his directorial debut with Search and Destroy, a movie about an aspiring filmmaker that featured Dennis Hopper, Rosanna Arquette, and Christopher Walken. Salle had been editing and splicing images together for years; now he was doing the same with live action reels.
The title of Salle’s painting Final Cut (1993) evokes the language of cinema. The vertical bar at the center neatly divides the canvas as though into two still frames. The painting has a sun-drenched, pop-infused look to it, the central text derived from a whiskey ad. With its light tones, depictions of cool drinks, and identifiable source material, the painting is perhaps the most inviting in the show.
There’s a spooky, chilly aura to the others. The most disturbing may be Fooling with your Hair (1985): In three distinct sections within the painting’s lower half, the viewer sees pictures of a woman in compromising positions on a thin table, unclothed from the waist down (except for a pair of shoes). The emphasis on light and shadow reminds us that these representations derive from black-and-white photography. The scenes look staged, eerie, repellent, and ultimately anti-erotic. 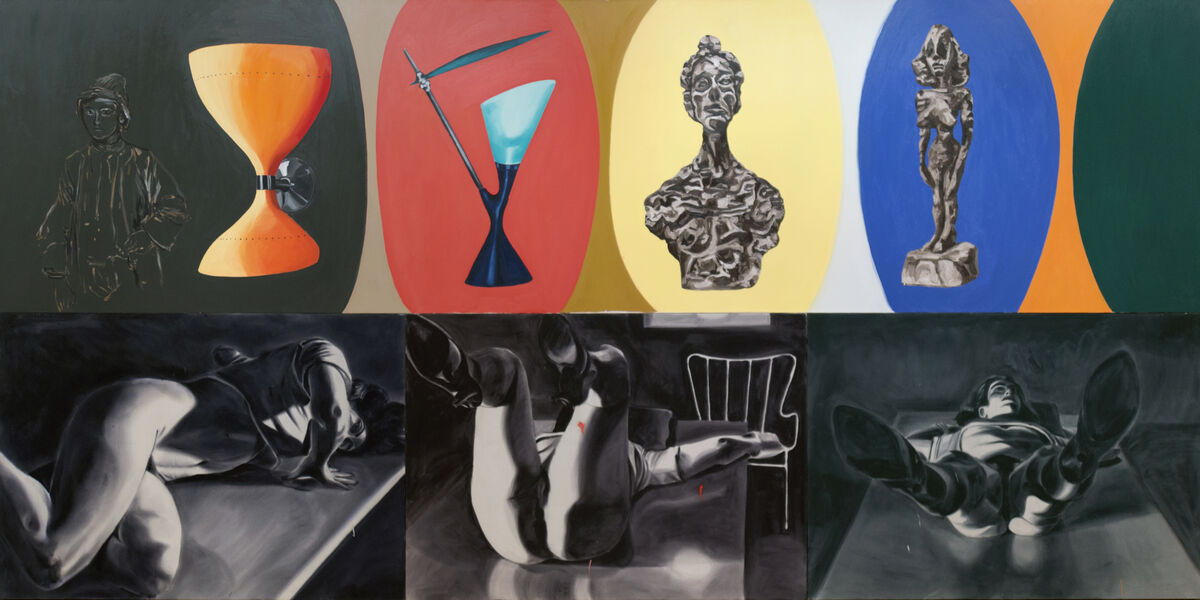 David Salle, Fooling with your Hair, 1985. Courtesy of the artist and Skarstedt Gallery.

Such depictions of women (or, depictions of photographs of women) have garnered Salle plenty of vitriol. In defending these works, he returns to his ideas about theatricality and his engagement with the ballet. He describes “directing a performer to occupy space in a certain way,” suggesting that he’s truly critiquing his photographic process, not women themselves.
Critics, including artist
Mira Schor
, weren’t accepting of such rationales. In a 1986 essay, Schor asked why Salle hadn’t “drawn and quartered” male nudes in the same way as he had female nudes. “Salle uses woman as a metaphor for death; woman has become a vehicle for the difficulty of painting,” she wrote. She criticized his supporters such as writer Carter Ratcliff, who had depicted Salle as “a self-conscious pornographer, one capable of embarrassment.” For Schor, that presented the artist as “a repentant rapist” who could be excused from culpability. Salle’s work, Schor suggested, invoked an exclusively male spectator.
Over the next few weeks, viewers will be able to judge for themselves. Salle himself hasn’t seen many of these paintings for decades, and even he’s not sure how they will fare. What matters to him is whether they still appear alive and vital. As for the show’s overall reception, the artistdoesn’t seem too worried. “It’s difficult to talk about the art world as a whole entity because it’s so fragmented,” he says. “You can’t really find six people to agree about anything.” Perhaps that, for Salle, is also its appeal.
Alina Cohen
Related Stories

Julian Schnabel on Why Painting Is Freedom 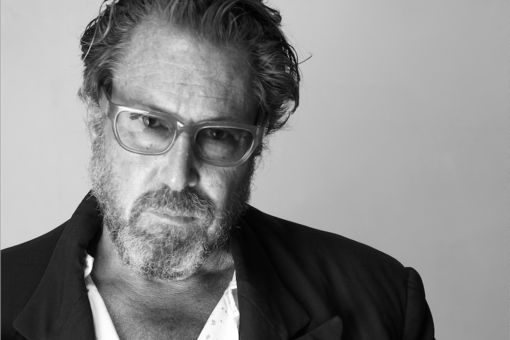 Julian Schnabel on Why Painting Is Freedom
Emily Nathan
Oct 30, 2015