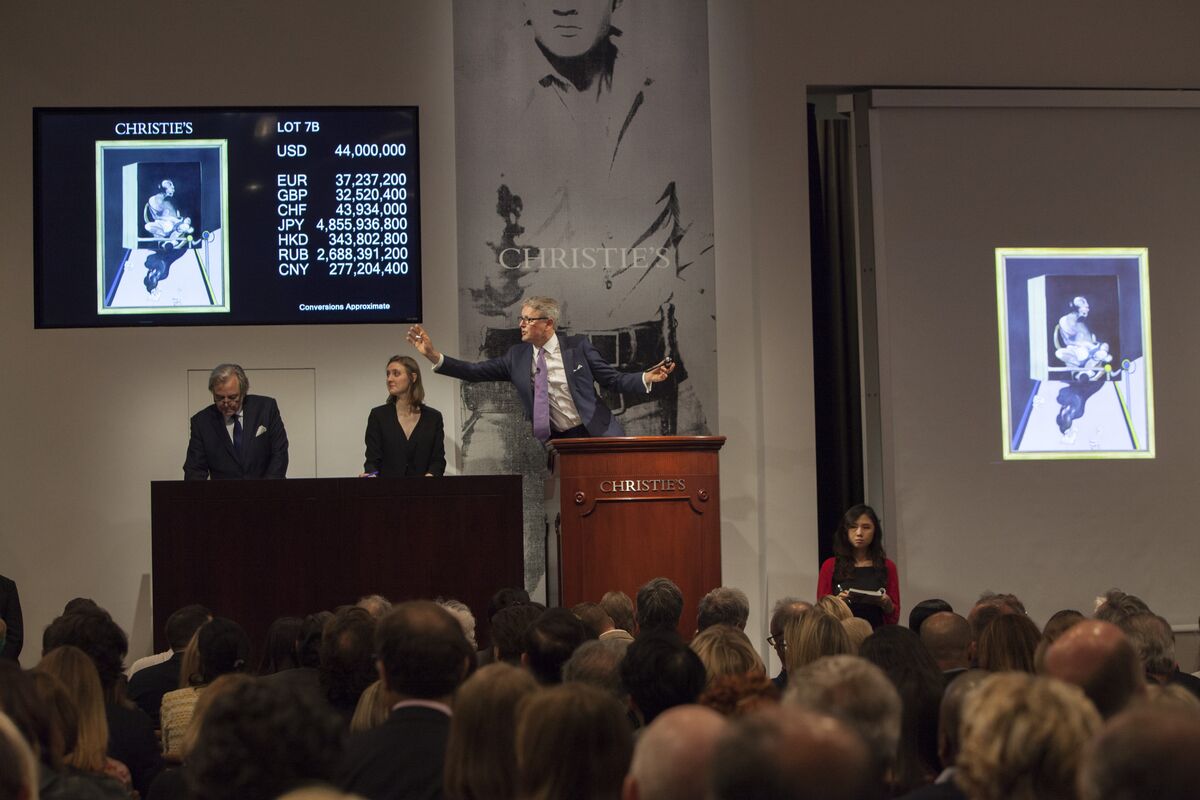 With a selection of 64 lots, Christie’s post-war and contemporary sale energized its Rockefeller Center salesroom Thursday night, sparking multiple bidding wars for a $397.1 million sale with a 91 percent sell-through rate.
The total was an 11 percent fall from last May’s sale, which logged $448 million. But a blockbuster
Francis Bacon
, along with vigorous bidding en route to new records for
Richard Diebenkorn
and
Joan Mitchell
, signaled that the bellwether New York evening sales had ended on a high note.
The sale featured the most expensive work of contemporary art to sell this season, Bacon’s Study for Portrait (1977), which achieved $49.8 million with fees, hammering at $44 million—a hefty amount over its pre-sale estimate, which was $31 million.
It was the subject of one of this week’s rare extended bidding wars for a high-priced work; most of the others had sold to their guarantors or after one or two half-hearted bids, such as
Pablo Picasso
’s Fillette à la corbeille fleurie (1905), which sold to its guarantor during last Tuesday’s evening sale of work from the collection of Peggy and David Rockefeller, or
Amedeo Modigliani
’s Nu couché (sur le côté gauche) (1917), which also sold to its guarantor at Sotheby’s on Monday.
That trend largely continued at Christie’s on Thursday, with few takers for the priciest works.
Andy Warhol
’s Most Wanted Men No. 11, John Joseph H., Jr. (1964) had one bidder and hammered at $24 million below a $30 million estimate—it earned $28.4 million with fees—and
Mark Rothko
’s No. 7 (Dark Over Light) (1954) also had a single bidder from the guarantor, and hammered at $27 below a $30 million estimate, or $30.6 million with fees. And after all the hype about
Jeff Koons
’s gigantic sculpture Play-Doh (1994–2014), it attracted just a few bidders and sold to the artist’s dealer, Larry Gagosian, for a $20 million hammer, exactly the estimate. 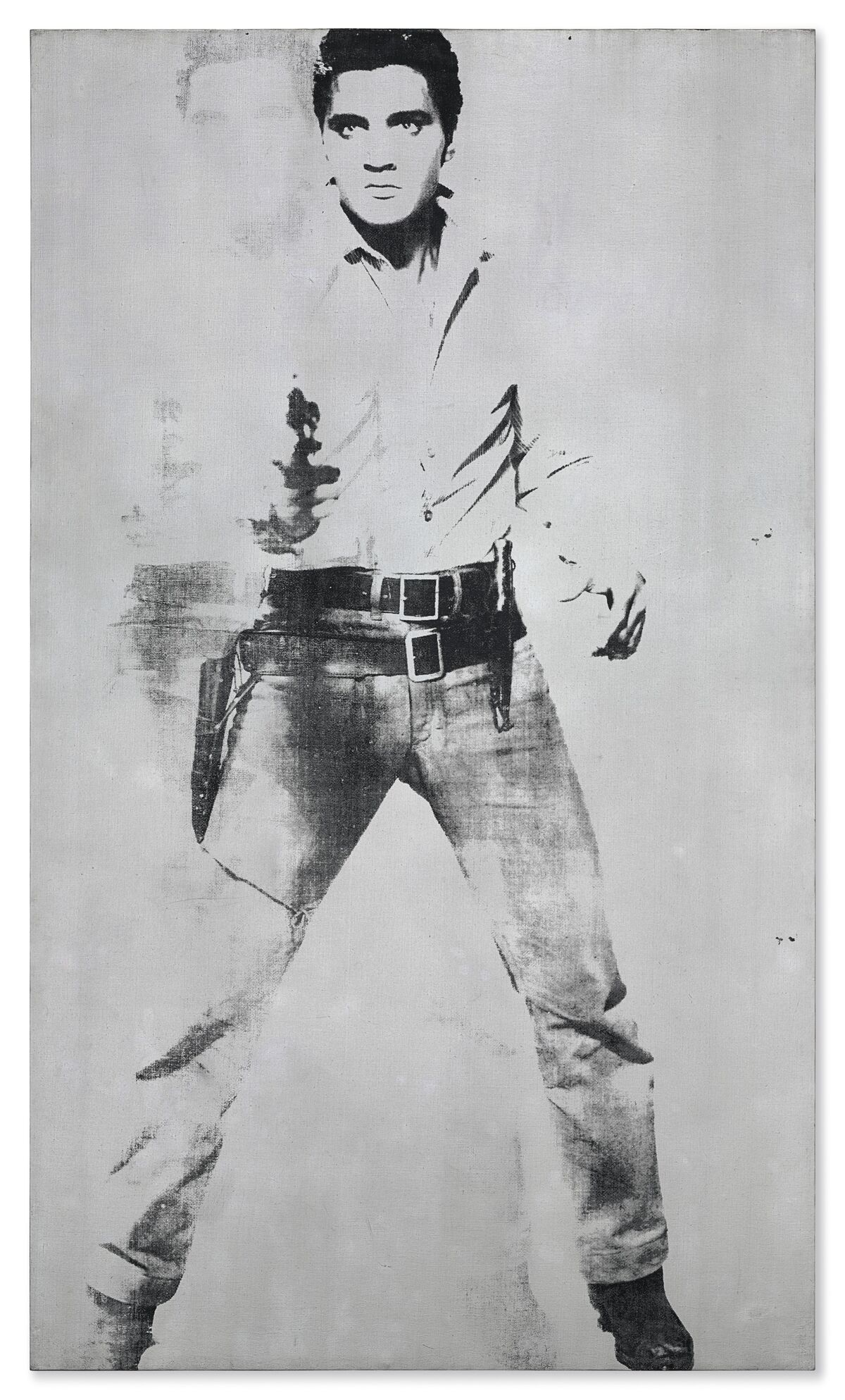 Sara Friedlander, head of the post-war and contemporary department at Christie’s, said the lack of fireworks on big lots is actually just an indication the market is stable.
“We priced things based on where we see the market, and where we see the interest,” she said. “We’re always happy to be surprised, but we’re also, as specialists, very happy when things go within estimate, because it means we’ve read the market correctly.”
Dealers hoped that Thursday night’s solid results will prime buyers for the next stop on the global art market circuit in June: the Art Basel fair in Basel, Switzerland. It has always been considered the place to present the best work possible, but if the market is truly in a stable place, some dealers anticipate having eight-figure works to sell on the secondary market.
But Art Basel doesn’t open for a few weeks, and that means, for Christie’s specialists, a well-deserved break. Thursday night signaled the end of a two-week spree of sales at Christie’s, with the key evening sales coming right after a week of offloading 1,600 items from the collection of Peggy and David Rockefeller. Loic Gouzer, co-chairman of Christie’s post-war and contemporary department, said after the sale Thursday that the normal May sales week in addition to the full slate of Rockefeller sales “feels like a 12-round boxing week.”
The long fight paid off. In a press conference after the sale, Guillaume Cerutti, Christie’s CEO, came to a podium and announced that, between the Rockefeller sales and the sales this week, Christie’s had sold art and collectibles worth $1.7 billion in a fortnight, and will hopefully push it closer to $2 billion with the hundreds of lots in the day sales Friday, and sales of American and Latin American art early next week. Advertisement
Christie’s evening sale Thursday came after a (somewhat unexpectedly) buoyant post-war and contemporary sale at Sotheby’s, where the evening’s returns—a $284.5 post-war and contemporary evening sale preceded by the $107.8 million sale of works from the collection of Morton and Barbara Mandel, totaling $392.3 million—was propped up by records for artists with works originally priced in the mid-seven-digit range. These lots saw furious bidding that soon established them as market darlings.
Kerry James Marshall
quadrupled his auction record, and
David Hockney
doubled his.
Christie’s, for the most part, stuck to proven market stalwarts, and, in so doing, out-earned its fierce rival. The second-highest lot of the evening was Warhol’s Double Elvis [Ferus Type] (1963), which was being sold by the embattled former casino magnate Steve Wynn, currently in the process of exiting his company amid accusations of sexual misconduct. According to a Bloomberg report, Wynn has decided to pursue a new career as an online art dealer, even if he is legally blind, and has set up a website for a gallery called Sierra Fine Art LLC. But that new vocation took a hit when two lots he was selling were pulled from Christie’s Impressionist and modern art sale on Tuesday—one because it was accidentally damaged, and the other for an unspecified reason.
The double Warhol he consigned sold for $37 million with fees after hammering at $33.5 million, beating its $33 million low estimate. It sold to Brett Gorvy, the former chairman of the post-war and contemporary department at Christie’s, who left in 2016 to start the gallery Lévy Gorvy with dealer Dominique Lévy.
Gorvy was bidding at the Sotheby’s sale Wednesday, as well, and compared the two house’s strategies. 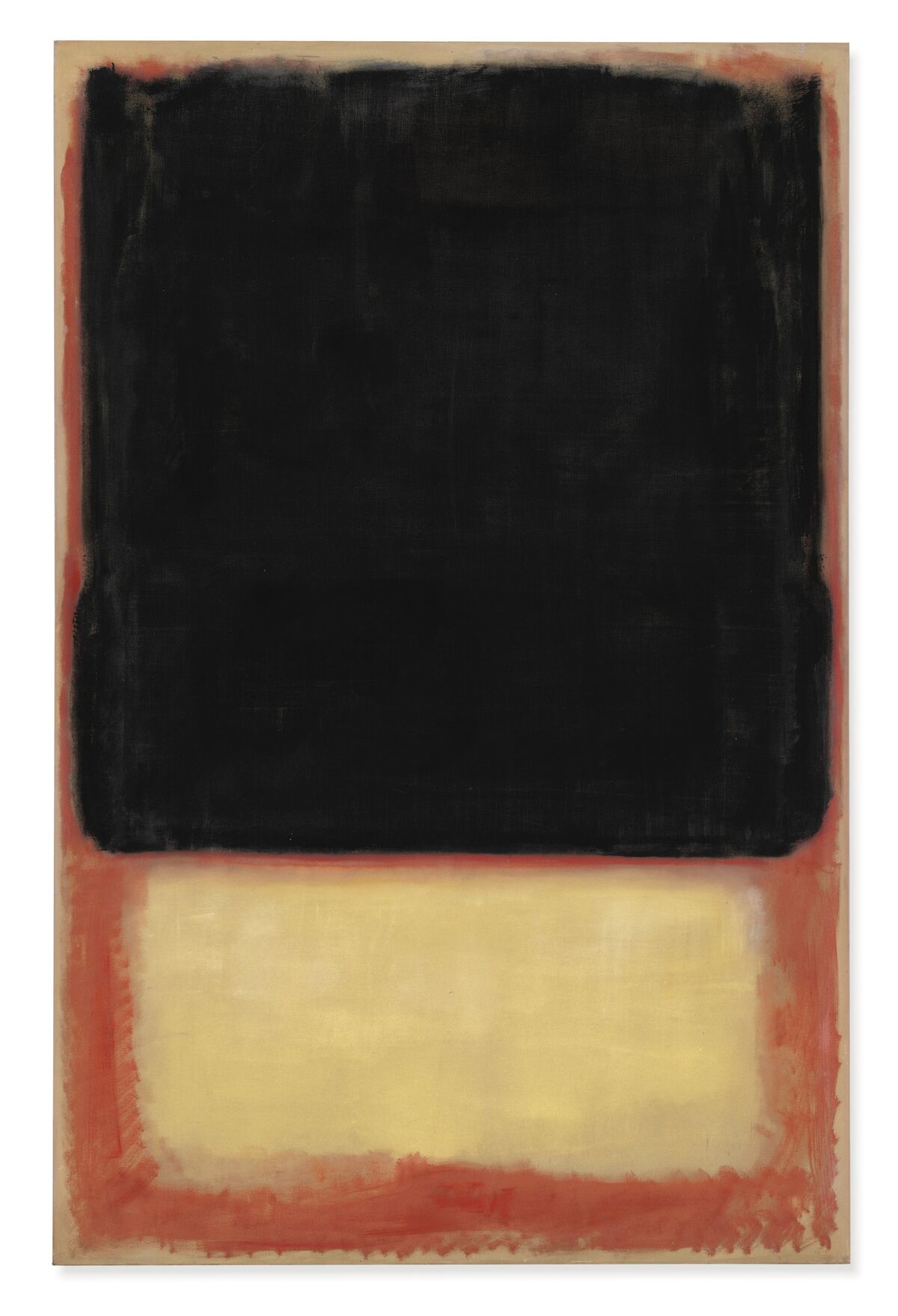 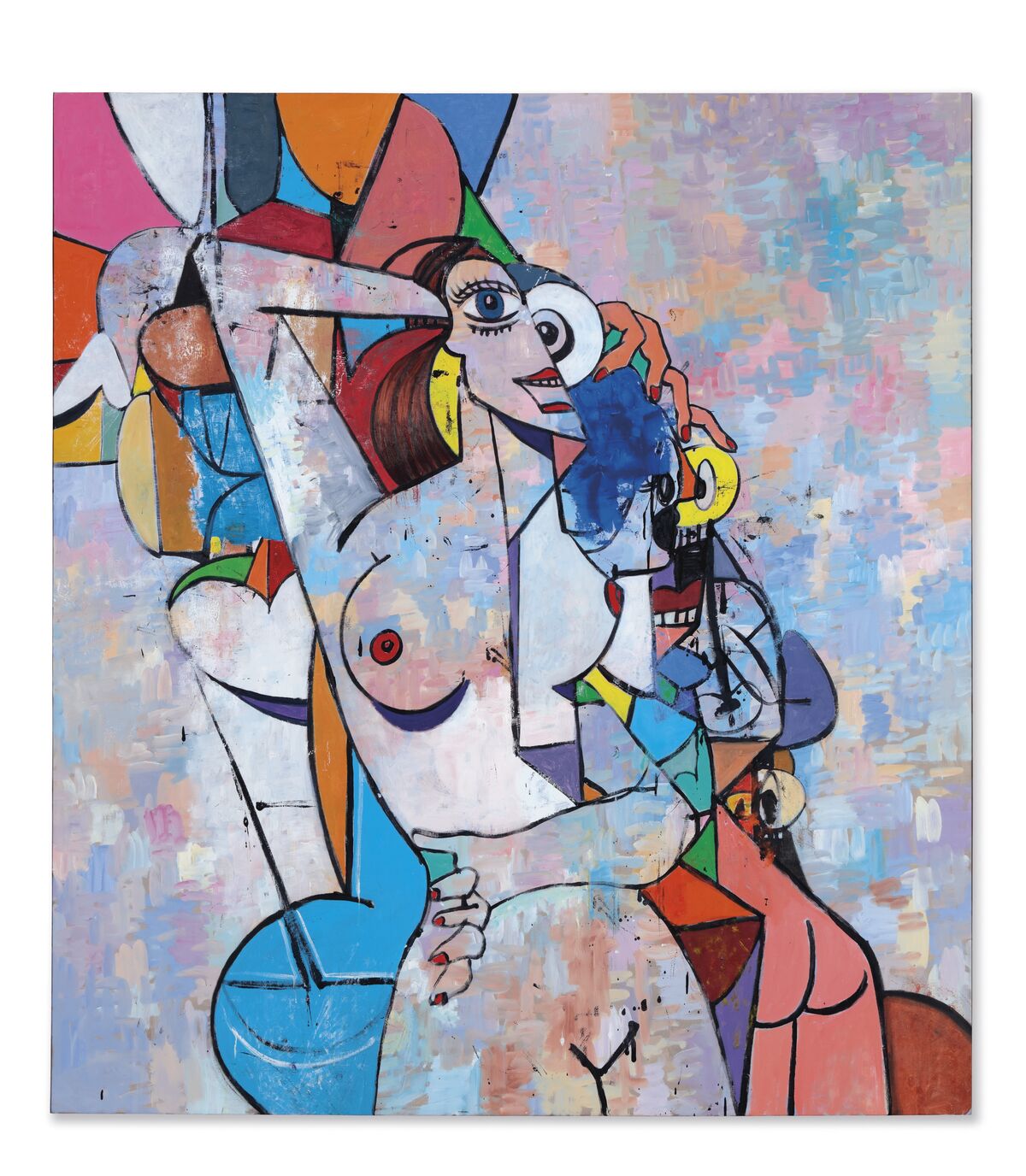 “Most of what sold yesterday was at a value below $10 million, where you can get the strongest bidding,” Gorvy said. “Whereas here, these are established price points. As soon as you get to that level, you have the opportunity to sell to a select few people.”
Two people at that level were going head-to-head trying to secure the Bacon. After auctioneer Jussi Pylkkanen chandelier bid up to $30 million, the proceedings began with a single bid from the room, from Gagosian, but he shook his head when the price got to $31.5 million, prompting a protracted bidding war that erupted from two sides of the sale room between Ana-Maria Celis, the new head of the evening sale, and Renato Pennisi, director of Christie’s Italy.
Celis and Pennisi went up by notches of $500,000, and after passing the threshold of $40 million, each phone bidder, when it was their turn to bid, gave the flat-hand signal for “hold,” imploring auctioneer Pylkkanen to wait just a few more seconds before dropping the gavel, and then both made a last-gasp bids on behalf of their clients. Celis went to $41 million, Pennisi went to $41.5 million, and then, after a long pause, Celis came back with $42 million. Then, Pennisi went to $43 million, potentially securing it, until Celis came back with $43.5 million, which might have secured it—until Pennisi went up one more to $44 million, and it hammered there. After fees, the work had sold for $49.8 million, making it the highest price for a contemporary artwork recorded this week. 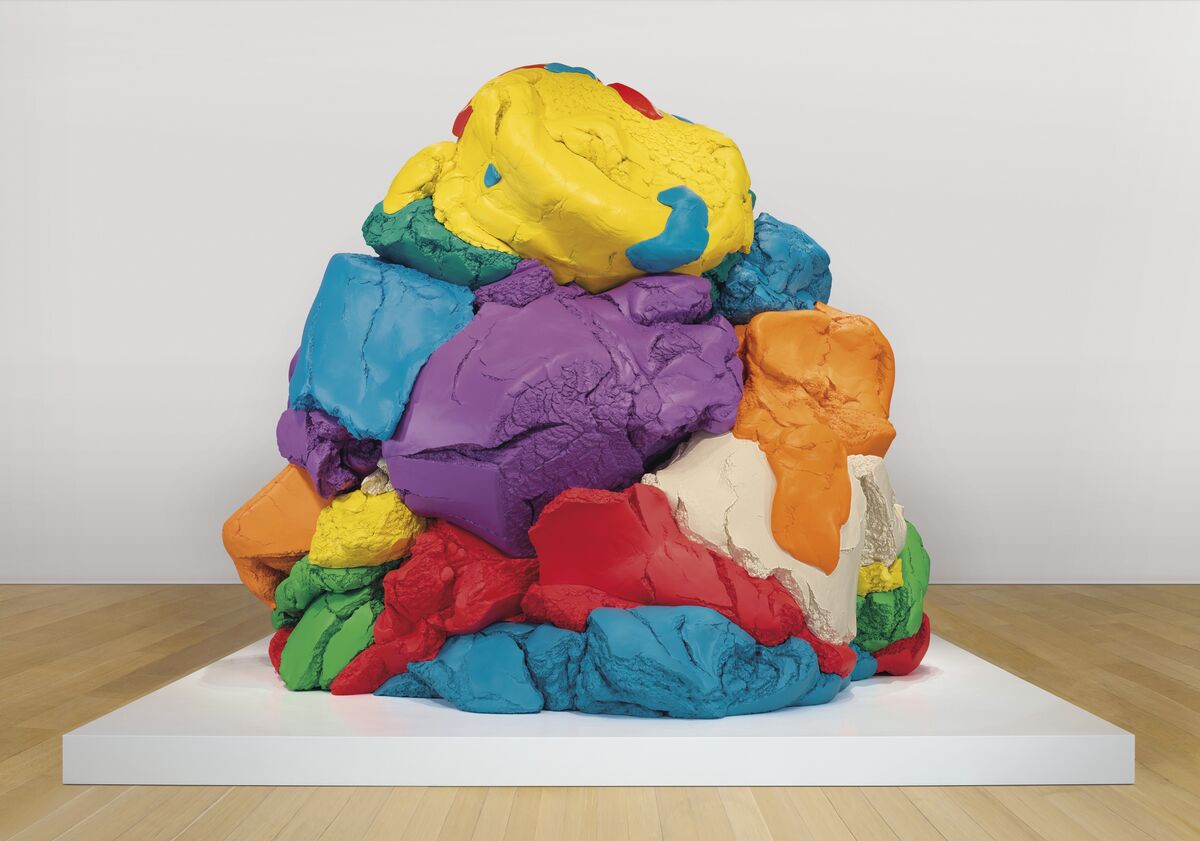 It was not a foregone conclusion that the Bacon would reach its $30 million estimate, or even sell at all, as it was not guaranteed. As Gorvy noted after the sale, “The Bacon market has been tough”—especially when a work by the artist that was supposed to sell at Christie’s in London for a record price last October could not find a buyer and became a hefty pass.
But Bacon is still a market favorite, despite that flop. What was actually a mild risk came midway through the sale, when Christie’s offered up 12 straight works by
Richard Diebenkorn
, certainly a foundational American painter, but not someone who frequently commands eight-figure prices at evening sales.
Each work sold, and the top Diebenkorn lot of the 12-work haul, Ocean Park #126 (1984), hammered at $21 million above a $20 million estimate, which is $23.9 million with the buyer’s premium, a new record for the artist, beating out the previous figure by more than $10 million. It, too, was purchased by Gorvy—in a twist, he was bidding against Lévy, the co-owner of his gallery, who was seated right next to him. As they bid, inches next to each other, it became a little confusing. At one point Pylkkanen slipped up as he took the bid of his former Christie’s colleague, calling out Gorvy’s first name from the rostrum—a big no-no, as the auctioneer is not supposed to identify those offering bids in the room. “There was some skepticism about presenting a large group of Diebenkorn on the market,” Friedlander said.
“But,” she added, “We knew better.”
Another artist record achieved of the night was for
Joan Mitchell
, hit when Blueberry (1969) was purchased by a phone bidder who out-bid Friedlander, going to a $14.5 million hammer—nearly double its high estimate—and $16.6 million with fees. High marks were also snatched by
David Wojnarowicz
,
Morris Louis
,
Robert Gober
,
Nicolas de Staël
, and
George Condo
. The Condo at Christie’s was one of many studded through the evening sales and day sales this week, and maybe the best—before Pylkkanen opened the bidding, he said he had 11 interested clients on the phones ready to jump in and bid. Eventually, it came down to a scuffle between post-war and contemporary deputy chairman Andrew Massad; the department’s co-chairman Alex Rotter; the department’s Europe head Francis Outred; and Christie’s Asia deputy chairman Xin Li Cohen, who secured the work for a $5.2 million hammer, nearly double its high estimate, which came to $6.1 million with fees.
During the very final lots of the sale, there was still bidding in the room—even if, at that point, $1.7 billion had been spent at Christie’s over two weeks, $858.56 million was spent on art at Sotheby’s in a matter of days, and $156.9 million had already been spent at Phillips over its day and evening sales, amounting to a total of more than $2.75 billion, with the day sales at Christie’s still to come.
“You have to remember how much money has been spent these last two weeks,” Gorvy said after the sale. “It just shows how much depth there is in this marketplace.”
Nate Freeman
Related Stories