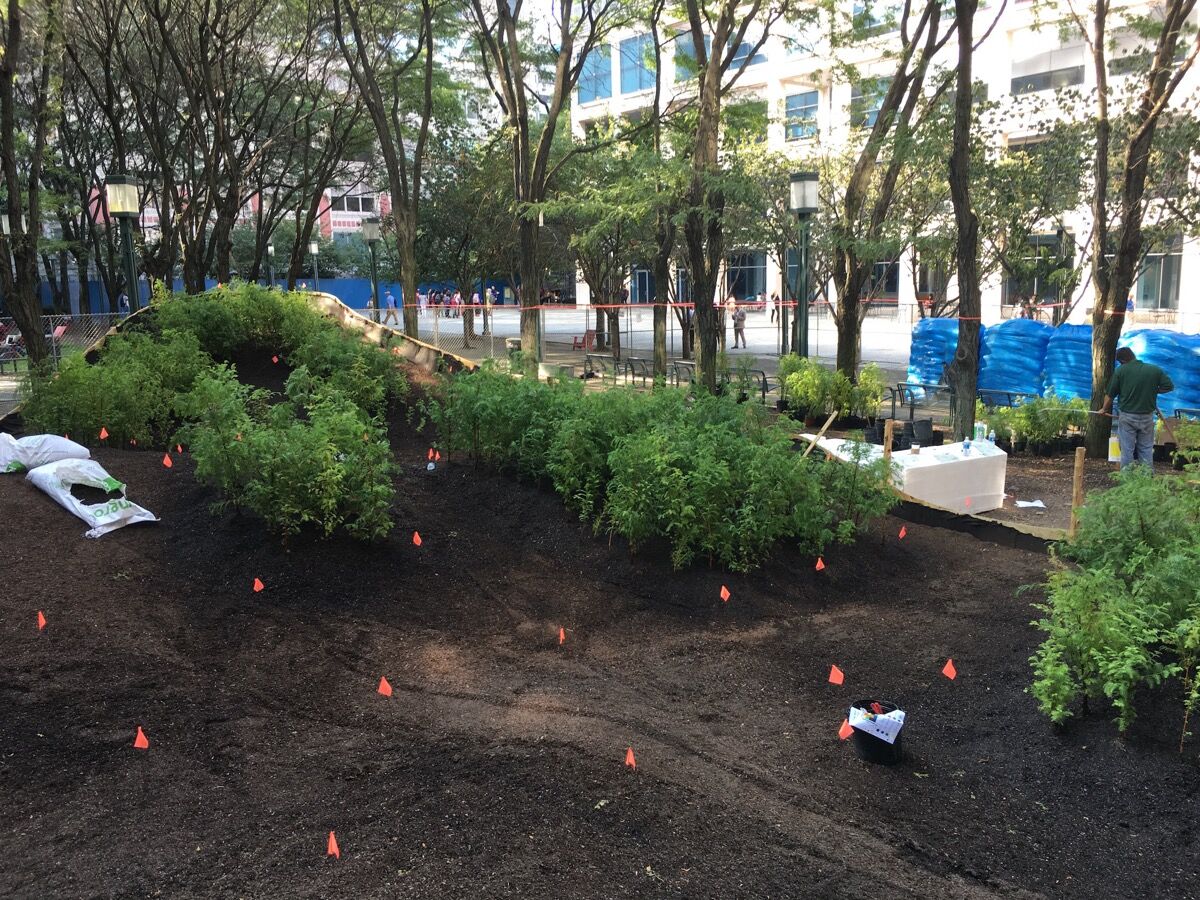 Take a walk through downtown Brooklyn this week, and you might just happen upon a grove of 4,000 Redwood trees, those prehistoric plants that have been known to grow as tall as 379 feet. For comparison, that’s bigger than the Flatiron Building (285 feet) and longer than the Brooklyn Bridge (277 feet), or even a football field (360 feet). Yes, you heard right—downtown Brooklyn.
Lost Man Creek, as the grove has been named, is the brainchild of
Spencer Finch
, an artist who has translated a wide-eyed fascination with nature and perception into a poignant—not to mention ethereal and beautiful—body of work over the last 28 years. This project, however, marks his first time using live plants as his medium. “It’s almost like this slice taken out of California, shrunk, then dropped down into Brooklyn,” Finch mused on Wednesday, as he surveyed the stand of young Redwoods that he’d planted over the past month.
The dense grove, a precisely mapped, miniature replica of a 790-acre section of California’s Redwood National Park—scaled to one hundredth its original size—fills a section of MetroTech Commons, a bustling square lined with office buildings. It’s perhaps best-known for its proximity to Kings County Supreme Court (jury duty) and Shake Shack (the burgers you treat yourself to after). “I like this idea of something so wild, say as Redwood forests, being brought into such an urban environment, like this one,” Finch smiled, as his eyes trail up the side of a skyscraper to his right.
The day I caught Finch, he and his team of project managers, landscapers, and Parks Department volunteers were planting the last of the trees, finessing their placement before the installation’s October 1st opening. The artist has spent the last two years—since the New York nonprofit Public Art Fund first approached him about conceiving a project for MetroTech Commons—researching, selecting, and getting to know the trees that now stood in front of him. In the process, Finch and the pines have developed a close relationship. (That day, fittingly, he wore a sweater that perfectly matched the color of the trees’ pine needles.)
“Some of these guys just need to go in, because they’re special in some way,” he explained, nodding affectionately to a group of unplanted saplings. “Because they’re so small, there’s this funny scale thing that happens: You start imagining each one having a personality.” Indeed, some were spindly and awkward, others straight and strapping. They’re the kind of plants you want to get to know.

Like all of the trees Finch used for the project, they’re young Dawn Redwoods, a cousin of the towering Sequoias most of us recognize from middle school biology textbooks or awe-inspiring rambles around the Pacific Northwest. This genus was chosen in part for its resilience (“I mean, they grow on some New York City streets, so if they can survive there, they can make it anywhere!” Finch quipped), but also for its ability, in some environments, to exceed the height of most urban landscapes.
“When you look at these three- or four-foot-tall trees and come to realize that, if they were full-sized, they’d be about 50 feet taller than this building, it inspires a new kind of awareness,” Finch explained, gesturing to a big, shiny office building overhead. He added that, in the world of his forest, humans would be three quarters of an inch tall, a fact that he plans to invoke by adding a small campsite somewhere in the grove. “I think that sort of scale-shift creates a sense of magic—one that, hopefully, can’t help but feed an appreciation of nature,” he continued.
And while visitors could come away from a visit to Lost Man Creek with the assumption that Finch’s grove doubles as a comment on sustainability or global warming, he’s quick to revise that reading. “I mean, my politics are definitely pro-environment, like most artists in New York, but it’s not about a message,” he says. “I’m hoping that it’s more about wonder, in some sort of way, and making people realize how amazing these trees are.”
As Finch spoke, the sun came out momentarily and streamed over the bonsai-scale grove. He pointed out the way the shadows that dotted the four-foot-tall canopy resembled the tendency of clouds to cast dark, roving patches on tree-covered mountaintops, not unlike the environment on which Lost Man Creek is based. As Finch stared down at the trees, his mind traveled to those towering, ancient Redwoods pushing up into the Northern California sky. “They’re just mind-boggling,” he explained. “It’s just some sort of wonderful miracle that they exist—and also that they were preserved. That act of preservation seems to just represent the best impulses of people and government officials.”
As I looked over the group of some 4,000 trees, anthropomorphizing each one as Finch had, I couldn’t help but think that Finch’s Lost Man Creek represented another kind of best impulse—to create public art that doesn’t just sit there idly or bombard people unwantedly, but inspires curiosity, discovery, and maybe even a little magic.
Alexxa Gotthardt
Related Stories