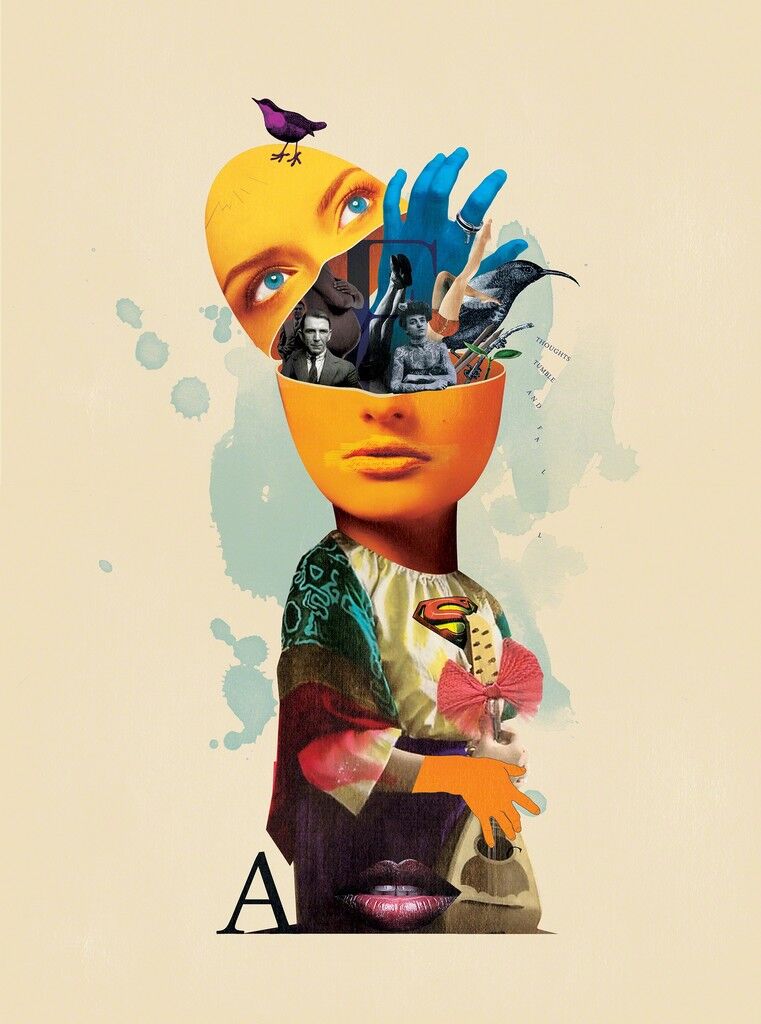 caitlin truman - baker
thoughts, 2016
manZArt
In his new book Feck Perfuction: Dangerous Ideas on the Business of Life, artist and designer James Victore shares 77 refreshing lessons for creative professionals on how to pursue a fulfilling career and make bold, meaningful work. Drawing on his own experience pushing boundaries as an art director, graphic designer, and teacher, his plucky words of wisdom cover topics ranging from developing your voice to making your own rules and overcoming self-doubt. Here, we share a few excerpts from Feck Perfuction, including four of Victore’s lessons. 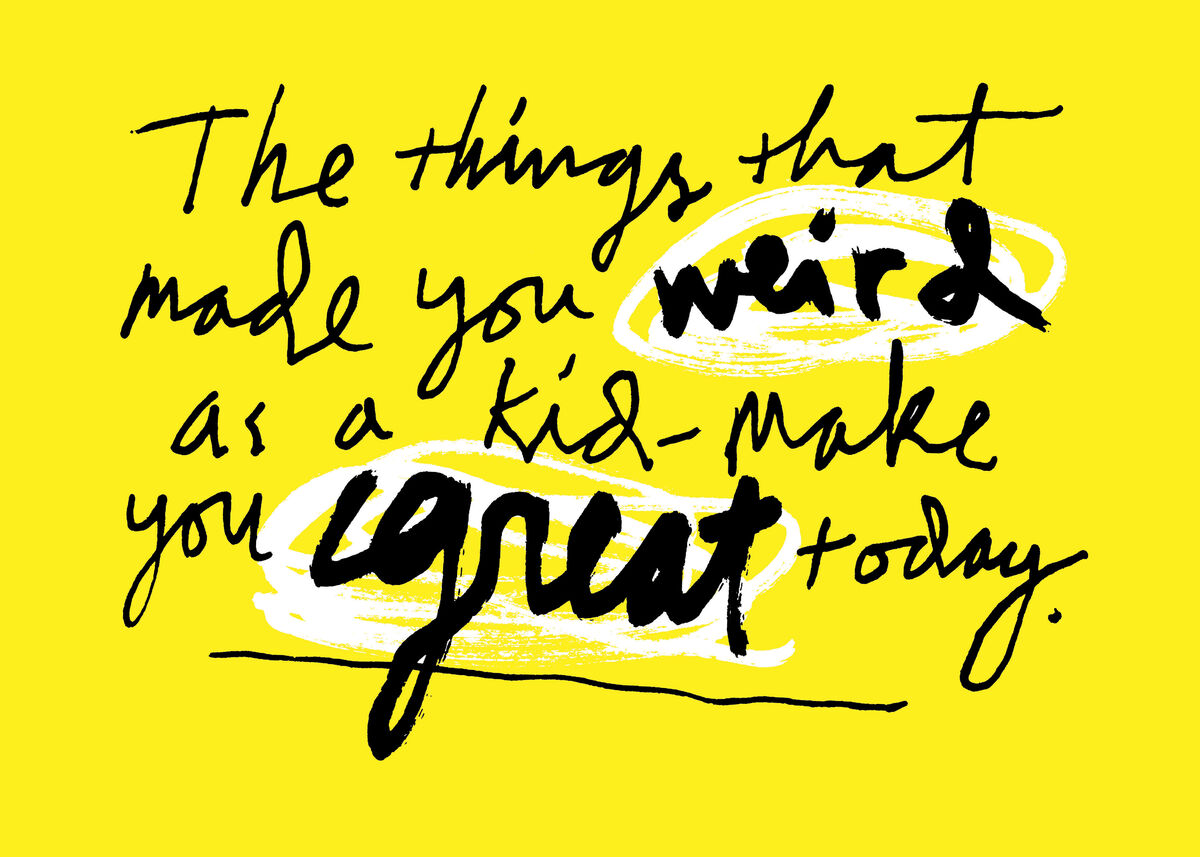 When I was a kid, I was full of wordplay and jokes. I loved to sing loudly and poorly. My best talent was entertaining my fifth-grade friends by drawing naked ladies. They looked more like lumpy potatoes, but my audience didn’t care. Unfortunately, my level of energy and enthusiasm lacked appreciation at home or at school. I was called “creative”—and it was not a compliment.
As kids, we’re all weird. We have our interests and activities, and we like to run them full throttle. As we get older, we realize there’s a price to standing out, so we shrink from our weirdness in fear of anyone finding out who we really are. Being weird or different—even creative—should be not a source of shame or embarrassment but a torch to be held high. Weird is about the courage to be who you were born to be. Nerdy, goofy, fidgety; these are strengths. These are gifts! The things that made you weird as a kid are the source of your character and creative powers. These are the base elements of who you are. Not perfect. Not trying. Just yourself. If you hide them, you risk never knowing what you’re capable of.
Professionally, weird is a benefit. For some fields, it’s a damn prerequisite. Any “successful” actor, chef, musician, athlete, or comedian, when asked what contributed to their success, will answer, “When I was a kid….” Pop-culture icon and astrophysicist Neil deGrasse Tyson remembers looking up into the night sky as a child and says, “The universe called me.”
When you accept your weirdness and believe in your gifts is when things get really weird. That’s when your cause inspires others. When people see their own struggle reflected in yours, you create the potential for shared humanity. Your weirdness speaks to them. That’s when you find those people who accept you precisely because you’re weird and different. Ultimately you’ll hear that glorious refrain: “Oh, you’re weird, too? I thought I was the only one!” This is how you form relationships and businesses. This is how you find your audience.
Accept it: You’re weird.

There ain’t no rules 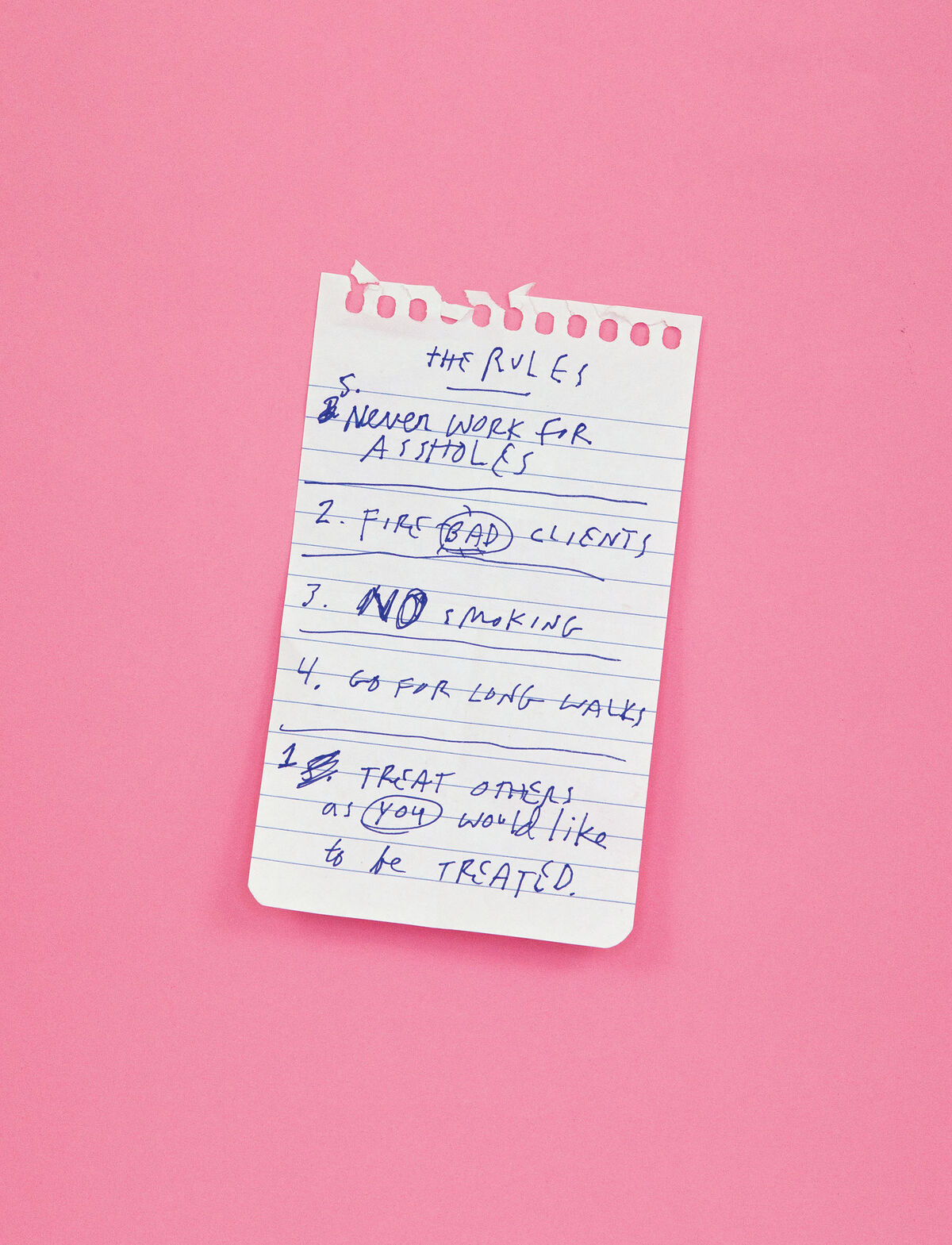 Advertisement
Kids love rules. Play a game with any five-year-old, and they’ll ignore the actual rules of the game but create their own. Then they heap rules on top of those rules—making it up as they go along. Then if the rules don’t work in their favor, they change the rules.
This is not such a bad idea. . .
Adults love rules. We actively look for them, and use them like a handrail to find our way around. We want to know where we stand. We seek structure to our floppy lives, so we ask, “What are the rules around here?” What we find are actually just strong suggestions of what you can and cannot do to fit within polite society. These are not really rules, but society’s habits, handed down and unconsciously agreed upon so everyone can play nice and avoid mayhem. When we do splurge and break the rules, we feel as though we’ve gotten away with something—when in actuality we have only taken what freedom was ours to begin with. Most rules are an invisible fence; they exist because we believe they do.
The problem with the rules is that they’re generally unisex and one-rule-fits-all. They promote conventional, business-as-usual thinking and don’t allow for the concepts of individuality or play. Rules like “Stay within the lines,” “Don’t rock the boat,” and even “Be nice” seem innocuous enough but are creatively stifling.
Even in the commercial practices of architecture, film, theater, and business, there are rules about how things are done. Only when we see those rules beautifully ignored do we come to a new, higher realization of what is possible.
The rules are fine for some, and, like the boundaries of a playing field, they serve a purpose. The problem starts when they begin to fence in your spirit. While it’s not necessary to totally disregard the rules, it is critical to have your own set to live by. Rules that not only allow you to call BS on the existing standards, but also give you the elbow room and flexibility to lead a profitable, creative, and meaningful existence.
Make your own rules, make your destiny. 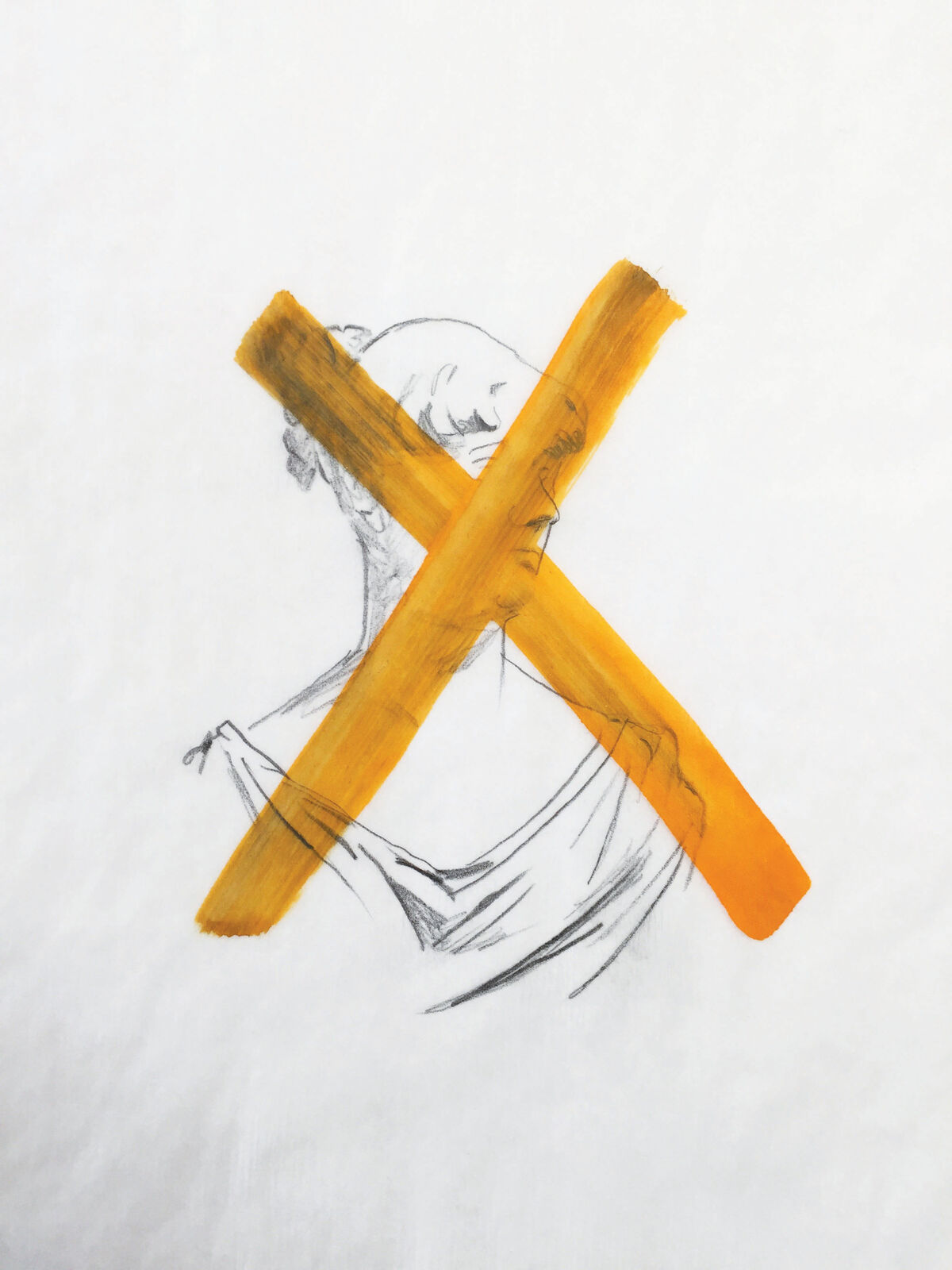 We create because we need to.
The act of invention, giving form or meaning where previously there was none, drives us and makes us happy. We make art or business to suit ourselves—and are often surprised when our talent is acknowledged by others. Our labor touching someone else’s heart is a serendipitous by-product of creation, but it’s secondary to making.
Seeking others’ approval of your work is a common mistake most creators make. Often I receive requests from young designers asking my opinion of their work. My stock answer is that what I think of your work is not important. What’s important is what you do with it. What’s important is how it makes you feel, how you talk about it, and how you get it out into the world. Not only is it not important what I think of your work, but also, frankly, it’s not important what you think of it. Most of us are terrible judges of ourselves, let alone our work. We’re so familiar with the marks we make that we can’t recognize them as unique or special.
You are not qualified to judge your own work, you are only qualified to make it. Don’t judge it or call it good or bad. You can only make the work and get better at doing it. No artist or author or inventor in history ever knew they were making something of interest. They didn’t look for answers, they lived the questions, taking deliberate action every damn day and allowing the answers to reveal themselves when the time was ripe. The proof of their genius could only be found out in retrospect.
You have no idea what the public will like or respond to. The critical or financial success you seek will come from your ability to follow through with the work you love. 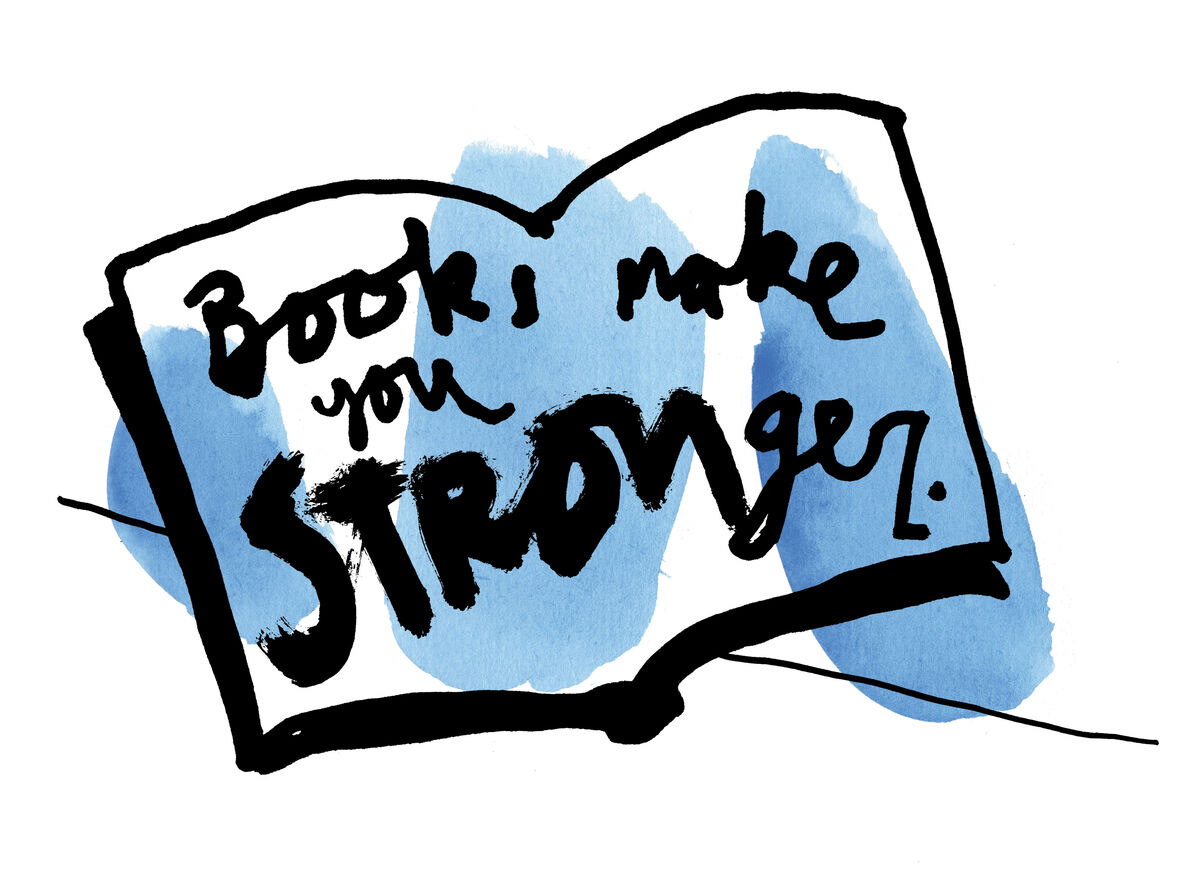 I taught at the School of Visual Arts in New York City for almost 20 years. Most of my students arrived right out of high school. I never thought this was a good idea because they didn’t know much. They were going into to a field where their lives and backgrounds and interests would make their work rich. The students who brought gold to the table were the ones who had pursued other avenues first—transfer nursing or biology students or older students going back to school. The ones with a little road under them, who had lived and, more importantly, had failed.
As a teacher it’s my job is to invite students to bring their baggage into their work. Without my pressing, a young student may think that there is a right answer to search for outside of themselves. Already schooled by a smorgasbord of television and various media, they end up picking from a very small menu of usual, logical, and safe ideas and visuals, making the obvious more “obviouser.”
The best designers are interesting people first. Smart, funny, and curious people.
Here’s my point: Learn everything. Then forget it. Let the original details and nuance blur, put your own imprint on the content and action, then create. Get an education. Get some life experience. Amass some skills and interests. Learn about Shakespeare and poetry, about diet and nutrition and woodworking. Japanese flower arranging helps tremendously, as do improv class and aikido. Let all of this come inside of you. Let it steep, becoming your muscle and memory. Then, put it in your work. It may come out as obvious references, or it may just be an added flavor. Or it may just make you happy.
Let all your loves, fears, and interests saturate your work and make it memorable. Who you are is the most important part of your work—never leave it out.
James Victore is a designer, creativity advocate, and artist whose work has been exhibited at the Museum of Modern Art, New York. Based near Austin, TX, he lectures and teaches around the world.
Excerpt from Feck Perfuction: Dangerous Ideas on the Business of Life by James Victore, published by Chronicle Books, 2019.
Related Stories

Is Creativity in Your DNA?