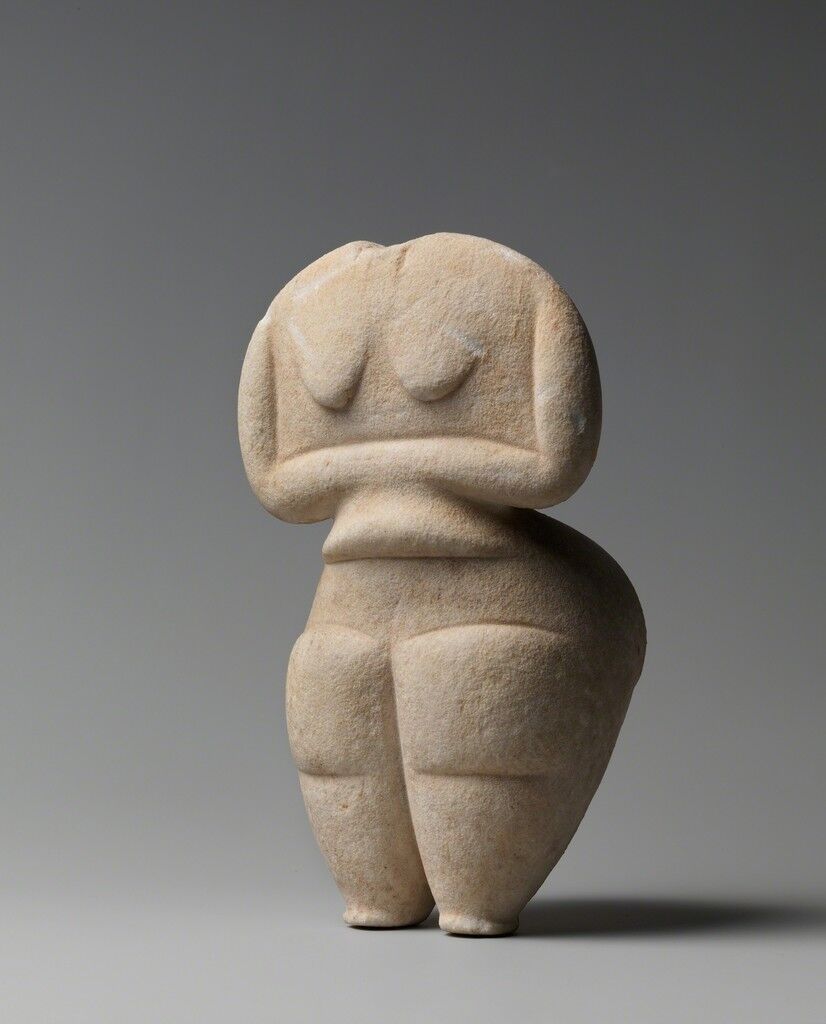 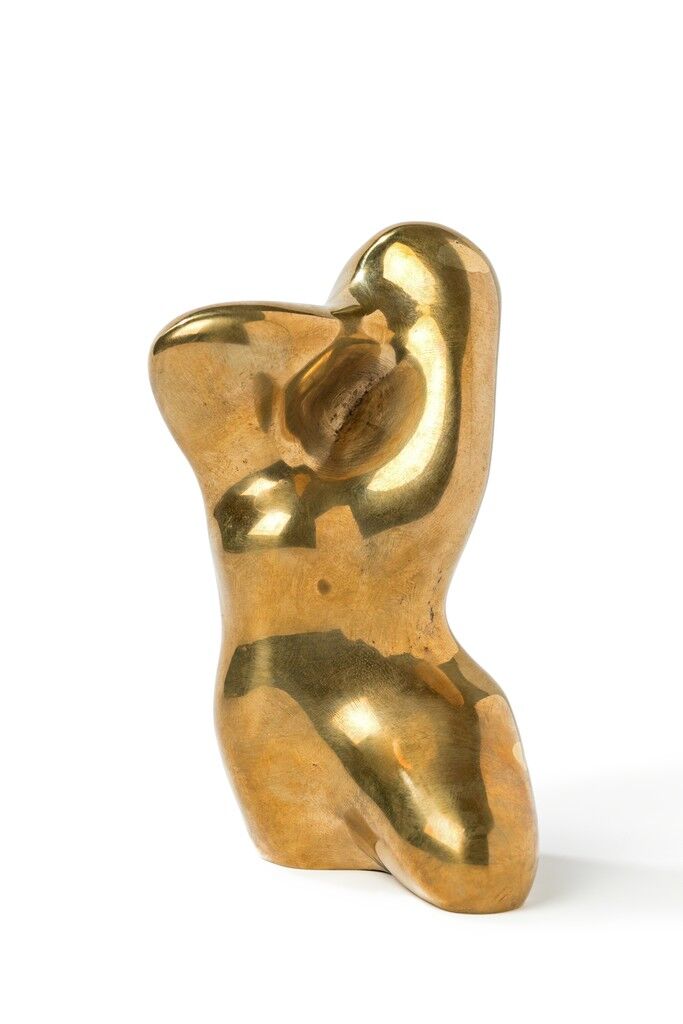 Hans Arp
Torso-Profile, 1958
Art 1900
The profound influence of
African art
—especially masks—on pioneering 20th-century artists like
Pablo Picasso
,
Constantin Brâncuși
, and
Amedeo Modigliani
is well-documented. More recently, the fascination of figures such as
Henry Moore
and
Josef
and
Anni Albers
with
pre-Columbian art
and architecture has been explored in depth, adding a vibrant, new dimension to the study of modernism. Yet there is another significant ancient tradition that has been largely overlooked in the discourse surrounding the trajectory of the avant-garde: Cycladic art. Predating the ancient Greeks, the elegantly simple marble figurines that have been unearthed from burial sites along the Cyclades hail from the Neolithic and Bronze ages, and provide an astonishing link between prehistoric and Western art.
Not much is known about the civilization that inhabited the Cyclades, a cluster of islands at the center of the Aegean Sea. Rich in gold, silver, copper, obsidian, and marble, the islands’ natural resources enabled tremendous prosperity, and resulted in the flourishing of an enduringly unique strain of art that lasted from around 3200 B.C.E. until about 2300 B.C.E. Without a written tradition, these artifacts present the only evidence of this advanced early society, and their ambiguity has only served to heighten the impact of Cycladic art on the modern imagination. 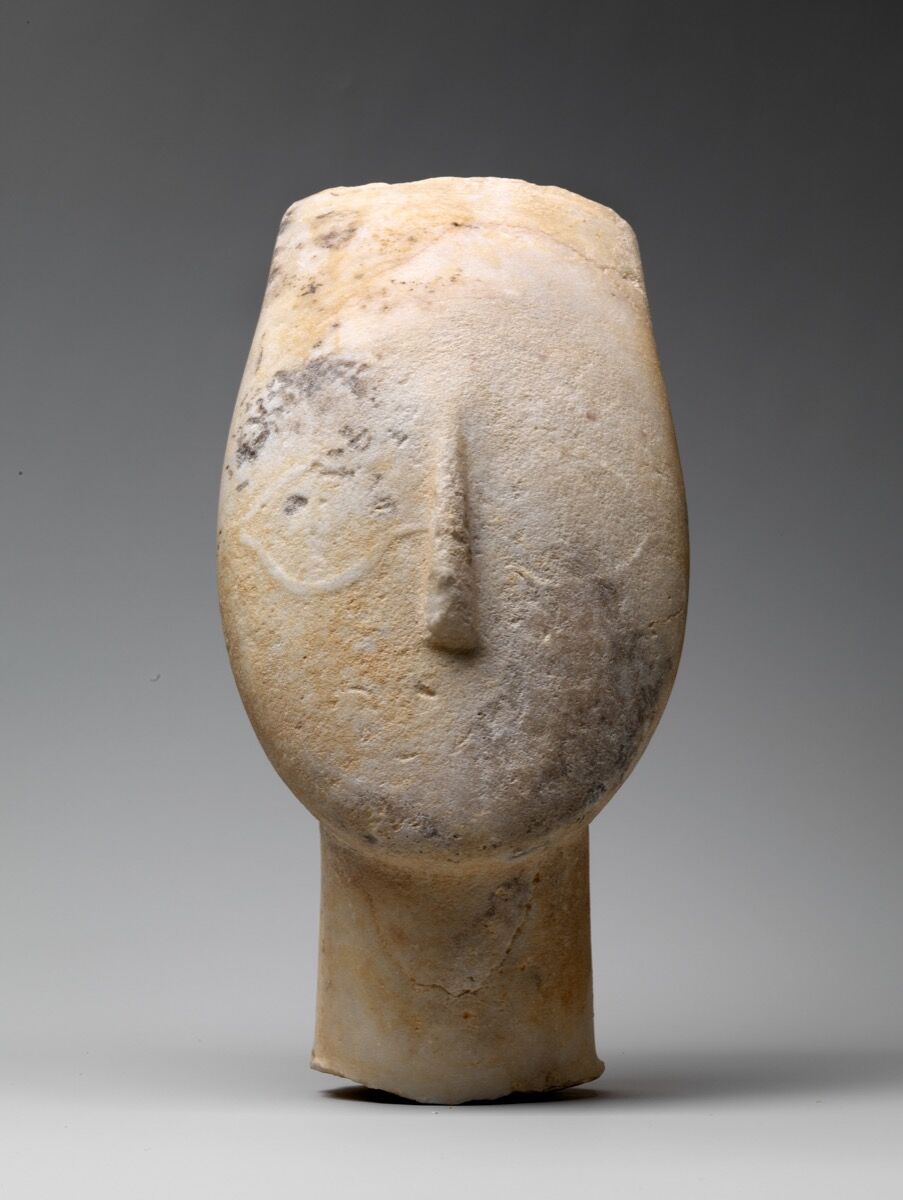 Marble head from the figure of a woman, Early Cycladic II, 2700–2500 B.C.E. Courtesy of the Metropolitan Museum of Art. 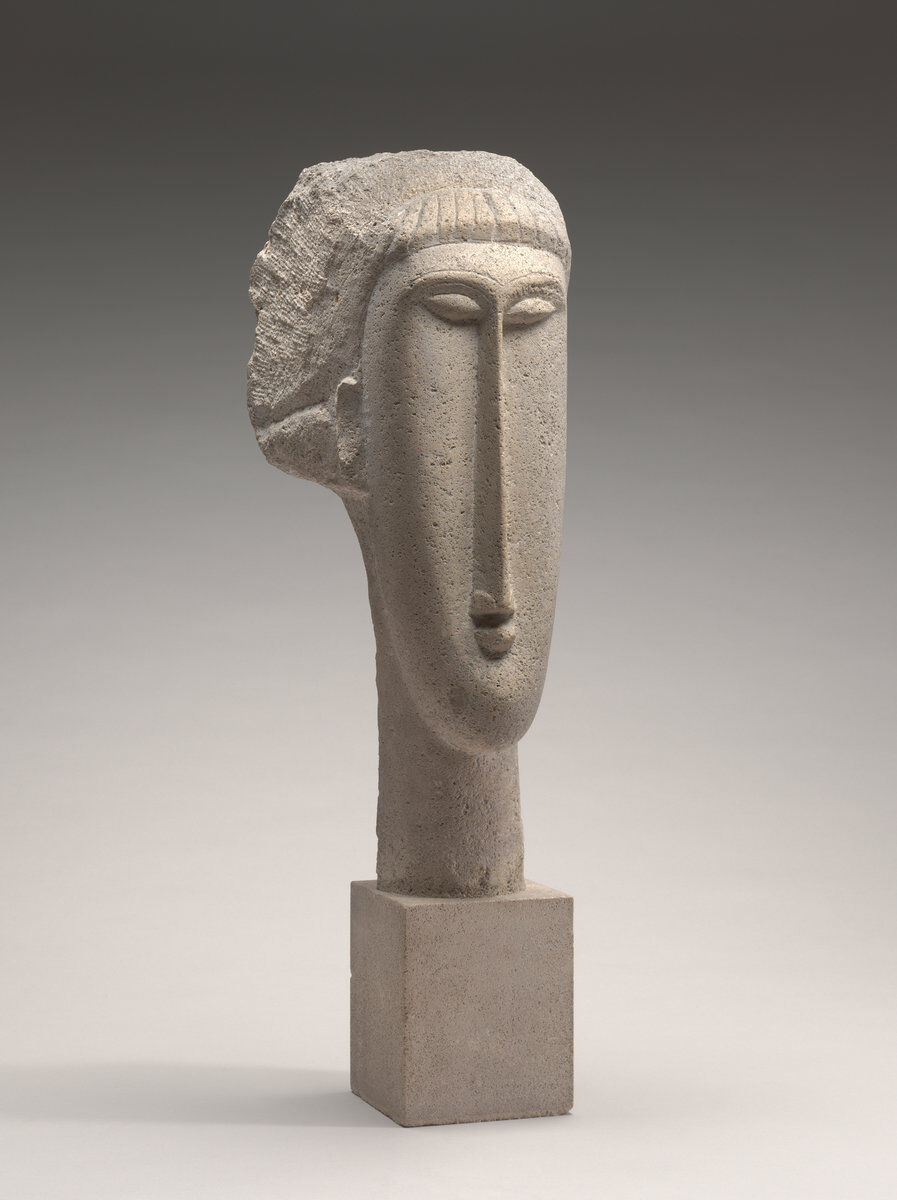 Amedeo Modigliani, Head of a Woman, 1910/11. Courtesy of the National Gallery of

As scholar Pat Getz-Preziosi has written in her excellent introduction to the field, when 19th-century travelers to the Cyclades returned to Europe with “curious” marble figurines, or sigillaria, they “were at first considered primitive, in the pejorative sense of the word, ugly, and, at best, curiosities from the dim recesses of Greek prehistory.” These objects were dutifully displayed in ethnographic museums and widely reproduced in books. In the early 20th century, modern artists looking to break with European conventions rediscovered these objects, and they came “to be highly esteemed for their compelling combination of gleaming white marble and painstak­ing workmanship, for the calm force of their essential forms, and for the mystery that surrounds them,” writes Getz-Preziosi.
Somewhat ironically, the vogue for Cycladic art that arose with the avant-garde’s appreciation spurred an illegal traffic of artifacts that has only complicated the study of Cycladic culture. As a result of such looting, “many of the Cycladic art objects now in Western museums have no provenance or any description,” Getz-Preziosi explains. The historical significance of Cycladic art has been additionally convoluted by the proliferation of for­geries produced during the 1960s.
From a formal perspective, the link between Cycladic art and modern sculpture seems obvious: The abstract simplicity, highly stylized forms, and balanced proportions of the many white marble figurines and vessels unearthed from the Aegean islands clearly translate to well-known examples of today’s most famous sculptures. Compare the head from the figure of a woman, dating from 2700–2500 B.C.E., to Brâncuși’s graceful marble bust Sleeping Muse I from 1909–10, or Modigliani’s elongated Head of a Woman (1910–11), made around the same time. The most conspicuous similarity between the three women is their pronounced noses, long slivers that protrude from the center of each sculpture. The remaining facial features are barely delineated in Brâncuși and Modigliani’s works, and don’t appear at all in the Cycladic piece. 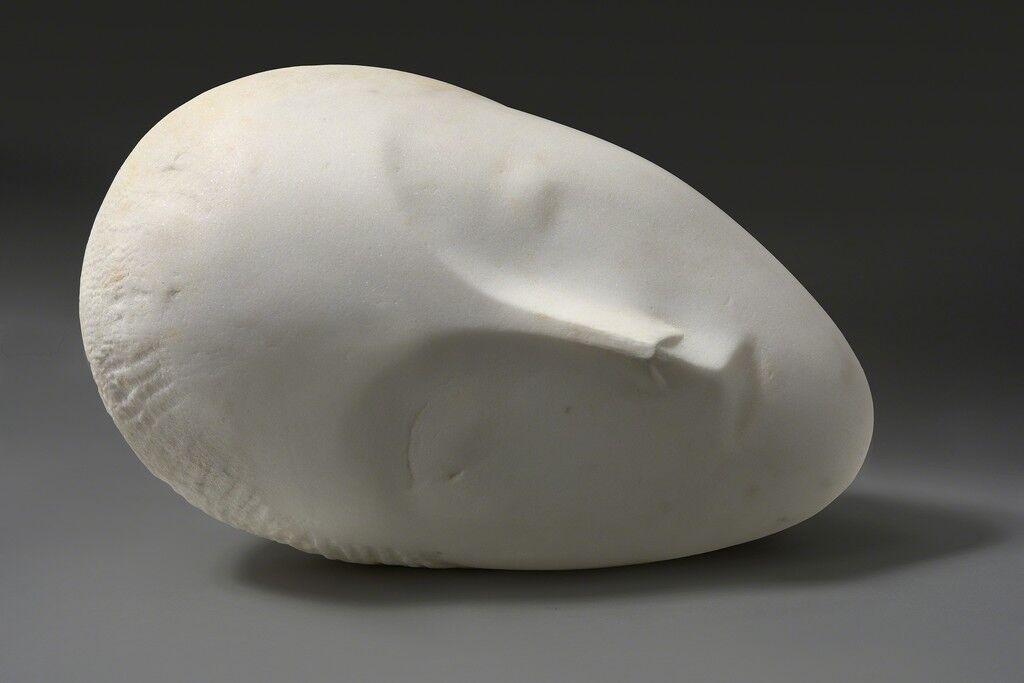 Constantin Brâncuși
Sleeping Muse I, 1909-1910
Hirshhorn Museum and Sculpture Garden
Advertisement
Despite so little being known about the Cycladic period, modern artists took note of the direct, formal qualities of these works. This lack of historical context was certainly no hindrance; besides, most artists knew little to nothing about the African and South American cultures whose formal traditions they adopted. Modern artists didn’t necessarily need to know much about Cycladic art to borrow from its aesthetic handbook. In fact, their ignorance was paramount to the development of the abstract austerity that characterizes so much modern sculpture: It is known from traces of color preserved on various artifacts, for instance, that Cycladic artists decorated their sculptures with bright colors, just as the ancient Greeks did. Imagine if Brâncuși or Modigliani had known that the eyes and mouths on Cycladic busts most probably would have been painted in garish colors, rather than the gleaming, pearly precedent they may have admired.
It’s easy to draw other connections between Cycladic art and its modern counterparts. The presumed fertility function of many Cycladic artifacts—a substantial portion of all busts, torsos, and figurines are women, while the occasional male takes the form of music maker, wine bearer, hunter, or warrior—certainly inhabits the sensual sculptures of
Hans Arp
or
Alexander Archipenko
, albeit in a secular, rather than religious sense. Arp’s Torso-Kore (1958) seems to reference the archaic mode of Greek statue in its title, but in execution, it more closely resembles the elongated torsos of Cycladic figurines, their arms traditionally folded around their bellies. His Torso-Profile from the same year, on the other hand, with its tumescent metal flesh, looks more akin to the ample Venus from 4500–4000 B.C.E. in the collection of the Metropolitan Museum of Art. Ukrainian Archipenko’s Flat Torso (1914) and Woman Combing Her Hair (Femme debout) (1915), take a seductively graceful approach to the female form, the undulating curves of the bronze sculptures hinting at the female shape while never explicitly stating it. 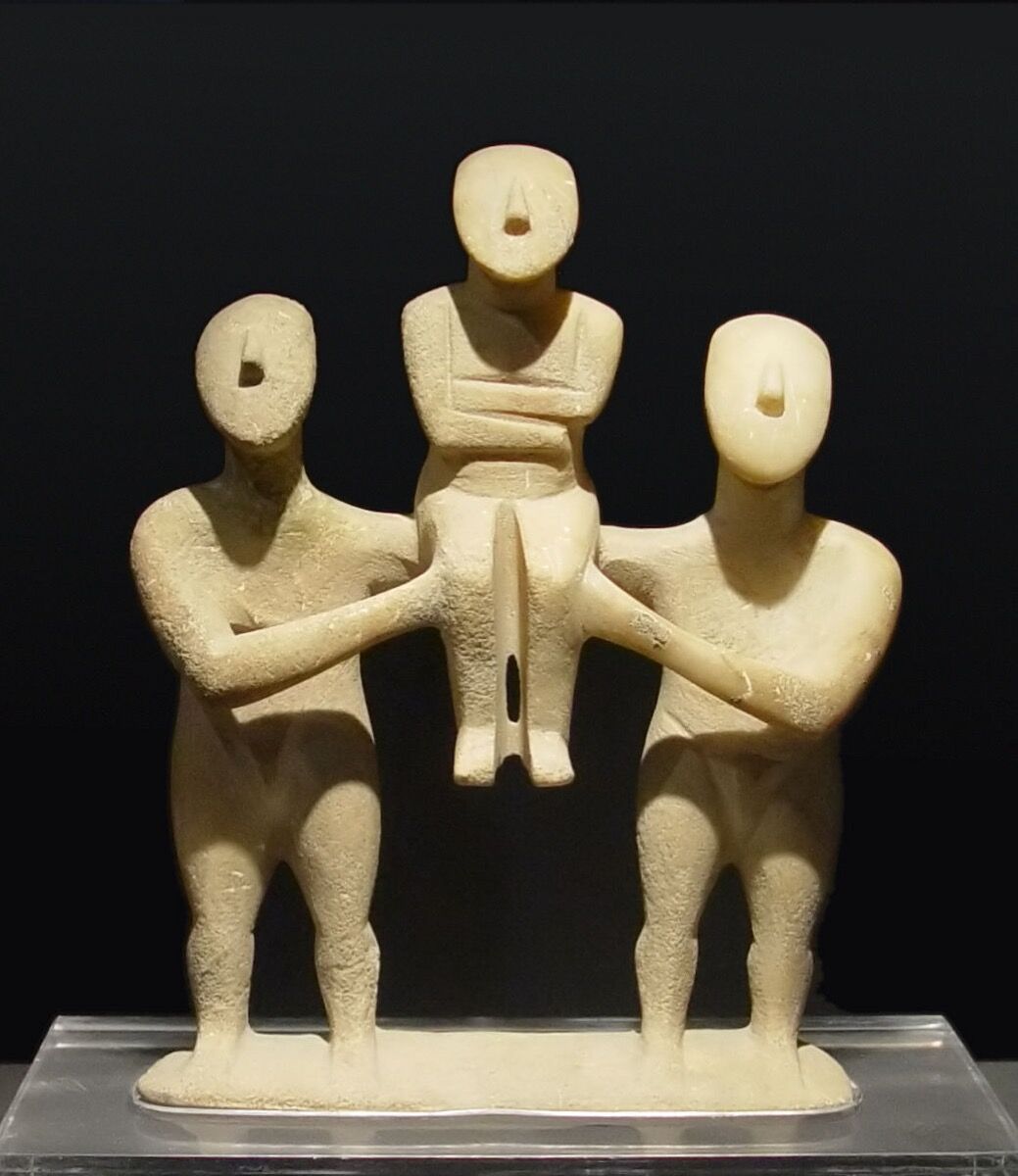 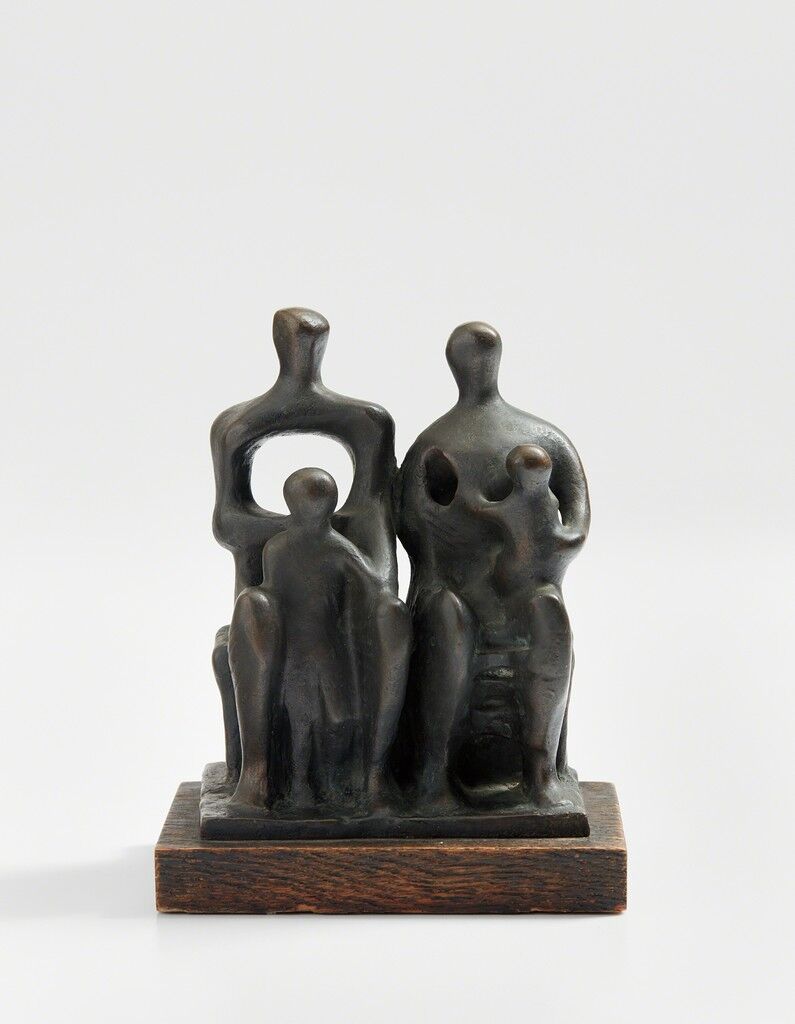 Henry Moore
Family Group, 1945
Phillips
Despite clear formal connections, however, the study of modern artists’ relationship to so-called “primitive art” is further complicated by the dearth of documentary evidence linking specific examples that may have directly informed their work. The celebrated British artist Henry Moore, as Alan Wilkinson notes in his essay “Moore: A Modernist’s Primitivism,” openly recorded his admiration for prehistoric art from across continents, much of which he observed in the British Museum collection. Moore’s prolific notebook drawings from the 1920s illustrate African, Oceanic, Peruvian, Northwest Coast, and Inuit artifacts and sculpture, in addition to prehistoric Egyptian, Sumerian, and Cycladic examples. “In a number of instances,” Wilkinson observes, these drawings “reveal the exact sources in primitive art for specific sculptures.”
Take Moore’s Family Group (1948–49). The life-size bronze features a mother and father seated on a bench, their infant child lovingly held in the couple’s outstretched arms. Compare this minimally rendered trio with the strikingly similar group of three Cycladic figurines, held at the Badisches Landesmuseum. The couple’s sex and facial expressions are, like the persons in Family Group, barely delineated. This pair stands, rather than sits, in symmetry, but they similarly hold the smaller child figure aloft in their linked arms.
The smooth, unembellished treatment of Moore’s figures mimics the polished nature of Cycladic sculpture, and reflects the principle that unites his interest in ancient arts from across cultures, namely the fundamental virtue of “truth to material…one of the first principles of art so clearly seen in primitive work,” as he wrote in a 1941 article. 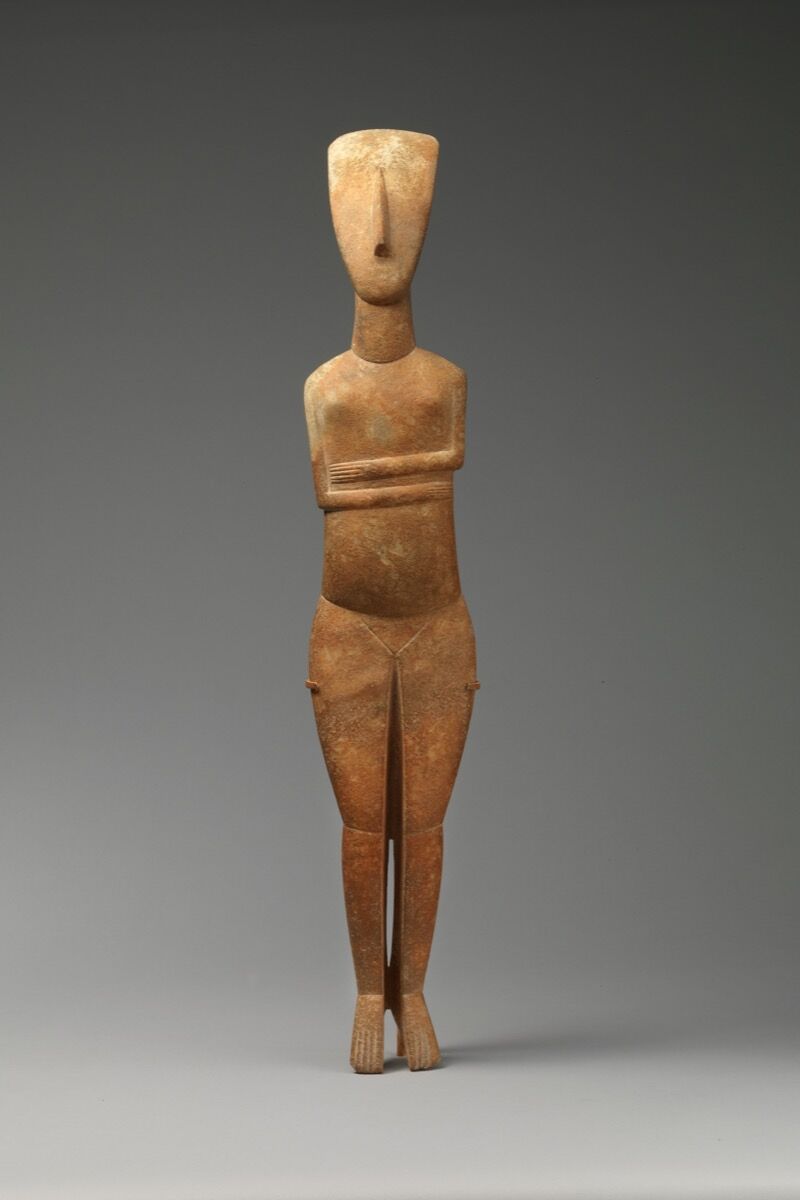 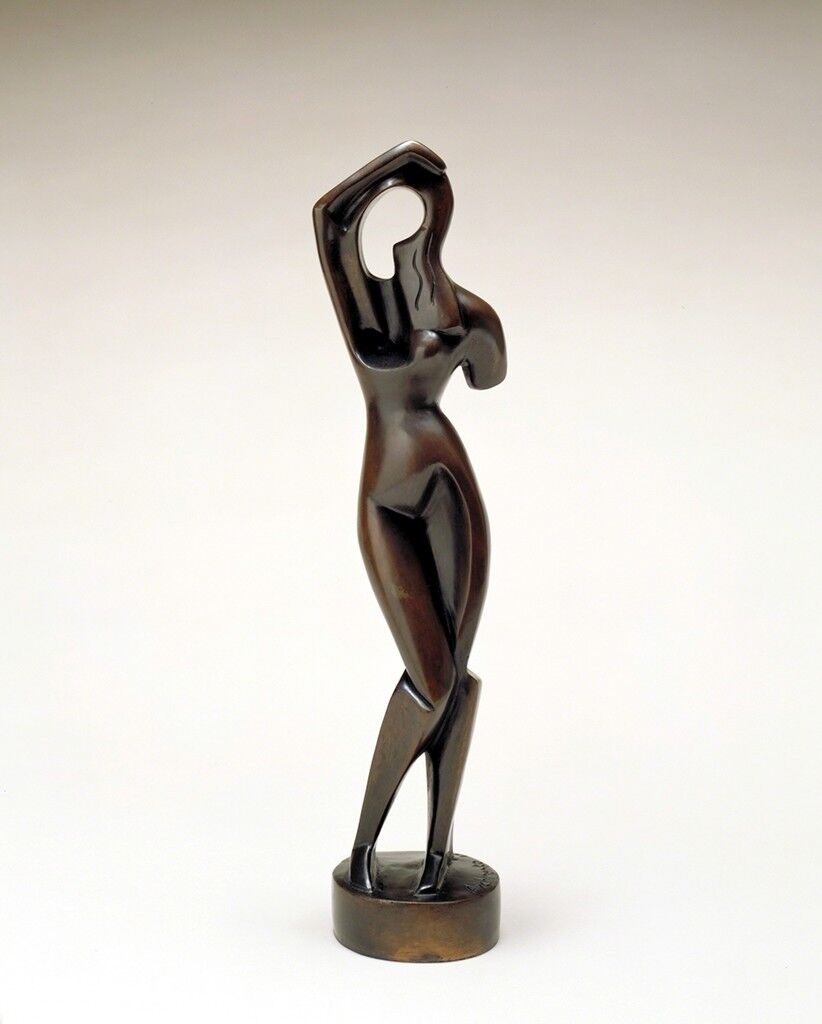 Alexander Archipenko
Woman Combing Her Hair (Femme debout), 1914
Nasher Sculpture Center
Yet far from a dogmatic adherence to material purity, Moore’s output, like many other modern artists of his time, incorporates “the exotic arts” as a means “of giving to his own work a broader and deeper meaning than his own immediate tradition afforded,” as Robert Goldwater wrote in his classic 1938 book, Primitivism in Modern Art. “Moore, like other artists…is suggesting that the primitive embodies certain fundamental characteristics which, far from being restricting because they are elementary, must be observed in order to achieve true freedom of expression.”
In short, the avant-garde retinue—Arp, Brâncuși, Modigliani, Moore, Picasso,
Jacob Epstein
,
Henri Gaudier-Brzeska
,
Alberto Giacometti
,
Jacques Lipchitz
, and
Isamu Noguchi
, among others—turned to the arts of foreign and ancient cultures in order to shake off the mores of Western visual tradition. Although the extent to which some of these artists were directly inspired by Cycladic sculpture remains unclear, the craze for these elegant, prehistoric artifacts around the turn of the century made an undeniably deep impression on visual culture. Many artists and historians have waxed poetic about the influence of “primitive” African and pre-Columbian art on modernism, but the formal similarities to Cycladic art are too striking to be ignored any longer.
Julia Fiore
Related Stories 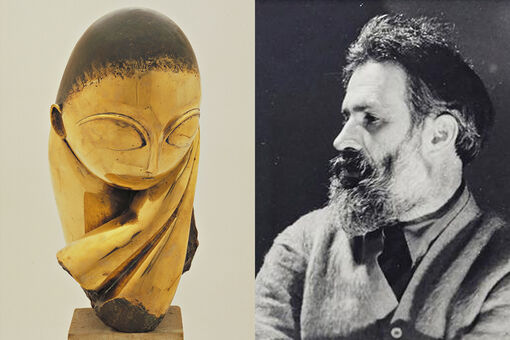 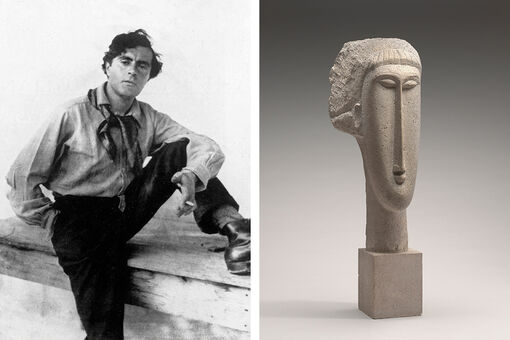 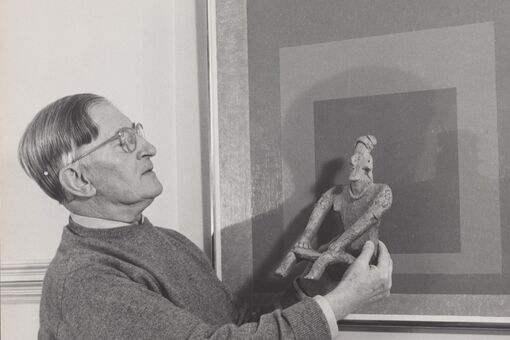