Isaac Kaplan
Aug 21, 2017 6:26pm
Even for those who have called New York City home for their entire lives, there are infinite perspectives through which to see and understand the legendary metropolis. There are the sculptures hiding just above you; the beloved diorama at the Queens Museum, showing the city in miniature; and then the myriad buildings that were dreamt up for the city, but never built.
Those unrealized structures are the subject of Never Built New York, a book written by architecture critic Greg Goldin and journalist Sam Lubell, as well as the title of an exhibition the pair curated, which opens at the Queens Museum this September. Both book and exhibition detail hundreds of designs that never came to be, from some of the earliest planned arrangements for the city’s grid to the grandest glittering towers proposed for the World Trade Center site.
Some projects were foiled by their architects’ wily ambition, while others came tantalizingly close to creation, only to be struck down by politics. Here, we’ve selected five of our favorite buildings from Never Built New York. 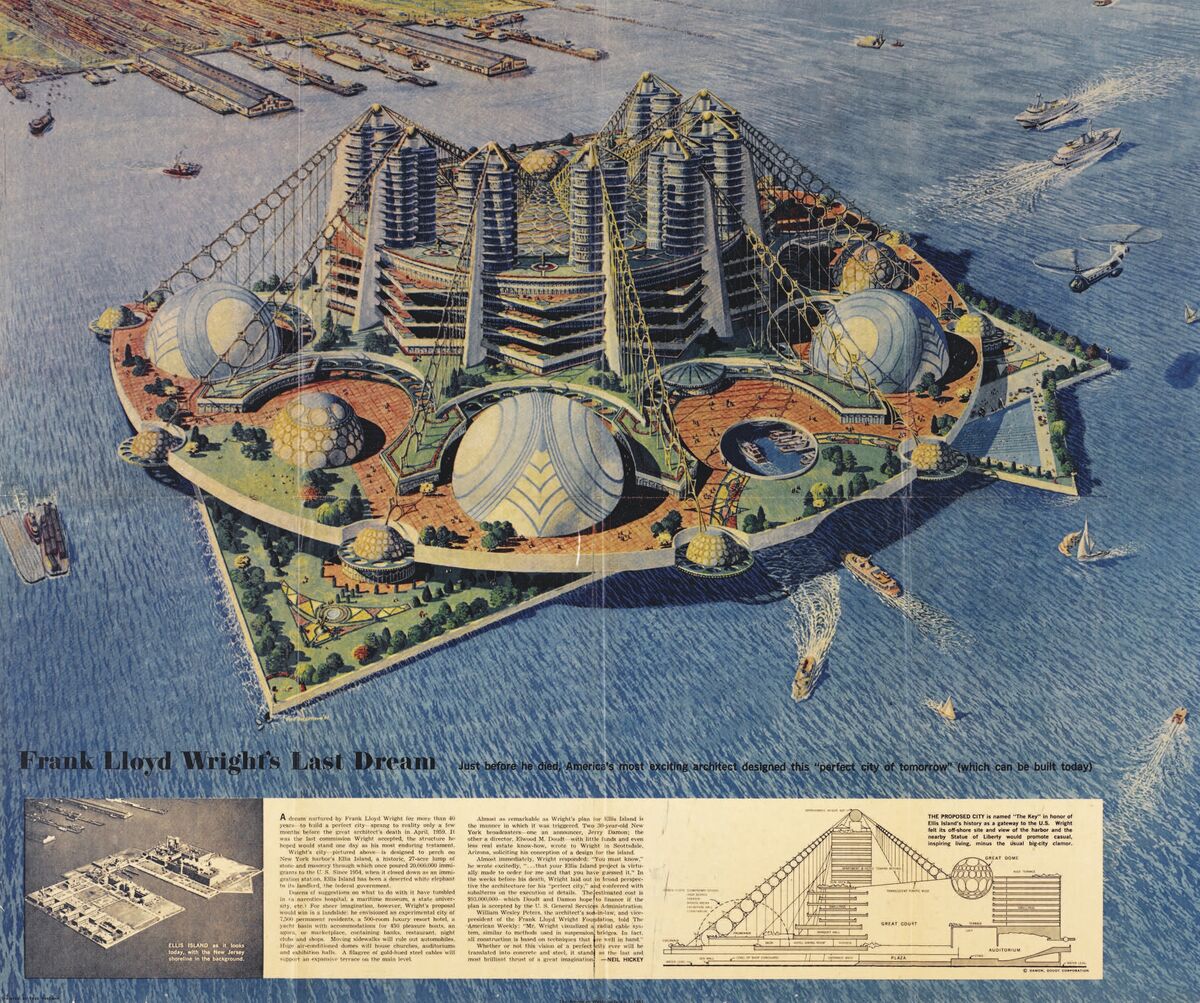 Ellis Island ceased to function as an immigration port in 1954. Following what Goldin and Lubell call “an all-American path,” the island was opened up to developers. The highest bid was for $2.1 million (roughly $17 million today) by the Damon Doudt Corporation, which promised to build a “completely self-contained city of the future.”
This vision would be designed by architect
Frank Lloyd Wright
, who proposed a $93 million design that didn’t lack ambition. The architect described it as promoting “casual, inspired living, minus the usual big-city glamour.” It would house 7,500 residents, boasting seven candlestick-shaped towers, all orbiting around a giant globe in the center. Residents would have access to all the amenities of a big city, including hospitals, movie theories, restaurants, and more. Eventually, the government put the kibosh on Wright’s futurist plan, and ultimately rejected every developer bid tendered for the island in favor of turning it into a national monument. 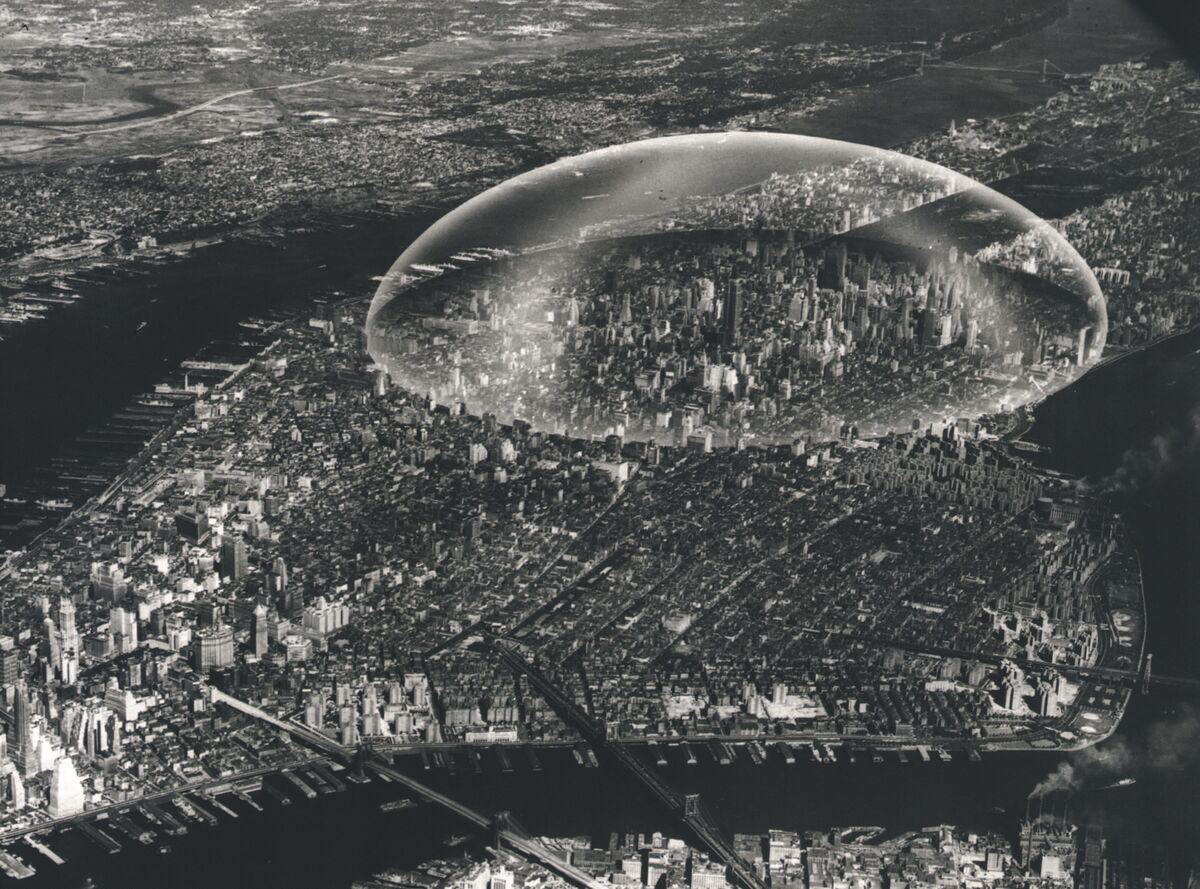 Advertisement
Two thoughts cross the mind of every normal New Yorker on a daily basis. One: There should be a 2,000-foot-wide dome over Midtown. Two: The Dodgers should come back from Los Angeles to be housed in a stadium with a massive plastic dome.
Okay, no one actually thinks either of these things. But in the 1950s and early ’60s, the legendary architect and theorist
R. Buckminster Fuller
did propose building two domes, one over Manhattan and one over a new stadium for the Brooklyn Dodgers.
The Manhattan dome—a larger version of the geodesic domes Fuller promoted throughout his life—never came to be, but that doesn’t mean it was without value or importance. As the authors of Never Built write, the “Dome Over Manhattan was speculative but prescient, if one accepts that humanity is now determined to ruin the natural biosphere.”
The Dodger Dome, however, made significant strides and had it been built, it could have helped to prevent the exodus of the team to L.A. in 1958. The team’s owners had recruited Fuller to work with architect Norman Bel Geddes, who submitted plans for a massive stadium—replete with a dome, of course—that could seat 55,000 people and would cost $2 million to construct. The plan was approved by the mayor and the state, but ultimately, the relatively inexpensive land in L.A. was too good an opportunity for the Dodgers’s owner to pass up. He relocated the team there, to a stadium that doesn’t have a dome. Alas, despite a news story for Fuller’s project with the headline “A Dome Grows In Brooklyn,” this particular idea never took root. 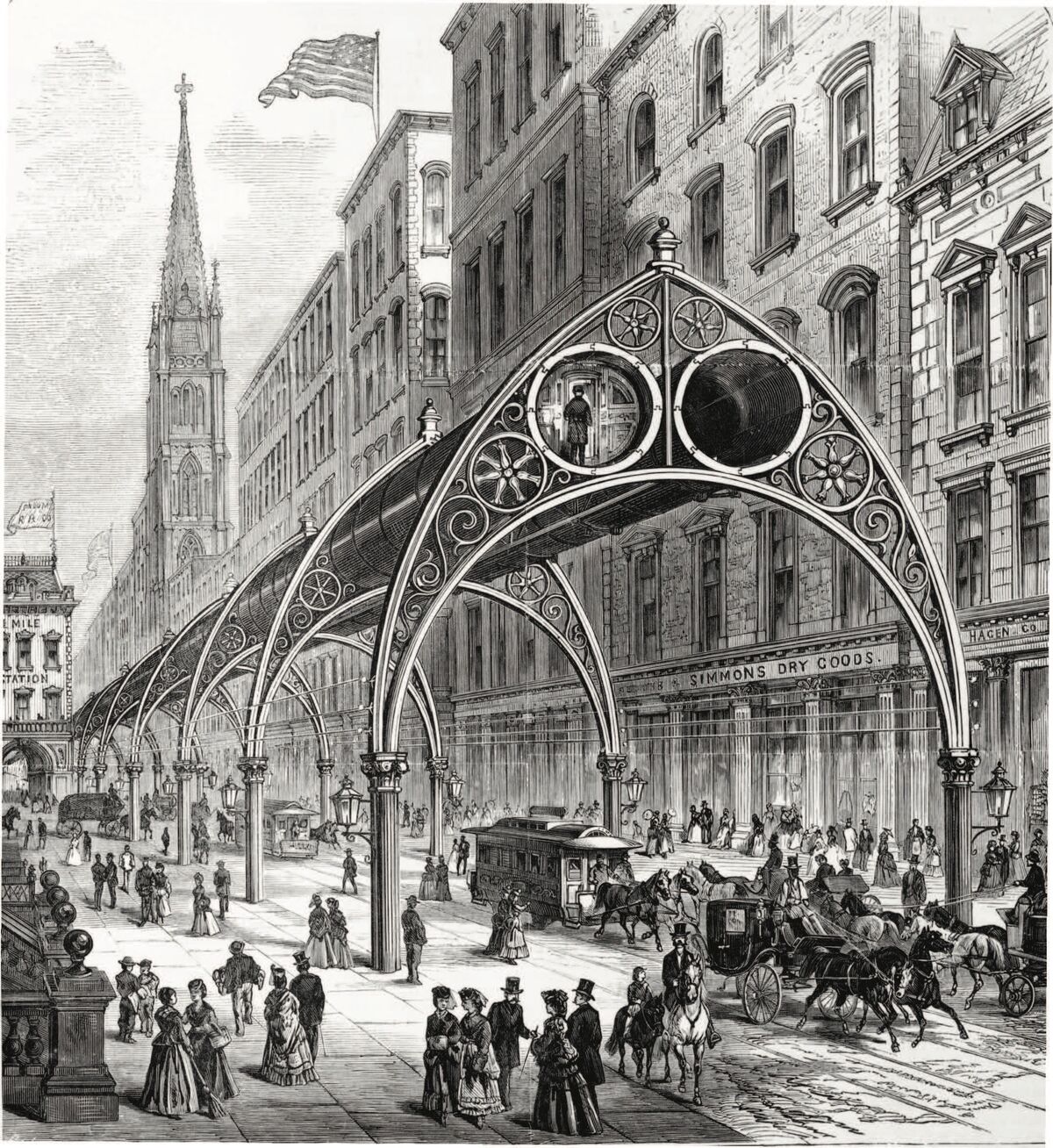 New Yorkers forced to endure ever-more infuriating subway delays have the right to complain—but perhaps not as much as Rufus Henry Gilbert. One of the earliest proponents of mass transit, Gilbert was swindled out of the profits from the elevated train line of his dreams.
A surgeon during the civil war, Gilbert believed that overcrowded slums were at the root of illness and disease. He endeavored to create a way for people to live outside overcrowded metropolitan spaces. Part of this larger mission was his plan for an Elevated Railway, a series of elevated tubes some 24 feet above the ground, which he patented in 1870. The original proposal was foiled by the stock crash of 1873.
Undeterred, Gilbert developed a new plan for the railway in 1874, this time with steam-powered carriages rather than tubes, and prefabricated parts that could be made in a factory, then shipped to New York for relatively easy assembly. Gilbert eventually found backers, and construction began for a train line on Sixth Avenue in 1876. But just a day after the elevated train took its inaugural run in 1878, Gilbert’s business partners pushed him out. He was left without any stock in the enterprise and died of stomach ailments in 1885. He was only 53. 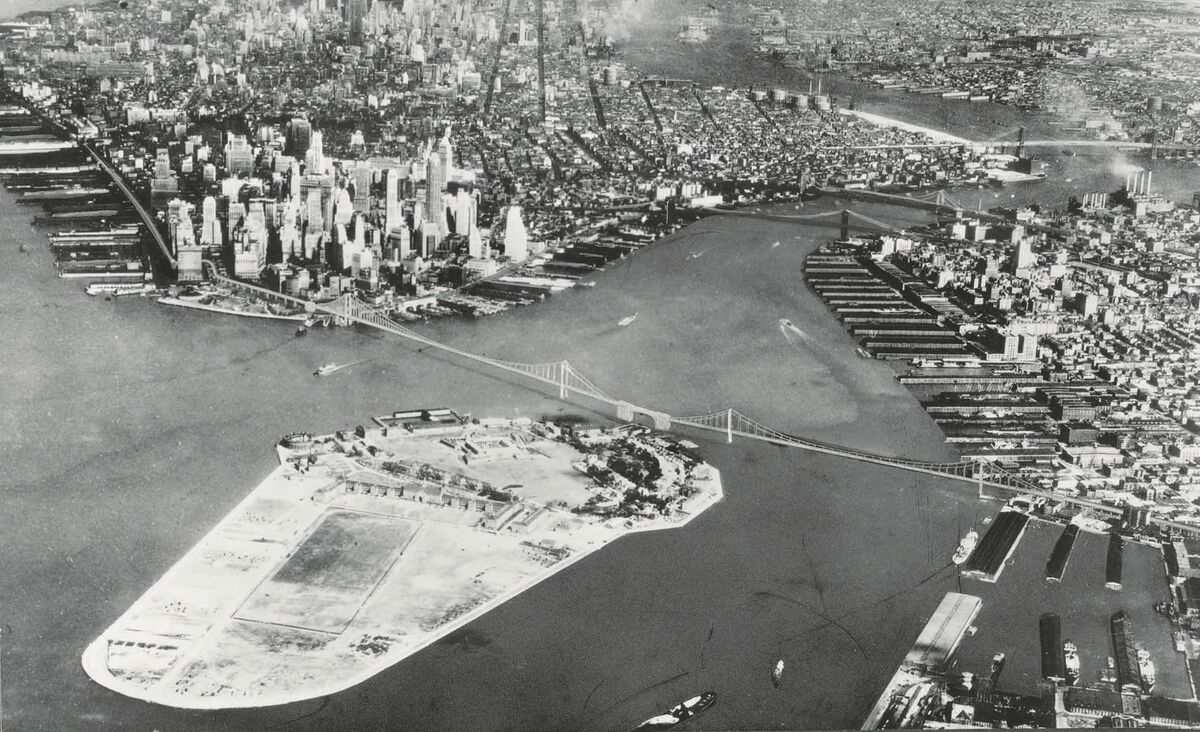 Though Robert Moses altered New York City forever—displacing thousands, while constructing his vision of interconnected highways—he is perhaps best remembered today for his failures. Notable among them was his proposal for a massive road-building project that was thwarted by Jane Jacobs and Greenwich Village community groups. A lesser-known but deeply painful failure for Moses involved the Brooklyn Battery Bridge—a 6,500-foot-long speedway that would connect Brooklyn to Manhattan at the island’s southern tip. The bridge would stand as a testament to Moses’s vision and ability, reasons why he preferred the size and scale of a bridge to proposals for a tunnel connecting the boroughs.
The plan was introduced on January 22, 1939, and after a few months of bitter resistance from opponents who both hated its design and Moses, the bridge was approved by the city and state. All that remained was a nod from the Federal Government and the War Department. Despite the expected approval, the War Department nixed the plan for security reasons.
Moses attempted to have the White House intercede, but to no avail. Then-President Franklin D. Roosevelt had been waiting on an opportunity to exact revenge on Moses. While Roosevelt was governor of New York in the late 1920s, the urban planner had cut off funding for his parks commission. So instead of Moses’s bridge, plans moved forward for a tunnel. “On October 28th, 1940, construction began on the Brooklyn Battery Tunnel, which Moses had so adamantly tried to scuttle,” reads Never Built. “President Roosevelt led the groundbreaking.” Sweet, sweet revenge. 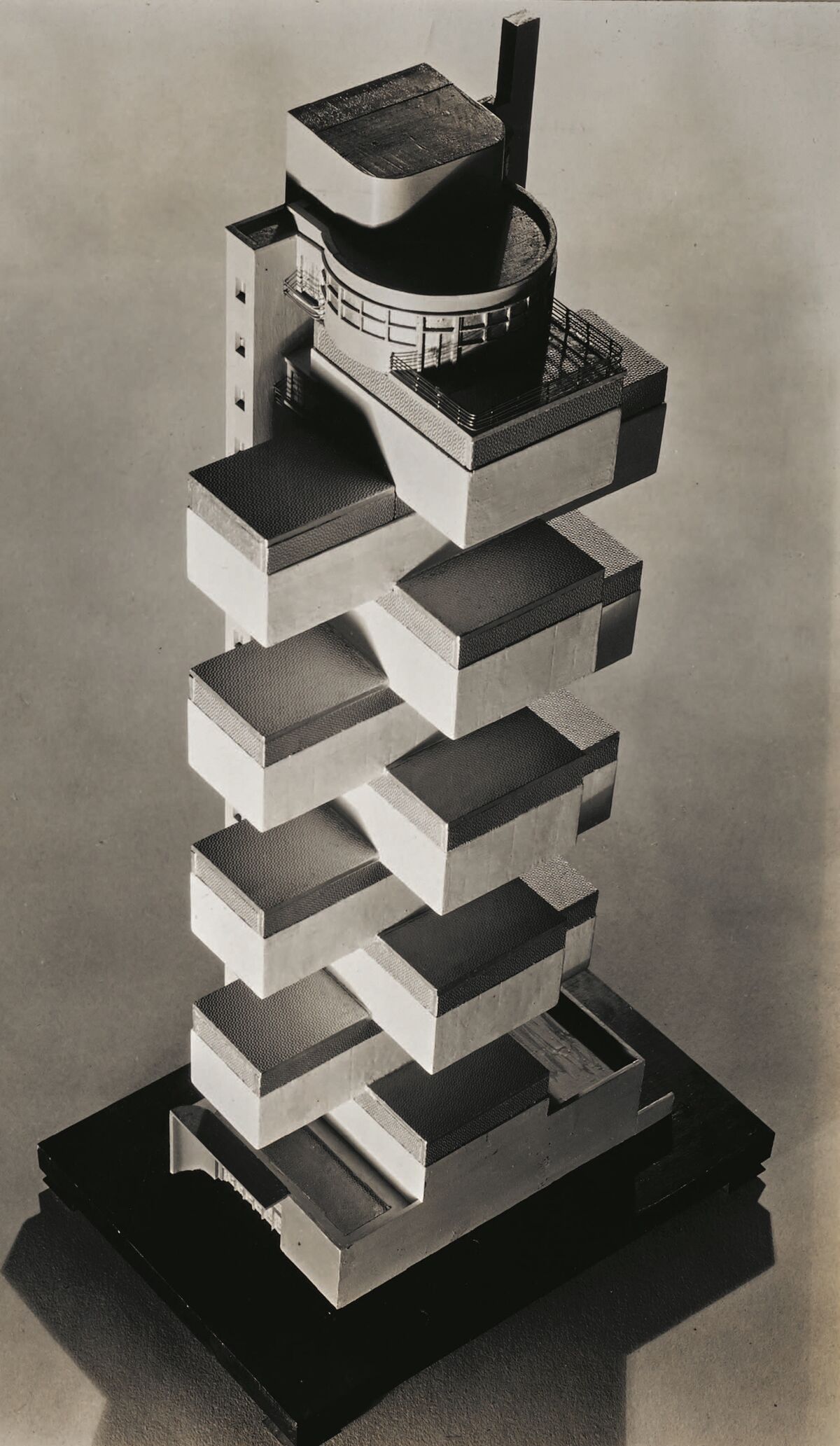 In 2019, the Museum of Modern Art (MoMA) will finish a massive expansion and redesign of its Midtown Manhattan home, significantly increasing gallery space. But innovative architecture has always been a part of the museum’s history. In 1930, after the MoMA’s trustees approached architects William Howe and George Lescaze to design the institution’s inaugural home, they submitted six schemes—blocky and
modernist
creations not normally ascribed to museums.
“A far cry from the neoclassical museums rising across the world at the time, the stacked buildings were indicative of not only the industrial ethos of modernist architecture, but also the rearranged abstractions of cubism,” write Goldin and Lubell.
The most “ambitious” of the designs, according to the duo, was number four, which featured cantilevered galleries taking the form of a jenga tower about to topple. In the end, Howe and Lescaze didn’t get the job. Some have chalked this up to the plot of land that had been selected for the institution (too small for the designs); others say that the museum’s board “objected to commissioning Lescaze because he was a foreigner,” according to a note written by Lescaze, left in his archives. Regardless, the museum did reject formalism in its final design, commissioning Edward Durell Stone and Philip Goodwin to create the modernist building that opened in 1939.
Isaac Kaplan is an Associate Editor at Artsy.
Related Stories