Josh Feola
Aug 1, 2018 8:00am
If you’re visiting Beijing and looking to see some art, the 798 Art District will likely be your first stop. Situated in a series of
Bauhaus
-inspired factory buildings originally constructed in the 1950s, 798 was reborn as an arts hub in the 1990s, first attracting students from Beijing’s prestigious Central Academy of Fine Arts (CAFA), and later private institutions like UCCA and dozens of commercial galleries. But, away from the epicenter of Beijing’s contemporary art scene made up by 798 and nearby Caochangdi, a diverse series of alternative spaces have been cropping up for well over a decade.
Many of these spaces, such as the pioneering Arrow Factory, are located in Beijing’s distinctive inner-city alleyways, or hutongs. Indeed, the five galleries profiled here have taken over non-traditional locations including a hair salon and a former convenience store. Because of this, they’ve also faced an increasingly precarious existence as the city continues an ongoing campaign to clean out its historical central axis in a bid for UNESCO World Heritage status. 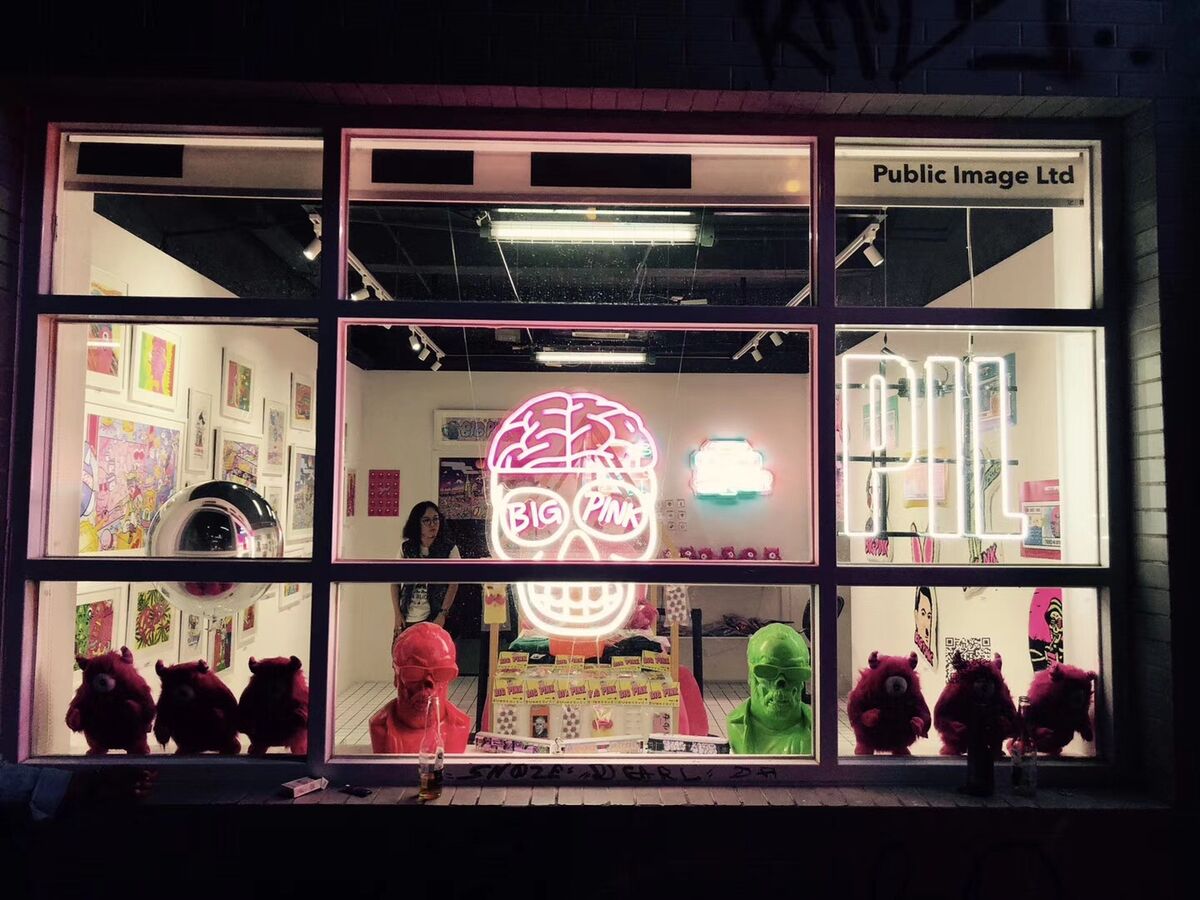 PiL was founded by designer Pang Yachuan in April 2017. It’s located between Beijing’s Drum Tower and Nanluoguxiang, a hutong that has been developed into a thriving tourist hub over the last decade. The gallery is named after Public Image Limited, the post-Sex Pistols project of punk vocalist John Lydon (a.k.a. Johnny Rotten), and its immediate neighbors are Dada and Temple Bar, popular destinations for late-night clubbing and blaring rock ‘n’ roll, respectively.
Utilized intermittently during the day by a group of freelance designers, PiL comes to life as a gallery only at night. There aren’t specific business hours, and Pang prides himself on operating “Beijing’s only nighttime art space,” with events sometimes ending at dawn.
Compared to traditional galleries, “PiL is more willing to promote the existence of unique and alternative ideas,” Pang says. He emphasizes “radical” and “experimental” exhibitions, offering to artists he finds interesting the opportunity to exhibit their work, hold salons, and develop merchandise. Recent events have included a performance by experimental rock band Whale Circus and an exhibition of work by poster designers from the Chinese alternative music scene, including a spread of lurid prints by famously risqué illustrator Tony Cheung.
Though he takes commission on works sold at PiL, Pang says that profit is not his primary concern. Instead, he says his vision for PiL is “to discover the existence of unique and alternative ideas, to be a new kind of art institution with the most imagination and independence.” 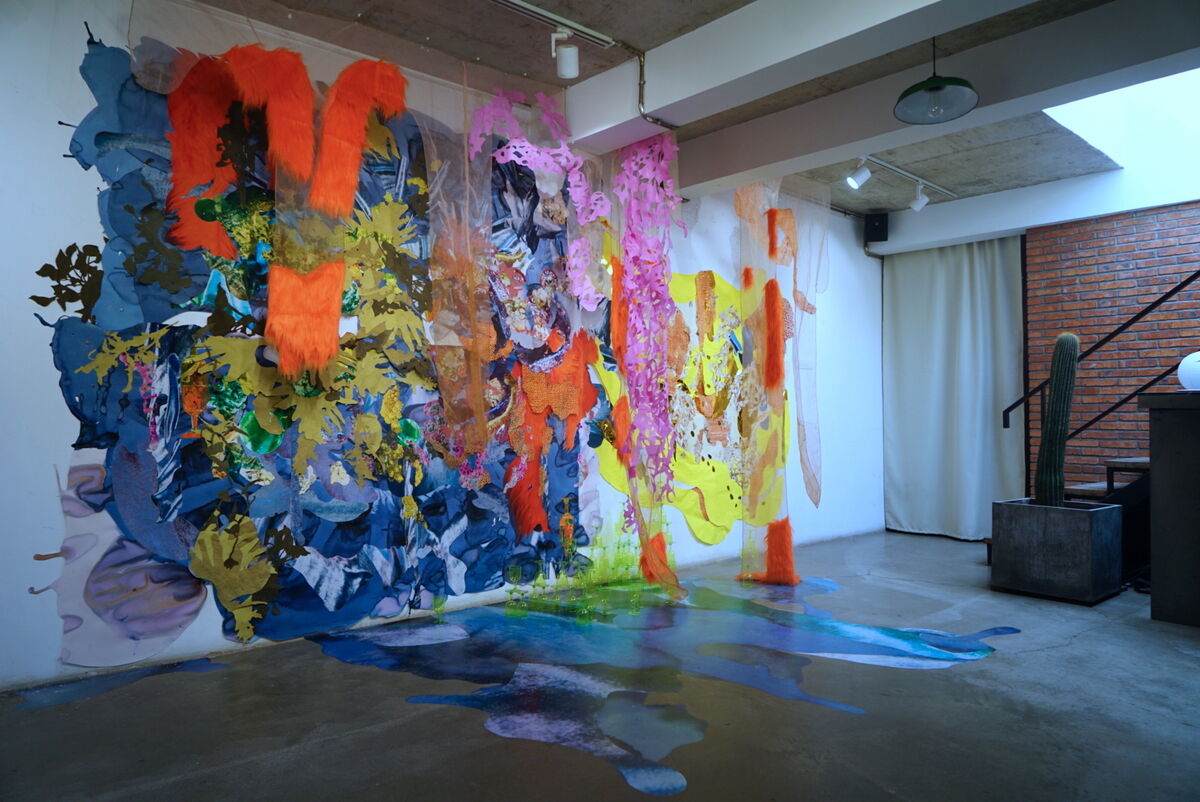 Advertisement
Occupying a sleek, modernist hutong storefront, Aotu Space doesn’t register as an art gallery at first pass. It also doesn’t quite look like a hair salon, even though that is the main trade of its proprietor, Ray Wu.
Aotu opened in late 2014 after Wu and co-founder Pilar Escuder met at the (now defunct) arts co-working space HomeShop, an early magnet for creative energy in the hutongs. Wu had been working as a stylist at Toni & Guy, but wanted to go solo. Meanwhile, his partner was looking for a curatorial space to showcase art and design created by their peers. Aotu quickly became a hub for the diverse network of artists, designers, musicians, and filmmakers that make up Beijing’s multidisciplinary creative scene.
In addition to DJ events and screenings, the space has hosted a variety of exhibitions by young artists, dabbling both in traditional and new media. One memorable show, mounted by the residency I: project space and Beijing-based design company Lava, involved an augmented reality treasure hunt that played out as both a critique of smartphone over-reliance and a vivid way to bring flat images into three dimensions.
Aotu faced down an existential threat last spring, when it received a two-weeks’ notice from municipal construction crews that it would lose the floor-to-ceiling windows on its first floor, as well as its entire second floor, where Wu had installed his hair salon equipment. Wu and his collaborators responded with a crowdfunded performance art series, and were able to rebuild the gallery’s façade and rooftop terrace. (A small stool and mirror suffice for Wu’s haircutting business today.)
Wu has also taken on the curatorial side of the operation, most recently hosting an exhibition of delicate, natural-dye paintings by CAFA lecturer Mary Johnson. While Wu recognizes the need for commercial activity to maintain an art space, he sees Aotu’s core function as a public good. He says that the shows and other “content provided by the art space enriches community life, and plays a role in broadening people’s horizons and inspiring imagination—this social value is what we strive to pursue.” 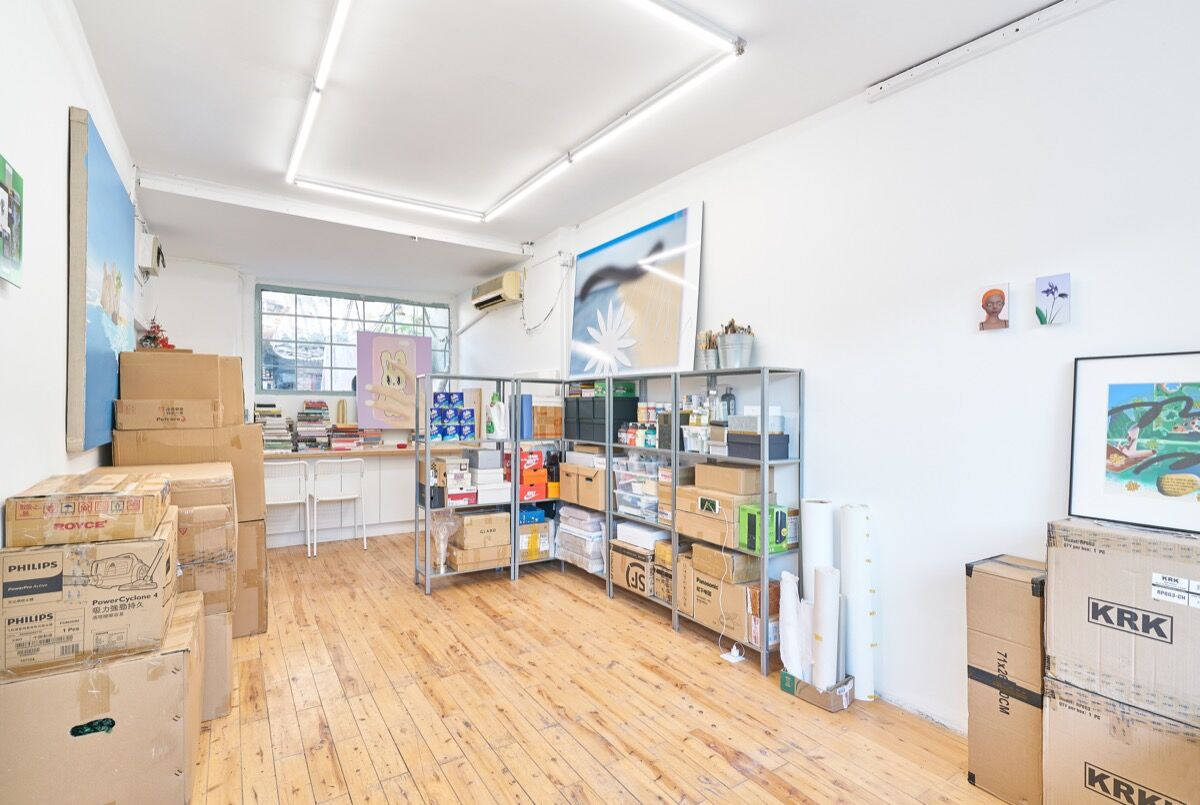 Salt Projects is another one-room hutong space, located near Beijing’s historic Drum and Bell Towers. Co-founded in 2016 by critics and curators Yuan Fuca and Liya Han, Salt is a self-described “curatorial studio”: Rather than mounting traditional exhibitions, the space places greater emphasis on hosting performances and talks, and on creating publications.
Salt was previously a convenience store, and retains something of its former function in the small selection of art books and magazines that line its walls. From the beginning, the space has gravitated towards artists who don’t fit comfortably within the commercial gallery circuit: Its first solo exhibit, “Triptych,” featured collaged images of forensic cadavers assembled by CAFA graduate student Lei Ming.
Many of the artists exhibited at Salt Projects were born in the late 1980s or ’90s, and work explicitly with the internet. For example, the gallery’s latest show of Shanghai-based artist
Rui Wang
’s work takes the experience of surfing the endless stream of data at our fingertips as its theme.
But Salt Projects’s future is uncertain. In August, the gallery expects to lose its front entrance to the same bricking crew that claimed Aotu’s façade around this time last year. However, Yuan says that she and her team will keep moving forward. “We are serious about becoming a real institution with solid funding,” she says, noting that this alone is no small feat. The first step on that front is a book about Salt’s curatorial approach, which the founders plan to publish next spring on the occasion of the space’s third anniversary. 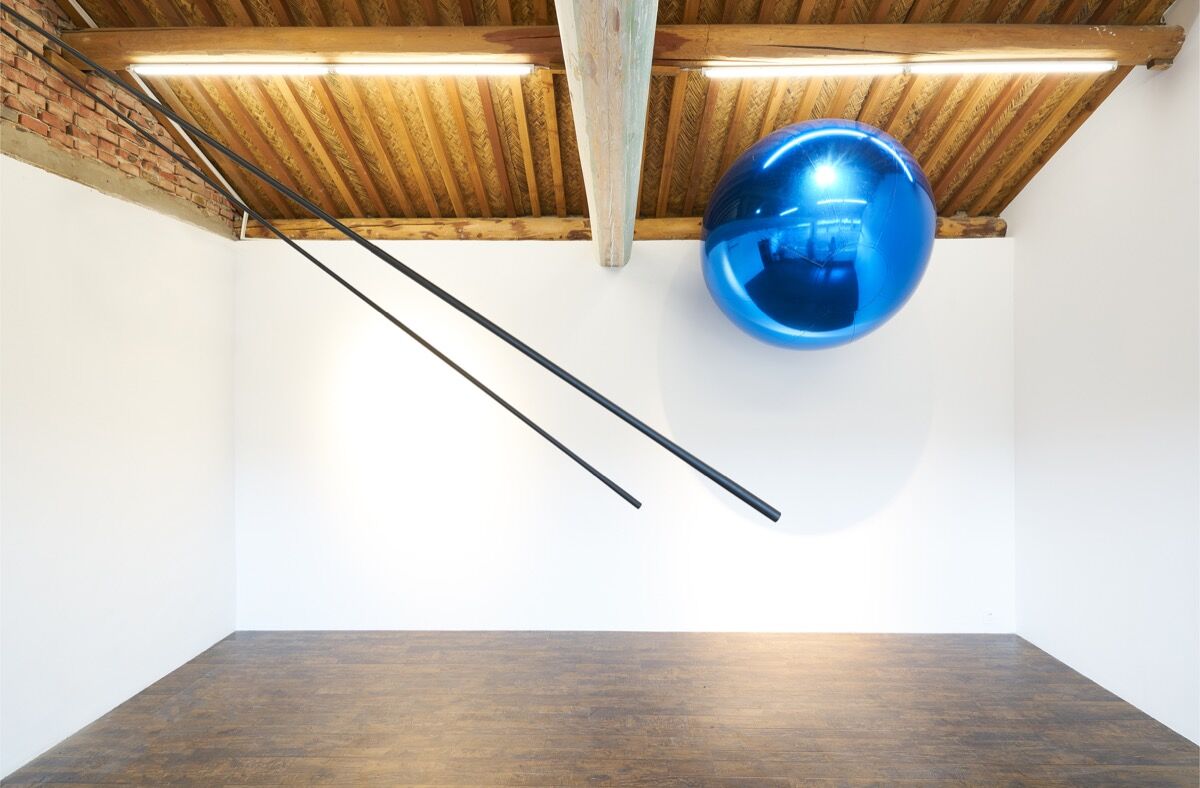 The creep of urban renovation may also present a problem for Wyoming Project, yet another small hutong gallery. It was opened last August by writer Li Bowen and photographer Sun Shi, who had previously shared a studio together in the nearby Fangjia Hutong—a vital artery of alternative culture until the bricking process forced most of the small bars and restaurants in the alley to close last year.
“For me personally, I think if I’m not doing it now, maybe I will never do this,” says Li, who studied dance at the renowned Shenzhen Arts School before pursuing dual bachelor’s degrees in the arts. Li and Sun both work in the art world—Li as an editor and Sun as an installation photographer—and, in turn, pour their earnings into their nonprofit space.
Li says that he and Sun want to provide space for experimentation, pointing to a show they held in 2017 for painter
Gao Ludi
as an example. Half of the production cost was provided by Gao’s gallery, White Space Beijing, a traditional white cube in Caochangdi, but the show consisted of an installation piece specific to the room, as opposed to traditional show of his paintings for sale. Li says the show was a “win-win situation”: It was affordable to produce, and it gave the artist a chance to create an installation “very different from his usual practice.”
Like Salt Projects, Li and Sun have heard that their gallery may soon lose its only street-facing entrance, which would force them to carve a door out of a long wall that currently faces inward on a quiet cluster of residential apartments. Li remains optimistic about the space’s near future, however, as well as the small collection of alternative spaces still operating in the hutong. “I identify this as sort of a new wave—but it might be another short-lived wave,” he says. 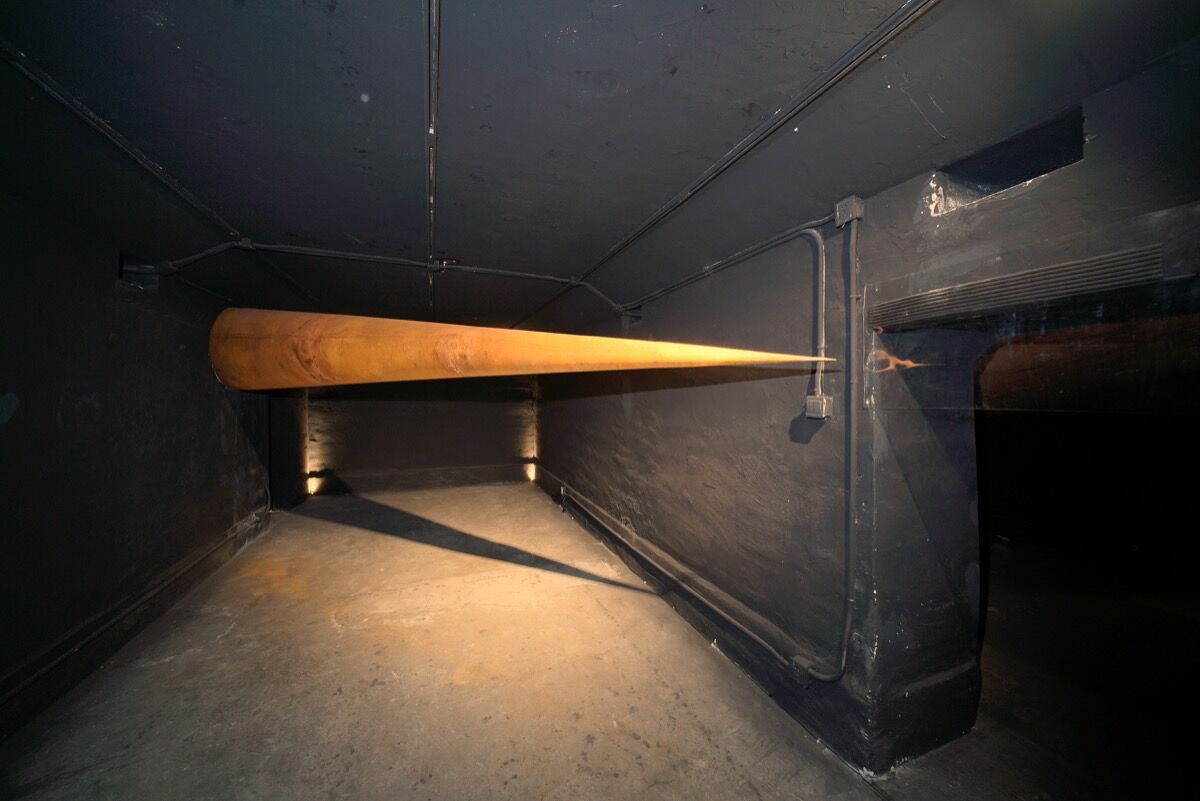 Installation view of Huang Huan and Alexandru Damboianu, “The Burden of Cultures” at The Bunker, Beijing, 2018. Courtesy of The Bunker.

The Bunker, another recently opened alternative space, will host a portion of Wyoming Project’s next show: a triple-venue exhibition for multimedia artist
Zhang Ding
. (The remaining third of the show will be posted by KWM artcenter, a gallery supported by the law firm King & Wood Mallesons.) More black box than white cube, The Bunker is an underground chamber that functioned as a command center for occupying Japanese forces during World War II. It has been owned by Renmin University since the establishment of the modern Chinese state in 1949, and last year, it became an art space when founder Peng Xiaoyang secured a long-term lease.
The Bunker is actually one of three spaces founded by Peng: In December 2015, he inaugurated DRC No. 12—a repurposed residential apartment in one of Beijing’s diplomatic residence compounds—and Tattoo Parlour, an empty storefront with a revolving program of installations mounted without signage next to an upscale hotel. “Passers-by are transformed into the audience, and the social environment is transformed into an exhibition environment, which enlarges the social communication of the exhibition,” Peng says of Tattoo Parlour’s setup. He also notes that, given its location in another area targeted by Beijing’s renovation project, it “may be demolished at any time.”
Peng says that his three spaces are united in a mission to “stimulate artists to use their imagination and creativity.” The Bunker, in particular, invites a conceptual approach due to its architectural particularities: Located at the bottom of a steeply plunging concrete staircase, its interior space is narrow, claustrophobic, and completely void of natural light.
Exhibitions at The Bunker are selected by a committee chaired by artist and curator
Colin Siyuan Chinnery
, who sees in The Bunker an opportunity to invite artists outside of their comfort zone. “We have seen a serious decline in conceptual and non-object based work in the past five years,” Chinnery says, “and I believe this is a result of an art world too heavily reliant on the commercial system. This isn’t good for art, artists, or the commercial sector in the long run. We need different kinds of practice, and if the commercial sector won’t support it, we need an alternative system that does.”
Josh Feola
Related Stories