Ariela Gittlen
Dec 28, 2015 1:00pm
While they hail from around the world, and work in a wide array of mediums, intriguing commonalities surface across these impresarios’ practices. Their resumes are multifaceted and, in many cases, their experience transcends traditional furniture or industrial design training. Some studied psychology, graphic design, or film; others have worked as jewelry designers or artist assistants. The resulting works—whether translucent, responsive light fixtures or bulging, biomorphic credenzas—blur the line between art and design, form and function.
Nearly all these designers favor natural materials and consider this focus integral to their practice. The increasing popularity of design as a tool for social good also came to the fore (see design luminary
Yves Béhar
receiving the Design Visionary Award at Design Miami/ for his humanitarian projects), as did the ascendence of the L.A. design scene and the growing number of women leading their own studios (four of the seven designers on our list are female). That’s a trend we can all toast with the turn of the new year.

b. 1988, Marseille, France. Lives and works in Eindhoven, Netherlands.

Since graduating from Design Academy Eindhoven in 2014, Delisse has already made a name for herself by harnessing the forces of design for social good. Her Day & Night light (2015) was recently named Life Enhancer of the Year by Wallpaper Magazine. Intended to combat the doldrums of Seasonal Affective Disorder (SAD), each lamp features a plate of dichroic glass that casts blue light in the mornings and warm tones in the evening, colors chosen for their stimulating and calming effects, respectively. The lamp’s design is straightforward—a circle of glass set in a wooden frame—foregrounding the atmospheric effects of light and color over elaborate forms.
Delisse is also one of the co-founders (along with fellow designer Laura Ferriere) of The White Building, a program and coworking space designed to ease the transition of incarcerated prisoners back into society through art and design residencies. During the pilot program, completed while the designers were a students at Eindhoven, prisoners collaborated with creative professionals, including a product designer, a performance artist, and a chef. Delisse’s humanitarian focus is inseparable from her design practice, which she sees as a way of fostering connections between people and their environment, stimulating learning, and addressing essential human needs.

Portrait of Nina Cho and photo of her Bent Mirror Series, 2014, courtesy of Nina Cho.

Advertisement
Born in the United States, raised in Korea, and now based in Detroit, Cho makes work that balances the cultural influences of her personal history and everyday surroundings. Trained in woodworking and furniture design at Hongik University in Korea, and later in 3D Design at the Cranbrook Academy of Art in Michigan, the designer’s output runs the gamut from sculptural furnishings to her “wobble containers,” small wooden disks and cups, sized for holding wallets or keys, that respond to slight movements—gently reminding you to grab your essentials on the way out the door. As a furniture designer, Cho describes her practice in terms of traditional Korean aesthetics—the negative space surrounding the object is just as important as the object itself.
Across her designs, Cho’s minimalist approach is activated by a sense of play. An early project, In, Side Table (2010) first appears to be an ordinary maple-wood table, but lifting its top reveals the warm glow of a paper lamp. The result is surprising and amusing, yet also practical—why not combine two objects so commonly used in tandem? A similar sense of economy bolsters Ideal Home Project (2013), where a chair, table, bed, and lamp combine as a single piece of furniture. In smaller objects, like those in her Bent Mirror Series (2014), sculpture and function fuse. Pieces of brass, copper, and stainless steel are polished to a high sheen and folded into architectural forms. Seen together, they resemble a shiny cityscape confined to a table top—but they could likewise be used as mirrors, paperweights, or bookends.
The coming year will be a busy one for Cho. After recently launching her new studio, she’ll be showing her work at exhibitions in the U.S., Canada, and Germany.

London-based Soft Baroque favors the poetic over the practical. The design studio, founded in 2013 by Royal College of Art master’s degree graduates Nicholas Gardner and Saša Štucin, caused a stir at the Salone del Mobile in Milan this spring with New Surface Strategies (2015), a suite of pine wood furniture inspired by
De Stijl
designer
Gerrit Thomas Rietveld
and Italian modernist
Enzo Mari
. Featuring a chroma key technique (similar to a green screen), the bench and chairs appear to be covered in an ever-changing variety of colors, patterns, and textures. The project can be seen as a critique of the mercurial design market, or an exploration of how digital representations can take the place of real objects.
Other works, too, marry conceptual vigor with clever mischievousness. Fireworks Chair (2015) was designed to shoot fireworks from its seat while retaining its structural integrity. Lenticularis (2014) is a wall mirror that releases a thick cloud of water vapor, which the designers describe as “a tool for dressing the body in scent.” Waterfall cap (2014) is a hat that, when switched on, emits a personal waterfall from its brim. The duo has shown their smart, experimental work at the Victoria and Albert Museum (V&A), Christie’s, Aram Gallery, and Greek Street, all in London, the Swiss Institute in New York, and at design fairs from Milan to Dubai.

b. 1979 Costa Mesa, California. Lives and works in Los Angeles. 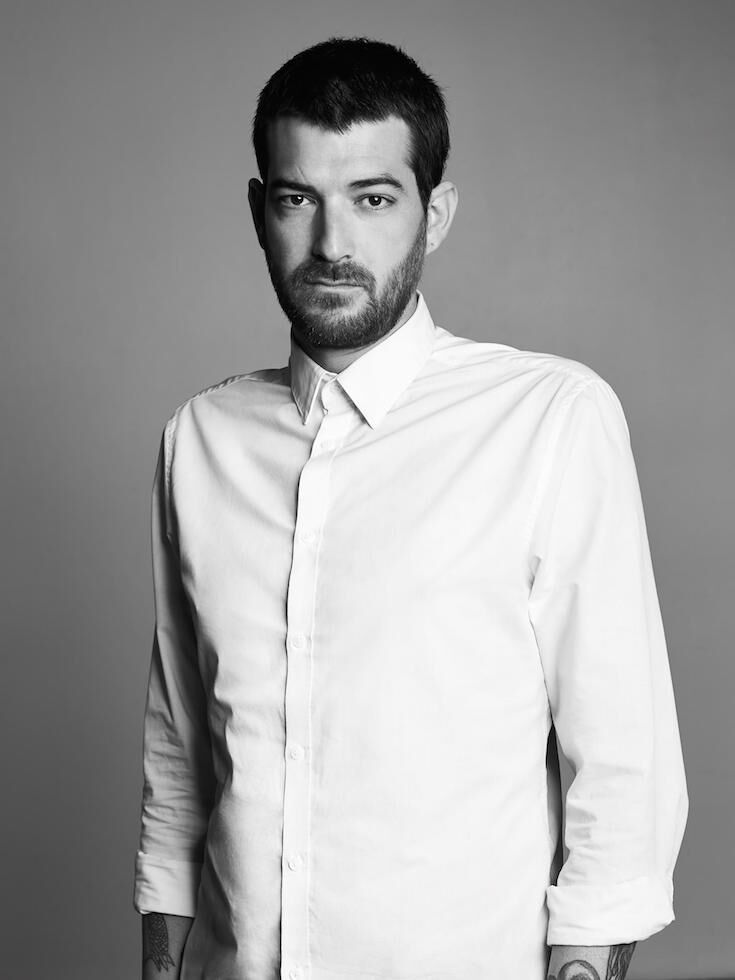 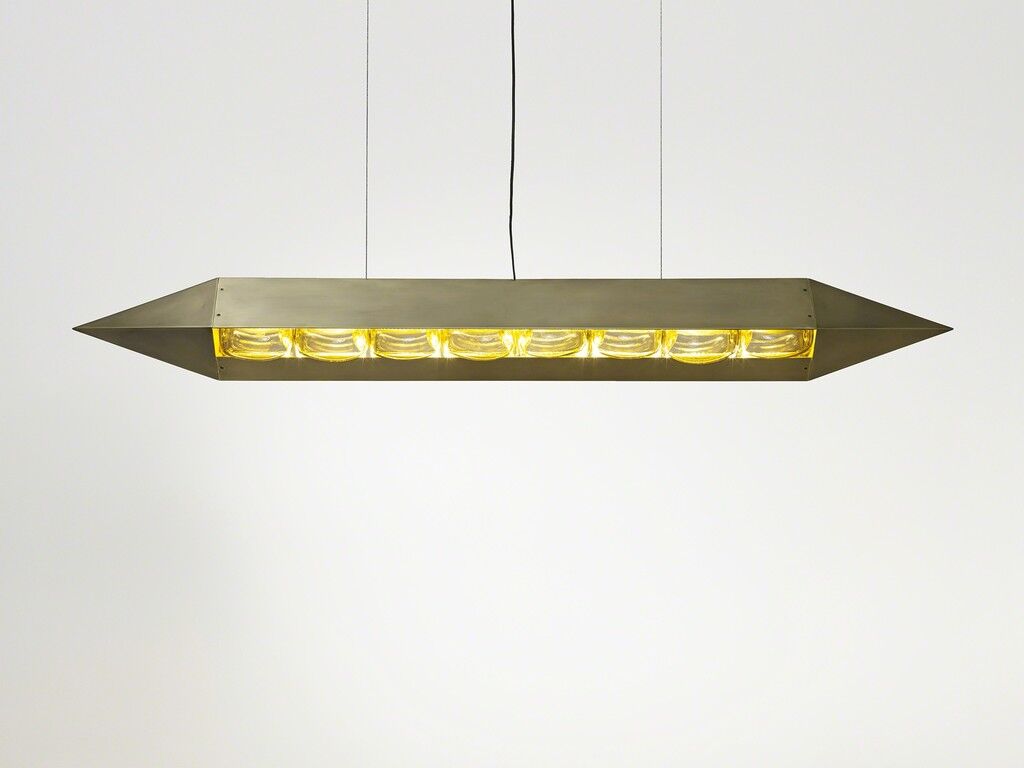 Brian Thoreen
Torpedo Chandelier, 2015
Patrick Parrish Gallery
A veteran of the art and design worlds, Thoreen has built a portfolio that ranges from websites to housewares and leather goods. The L.A.-based designer also found early inspiration working behind the scenes for artists such as
James Turrell
and
Peter Wegner
. He now designs architectural installations and design objects, as well as furnishings.
In a recent interview, Thoreen emphasized the importance of taking big risks, both personal and professional, and his own work belies this advice. Big, bold, and sleek, his debut collection includes Mixed Marble Coffee Table (2015), a heavy, elegant form complete with a base divided into three massive brass legs and a top pieced together from marble slabs. Rubber Credenza (2015) is equally stately but comes with a surprise. Slipping a hand into one of its drawer pulls—covered in rubber, that industrial, rather unorthodox material—makes for both a pleasant and unusual sensation. While perhaps less inviting to the touch, Torpedo Chandelier (2015) has its own tactile appeal. Its polished brass hull, which terminates sharply at both ends, resembles a wickedly pointed pencil.
Since making a splash at Design Miami/ in December, Thoreen has a slew of projects in the works, including a sculptural installation in the old Coca-Cola building in downtown L.A., a collaboration with up-and-coming designer
Kristin Victoria Barron
.

Only Love Is Real

Matthew and Carly Jo Morgan are a married couple, parents to a daughter (who inspired their collaboration), and a design team of growing renown. Their studio, dubbed Only Love Is Real, is nestled in the desert outside of Los Angeles. There, as the name suggests, a certain kind of California mood dominates—Distant Vibes, Peach Portal, and Shroom Poofer are all titles that grace the furniture in their collection, which feels alternately influenced by
R. Buckminster Fuller
, the
Arts and Crafts movement
, and ’60s hippie culture. Almost every stage of the production process is completed by the Morgans, who value craft and the idiosyncrasies of handmade pieces.
The emphasis on elementary shapes and handmade construction lend some of the Morgans’ work a mystical air. The Professor Chair, a walnut seat with a wide bench and sharp triangular back partially enclosed in a circle, resembles an occult symbol or astrological sign. Rainbow, an arc-shaped bench upholstered in purple, orange, red, and blue suede, suggests a connection to the natural world as well as the spiritual one (rainbows are often a symbol for peace and fulfillment). Slanted and Enchanted, a walnut étagère with glass shelving and marble base, serves as both a shelf and a geometry puzzle. How many triangles can you spot inside it?
The Morgans’ work is currently being showcased at Austere’s “Site-Specific: L.A.” exhibition, curated by Sight Unseen. Their plans for the coming months include a sculptural landscape project and setting up a ceramics studio.
Ariela Gittlen
Related Stories