5 Famous Artworks That Were Accidentally Destroyed

Mitch Sawyer
Aug 18, 2017 10:01am
The art world is filled with stories of artworks lost to the ages. Alongside pieces that were never meant to last or public art subsumed by the march of urban development, countless works have been destroyed in transit, were caught in the grips of war, or have simply vanished. In some cases, their images have outlived the destruction of their physical paint and canvas through photographs or copies or alternate versions. Here are five notable works that, despite the destruction of their originals, remain known today. 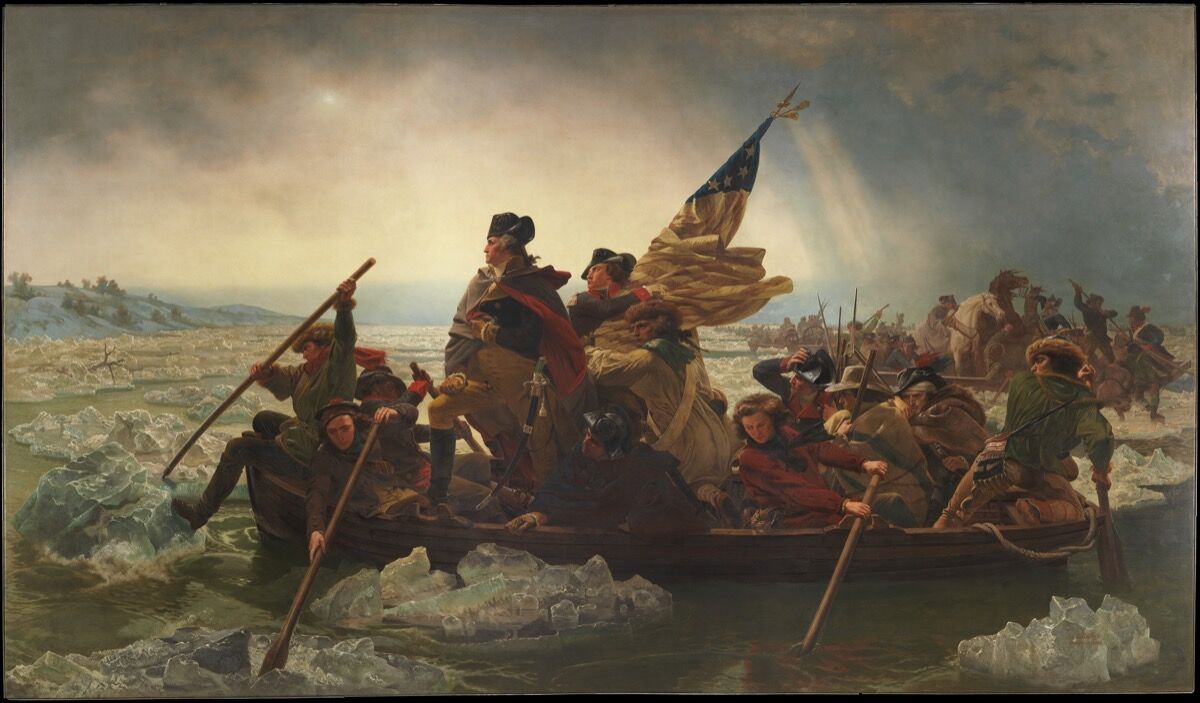 Emanuel Leutze, Washington Crossing the Delaware, 1851. Courtesy of the Metropolitan Museum of Art.

Leutze
’s celebrated oil painting depicts a steel-gazed George Washington and his crew forging the icy waters of the Delaware River in an early-morning ambush during the Battle of Trenton. Visitors to New York’s Metropolitan Museum of Art can still find the scene depicted in a monumental 21-foot canvas, which occupies an entire wall of the institution’s American Wing. But that version, however, is not Leutze’s first depiction of the scene.
A German immigrant who spent his childhood in the United States, Leutze had returned to his homeland by the time he began working on the first of three versions of Washington Crossing the Delaware. The original painting barely survived a year. In 1850 a fire swept the artist’s studio and as the canvas was cut from its frame in order to rescue it, causing several tears.
Fortunately, it was restored that year and acquired in 1863 by the Kunsthalle Bremen in Germany. The work remained in Bremen until World War II. On September 5, 1942, collateral damage from an Allied airstrike on Bremen destroyed the work. Leutze’s painting depicted war in the light of heroic glory, but was ultimately destroyed by war’s cold indifference. 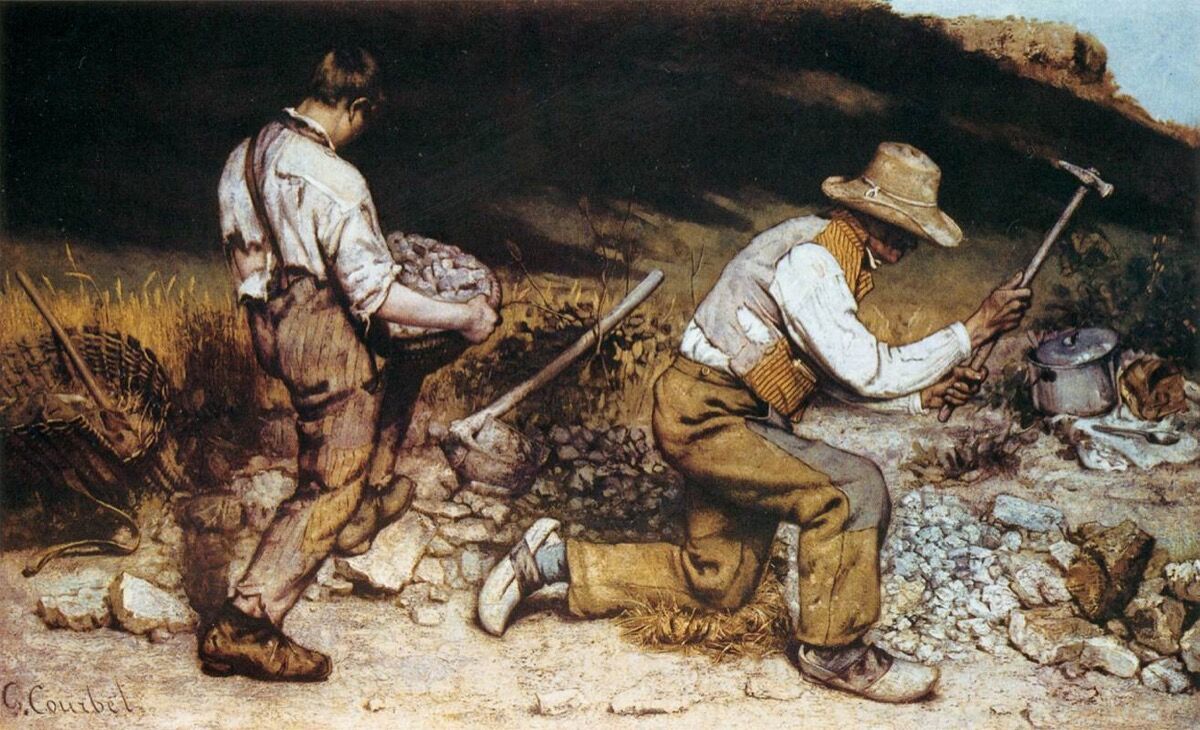 Advertisement
Courbet
’s portrait of two laborers breaking stones at a roadside camp is one of art history’s most significant works. The piece exemplifies
realism
, a style that embraced unglamorous subjects and captured scenes of everyday life, a break from fine art’s traditional proclivity for wealthy and religious subjects. Somewhere between 30 and 80 years after its creation, The Stone Breakers and roughly 90 other works were acquired by the estate of the late German businessman Max Heinrich Eduard Pröll-Heuer. A lifelong resident of Dresden, Pröll-Heuer donated his acquisitions to the contemporary art collection hosted at the city’s Gemäldegalerie Alte Meister.
In 1945, British and American forces commenced with the infamous firebombing of Dresden. The bombardment razed more than 1,600 acres of the city center and left as many as 25,000 dead. In transit while the raids commenced, The Stone Breakers, along with 20 other works from the Pröll-Heuer collection, was destroyed during the attack. Even today, 450 of the works from Dresden’s art galleries have never been recovered.

When a small still life in oil by
Freud
arrived at Sotheby’s London in early 2000, the painter’s market was hot. Collectors were eager to snatch up any and every work by Freud. Just two years prior, a painting of an interior by the artist fetched $5.8 million at a New York auction, and in 1999, a painting of the artist’s mother earned $3.3 million.
But this particular Freud still life never made it to the auction floor. Upon arrival, the crated work was mistakenly placed in an area of Sotheby’s warehouse where empty crates are left to be disposed. Two workers fed the case into a crushing machine. The mistake was only realized after the painting failed to arrive at the auction house, prompting staff to review security footage. A spokesperson for the auction house commented that situation was “most unfortunate” but ultimately a “human error,” The Guardian reported.

Unidentified Photographer, Lunch Atop A Skyscraper (1932) 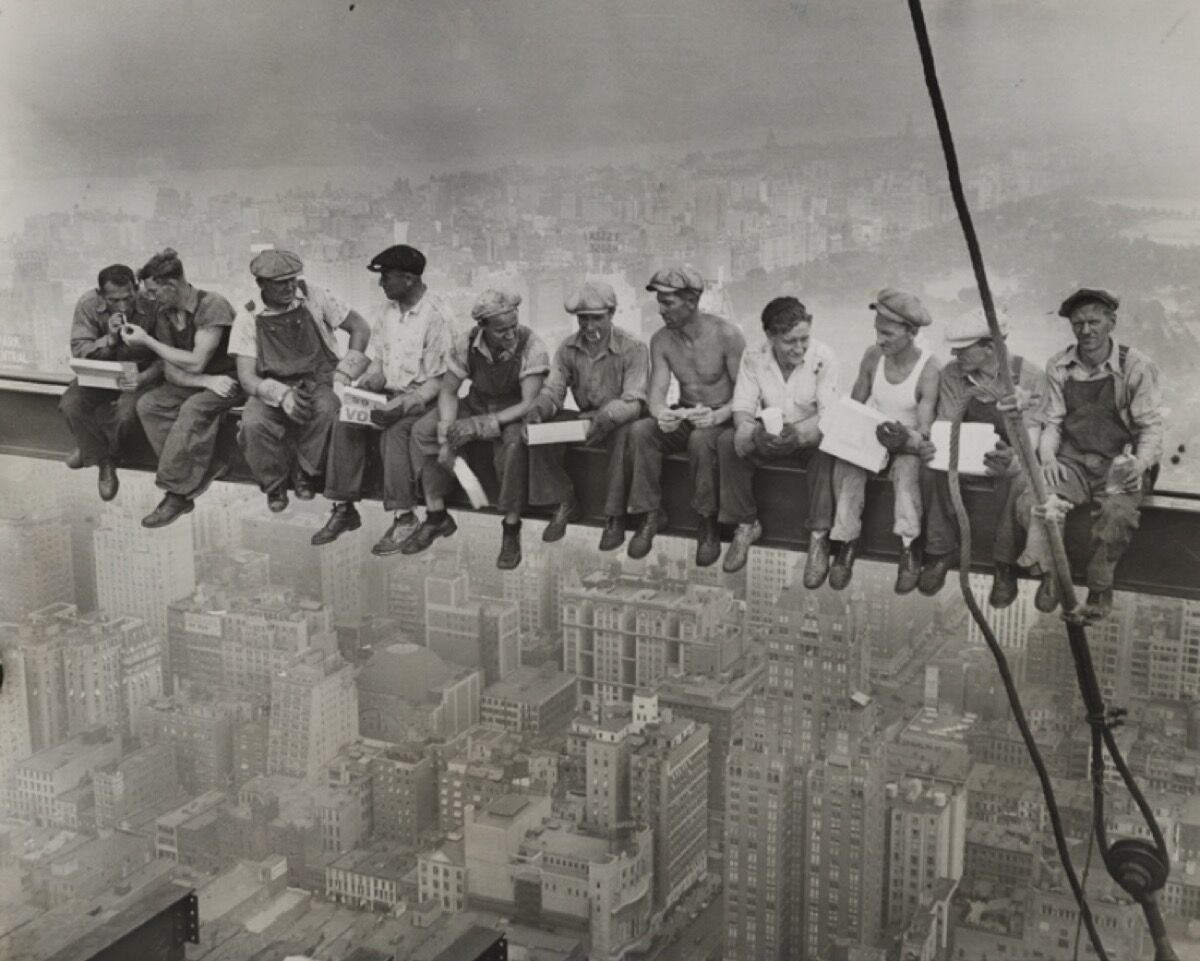 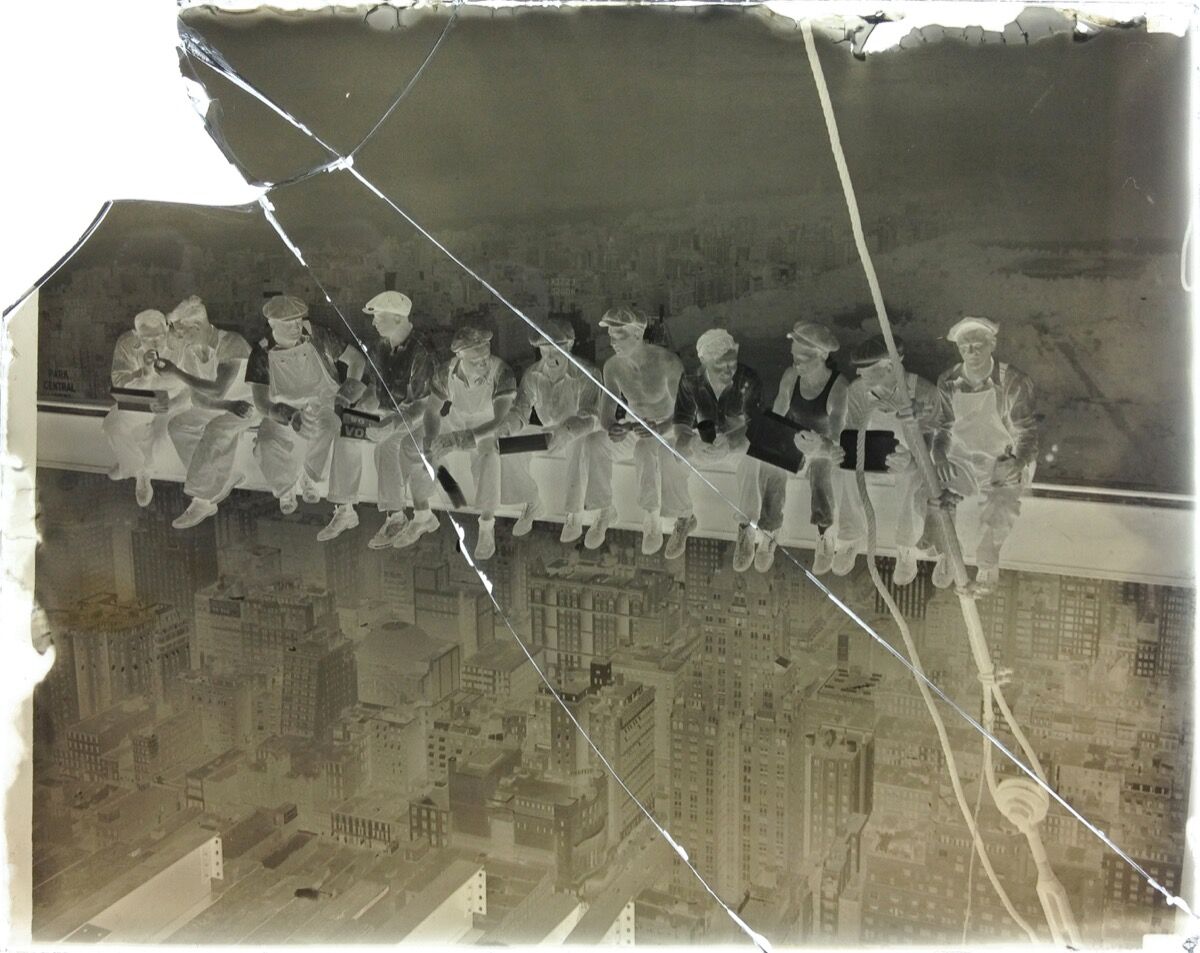 The original cracked glass negative of Lunch atop a Skyscraper.

The photo of 11 construction workers taking their lunch on a girder 800 feet above the ground is among the most recognizable images of New York and an emblem of Depression-era determination. But for how widely reproduced as the photograph is, there is very little known about it. Thought to have been taken September 20, 1932, recent discoveries indicate it may have been taken nine days earlier. And while many have come forward claiming to be one of the photo’s subjects, the true identities of the workers remains a mystery.
On top of this, any version of Lunch circulating today is likely to be a reproduction of a reproduction. The original glass plate negative is housed as part of the Bettmann Archive in an underground limestone cave in west Pennsylvania. You’re unlikely to see new prints from the negative anytime soon: It is missing a sizable piece of its upper left corner and, after being dropped in 1996, is splintered into five pieces. Only one original print remains. The print, which carried a price tag of $126,500, was shown at Daniel Blau’s booth at Frieze earlier this year.

On September 2, 1998, the pilots of a Swissair jet traveling from New York to Geneva sent out a distress call after detecting smoke in the plane’s cockpit. An electrical fire caused the jet to spiral into the Atlantic Ocean, less than 10 minutes from an emergency landing site in Halifax. Of the 229 passengers and crew members on board, none survived.
Also listed on the plane’s manifest were 110 pounds of cash and gold, four pounds of diamonds, 14 pounds of watches and jewelry, and one painting by the legendary
Cubist
Picasso
. Le Peintre was one of six works produced in 1963 that depict a bearded artist-figure in the midst of painting. At the time, shippers placed the lost work’s value at around $1.5 million. While extensive rescue efforts recovered much of the wreckage and human remains, the treasure is missing to this day. Unfortunately, to cut costs, shippers elected not to designate Le Peintre valuable cargo. Its wood crating was not exactly waterproof, and wouldn’t have withstood the impact anyway, according to a Swissair representative at the time.
Mitch Sawyer
Related Stories