On an autumn afternoon during my first year of design school, I sat near a low chain-link fence in Central Park, sorting leaves by color. Then I wove them through the links of the fence, creating a gradient that turned from bright green to golden yellow. Around me, my classmates were occupied with building small sculptures out of twigs, stones, and grass—resembling the work of either dedicated children or very coordinated squirrels. The sun was warm and the park smelled pleasantly of cut grass and horse manure. Tourists and dog-walkers gave us curious looks.
This wasn’t a case of art student whimsy; we were dutifully completing a class assignment. We had just watched Thomas Riedelsheimer’s 2001 documentary Rivers and Tides: Andy Goldsworthy Working with Time. In it, we saw
Goldsworthy
, a lone figure surrounded by nature, creating sculptures in his peculiar and dogged way: carefully balanced stones, sticks held together seemingly by magic, and leaves floating in a unwinding spiral formation as they followed the current of a stream.
Goldsworthy creates ephemeral works from unstable materials like light, water, and ice that mainly survive only as photographs. There are also more durable, public installations of wood or stone, such as Five Men, Seventeen Days, Fifteen Boulders, One Wall (2010), a 2,000-foot-long fieldstone wall that winds like a ribbon between the trees, disappears into a pond, and emerges on the opposite bank.
Riedelsheimer has just released a follow-up documentary on Goldsworthy, Leaning into the Wind, and watching it reminded me of that long-ago afternoon in the park. It made me ponder what I’d learned playing Goldsworthy for a day. Can exercises inspired by his practice teach us how to best approach our own creative work? Like transcendental meditation or the board game Go, the rules of Goldsworthy’s practice seem tantalizingly simple—something that anyone can attempt, without ever really mastering.
When I speak with Goldsworthy, I ask him to imagine a hypothetical school based on his work—a place for others to follow his lead. He is polite, but horrified.
“I think that would be really strange,” Goldsworthy tells me. We’re on the phone, but I suspect he’s cringing a little. What he does isn’t intended to be didactic, he explains, and instructing someone to imitate the work would run counter to its very purpose. “Also, I’m not a great teacher,” he adds. “I know my limitations.”
Sadly, the Andy Goldsworthy Institute of Creative Exploration will never exist, but here’s a consolation prize: five lessons Goldsworthy’s work can teach us about how to live a creative life. 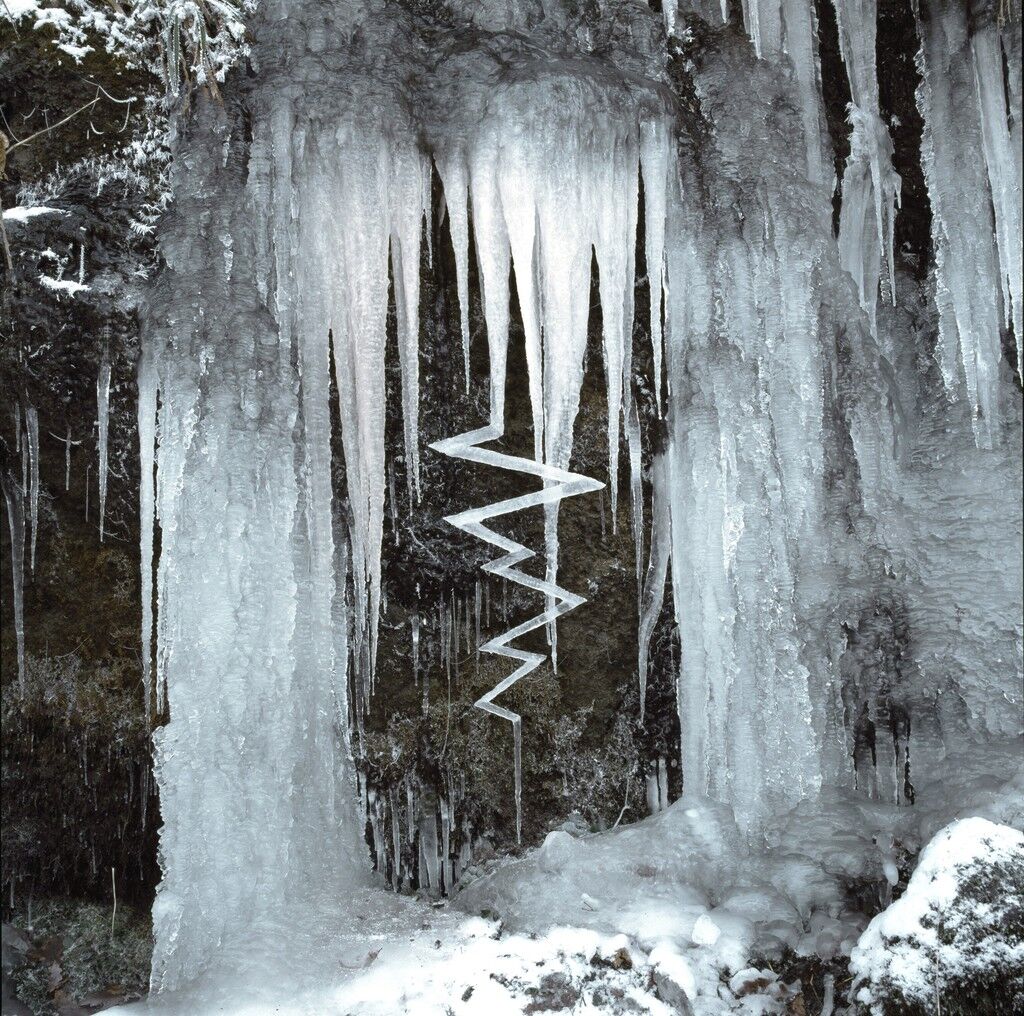 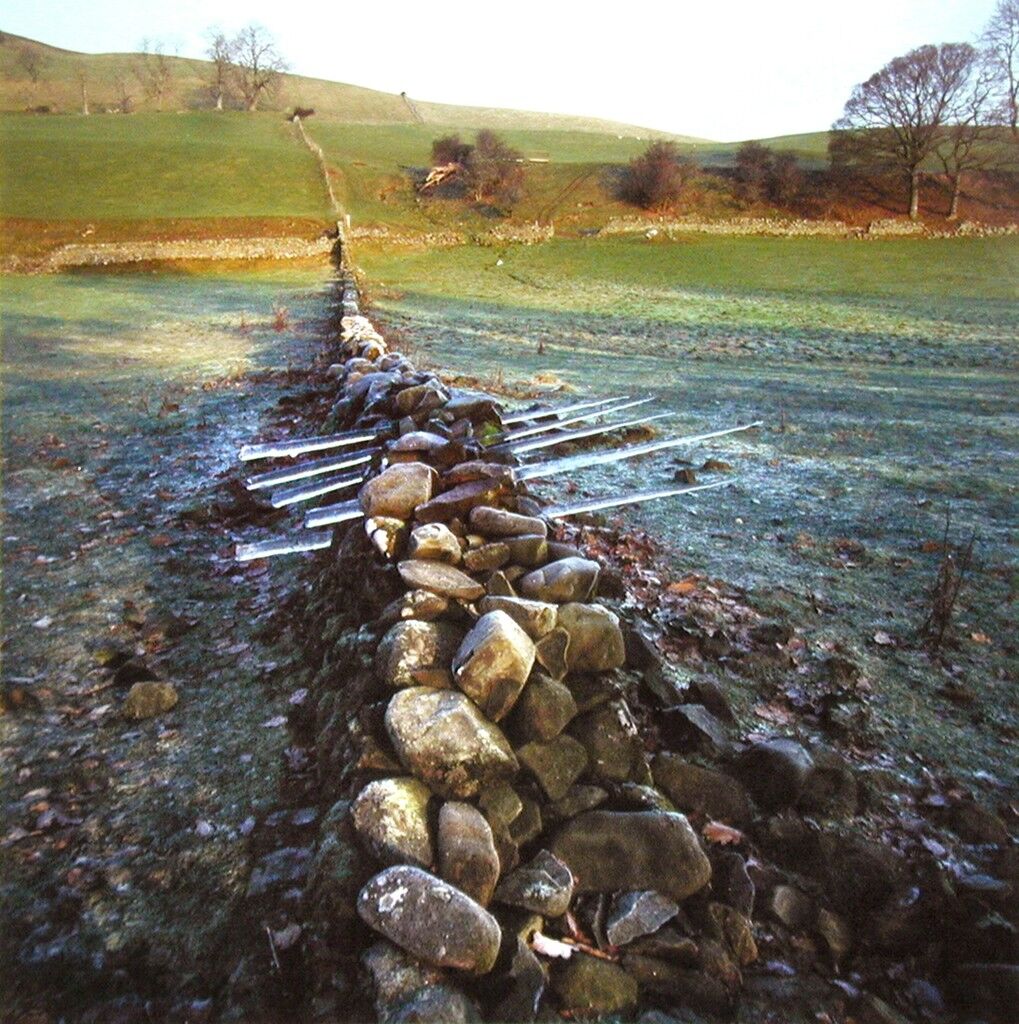 Andy Goldsworthy
Icicles and Wall, Scaur Glen, Dumfriesshire, 19 January 2001, 2001
Gallery Neptune & Brown
In Learning into the Wind, Goldsworthy lies on his back on a cement sidewalk at the start of a rain shower, only to rise a few minutes later, leaving a dry shadow on the ground. It’s one of the many moments captured in the film where Goldsworthy uses his own body to complete a work. The gesture is both beguiling in its simplicity, and excruciating in its disregard for social norms. (When a van drives by, it seems to pass frighteningly close to the artist’s head.)
It’s tempting to think that we, too, have something to learn from this simple exercise, which anyone could perform with the right pavement and precipitation, yet Goldsworthy is adamant that repeating his action would be fruitless. “It’s my own very personal response to the world, and that’s probably the best lesson that anybody could take from it—not that they should repeat or try to remake the things I’ve done,” he says.
In other words, rely on your own curiosity and intuition, and investigate what interests you most.

2. Embrace discomfort, and always push yourself Advertisement
Lately, the artist has experimented with traveling via hedge, as if the foliage is just another kind of staircase or garden path. “It is appallingly painful,” Goldsworthy says of his experiments in what he describes alternately as climbing or swimming through hedges. The film features several of these transits, some in which he crawls through leafy shrubbery (“I just got colder and colder until I was hypothermic when I came out the other end”), and another through naked branches laced with thorns. It’s painful just to watch.
“I’ve walked in thorn hedges, and have come out quiet bloodied at the other end, but I don’t really notice when I’m in there,” he says. Goldsworthy is unconcerned about personal comfort. He works outside in all kinds of weather, in torpid jungles and in icy English winters. At times, his practice resembles endurance performance, but these actions aren’t intended to test the limits of his body—they’re experiments meant to answer questions about the physical world. “I’ll never look at a hedge the same way again,” he notes. “As soon as you put a flower into your mouth,” Goldsworthy tells me, “you know the first thing you think?” I admit that I don’t.
“Is it poisonous?” he says. For a series of works he calls “Spits,” Goldsworthy fills his mouth with flower petals, then expectorates them out over and over again. This repetition emphasizes the strange beauty of the work, as well as the possible danger of the material. The “Spits,” Goldsworthy says, changed his understanding of flowers, from something pretty and ornamental to something that is potentially toxic. While looking at a pretty bouquet, we often forget that bright colors are often nature’s “caution” sign.
And always remember that aesthetic accomplishment often requires a sacrifice. “Bitterness begins to build up in your mouth, and then bits of the petals start sticking down your throat,” Goldsworthy says. “Sometimes I don’t know if I’m exhaling the flowers or vomiting them.” 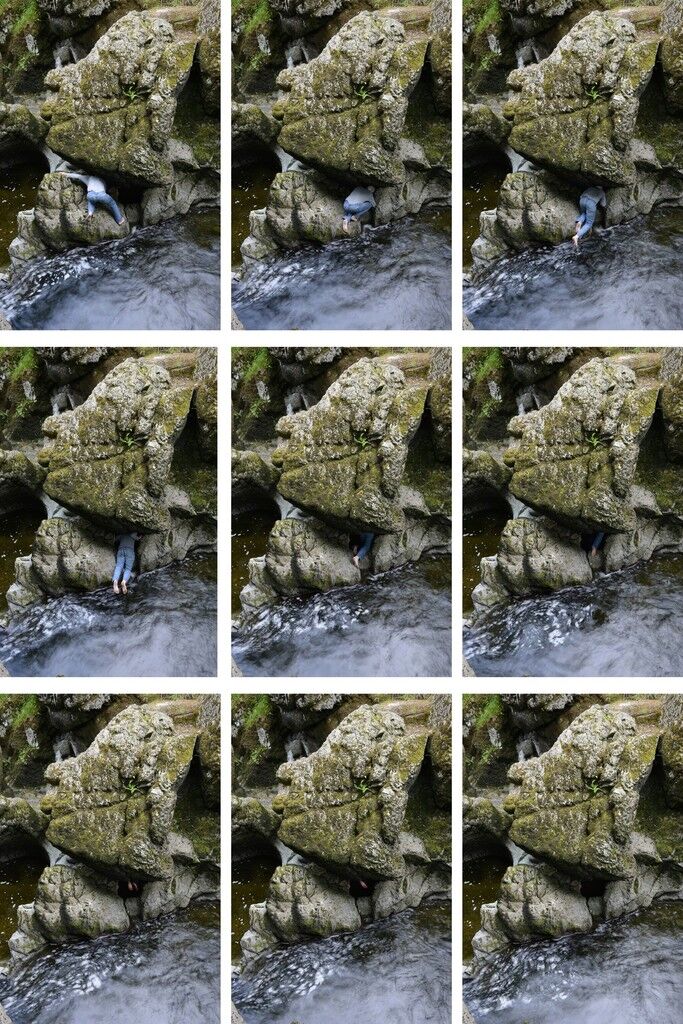 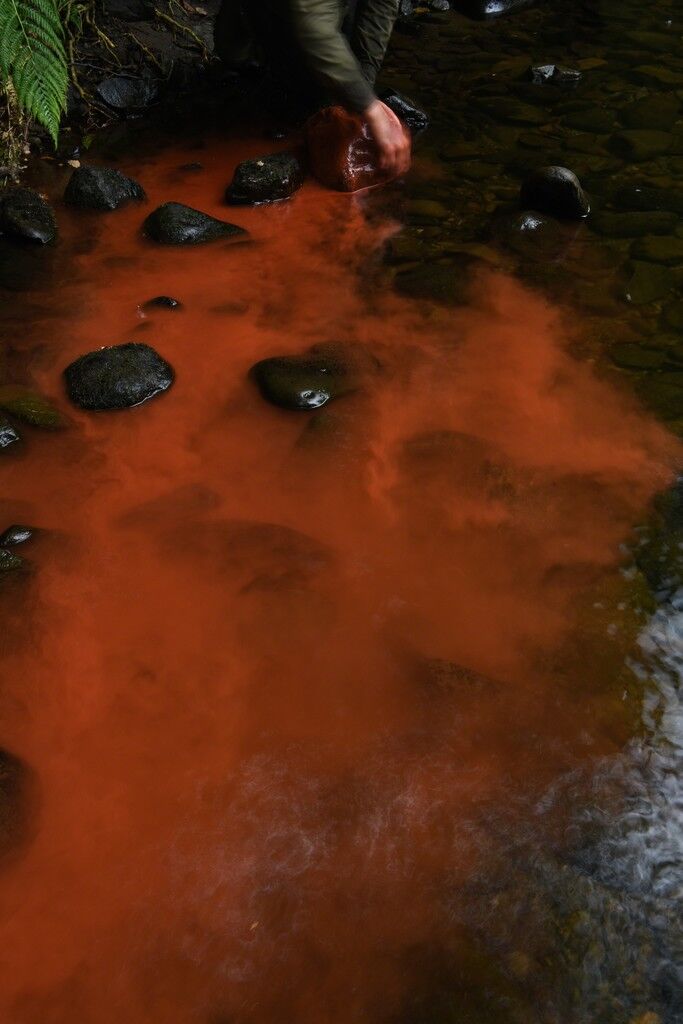 Andy Goldsworthy
Red river rock. Dumfriesshire, Scotland. 19 August 2016, 2016
Haines Gallery
During his 40-year career, Goldsworthy has revisited the same locations again and again (the green hills of England’s Lake District are a frequent backdrop in the new film). There’s even a particular tree that he returns to many times, using it differently depending on the season, the weather, or the year. In the wintertime, he fills its cracks with snow; in the spring, he paints its trunk a brilliant green using layers of new leaves.
“You think: What else is here? What else can I see? Suddenly you find something that is so big and so obvious that you wonder, how did I miss it? You realize that you’re still not seeing much, there’s always more to be seen and understood,” he says.

5. Trust the ones you love “I had always wondered, living in a rural place, how come a farmer’s children so often become farmers?” Goldsworthy ponders. “When I was growing up, the last thing you would do is work with your parents. I never imagined it would happen to me.”
Yet as we see in Leaning into the Wind, Goldsworthy is frequently joined by his daughter Holly, who, after finishing art school, began assisting her father on some of his projects. After all, our family often knows us best.
There’s a moment in Leaning into the Wind when Holly climbs onto her father’s shoulders to affix a slender line of plant fiber to a high branch of a tree. The pair seems to teeter unsteadily for a moment, but then the elder Goldsworthy pushes up his daughter’s feet, raising her even higher into the tree’s crown.
“There is an understanding that can happen only between children and parents. It can also lead to huge misunderstandings, but when it works it can be quite incredible,” Goldsworthy says. “It’s that sense of having another pair of hands.”
Ariela Gittlen
Related Stories

How Creativity is Measured—And Why It’s So Difficult 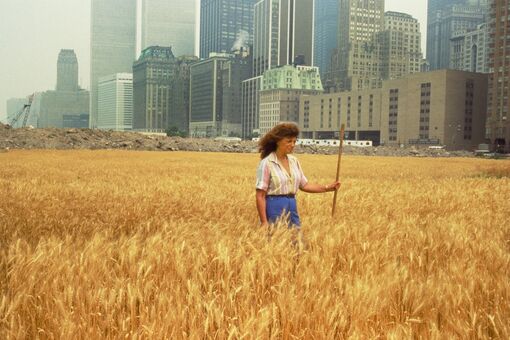 How Creativity is Measured—And Why It’s So Difficult
Isaac Kaplan
Feb 26, 2018